Scott worked, I was lazy, Cevonne came over

By Scottie and Brooke Tuska August 07, 2011
It's been one week in our local challenge and things are a little tougher than I thought. 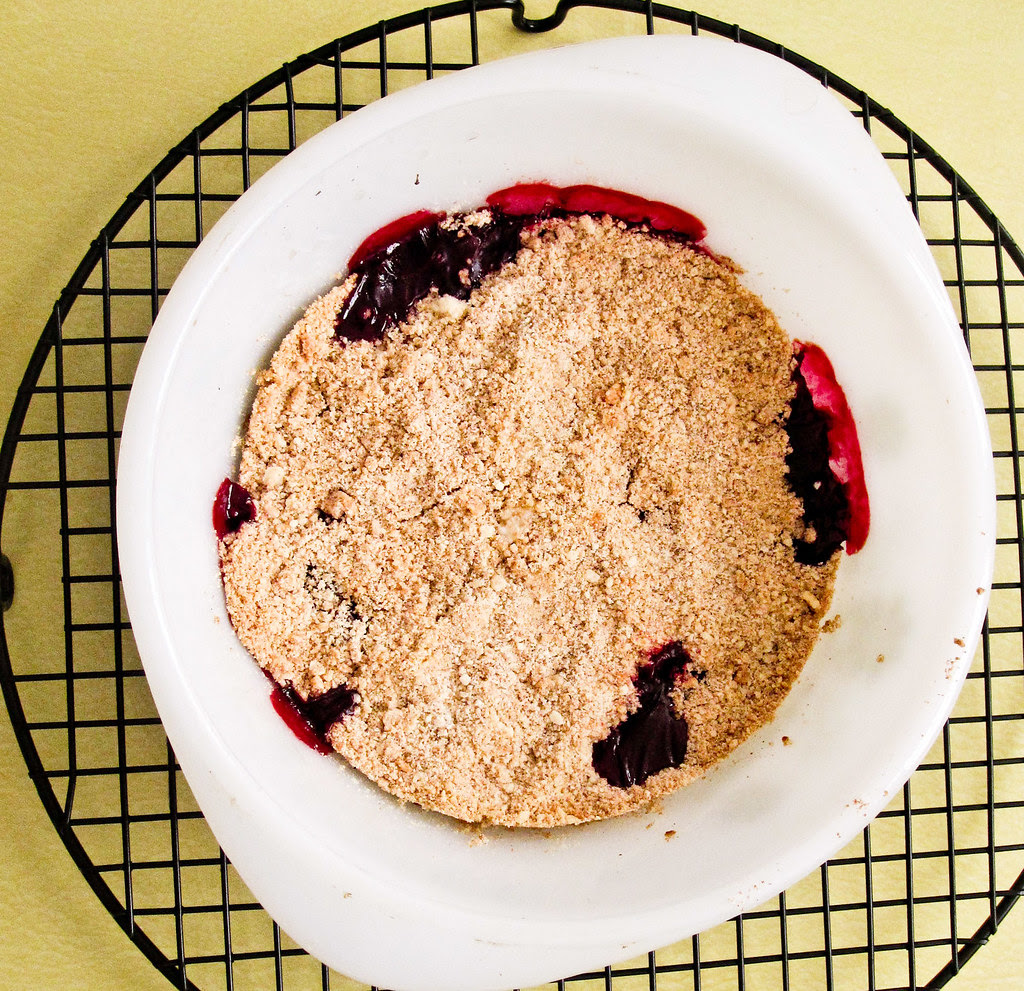 I wanted to buy some fruit and the only local ones the coop had were apricots and currants. I never had currants before and had just talked to my Grandma who mentioned she had them on her farm growing up. So they must be good right? Wrong! They taste horrible. Unless I happened to buy a bad batch or something. I figured the only way to make them better was add a bunch of sugar and make a crisp. 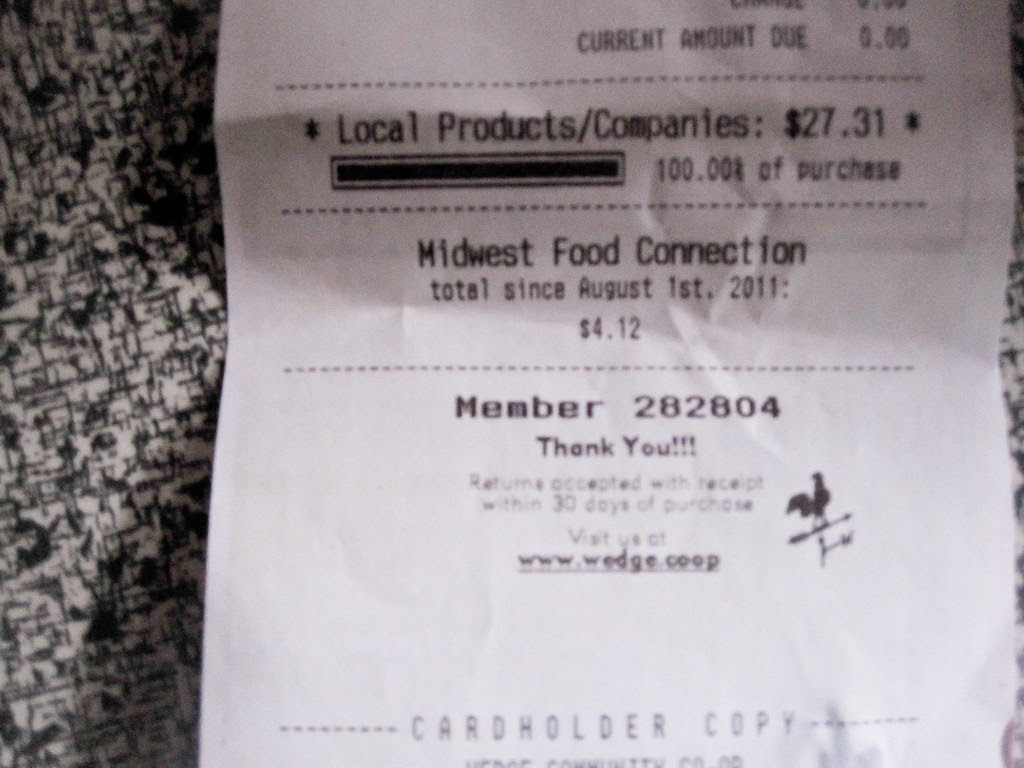 I did buy groceries for the week and they were all local. I like that the Wedge has a tally on their receipts.

I attended a party on Saturday where I was asked to bring chips and orange juice. The chips I had no problem with, but orange juice. Well, at least its from America.

Scott's phone plan expired and it was time to get a new one. The one he ended up getting was free for one day. So technically we didn't buy it so it doesn't count, right? 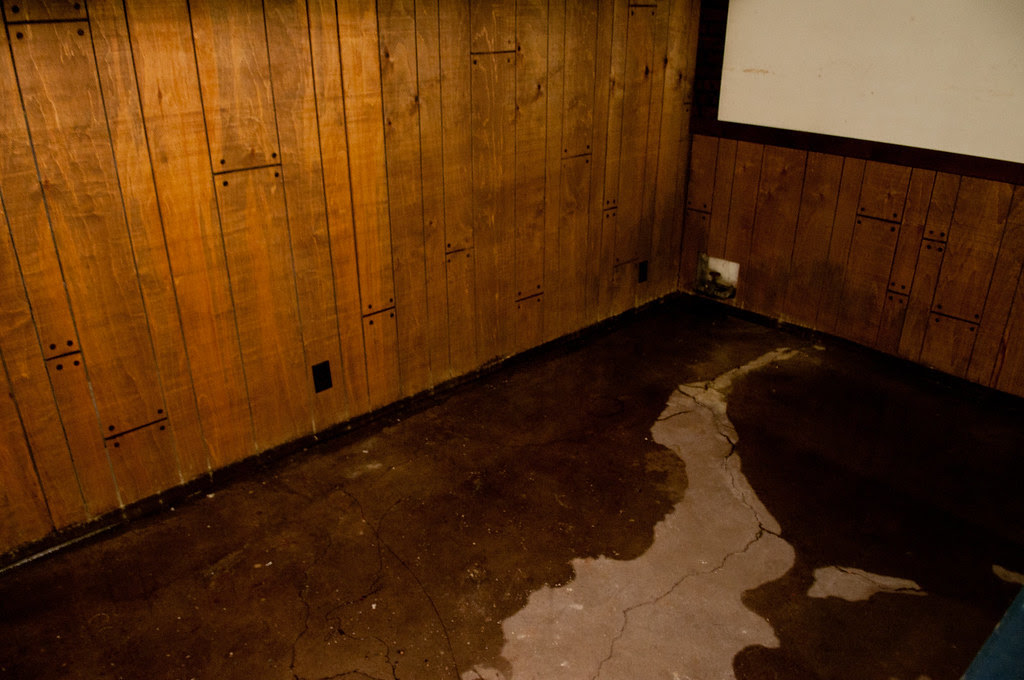 Besides local August, things have been pretty boring around here post-art show/Blake visiting. We had another major thunderstorm and this is what I woke up to on Sunday.With our dehumidifier running this was dry by days end. 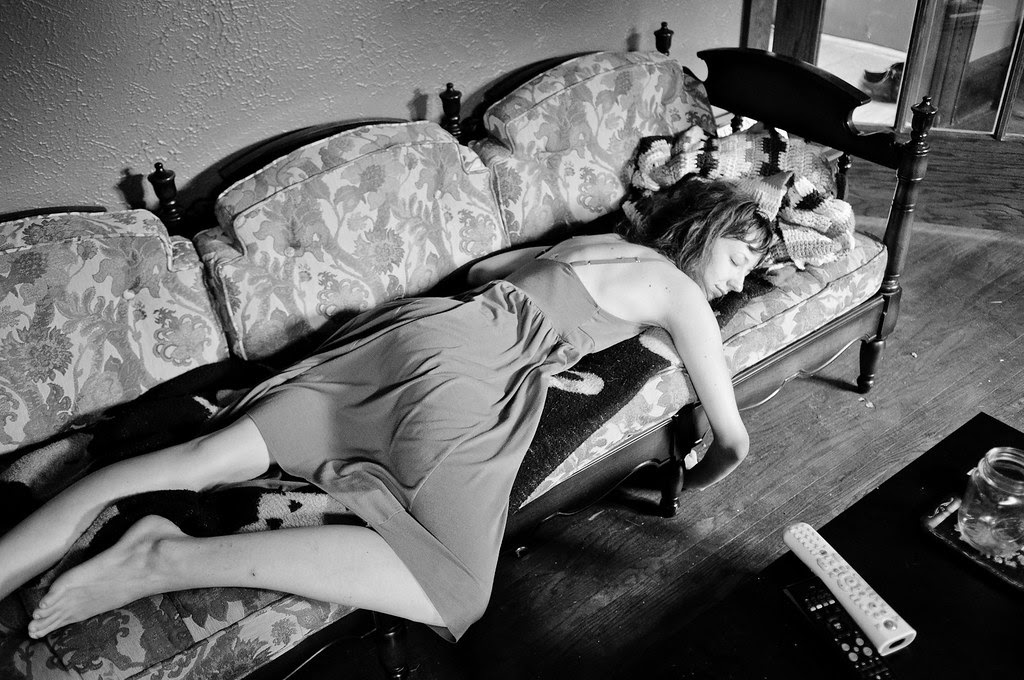 Recently Brooke's been making me cook Sunday breakfast. She was tired or something. 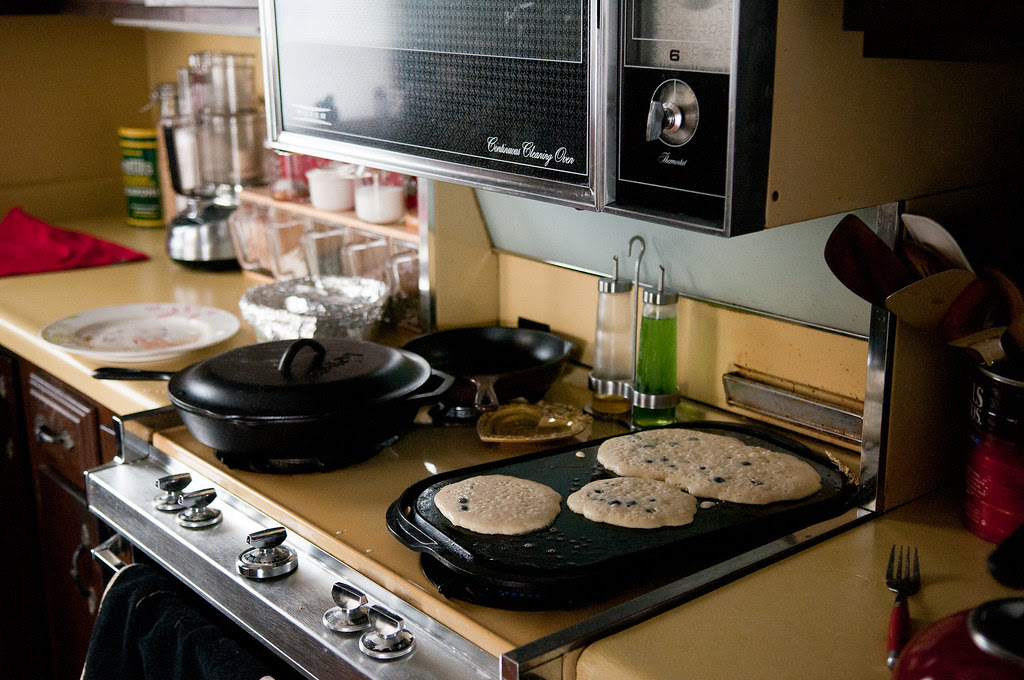 The most exciting part of my day. We used up the last of the blueberries from Brooke and Blake's berry picking adventure. Then I went to work. How exciting? 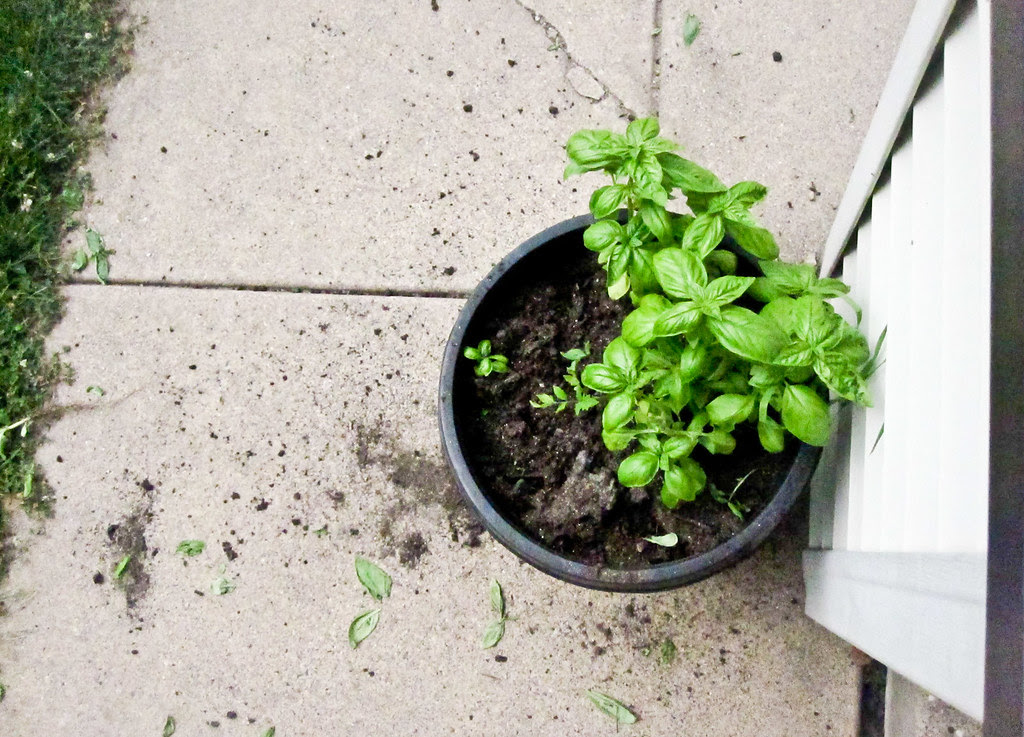 The neighbor kids (bless their hearts) have been coming over a lot lately. Sometimes I need to get things done so I don't answer or pretend I'm not home. Today they knew I was home and wouldn't stop knocking on our door. Eventually they got bored and left. When I came outside I saw that half our basil plant had been torn out. Little punks are grounded from our house. 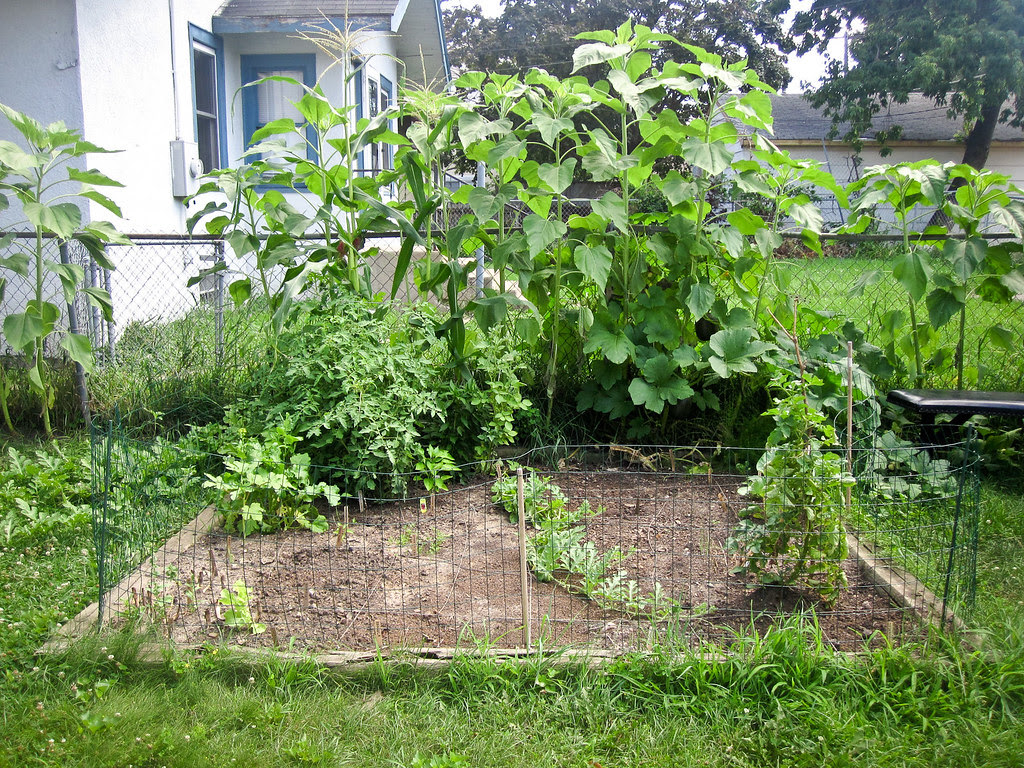 This week I replanted spinach and arugula. It never grew in the spring so hopefully it will grow this fall. 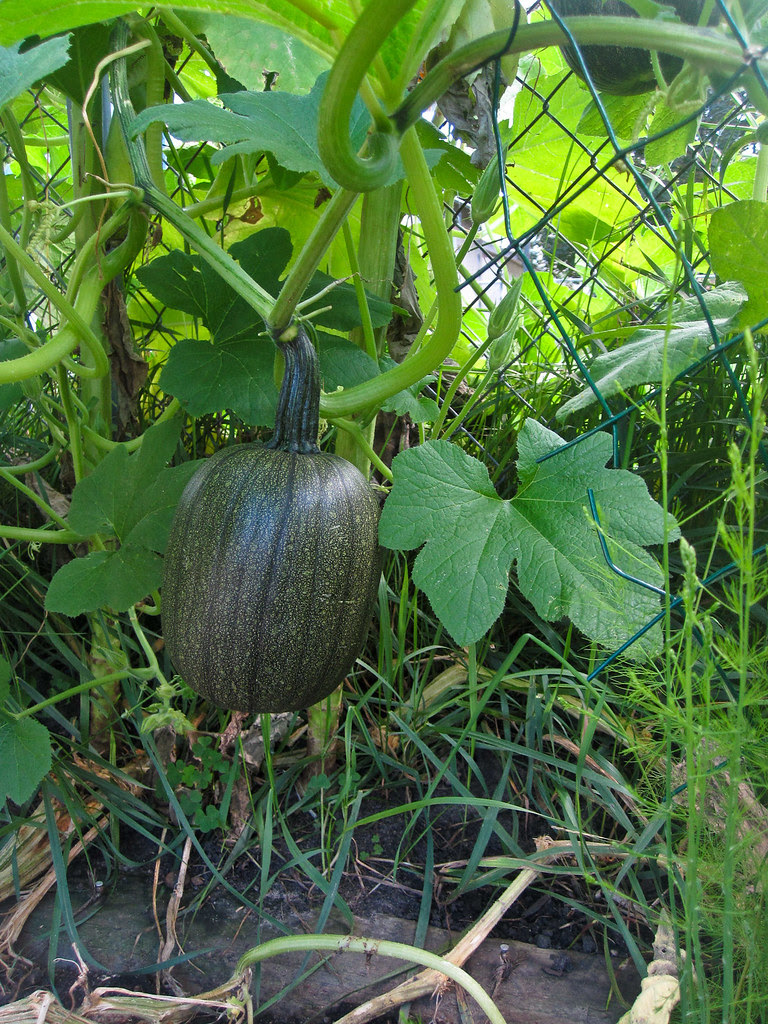 Pumpkins are getting bigger. 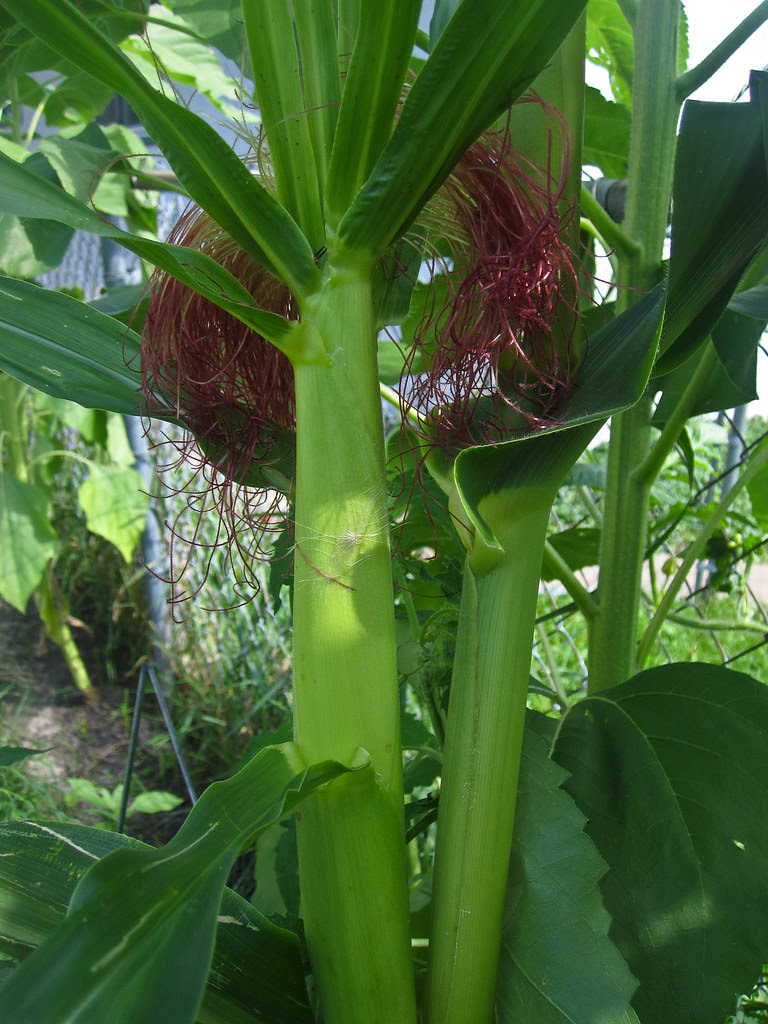 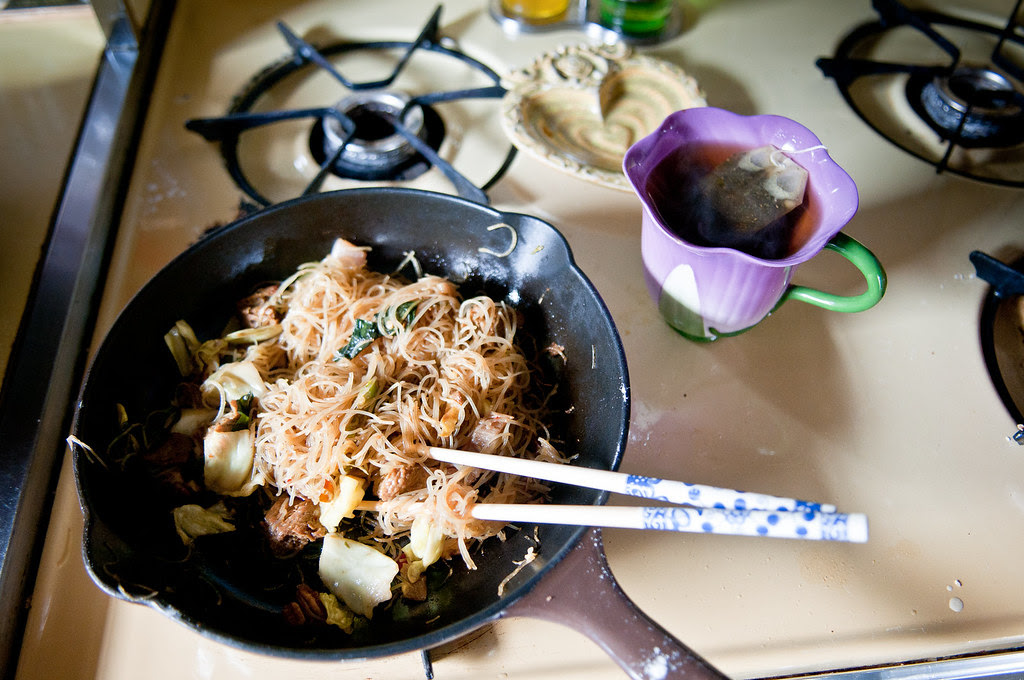 I had leftovers for lunch. This has been the summer of stir-fries. 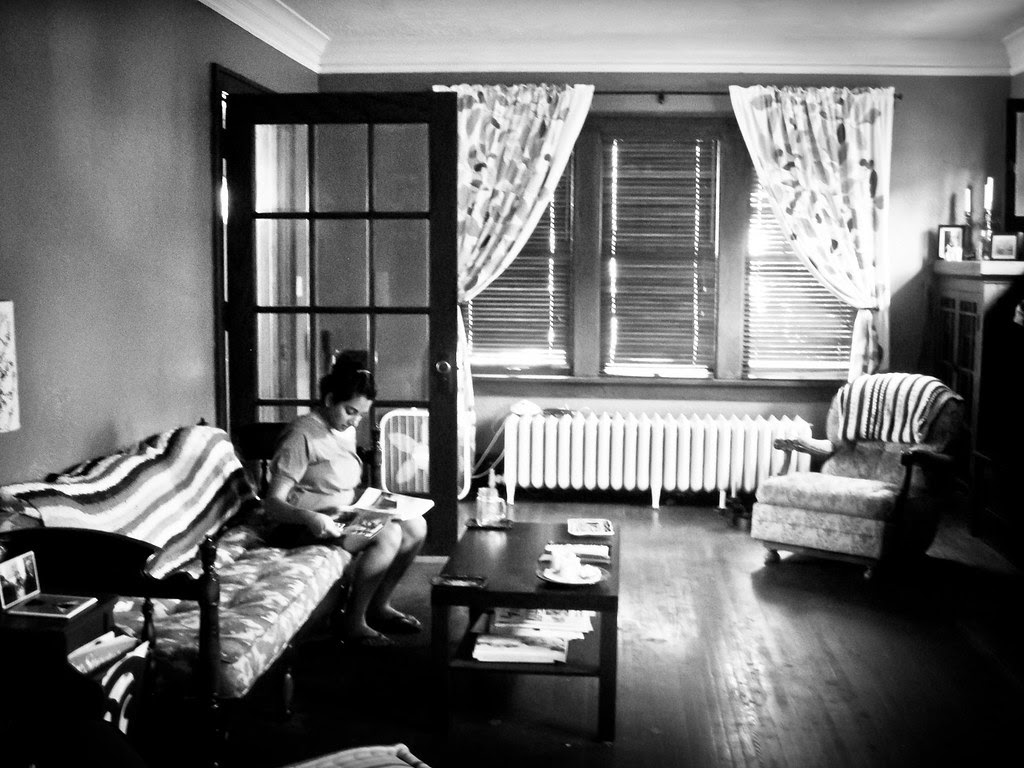 Cevonne and I had plans to hang out today. Scott had the car so she offered to pick me up. She hasn't seen our house since we moved in so I invited her in for another tour. 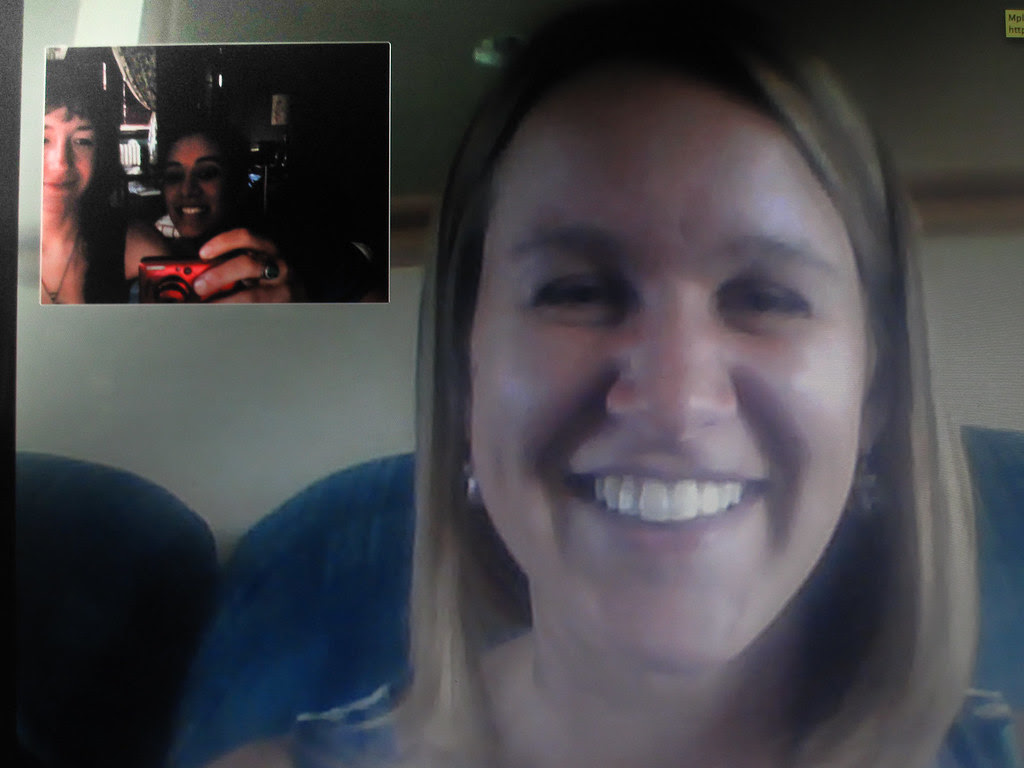 Lately I've been obsessed with Skype. We decided to Skype with Amanda. It was fun. I don't know how to capture my screen so I had to take a photo with my camera. 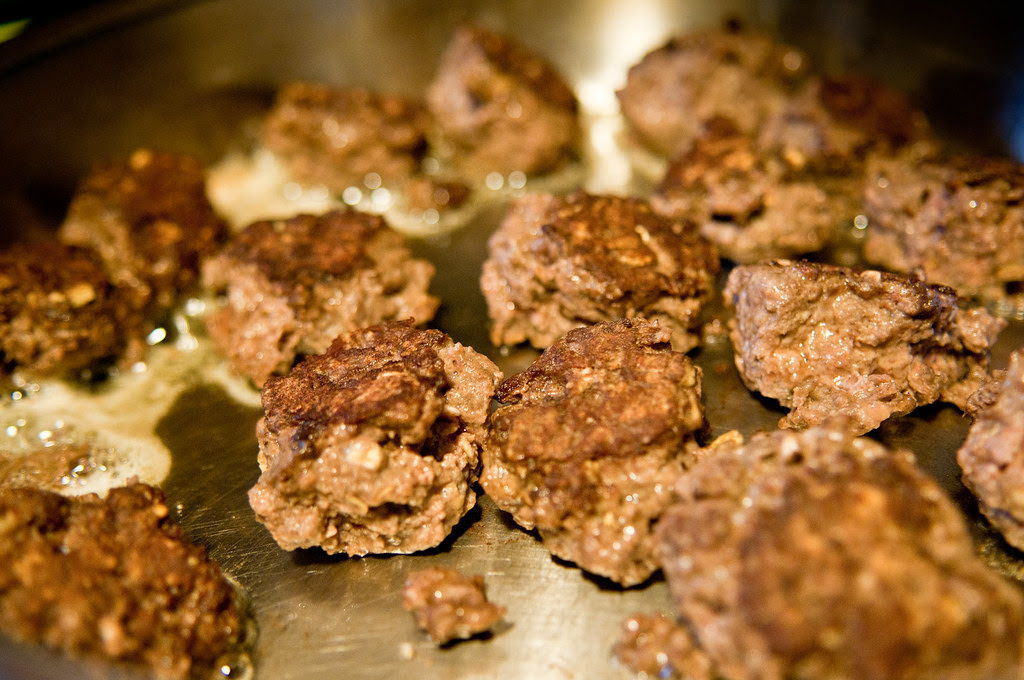 I missed the Skype action. I always enjoy hanging with Cevonne and Amanda, so it was a bummer.

We've been sticking to what we have in the fridge or the pantry for dinners lately. I made another Tuska family tradition, Swedish Meatballs.

Combine the ground venison, crushed crackers, a healthy amount of allspice, the egg and enough milk to moisten the mixture. Mix with your hands. Meanwhile prepare a rice of your choice.

Melt butter with the oil in a thick bottomed frying pan that has a lid. Shape the meatballs into balls and put in hot oil. Turn after the meatballs have browned nicely.

Combine the corn (or potato) starch with some of the stock. Add the rest of the stock to the pan when the meatballs have browned on the other side. Once the stock is boiling, add the corn strach and beef broth mixture. Cook until thickened. Serve over rice.

If you're feeling adventurous replace the corn starch with flour and remove the meatballs after browning. Create a roux by scraping up the browned bits. Add a few tablespoons extra butter and two heaping tablespoons of flour. Then whisk in the stock and sour cream.

The first version of the stock is the way my mom and grandma make it. The second is an adaptation of a recipe from Bon Appetit for Finnish Meatballs. 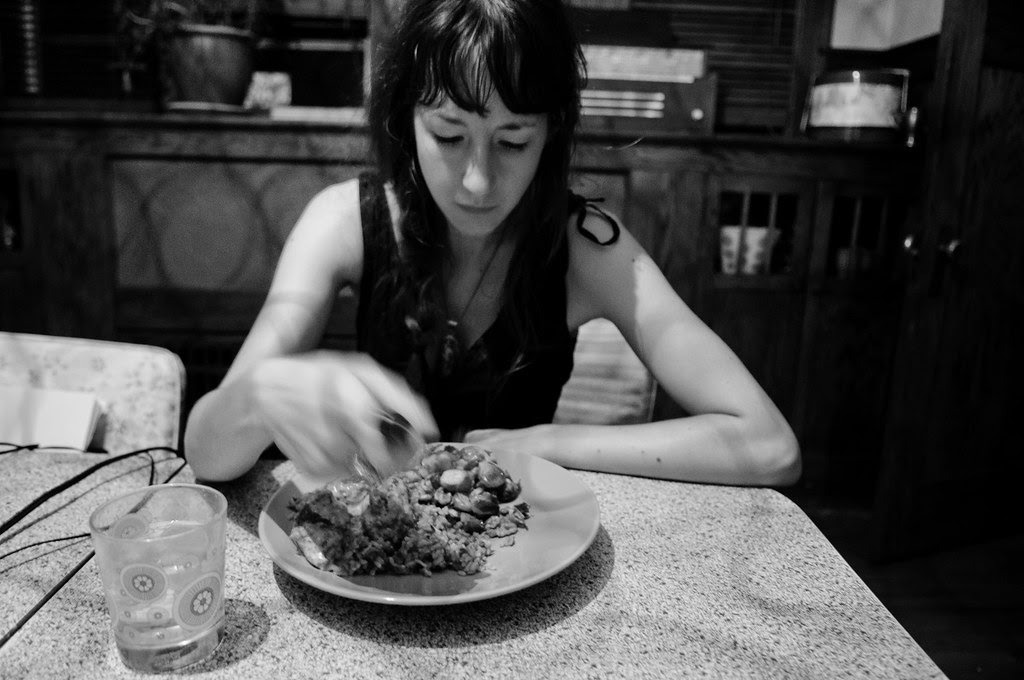 We had no crackers or bread crumbs. Instead we made the meatballs with flour. The meatballs lost their delicate consistency. Eh, whatever.

Amanda said…
I do NOT like the photo of the skype date...its way to close! I liked the title of this one :)
I forgot what else I was going to say...I wish I could comment like I do on FB where you can comment in different spots.
8:00 PM, September 09, 2011

By Scottie and Brooke Tuska December 01, 2018
While driving through the Linden Hills neighborhood with the trees all lit, Meadow said, "It's beginning to look a lot like Christmas. Oh that's what the song means!" Since it was the weekend after Thanksgiving we had to make that a reality. We decorated our little place with the Christmas decorations that made the cut in our downsize. You didn't think we'd get rid of our collection of nutcrackers? Did you? My good friend and realtor Nate invited us to his companies Christmas party. Meadow was super excited. Upon walking in they had her favorite cutouts for photo ops. Meadow was also super pumped to pick her own cookies. First we ate said cookies. While waiting for our turn to see Santa Meadow wrote him a letter. Both kids did great. Though none of them smiled. Nate later asked me, "Is Santa smiling?" Indeed he was not. We were number 87. I'm sure he was done with smiling by number 50.
Post a Comment
Read more

By Scottie and Brooke Tuska February 14, 2021
Along with Meadow going back to school and needing masks, I also made her some headbands and attached buttons to hold the straps.  Perfect so her little ears don't get hurt. The kids requested Chocolate Rye Pancakes for this Valentine's breakfast. So sweet. In two ways. I guess Brooke got Meadow a Valentine's shirt. Nope, I got her the fleece lined leggings with hearts on the knees. She already had the shirt. Mmmm...the kids' favorite. You know it's cold outside when you can't see out the window.  Meadow was up to her crafty self and made Theo a batman mask. She made a wrong cut and patched it up otherwise it looks awesome. I made Brooke some peanut butter-peanut butter cup-chocolate ice cream for Valentine's day. It was delicious. When you live in a small place your bedroom becomes your sewing room. I also prefer sewing standing up.  I'm not sure if she's complaining, but I love our small footprint condo lifestyle. Do not miss our big old house. N
Post a Comment
Read more

Sisters, a Brother and Walking Chicago

By Brooke June 08, 2012
Summer always seems to mean one thing: weddings. Whether I'm shooting or attending, we're bound to end up at a few every year.  This time around we were heading down to Chicago from my big sister Katrina's nuptials. I feel like all our vacations are centered around a wedding or something wedding related. I wish we could go on a vacation without having to worry about being somewhere.   It also means a few repetitive trips down I-94. There aren't nearly enough unique stops off the interstate. One outlier is Foster Cheese Haus , the only organic Wisconsin cheese shop I know of. Run by the folks behind Castle Rock Organic Farms , we always try to stop by. Unfortunately for us they were closed on Wednesdays, but at least we got to spy on their darling garden out front.    Brooke and I arrived in Necedah. We decided to stop at Brooke's sister Brittany's home along the way to cut the ride in half and get her dressed hemmed.   In
4 comments
Read more