2 Weddings and a Cake 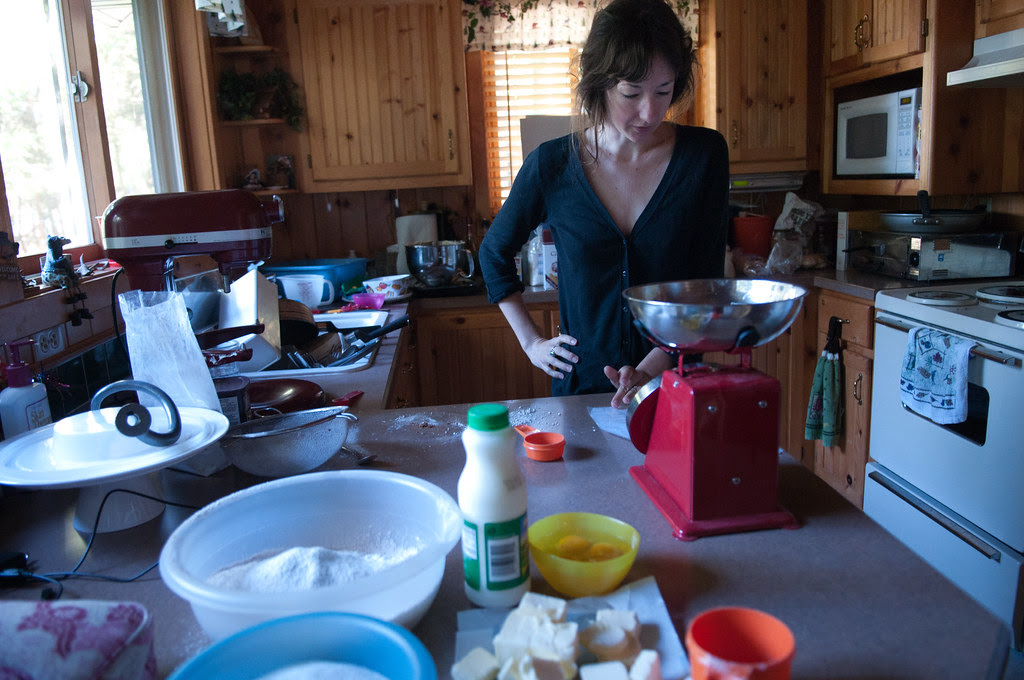 Brooke woke up bright and early two days before the wedding. She had to whip together a three tier white cake and chocolate and red velvet sheet cakes.

I woke up not feeling any better. Actually I slept horribly. I woke up around 6:30 in so much pain. I took a few ibuprofen and slept in my mom's bed that had a heated mattress. At least I could stand up straight. 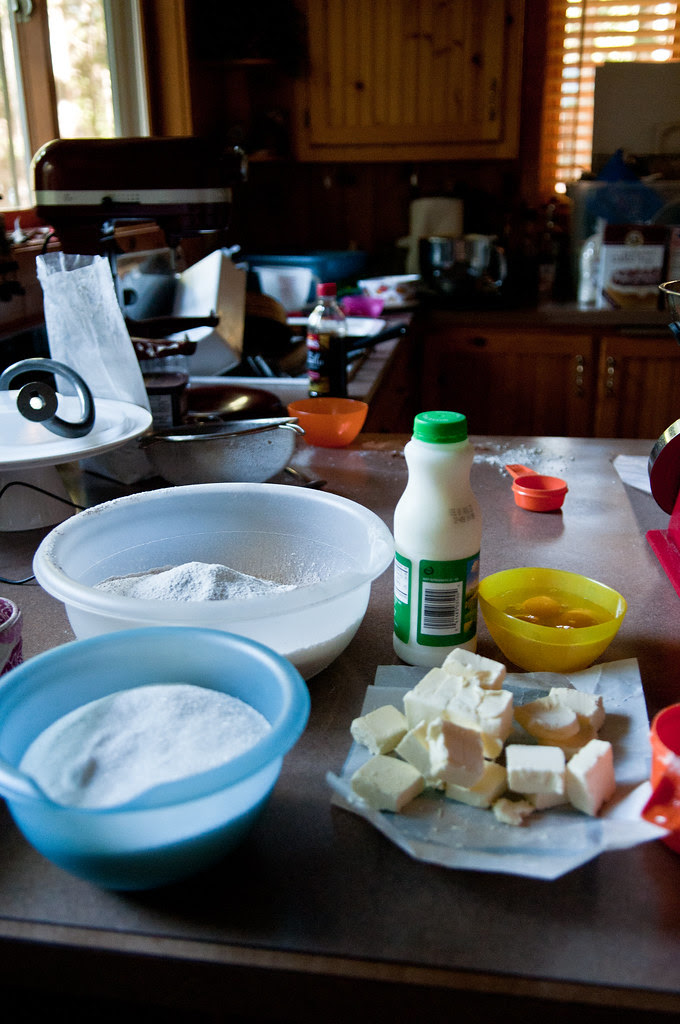 The kitchen was taken over by mounds of butter, a ton of sugar, way too many eggs (but still not enough) and flour all perfectly divided for each cake. 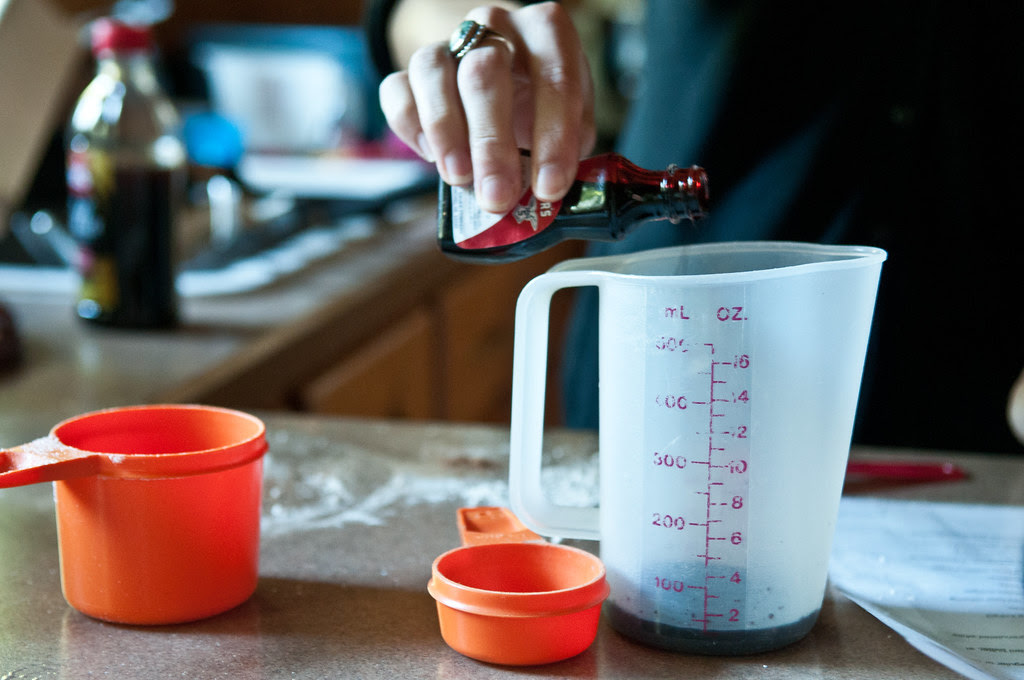 People are always very excited for red velvet. The secret ingredients are red food coloring and cocoa powder. Not as appetizing as it looks, eh?

I try to stay away from using too much food coloring. When I made my cake tests I tried using beets to make the red color and wasn't very successful at it. 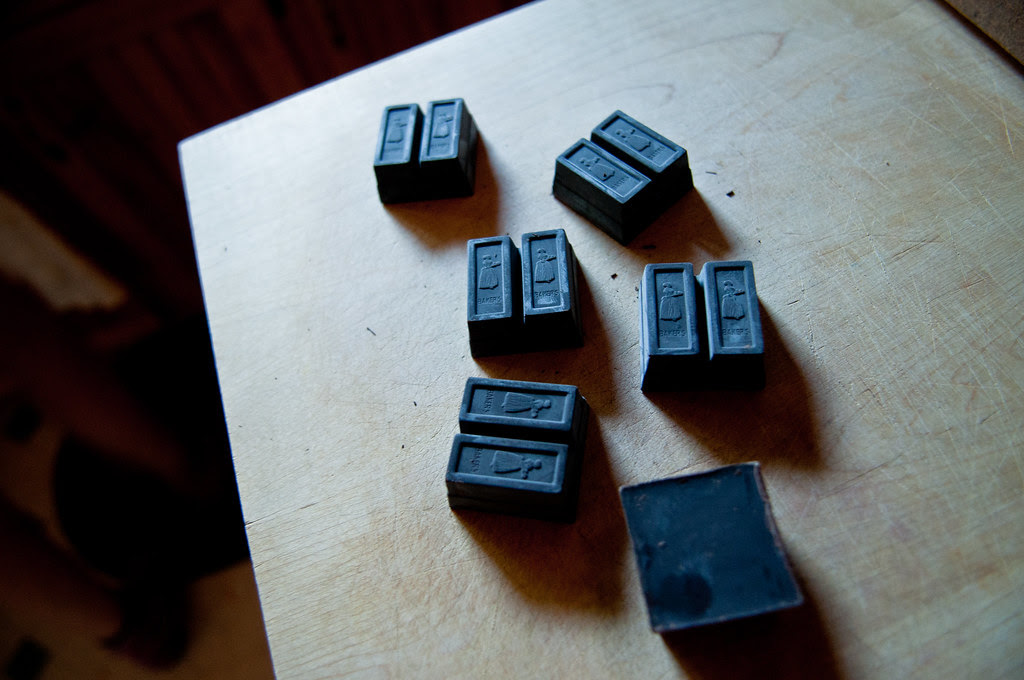 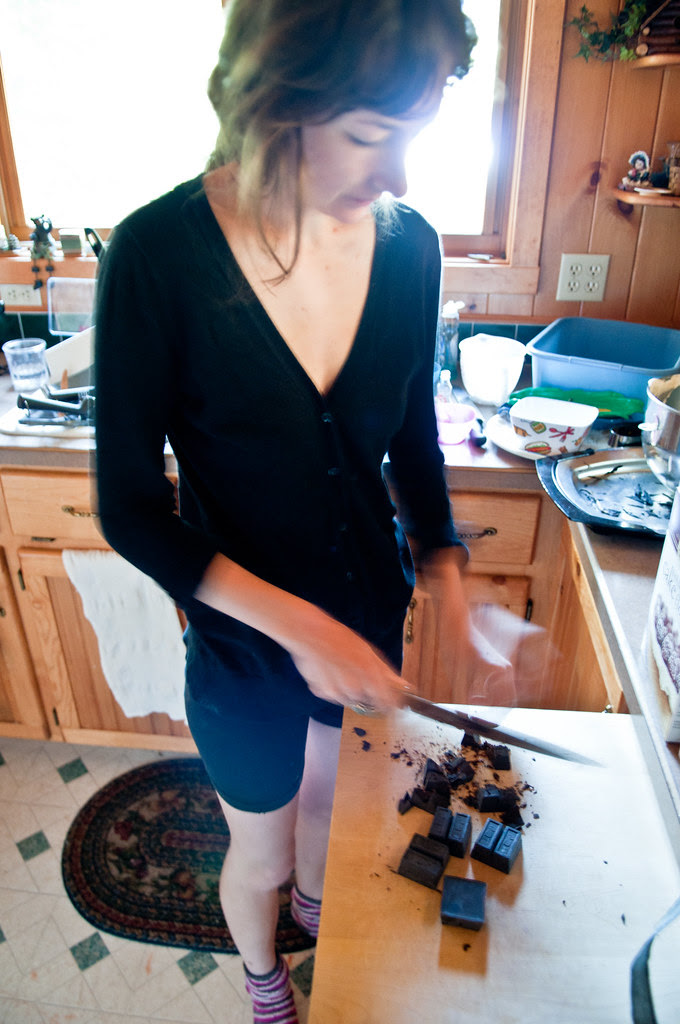 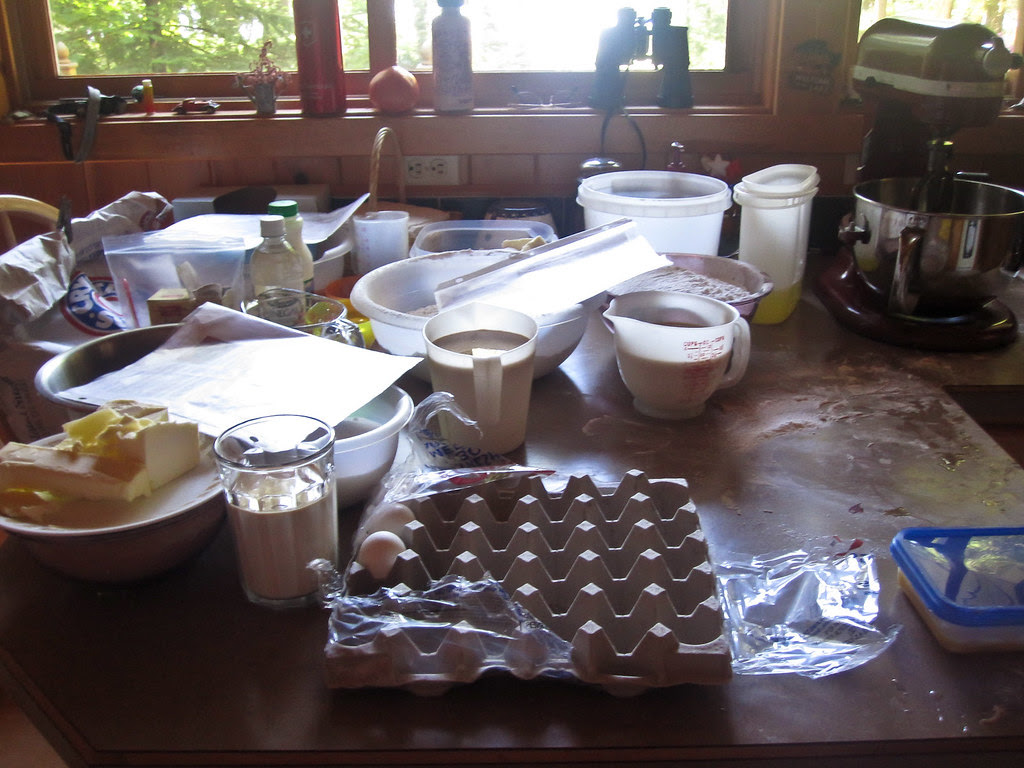 I worked on the cakes while Scott played out on the lake all day. It was the first day all week with no clouds in the sky or any wind. It was the perfect day to be outside and I was inside baking all day.

Well, I couldn't have played all day. Look at all the pics I took. 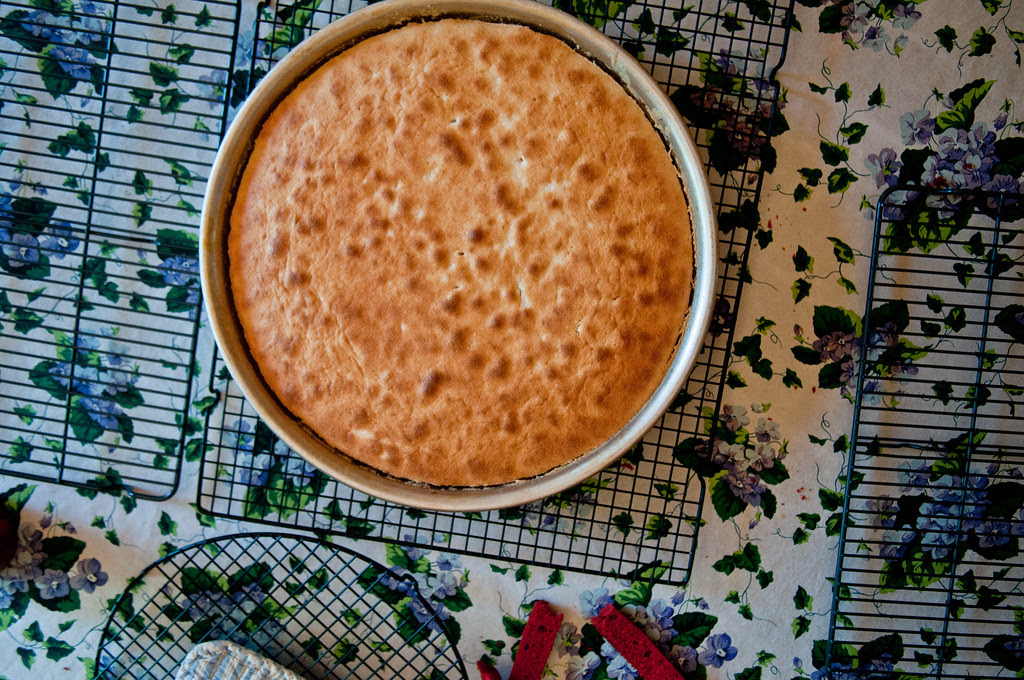 Kidding aside, I had a fun day lounging in the water and kayaking around the lake. I do not want to get in Brooke's way when she bakes cakes. It's just not a good idea. 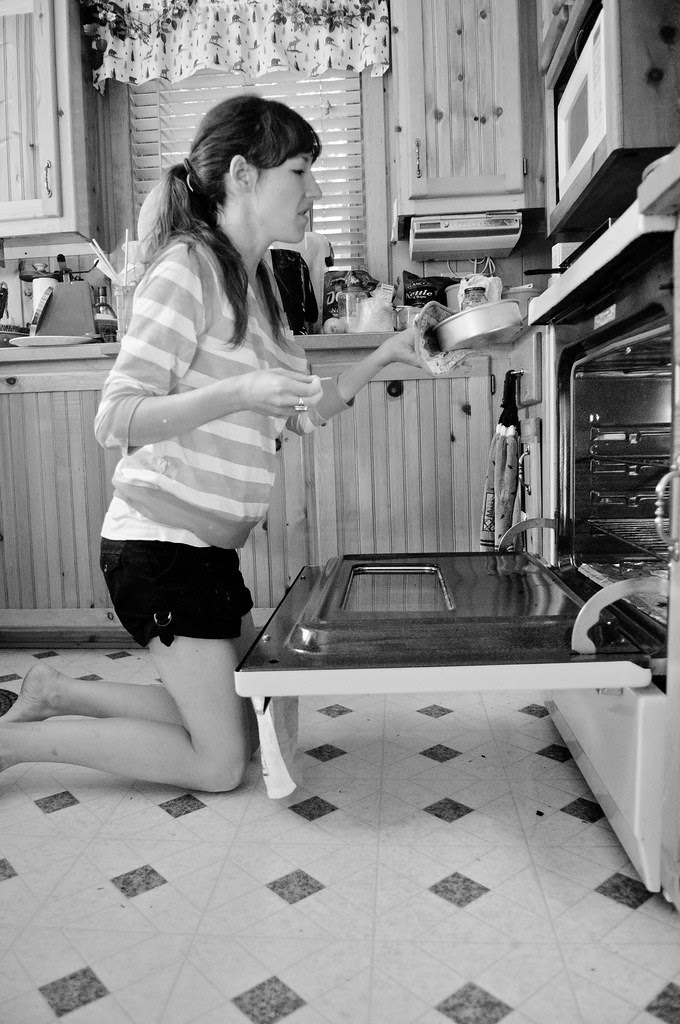 Apparently customers at Nordic Ware come in complaining that their cakes aren't perfectly white. That my friends is called caramelization.

I was explaining this when he took the photo. Hence the weird face. 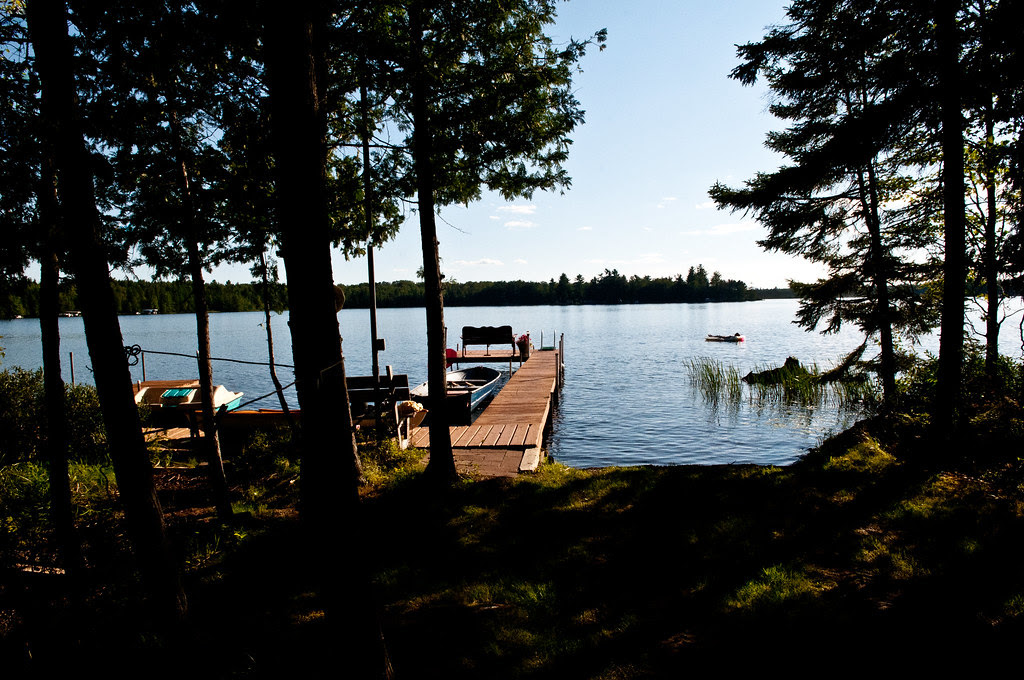 Despite her bad back, Brooke eventually made it outside to lounge on the air mattress. The only problem was she couldn't get back up out of the water. I had to drag her to shore like a beached whale.

I knew it was a bad idea, but I didn't want to miss out on the beautiful day. 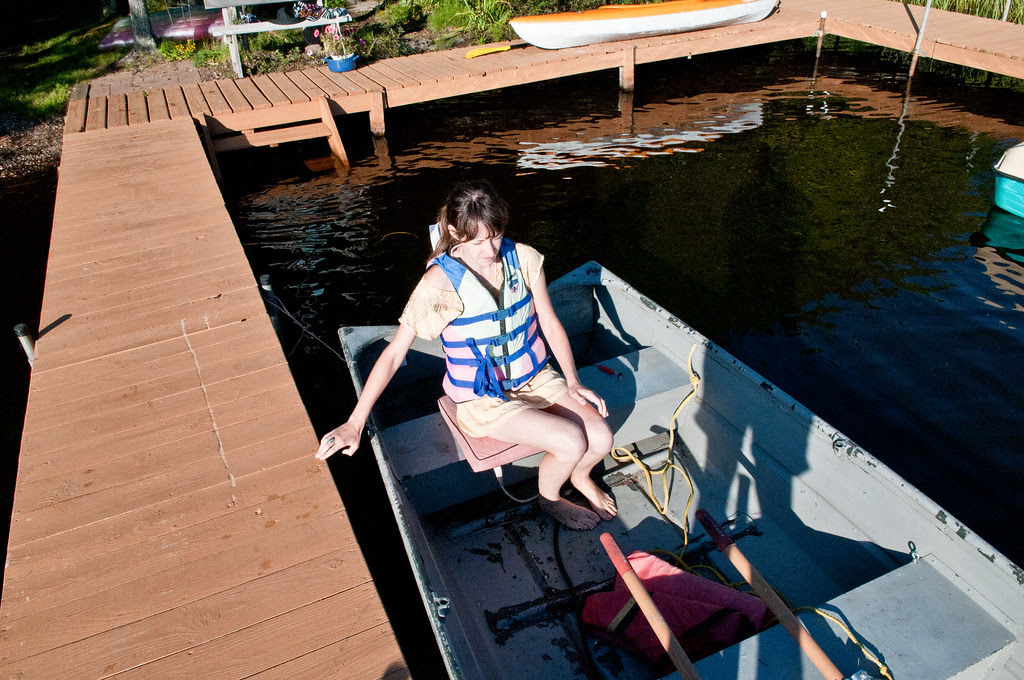 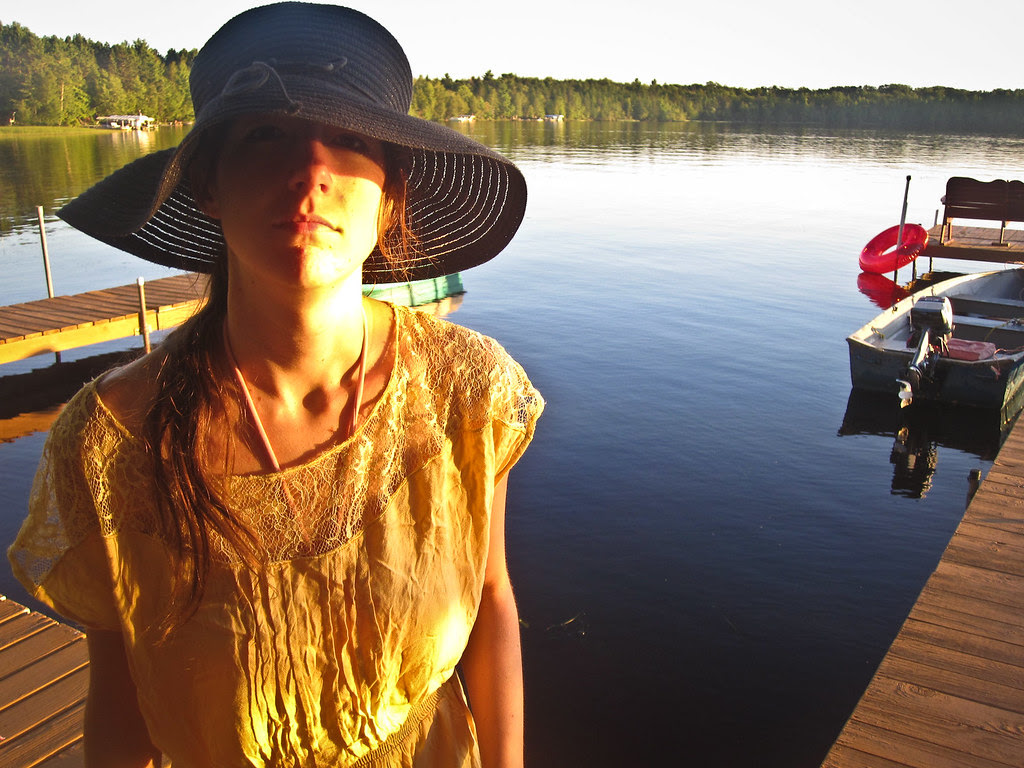 I even made time to take a break for a boat ride. Although sitting in the boat made my back worse and I was back to walking around like Quasimodo.

It really was a beautiful ride even if the little fishing boat chugged along. Sorry kids, no pics. 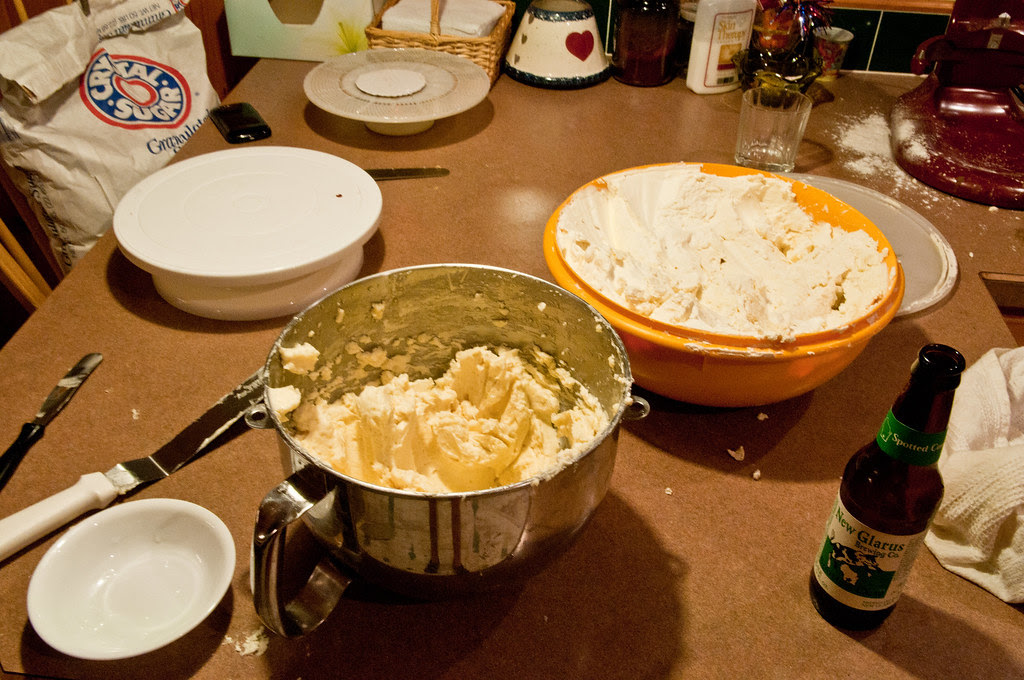 I noticed that the frosting had turned yellow. When she whipped it up it didn't look any better. She'd have to make a whole new batch for the main frosting 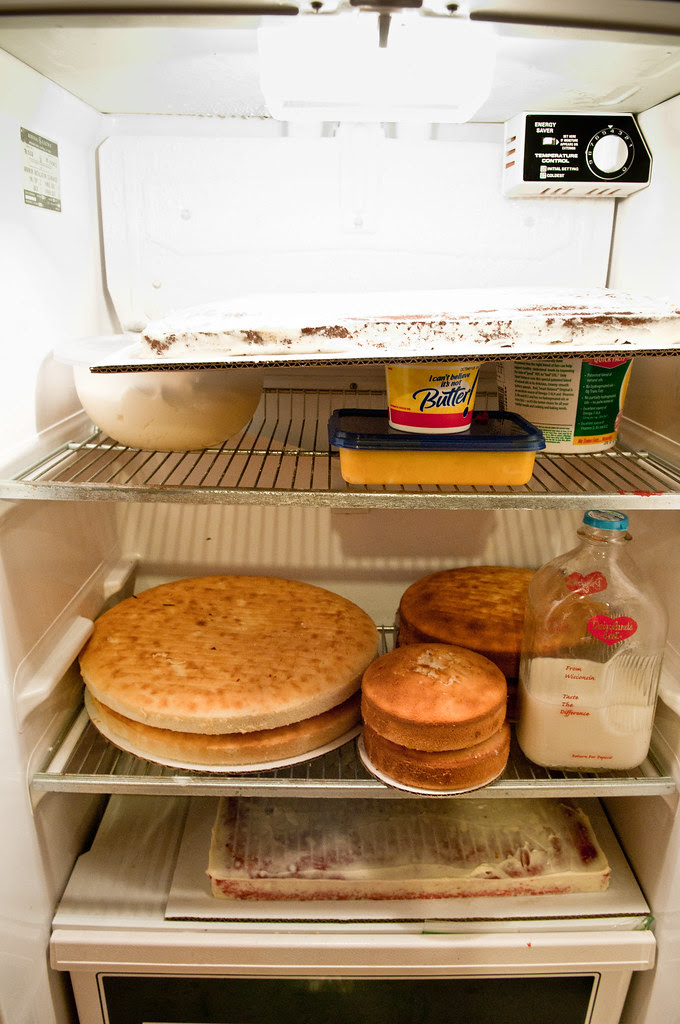 The fridge was full of food when we got here. I feel like all I did was eat this week. 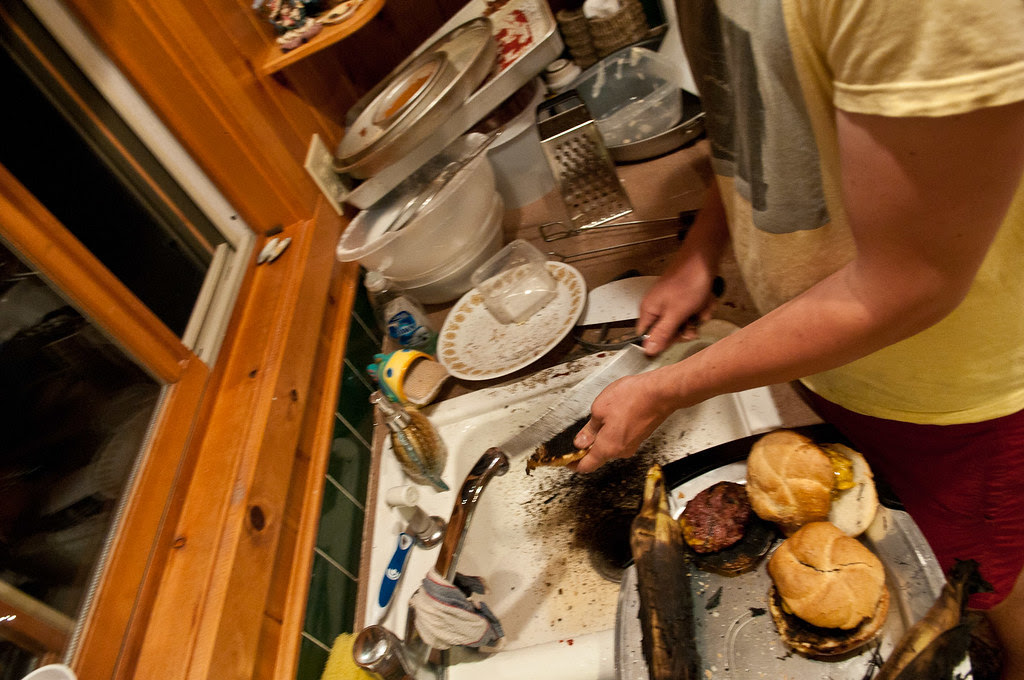 While she dirty frosted the cakes I grilled up some burgers and corn. I may have overcooked the buns.

As you can see it was dark out so I don't blame him. 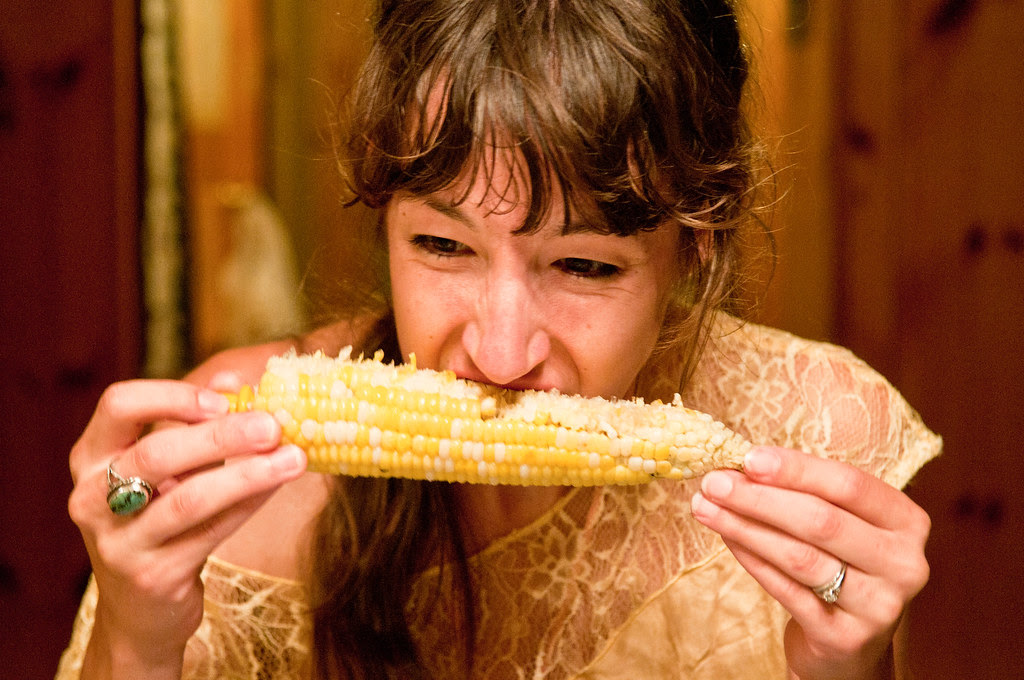 Brooke devouring her favorite food in the world.

I wait all summer for this so I eat as much as I can. 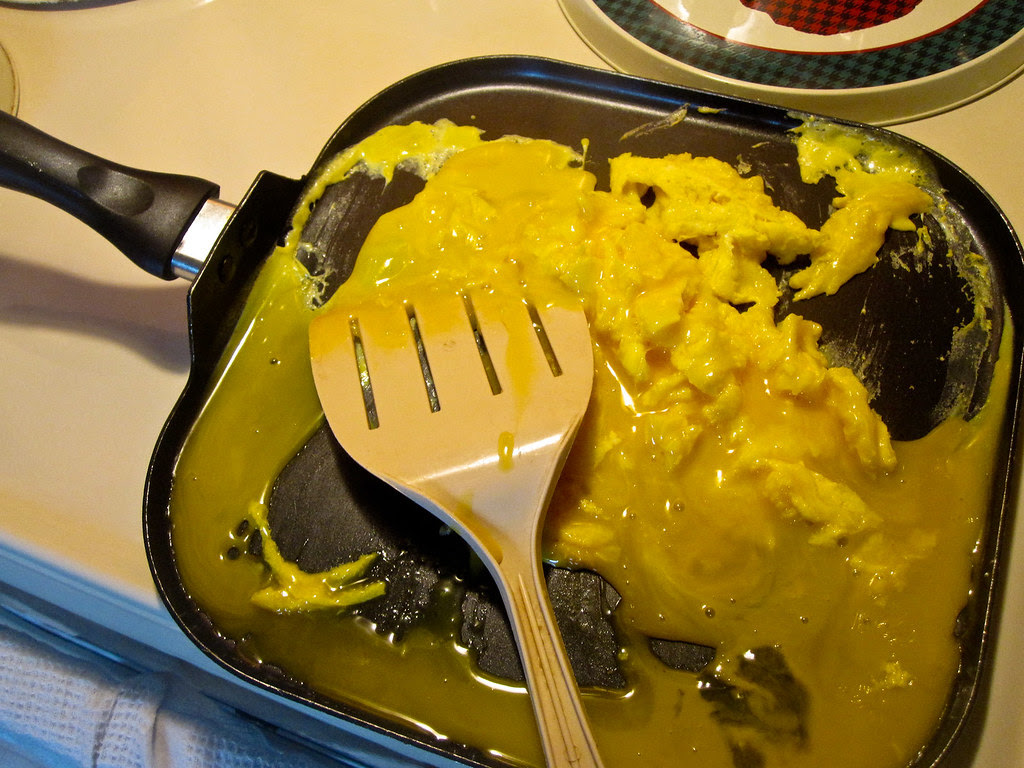 With all the egg whites I needed for baking we were left with tons of egg yolks. Scott made scrambled eggs with about 14 egg yolks the next morning.

It was...interesting. I had originally planned to eat bacon and eggs on Thursday. Brooke had already frozen the yolks. I ended up eating all meat for one breakfast and only eggs on Friday.

I finished frosting the cakes. 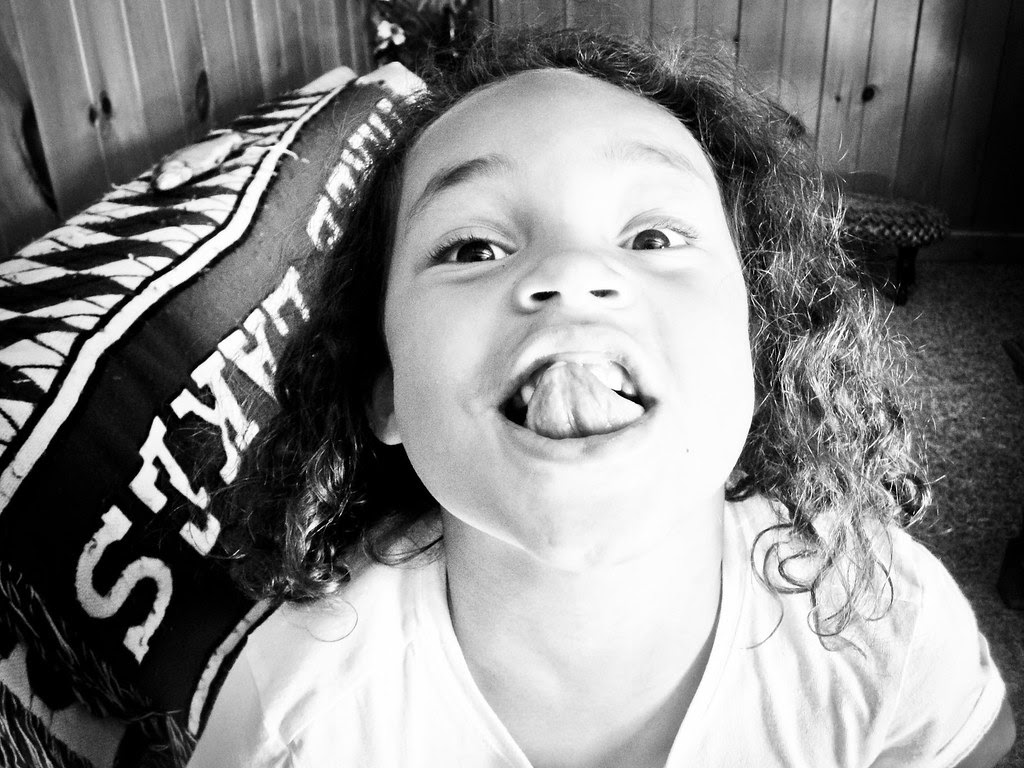 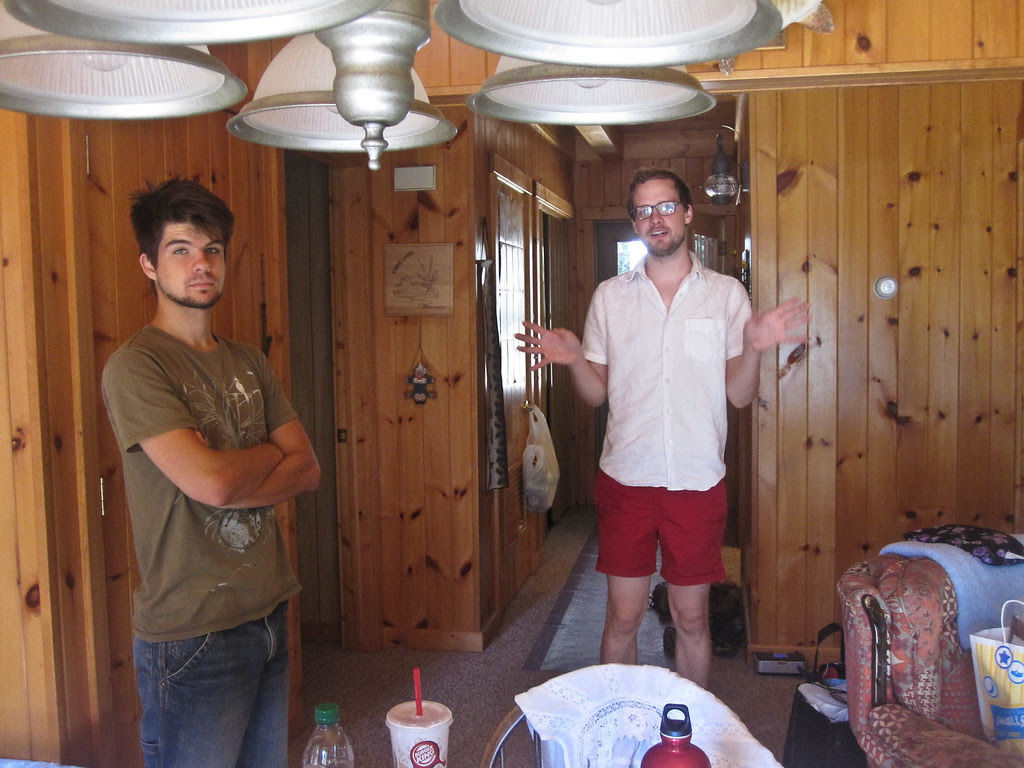 Then our quiet week ended when my entire family and then some, came all at pretty much the same time.

After everyone got ready we drove about an hour east to Goodman for my sister Chelsea and Dan's rehearsal. The ceremony was held at the county park. It's about a 10 mile drive on gravel road.

It's was like a rally race, dust clouds were kicked up in the air blocking out the distance in a fog of limestone gravel. The best means of navigation was the gps. I became the worst back seat driver. Sorry, Jeff.

We practiced for their big day. Including Scott who is the official wedding photographer.

Official is key descriptor. The more I shoot wedding the more I notice either a few or ten guests with SLRs. Of course it takes more than a good camera.

I really like taking photos of the in-between moments.

My mom loves directing people and yelling at people because they "walk too fast".

The lighting was so perfect during the rehearsal. Of course the next day we'd have strong shadows, which meant a lot more work for me.

We then headed to the park building to decorate. One of Dan's relatives owns a sugar camp so they had little bottles of syrup for  favors.

Blake decided to examine the syrup like a scientist. He decided it was a form of sucrose.

Everyone helped out (except me) and made the place look pretty darn good. Chelsea could be a wedding planner. 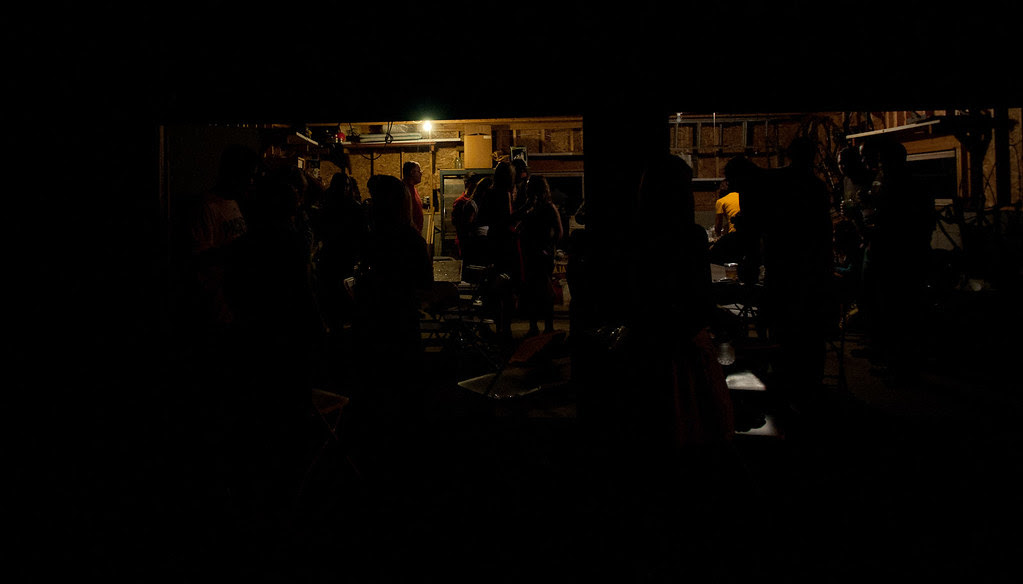 We then headed to someone's garage for a potluck dinner and beer.

After everyone in the wedding party got presents from Chelsea and Dan we headed back to Three Lakes. We all needed a good nights sleep. There was a lot of work to do on Chelsea's wedding day.

Amanda said…
I have started commented as I read the blog so that I get to comment on each picture I want to say something about! Good plan, huh?
I LOVE the outfit you were wearing in the fifth photo! Very stylish. Sorry you had to miss out on such a beautiful day but I’m sure Chelsea appreciated her beautiful cake! :)

I did not know that you were having problems with your back.
OH! Spotted Cow!

Good job with the buns Scott. I did not know that your favorite food was corn on the cob Brooke. We get it all the time and grill it! So good!
7:21 PM, September 22, 2011

By Scottie and Brooke Tuska October 14, 2011
Brooke and I aren't traditionalists. We didn't want to sit through a half-hour ceremony, but we also didn't think eloping was the answer. One thing that we did do was spend the night before the wedding in separate houses.   Even though Scott came with me to pick out my dress I still didn't want him to see me before the wedding. I had to keep one tradition. I woke up early to meet Brooke's dad at the Theodore Wirth Picnic Pavilion, only to find out that he was meeting me a couple hours later. I ended up getting most of the decorations over to the venue with my dad, sister and Dennis.  Scott had texted me in the morning, "I'm supposed to merry your dad right now right?". I was like, merry my dad? What he meant to type, but autocorrect corrected for him was meet.  Since Brooke came over to the venue to help, I spent most of the rest of the day with Blake, Colin and Olger. We ate some Pair of Dice Pizza and
4 comments
Read more

By Scottie and Brooke Tuska April 17, 2021
Another weekend, another hiking trip. This time Minneopa State Park. We started with the Hiking Club Trail . The Hiking Club is a great way to get the kids excited about our hikes. Rather than just going out for a hike they're searching for the secret password along the trail.   Where there's rocks Meadow will climb.
Post a Comment
Read more

An End of Spring Break Visit to the Three Lakes Cottage

By Scottie and Brooke Tuska April 11, 2021
Meadow's on spring break so a trip to the cottage it is. The weekend called for rain, rain, rain but we don't care.   We all brought along our rain suits just in case it never let up. Even with just a drizzle Theo put on his suit right away. I think this is the earliest I've seen the ice off the lake. Should have brought our swimsuits. Brooke used to always be the first one swimming as a kid. Maybe Meadow, Brooke and Theo can keep that tradition alive. Me? Probably not. Theo must think his rain suit is completely waterproof. He went well past his boots.
Post a Comment
Read more