A Brief Survey of the Nomi Home Tour 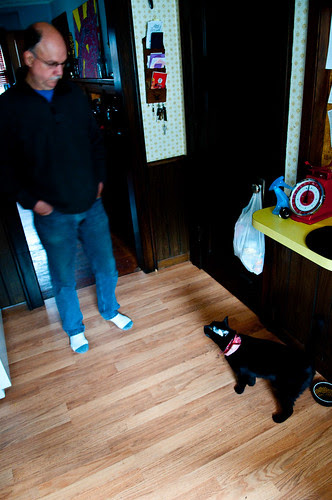 Scott's dad visited us this past weekend. So they got up early to work on the house. 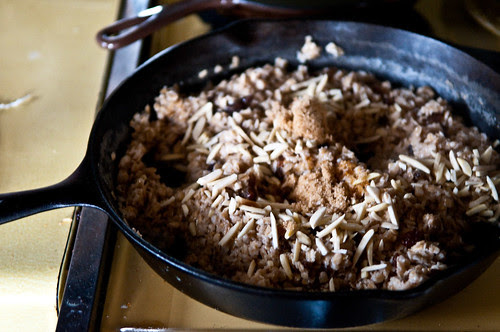 First Scott made me his grandpa's famous oatmeal, while I still slept.

Well, it's more like the haute cuisine version. When my siblings and I were young we'd stay at the grandparents house for a few days. My grandma has a green thumb like no other, but strangely I don't remember her growing vegetables. While grandma went out to the yard, grandpa would concoct the most wonderful oatmeal. It definitely had a lot of brown sugar, but I never have asked him the precise recipe. Here's my guesstimate.

"Grandpa Wojcik's Famous Oatmeal"
3 C Rolled Oats
4 and 1/2 C Water (or a combo of Milk and Water)
Golden Raisins
Slivered Almonds
3 heaping T Brown Sugar
1 T Blackstrap Molasses
Pinch of Salt
Honey or Agave drizzled on top
Simply parboil the oats in your choice of liquid for approximately 5 minutes. Add the raisins and cover when the liquid has come to a slow boil. Add slivered almonds and light brown sugar. Cover for about 8 minutes or until desired consistancy. If you'd like, toast almonds in dry cast iron skillet before adding to pan. Add salt to taste and serve with or without Honey/Agave. 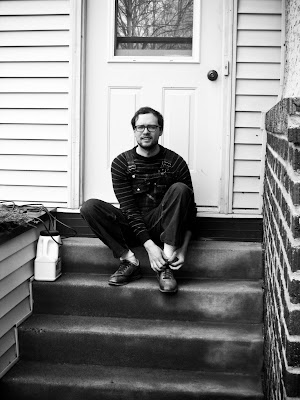 After breakfast they get to work while I cleaned up our garden. I was excited to find some green already sprouting. 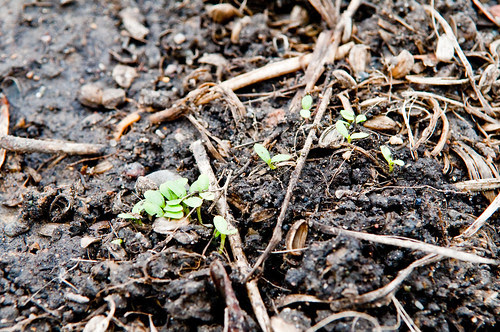 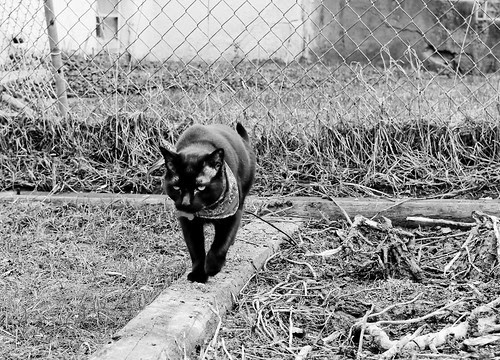 Peanut stood guard, while my pops and I lose our minds (and my hair). 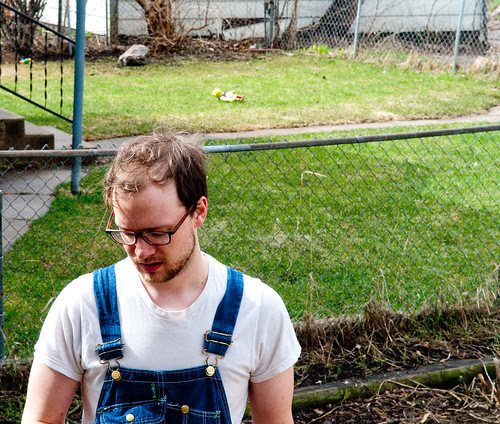 Last fall when we had some pretty brutal winds we noticed one of our knee braces had fallen off. We checked the rest of the house and saw that another one was missing too, but was no where in sight. Which made us wonder if it was there when we bought the house. These suckers weigh a good amount and are going to be a challenge to put back on. 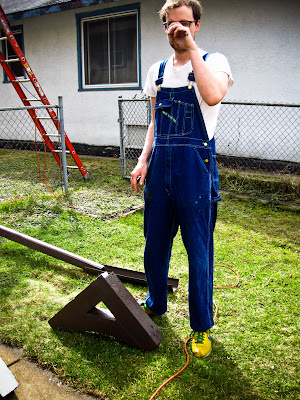 Pops Tuska and I went as far as renting a ladder, filling the rotted wood, painting and getting screws into the decorative knee braces, but once I got up there, I got a major case of vertigo -- and I love heights! We instead checked the gutters and called it a day. Dad had to go home soon anyhow. 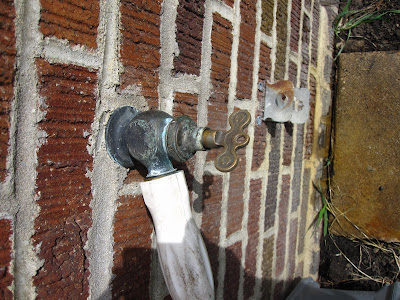 We figured it was safe now to hook up our hose. 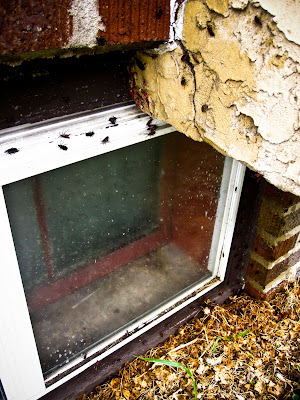 We have a major Box Elder bug problem. For those of you that don't know what they are they look like a cross between a cockroach and a spider at first glance. They don't really do any harm except annoyance (that website above would beg to differ). In the spring and fall when its cold at night and warm during the day they hang out on the south side of buildings and as the day warms up they climb up and into our windows getting into our house.

So, Brooke sprayed the bugs with soapy water. Supposedly that's the best remedy; in fact it did work pretty darn well.

We stopped by Best Buy and got my mom this awesome new TV. Might as well use the employee discount. 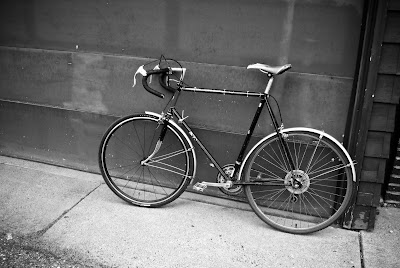 After Scott's dad left we went on a bike ride. Our area of Minneapolis (the Northside) was having a home tour with 25 open houses. We went to check out what gems we could find and compare them to our home. 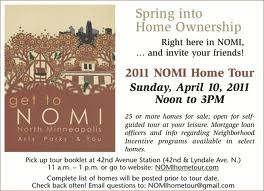 What we found was pretty encouraging. The realtor at the first house, Michael McGee, was a very nice fellow. After I took photos of the place we discussed houses in NoMi and he remembered ours vividly. He tried to get a couple to buy it, but they didn't want to be so close to Broadway and Penn--one reason we bought ours. He especially remembers our garage, everyone does (more on that at a later date).


We went to a couple more houses and finally ended up at a mansion on Oliver and 16th Avenue N. It's simply amazing. The seller's agent Deb Wagner lives in North and sells mostly up here; in fact she represented the sellers of our home. She's a great agent to deal with from either perspective. 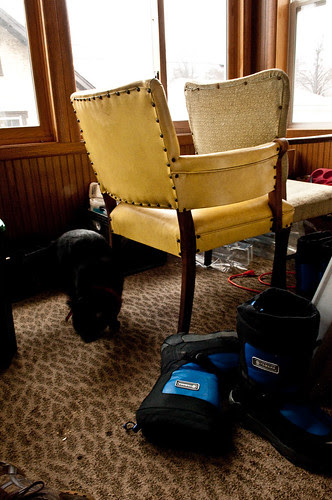 On our way back biking through our alley we found two chairs being thrown out.

I had to convince Brooke that the scuzzier one was worth saving. I won out in the end. 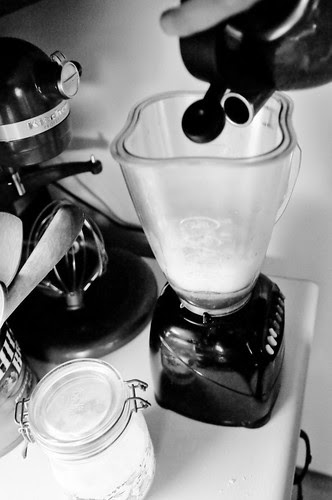 We planned on making dinner for Tyler, Emma and Olive, but our chicken was still frozen. I didn't realize this and had already made coconut milk. Who knew coconut milk was just shredded coconut and hot water? 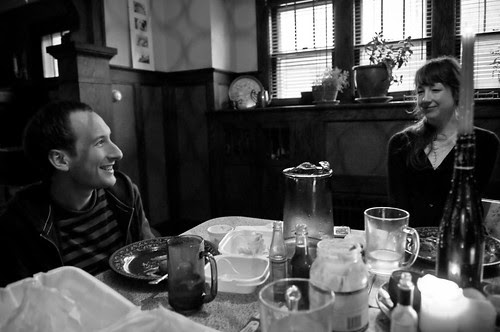 They came over instead for the huge fish house dinner from El-Amin's, one of the many great restaurants in North Minneapolis. 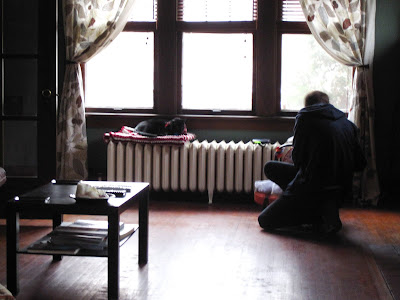 Peanut seemed confused by a baby in the house and seemed more intrigued by Olive's toys than wailing sounds. 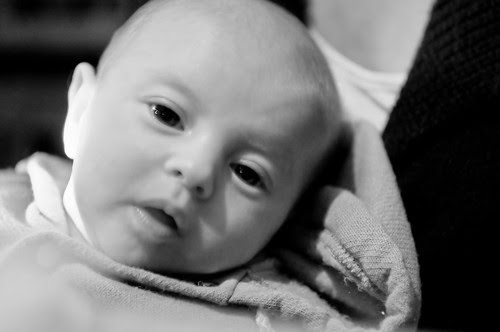 Olive is 7 weeks already. She's almost as old as Minnesota is for Wisconsin Lovers. 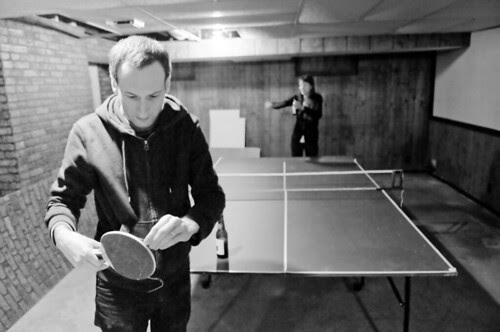 We put our ping pong table to use with a few un-scored games and New Glarus Spotted Cow beers. Our first drink with Emma in a long time. 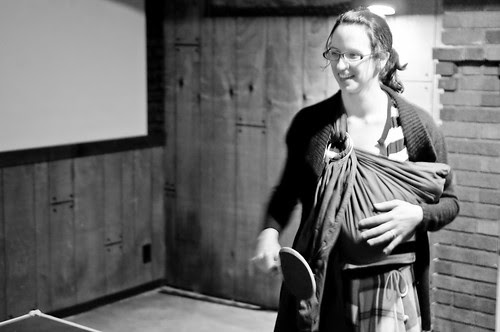