Lambeau for the Very First Time (Thanks Nate) One day in December my buddy Nate called and asked what I was doing the 3rd weekend in January. I wondered aloud, "Yes, why do you ask?" Nate replied, "I got two tickets to the Packers playoff game." I was going to my first Packers game of the season and it played out in our favor!

The stars aligned when the Packers clinched this Divisional Round home game. The only downside was that the forecast was going to be no more than in the low teens. Before heading out I packed all of our body warmers we had on hand. 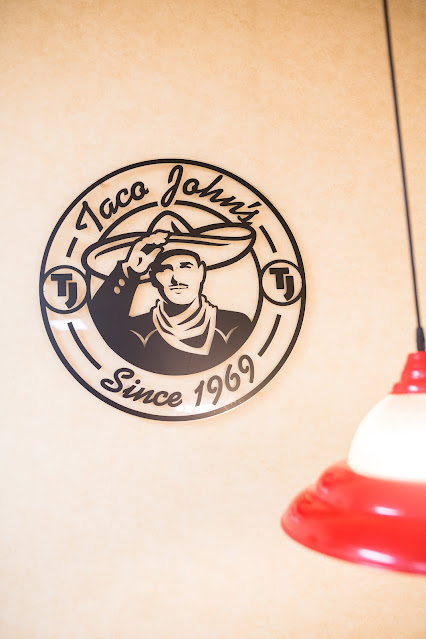 A month and a half later I was on a road trip to Green Bay with Nate: a vegan, football hater. I should explain. He was once Vikings fan, but stopped watching after the CTE revelations. 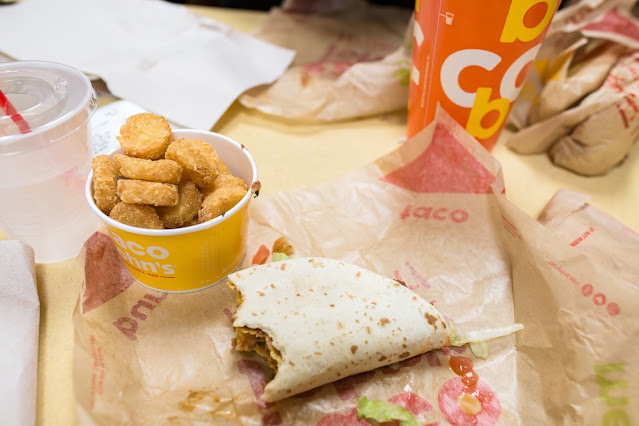 Apparently while supper clubs are not vegan friendly, Taco John's are. 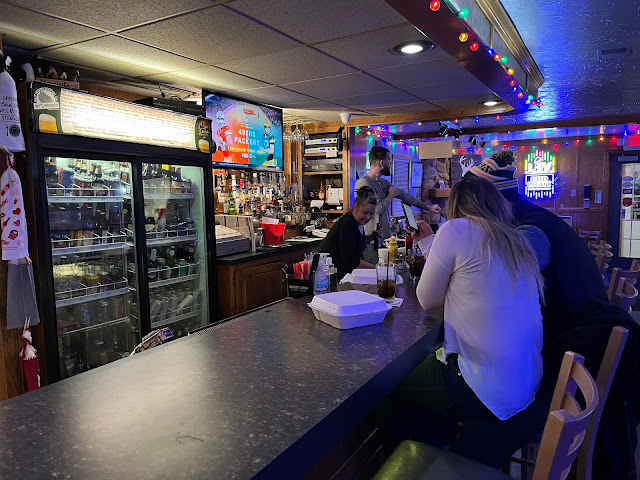 After arriving at our cottage just north of Green Bay on, well, the Bay, we looked for a bar nearby. Nate found Highland Howie's on the edge of Green Bay. This was the perfect Wisconsin bar. 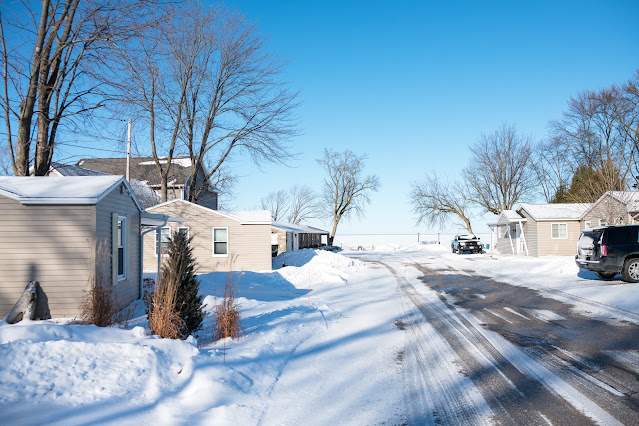 The next day Nate was busy meeting up with his sister and an old friend. It was blustery and 15 degrees outside. I stayed back at the cabin and turned on the TV. 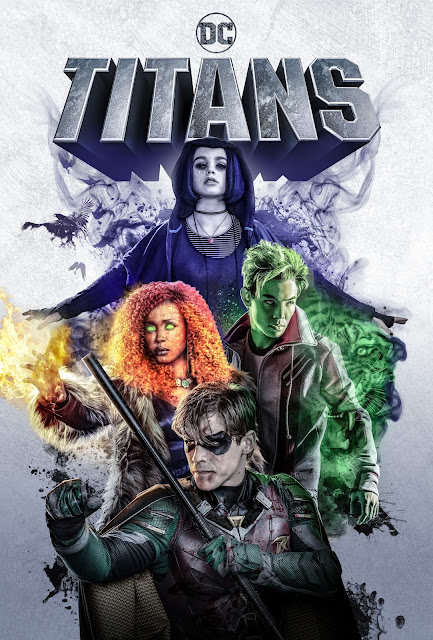 A Titans binge on HBOMax was in store. 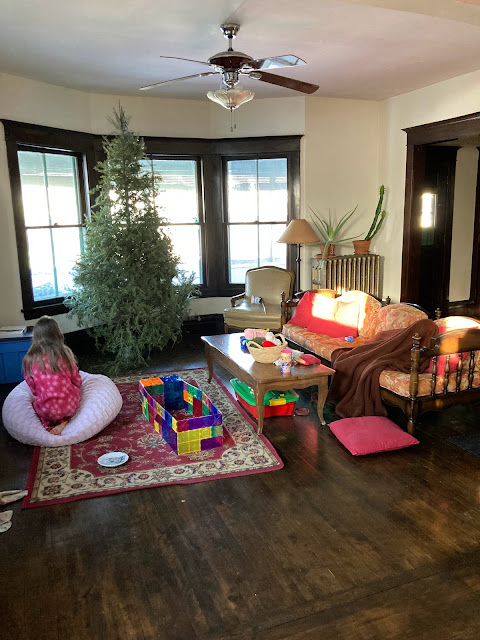 Meanwhile, back at home our Christmas tree was still hanging strong our living room. 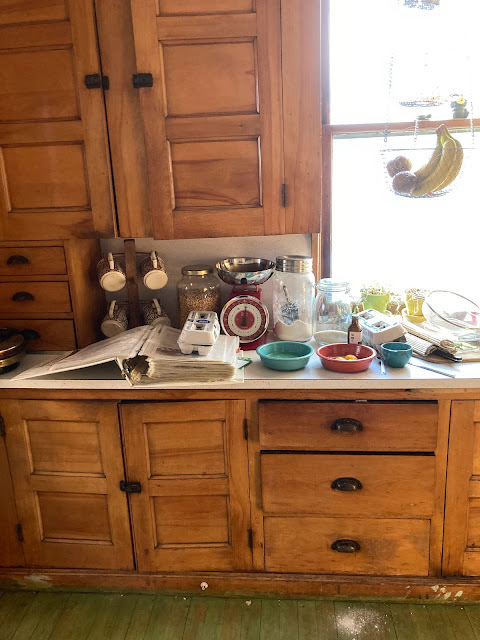 The kids asked for waffles for breakfast. This is normally a Scott thing, but I obliged. 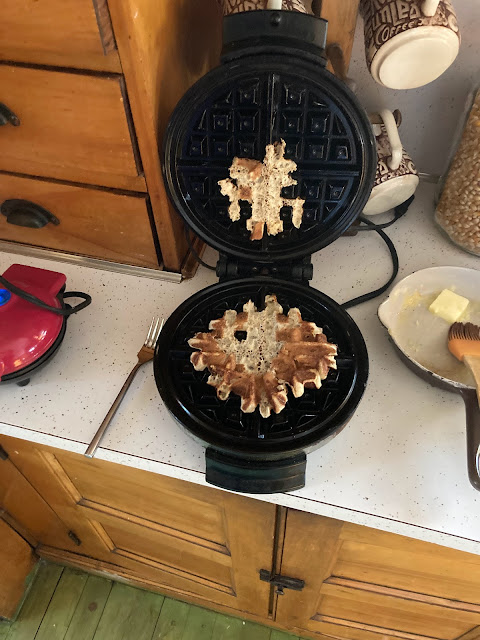 Our waffle iron has been sticking. I gave it a really good deep cleaning, but it still has issues. We watched the movie Encanto last weekend and now Meadow is obsessed and watches it every single day. I love when I catch her smiling while watching. 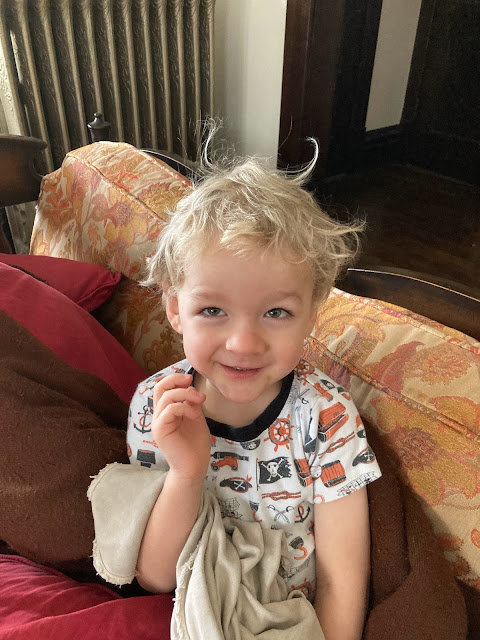 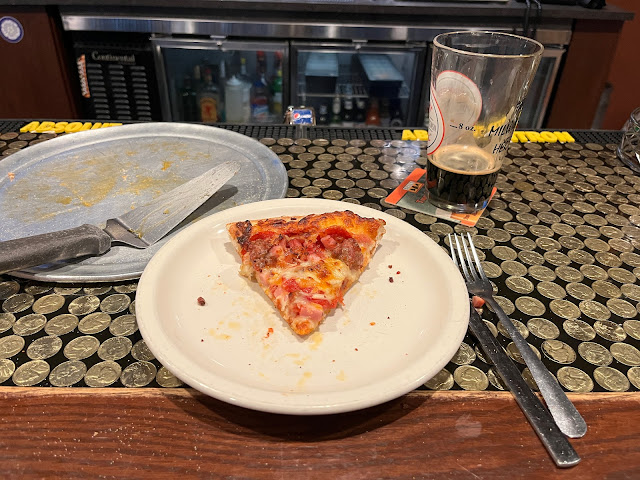 Meanwhile in Green Bay we ended up at Glass Nickel Pizza near downtown Green Bay before the game. 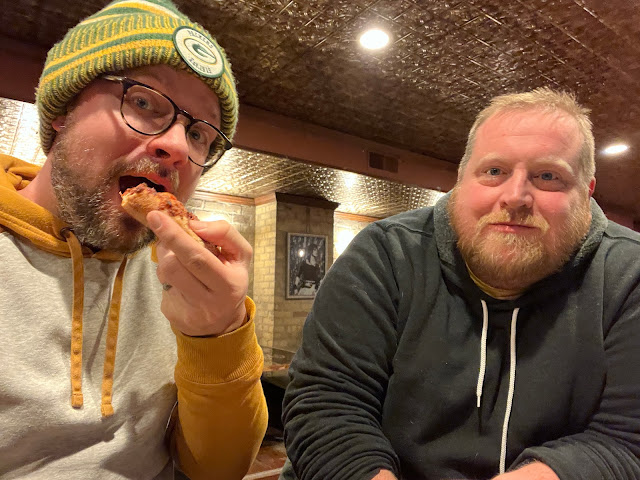 I was ready to see the Packers make it to another NFC Championship game. Nate was not so secretly hoping Rodgers and the Pack would lose. But I couldn't complain, I was going to Lambeau! 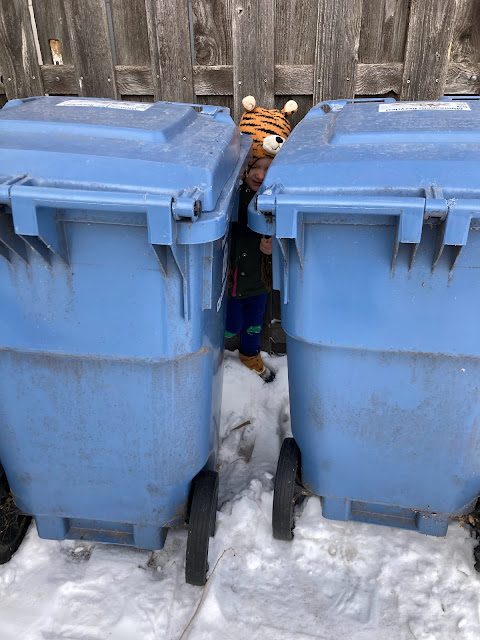 The kids and I walked to the library in the afternoon. 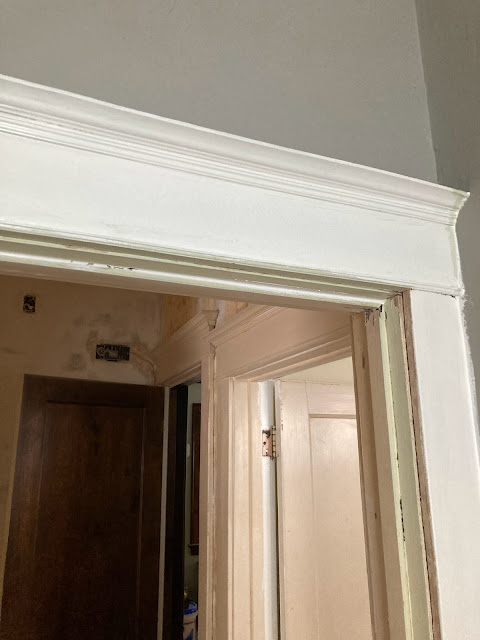 Even with Scott gone, the house project still continue. After caulking the bathroom trim it was time to paint. The trim work in this doorway was a mix of beige, seafoam green and white. 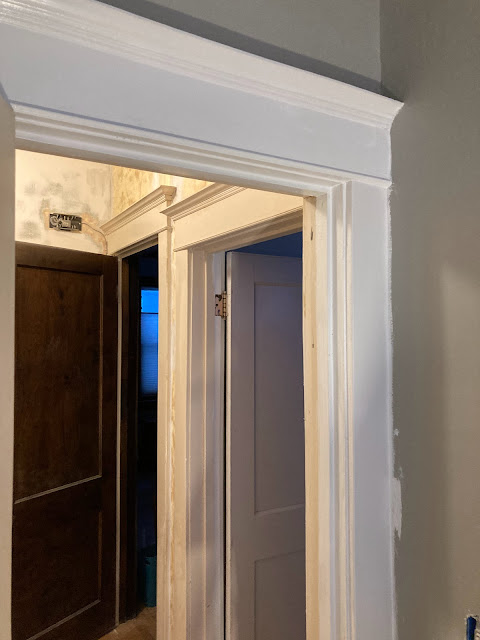 Much better with no gaps and matching color. 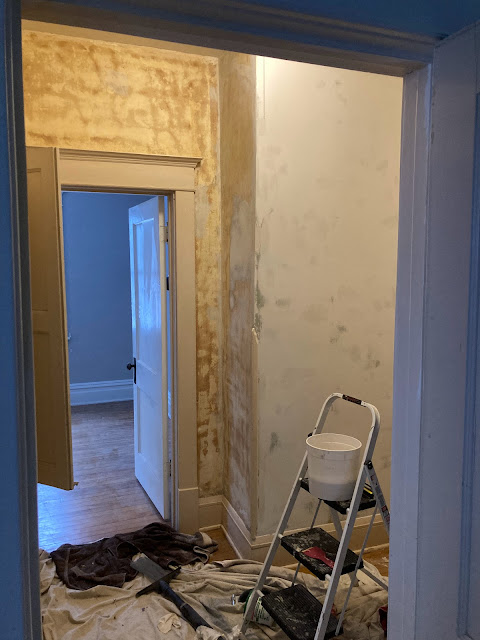 Scott had finished sanding off the wallpaper before he left. Now I was left with cleaning all the dust. 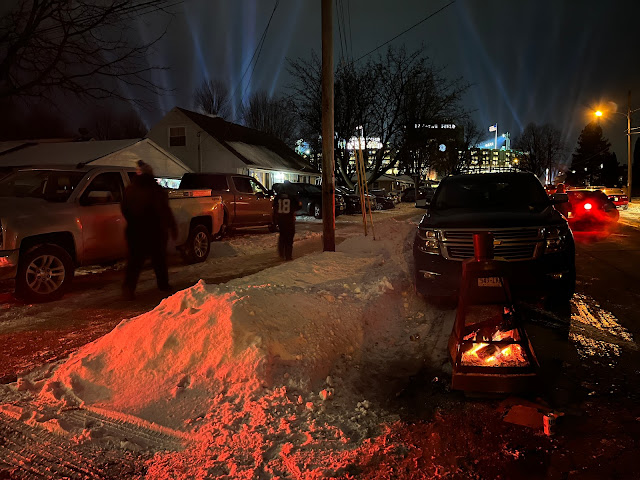 It was game time. The parking situation just a few blocks north of the stadium was easy in and out. 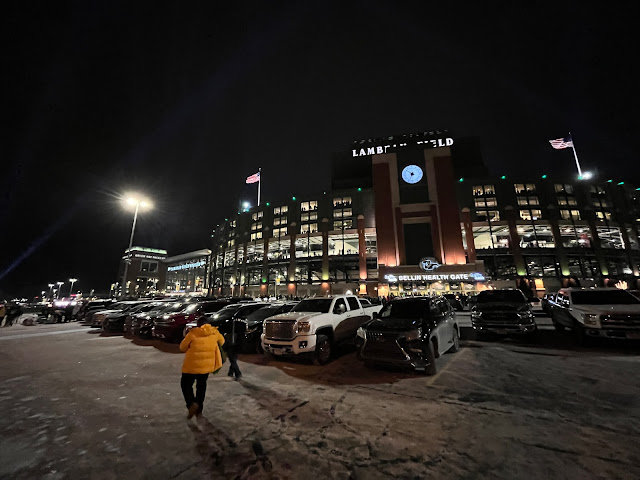 Holy hell, this was really happening. 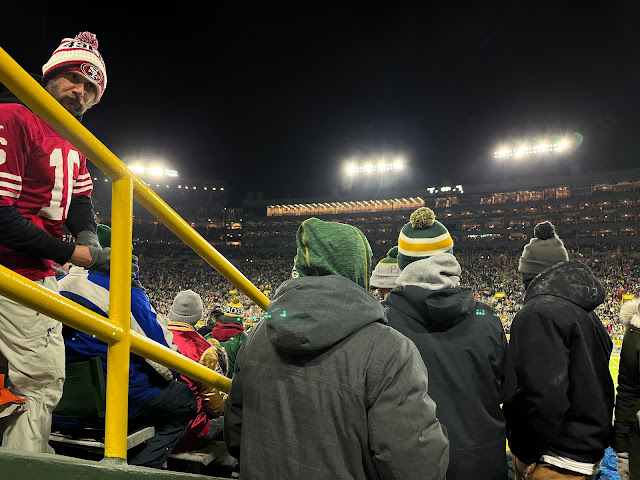 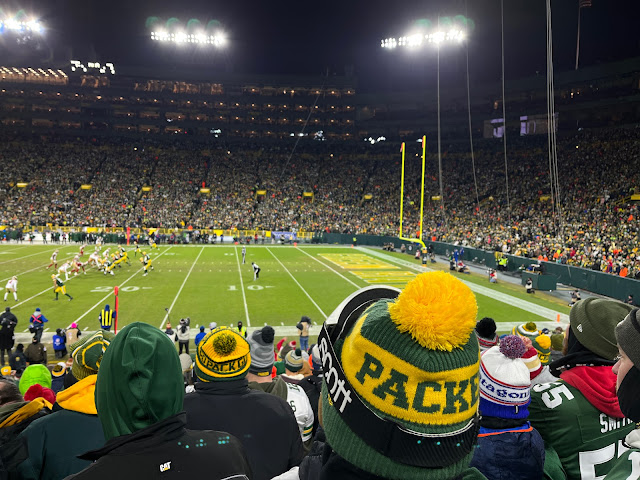 The Packers defense dominated, the offense did nothing much and special teams were...special in a bad way. I felt weird about the game all week and it ended in heartbreak, just as I had assumed. But heck I got to see a Packers game, at Lambeau, in the playoffs! It was an odd weekend, but I'll always remember my first game at Lambeau. Go Pack, go. Thanks, Nate!