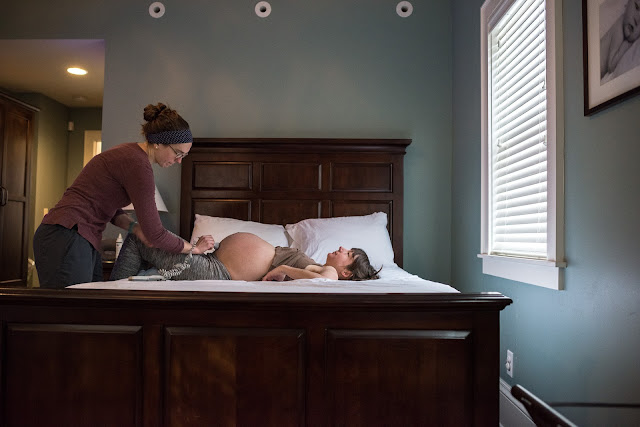 At about 7am I started having contractions. Within a half hour they were only minutes apart, but I could still walk and breath through.

Brooke woke me up way too early and told me the news. I was hoping to sleep in since I'd been out late for that final Hollow Boys show.

With them being close together I called the midwife just in case. She said to call back when I couldn't talk through them. About an hour and half later we were on our way to the birth center.

Brooke spent most of the first few hours in the water-birthing tub. Meadow and I read books and she made fun out of whatever she could find. 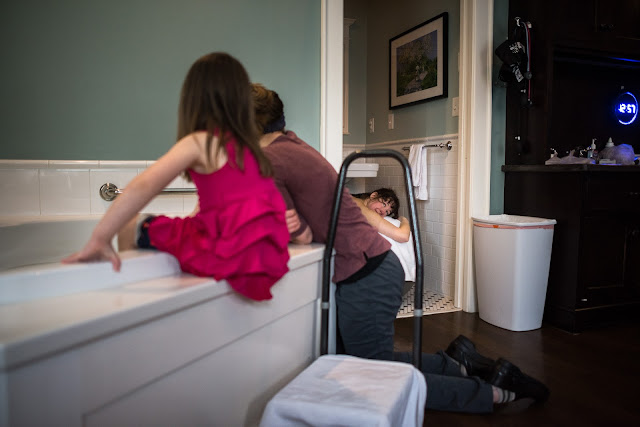 After a couple of hours of intense contractions I was getting tired. We were basically waiting for my water to break to begin pushing.

Meadow eventually decided to dip her toes and then her legs into the bath.

She was along for the whole experience. She kept herself entertained and later told me she didn't like the noises I made. 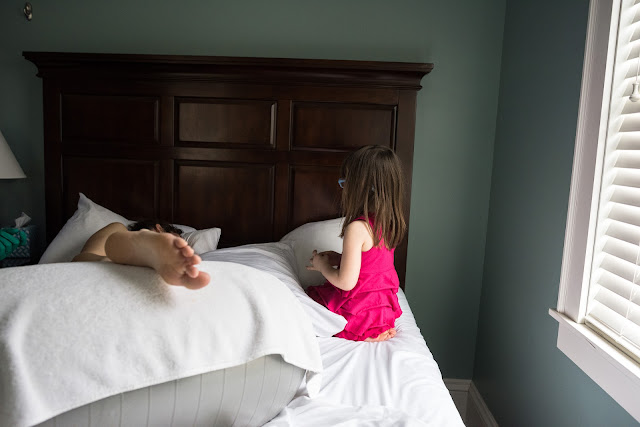 Brooke moved to the bed where her water broke while Meadow and I mostly waited on the comfy couch.  The midwife asked if she wanted to move back to bath, but she wasn't going to move at this point.

My plans of having a water birth fell through again. I was pretty exhausted and could barely move to switch positions. 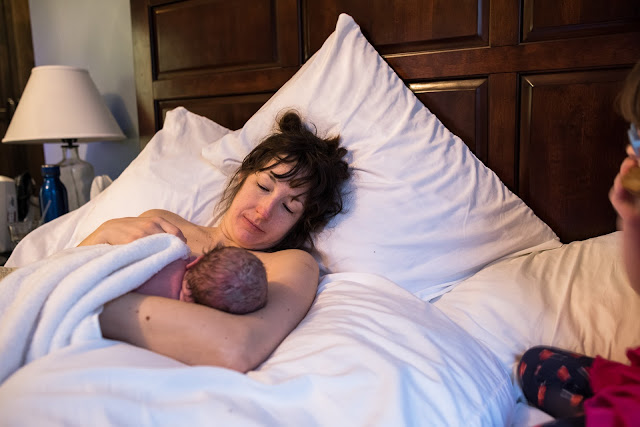 After an hour and 20 minutes of pushing he was born at 3:50pm. 8 pounds 5.5 ounces and 21" long. I thought the second baby was supposed to push out faster. I later learned it was because of him being bigger than Meadow and I guess his shoulders got stuck on the way.

They laid him on my chest and no one was saying if he was a boy or girl. I asked and Scott said it was a boy. This time I was like, a boy? Meadow avoided him for the first hour. I guess she was disappointed in not getting a sister.

I also think she might have been scared by the gooey alien creature that had come out of your womb.

For the next few hours we hung out in the big bed, ate the loaf of bread they baked for us and debated names while messaging our families. 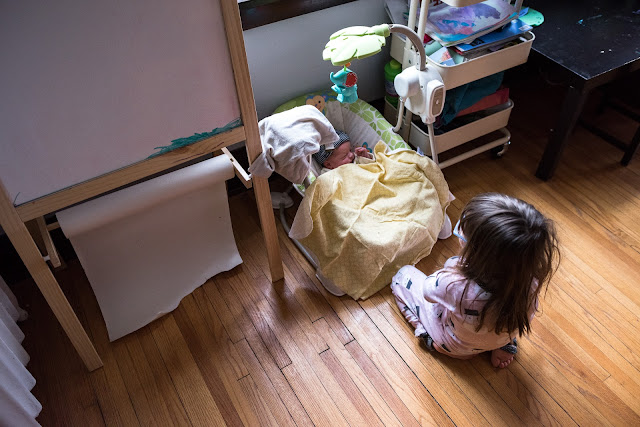 Having a birth at the birth center means they discharge you after 4 hours. I was glad to be home right away. Meadow did end up warming up to the little guy and asks if she can hold him very often. 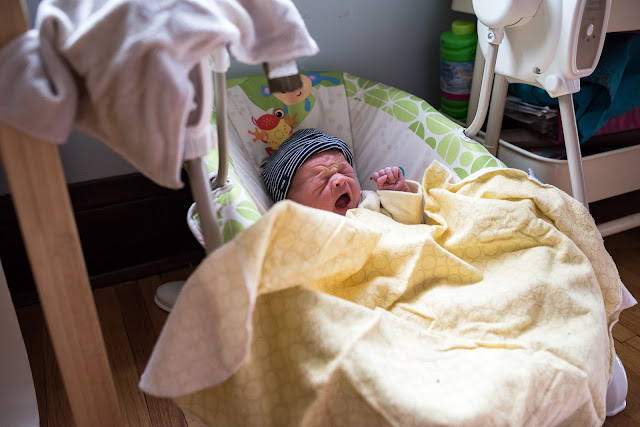 We had three names we were considering for him. Every time we thought we had made a decision we changed our minds again. 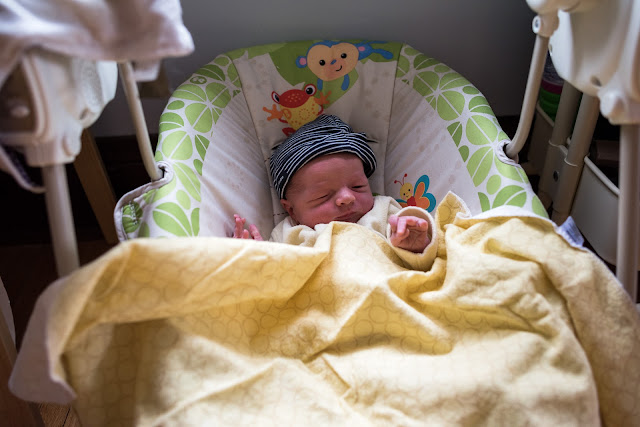 We were leaning toward nature names, but couldn't make our mind up. 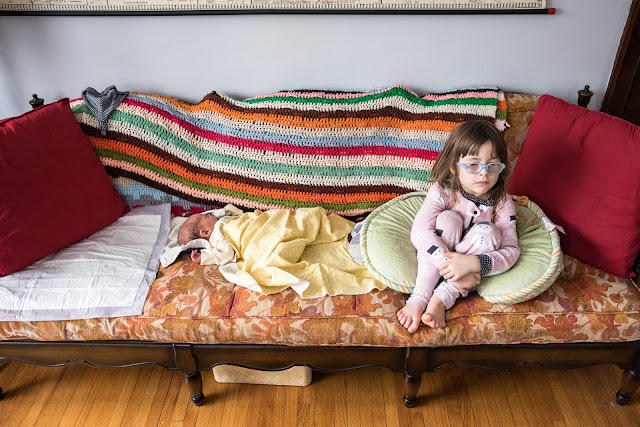 Meadow watched Tangled while the little guy sat next to her for for first few days. 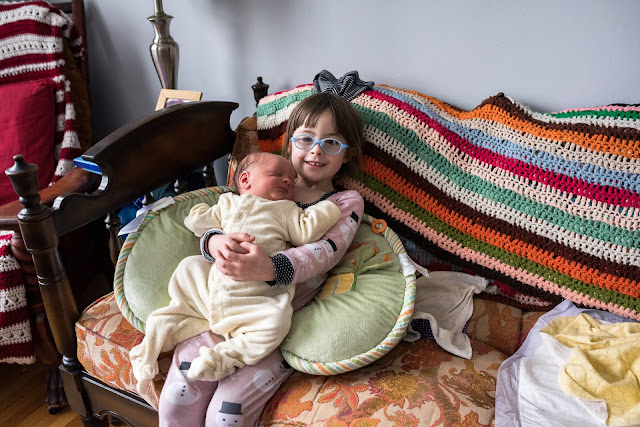 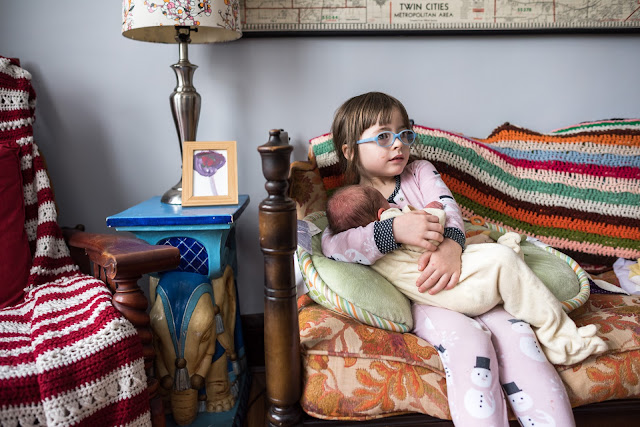 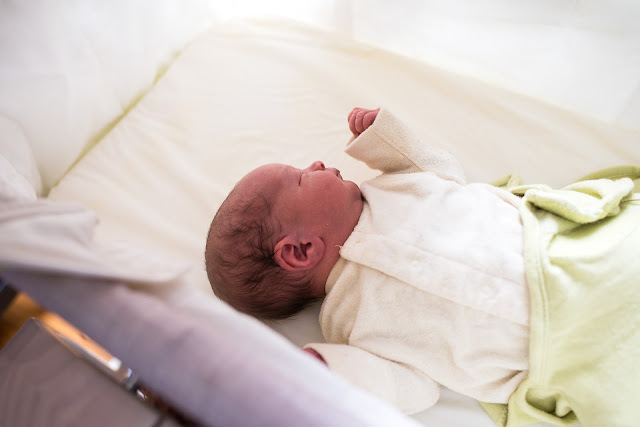 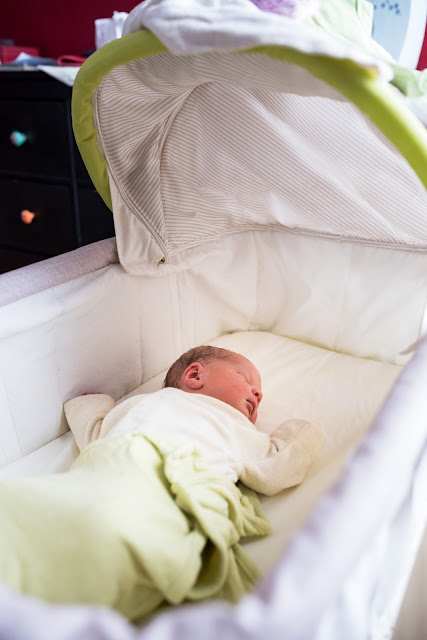 The morning that the in-home nurse came we had decided upon our one non-nature name. We went with Theo (officially Theodore) Jeffrey Tuska.

Although Theodore goes with Theodore Roosevelt who helped create our National Parks and Theodore Wirth who helped establish the park system in Minneapolis. So still kind of nature-y. 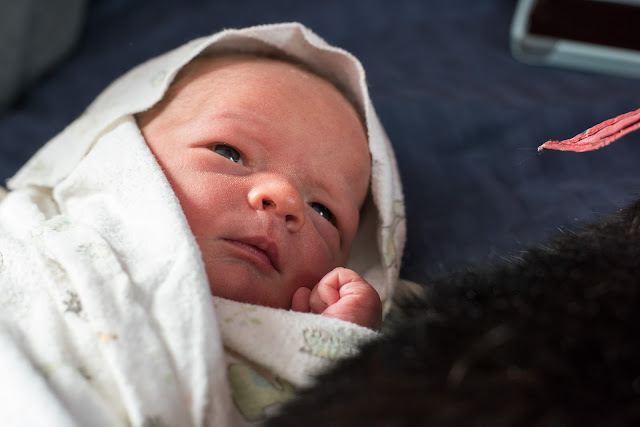 After day 2 an in home nurse came over to check on Theo. It was during her visit that she noticed some yellow color to his skin. She was going to do a blood draw to check his bilirubin levels (aka what causes jaundice), but he wasn't bleeding enough to get enough of a sample. We were sent to a pediatrician clinic where they did a test. He was elevated, but not a concern. 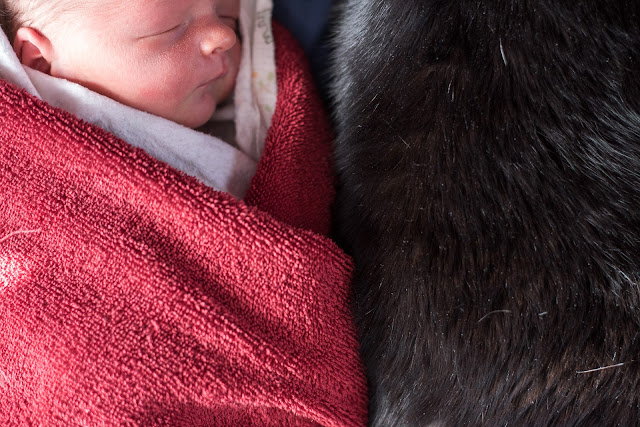 The next day on Wednesday at his first dr appointment his doctor had us go to St John's Hospital for a blood draw. It was there that we found his levels had gone up and we were told he had to stay for the night.

We were not anticipating having to stay in the hospital, but we just wanted Theo to be healthy. If the jaundice gets too built up it can cause brain damage in babies.

I had jaundice as a newborn and Meadow had some lower levels as well. I guess I'm not surprised. 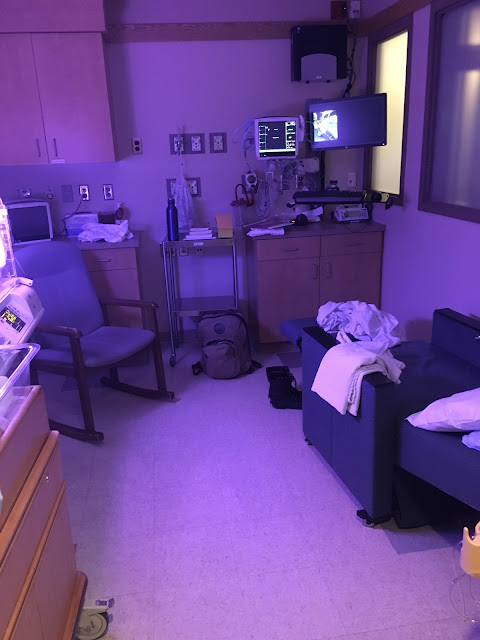 The first night Meadow and Scott got to stay with me in one of the maternity rooms. The room was needed so they were sent home in the morning. Kids aren't allowed in the NICU. Luckily Theo had his own little room in the unit so I could stay with him. Being around all the machines and lights and babies crying wasn't exactly relaxing. And since we didn't know we were coming I didn't bring anything with to do. 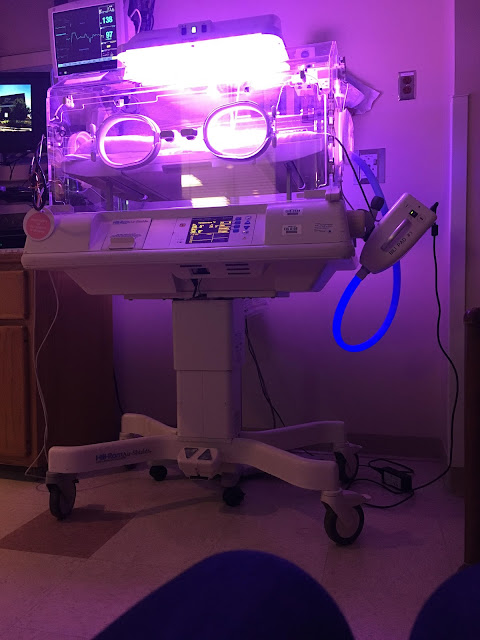 He was given the phototherapy treatment and only came out for diaper changes and feedings. 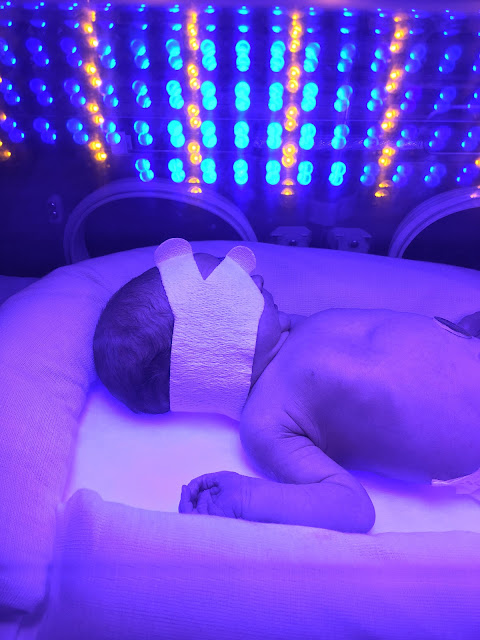 It didn't look relaxing, but we got off pretty easy considering all that could happen at birth.

I felt so bad for the other parents with babies in the NICU who had to go home every night without their baby. I at least got to hold him every 2 hours. 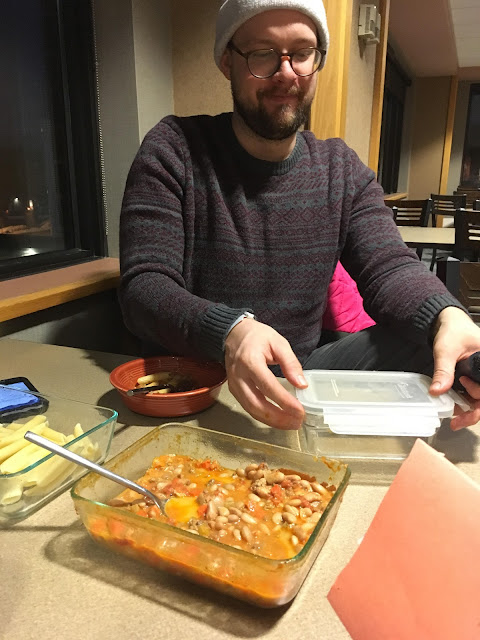 On the second evening Scott and Meadow returned to bring me dinner.

I basically went home for a few hours to eat lunch and make a feast for Brookie. I returned with beans bolgnese and pasta. 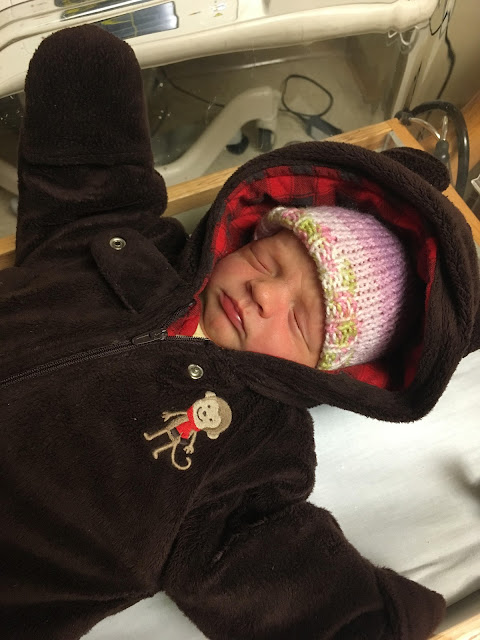 By the next morning his levels had dropped enough that we could go back home.

Meadow and I came over to pick up the little guy and mama. 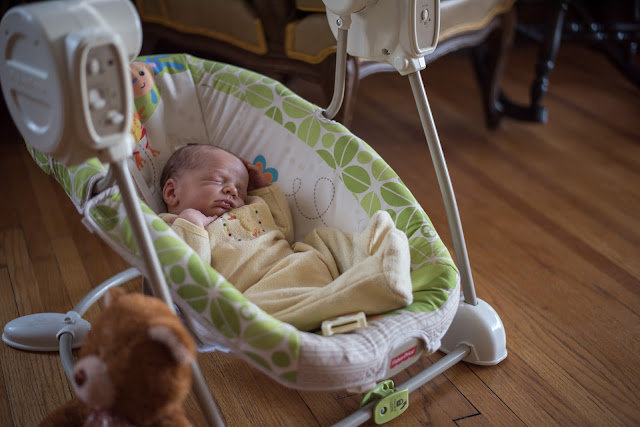 He was still super sleepy that first day back, but over the next few days the little guy got a little more energy. Brooke's coworkers even sent a little teddy bear for Teddy. 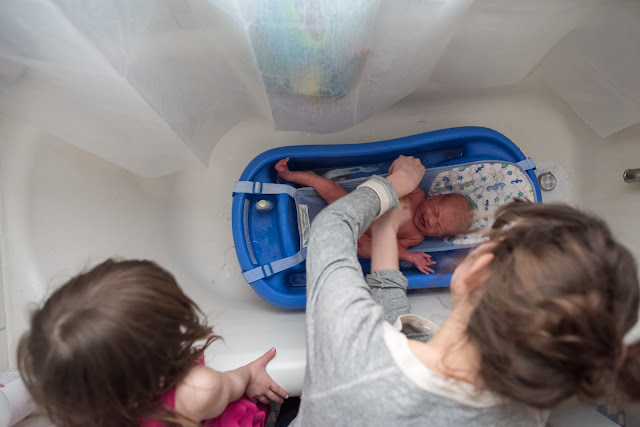 I was finally able to give him his first bath. He was not a fan.

We love you little Theo.