After talking about it for forever, we planned a camping trip with Cayla and Amanda. I have also been wanting to do a backpacking site with Meadow for a long time too. Luckily these two were up for the adventure.

When I checked in the ranger warned that due to the flooding the bugs were extremely bad right now. I figured, but had no idea how bad. Our hippie bug spray was doing nothing. Even with Cayla's "real" bug spray we were still getting attacked.

While attempting the hike in we ran into a mini lake along the trail. We said "Hell no," to that and decided it was time for plan b.

The ranger did mention that since we had a little one, if we wanted we could take a shortcut route near the edge of the park. Not quite the trek I had hoped for, but it still counts for Meadow's first time.

Sadly on our attempt hike I lost Meadow's wooden camera.

Despite the bugs we had a nice site.

Brooke and Amanda had the right idea as soon as the tents were up.

I used the setting up our beds as an excuse.

We were actually on a hill.

More of a tiny bluff. I guess, that's a hill. 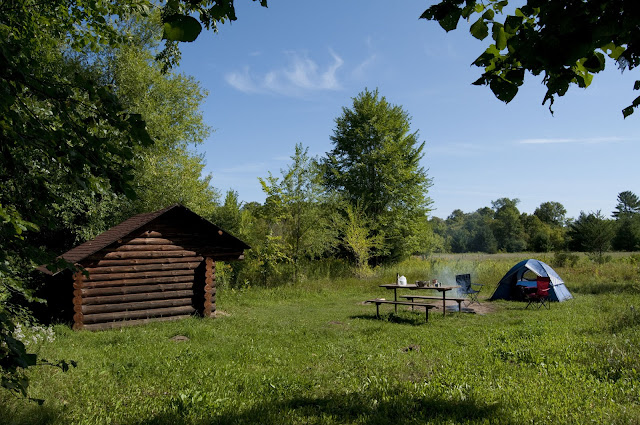 Going back a few years ago, this park was the first park Scott and I did a backpacking site. It only happened because the campground was full and backpack sites were available. We were like, yea sure how far can it be? We were also very inexperienced campers.

On that first adventure we had a duffle bag, camp chairs, firewood...

...an air mattress, campfire popcorn maker, our tent and sleeping bags. We had no backpacks then, just a duffle bag.

It was an education in what not to do when backpacking. We're backpacking minimialits these days.

We made it about halfway before we ditched some of our stuff and made it to camp. It was getting dark and we had to get the rest of our stuff. We ran all the way back which was way farther than we thought. I hope nobody saw us, we must have looked like quite the site.

But hey, we'd never had started backpacking and so many other outdoor adventures without the first experience. And it was a beautiful place to camp with the love of your life.

Cayla cooked dinner for us using both of our camp stoves. We also enjoyed the Moscow Mules that the Baumanns brought.

I had contemplated doing one of the free canoe sites on the St Croix, but with the flooding I didn't know how crazy the rapids would be.

Amanda and Meadow always have the best time. She's so good with kids.

We ate a yummy veggie skillet from their garden.

Even though it wasn't cool we all put on long layers to keep away the skeeters.

By now the I think we were all getting used to the ravenous mosquitos.

Perhaps Cayla's fire had cleared them all out.

Or not. Meadow and Amanda enjoyed the tent while we discussed the election and other random things with Cayla.

But first we had to hang up our food. The ranger also warned that there had been extra bear sightings this summer.

Our tiny tent was the same size as Cayla and Amanda's vestibule.

We used our tiny tent again. Meadow loves it, since it's tiny, like her. I think we'll just go back to the Slumberjack next camp trip even if we hike in.

I don't mind the tiny tent.

Hey, the Baumann's also have a tiny percolator.

For some reason Meadow didn't want to eat. Amanda got her to take a few nibbles.

Not sure why, she loves breakfast!

We would have stayed longer, but the bugs kind of ruined the fun.

We were all ready to find somewhere to swim. Someplace without thousands of skeeters.

Of course on the way back Amanda suggested we go thrifting.

We'd planned on going swimming at Webber Natual Pool with them, but Cayla was feeling under the weather. We figured we should go swimming anyways since we were already there.

Last time we were here Meadow went right in, this time she stuck to the shore.

We couldn't leave until  Meadow tried the zipline.

Sure, Meadow you can get a few minutes of playground time in.

This kid would live at playgrounds if you let her.