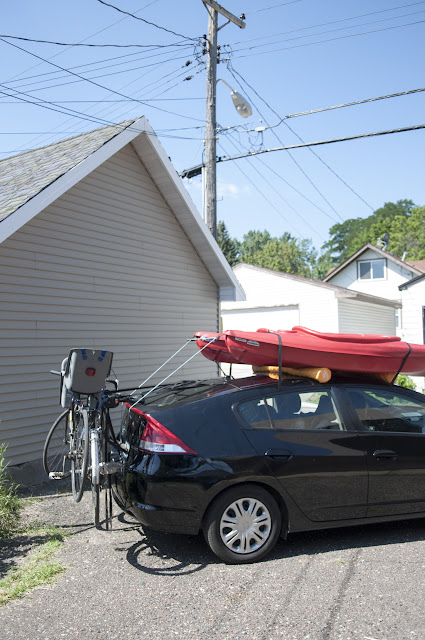 This seems to be the summer of camping. 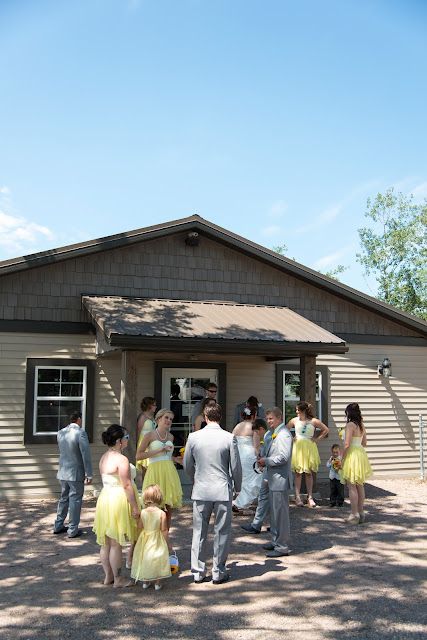 I had a wedding outside of St. Cloud that I signed onto at the last second. Might as well turn it into a camping trip afterward. 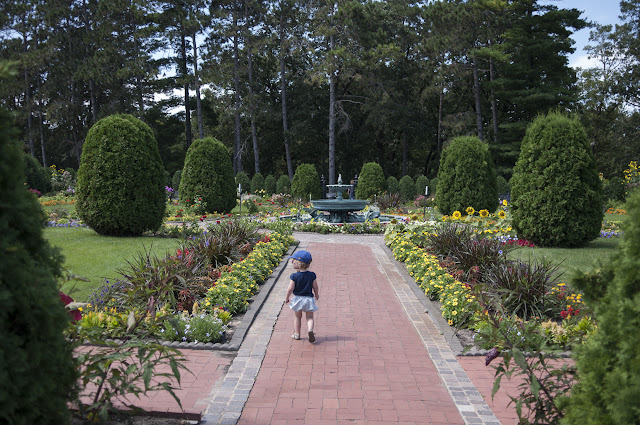 Meanwhile Meadow and I hung out in St. Cloud. We went to the Munsinger Gardens first. This area of the city lies near the Mississippi and was once an old saw mill.

She hasn't figured out colors yet.

Then we went down the street to eat lunch and play at a playground. Riverside Park is right next to the gardens and it had a splash pad too. Meadow prefers the playground.

I needed to get more wipes for Meadow. She fell asleep on the 5 minute drive over to Target.

I read my book and let her nap for a little while.

This time we went to Millstream Park in nearby St. Joseph, Minnesota. We weren't sure what to expect so we brought the kayaks and the bikes.

This was the closest free campsite to where Scott shot the wedding. It was just off the Lake Wobegon Trail so we decided to stay.

The website said the campground had canoeing, swimming and hiking. There wasn't any of that here.

We could've swam in the stream I guess.

It wasn't much more than a typical big rural park. 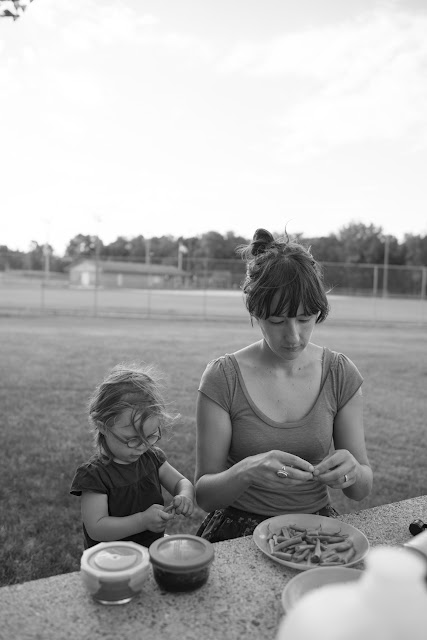 I told Scott I didn't want ramen or canned soups again. Kind of funny how we cook homemade at home and not camping. Why wouldn't we when we camp?

I made a pasta dish with boiled potatoes and green beans with olive oil of course.

I guess it turned out alright.

Our shadows were getting super long. It must be time to go on an adventure.

We thought we would try out the bike trail and head to town.

This turned out to be a little offshoot of the main trail that took you to town.

We spotted this cute cafe on the way into town. It was closed so we looked up the next closest ice cream shop.

It turned out that there was an ice cream place just across the road that was hidden from the highway. Cone Castle not only has ice cream cones, but all other kinds of food in cones including pizza. Weird.

I ordered a small cone for Meadow and it ended up being giant! I guess we could have shared one.

We had to get back before the sun went down.

It's been a nice change of scenery traveling through prairie country instead of forests. 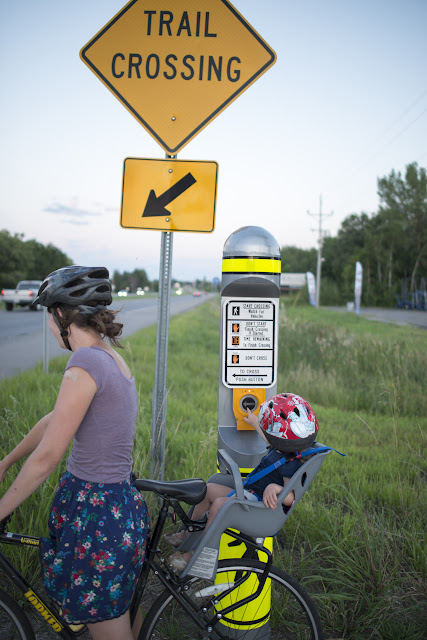 For the campsites being so close together it was pretty quiet. Except last night when our neighbor had a visitor that decided to talk loudly about his life story being recently released from jail and how he hates his wife.

That wasn't creepy at all...

We later found out it was the guy on the other end of the campground who was there with his wife and three kids. 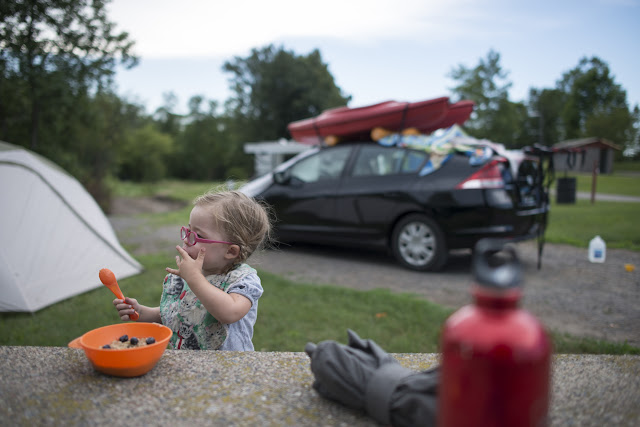 As you can see above another severe storm was coming for us. It's the summer of thunderstorms.

We covered up the car as much as possible so we didn't get any hail damage.

After only two minutes of sprinkles the sky cleared up. I was hoping to take a nap. 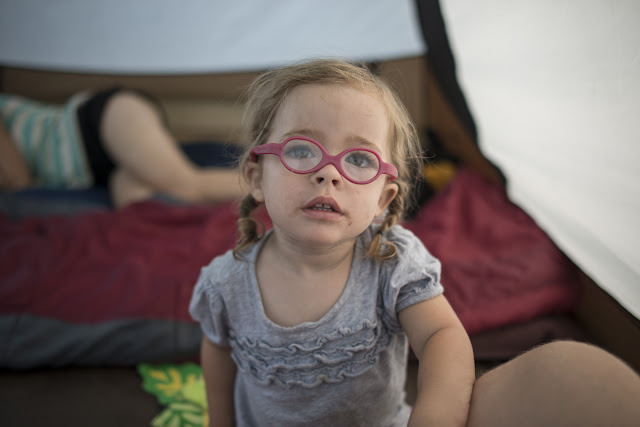 Meadow was ready to get back on the Lake Wobegon Trail.

Our neighbor was up all night building his structure to block the storm. Too bad he didn't need it.

The guy was sleeping in a screen tent. It looked like he was living here. Can't blame him since it's a pay what you can campsite. 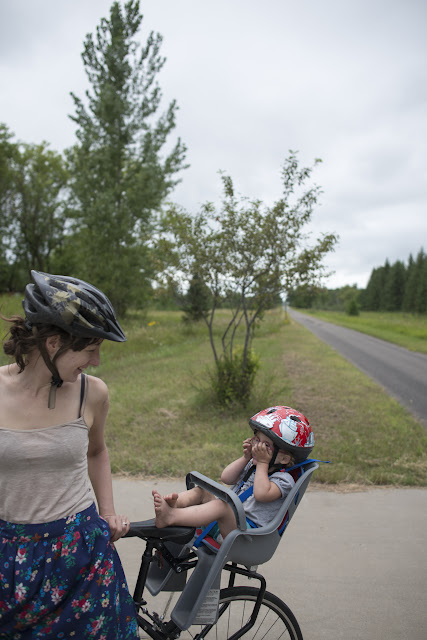 Onto the Lake Wobegon trail we went.

We got to Avon and this crazy look out tower caught our eyes. You couldn't really see anything special from the lookout.

We picked up a book for Meadow at the little free library. We told her once she dropped it she was done. She ended up hanging on to it for a few miles.

We were hoping that we'd come across a county fair. As a matter of luck, the Church of Seven Dolors was throwing a church festival just as we approached tiny Albany, Minnesota.

It was almost like an oasis. Beer, burgers and a playground for Meadow.

I can't believe we didn't get any pie.

There's no other way to drink a Budweiser.

Then we ate the peanut butter and jelly sandwiches we had packed.

I always think it's funny that Catholic Events involve beer and gambling.

I think it's funny that protestants don't know how to have a good time. 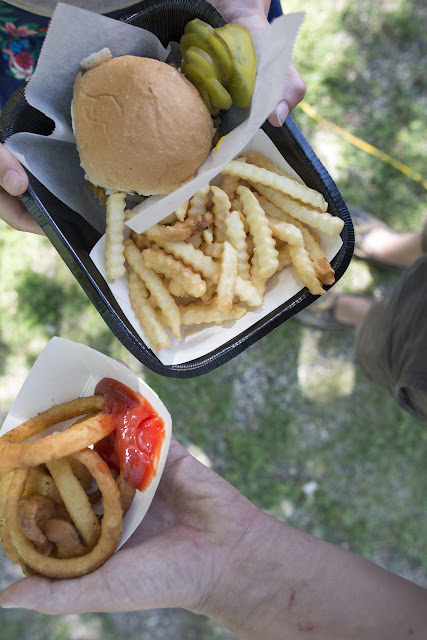 We were still hungry so we all shared some onion rings, fries and a burger.

Meadow had been waiting patiently for the other kids to be done with the log roller. She thought it was the coolest thing.

We should've joined in the on a game of bingo.

On the way back we walked down Albany's main street. One side of  the street was classic storefronts. It looks like the other side used to have a depot and rail tracks. 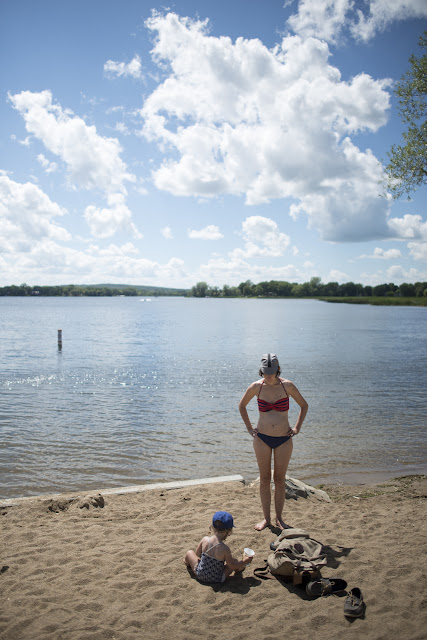 We had passed a beach in Avon on our way. We decided to stop on our way back. 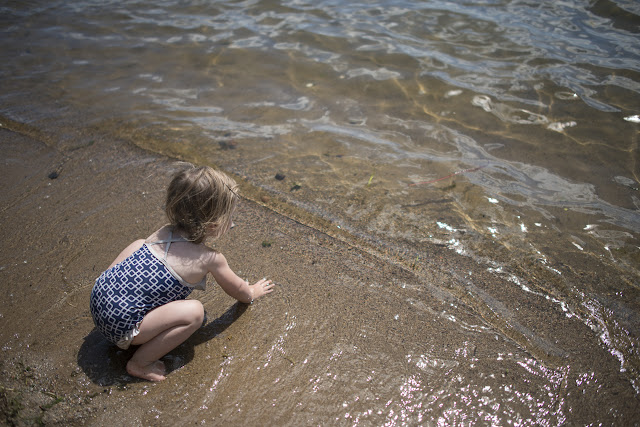 Meadow stayed as close to shore as possible.

Once in awhile we would throw her toys in the water and make her get them. I know we are great parents. 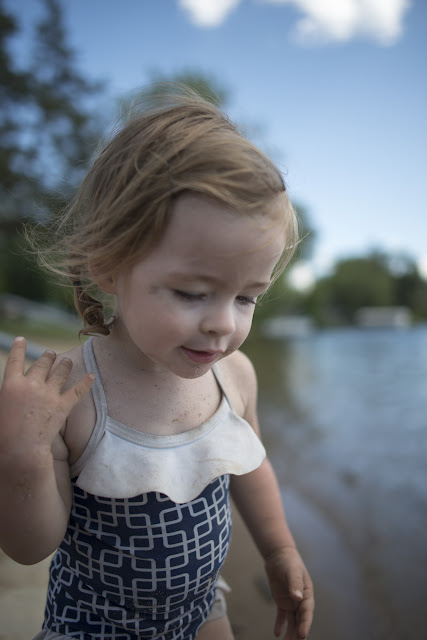 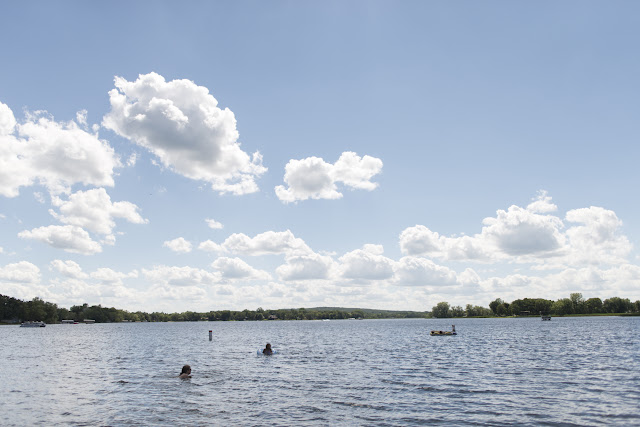 It's always nice to swim in clear lakes once in awhile.

So clear that you could see the fish nipping at our toes.

Meadow feels right at home on the sandy beach.

She found on older kid to play with and got full of sand.

I had to force Meadow into the water to get all the sand washed off of her. She wasn't too happy about that.

On the ride back Meadow thought it would be fun to stick her leg under my shirt.

Back on the trail to St. Joseph we went.

I was ready for a nap when we got back. Our campsite has no shade so the tent was hot in the sun.

We were out of fuel for the camp stove. The closest sporting goods store was a Scheel's in the suburbs of St. Cloud. Meadow and Brooke wanted to pick up a few other things.

While Scott made dinner I remembered that I had brought Meadow's little truck along. I gave it to her to play with thinking it would last 30 seconds.

Instead she was driving it all over and making vroom noises. This is the first time I've seen her do that with a vehicle. She seems to always enjoy playing with cars.

I later caught her driving her truck on our car. There must have been a rock stuck in one of the wheels because now there's a long scratch mark along one side.

Meanwhile I slaved over dinner.

We didn't have a lid to cook the quinoa. I used the skillet as a lid and to keep the veggies warm.

Basically the same ingredients as yesterday, but with paprika and onions. It was pan fried instead of boiled and then mixed with the quinoa.

We decided to go for a walk after dinner.

We went along the creek through the disc golf tees. We found a rope swing that went into the creek. I wish we had found that earlier.

Meadow woke up in the middle of the night crying and saying no. For a half hour she cried and we did everything we could to get her to stop. She has slept fine on all our other camping trips.

Of course she would cry when we have close neighbors. We finally realized she had leaked in her diaper. Once we changed her she was perfectly fine. I wish she would just tell us what's wrong.

In the morning she was a helpful little bug.

Meadow wanted more oatmeal after she was done. I was happy to share.

Since we dragged the kayaks all the way here we figured we would take them out today. 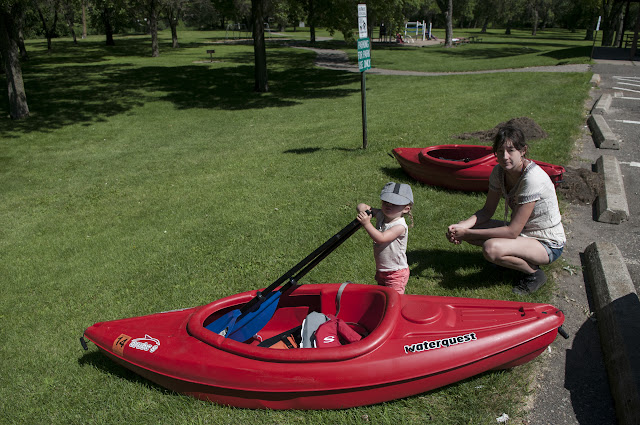 I found a launch site in St. Cloud and we took off.

This river didn't seem as rapidy as the St Croix. I figured we could just paddle upstream then float back down. Two minutes in we hit some current that was strong enough to keep us from going anywhere.

So much for that.

After coming up with multiple failed plans on how to make this work we gave up and decided to go home.

More like Brooke turned down every alternative I proposed. What do you do to get back to your car after kayaking?

As a consolation prize we happened upon dollar ice cream cones at Culver's. This made up for the failed kayak adventure.