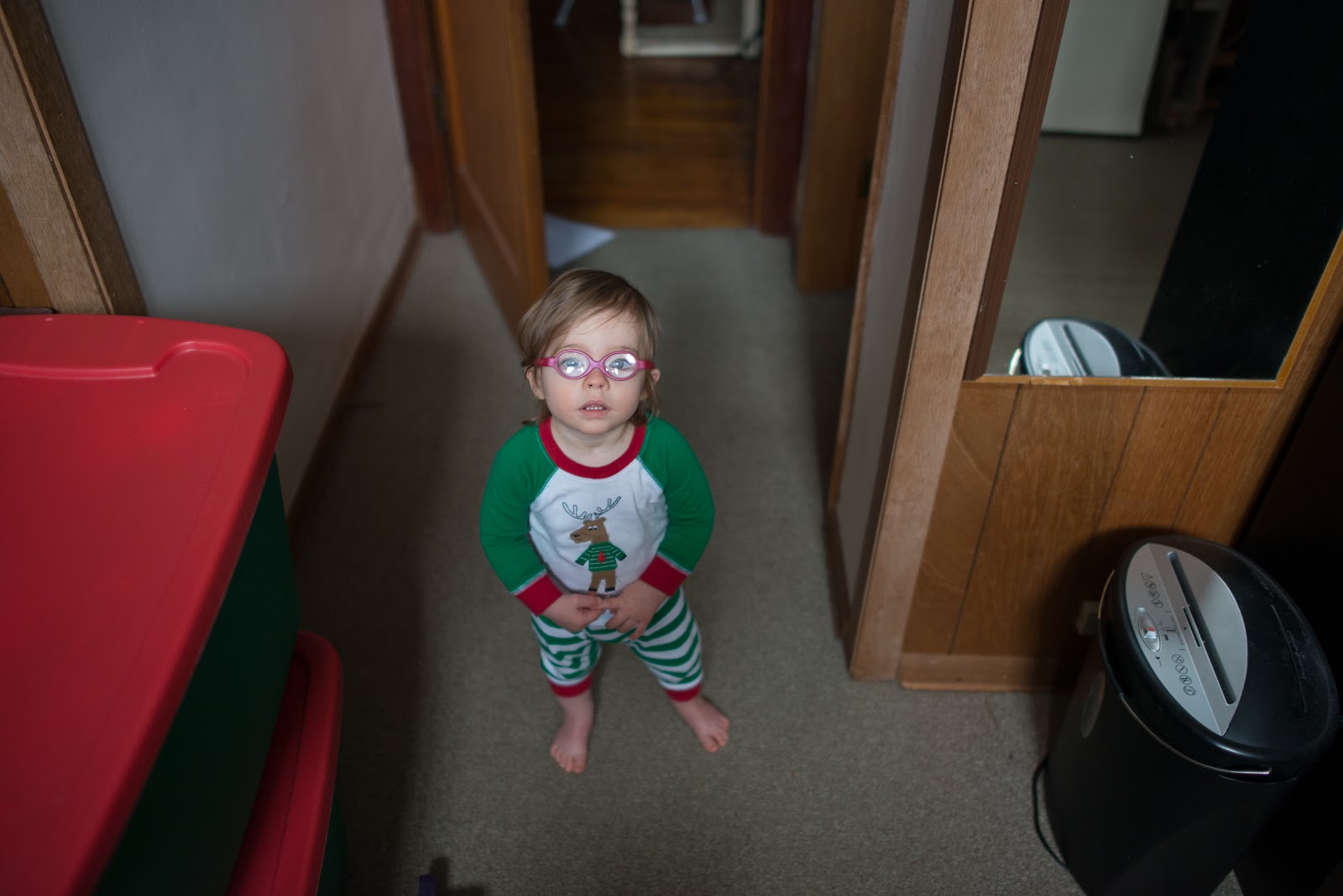 On the days when I have to work Meadow sleeps in late.  On my days off she gets up early. I told Scott the night before that if she woke up before nine he had to get up with her so I could sleep in.

I made good on my promise or at least I thought I did. 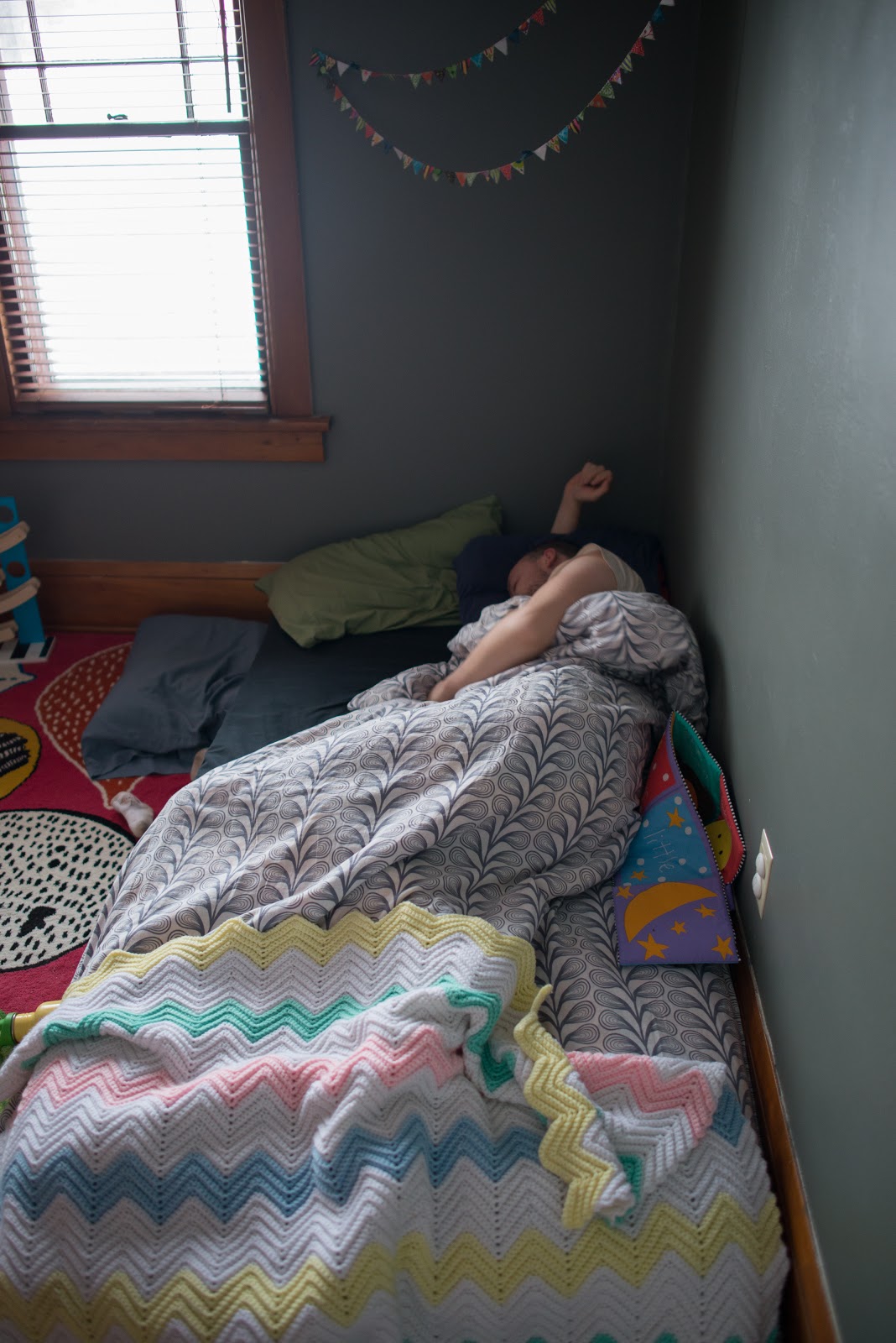 Getting up with Meadow for Scott meant trying to get her back to sleep. It didn't work because I could hear her talking and didn't get to sleep in at all.

Umm...no. I simply changed her diaper and let her play in her room because someone else had an extravagant breakfast planned. I didn't want to tease Meadow by going downstairs. 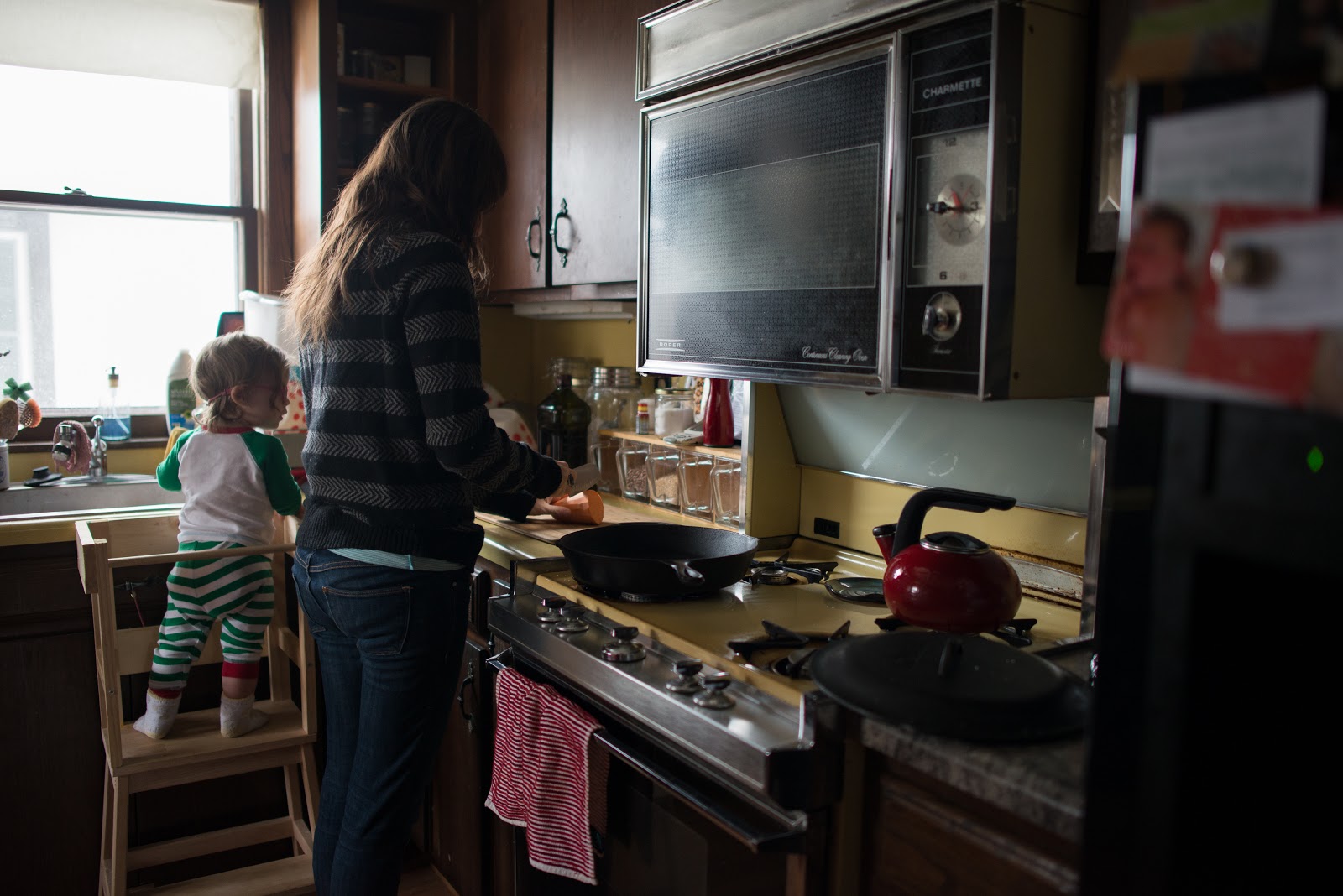 Since I had been awake Meadow and I got to work on breakfast. 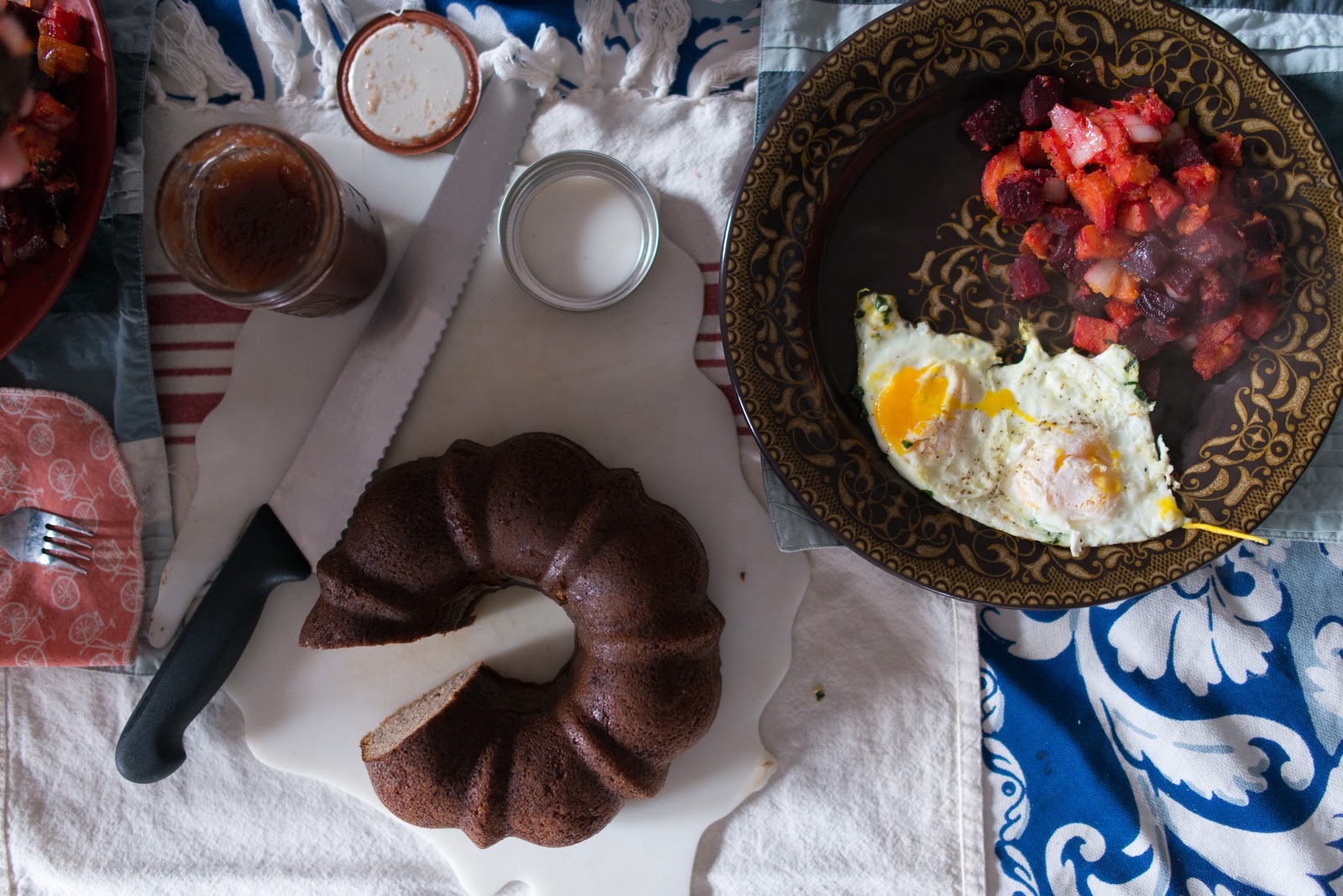 The night before I made almond flour banana bread. I'm finding lots of uses lately for my Bundt pans. I also made sweet potato and beet hash. Not as good as Duluth Grill's, I need to get their cookbook.

The eggs were perfect and the hash was tasty enough. The banana bread did not taste like bananas. Crazy hippy recipes. 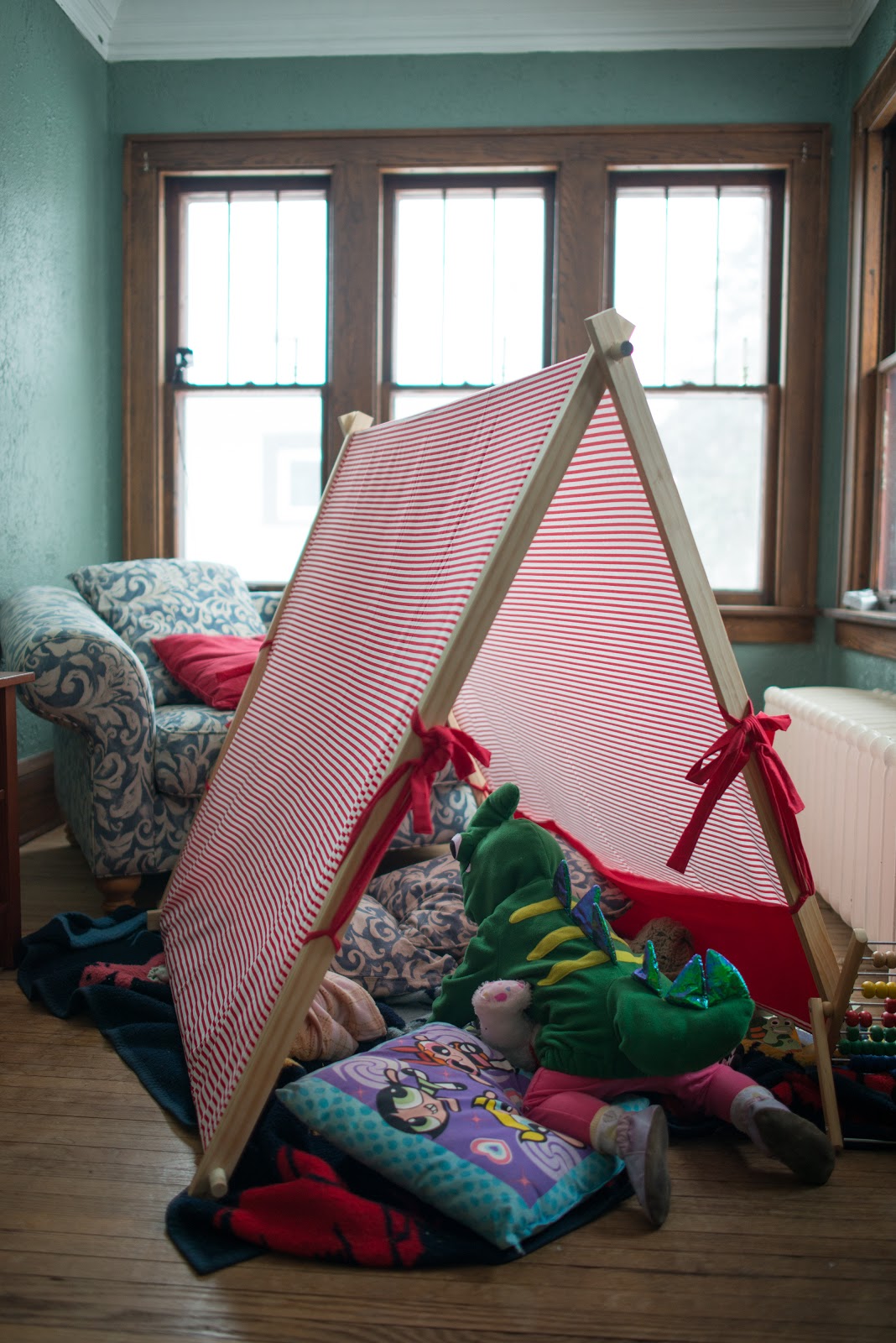 We set up Meadow's tent in the front sun room area until we put away the Christmas trees. Sometimes after dinner we all lay together in it reading books. Also note Meadow wanted to wear her costume today. 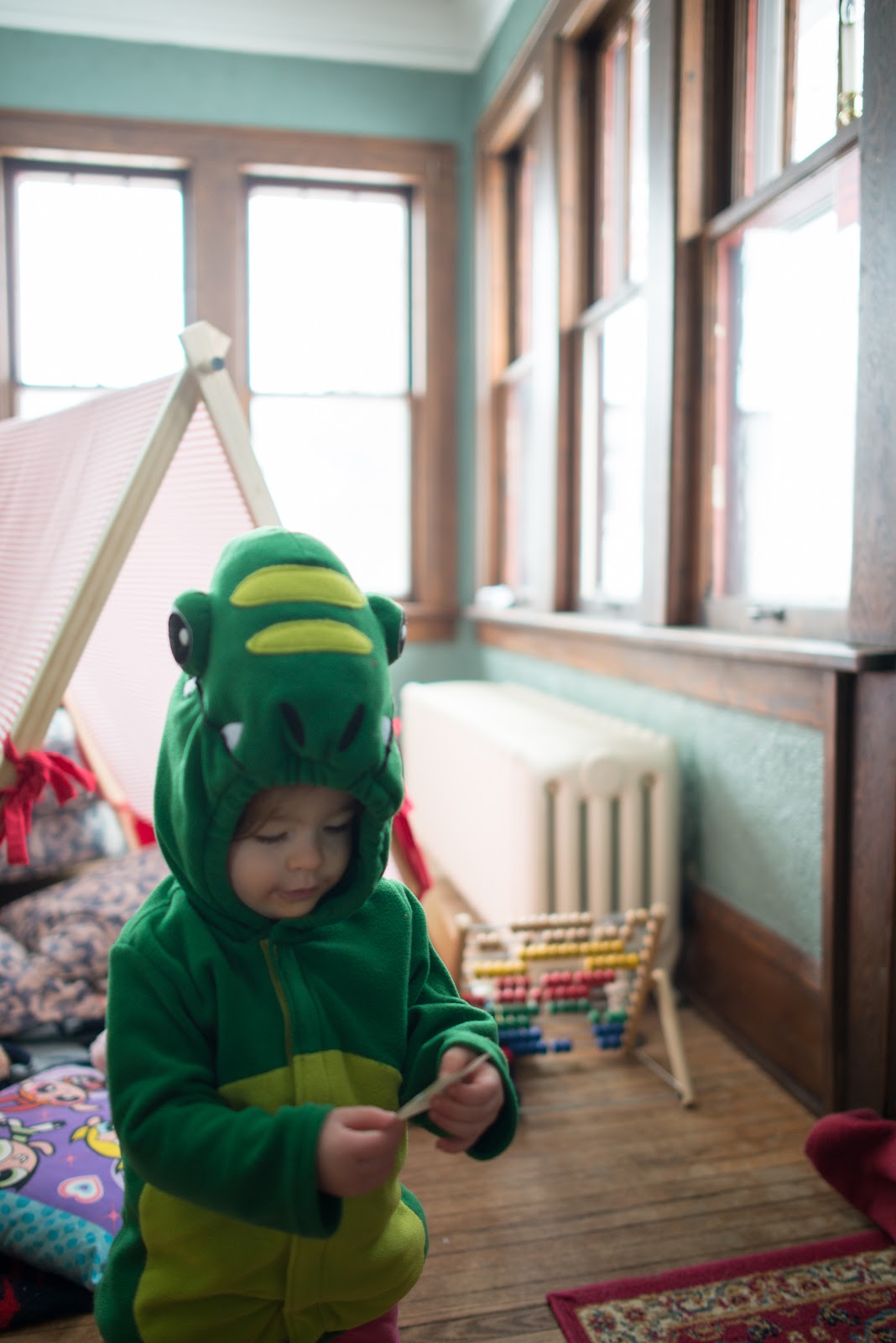 Meadow-osaurus got sick of it after the head got caught on her tent again and again. 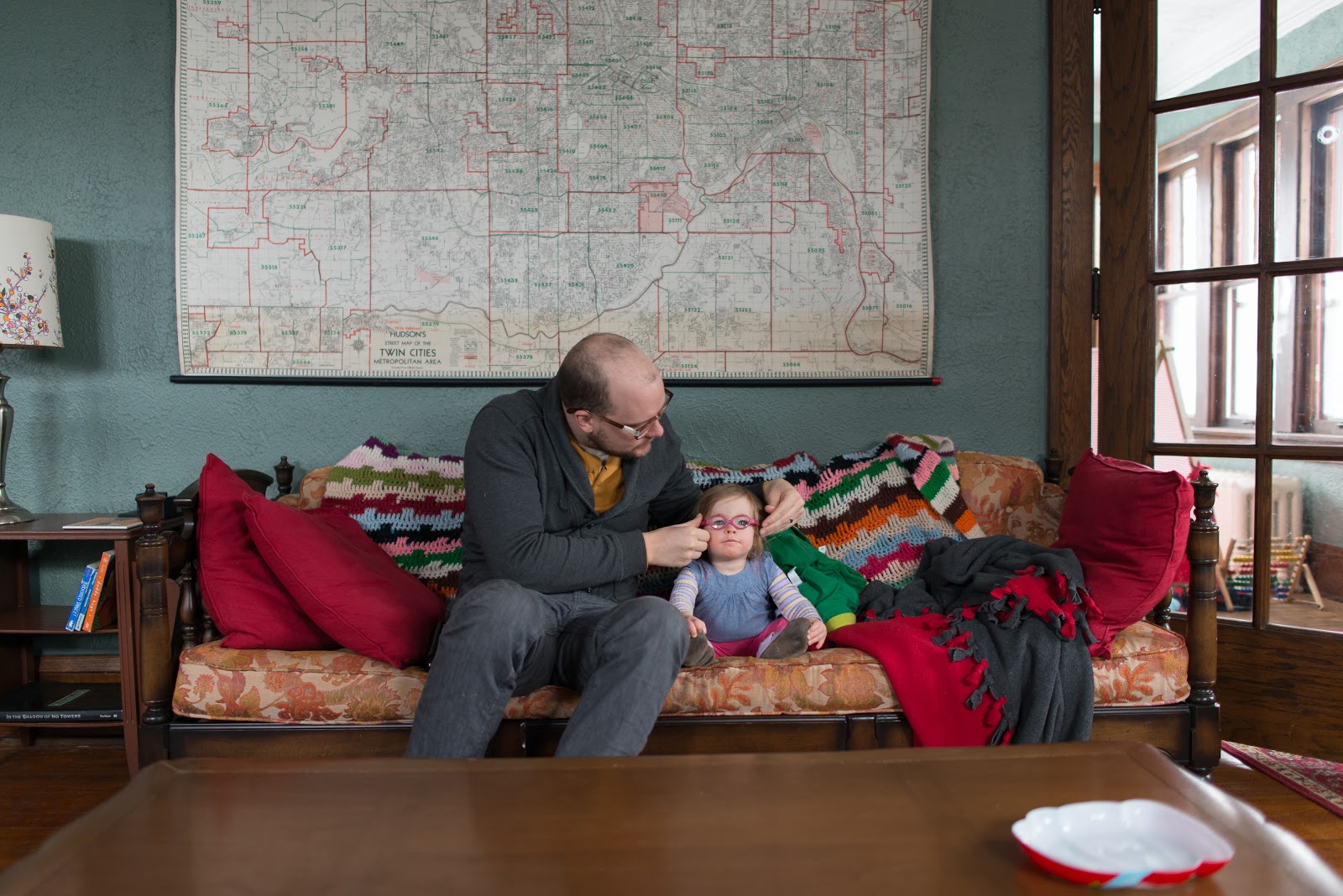 I had a few ideas for the day, but Scott's response was, "But the Packers play today."

Meadow was in total agreement with me. Go Pack go!

You may have noticed that I have tape on my glasses. On Monday we were playing in Meadow's tent when she jumped from the chair onto me grabbing the glasses. She snapped one ear piece right off the frame. I'm now waiting for new frames to arrive. 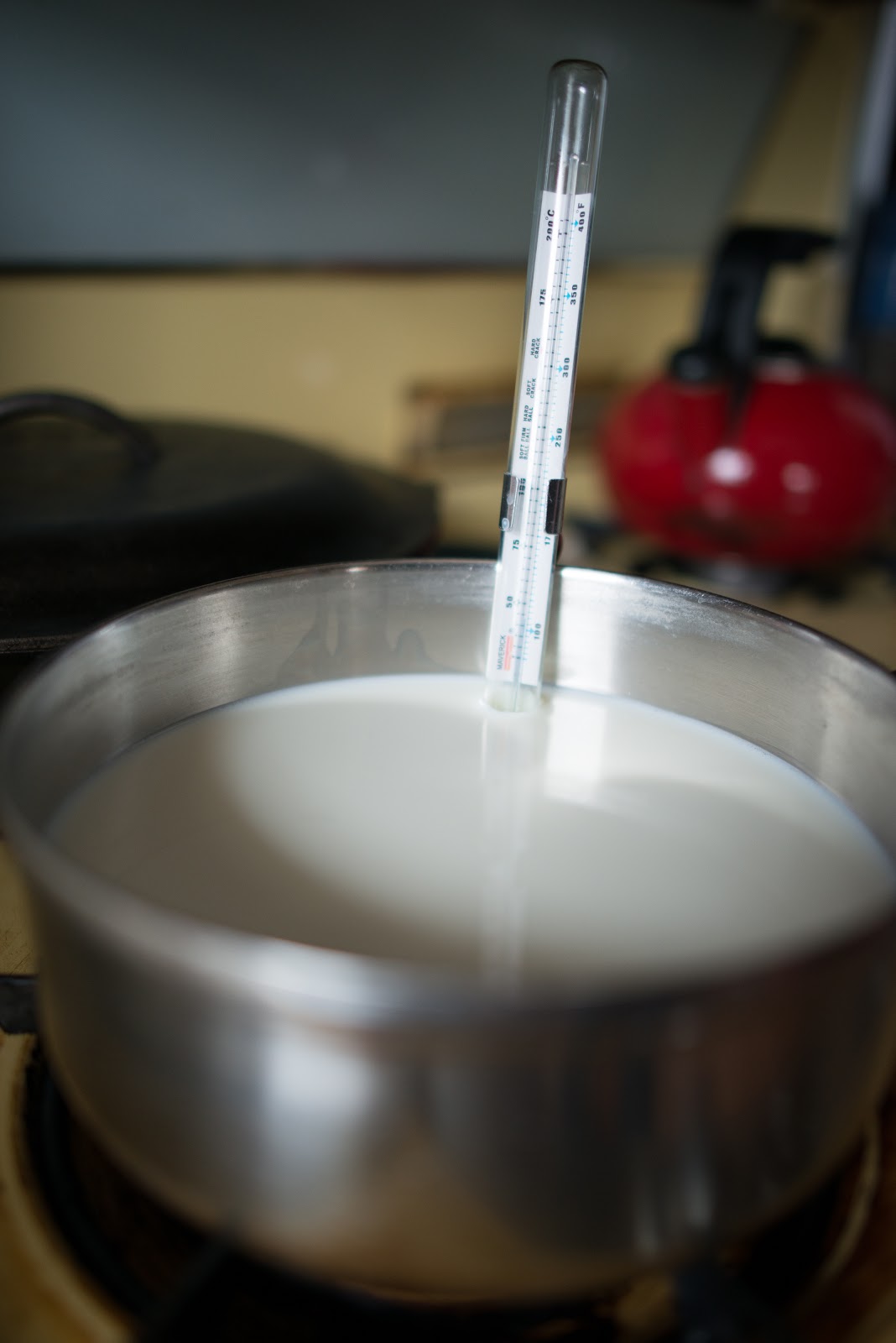 Even though I wanted to go out for the day I realized it was too cold for sledding. I found a few other places we could go to, but they wanted to watch the game. So, I did my own things. First I made yogurt. 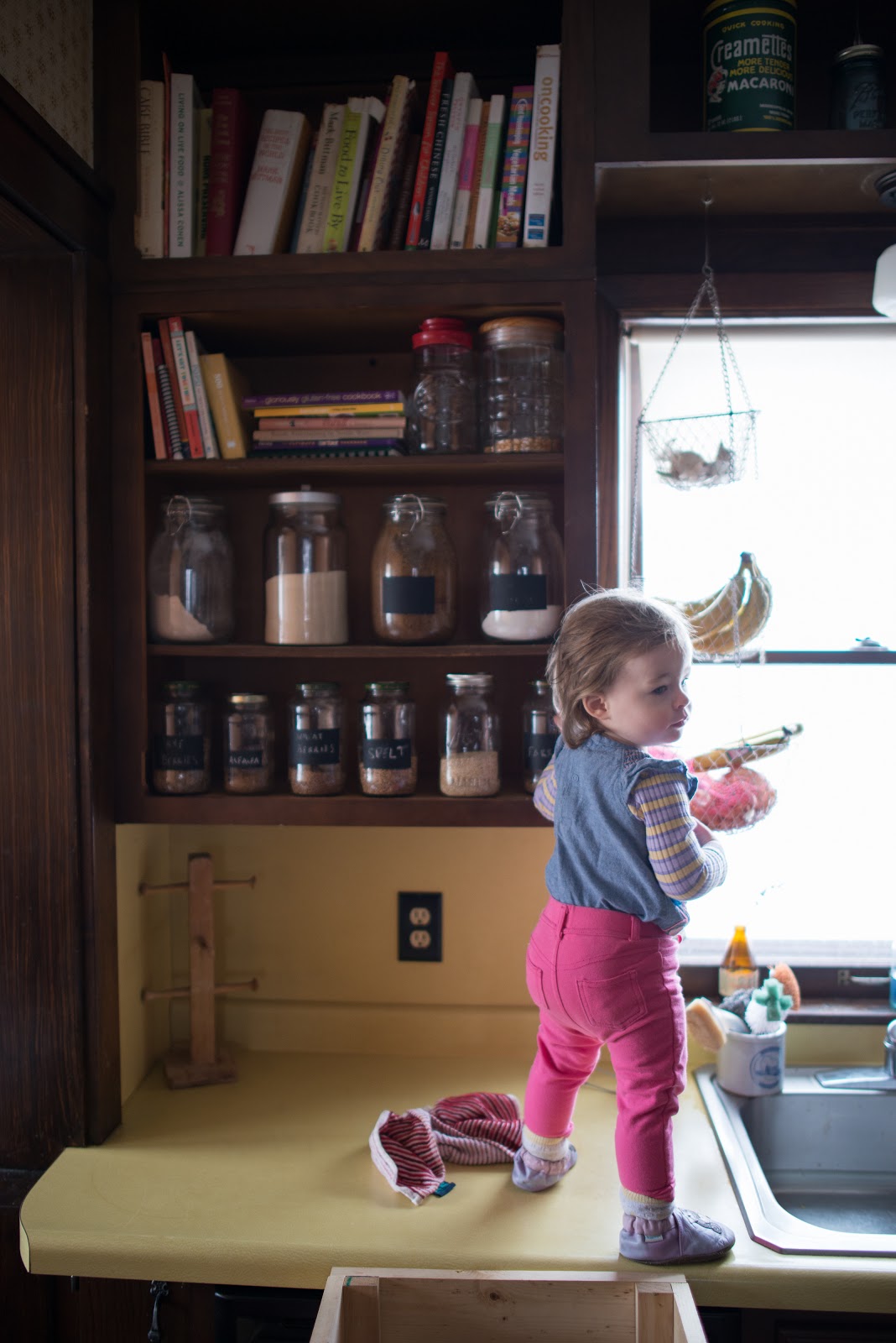 Meadow got bored with the game and decided to climb on counters when no one was looking.

I kind of regret adding the piece of wood she uses as ladder rung. 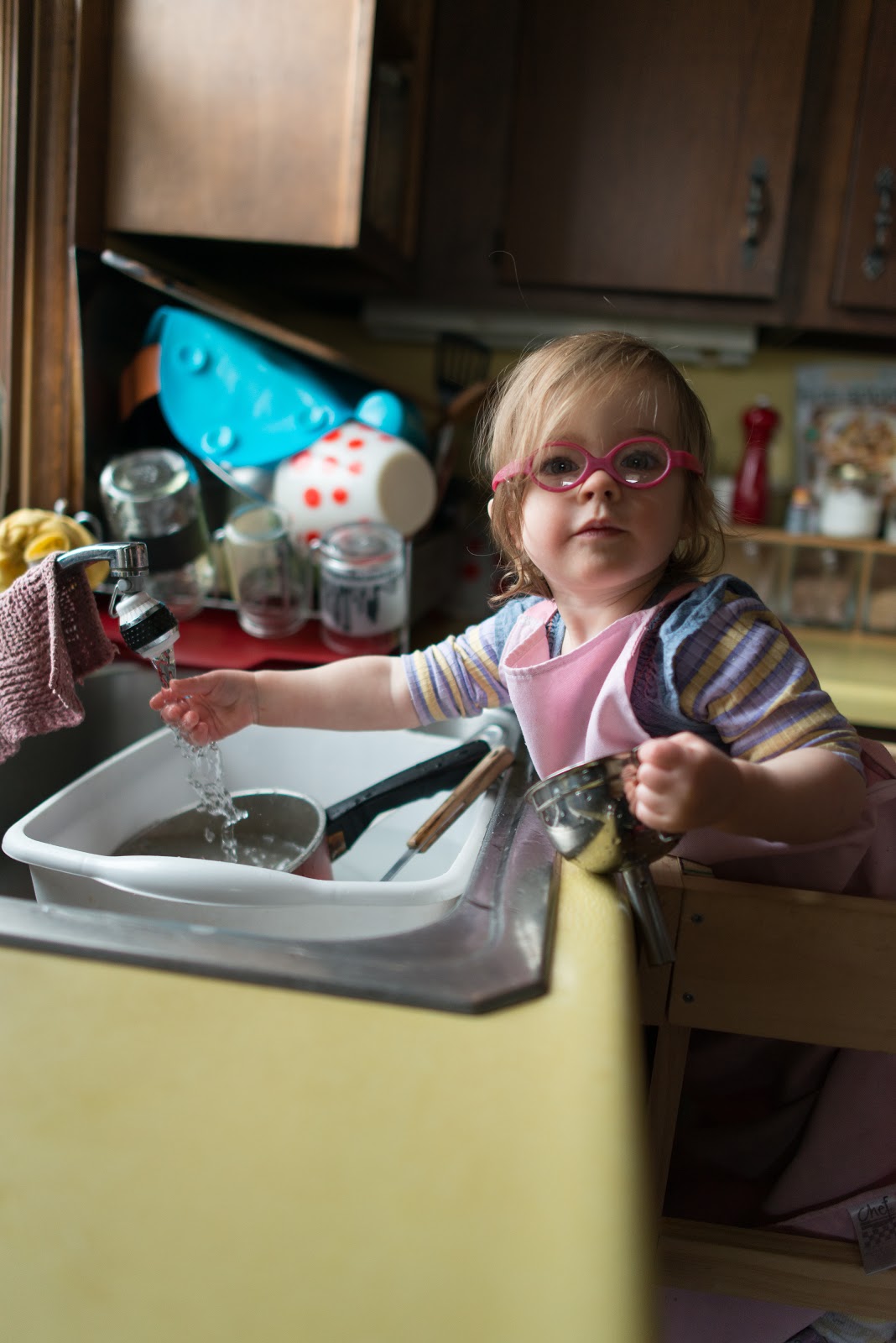 I let her play with water instead. 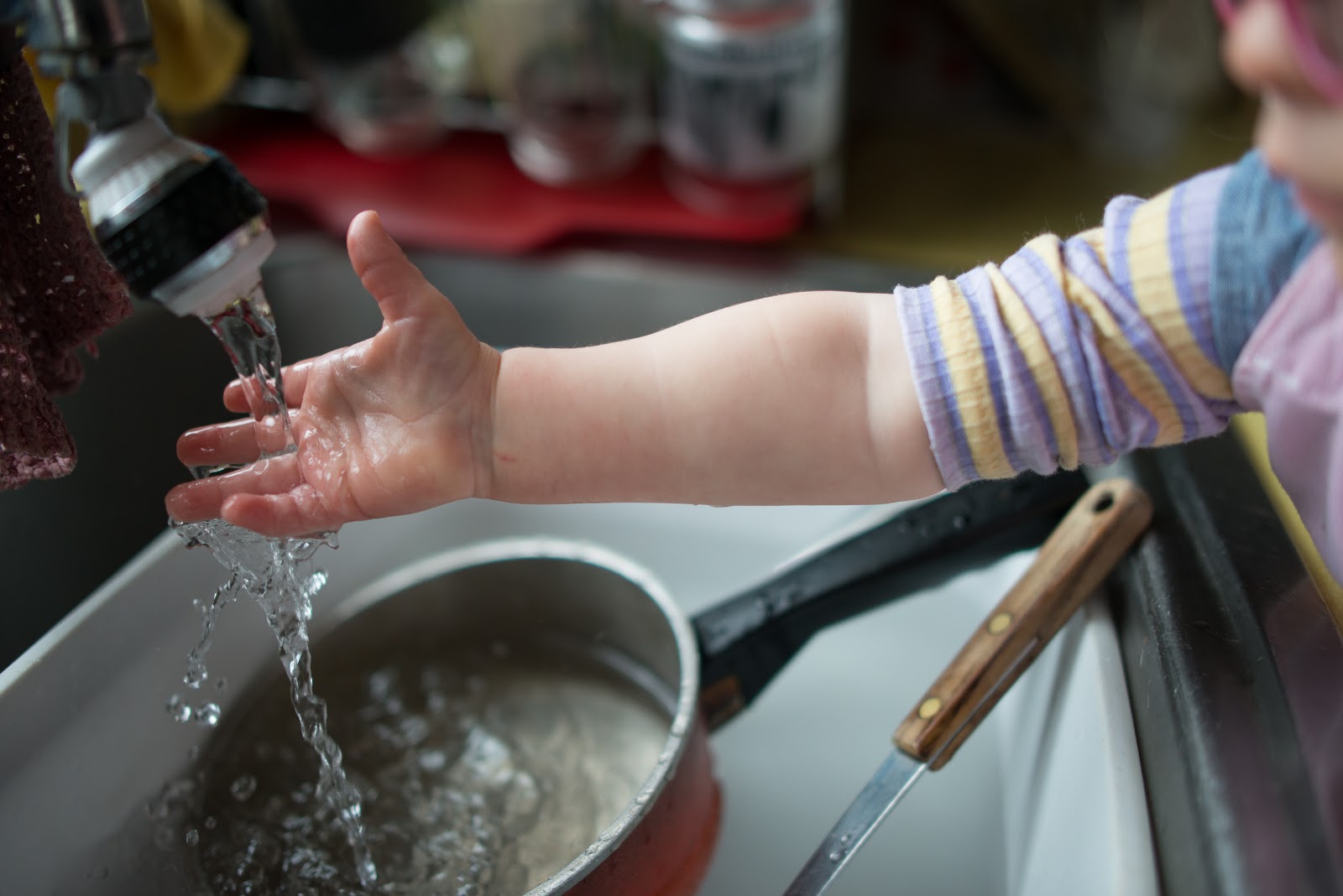 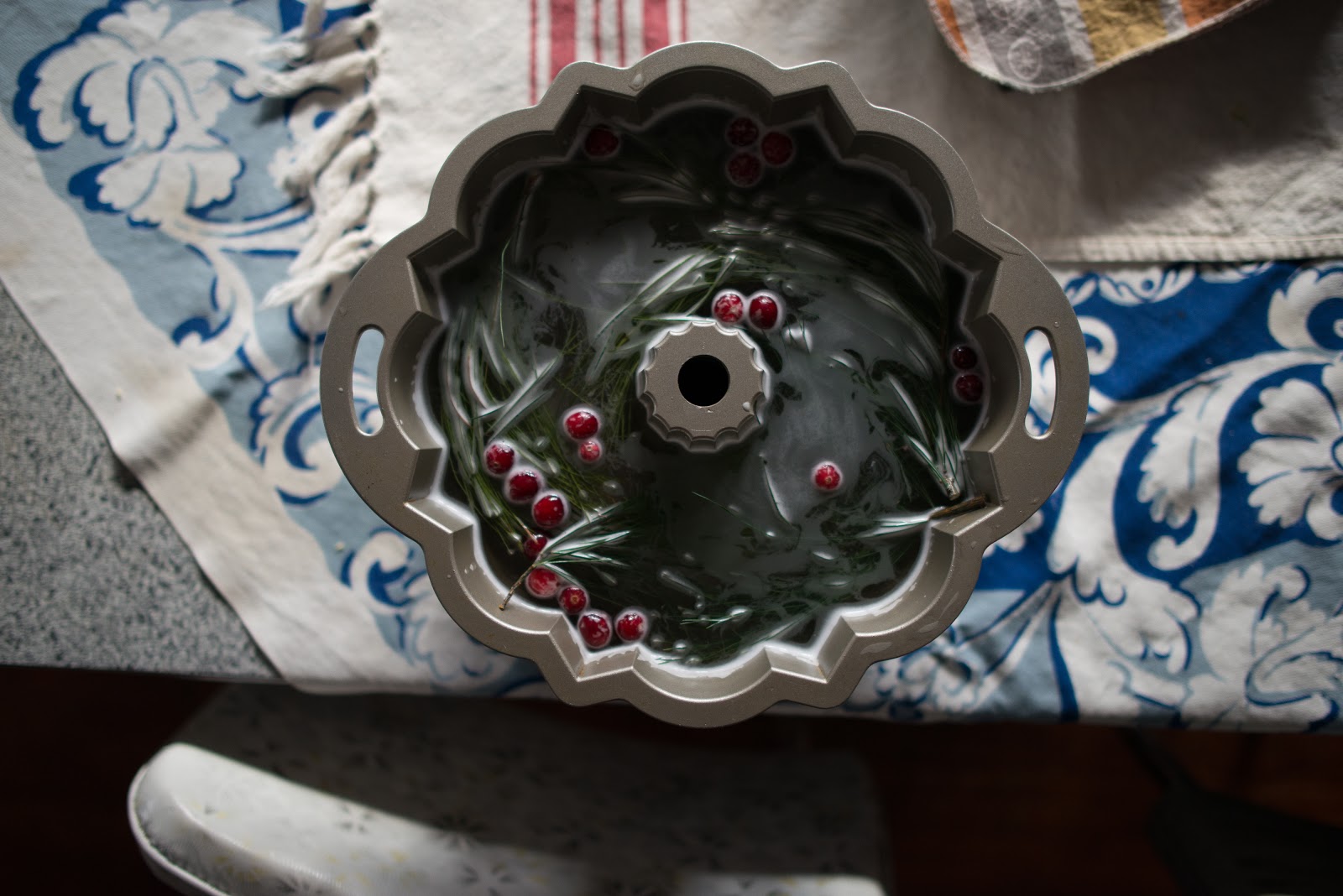 I've seen ice luminaries with pine needles and red berries in them around the internet.

Okay, true. I thought I would give this a shot. The frozen cranberries and pine branches from our Christmas tree just floated to the top. We will see if this works or not. 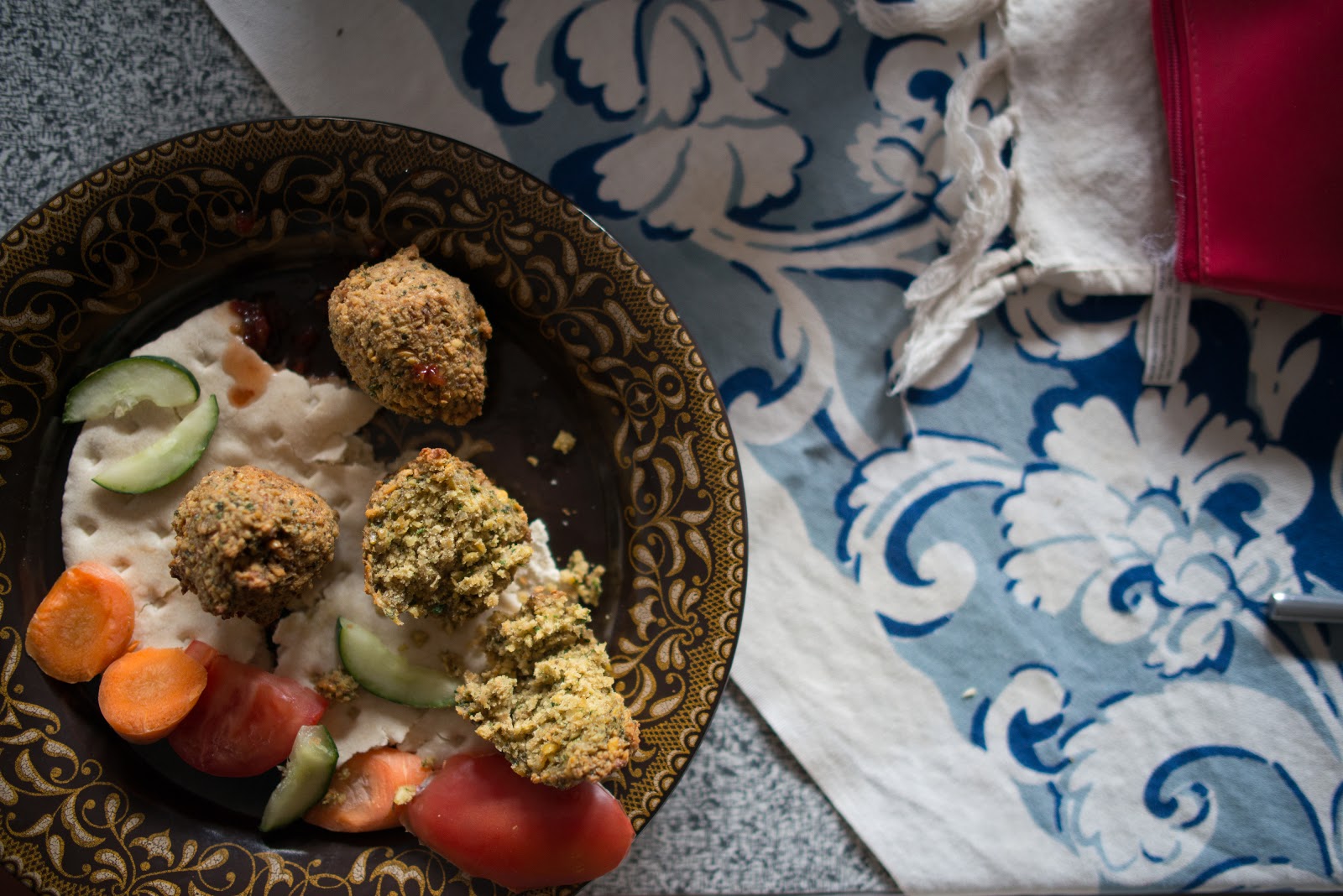 While Brooke went to the fabric store and Meadow slept I made myself lunch. Leftover falafel was perfect for the packer game. I wish my hummus hadn't turned out bad. 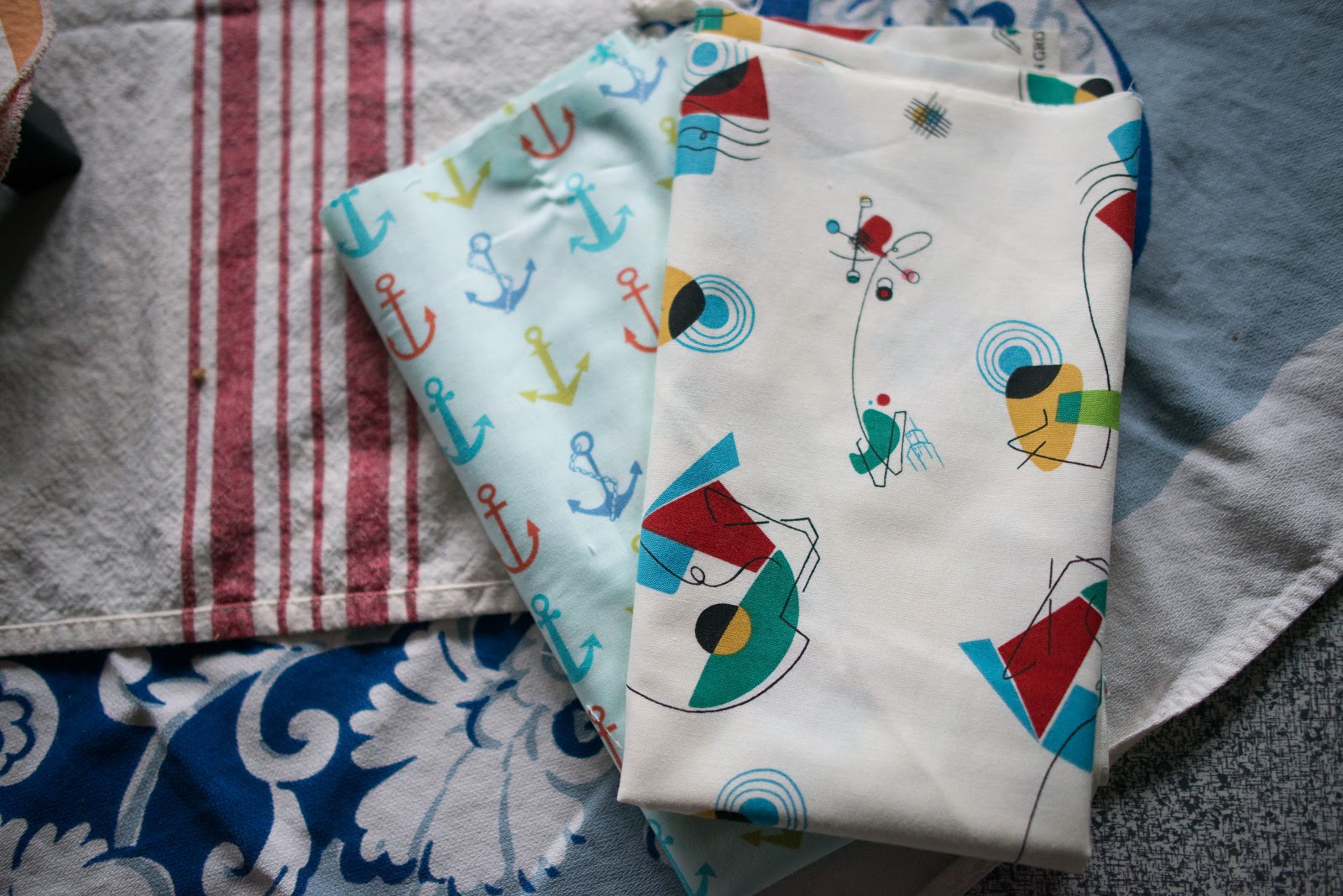 I went over to our local craft store Crafty Planet and picked up some fabric for my first sewing project. I'm already on top of my goals for this year. 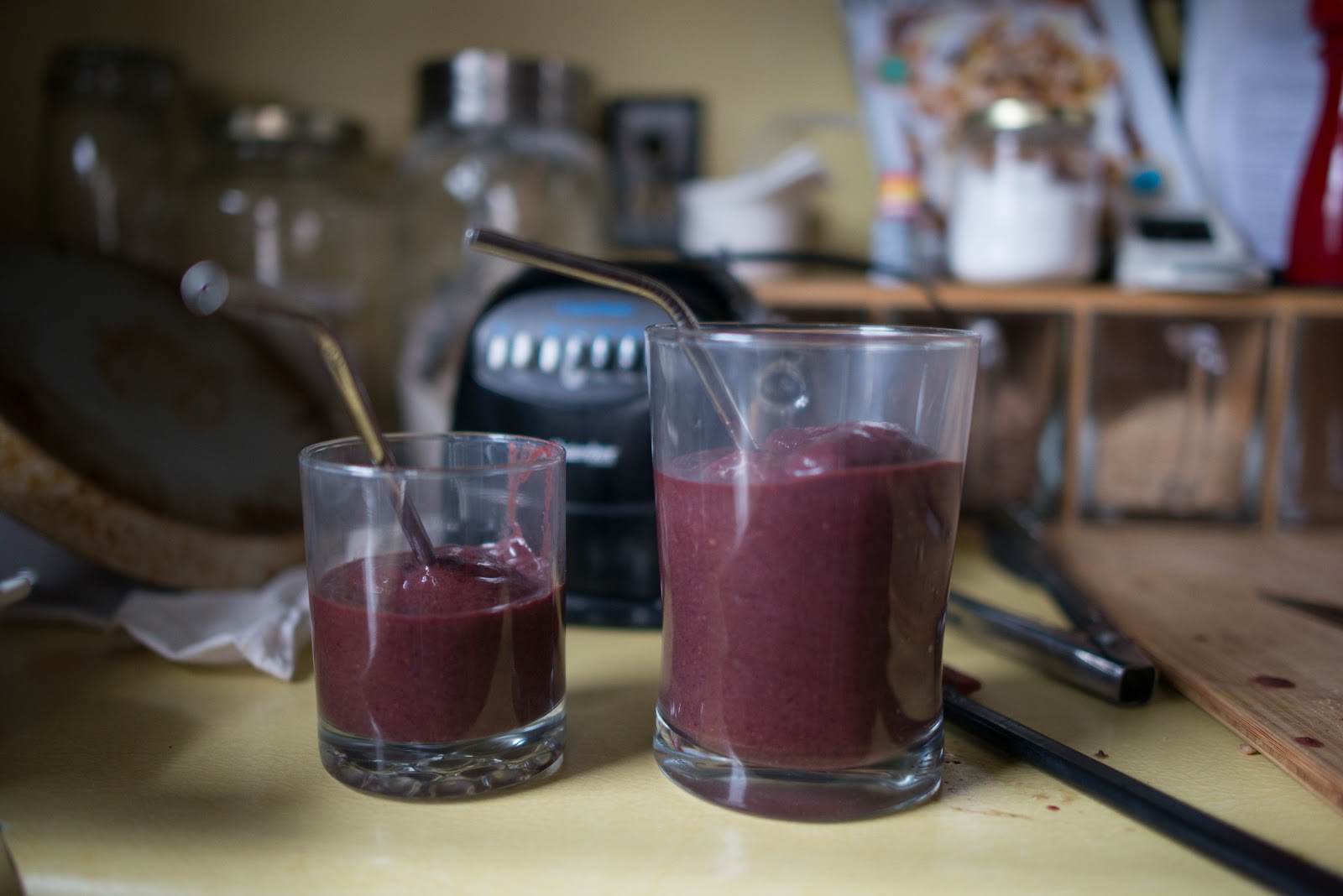 Meadow and I shared smoothies after she woke up. I don't know why, but I seem to only drink these during the winter months. 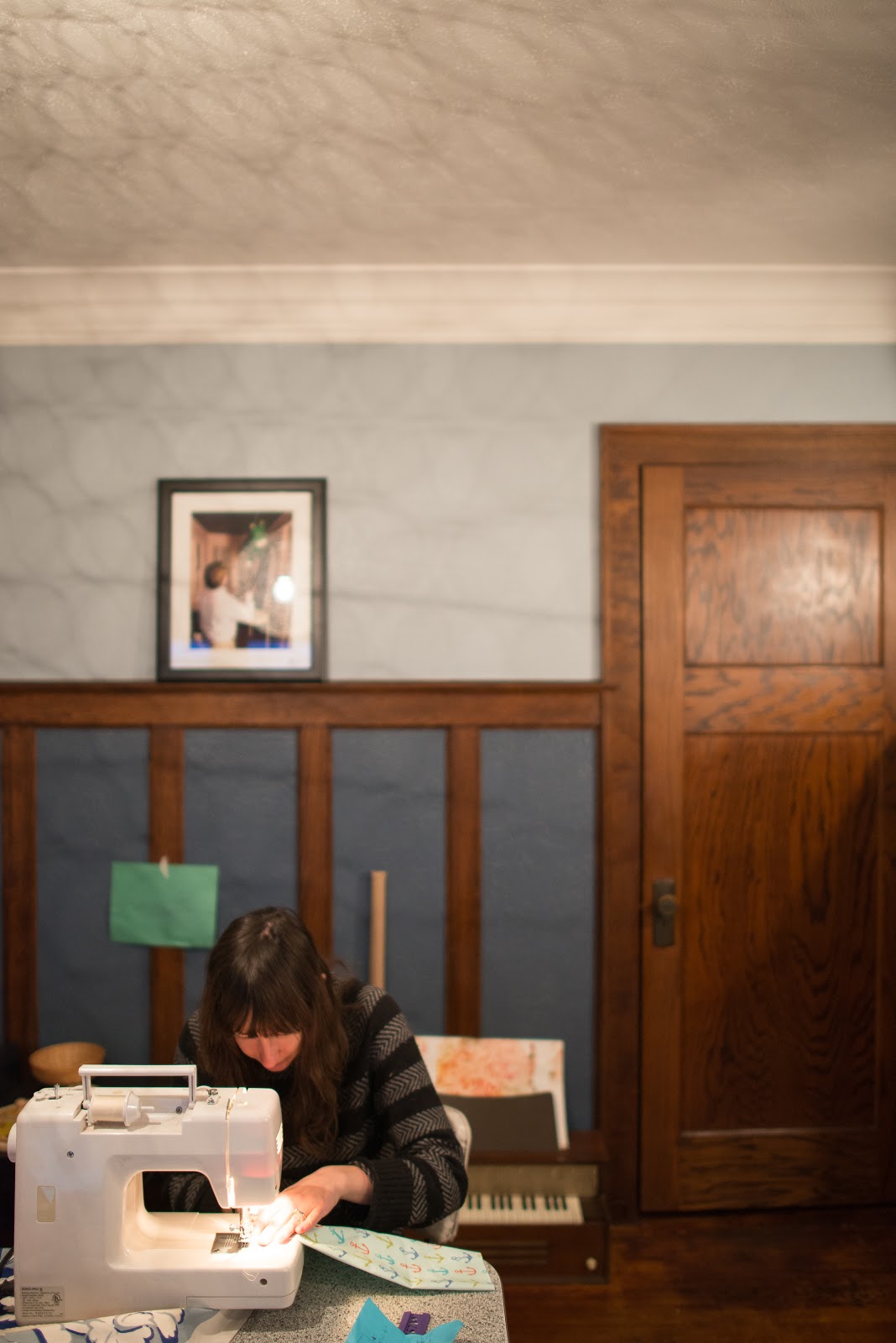 While waiting for our dinner to cook I started my first project. 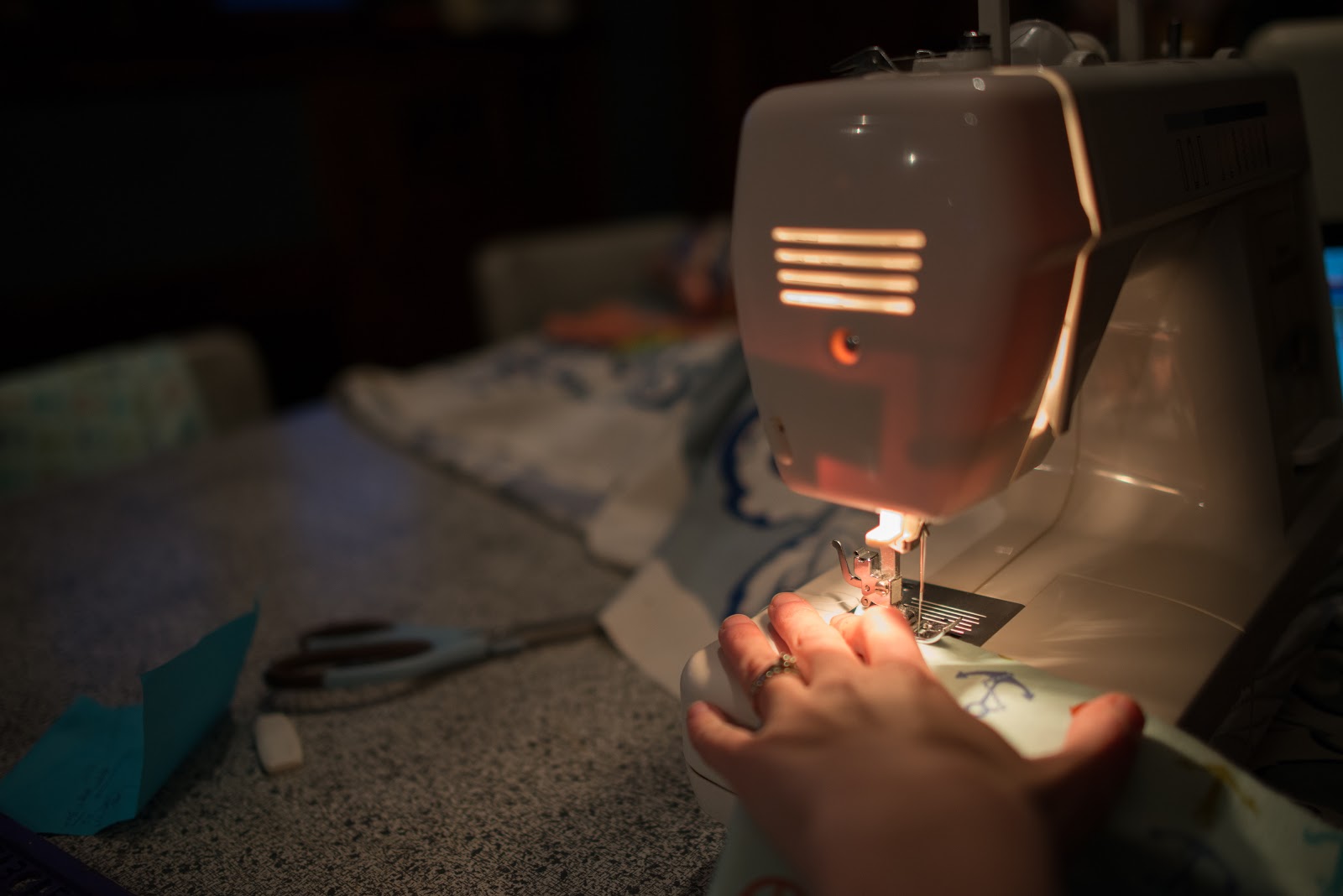 I shouldn't say I don't know how to sew, I used to make pillows all the time in high school. I know the basics of it I just want to learn and make more. 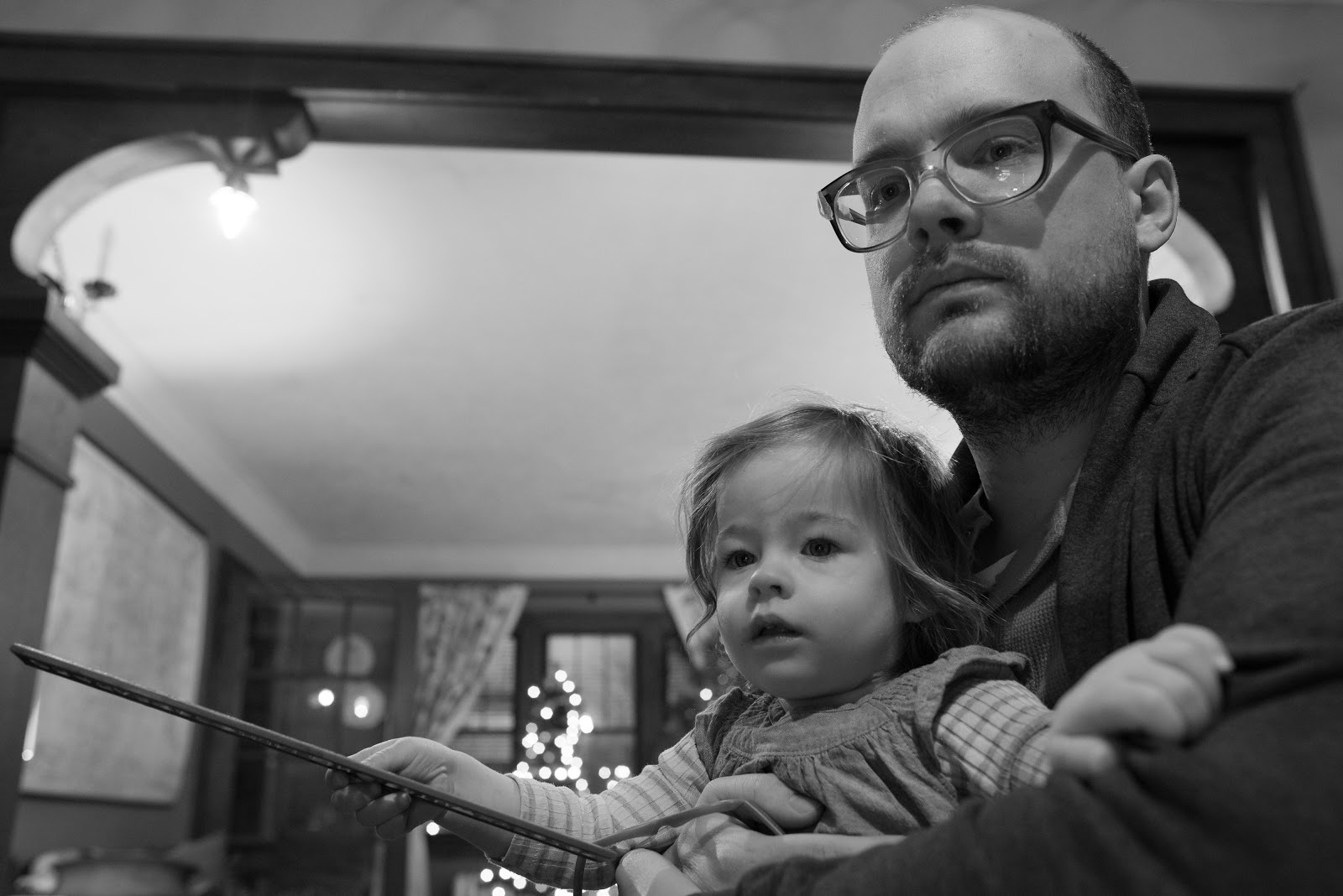 Meadow and I were keen to find out too. Almost as good as the Packers instant replay aided victory. 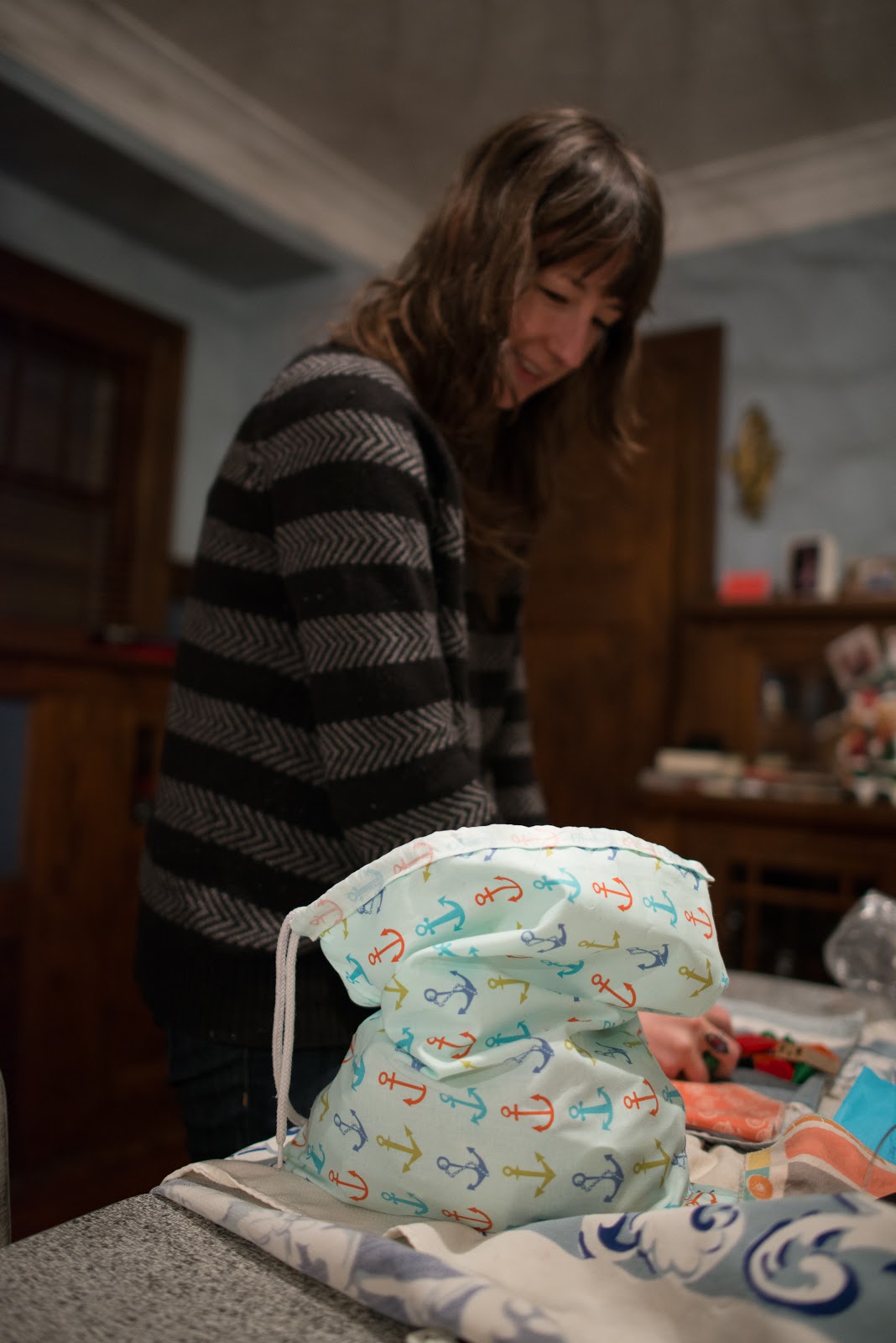 And it was a success. A drawstring bag to hold Meadow's Vacationland toys. I accidentally gave the wrong dimensions when my fabric was being cut so I had to sew it sideways. Oh well. 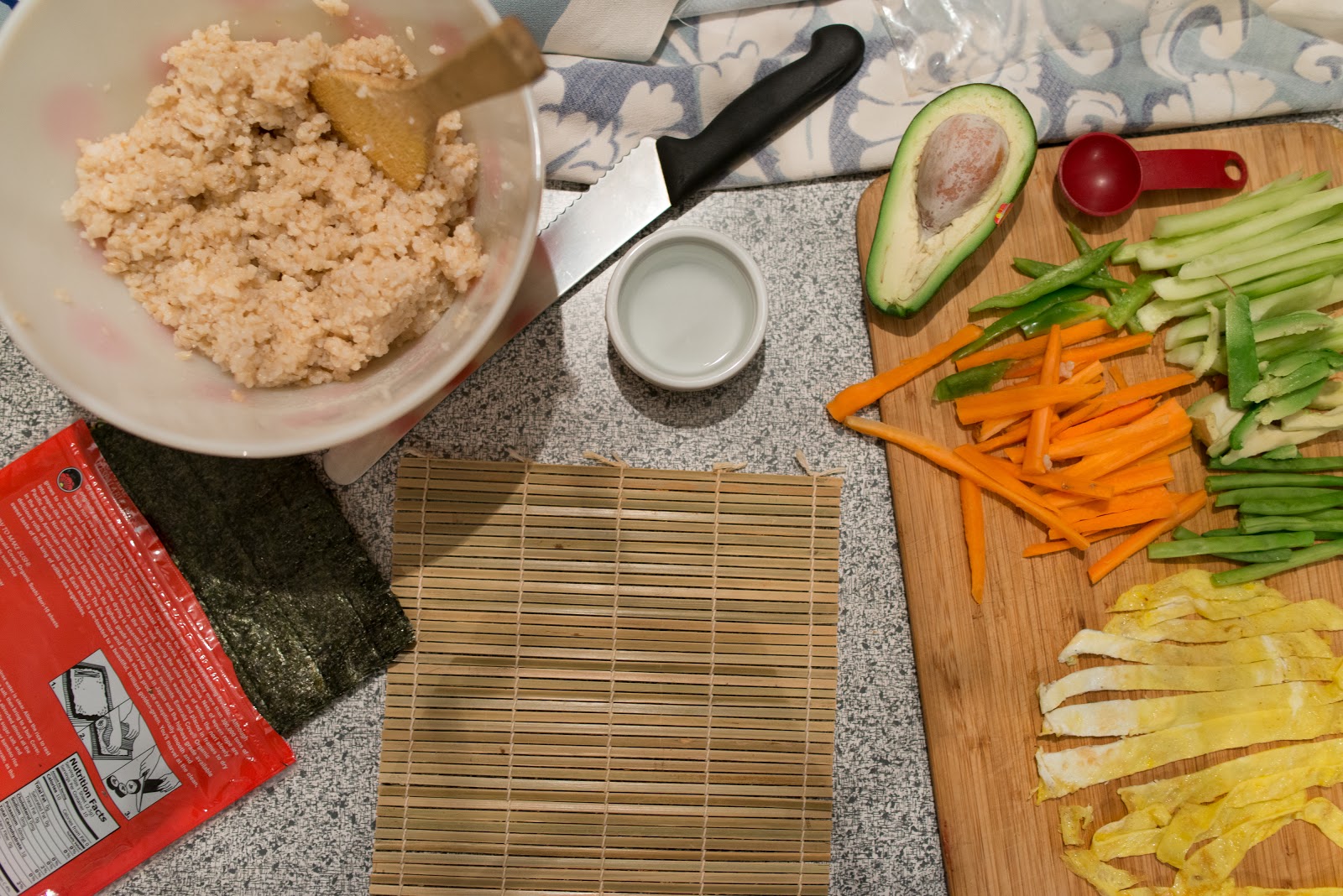 I had been prepping the rice, cutting the veggies and frying a Japanese-style thin omelet while this was all going on. I used brown rice for the first time and worked out alright. 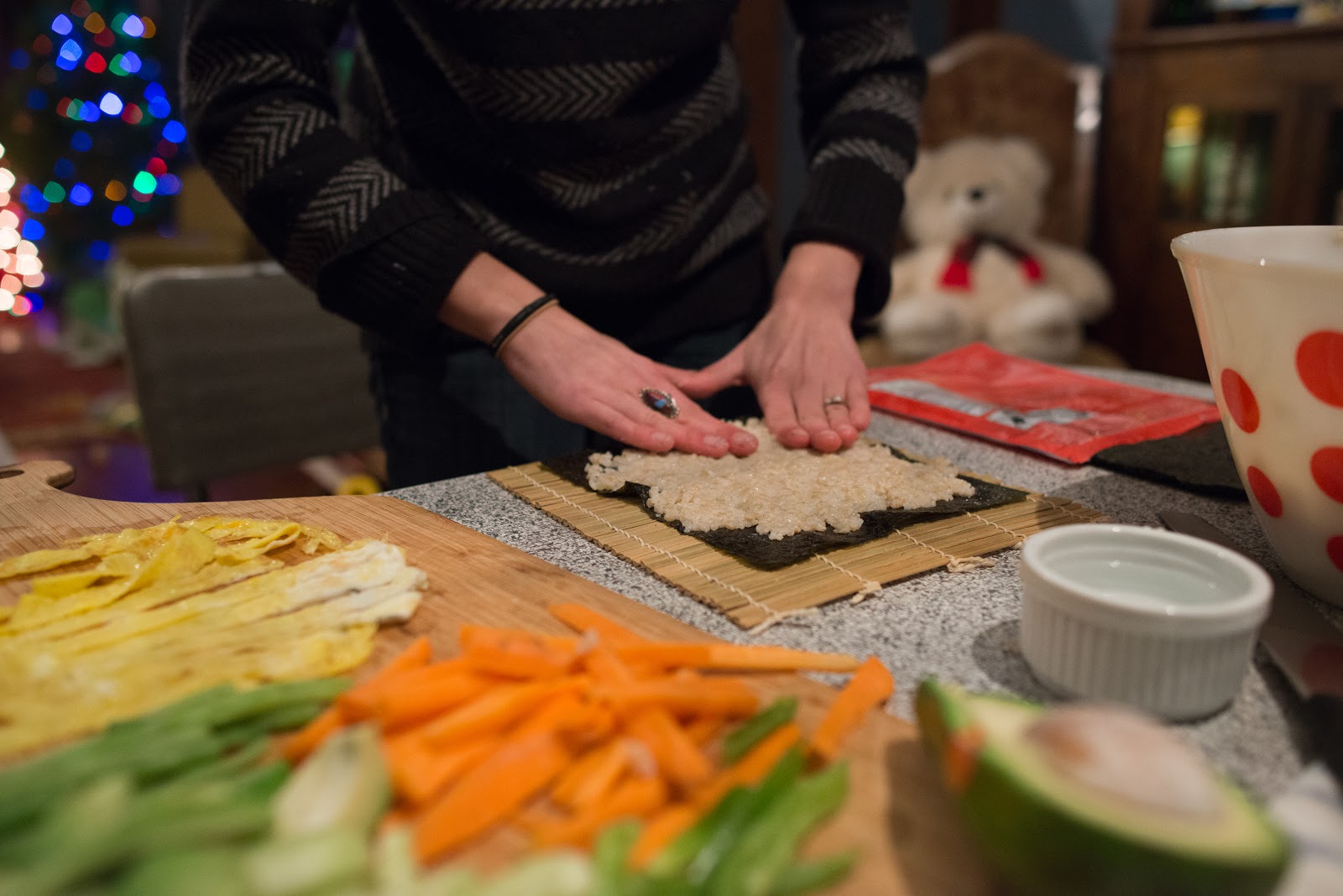 I made Brooke make the first roll. She's better at it. 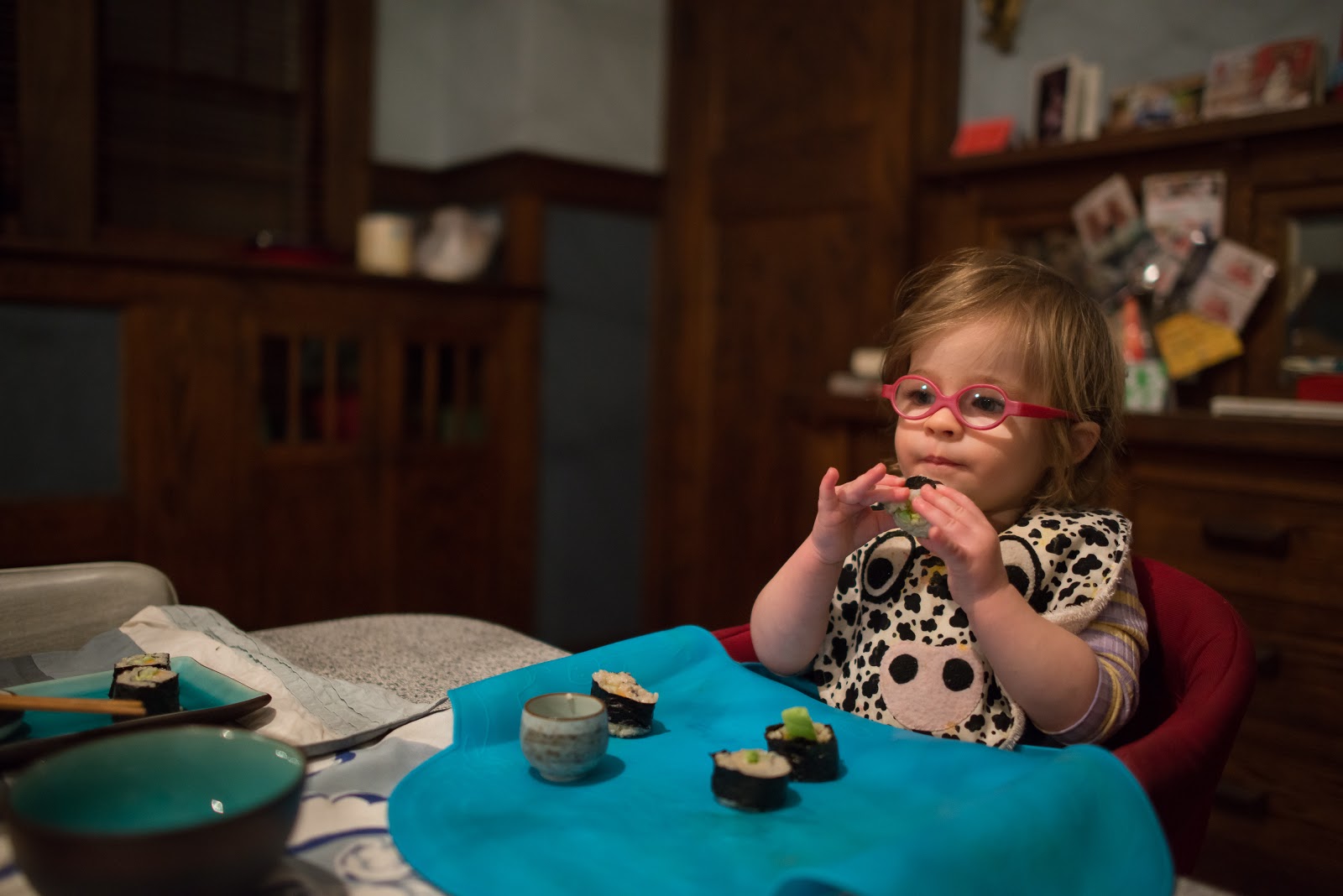 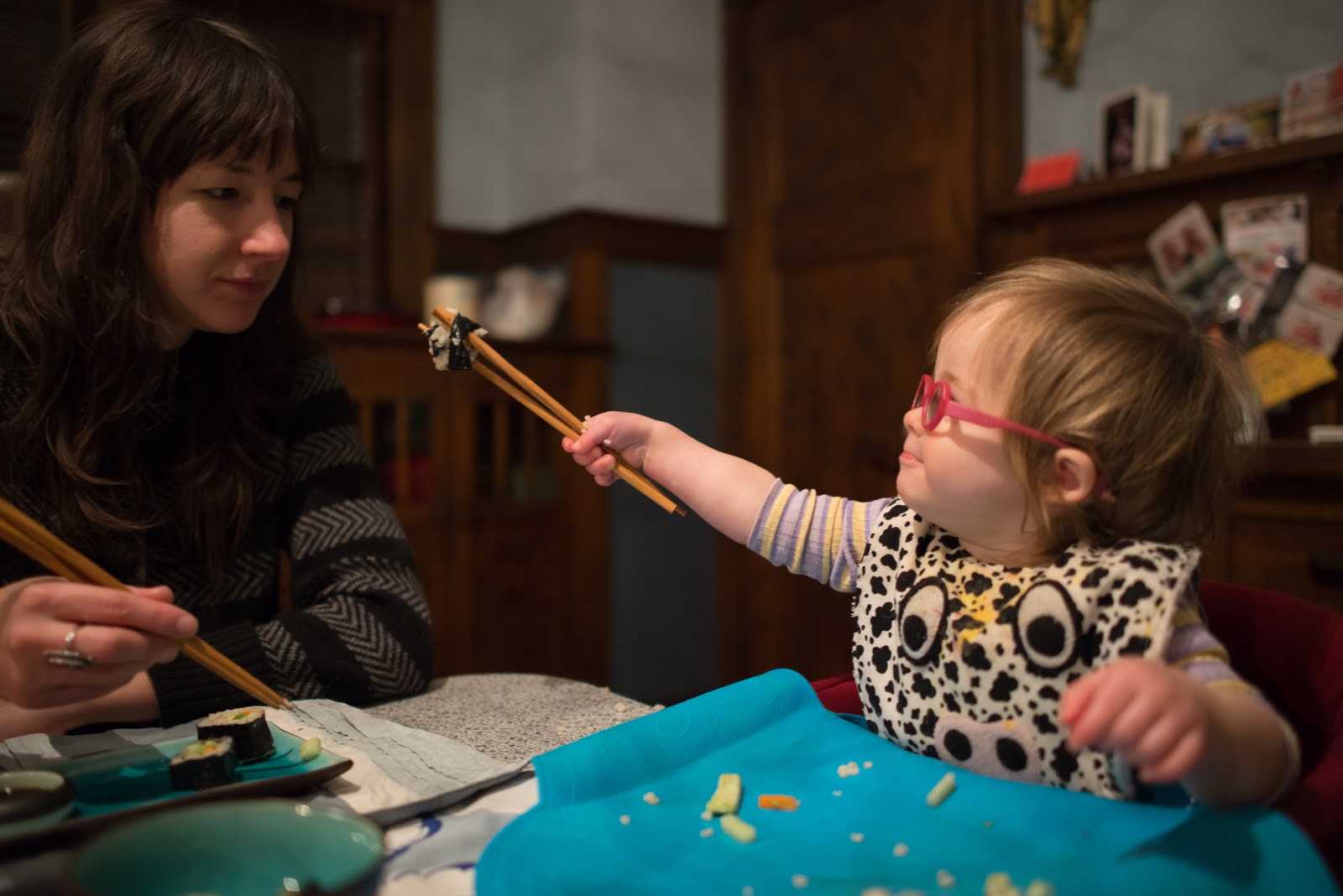 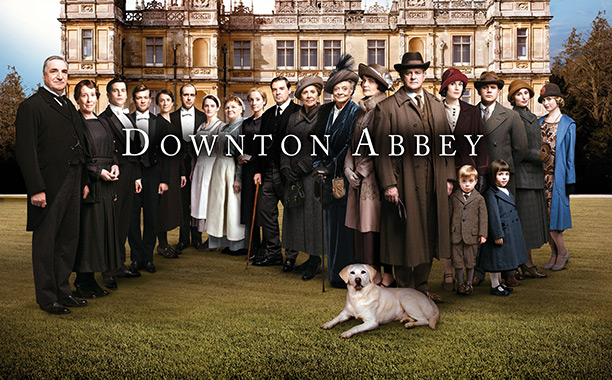 Then we watched Downton Abbey. It's nice to have something to look forward to on Sunday nights again.

Eh. Not as good as a Packers game.