I easily get excited about watching plants grow. I probably check my seedlings at least 3 times a day. I'm happy that my peppers are finally starting to sprout and the cabbage is already growing.

Every week Scott asks me to make him breakfast in bed. He was still in bed when the oatmeal finished so I brought it up to him.

He just likes any excuse to not get out of bed right away. I told him to hurry up if he wanted to find his Easter basket before church.

This was nice and all, but I'd prefer if the two of us had breakfast in bed, together.

That worked because he was up 15 minutes later. He checks the bathroom first.

I looked everywhere downstairs and didn't find the basket on the first pass.

He thinks I hid it in the same spot as last year.

It's a good place to hide things.

I even looked in the nook booths.

And it was under the bed in the guest room.

This and St. Nick's are a lot of fun for a so-called adult.

We were going to head to church with Tyler and Emma, but they had other things in mind. Tyler was up in Duluth recovering from a man's night away from the wife. Olive apparently has very strict sleep cycle, so they couldn't make the 11 am service at Central Lutheran Church.

Lutheran service is an easy transition for a born-and-bred Catholic. I guess I prefer this to a videotaped sermon.

We needed some coffee for our brownie recipe. Brooke decided to gank some church brew.

When we got home from Easter service we ate our candy. A lot of our candy.

I got started on brownies as soon as we were finished noshing on malted milk balls. I was actually disappointed that Ikea wasn't open this Easter for its famed brunch. I was really looking forward to it after last year.

Scott wanted to point out that the vanilla extract was gluten-free.

My OCD-self noticed the baking cabinet was looking a little messy.

She even vacuumed it out. How Brooke.

While cleaning that out I noticed I have 13 different kinds of flours. After I took this picture I remembered I had chickpea flour in the fridge which brings it up to 14.

On our last grocery shopping trip, Scott jammed as many chocolate chips as he could into the jar.

They were on sale.

Now organized by flours on the bottom, liquid and other dry ingredients on top.

I whipped together some leftover noodles and crumbled meatballs/tomato sauce for lunch after we decided we didn't want to go out for brunch.

I hung out outside while my brownies baked and Brooke hung laundry.

She told me to take a pic of the tulips. I'm not really that good at taking pictures of flowers.

Peanut hung out on the planter.

Our herb garden continues to sprout: Tarragon, oregano and...

a cat are already growing

I had to put the brownies in a smaller container then is asked, so they turned out super-thick.

I thought we could listen to some Christian-indie rock since it was Easter. Thanks Sufjan.

Once the brownies were done I moved onto to the main course: Lamb Tangine with Prunes.

"Take my picture of me being cute."

Brooke made our side dish, some kind of chard concoction I picked out.

Just as we were about to leave, Peanut tried to escape.

Then we headed over to Tyler and Emma's for dinner. Olive likes to make this face whenever Scott is around.

I don't think she likes me.

She's definitely used to a camera being in her face.

She edited this one herself.

When we arrived we threw the tangine back on the stove and cooked some couscous.

Emma did up her table real nice like for our Easter celebratory meal.

Emma made her now-famous no cook carrot cake in the shape of an egg.

Olive and I played hide and seek. She used her napkin, while I used my camera.

The iPhone took over the dinner conversation...like usual.

Tyler sweet talked me into following him to the airport to the drop off his rental car. I was a little tipsy, so I caved in.

And so I followed him the fifteen or so miles to the airport.

At the drop off garage I had to wait in a different lot so I didn't puncture my tires. Some rental car worker yelled at me until he realized what I was doing. Eventually we left the strange futurism of airport land.

After they got back Tyler eagerly turned on the TV to watch Celebrity Apprentice.

We're not sure what his weird fascination is about. 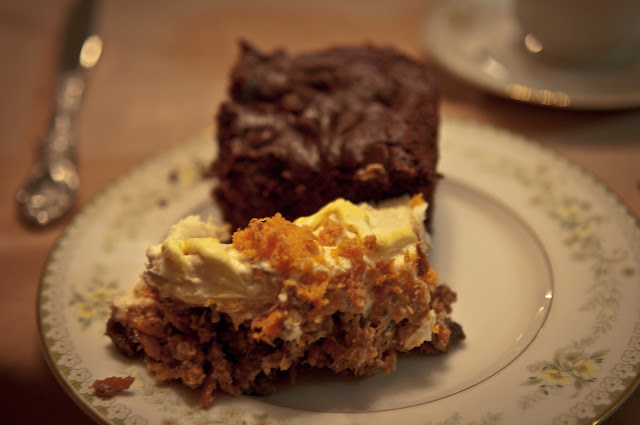 Then we had our dessert. Raw carrot cake and white sugar free brownies.

I think the carrot cake won best dessert. I overcooked the brownies, so they were slightly dry. The next day Brooke put some ganache on top and all was well.

Amanda said…
I love the fact that you two hide Easter baskets. I hope that you got one too Brooke!
I was a little disappointed that I didn’t get to hear what was in the basket.

Do you get gluten-free because one of you needs to have it or because you know its healthier? The cupboard looked very nice.

Scottie and Brooke Tuska said…
I did not get Brooke an Easter basket, I guess I should next year. We share what's in it, but we got malted milk balls, jelly beans, chocolate covered raisins and cadbury eggs. She also got me tape for my bike handle bars.

Our friend Emma is on a gluten-free diet, but we don't really make an effort for ourselves. We eat a whole heck of a lot of gluten every week. I was just pointing it out for Emma.
11:57 AM, April 16, 2012