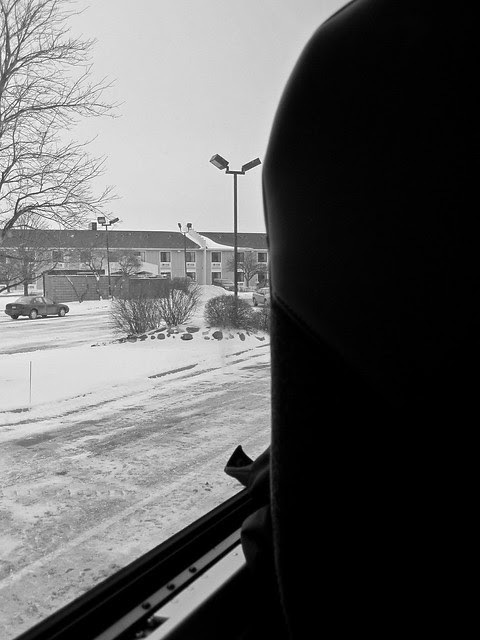 I headed out of town to meet up with Scott's sister (and my sister-in-law) for wedding type related things in Chicago. We just have one car so I took the Greyhound down to Illinois. I hadn't been to Chicago in years, I was pretty excited to be going. 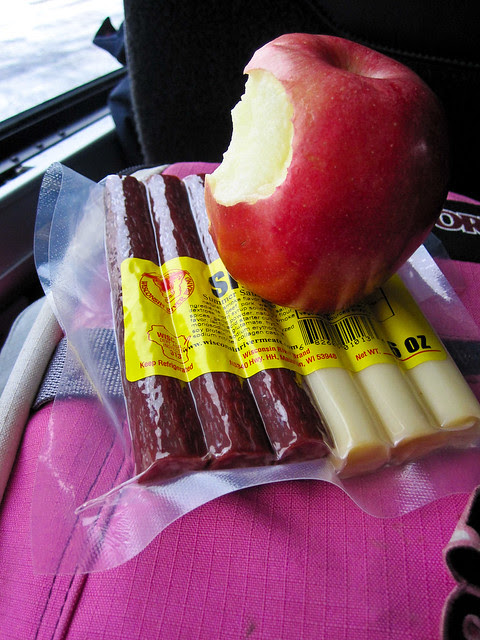 The trip takes one quick stop at a McDonalds. I ran over to the nearest gas station and chose a different option for lunch.

That night I stayed with Katie's friend Allison and this pretty little miss. They drove an hour just to pick me up from the bus stop. What nice ladies. 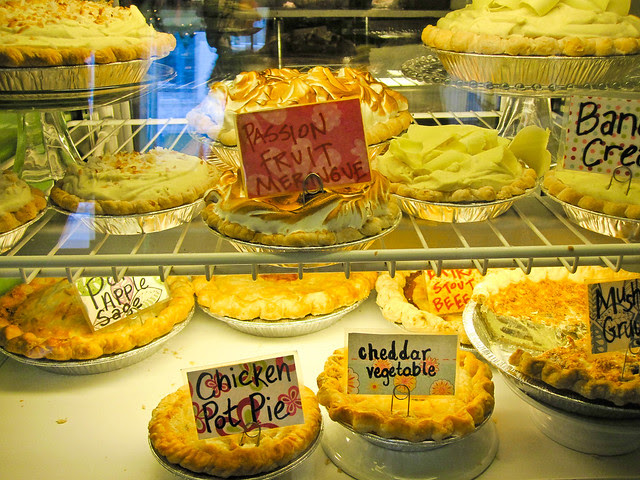 Katie is having pies instead of cake for her wedding dessert. We met up at Hoosier Mama Pie Company for breakfast and tastings the next morning. 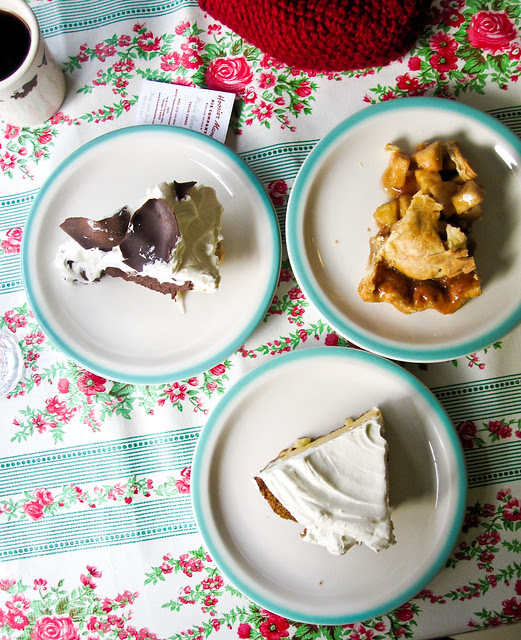 The pies were delicious and are made from scratch every morning. 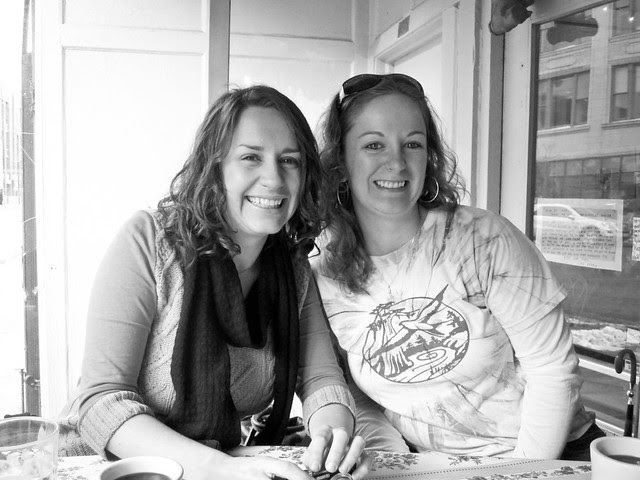 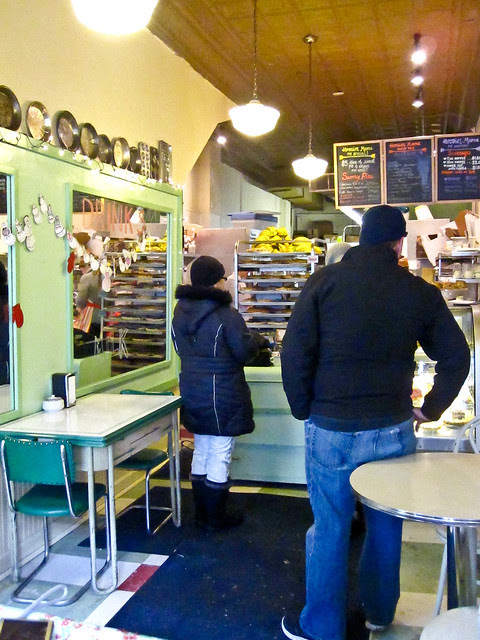 Their store is so tiny and so adorable. There were like 12 people working in the back no one was running into one another. 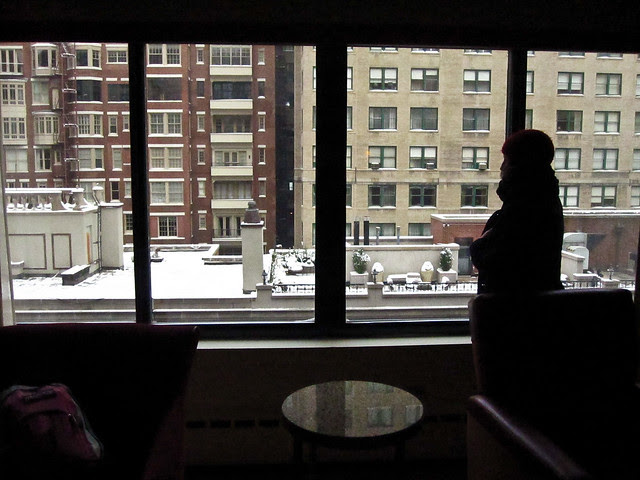 We got a hotel at the Residence Inn downtown. 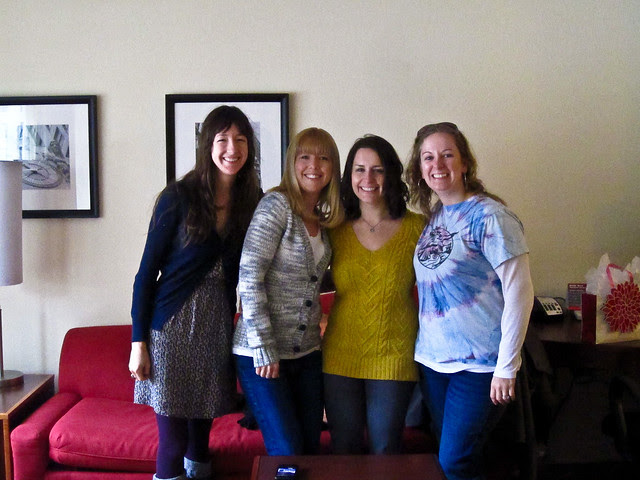 My roomates for the weekend (minus one).

Then we headed downtown to do some bridesmaid dress shopping. Katie is letting us pick whatever gray dress we want. I've been pretty lucky being a bridesmaid. I've been able to choose either the color or style I wanted in every wedding I've been in.

The dresses we chose. 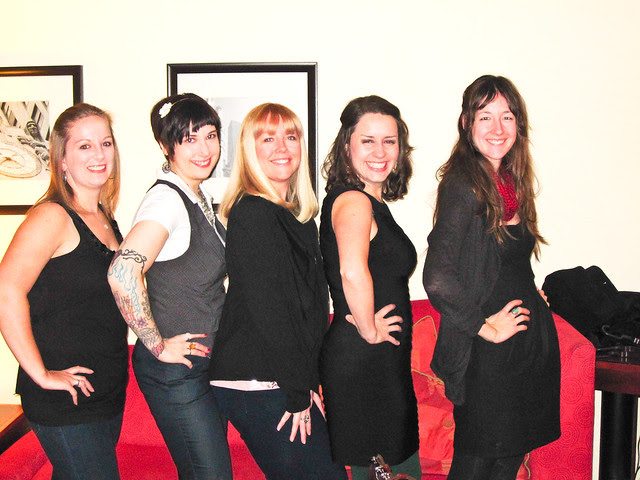 Later we got gussied up for a night of food and drinks for Katie's bachelorette.

We met up with some other ladies at Francesca's Forno for some yummy Italian food and champagne. 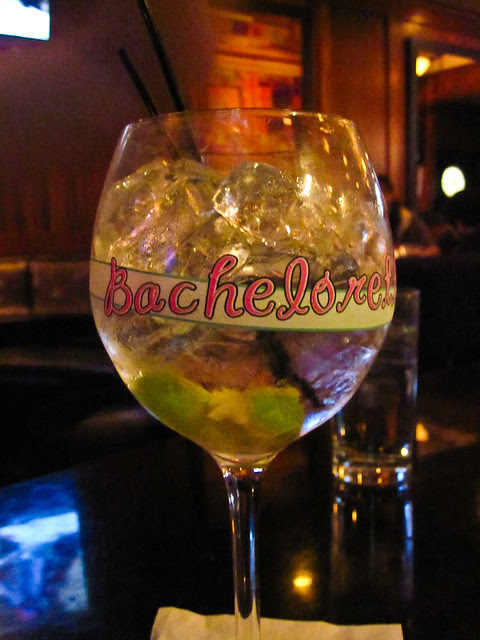 After dinner we went to a few bars near the restaurant for drinks. 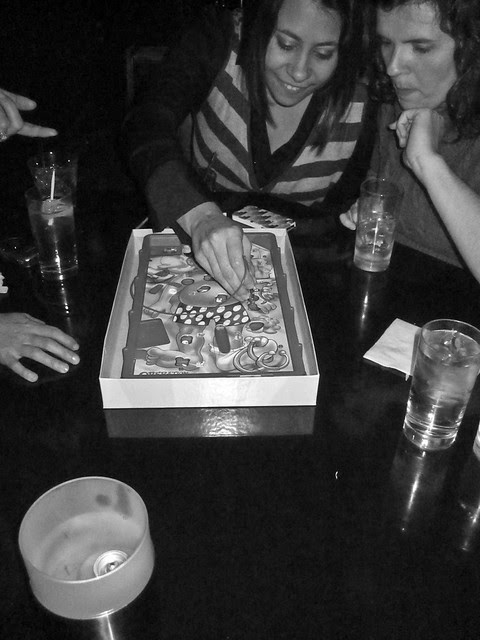 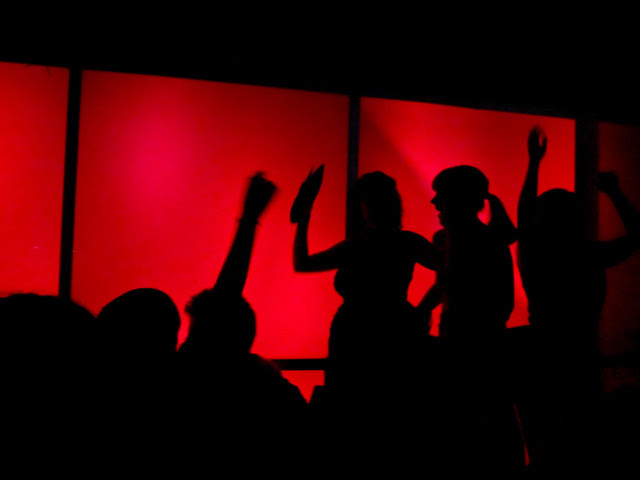 The next morning I headed back to the bus stop for another 8 hour ride. 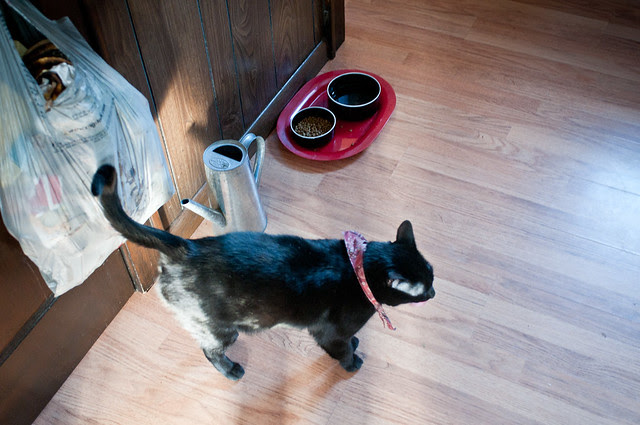 While Brooke was heading back from Chicago I got up to hang out with some Cudahy friends who were in town. 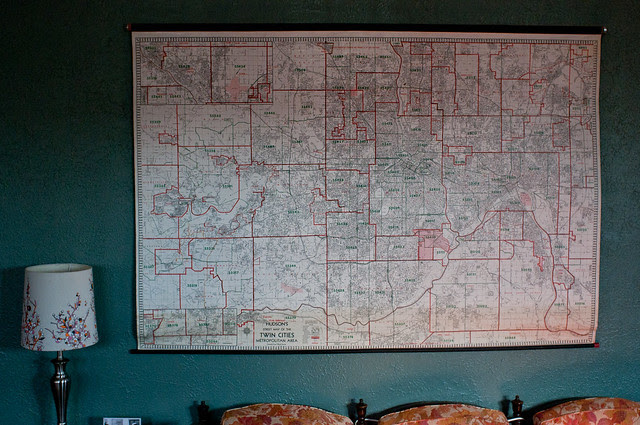 I thought I'd show you guys the map I've been meaning to hang up for months. While Blake was here last week we concocted a means to hang it up and used my new Milwaukee drill in the process. 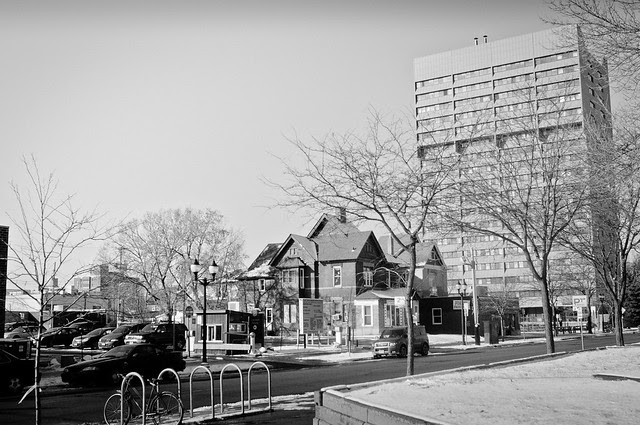 I quickly headed over to Dinkytown to meet up with my high school friends. The house on the left was my home for one school year and my hangout for two. I fondly remember spending April and May in the parking lot playing frisby and shooting the shit with the roommates.

This is where Scott was living when we met. And where I hung out on visits to Minneapolis. The few times I came here I had no idea Scott lived there or even existed. I actually miss that place. 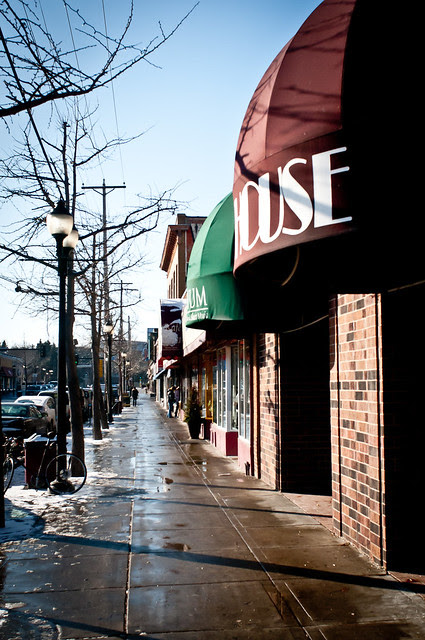 Just a half block over from my old place is the Dinkytown main drag. 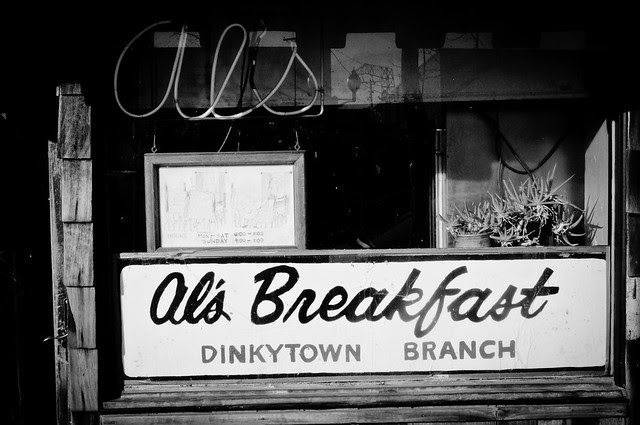 Blake and I went to Al's during his week in Minneapolis.

The smallest restaurant in Minneapolis is my favorite breakfast joint in the Twin Cities. More often than not, we skipped the line at Al's and headed over to the now defunct Dinkytowner. 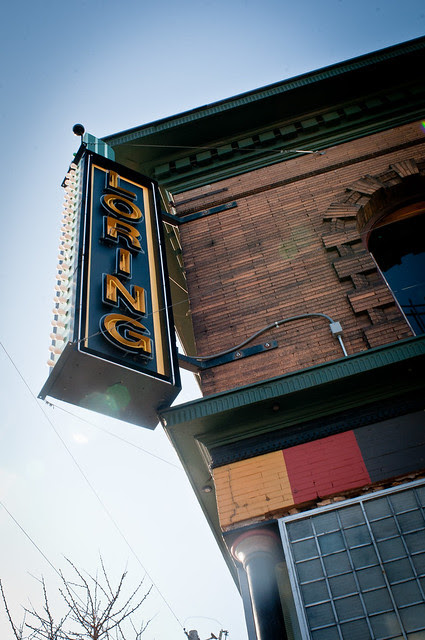 My friends from Cudahy, Jeremy, Krytal and Cal, decided on the Loring Pasta Bar for brunch. 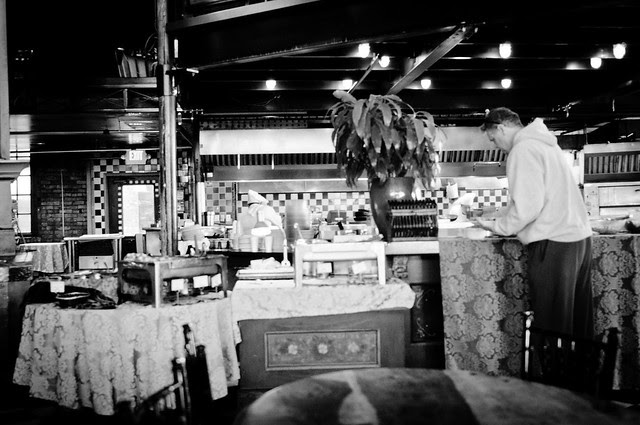 The last time I had met up with these three was Jeremy and Krystal's wedding, which I photographed after a chance reunion last May. Jeremy and I were best friends throughout grade school and only lost touch during our college years. It's been fun seeing these three after all the memories from our childhood. 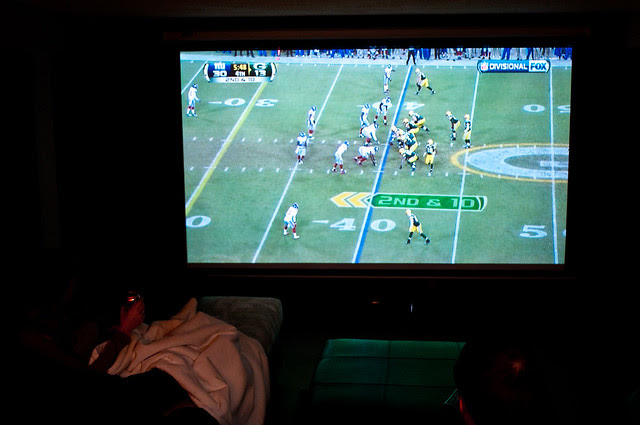 Cal had invited me to watch the game at his new place in south Minneapolis. We watched the gut-wrenching lose on a huge 150 inch projection screen.


For some reason I  didn't take any photos of the four of us. You can almost see Cal's head and Krystal's hand is visible. 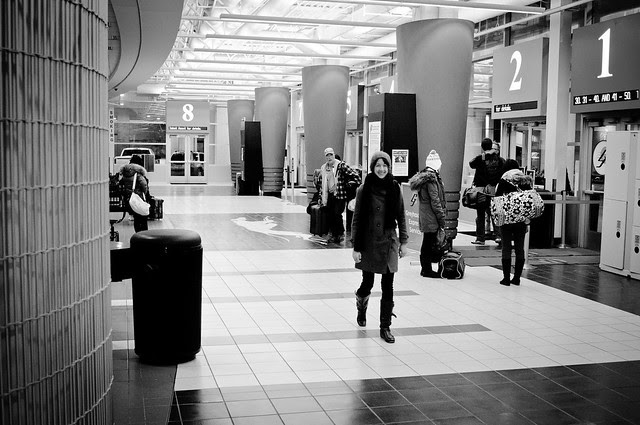 Right after the game I went downtown to pick up Brooke. Only two days apart, but I missed her. 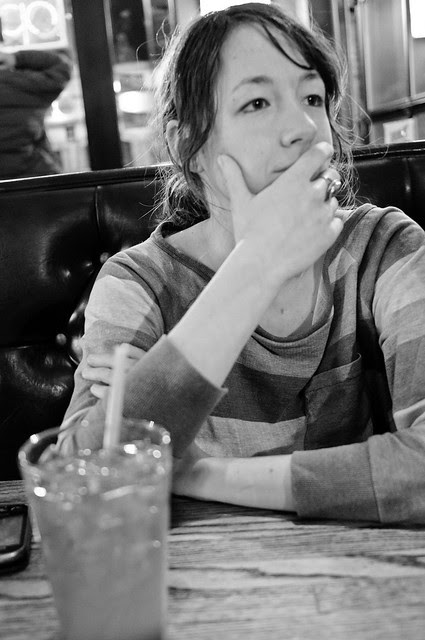 We didn't have any food at home, so we went to Brooke's favorite place, the Bad Waitress. 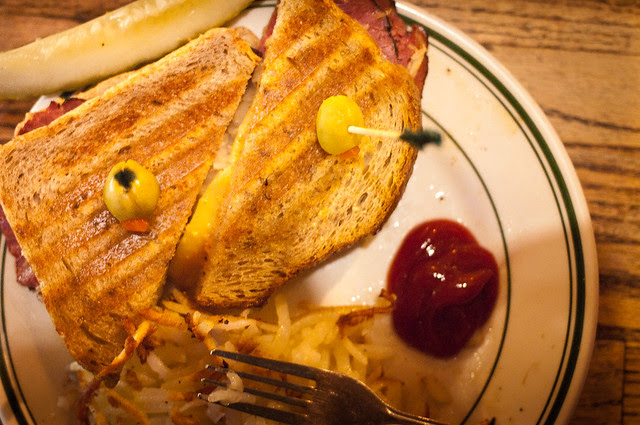 And that's how our night ended.

Amanda said…
How did the bus ride go? Where you a little hesitant to go alone? I of course would have been. :)

Who took the pics of you eating? You are definitely lucky with picking all your own dresses! How fun!

Hey the red screen looks like the one at the Guthrie building!

Brooke said…
Katrina--Thanks for inviting me I had fun too.

Amanda--The bus ride was fine, just really long. It's an 8 hour ride with 1 half hour stop. My butt was very sore from sitting so long. I brought a book to read and slept mostly.

Which picture of us eating are you refering too? The one with all the girls at night was taken by Katrina and the one at the Pie Shop was by her friend Allison.