2 Weddings (the Wedding) and a Scenic Drive Home 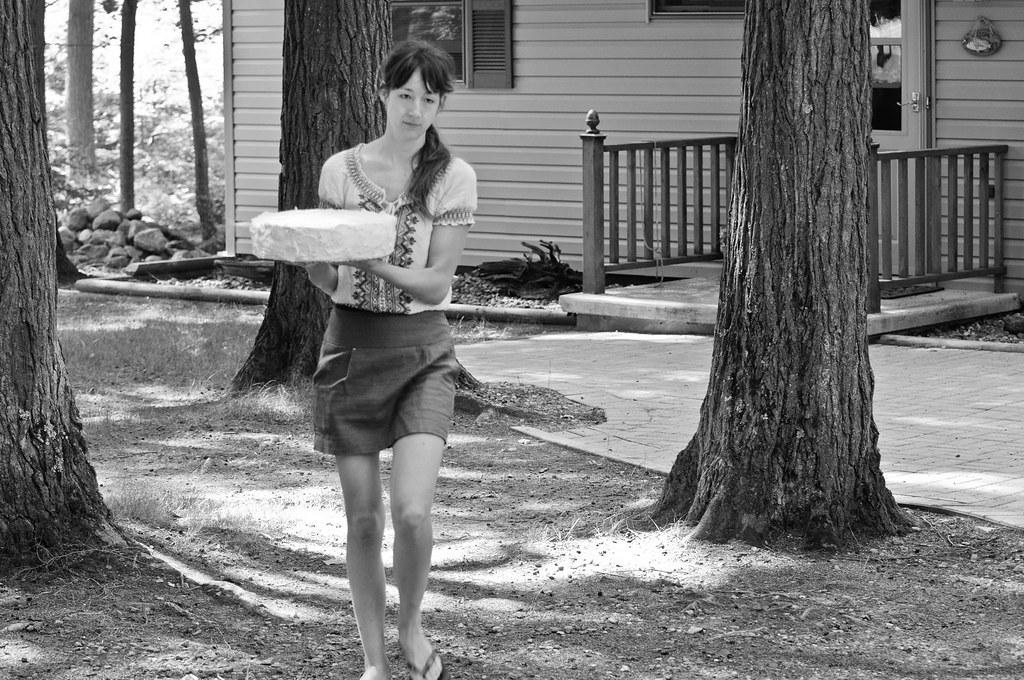 I woke up early and did finishing touches on the cake. 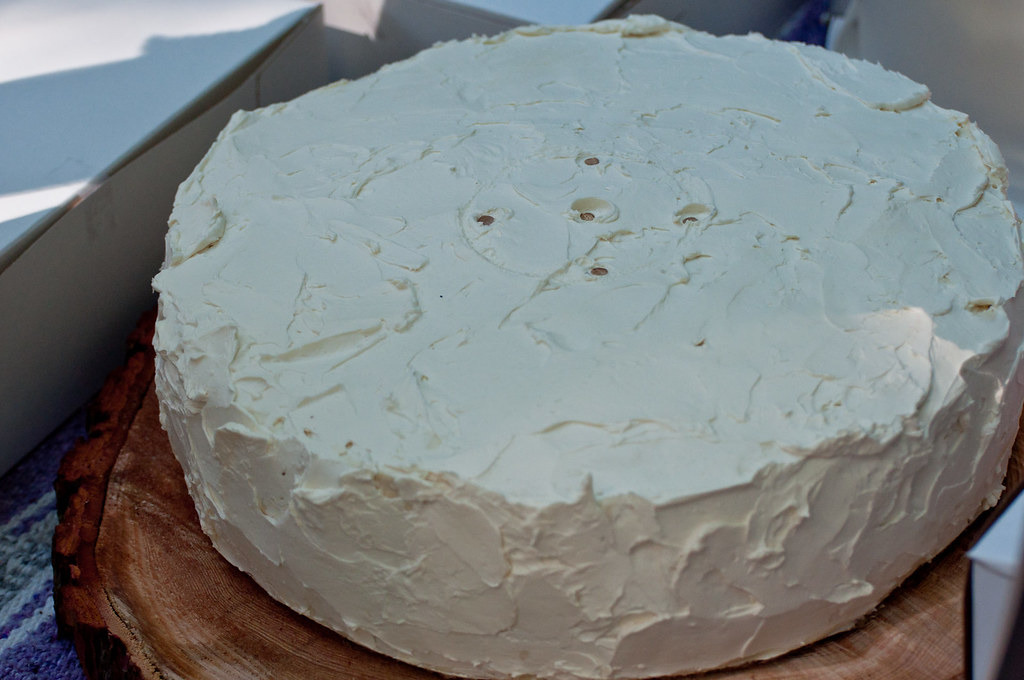 Chelsea and my dad made some of the centerpieces from birch logs. I thought it would be neat if the cake sat on a piece of wood to go along with her northwoods theme. I found a fallen tree off our driveway that was the perfect width and had my dad get out his chainsaw.

Then Scott, Brittany and I went to the reception hall and put it all together.

This was the first time I've ever made a cake where I didn't stress out or make any mistakes. We did have to run to the store a few times to get more eggs. It even turned out better than I imagined.

Yup, everything she said.

After we finished, we headed over to the girls cabin to get ready.

I kind of loved the horrible, but even lighting in this weird cabin for rent.

I compared my ring to Chelsea's.

Brooke' ring was my grandma's. She, oh so sweetly, let me give it to my lady.

Brittany and I were the last ones to get ready.

I watched Jersey Shore with Ken while waiting for my turn.

Ken was way in to the show. At one point he jumped off the couch during a fight between the self-proclaimed Guidos of the shore. I had never seen the show so it was a revelation of sorts. There really isn't anything more entertaining than a steroid-addled Jersey boy.

Scott went with the bride while I was getting my hair done.

My family is so big they had to take a bus to get there.

This was one of the first things we saw after exiting the dust bowl of a road. This is such a Romenesko moment.

The second Chelsea got her dress on, Mrs. Gail came in to the room. A few minutes later all the bridesmaids were in tow.

And then the wedding began.

The weather was perfect for an outdoor wedding.

I'd agree, but I'm more of even lighting kind of photographer. I guess I got some dreamy shots. I think all brides want their weddings to look like this.

I've been editing too many of my photos in black and white. At some point this week I'm going to reedit the greyscale photos. Lots of fun.

Brayden found a frog and decided he'd show everyone.

I loved the colors she picked out for the bouquet.

After quite a bit of searching I finally found a location with soft, even lighting. This series of photos were my favorite.

The only problem is the blinking wedding party. I always take a few photos of each pose, but you always end up with a blinker. 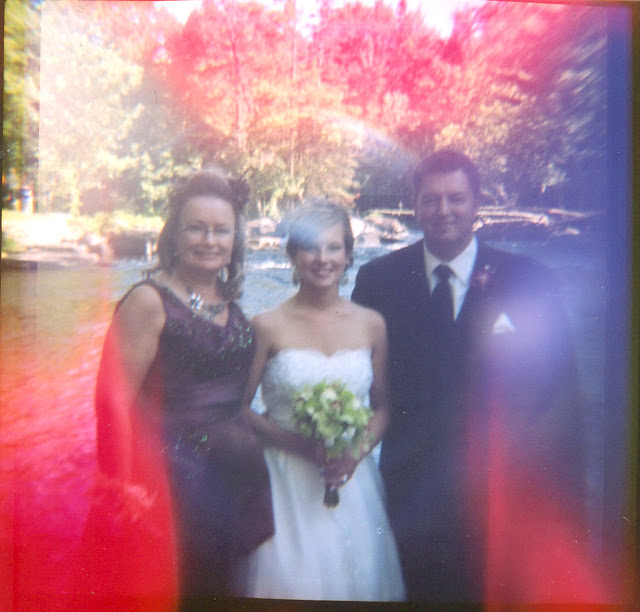 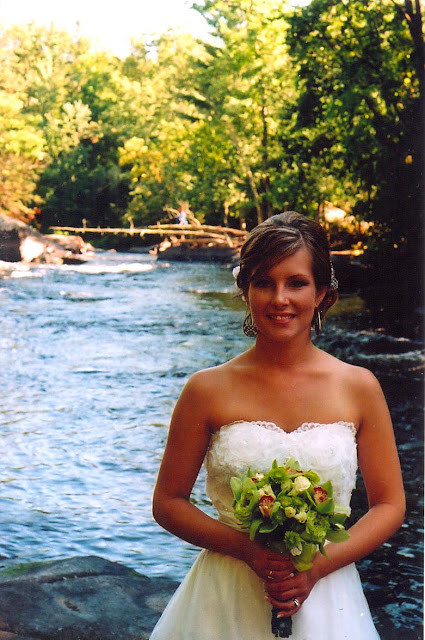 Soon it will be us.

As in we're getting married in 3 weeks. Crazy.

Since we got a picture of Brooke and I, we had to get one of Brittany and Jeff.

Chelsea and Dan hiked through the woods climbing over fallen trees to get to their favorite spot.

This was Brooke's best shot of the day. She didn't take too many photos, but when she's on, she's pretty good. She also gave me quite a few ideas for poses. What a lady!?!? 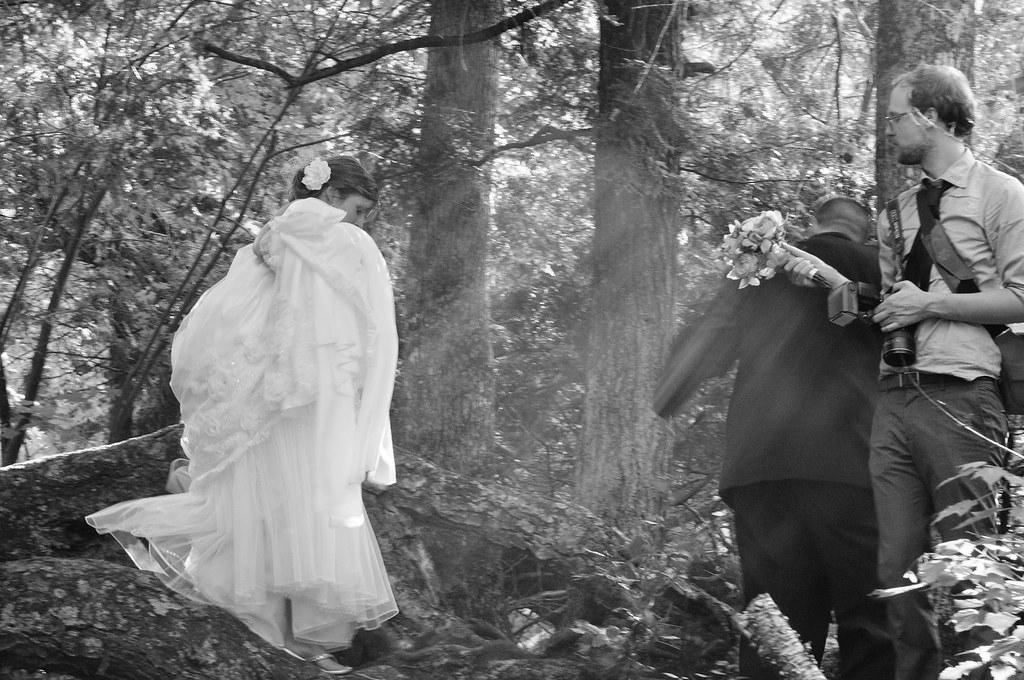 Then it was time to eat.

Check out the lady in the window.

After dinner we went back to town for the reception. Blake and Brooke were very excited.

Before we left I snapped one last shot at Goodman Park.

Brooke and Mr. Mike were ready to get their dance on and eat cake.

When we got to the reception I noticed the cake was starting to tip backwards a little. I still received lots of great comments about it.

I told Chelsea I was nervous about the cake falling over and that they should cut it soon. They had to do their first dance first and then they would do it. Halfway through their dance I turn around and see that it had fallen over. Ashley, the maid of honor, happened to be standing nearby when it happened and caught it. I was more bummed out about it than Chelsea and Dan. We didn't lose any cake just the top two tiers were a little smushed.

When we first arrived I tried to level the cake stand. I think that actually caused it to tip further. If a cakes leaning, just let it be.

Brooke's mom posed with the Romeneskos. This is classic.

The Romeneskos had to get back to Little Chute so they asked if the cake could be cut. Brooke obliged.

But first they had to finish the grand march. It was hunting and fishing themed. Dan's brother put on a show.

We realized there weren't any caterers at the reception so I got the the privilege of cutting and handing out cakes.  I got rave reviews on the red velvet cake. As you can see it went fast.

Because it's red. The chocolate was better, but you just can't change people's habits. Red Velvet just looks so good.

Brooke and Blake posing for a certain Facebook friend.

Scott even got a chance to get out on the dance floor.

Blake was probably the most popular dance partner.

All in all Chelsea did a really awesome job with planning her wedding. She worked really hard and it paid off. I keep asking her to do ours, but she says, "No way, I'm never doing a wedding again." 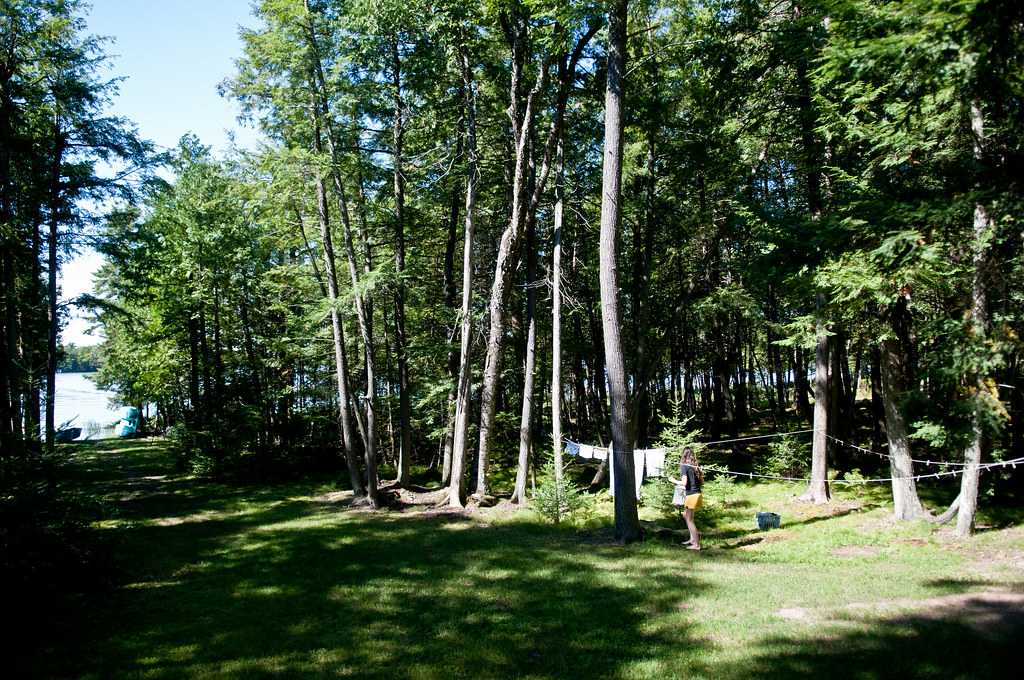 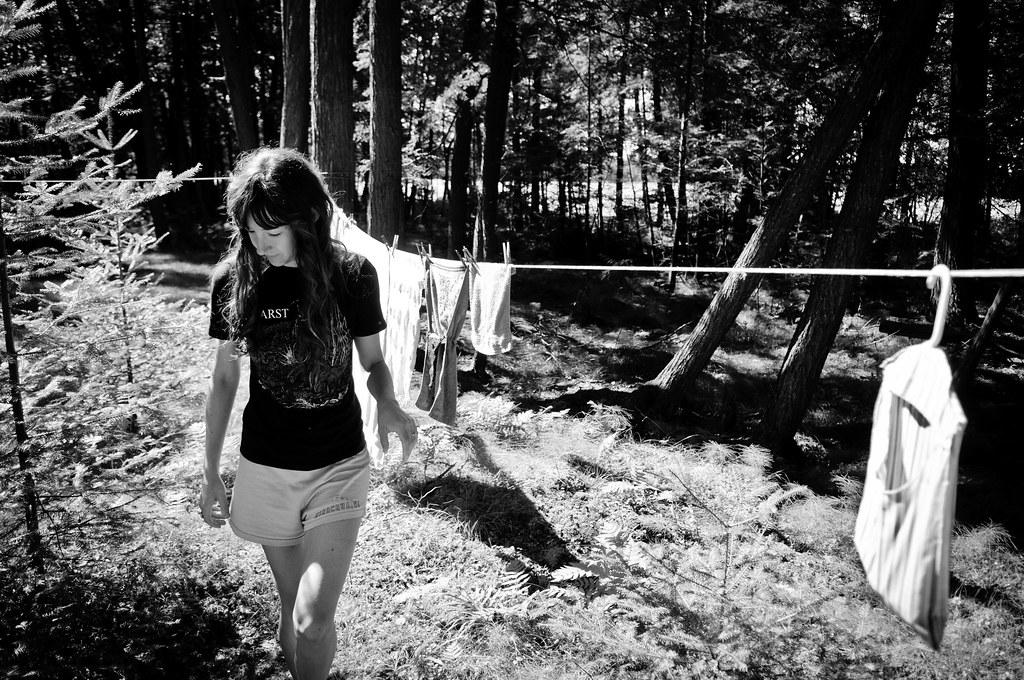 The next morning we had to clean up as it was our last day in Three Lakes. 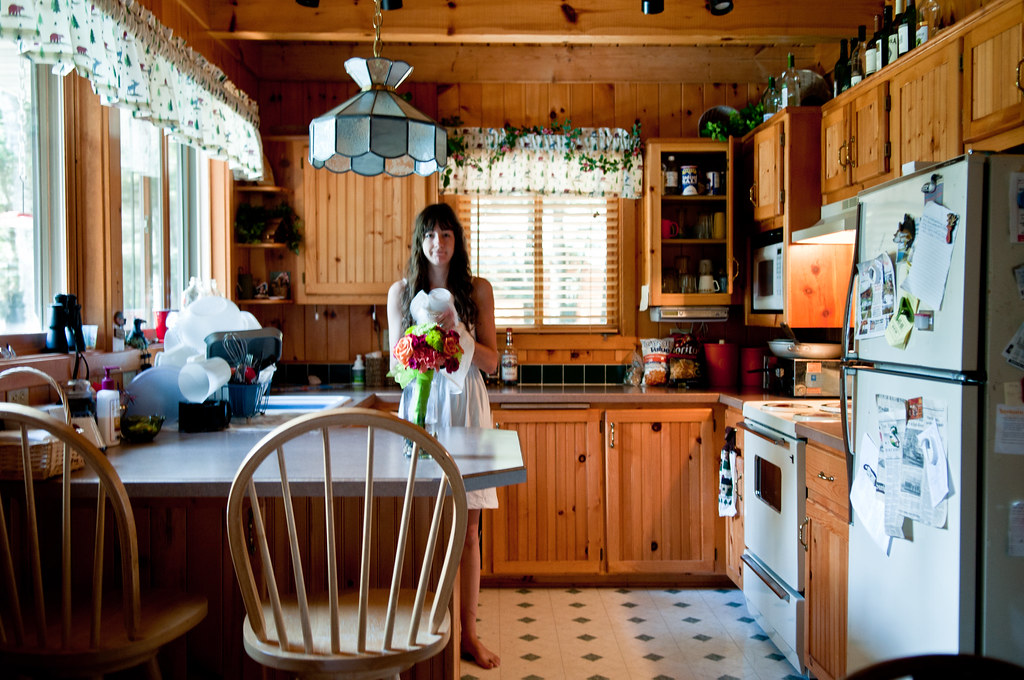 I cleaned the cottage.

Brooke is the queen of cleaning. The place ends up being cleaner than when we arrived. 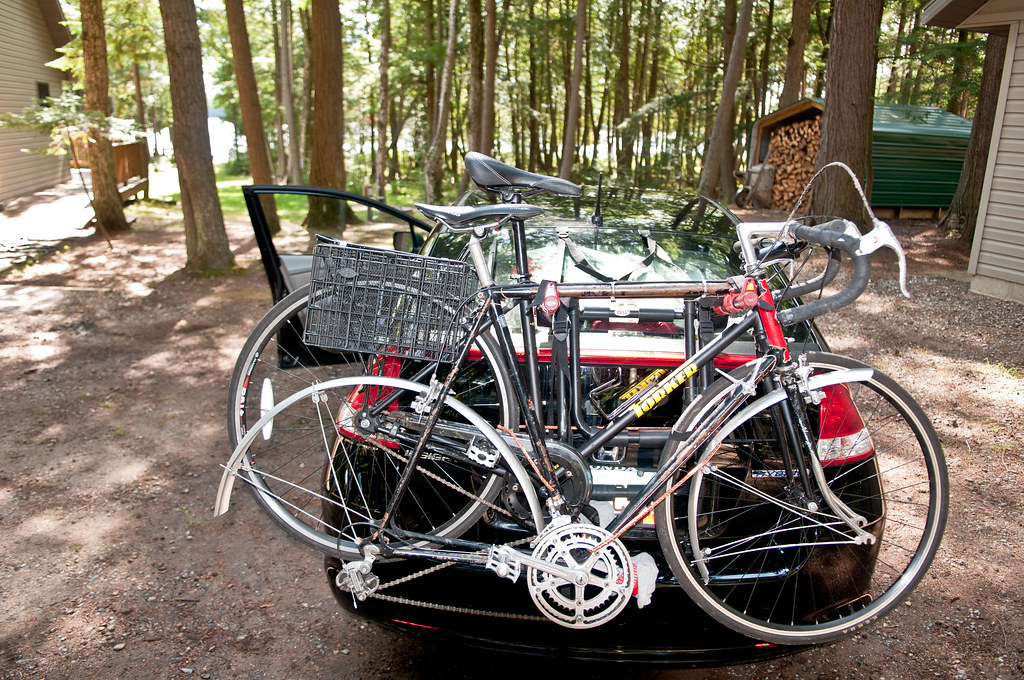 Scott washed the car and packed it up.

Did I ever tell you I hate our bike rack? We really need a new one that can actually fit two bikes. 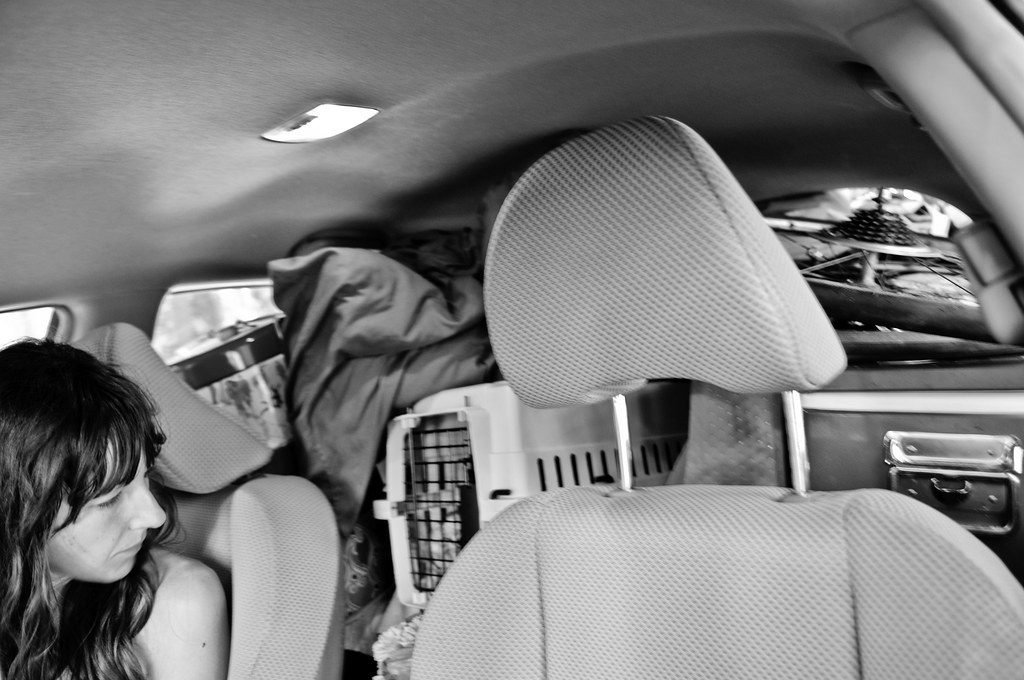 Somehow whenever we go to Wisconsin we end up coming back with more stuff then when we came. 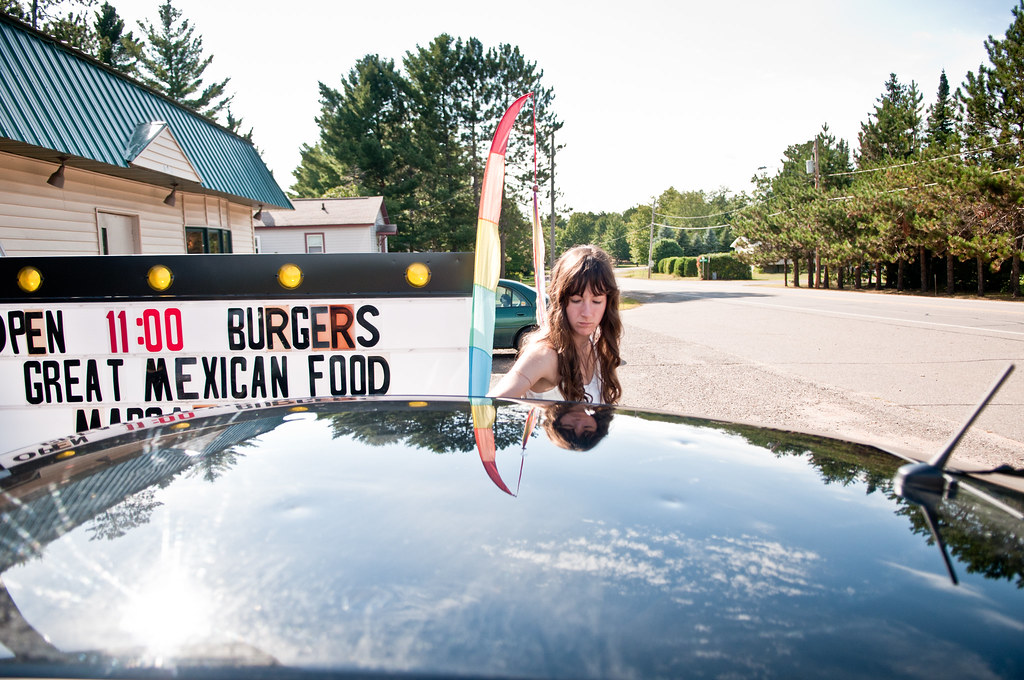 We were sick of taking the same route back everytime so we decided to pull out the old paper map and take only county roads home. We decided to stop to eat wherever looked good. Driving through Tomahawk we spotted Freddy's, a Mexican restaurant/bar. 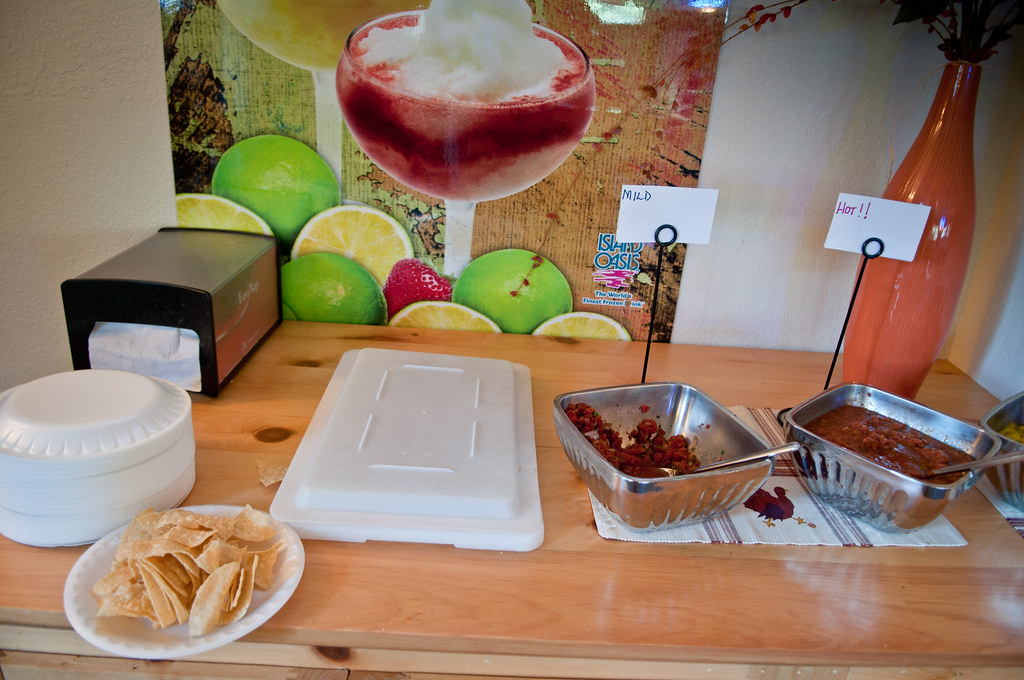 This place was awesome because they had an all you can eat salsa bar. I hate when places don't give you a refill on chips. 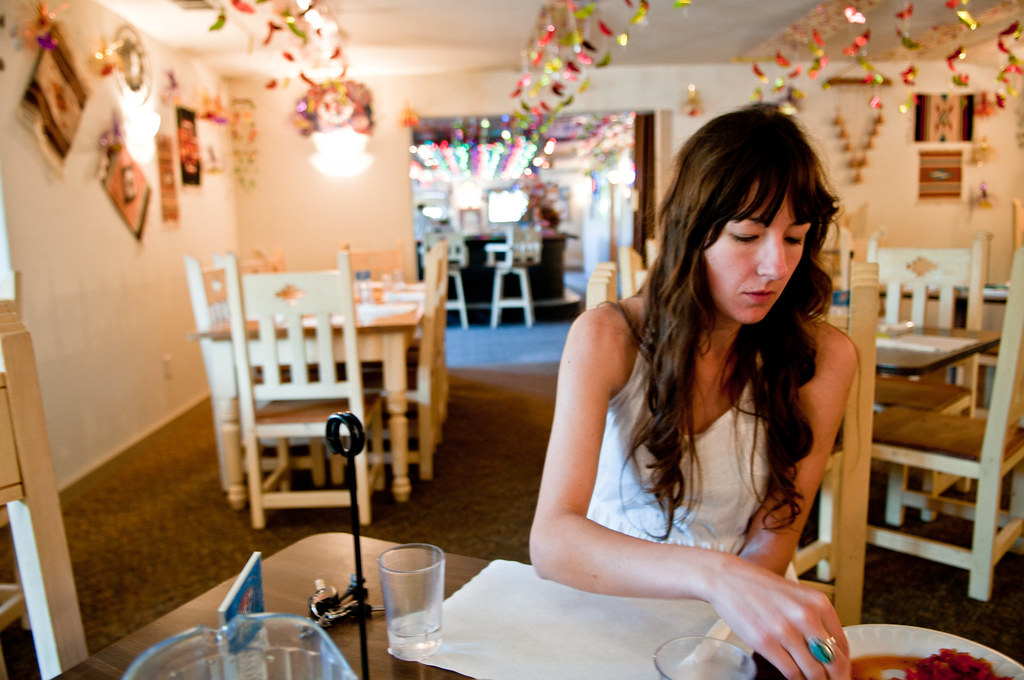 One of the salsas was super spicy. Brooke made me eat it all. It was a chore.

Note the awesome chili decorations and Christmas lights over the bar. 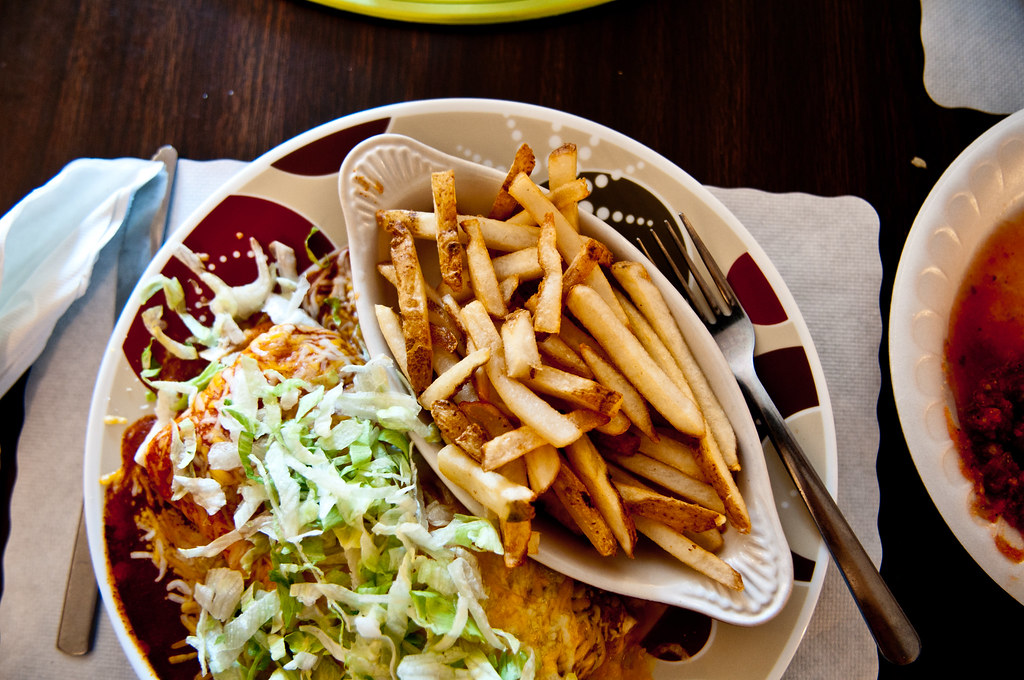 Scott ordered fries with his burrito; what a goof ball?

This meal reminded me of Colorado, except this burrito was better. Brooke ordered boring tacos. So, who's the weirdo? 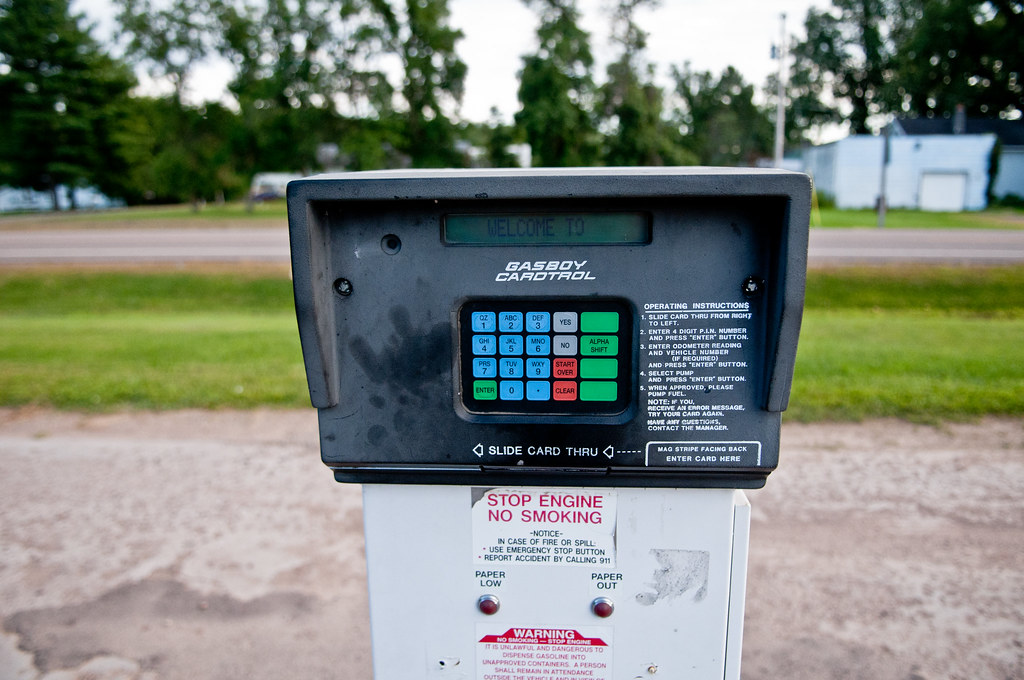 We needed gas and every town we drove through had a population of less than 500. We stopped at one place that didn't have a building, just pumps. Scott figured out how to use the dinosaur of a machine while I went to the bathroom in a nearby park. The port-a-pottys there, I swear,were sitting there since the 60's.

This machine was just confusing. 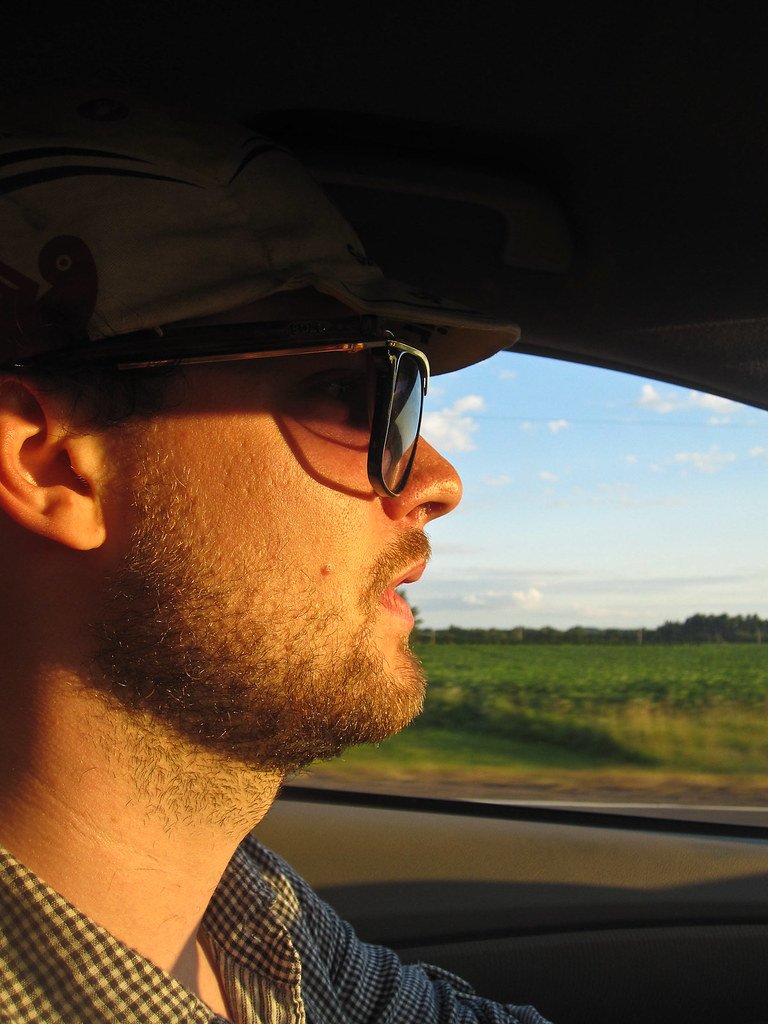 I decided to put on Brooke's sun glasses over my glasses for long enough to take this picture. 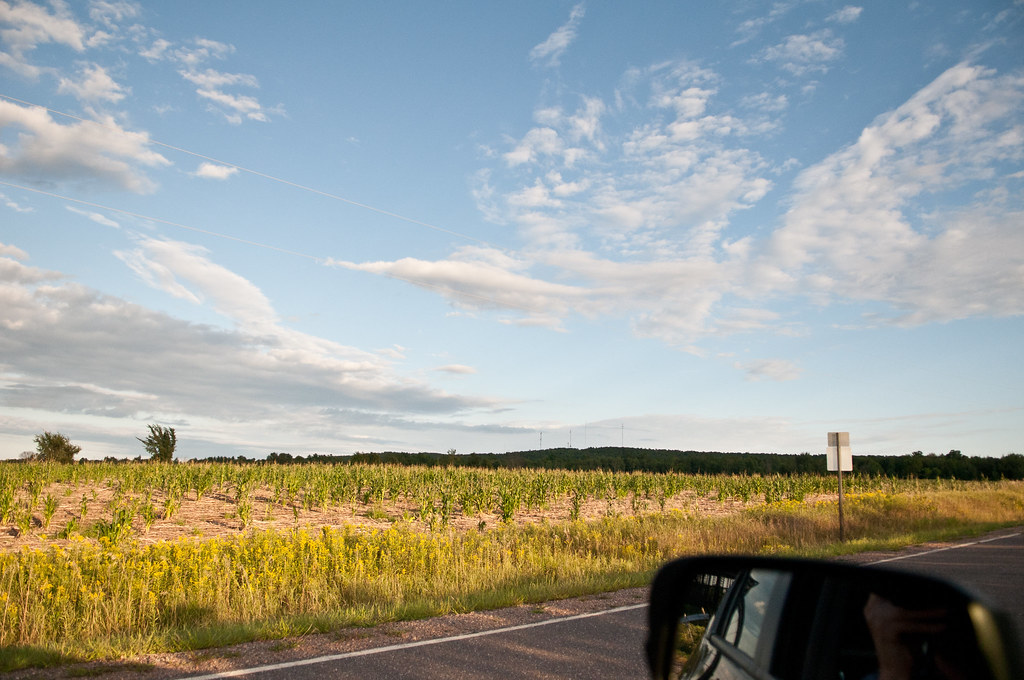 It took us probably an hour longer to get home, but at least the ride was more enjoyable.

Vacation was over. Summer was over. All in all, it was a good week: two weddings and way too many blog posts.

Blake Romenesko said…
The pictures are fantastic! Especially how every picture mom is in is hilarious.
3:50 PM, September 21, 2011

Amanda said…
The cake looked BEAUTIFUL!!! Nicely done! I love how you did the tiers and it all turned out so good! Congrats! Are you making one for your own wedding?

I agree that the colors Chelsea picked are really nice. You hair looked beautiful for the wedding!

I enjoyed the pictures, Chelsea looks beautiful like usual!  I laughed hard Scott at the picture where you said “I do exist”.
Scott when you said ‘What a lady?” did you mean to put an exclamation mark? If not, and you’re asking the question then YES I think Brooke is a great lady.

Seeing the picture of Scott dancing brought back memories of my wedding!
The cottage looked so cute!!!
Interesting gas machine…surprised you figured it out!

Rock Paper Stitch said…
The pictures look awesome! The shot of Chelsea and Dan at the altar looks so good with the tree behind them. It really draws your eyes towards them.
9:12 PM, September 26, 2011