2 Weddings and a Very Long Drive

The next morning Scott had to leave bright and early to head back to the Cities for work. I asked Blake to come up so I didn't have stay here alone.

I had to leave before eight o'clock to make it back to the Twin Cities on time for work. I had pleaded and pleaded to get off for PI (product inventory for those not accustomed to the world of Best Buy). I didn't get off that one day, but at least they let me off the rest of Brooke's vacation.

All I had time to eat was some gas station Wisconsin cheese and sausage (I was trying to keep things local). I also had a Rockstar energy drink. Let's just say I didn't feel like a rockstar later that night.

I was hungover or in dire need of more sleep, but I made it back on time. The 240 mile drive was a blur. Unfortunately I wasn't able to eat or drink anything of substance before work.

Kitty got a new phone.

I went hiking with my parents and Blake in the Nicolet National Forest. We went to an area that used to be for downhill skiing. I only brought my film camera and haven't developed those photos yet.

I even left my Nikon for Brooke. Shame, shame.

*update* I got those photos developed. 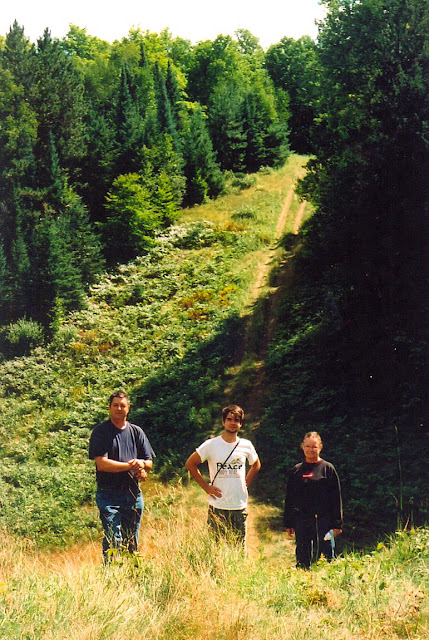 Behind them is the biggest ski hill. It doesn't seem that big in the photo, but it is very steep and far to climb up it. 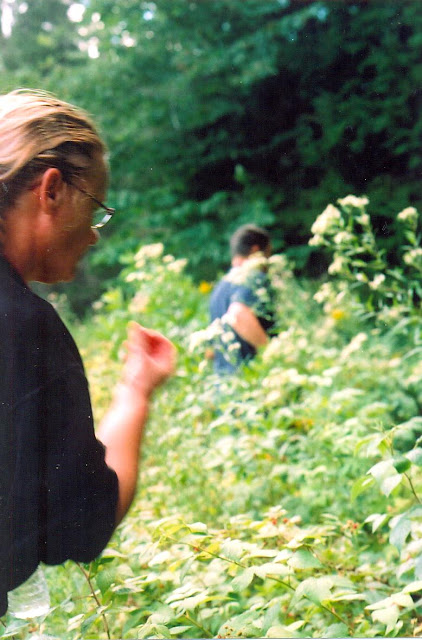 There were wild raspberry bushes everywhere. 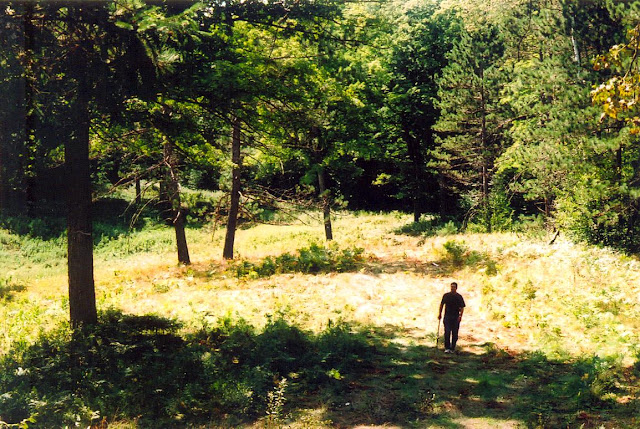 We tried to figure out where the ski lodge might have been, but didn't have any luck.

We then ate some cheese.

My parents went back home and we made dinner. We had Boca chicken burgers and corn on the cob. As kids we used to eat only corn for dinner. We each would have about 6 pieces each. I never thought this was weird until I met Scott.

She can totally eat a dozen. I always have to laugh when I see her family eat corn. They annihilate the cobs.

Apparently Blake tried out my new lens on his manual focus Nikon. It causes an awesome tunnel vision/vignetting effect on 35mm film cameras.

My mom left rice krispies to make treats with. I can't remember the last time I made these. We also finished these off in one day.

Blake had to go down to Milwaukee, but Scott had taken his car back to Minneapolis. We played board games until Scott returned.

Somewhere in here I picked up our invites after having quite the strange night. I'll just say this: always get enough sleep and stay hydrated. You don't want to get dizzy from a lack of sleep at the end of a shift at a big box store.

Thankfully I felt fine in the morning and made my way back. That's 750 or so miles driven in five days.

Scott took a quick nap and then we went to town to run some errands.

We biked along the road and then the highway. I'm not a fan of biking next to speeding trucks.

When we got to town we pumped up our tires. The ride into town was a struggle and the lack of air pressure was the culprit.

I don't know what is up with this sculpture, but it caught my eye.

We walked around downtown first and then went to the Post Office to get a whole bunch of stamps for our invites.

We stopped at Lick-A-Dee Splitz. I knew about this place, but never went inside. Turns out they have more flavors of homemade fudge than Tremblay's.

We got ice cream of course. 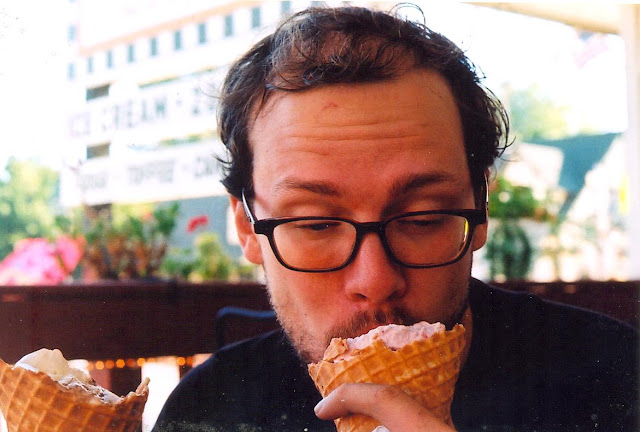 Though their fudge and candies are all homemade the ice cream is just Kemp's or something like that. They did have a very large variety. Next time, to stay local, we'll get some fudge.

There are a couple self-service corn stands in town. You get to pick what you want and put the cash down a pipe. We got half a dozen, because you already know about my love for corn on the cob. 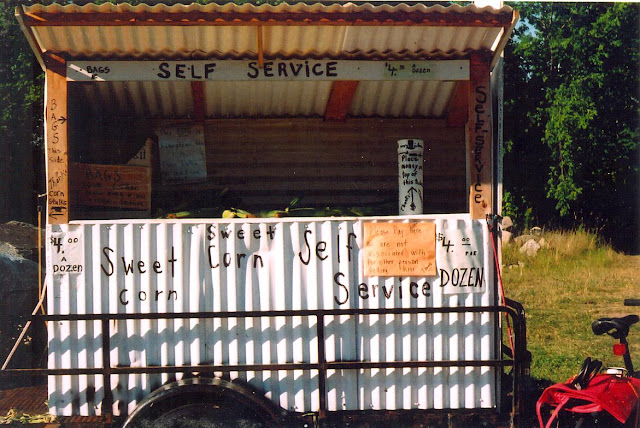 We made one last stop at the grocery store.

The only way to get back is by highway. Scott was still nervous about riding next to the fast cars.

Once we made it back to Big Lake Loop I was less nervous. I could actually focus on the beauty of the Northwoods' lake country.

It's sad to see abandoned cabins. Its sadder to see how much this economy is hurting people. I've noticed a lot in the past few years people selling part of their property. Our neighbors are so close now its like living in the suburbs.

Luckily their neighbors hardly ever show up. Brooke's family uses their cabin nearly every weekend in Summer and we make a concerted effort to stop by in winter.

We got to work on our invites. I made the mistake of not printing our address on the rsvp cards. I had to handwrite our name and address about 100 times.

We took a break to eat. We made a rice stew for dinner.

Just carrots, spinach, rice, garlic and water. It was pretty amazing for having just a few ingredients.

It was a nice night so we ate down by the lake.

Then back to work on the invites.

These beauts were made by our very talented friend, Jordan Kay. You should hire her for your design/illustration purposes.

Later on I found kitty drinking from the sink like it was a bubbler.

Blake Romenesko said…
HAHA PEANUT! That cat drinking from the tap is one of the funniest things I have ever seen.

Also, that red cabin has been abandoned for at least a decade. I remember it when I was little when I would hang out with Eddie.
10:04 PM, September 16, 2011