Why We Need a Freezer 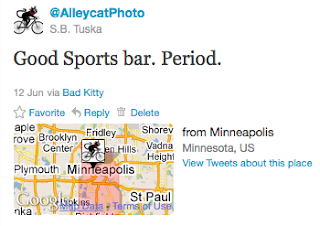 We went out the night before to another party a few weeks back. This time Scott went out to a bar afterwards (I went home) and then decided soon after he got there to walk home. In his drunkenness he forgot to set his alarm and was almost late for work. While he was at work I did some cleaning.

I did make it to work on time. The tweet above is the last of that night, thankfully. West Broadway was desolate at the late hour. Now that I've walked, nee stumbled, the entire North Minneapolis stretch of Broadway at that time, I have no fear of my side of town. 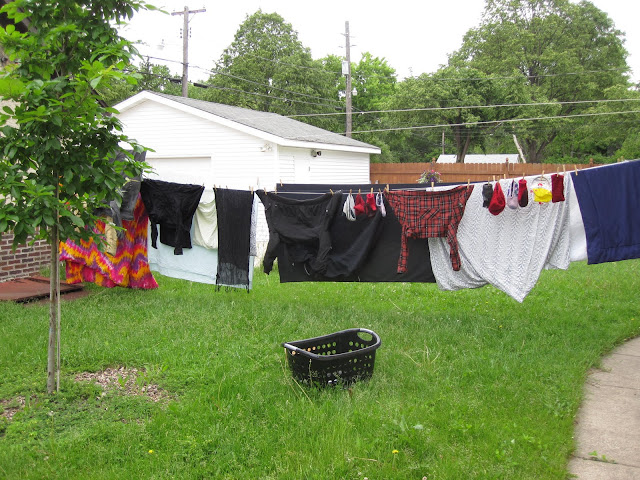 I finally got around to washing all of our winter clothing after Scott went to work. 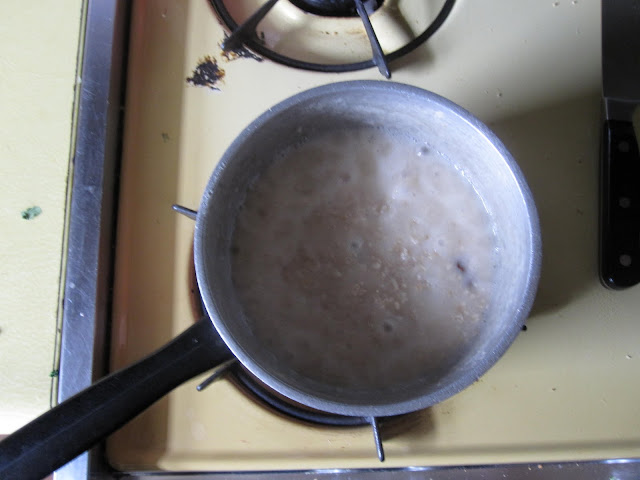 Yup oatmeal again this week. Scott wanted big pancake, but neither of us got up on time. 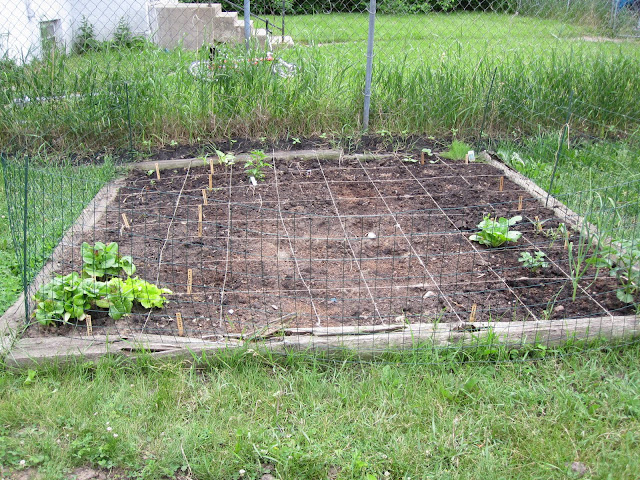 We finished planting our garden this past week too. It will be interesting to see how much it grows each week. I also planted sunflowers all along the edge of the fence. All but 10 squares have something growing in it. 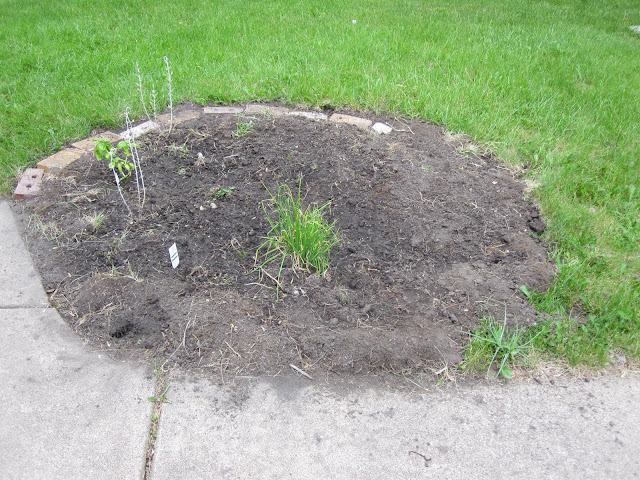 We also put in an herb garden out front. There were a random pile of bricks in our garage attic that we found and used to landscape. We just have to wait for another building to get knocked down to get more.

With all of the damage in our neighborhood from the storm that should be imminent.

Scott came home right as I finished heating up lunch. A tofu and random-vegetables-in-our-fridge stir fry.

I know it doesn't sound all that appetizing, but it was one of my better original stir frys. Next time you whip together an asian keep it minimal: think fish sauce, veggie stock, some ginger and garlic. And don't forget the corn/potato starch. The texture from starch makes a good asian sauce.

A few days back we baked a skillet cookie. It was dry by my standards, so I put a dollop of chocolate syrup on top.

Some of the laundry wasn't dry and we had to get going.  Brooke threw the laundry into what I believe is a 50-year-old dryer.

For the past few years Brooke's been cooking, sometimes cleaning and occasionally babysitting for a family in Edina.

Sadly they had to move away. They told me to come by their place after they had left to take any food that was still there before the movers came the next day. We brought 2 coolers and 5 insulated grocery bags. We thought that would be plenty until we got there and realized how much was actually still there.

What you see in the following photos is the best we're-moving-back-to-Sweden present ever.

They had lots of groceries. Produce, spices, oils...

Even coconut milk or something of that sort.

After I was done with the first fridge and freezer all of our bags were full.

They also had a cellar full of alcohol, Glogg and near-beer. We got to take half of all that in addition to the freezers, fridges and cabinets full of food. It was seriously one of the nicest things someone could do for you.

I like to think of it as a return for all the dinners we've made for people. Hmm karma?

It was sad and weird to see all of their belongings left behind for the movers.

It was more sad for me knowing that I will never be in this house again. I was still new to cooking when I first started with them. With all the strange meals I've made for them it's helped me become more confident. They've also introduced me to new foods and helped change the way I eat. I'm going to miss them dearly and hopefully I will see them again at some point in my life.

On the way back home from Edina we stopped by the Theodore Wirth Picnic Pavillion. Despite the unkempt grass, the venue was very "us" and has a great view of Wirth Lake. It's not quite as nice as Theo Wirth Chalet, but we don't have to have a police officer and can choose any caterer.

And bring our own beer.

The lake down the hill from the pavilion is being renovated (can you renovate a lake?). The tornado tore to pieces the floating walking path around the swimming area. Thankfully most of the new equipment on the beach is intact. The rest of it is still floating on the other side of the lake.

When we were driving down Golden Valley Road we saw this guy walking his snake. I would have stopped for a better pic, but we were on a mission to get defrosting meat into a freezer ASAP. 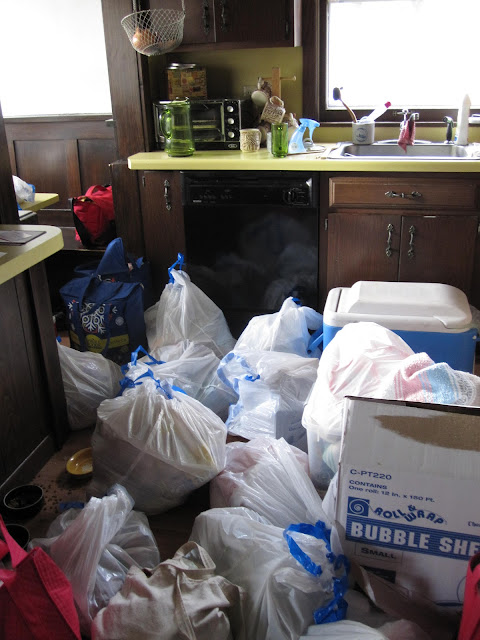 Umm, yeah, not sure where we are going to put all this.

Brooke and I spent the rest of the night sorting the groceries we had just went "shopping" for. Every few minutes I'd open up some strange snack food. Parmesan Kale Chips had to be weirdest. They tasted nothing like our kale chips.

Pirate Booty was my favorite

Our freezer quickly filled up. We had to take about two garbage bags full of frozen millet bread and other goodies to our neighbors home. We either needed a basement freezer or a massive fridge.

I neatly tucked away the 20 or so bottles of wine and liquor. Hennessy, anyone?

Only later did we notice what we thought was imported beer we had never heard of was actually non-alcoholic.

In the winter instead of composting we saved all our vegetable scraps to make stock with. Since we needed freezer space we finally got around to doing so.

The next morning I got up way too close to my shift at Geek Squad. I just had enough time to get the chicken stock strained and Tupperware(d). I really need to get up earlier for work.

Turkey Chili was something I made for the kids frequently. They also loved kycklingsoppa and tacos.

You really can't get more meta than eating your clients frozen food that you cooked.

After a long day at work and a strange evening with Brooke, I (I'm pretty sure that's my handwriting) wrote this note to remind me to call the wedding venue. In the midst of my chicken stock-freakout Monday morning, I made it official. We're getting hitched Friday, October 14 in North Minneapolis' Wirth Park. We'll probably have some groceries left over. Hell, we can drink the Champagne.