By Brooke March 27, 2011
Amanda asked: Where do you guys get your ideas for groceries?
Well we love cookbooks and all things food related. We subscribe to Bon Appetit and get lots of ideas from there. Whenever I'm at the library I usually pick out cookbooks there. If it's a book we really like we end up buying it. 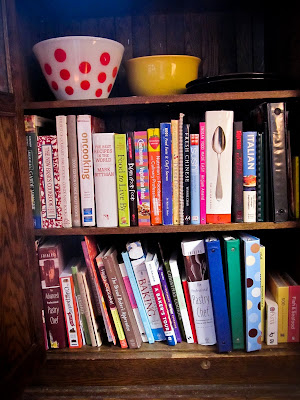 Scott was feeling productive right as he got up and reorganized our cookbooks.

I'm hoping this will stay this way for at least a week. You notice the meticulous organization by cuisine...well, I still have to organize the baking shelf a bit better. 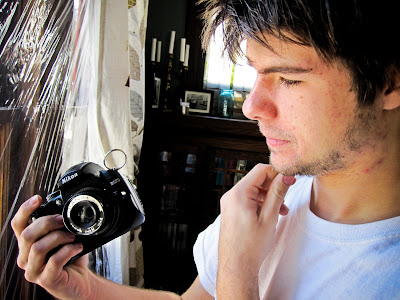 My little bro is visiting during his spring break.

Blake decided it would be cool to put the Diana lens on his SLR (or maybe it was Brooke's idea). 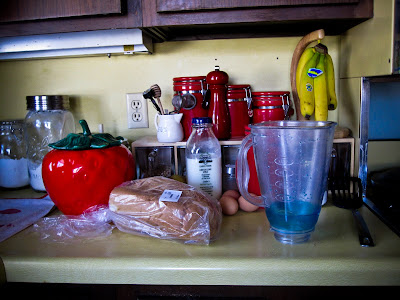 Scott gathers the ingredients for breakfast. 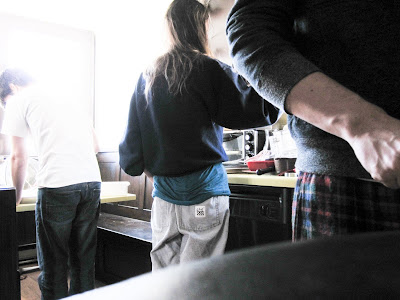 The three of us cook together. It's nice having an extra helper.

While I was toasting the french toast Blake attempted to dislodge a stuck knife. It took a while, but we did get it out.

The results were these magnificent apple-stuffed French toast. We usually buy our real maple syrup in bulk. For some reason last time we put the syrup in an old strained tomatoes bottle. Weird. 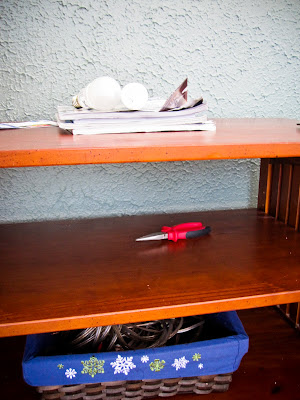 Scott couldn't find his needlenose pliers. As he was talking about them he looked down and saw where they were. 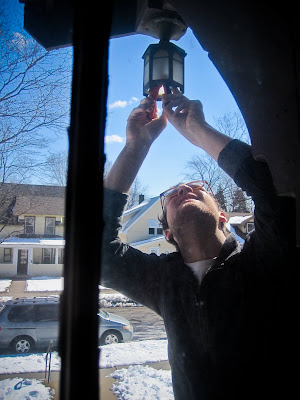 In an attempt to change a light bulb, the bulb broke. Scott tries taking out the remains. 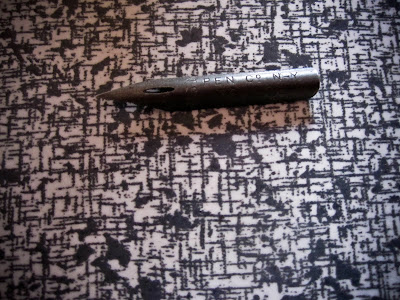 Blake found an old pen tip in between the wood in our archway. I always wonder what the people who first lived her were like. How did they arrange their furniture? What kind clothes did they wear? How many Christmas dinners were made in our kitchen? We are lucky to be only the third owners of our house. 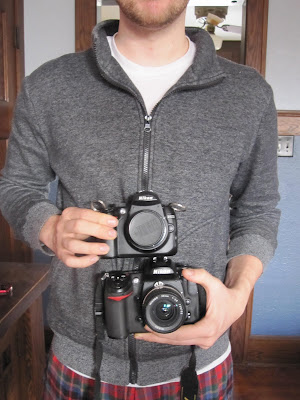 Scott compares his camera to Blake's. Mine's the big one. 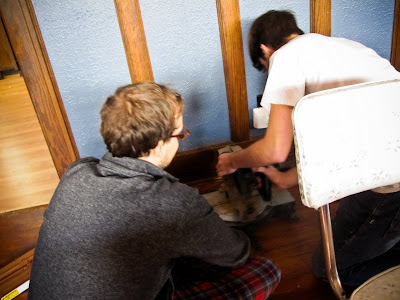 My dad gave us one of his old saws, which we need to cut blinds we just bought. 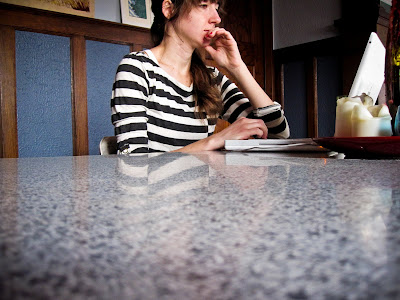 The boys went to Menards leaving me alone. 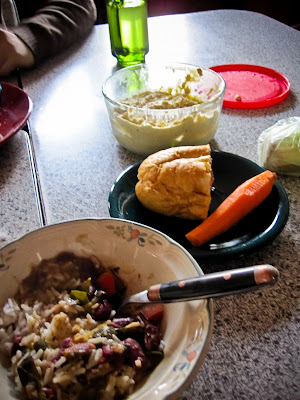 When they came back we had lunch. Red Bean and Collard Gumbo, Mock duck banh mi's, and hummus. 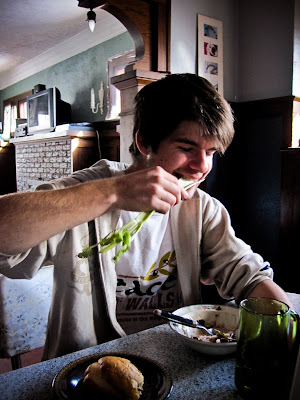 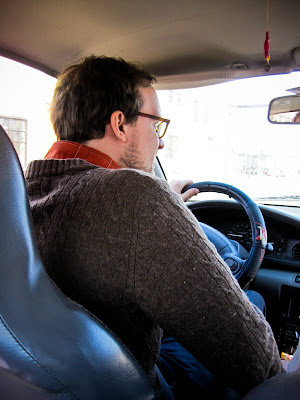 We were bored and decided to take a road trip to Burnsville.

This was my first time ever actually stopping in this southern Twincy suburb; Brooke gets to the exurbs more than me. The city didn't seem too exciting, but we did find what we were looking for. 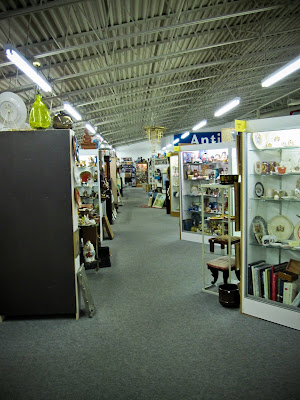 We stopped at Antiques Minnesota. It was huge. 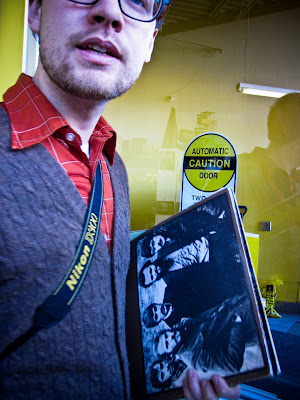 Scott got some great deals on records.

For nine bucks I picked up The Band's eponymous album, Paul McCartney's Ram and Tears for Fears Songs from the Big Chair. 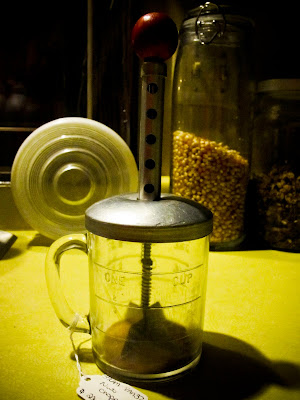 We had this awesome green measuring cup that broke when a pile of dirty dishes fell on it. We found a replacement that is also a nut chopper. Bonus! 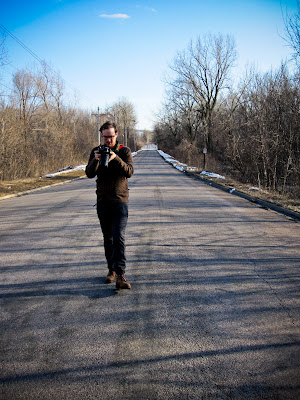 We then decided to go for a walk.

Brooke posed for her beauty shot. 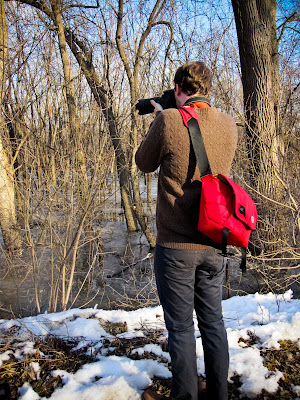 There's lots of flooding with the melting snow and spring rains. But then again the Minnesota River always seems to be flooding. 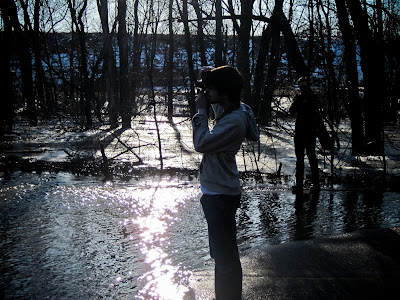 We go home and make sushi.

Meanwhile we listen to our new records. I really like McCartney's Ram. What a steal for $3. The previous day Blake and I went to Shugga Records and I asked about used copies of King Crimson's In the Court off... and Red. They wanted $60 for a mint copy. I'd rather find it an antique shop for a few bucks. Nevertheless, it's a great record store if you're a vinyl junkie like me. 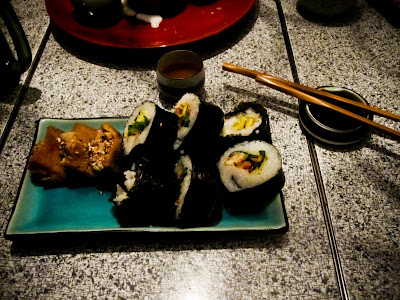 The sushi turned out pretty great. I'm really happy I got Brooke the sushi plates and cookbook for her bday. We're going to put them to good use. I'm looking forward to some seafood sushi soon.

Amanda said…
You guys do such unique things. I was excited to wake up this morning and see the new blog post. Not only that, you gave your blog a whole new look! Very nice. And I was thrilled to see that I made your blog!! Yay! I can't wait to visit you two and learn a thing or two about cooking. I would like to request the apple french toast meal...that looked DELICIOUS!! Looking forward to the next post. . .
8:55 AM, April 02, 2011