Honeymoon But With Kids: Back to Tahq Falls 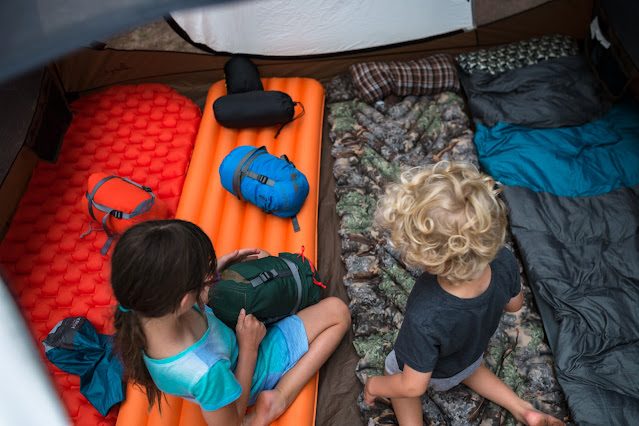 After a few days we started to have a daily routine. Meadow would set up our beds while I hung up all our always damp clothing and Scott would cook. 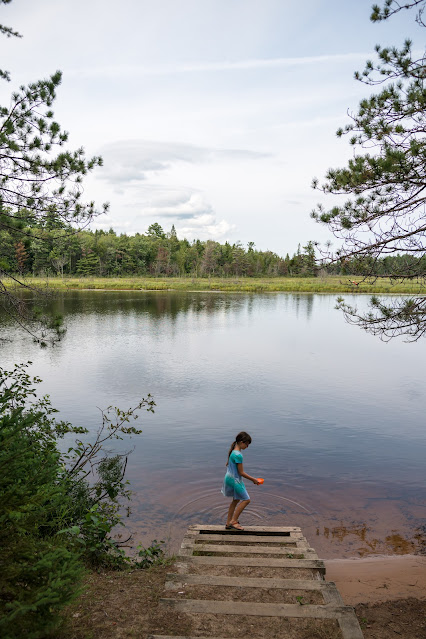 Today was the breaking point of our trip when Scott questioned if we made this trip too long.
My response was to the children's behavior the entire day. The drive down from Canada was full of whining. And then Theo suddenly had to pee on the bridge from Canada to the US, which upped the stress. There always has to be a bad day on a long road trip. It's inevitable.
Theo had been super grumpy since he woke up, the kids kept fighting and everyone complained. 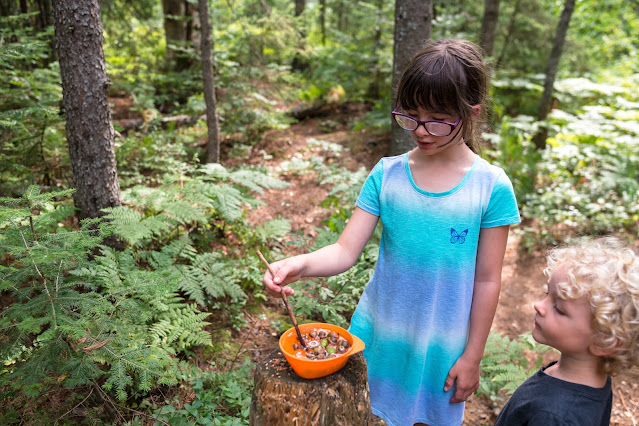 After we all took a break and the kids made acorn soup. We were ready to adventure again. 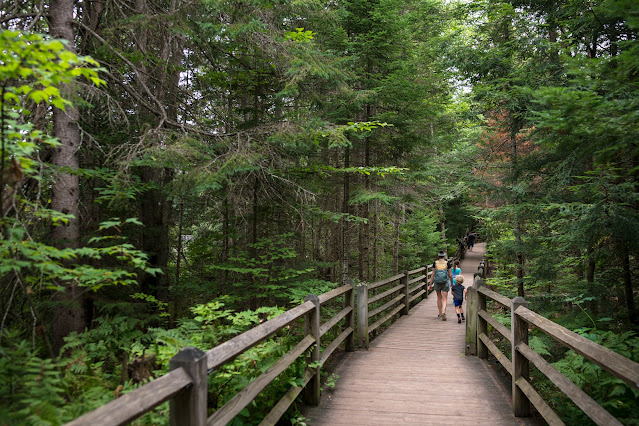 Unlike last time we were going to drive to see the two waterfalls, not hike it. 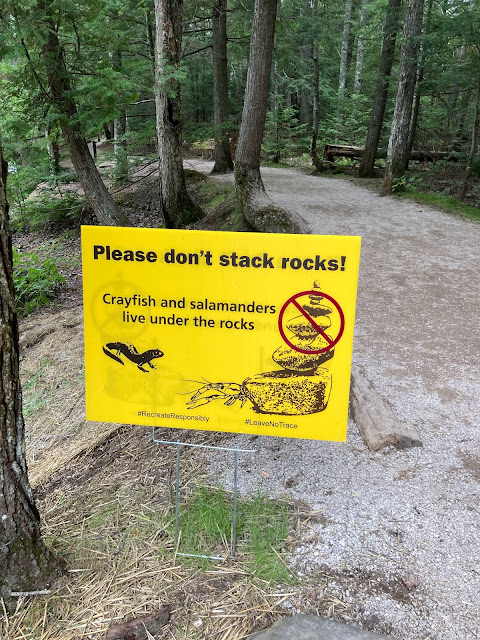 Yaas!
Finally someone told the nincompoops to knock it off. 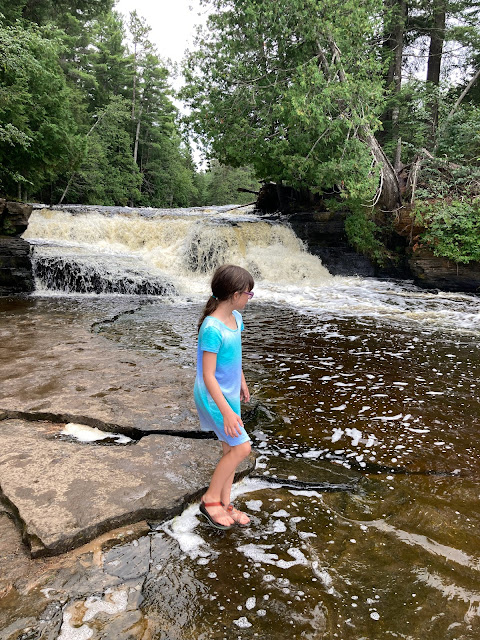 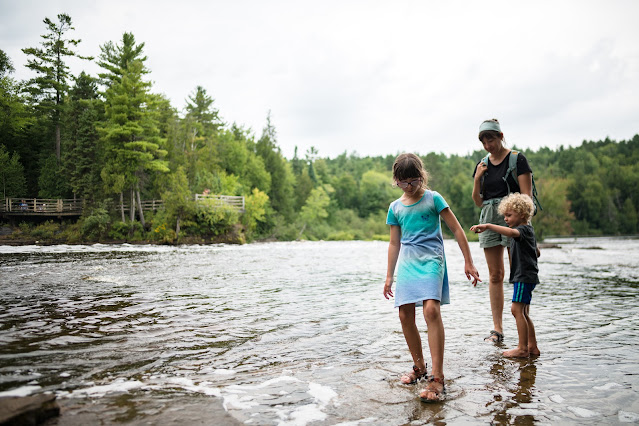 On our walk to the lower falls we kept seeing people coming back in swimsuits. I guess it's a thing to swim here. 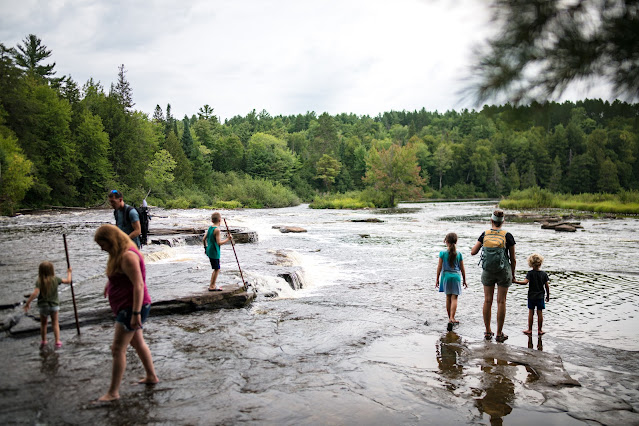 It doesn't look safe to this worry wort over here, but I let them have fun in the water. 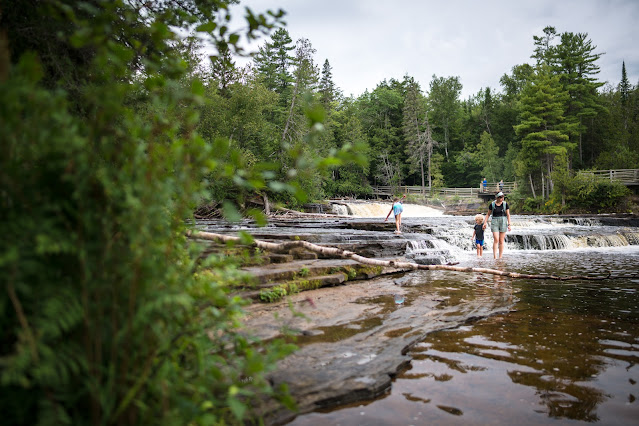 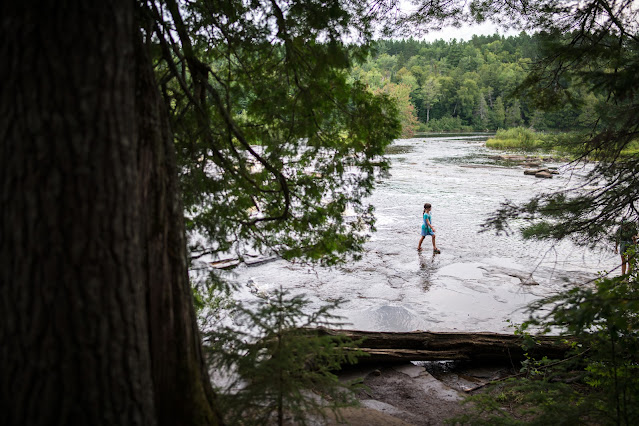 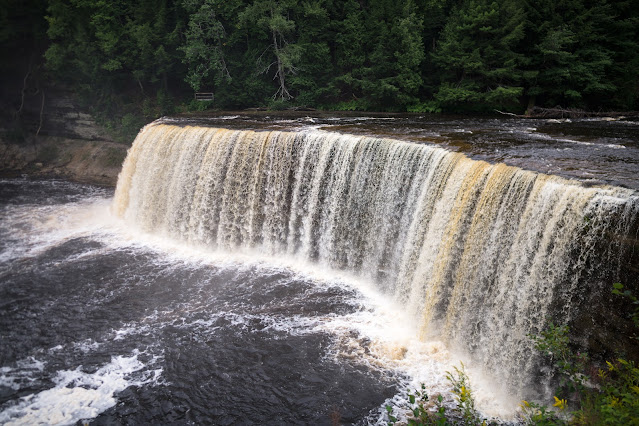 After playing for a bit we headed over to the Upper Falls. Not sure if it was the mood of the day or the cloudy skies but we were just not impressed. 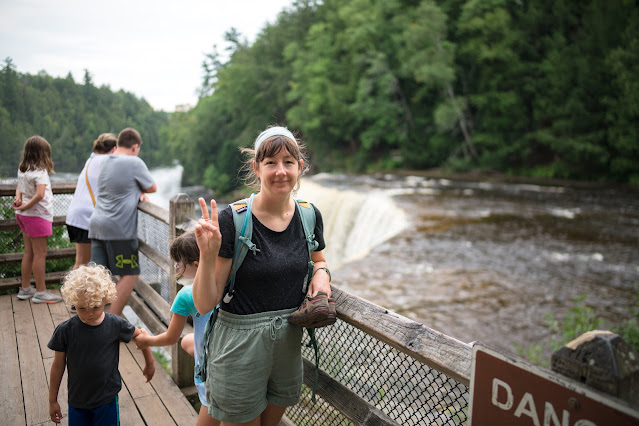 Is Lower Falls actually the better one or have we seen too many good waterfalls? I think we're becoming jaded. 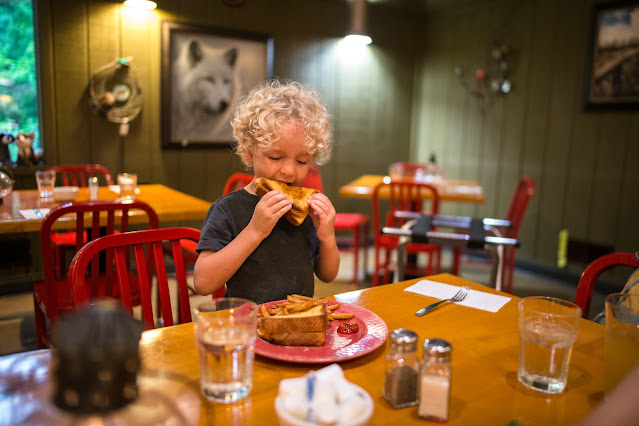 I was so excited to then have dinner at the Tahq Falls Brewery. I remembered this being great but that was probably because our 4 mile hike felt like forever. We both thought it was meh.
The beers decent but the food, other than the grilled cheese, was very mediocre. 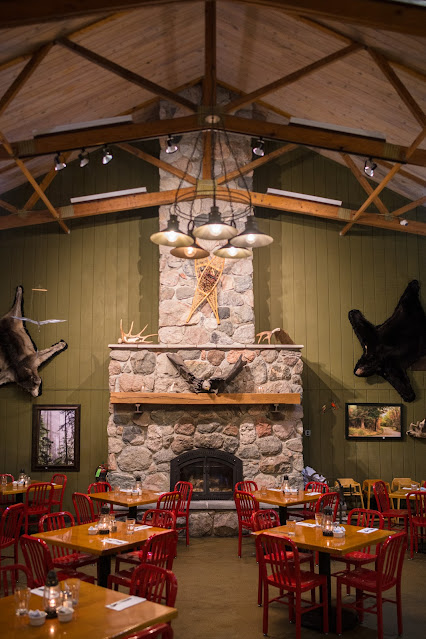 Cute place but I think when we do this trip again in 10 years we'll skip the falls. 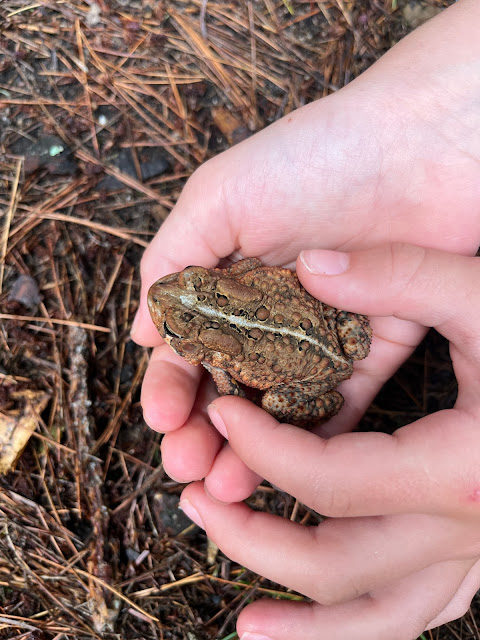 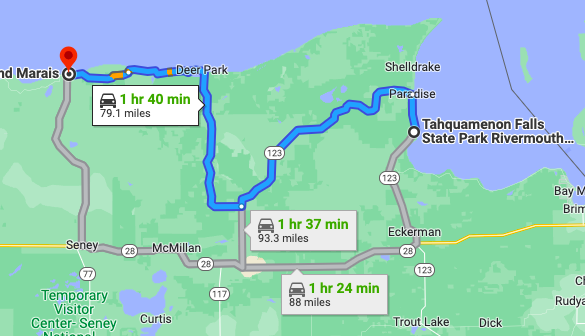 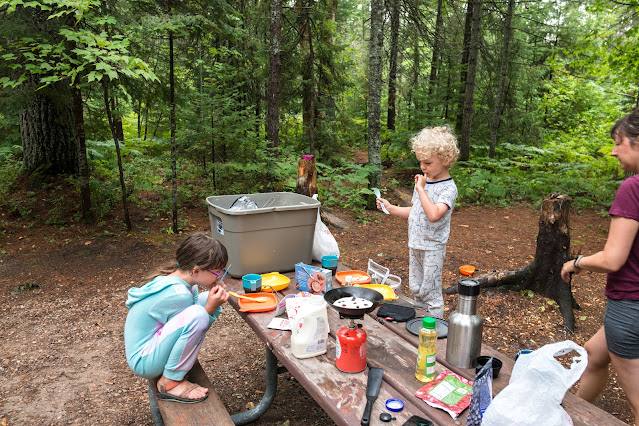 After a night of hard rain we all woke up in better spirits. 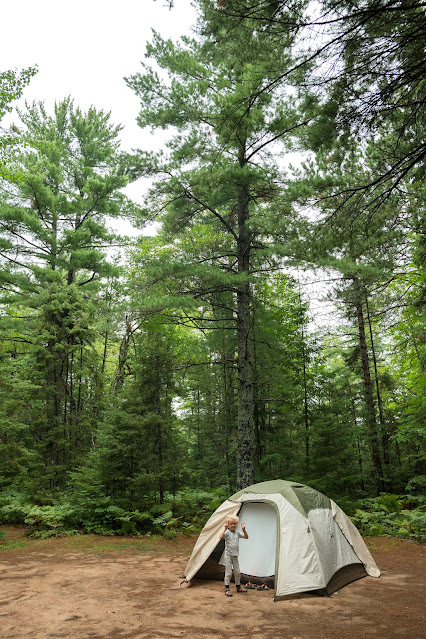 The campsite here at the Rivermouth Campground was probably the best one we had on the trip. It was a large site and tucked in the corner away from everyone else.
While the falls were less thrilling this time around, Tahq Falls State Park is massive. Would be great for some backcountry hiking between Rivermouth and the falls. 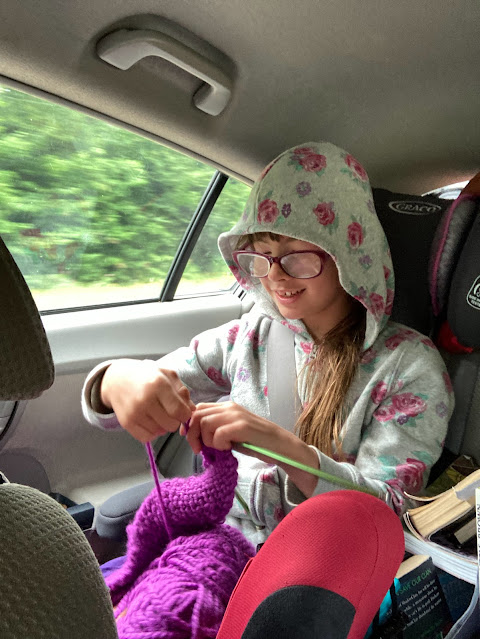 The kids were still doing great with having no screens on this trip. Meadow became a knitting machine. 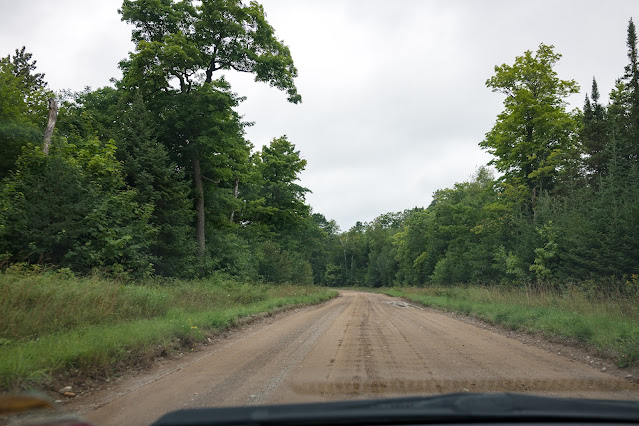 We took the "scenic" drive to Pictured Rocks, which after making this mistake before, forgot that it's basically an ATV route and not the smoothest ride.
Repeat, do not go on the northern road along Lake Superior between Tahq Falls and Pictured Rocks. Unless you enjoy bumpy offroading.