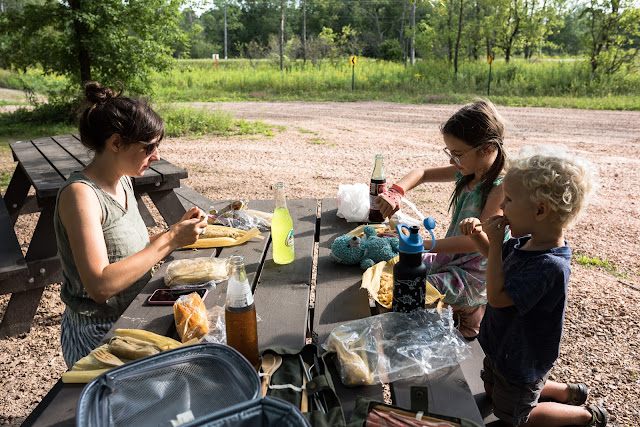 Back to the cottage again. This time we enjoyed our tamales at a trailhead for ATV and snowmobile trails in Cameron.
La Loma is still the best tamale shop in all of the Twin Cities. Perfect to bring along on a drive to the cottage. 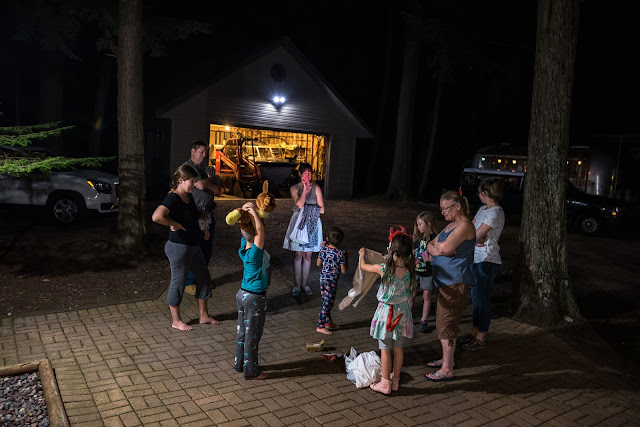 We decided to come up for Nolan and Harvey's birthday. We hadn't seen them since Thanksgiving and probably won't see them again until next summer.
It seemed like the best time to spend some time with the Gostishas and Farbers. With school back in person in Wisconsin, we'll have to reevaluate when we can see Brooke's sisters. Covid sucks.
Since we hadn't seen Chelsea in a long time we had more birthday presents to exchange. Theo got a new water bottle. Back in February, when it was his birthday, Chelsea asked me what Theo wanted/needed for his birthday. We had recently lost his water bottle in Mexico so I suggested he needed a new one. I obviously forgot all about this conversation. Earlier today while grocery shopping Scott picked up a new water bottle for him and I thought why did we take this long to buy him a new one? It wasn't until he opened his gift that I remembered. 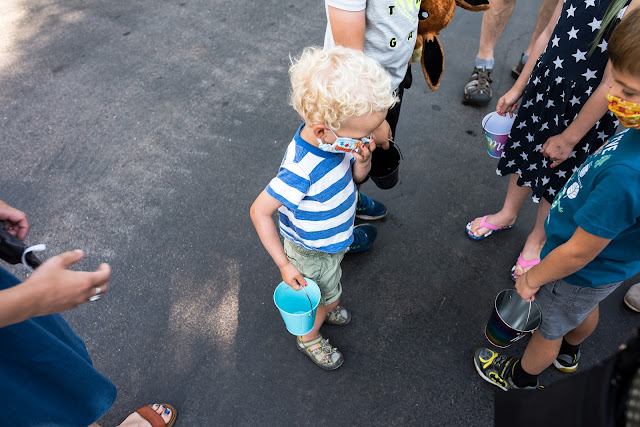 Chelsea chose the Wildwood Zoo in Minocqua for their day. She even got all the kids buckets with their names on them for animal food.
I suppose we could social distance here. 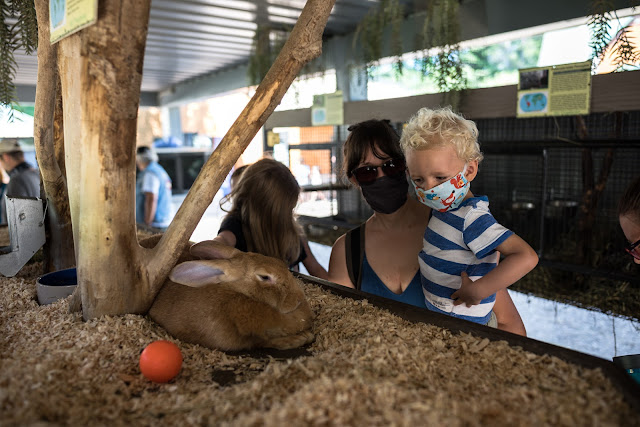 We thought it might be less busy if we got there soon after they opened. Apparently everyone thought that. It was much busier than we thought. 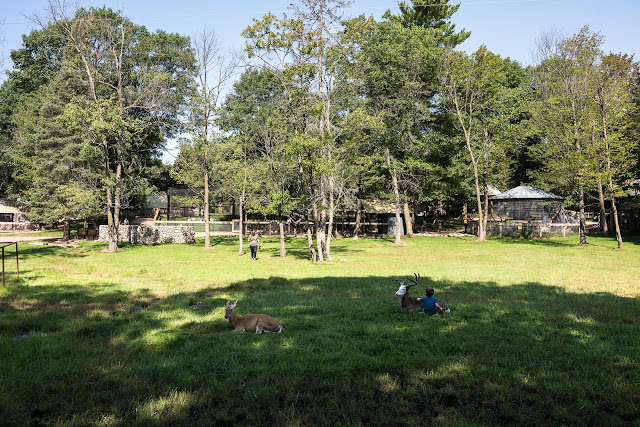 Oh, it's just Harvey becoming one with nature and returning to his deer herd.
He's always getting misplaced. He was just too excited to see the deer to wait for everyone else. 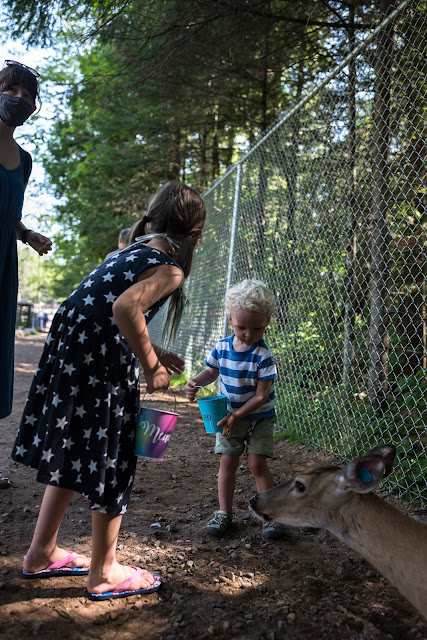 Theo and Meadow did great with feeding the animals. Somehow I've raised scaredy kids.
If they did great...were they really scaredy kids? 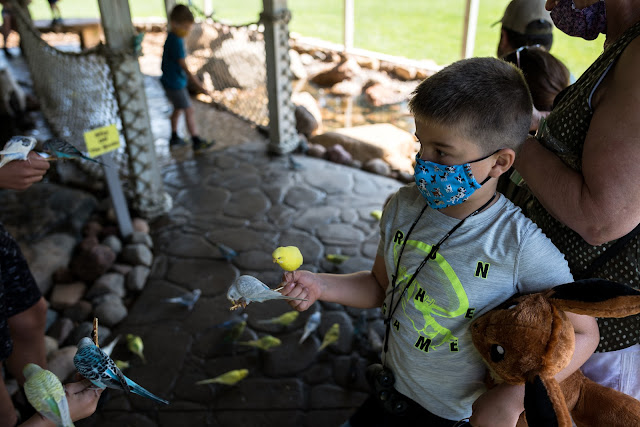 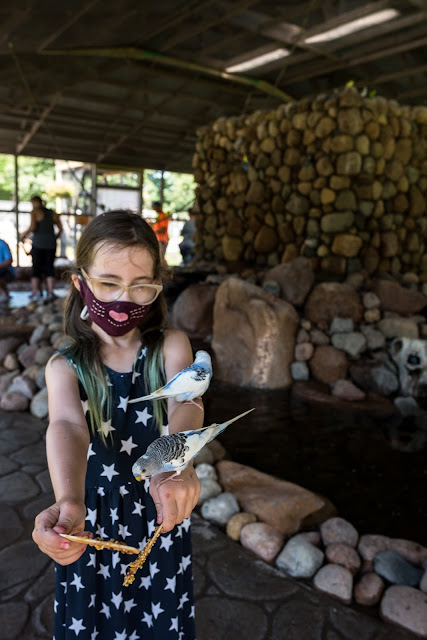 I can't believe Meadow loved the bird feeding area. She wanted to stay all day. 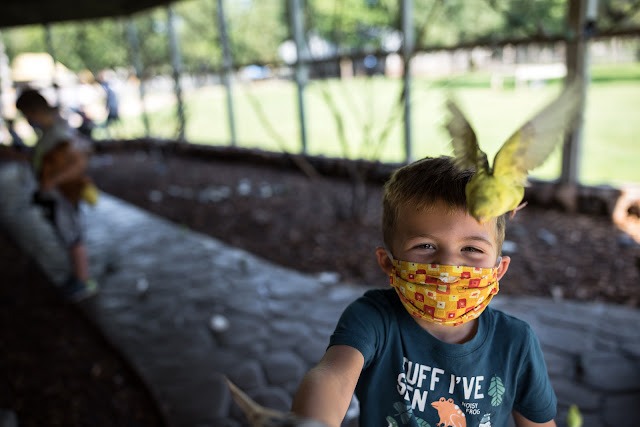 Those birds don't know how to give you space. 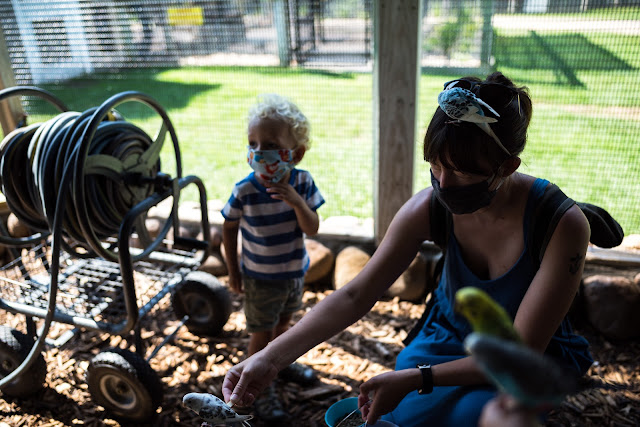 Theo wasn't as brave as Meadow. 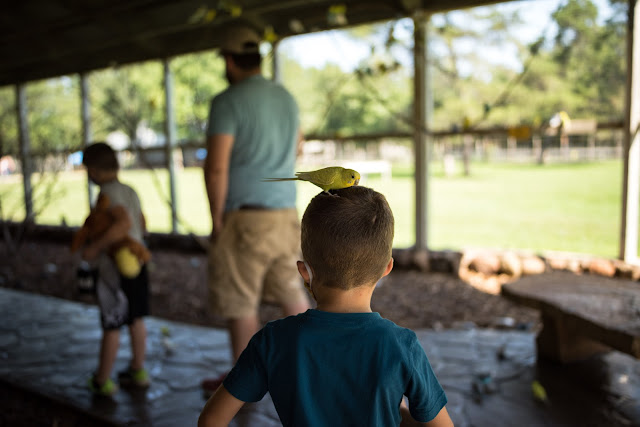 Harvy a bird is on your head. 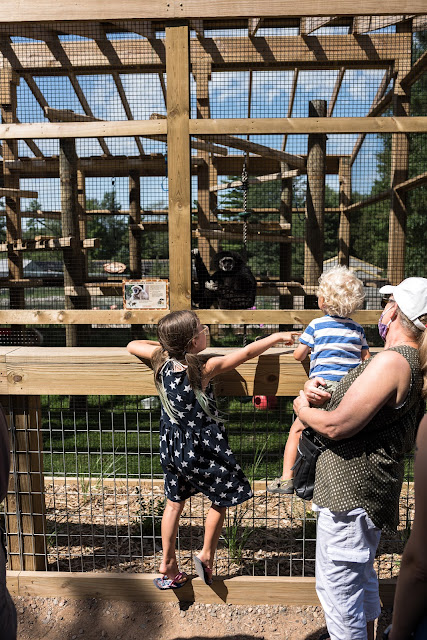 Then Theo got to see his favorite monkeys and primates. I got to say it's a pretty good zoo for not being in a big city.
It is apparently the second biggest zoo in the state. 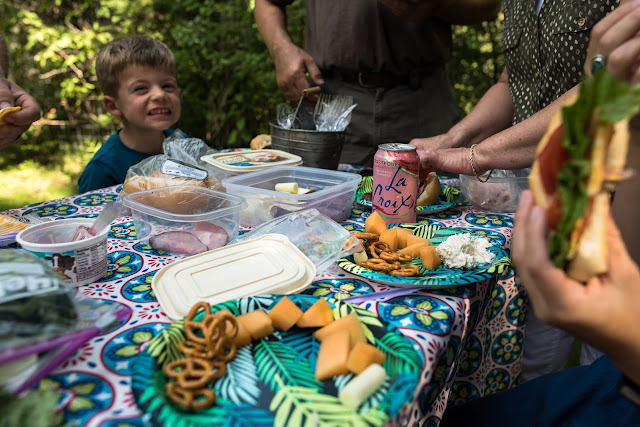 We took a break for lunch. 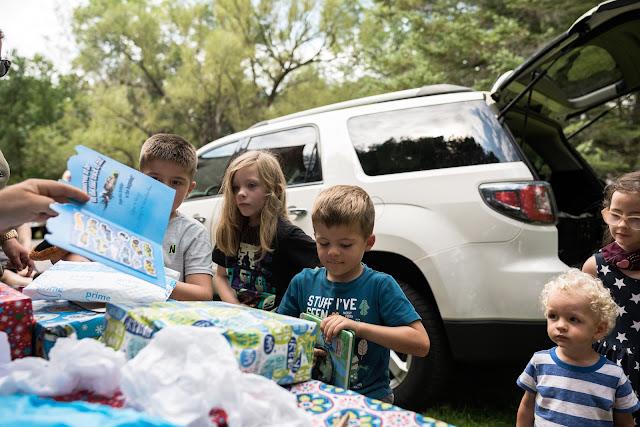 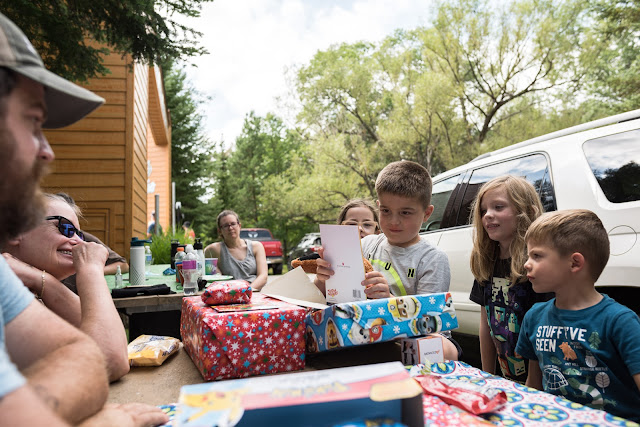 We had to order our gifts online. We chose the same camping plate set that Meadow and Theo use and apparently they're really popular this year because they were sold out at two REI's.
The boys would have to wait until they got home to enjoy them. 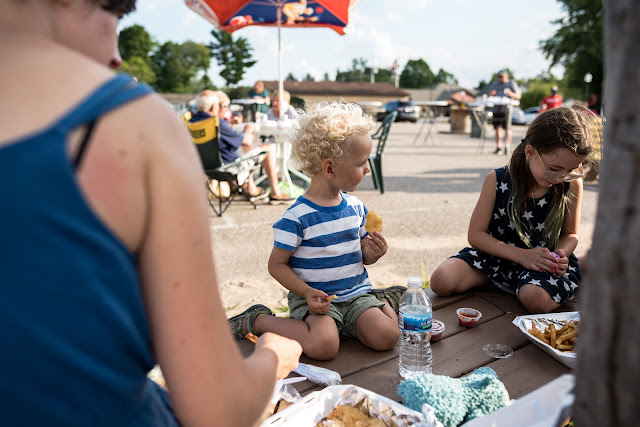 After more time at the zoo we were hungry for fish fry. The Onieda Village burned down last year and now they have popup dinners in their parking lot.
I was worried that they'd just let the empty lot sit fallow, but the food truck and big parking lot is perfect during Covid. 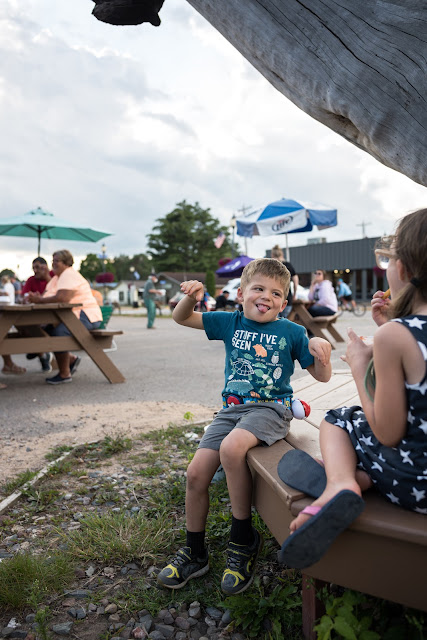 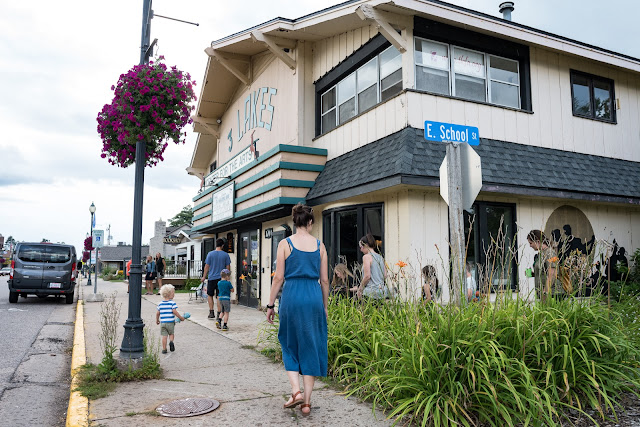 We took a walk around town and then it started pouring.
So, we went back home. 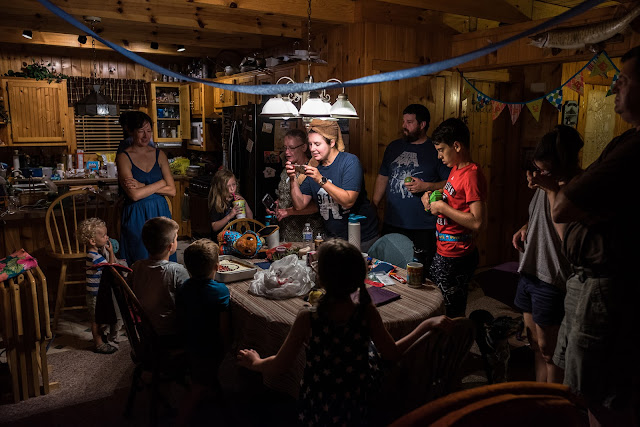 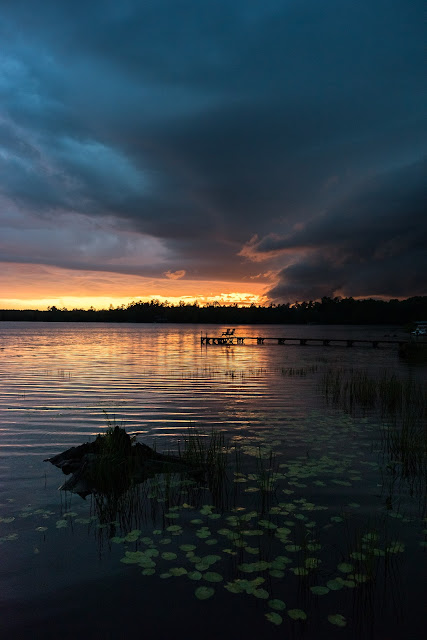 A tiny slice of the sun poked through during sunset.
They told me I just had to go out and get a shot. 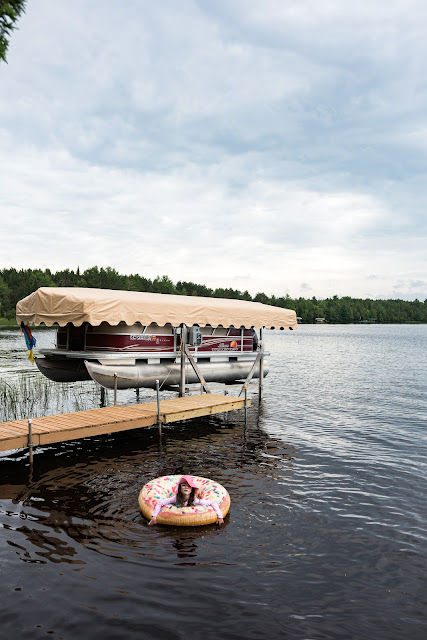 It had rained all night. The next day everyone claimed it was too cold to swim. Blake and I decided to do our annual, and when I say annual I mean it's been over 10 years, swim across the lake. I didn't know if I could do it, but it was a good swim. I should do it more.
After seeing us swim the kids decided it must be okay. 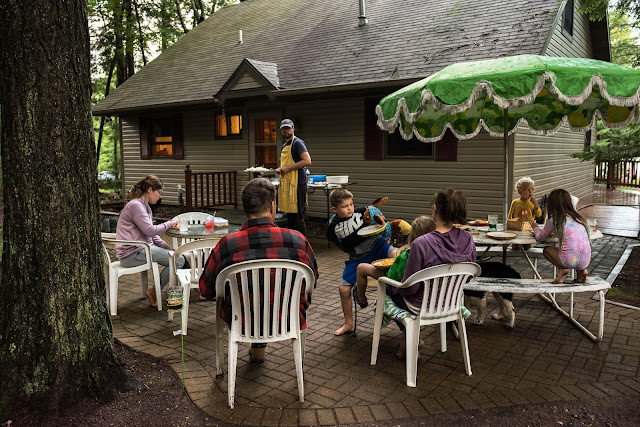 Then I was back on pizza duty. I had Brayden help me out. We really ought to get a second bbq pizza oven attachment since we have two Webber grills. 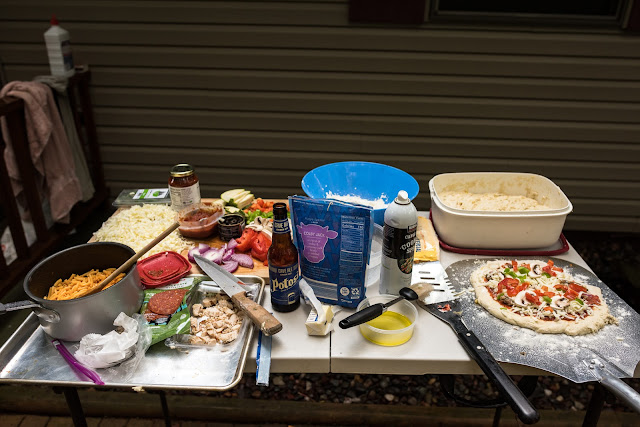 Pizza night is always a hit.
I'm going to be grilling these pizza for a long, long time. 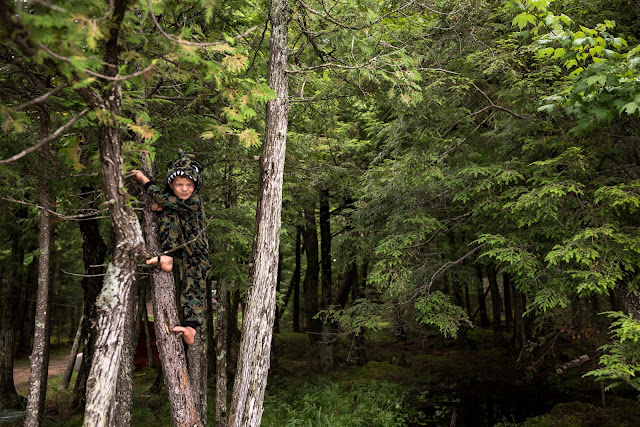 It's a wild animal. Oh, it's just Harvey. 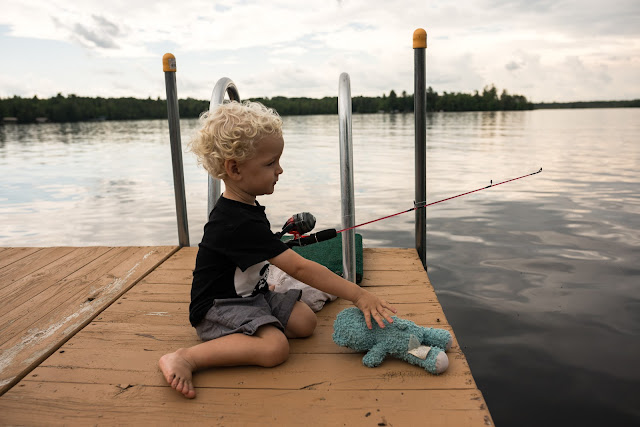 The weather was pretty yucky this weekend, so we didn't get much fishing in. Baby wanted Theo to show him how it's done. 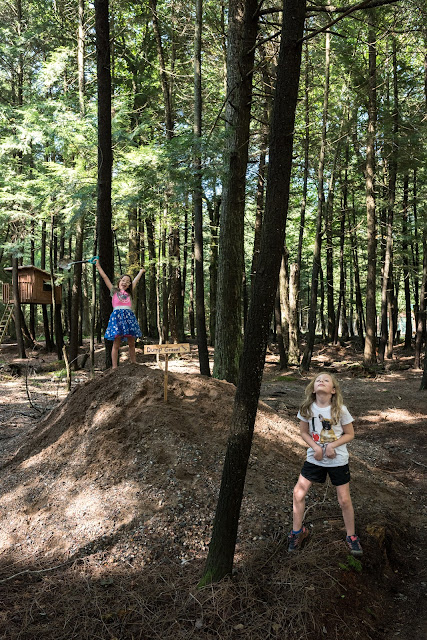 Meadow and Marina played all day while we helped clean up the cottage. Poor Meadow hasn't been around many kids the last few months.
The cousins all love playing together so much. Again, Covid sucks. 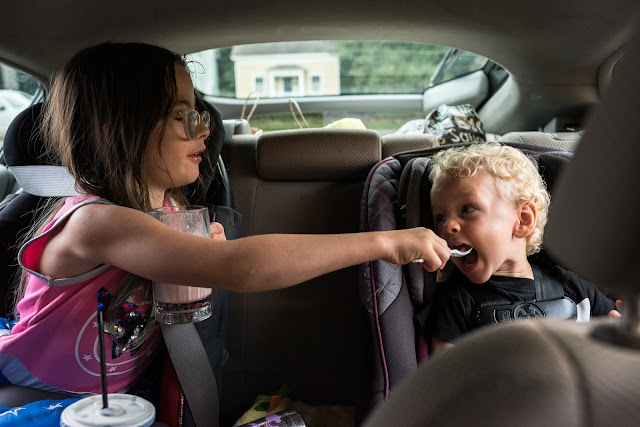 And then we started our journey back home. But we always get hungry as we approach the Minnesota-Wisconsin border.
We stopped to eat at The Drive In in Taylors Falls for dinner.
It'll do. Until next time, cottage.