Papa's Got a Job in Rhinelander, Let's Go to the Cottage. 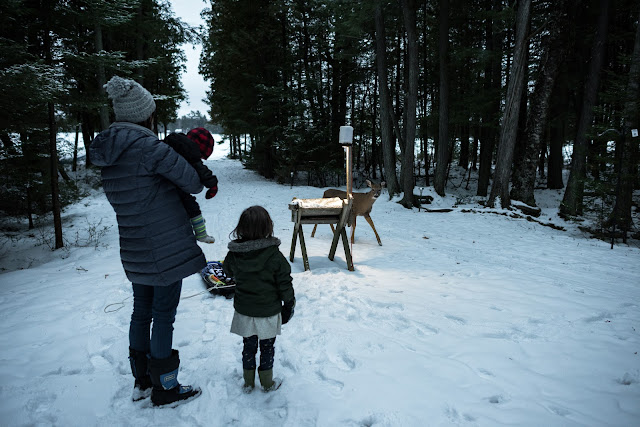 Scott picked up a job in Rhinelander so of course we came along for the weekend at the cottage. We even pulled Meadow out of school to go. She was excited to be absent.

We figured she can miss a day in school and learn a bit about the outdoors up north. 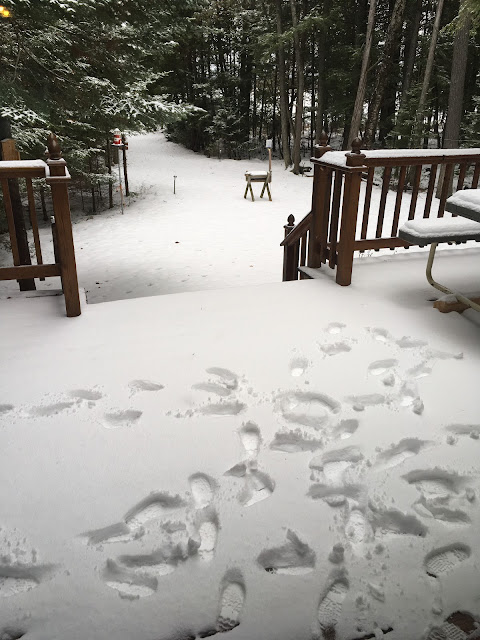 The cottage had more snow than we expected or planned for. We didn't bring any snow boots or snow pants. 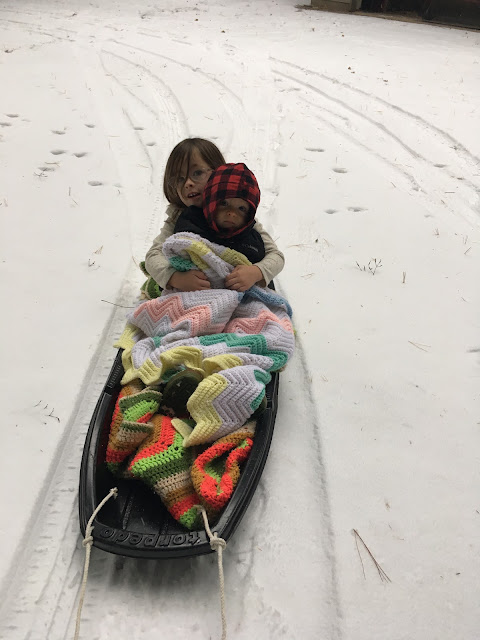 I wrapped the kids up in blankets and pulled them on the sled. Theo was not into it. 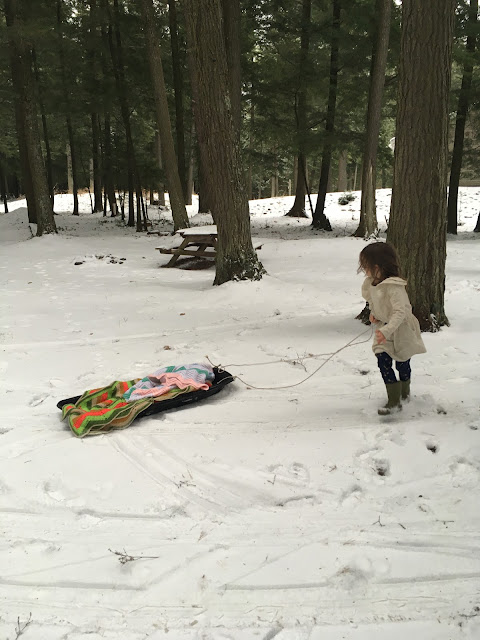 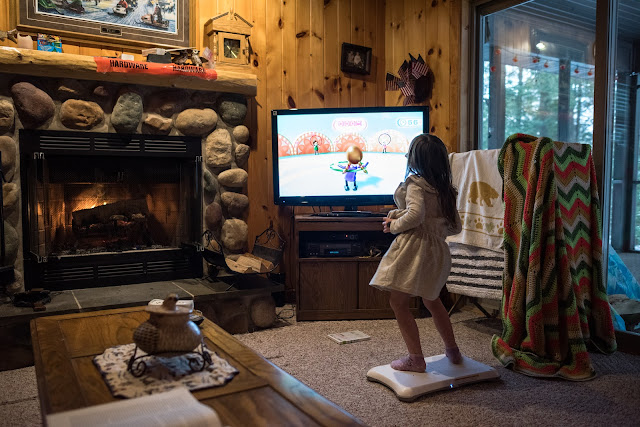 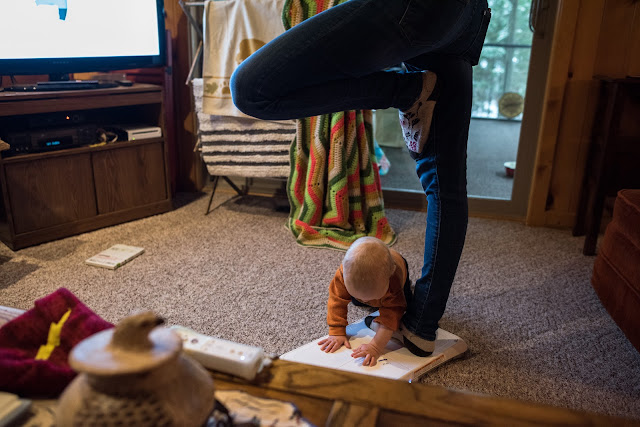 Theo wanted to play too. 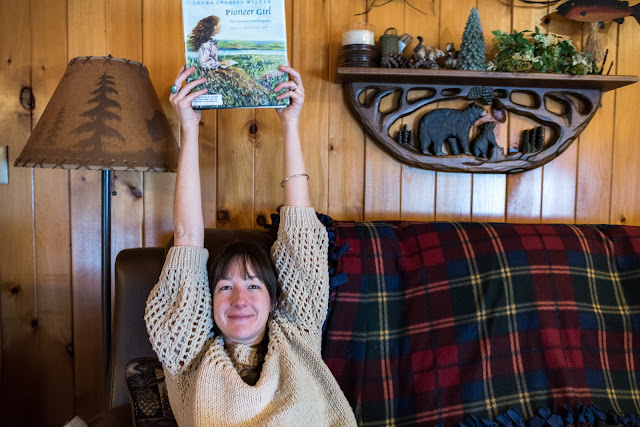 I finally finished reading Pioneer Girl. This is a big deal because I have been reading this big book since May. 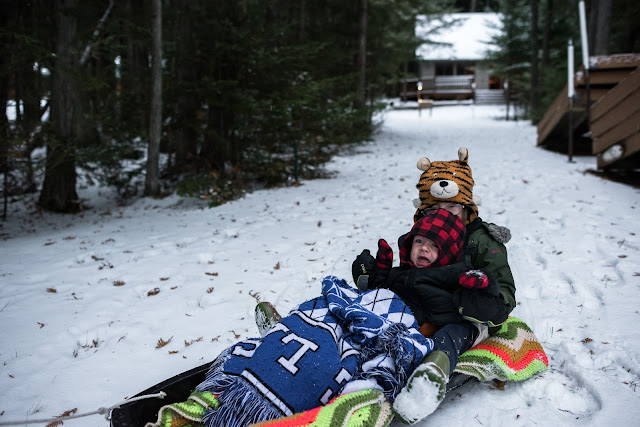 We tried Theo in the sled again. I thought maybe he didn't like it earlier because he was ready for a nap.

He cried every time he was in the sled, whether it was moving or not. 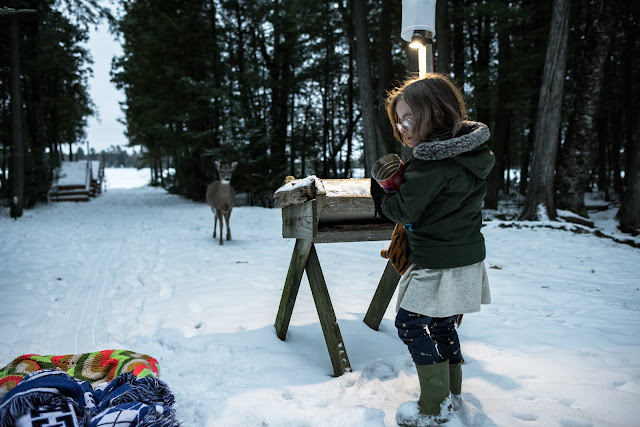 Despite all his screaming this lone deer came right up to us. 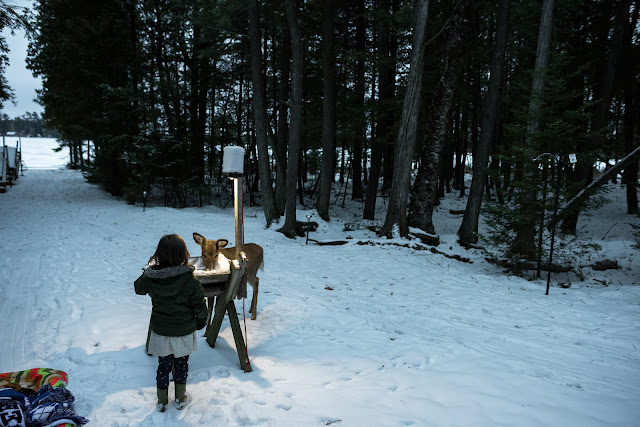 We tried to get the deer to eat out of Meadow's hand. She would get close but not that close.

We really shouldn't be feeding the deer due to chronic wasting disease, but the kids love seeing the deer. 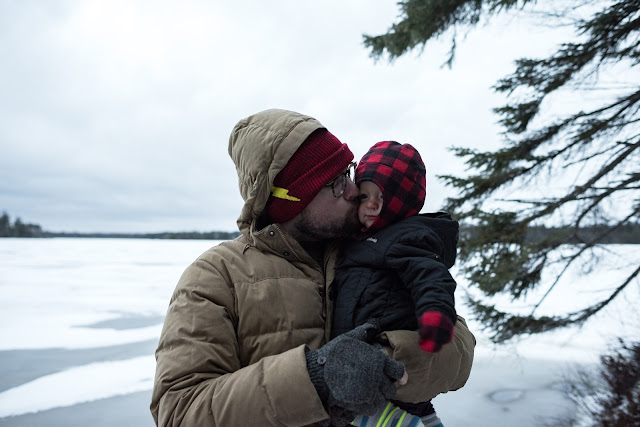 I was surprised to see the lake was frozen already.

Not quite walk out on the lake frozen, but almost there. 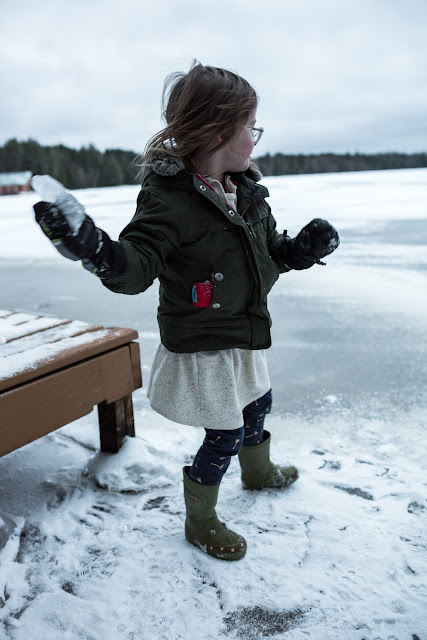 We played on the solid ice by the shore. 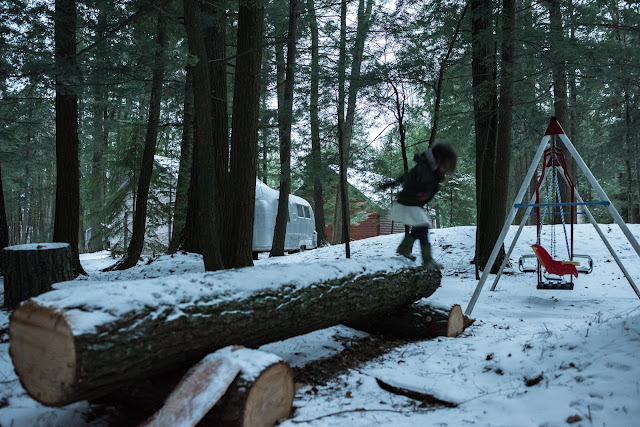 We also explored the new balance beam, Meadow went swinging again and then played at the end of the cul de sac. 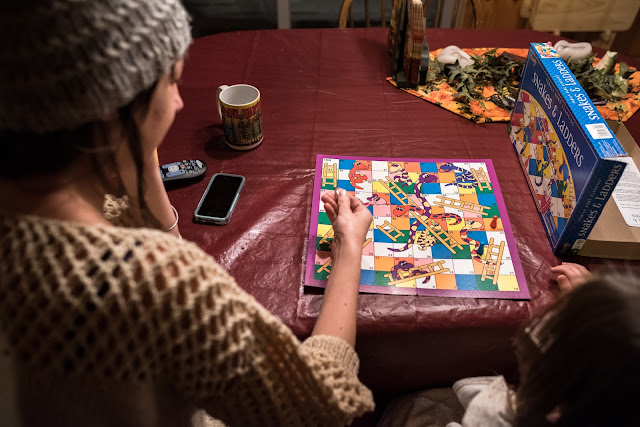 Back inside Meadow and I played Snakes and Ladders. 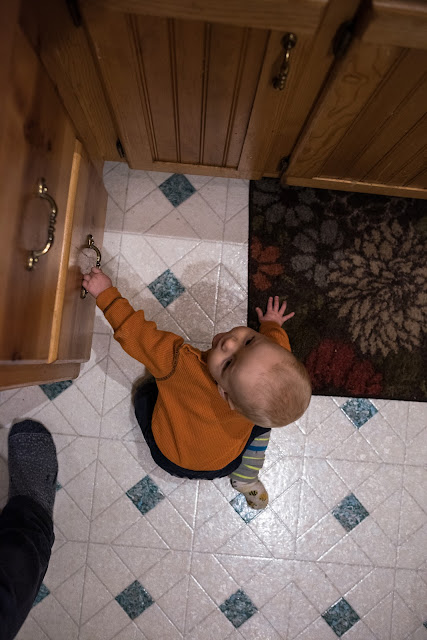 Theo's old enough to get in trouble, but usually just tugs at handles. 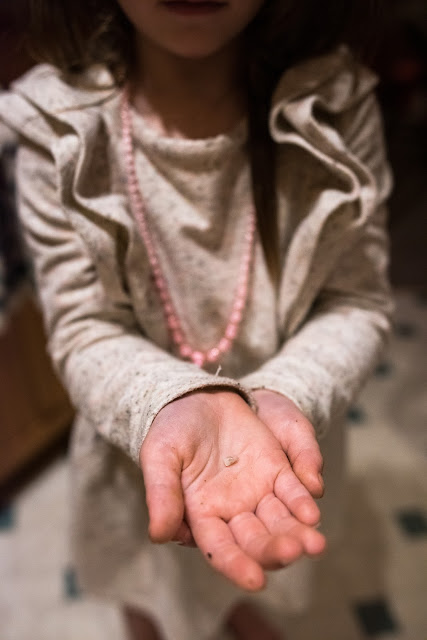 Meadow has had a loose tooth and today it came out. I can't believe how itty bitty it is.

She brushed up against me and the loose tooth was on it's way out soon thereafter. 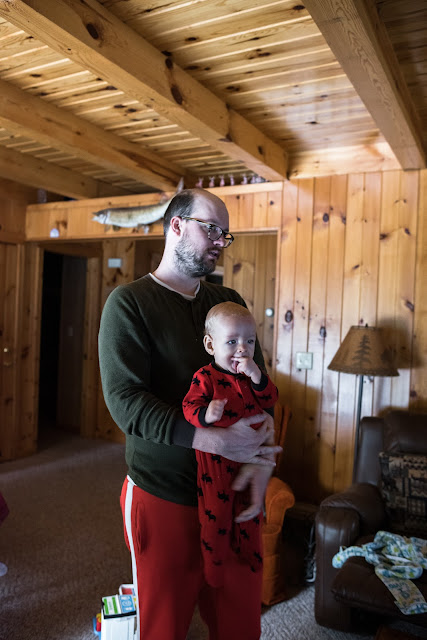 Even I got into playing Wii Fit. I guess it's more fun than it looks like watching everyone. I like how Wii games have aged so well.

He kept saying, I like real exercising. Then he tried it and got hooked. 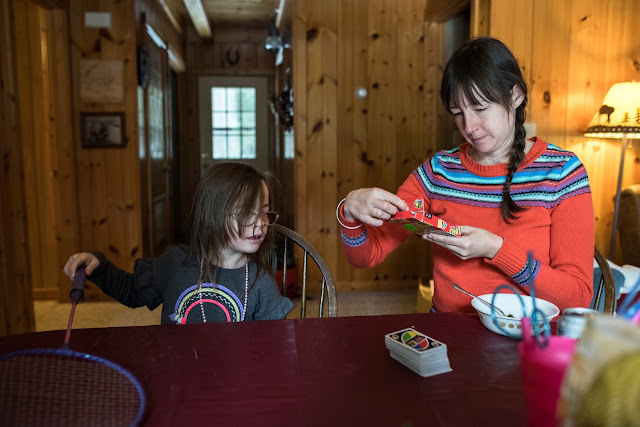 Meadow and I then played Uno. 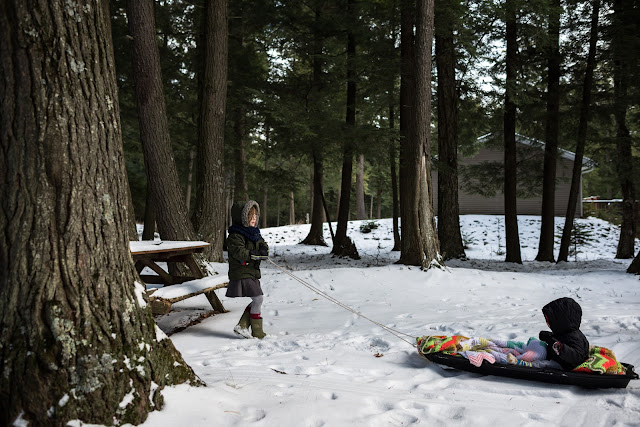 We tried taking Theo out on the sled again and he still didn't like it.

Maybe if he had the baby sled he'd be happier. 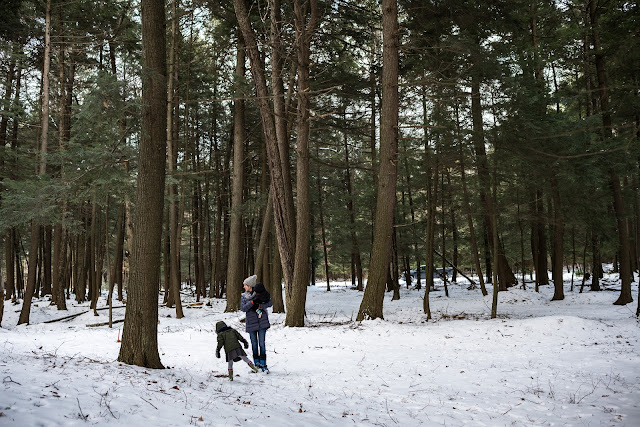 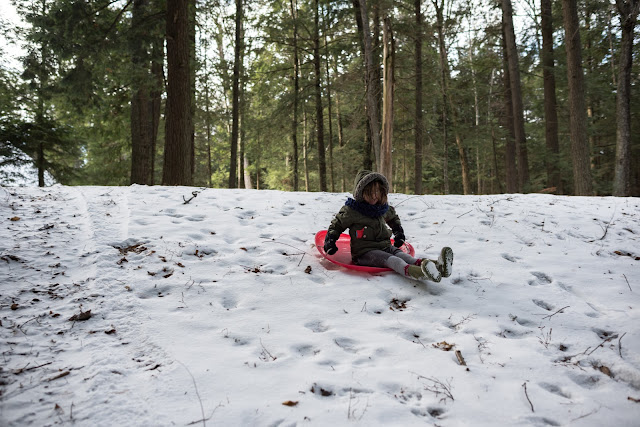 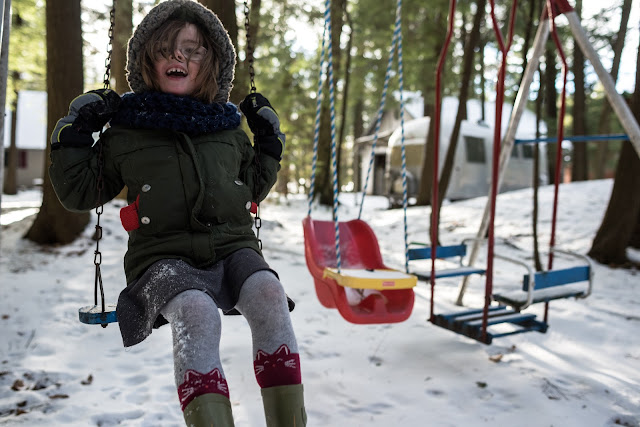 And of course swung some more. 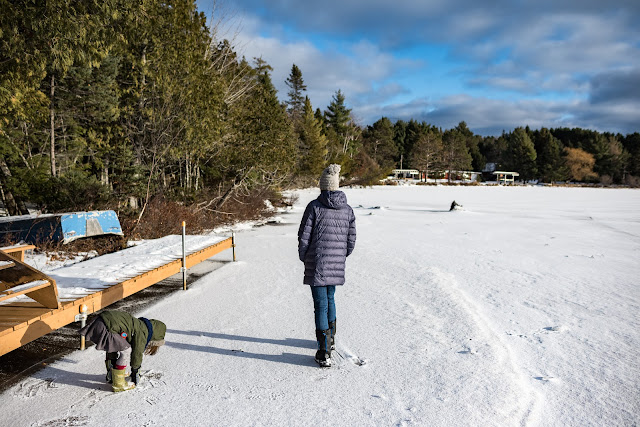 The lake was more frozen today. 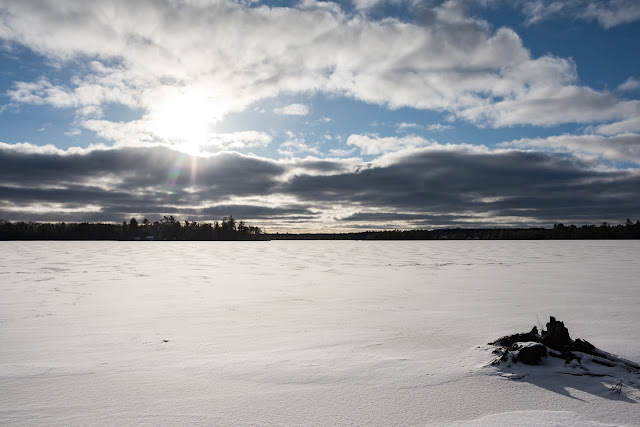 What a perfect place. Winter (or late Fall, really) is so peaceful. Hardly anyone comes up. The frozen winter landscape is yours to explore. 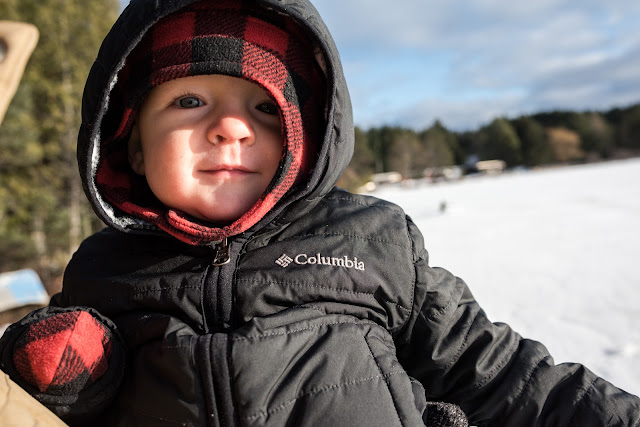 Theo was just fine having me carry him around and see his first frozen lake since April. 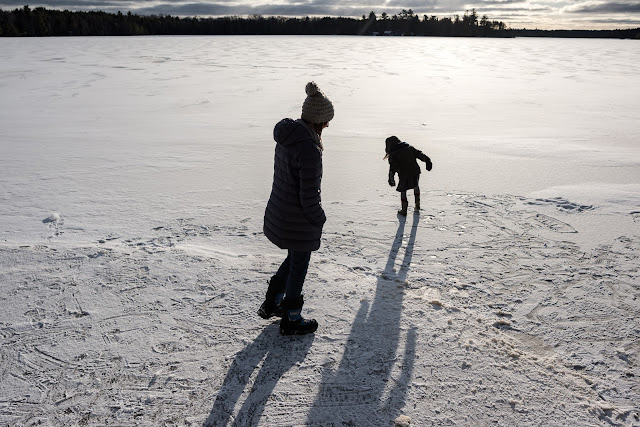 I wish the lake had been a little more frozen so we could fly our kites. 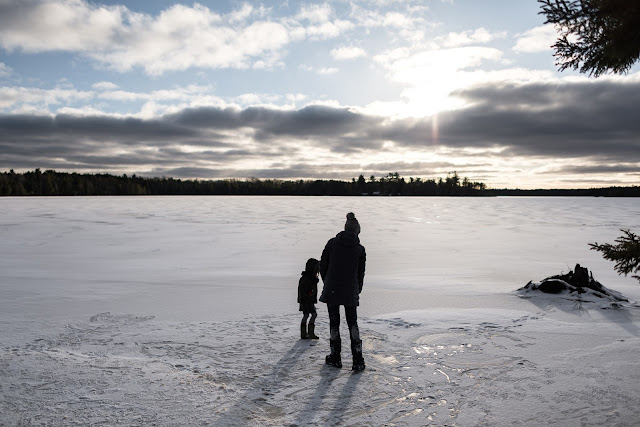 New Year's Eve will be here before you know it. 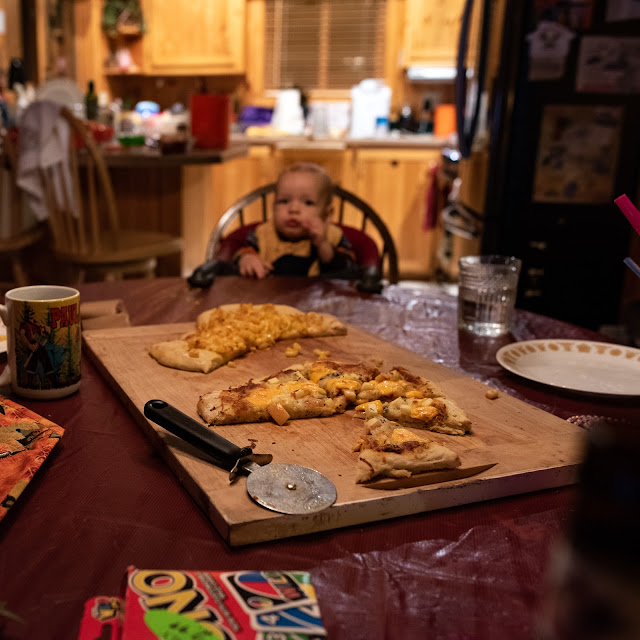 Since we were at the cottage we made pizza of course. Mac and cheese for Meadow and rosemary and apple pizza for us. 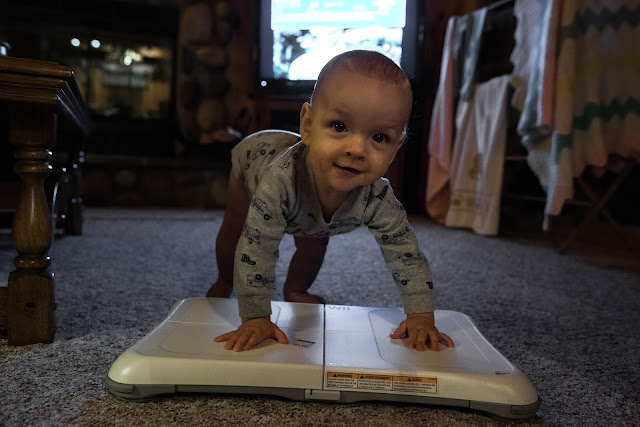 Theo wanted to get some more Wii Fit in before we had to head home the next morning.

He learns it from the best.