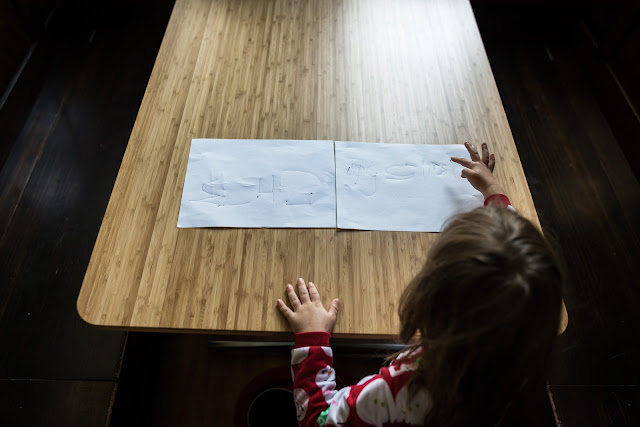 The other day Scott said, "Are we doing anything for our Anniversary?" I had honestly forgotten about it. We decided to skip finding a sitter last minute and have a day together instead.

Also, we kind of like doing things as a family. Is that so wrong? Maybe we'll change our minds when the next kid comes around.

I feel like I see Scott all the time so I don't ever feel the need to go out on dates. I'd rather go out with friends on a group date. 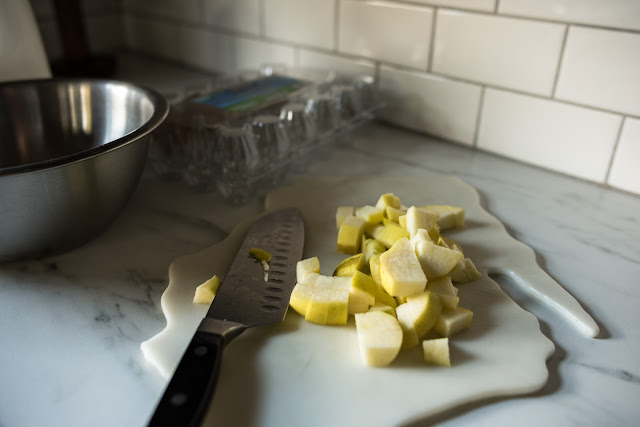 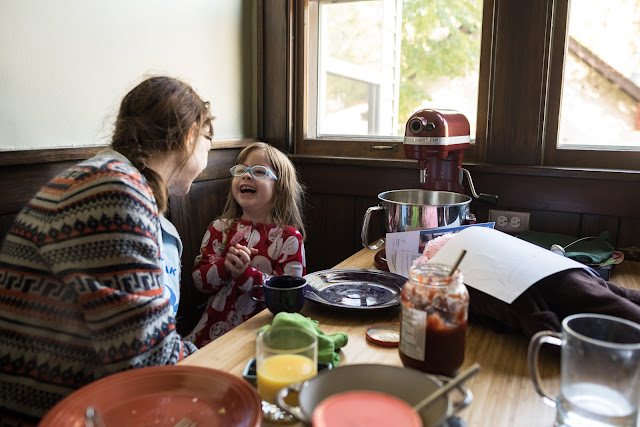 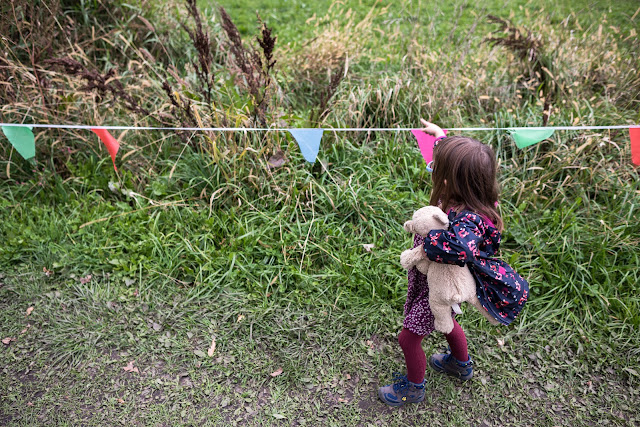 We had plans to go apple picking today anyway. This year I chose the Fall Harvest Orchard.

It would be a perfect starting point for our day west of the cities. On the way in Meadow shouted out every color flag. 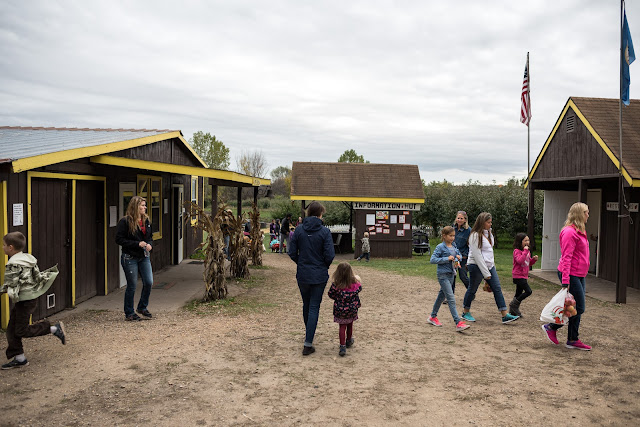 When we arrived I asked Meadow if she wanted to see the animals or go in the corn pit. She madly said, "No! I want to go apple picking!" 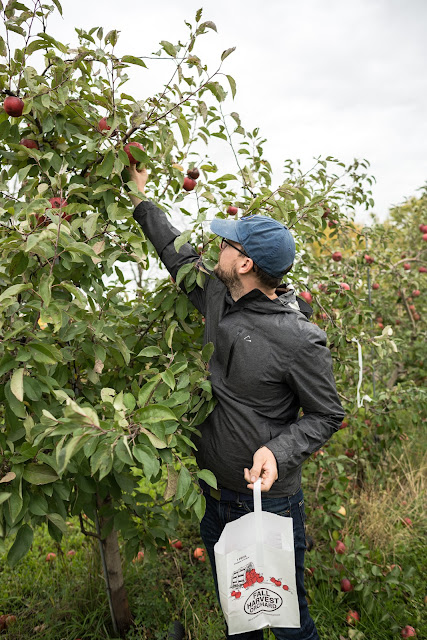 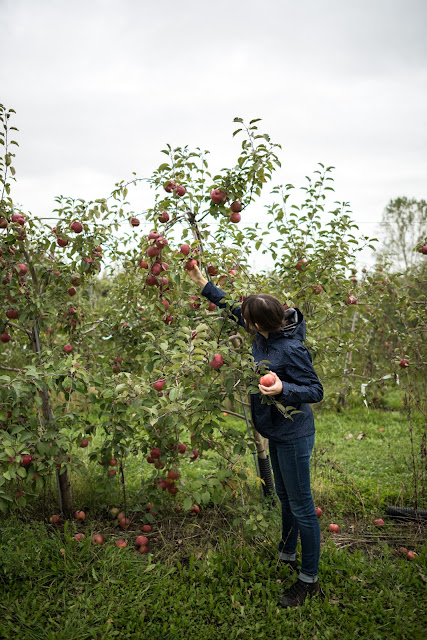 I think this is the first time we have gone picking and it wasn't over 75 degrees. I was hoping the late in the season, cooler weather, looks like rain would mean it would be less busy. There was still a lot of people here. 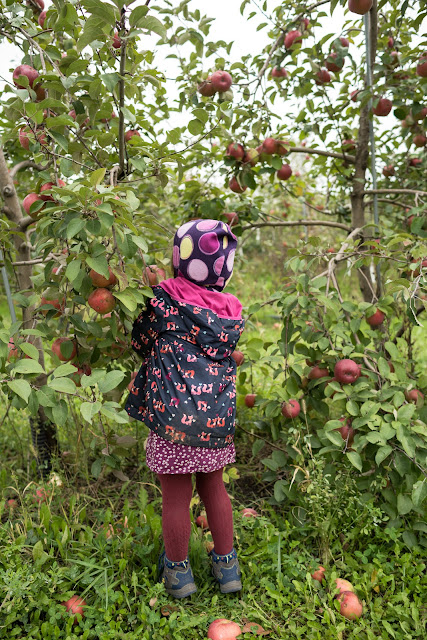 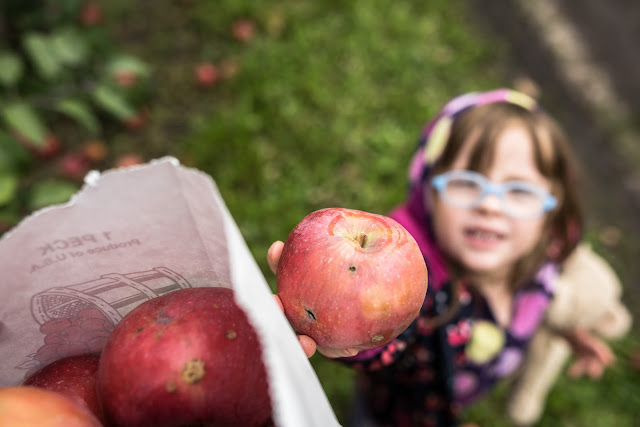 The apples were a bit dinged from hail storms, but we didn't mind. 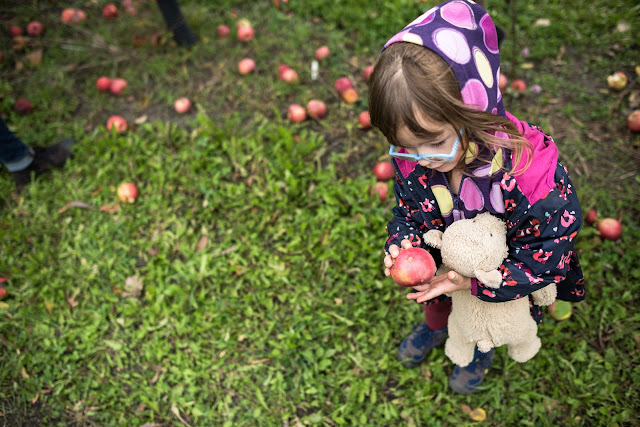 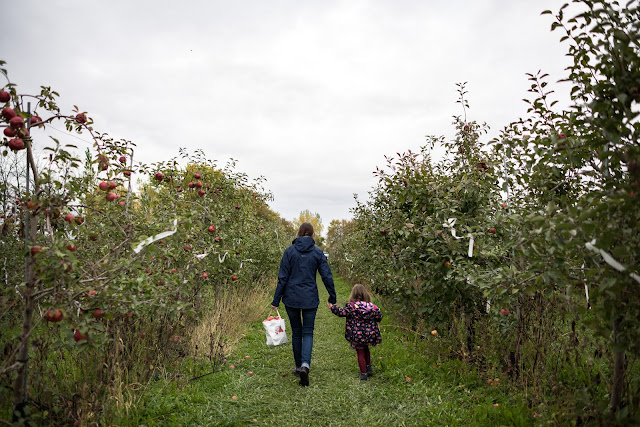 We filled up our bag quickly. So much faster apple picking than berry picking. I'm still surprised at how many people come all the way out here and buy the pre-picked apples instead of picking their own. 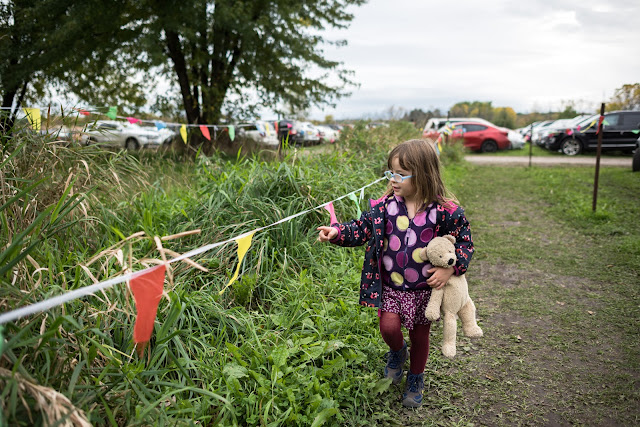 She did the same naming the flag colors game when we went back to farm activities.

She also picked an all purple outfit for the day. 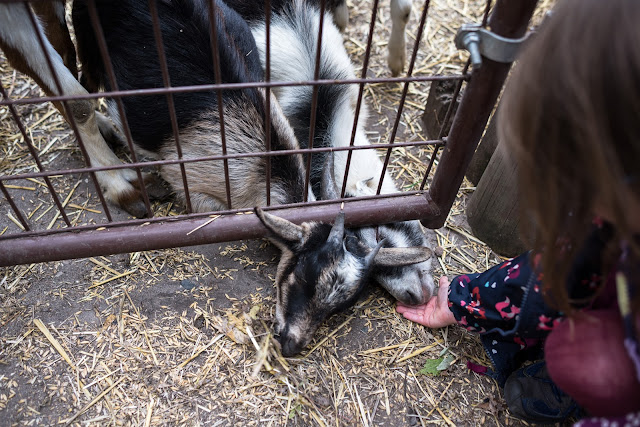 With apple picking out of the way Meadow was ready to do the other things. This place gives you a free bag of oats to feed the animals. I thought Meadow would be too scared, but she loved it. 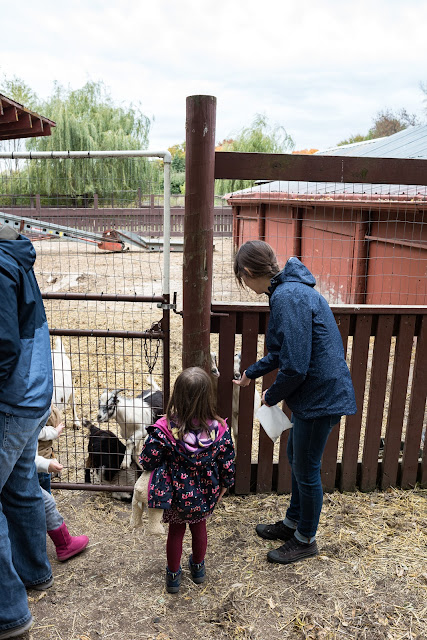 She giggled every time they licked her hand. 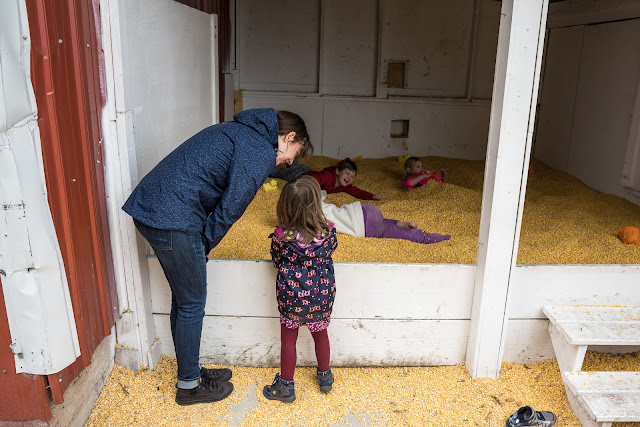 She was, however, too scared to go in the corn pit with the other kids. She preferred playing from the outside. 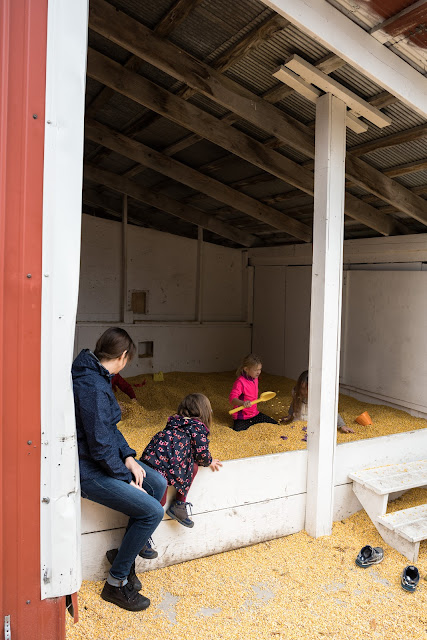 She didn't like the bigger kids that were roughhousing in the corn pit. 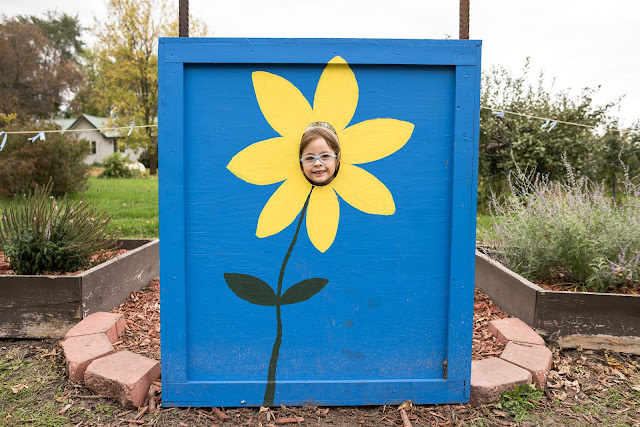 After lots of kicking and screaming we were able to pull her away from the corn pit.

The edge of the corn pit that is.

I spotted a face cutout photo op for Meadow. 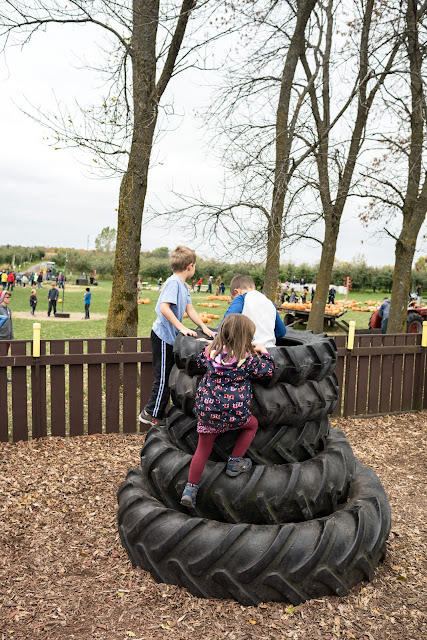 Then she spent a good twenty minutes playing in and on the old tire playground. 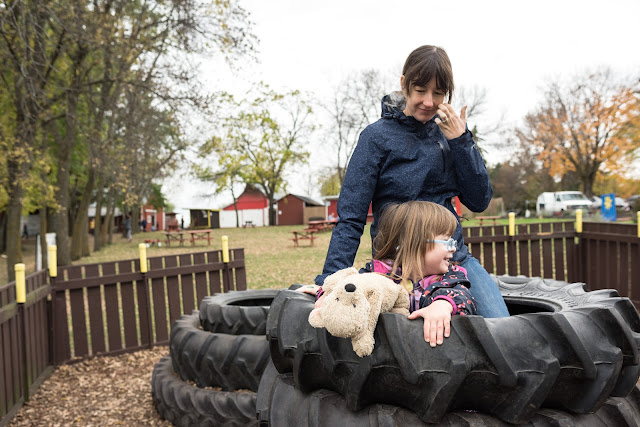 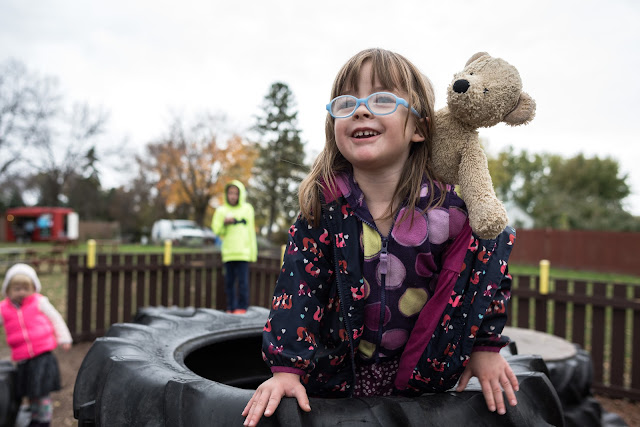 "Me and Teddy are adventuring." 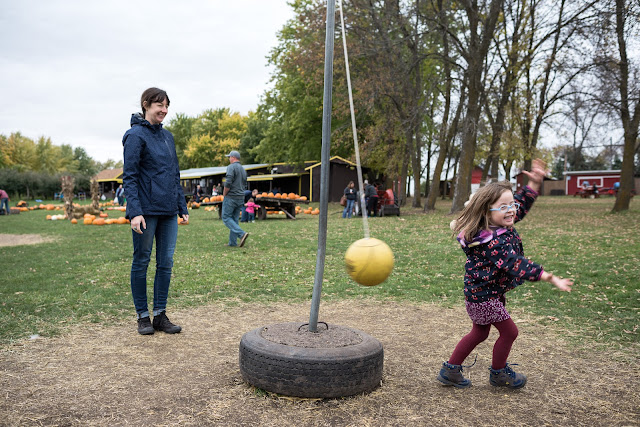 This place had a few yard games including tether ball. Meadow thought this was the funnest thing ever and laughed the whole time. 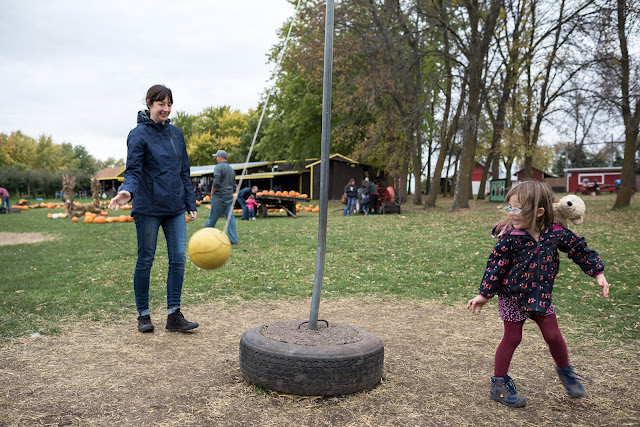 I've never played that either. 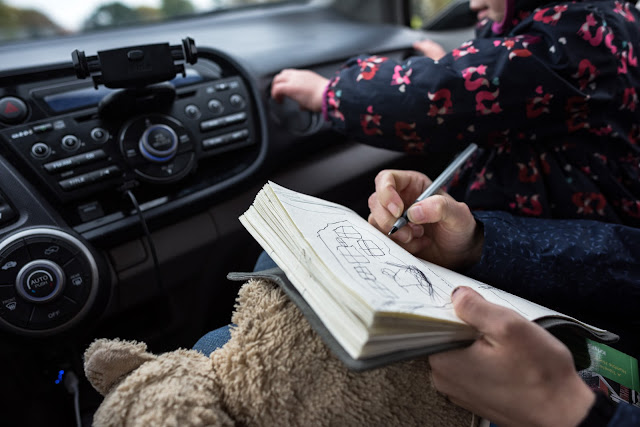 Eventually we got Meadow to leave the farm and we drove to Lake Howard. We arrived before the restaurant we wanted to go to was open. To kill time we stopped at a playground. Neither one of us wanted to go outside and Meadow was too scared to go by herself because other kids were there. Instead she drew the playground. 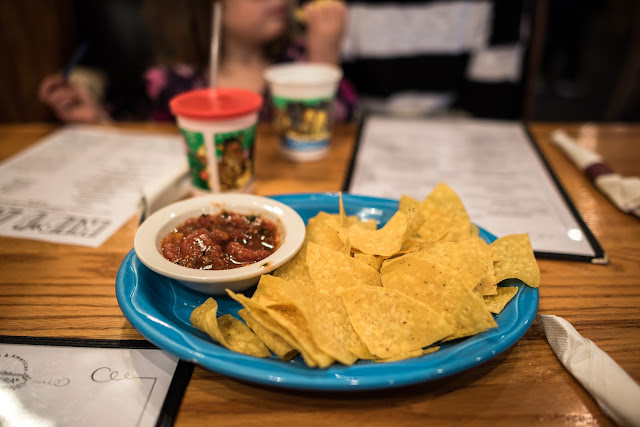 Chef Carlos catered our wedding and had recently opened a restaurant called Frontera Cafe and Bistro. Today seemed like the appropriate day to check it out.

The chips and salsa were top notch. 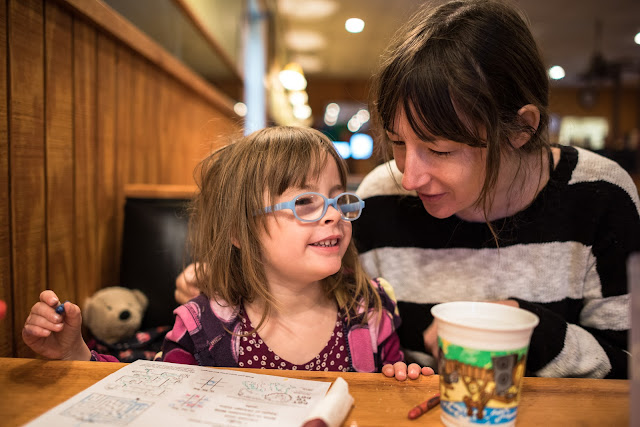 They had a kids menu with games to kill the time. 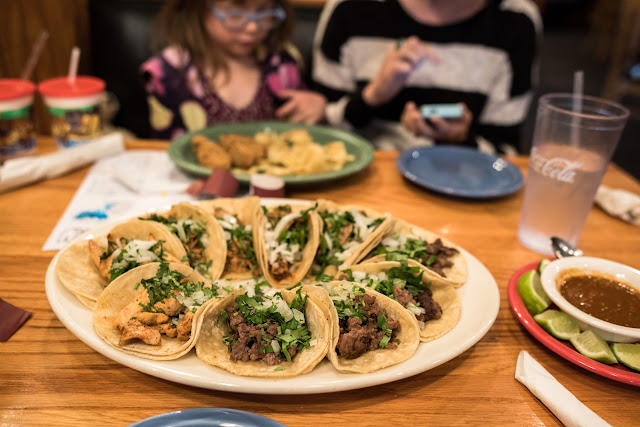 We opted for the taco feast. Five different meats, which you get two of each. The smoky salsa was perfect. Only one meat I remember distinctly from our wedding night.

The food was so good. We could have shared this as a family. 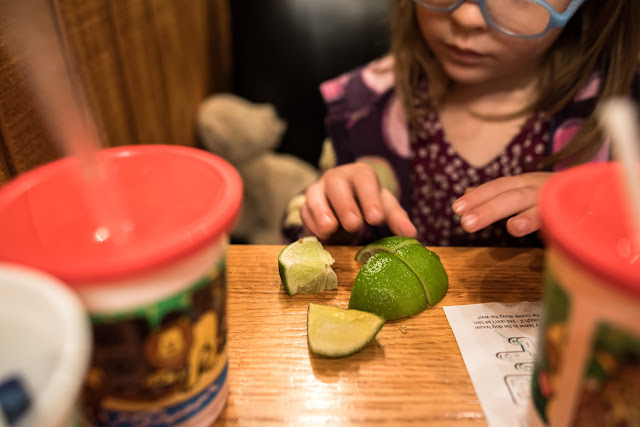 Meadow figured out the lime pieces fit together like a puzzle. 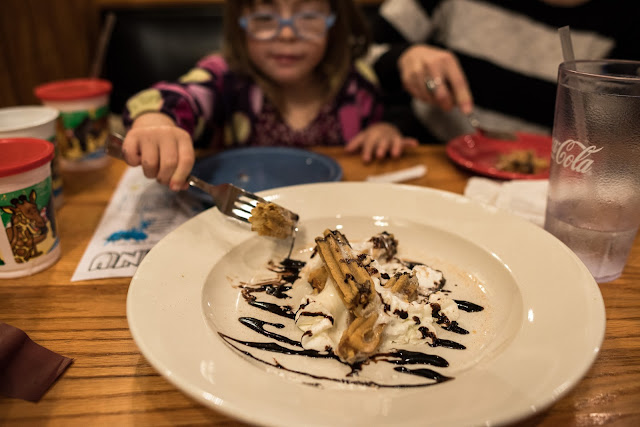 We were thinking about going to get ice cream or late night donuts, but thought we should support the little guy. We got churros and they did not disappoint.

We will definitely be back. Just wish it was a little closer. 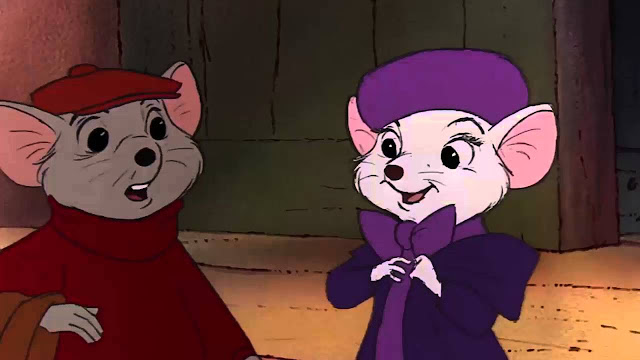 When we got back home we watched the movie The Rescuers together.

I didn't even know that there was a "The Rescuers." I'd only ever heard of the sequel. 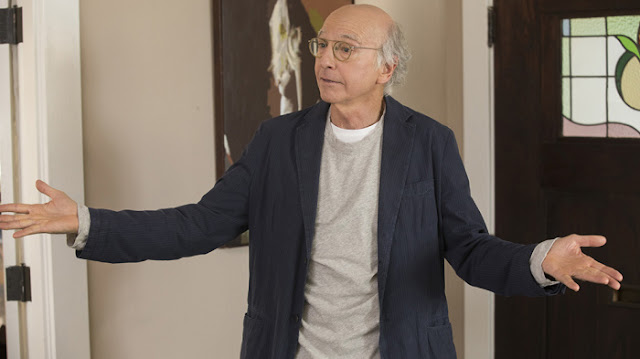 After Meadow went to bed I stayed awake to watch the new season of Curb Your Enthusiasm with Scott.

I know it sounds dorky, but it's fun that whether it's Curb, camping or canning, we always find a common love. Marriage isn't always easy, I know I can be a grump, but it's amazing to spend your life with a person that you truly have so many things in common with. And when we don't we still find a way to enjoy the other persons interest. I love this gal.