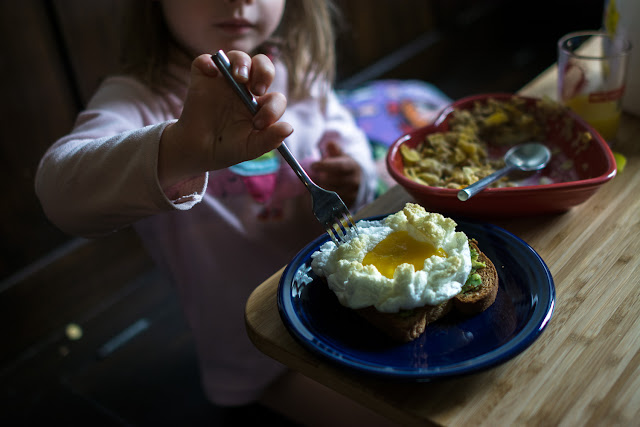 I surprised everyone for breakfast with cloud eggs. Actually I showed Meadow what I'd be making right away and she said no. When they came out of the oven she had to have one of course. 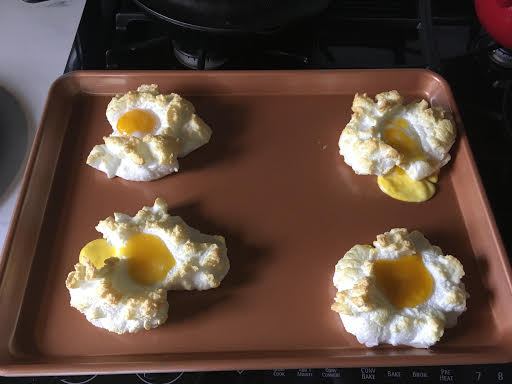 I on the other hand found this to be the weirdest breakfast food I have ever eaten. A for effort, but styrofoam eggs was kind of icky.

Whatever, they were awesome and I plan to make them again. 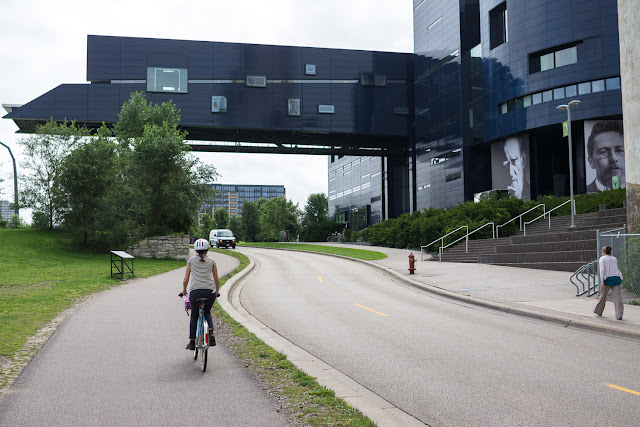 We haven't been to the Minnesota State Fair since 2011. With this being the last year Meadow can go for free we decided to check it out. We took our usual route of biking to the U of M and catching the shuttle.

Only later we realized could have taken the much closer shuttle at the Parade Grounds. Ah well. 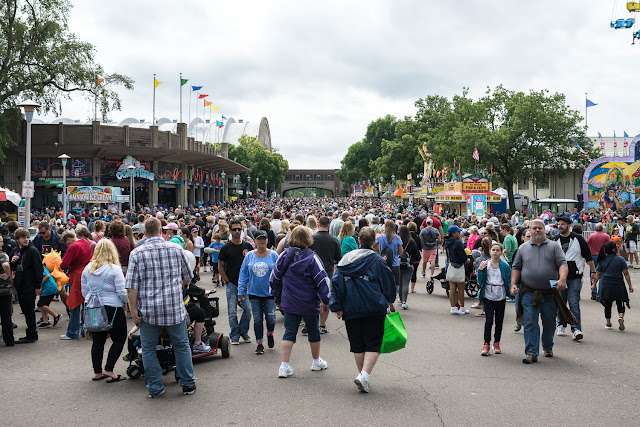 It was fun having Meadow along. She was so interested in everything we saw. 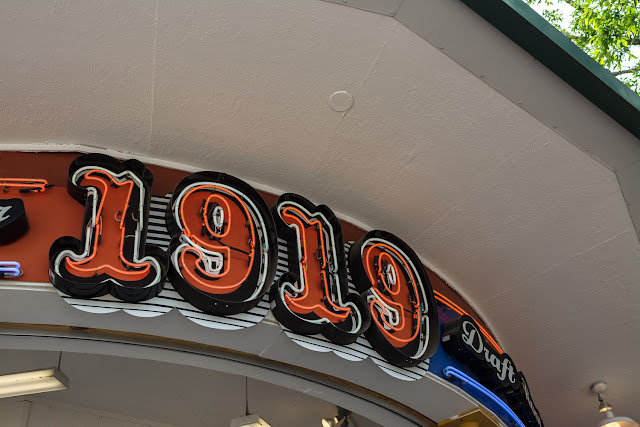 We were going to get a shake by the cow building, but found out that they just serve land o' lakes ice cream. So, we decided to get the jumbo root beer float at the 1919 stand instead. 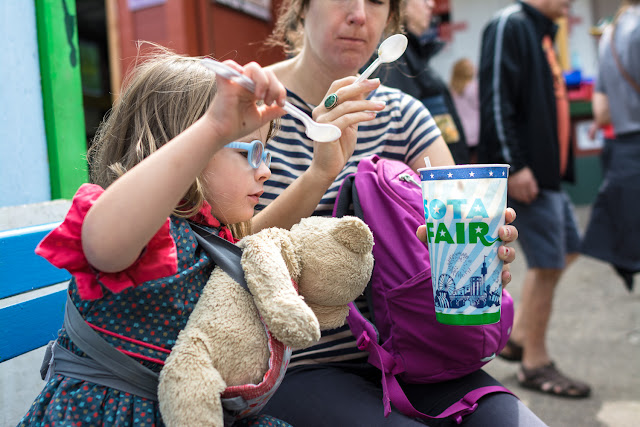 It just has Kemp's ice cream, but the root beer is straight out of New Ulm. 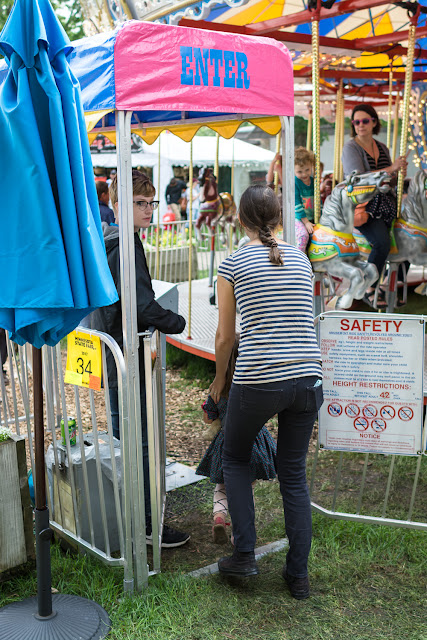 When we came in I asked Meadow if she wanted to eat, go on rides or see animals first. She chose eat and of course rides would be next. We found a carousal that was away from the midway. 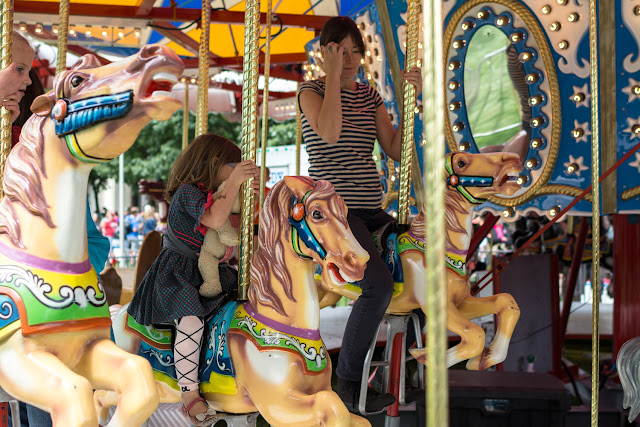 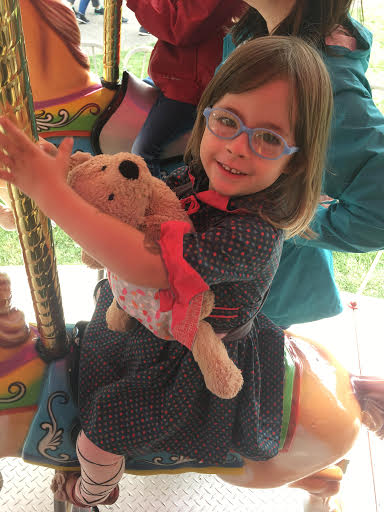 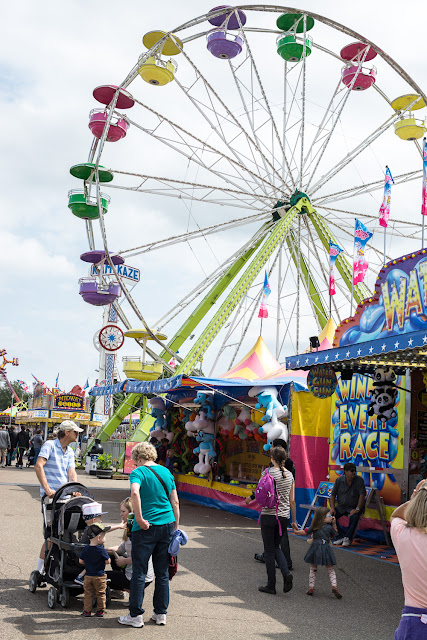 We then walked over to the Midway thinking there would be a few more rides for Meadow. You can tell we're not regulars. Only adult rides are on the Mighty Midway and the kids rides are over by Machinery Hill at the Kidway. 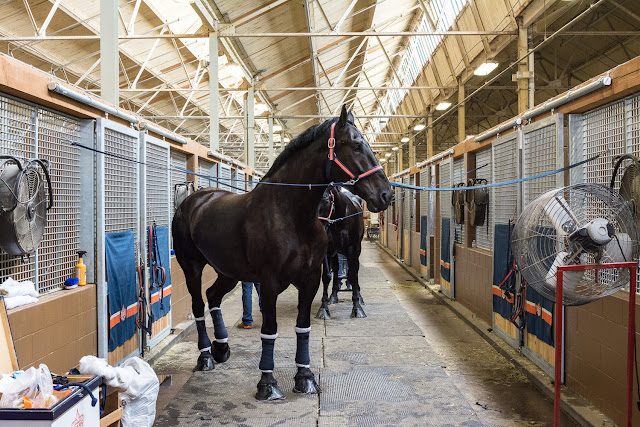 After the midway we headed over to the animal barns. Meadow was only interested in the horses.

We did stop briefly watch the 4-H cattle competition at the coliseum, but realized we were hungry for food and really wanted to come back for the horse show later in the day. Only we never made it back.

There was too much to do and see. 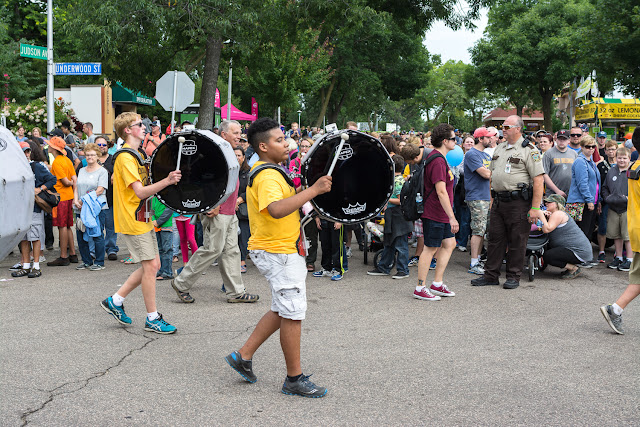 As we were making our way to the International Bazzar we stumbled upon a parade. So we watched said parade. 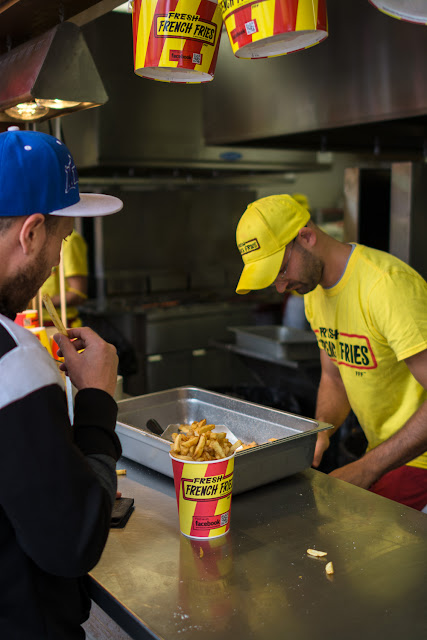 It was going for a long time, so I got a bucket of french fries. I guess besides the bucket of cookies, this is a classic stop for many fairgoers. 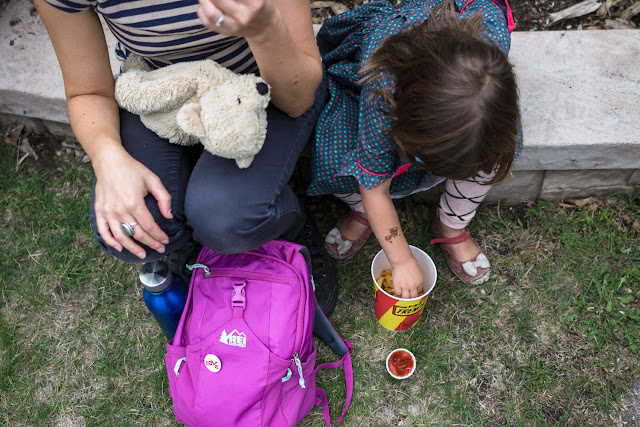 After the parade we took a break with our french fries.

They were really good. 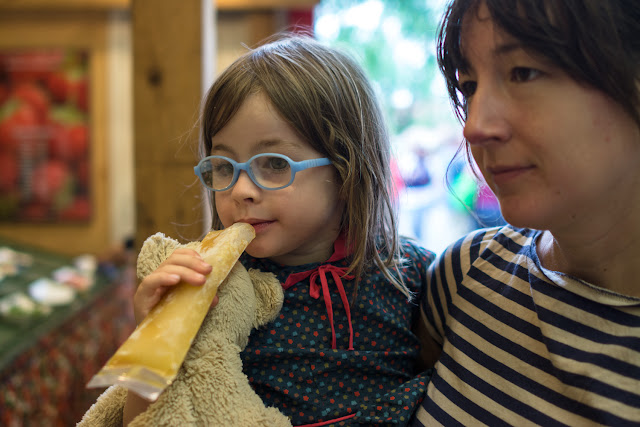 I wanted to go see the Agriculture building. That's when we happened upon the frozen cider treats.

How have we never had these before? Perhaps they started after we last came to the fair. 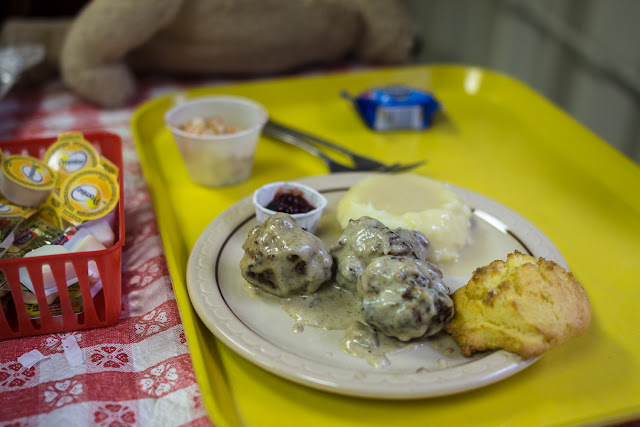 We read that the Hamline Dining Hall had one of the bests foods at the fair: wild rice meatballs. 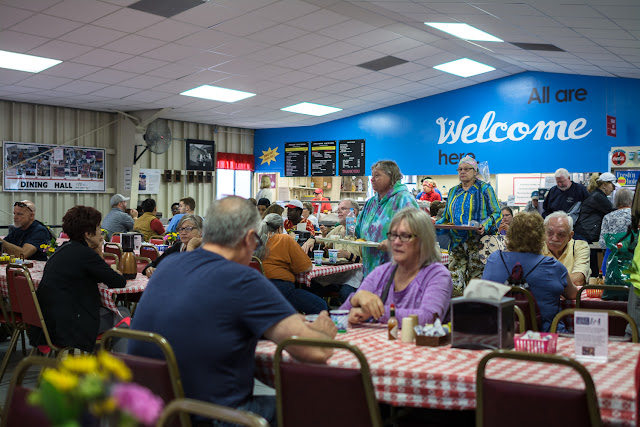 They were pretty good, but the ambience and the relaxed setting away from the hustle and bustle of the fair was a nice escape.

The disadvantage was it was $12 for a plate and Meadow's pb&j was $5. Scott and I shared the plate, but it was probably the most homemade thing at the fair.

I next wanted to see the 4H building. One area had a bunch of fairy gardens. 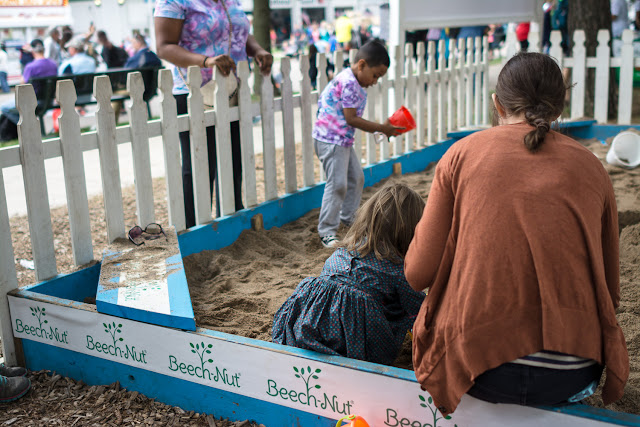 We were looking through the art building when Meadow started acting up. So, instead I took her over to a giant sand box. Then Brooke joined us.

Having never been here with kids  before I didn't realize how many kid friendly things there were to do. 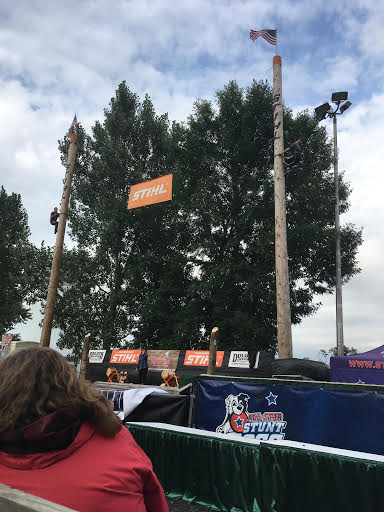 We had to talk Meadow away from giant sand box and stumbled upon the lumberjack show. 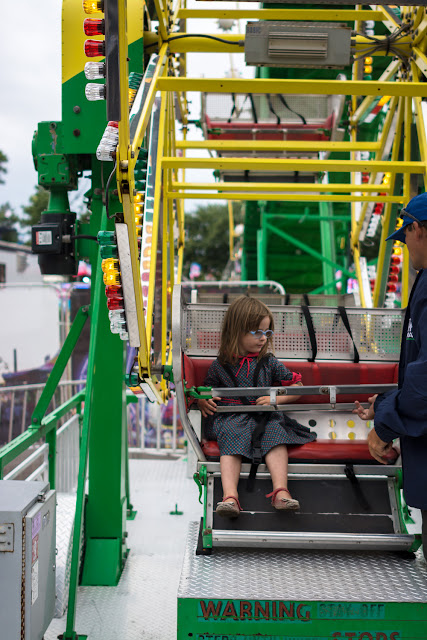 Meadow then asked to go on more rides. We walked through the kidway and didn't see any rides Meadow would be brave enough to do, until we saw the mini ferris wheel. We told her she had to go by herself and she was okay with it. The mini ferris wheel was the cutest thing ever. Bay Beach needs to get one. 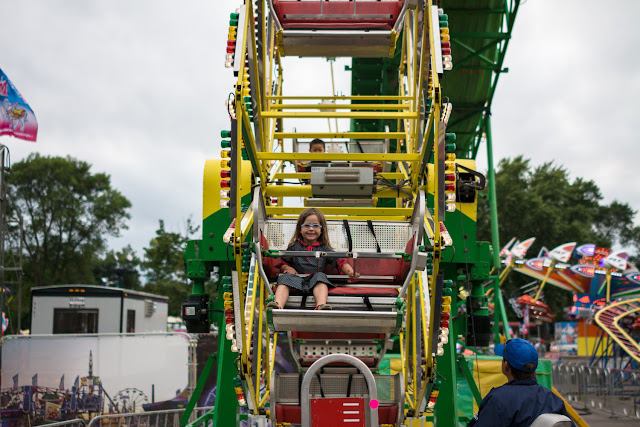 She couldn't have been happier. She'd loved the ferris wheel a week back at Paul Bunyan Land and this was not different.

Every time we brought up the fair after this day she would talk about the ferris wheel. 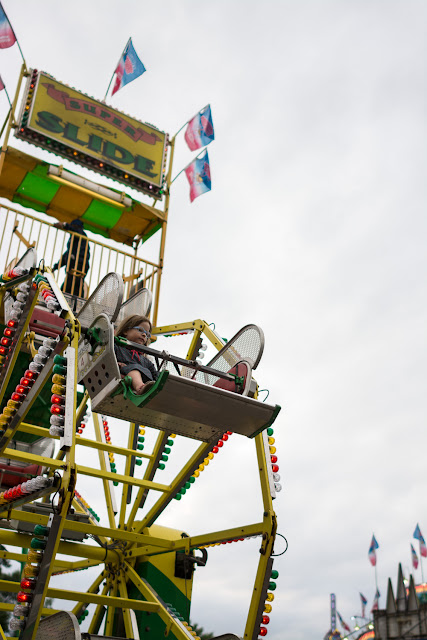 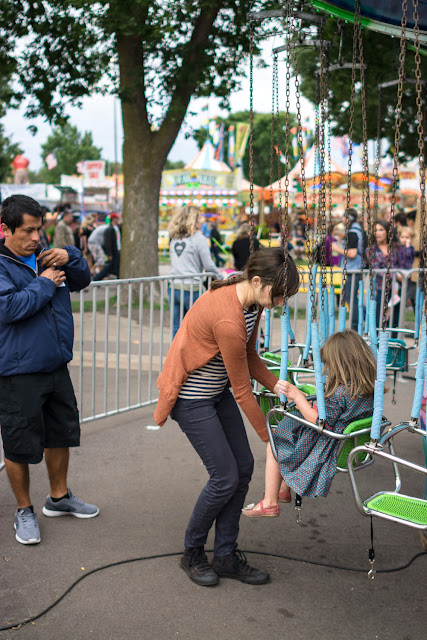 She also wanted to go on the little kids swings. So, we caved in. 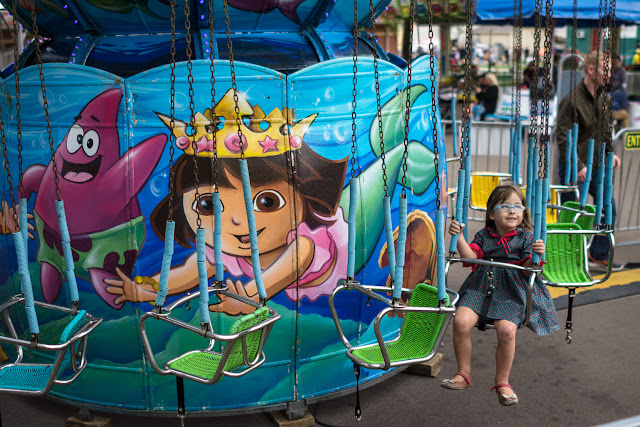 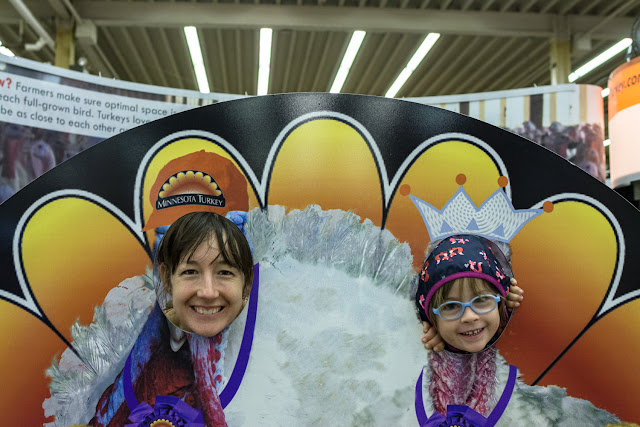 Inside the dairy building we discovered the cheap ice cream that's made from local cows. Next time.

We had already spent too much money throughout the day. One reason I prefer county fairs is the free admission.

Passing by the turkey cutout Meadow insisted on another photo op. 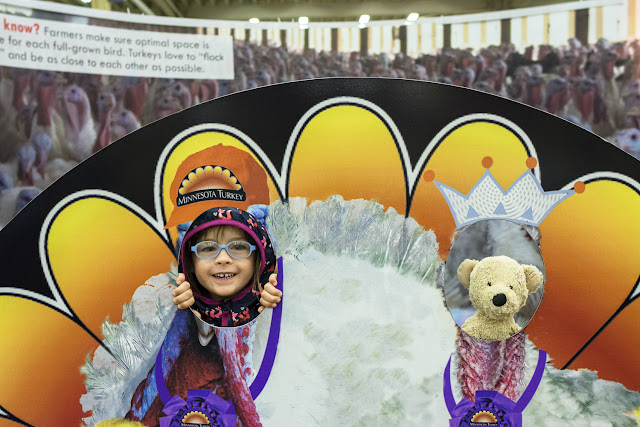 Don't forget one with Teddy. 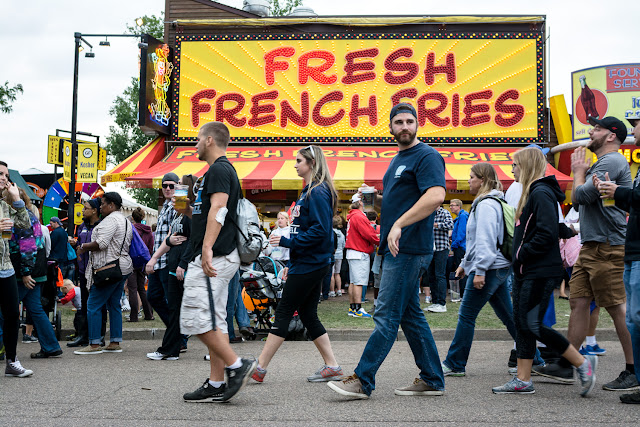 We were about to head home, but wanted to get to the Miracle of Birth Center.  First we had to get through crowds. 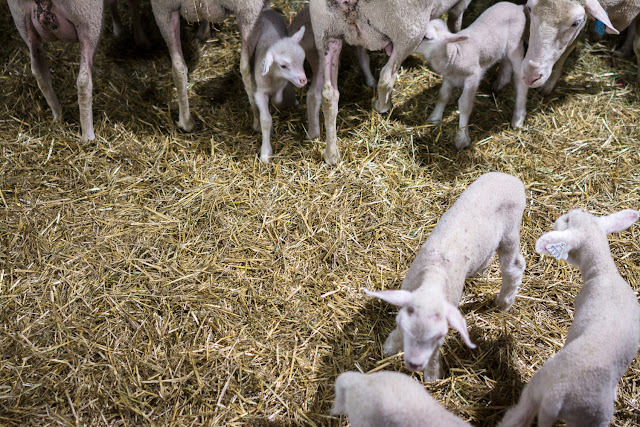 Then we made it to the Miracle of Birth building. So many adorable baby animals. 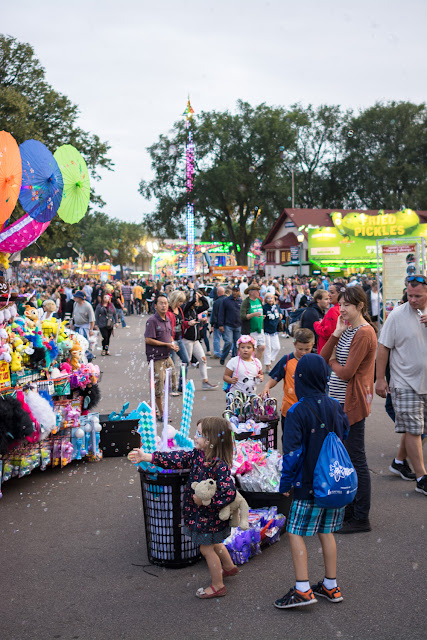 Scott and I had stopped going to the fair because we would always get bored after awhile and spend too much money. Having Meadow along was way more fun.

We probably spent even more money, but it was a good time with the little gal.

We could have stayed longer, we still didn't see everything. We were getting hungry and didn't want to spend any more money. We'll come back again, in four years.

By Scottie and Brooke Tuska October 14, 2011
Brooke and I aren't traditionalists. We didn't want to sit through a half-hour ceremony, but we also didn't think eloping was the answer. One thing that we did do was spend the night before the wedding in separate houses.   Even though Scott came with me to pick out my dress I still didn't want him to see me before the wedding. I had to keep one tradition. I woke up early to meet Brooke's dad at the Theodore Wirth Picnic Pavilion, only to find out that he was meeting me a couple hours later. I ended up getting most of the decorations over to the venue with my dad, sister and Dennis.  Scott had texted me in the morning, "I'm supposed to merry your dad right now right?". I was like, merry my dad? What he meant to type, but autocorrect corrected for him was meet.  Since Brooke came over to the venue to help, I spent most of the rest of the day with Blake, Colin and Olger. We ate some Pair of Dice Pizza and
4 comments
Read more