It's was my birthday weekend and we had plans to head up to Duluth for some last winter fun. Our plans changed when my Grandma became suddenly ill and passed away. Friday afternoon we headed for Little Chute. 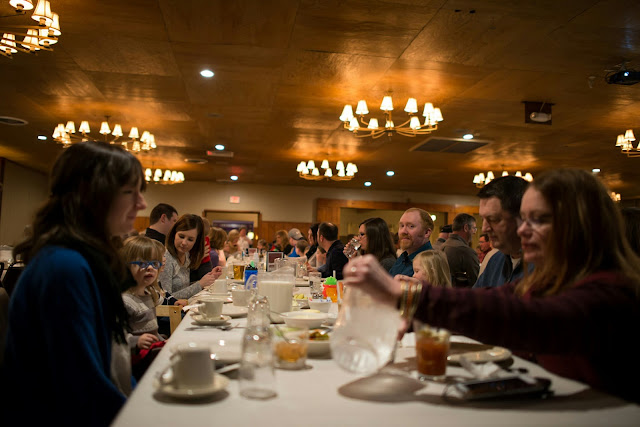 We made it just in time before dinner. All of my aunts and uncles and most of my cousins met for Friday Fish Fry at Van Abel's, the supper club where my grandparents had their wedding reception. On the way there my dad told us a story of how when my Great Grandpa was a teenager he would hang out in the parking lot with his friends drinking moonshine while his parents were inside. 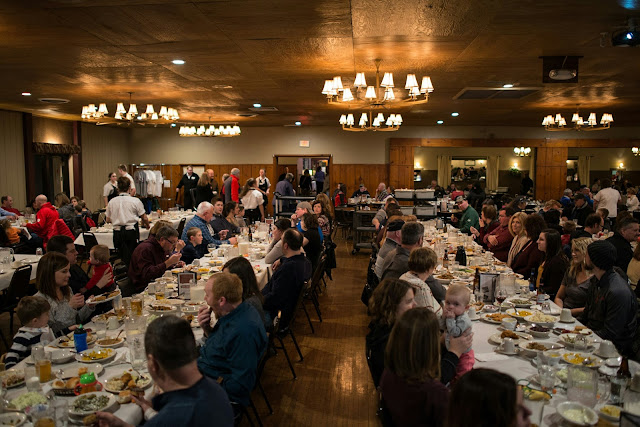 It's always crazy seeing how big the Romenesko clan is.

Yea my family is awesome. 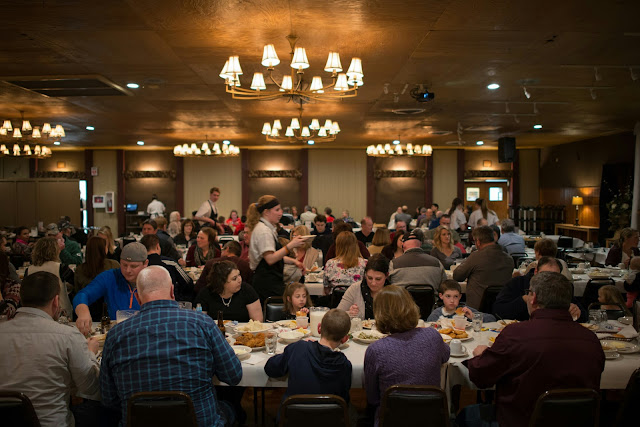 We thought it was just going to be a fish fry with the standard fair. Instead there was a little bit of everything from fried chicken to Thanksgiving fixings. There was even a plate of desserts.

Everything was family style and all-you-can-eat.

Mama Gail asked me to take a picture of the bar during dinner.

Apparently it's original, but hard to tell. 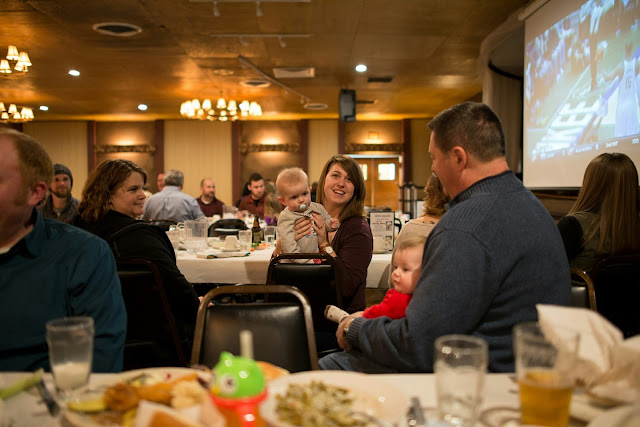 It was fun to see all the new babies we missed at Christmas.

After dinner some of the cousins headed to the bowling alley-turned-game room.

We didn't have any change and quickly realized Brooke had forget her wallet in Minnesota.

Meadow needs to work on her game. 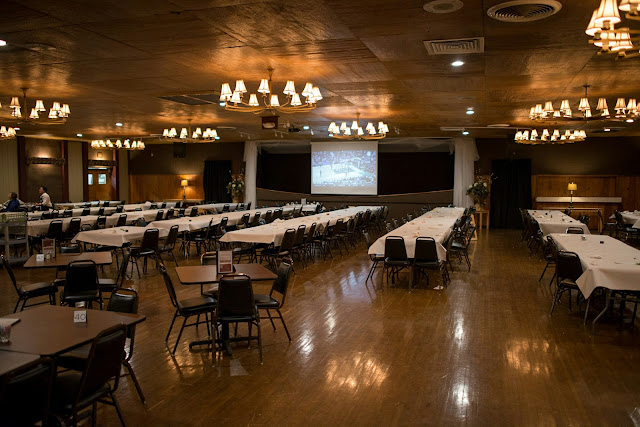 Some parts of this place were original while others were clearly "updates".

The plywood ceiling goes way back according to Mr. Mike.

More snow came overnight. It's a winter wonderland here compared to back in Minneapolis. Meadow and her Grandpa played outside making a snowman.

While Mr. Mike was watching Meadow he tapped on Meadow's diaper. He was having issues with the velcro.

Even though I was celebrating my birthday here, Scott still whipped up my requested cake.

Around dinnertime Blake showed up. After what felt like a wasted day I said we should go bowling at Village Lanes. Scott, Blake and I walked over and met my dad there. My dad was bringing his own ball and didn't want to walk with it.

When we entered the bartender told us they were closing. We all must have looked heartbroken. He decided to let us play a few rounds.

We enjoyed a couple of pitchers of beer while bowling in solitude.

It was kind of amazing having the whole place to ourselves.

I couldn't believe no one else was here on a Saturday.

Scott was actually beating us at times, we weren't too thrilled.

At times? Don't you mean two out of three games?

My dad was always double our score.

One game I was actually briefly ahead of Mr. Mike.

Soon enough he was whipping my butt.

Blake ended up getting close to me the second game.

I tend to get worse over the night. I wasn't surprised that both Brooke and Blake beat me the last game.

It was our goal for the night.

Mike spotted another claw game while we were leaving.

The city has plans to knock down our family's church to build condos.

No they don't. I made that up. Haha. They were going to sell the church to the city for a new library, but somehow that fell through. The church decided to sell the building anyways.

My dad wanted us to all go to church together as it may be the last time. I swear I heard condos were being built.

After the service we walked around to take photos.

I had never seen this entrance in all the years we've come here.

It's sad that buildings like this are knocked down for ugly metal paneled overpriced condos.

We don't know that it's going to be a condo, but it is in a really good location near downtown Appleton.

We walked down to the Sunday school hallway where we reminisced.

Believe it or not I taught Sunday School when I was a teenager and this was my classroom.

Once a month they have a pancake breakfast after the service. We lucked out today.

It's not only for parishioners, but also for the community.

After breakfast Gail told me to photograph this wicked mural-hallway.

Even though we saw all the rooms already my mom had to look too.

Maybe another church will take over or we could open a music venue...

When we got home I finished topping Brooke's epic peanut butter-peanut butter cup-Oreo cheesecake. We wanted to eat right then, but we had to wait for Brooke's sisters.

Blake made us all his homemade Bloody Mary's in the meantime.

Meanwhile, Meadow played in the yard.

We drove to Appleton for a hike near the river. While driving there we checked this jerk's home who keeps on buying out old homes and buildings in Little Chute, just to tear them down. Rumor has it his reasoning is so he has a "rural" drive home. I yelled something about stopping that at his property. I know, I'm weird.

I just shook my fist.

Meadow didn't want to come along with Scott, Blake and I for a hike. I'm finally dragging Scott to all the places I had been meaning to take him. This time we brought him to the creepy forest by Peabody Park.

They didn't tell me what was so strange. So, I kept on guessing. I was creeped out by this strange water plant, but it wasn't the reason we came here.

It's the evil egg plant.

I came here a lot when I was in high school.

That seems so obvious.

I remember the first time I saw these (I'd call them grottos) scattered around the woods and I had no idea what they were. I later found out from my dad that they were used to house Saint statues for the nearby monks's to pray to.

Brooke, Catholics don't pray to the statues; they pray near the shrines that are dedicated to the saints.

We had been watching a show about men who live in the woods. Blake wanted to try it out.

It looks like the monastery is still there. I wonder why they abandoned their shrines. I guess I could Google it.

Actually now its a music venue/space.

To make the place even stranger it's just below a huge cemetery.

We didn't see any much this time, but some gravestones can be found broken along the river.

There are lots of theories as to whats in that hole that was covered.

Then we brought Scott over to see the witch.

Turns out it was just a grave of some rich lady.

Whose name is Kate M Blood.

This weekend had worn me out apparently. After we returned I took a nap before my birthday dinner.

Meadow got some skateboard-scootering in before we went out.

Since my birthday was actually the day of the funeral we celebrated the day before. We met Chelsea and her family at Appleton Beer Factory. I had been wanting to check it out. Unfortunately a few of my friends and Brittany couldn't make it due to being sick.

I also love that everyone is watching me eat.

I talked Blake into sharing a poutine with me. My reuben had smoked corned beef and the poutine had fried cheese curds, which through me for a loop.

I got the Hangover Burger. It was delicious.

I had to hold Harvey Danger too.

Someone wants a baby.

I want another child, not a baby.

I'll let you figure out what this is.

My dad remembered this place as an auto parts store that was full of stuff.

It was a good story. I promise.

Afterwards we headed back home for cake. This year I requested a Reese's Peanut Butter Cheesecake and it was awesome!

We went from snowstorm to 50 degrees while we were here. And I can still use a pogo stick with no hands.

Meadow is not quite at that level of pogo expertise.

We had plans to walk along the Fox River and of course when we arrived at Doyle Park Meadow wanted to play on the playground. I thought I would join her by seeing if I could go through every obstacle without touching the ground.

It was a little tough at times, but Blake and I did it.

I watched in anticipation of someone ripping their jeans. Unfortunately it never happened.

When we started hiking we first needed to find away across the canal.

I hate crossing water with my camera. I handed it to Brooke. Yes, I do exist and I'm balder than an eagle.

We walked by this house initially, but had to backtrack and cross at the creek.

We were all over dressed for the day.

We walked all the way down to Heesakker Park and walked back to our car.

On Tuesday morning we packed up after breakfast to see my other grandma in Redgranite on our way home.

Now that she is my only surviving grandparent and Meadow's only great grandparent left, I want to make sure we see her as much as we can.

She's our only surviving grandparent on either side. We always love seeing her.

We shared my birthday cake before heading back on the road.

After leaving Redgranite we ate at El Popo in neighboring Wautoma.

So good, so cheap. 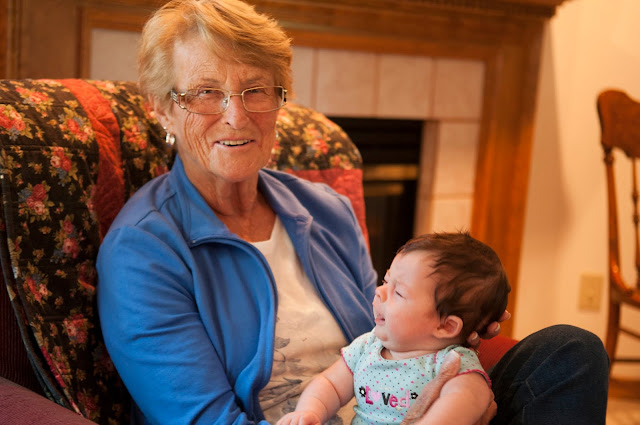