Scott's 30th Birthday...Or a Bunch of Sick Cousins at the Cottage 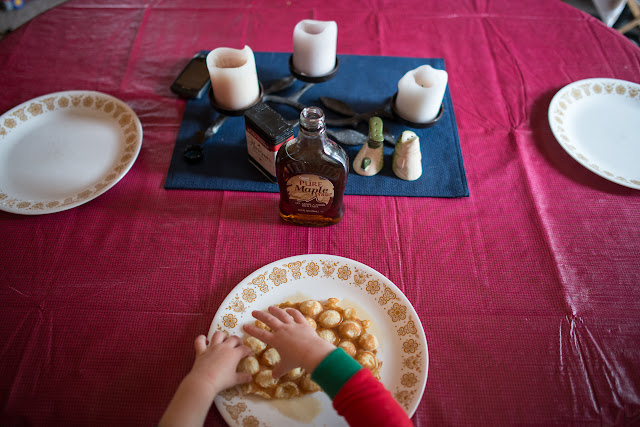 Once again, I decided that we'd go to the cottage for my birthday. A few more days and I'd be turning 30.

We arrived the night before everyone else. This time we waited to turn on the kitchen sink. We also picked up some groceries on our way so we would have breakfast in the morning.

Waffles is kind of our go-to first-morning-at-the-cottage breakfast.

Meadow brought her monkey and mini-Ergo with her down to the lake.

You could still see where our ice rink was, but a lot of snow had blown over.

After some shoveling we had created a small hill for Meadow to climb.

She quickly moved on to other things.

It was much harder to shovel this time. The new snow had frozen to the ice.

We left the lake in hopes of my dad being able to shovel off the snow with his Bobcat later.

We went in for a boxed mac and cheese lunch. Annie's, not Kraft.

After we warmed up, we headed back out to snowshoe. Meadow was a champ at first then wanted to go ice skating instead.

I guess she'd rather shovel.

We didn't get all that far.

After watching us, she changed her mind and decided she wanted to try snowshoeing again.

She does great, but doesn't quite understand it yet. I'm sure next year will be better.

Her legs are just too small. I think it'll be closer to two years from now that she'll get a hang of the snowshoes.

While making spaghetti and meatballs we got a call from Brooke's sisters and dad. They weren't going to be eating with us. We still went to the grocery store in Three Lakes for the rest of our cake ingredients and few other things.

Initially it was supposed to be Brittany, Marina, Morgan and my dad coming. At some point Chelsea decided to go instead of Morgan. Meadow was excited to have cousins to play with.

Chelsea and Brittany chose Taco Bell over my famous meatballs.

The top bunk became the hot spot the whole weekend. Meadow decided this was her bed from now on and kept sneaking up there to sleep after we put her to bed.

While I slept in everyone else chowed down some french toast. Apparently the kids had all been really loud over night. Who knew?

It turns out Harvey was having trouble breathing over night. Chelsea and my dad took him to urgent care after breakfast. The poor little guy had croup.

Pineapple and banana just sound good in the dead of winter.

It was much warmer and the sun was even shining on Saturday.

We brought out the famous kites.

Something about blue skies, a frozen lake and kite flying just go together.

The toddlers were loving them.

Marina was demonstrating the motion that the kites make. I wish I had a video.

Everybody got a turn. 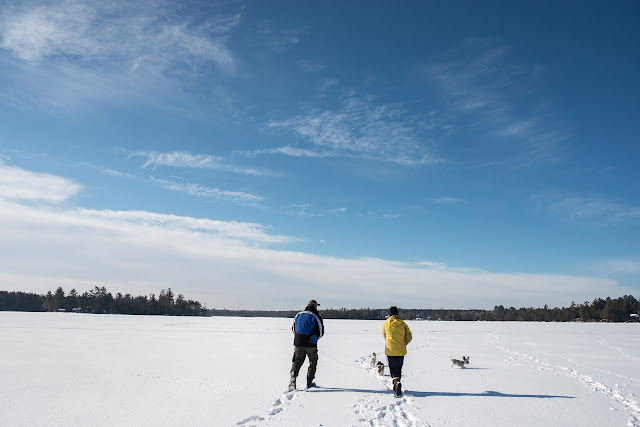 Some lake hikers came over to see what we were up to. They were at their in-laws cottage for the weekend just like us. They thought that the cousins were triplets, which was kind of funny.

Then the toddlers tried to make snow angels.

I started to clear the lake some more.

We were determined to get the snow off the ice.

There were so many snowmobilers out on the lakes today. We decided to take the kids down to watch. Meadow hitched a ride with Nolan. 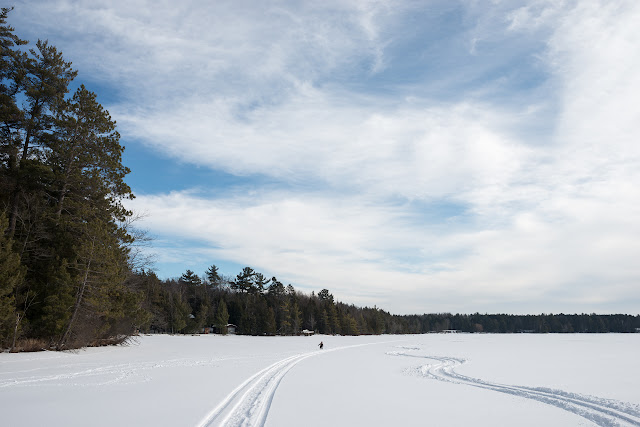 She got left behind somehow and walked with me. Eventually she fell behind again.

Meadow finally made it back to her crew.

We really should have brought a bigger sled so all the kids could ride together.

Eh. You've got to make them blaze their own trail.

While everyone napped I finished frosting Scott's cake.

Then I cleared the snow off my ice lanterns.

Mr. Mike didn't think a bobcat would be a good idea on the ice. Instead he got his old snowblower up and running.

Clearing the rink suddenly became much, much easier.

There was still a top layer of snow on the ice after Scott finished.

Mr. Mike was the first to try the ice out. It wasn't quite as icy as last time.

I thought he was exaggerating, but all the work had been for nothing. 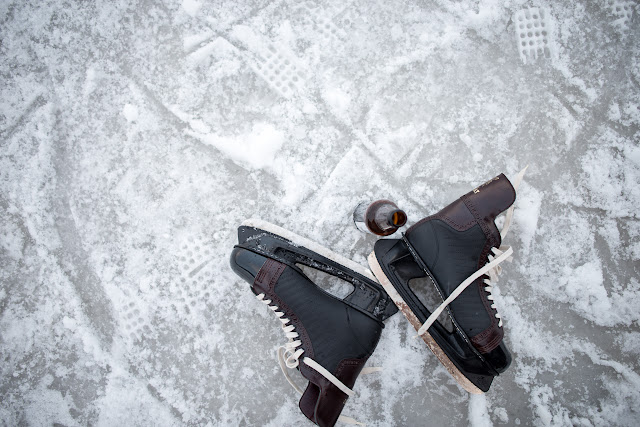 Instead I drank ice cold beer. Get it? Ice, cold, beer.

Eventually everyone woke up from their naps.

I built a fort for the rascals.

We had double decker tacos for dinner. Oh, yea.

I worked on making eggs for Meadow's kitchen.

Meanwhile the Farbers and Gostishas opened their second Christmas presents a month late.

Apparently there was a dance party upstairs.

A box spring-bounce off, to be more precise.

We got all the kids to come back down stairs with the promise of cake.

Then it was time for the birthday boy to blow out his candle.

I was about to blow out the candle, but I wanted to make sure Brooke had the focus set. It's a thing I do. She hates it. I can't blame her. 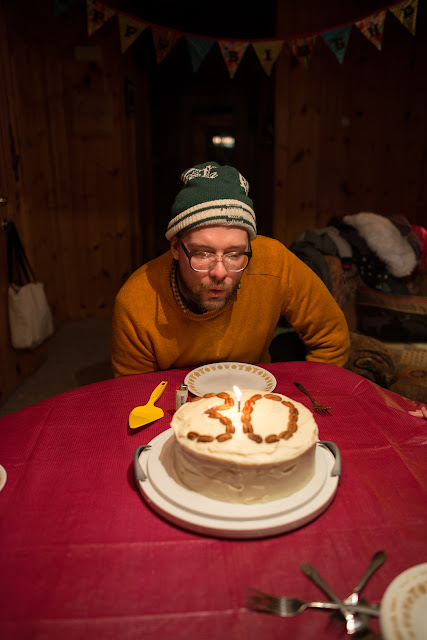 Once I was certain she had the shot, I blew that baby out.

While making his cake I thought it was really strange. The recipe didn't include butter and you mix the whole thing by hand. It turned out to be pretty good, especially with that cream cheese frosting.

It was still really balmy outside, so, we decided to play at night after cake.

My dad built Meadow an ice skating trainer. Meadow's feet are so tiny she's going to be on double blades for a few more years.

Meadow and Nolan went for a night ride with grandpa after ice skating. They were clearly pleased.

My sister and I then built a snowman. Poor Scott had never made a snowman before.

I'm sure I have, but you have to remember I was the youngest. I never did these things once my older siblings got bored of these things.

Ahem. That's Liberty Bell to you.

After everyone else went to bed Scott, my dad and I went to the local bar for a couple of brewskis.

It was my birthday eve. It just seemed like the right thing to do.

The next morning I got up before everyone. It turns out Marina was up all night with a stomach flu. After a while I went to check on Meadow and she was sleeping in puke. Yuck.

Eggs didn't sound so good with a house full of sick kiddos. I had to make my omelet, since I like to put the filling in the middle and not on top.

Unlike Marina, Meadow felt well enough to eat something and play outside.

My dad took us for a couple spins on the snowmobile.

I whined until I got to go for a ride.

Nolan and I shared the sled. 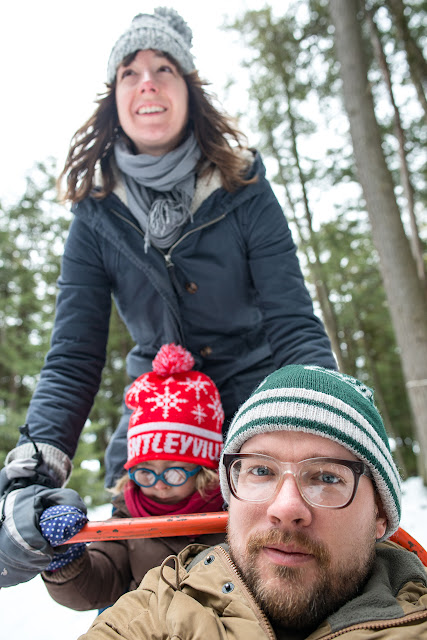 Meadow got to ride on back this time.

Nolan helped my dad bring more logs over to the fire after the ride.

The kids noticed the deer had ate the corn overnight.

I probably told them something about how watching the trough isn't going to bring the deer back.

Then they called for the deer to come back. 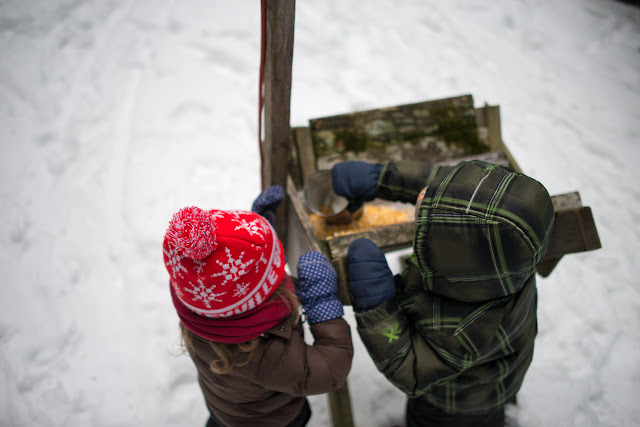 They set the bait. It only seemed logical. 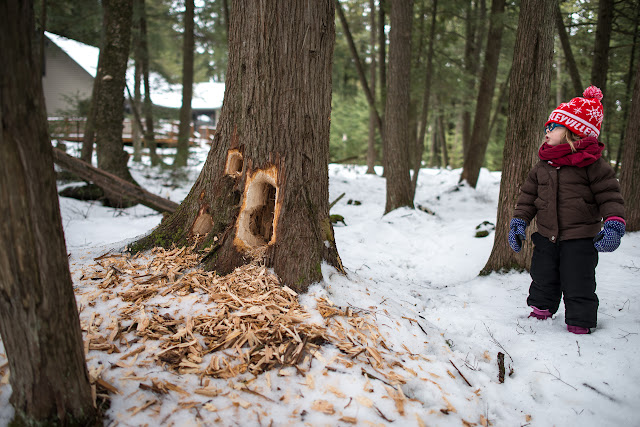 Eventually we found something completely different. Mr. Mike thinks this was the work of woodchuck or some other wily creature.

The ice had frozen better overnight making it easier to skate.

The little dudes got in some skating before we had to leave.

Nolan was a natural at skating.

Harvey wanted to see what the commotion was about.

It's good to get fresh air when you have croup.

He was doing great after being sick Friday night and much of Saturday.

Too bad we had to leave in a few hours.

I think we should take the whole winter off one year. It's slow season for my photography business anyways.

Things were looking up after a weekend of sick kids mixed with outdoor adventures.

Halfway home Meadow threw up all over herself. I really wish she would tell us when she doesn't feel good.

And that's how the strangest birthday weekend ever ended.