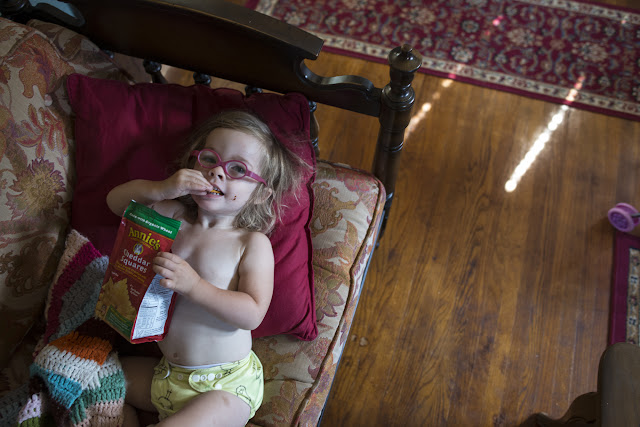 My parents always like coming up for the Aquatennial Fireworks. I assumed they wouldn't this year since they already came up in May. My mom had the weekend off and came up anyway. My dad had to work so she brought my sister Brittany and our niece Marina.

When they arrived they were just in time for Grandma Lungwitz's famed Rhubarb Pie. The recipe that is. Brooke baked it of course.

My mom kept commenting on how Meadow needed a bath. Okay, okay we will give her a bath. We thought she would have more fun if Marina took one with her. At first neither of the girls wanted to go in then they had a blast.

I helped curate a photography retrospective for this year's FLOW Northside Art Crawl. I thought I'd take Gail and the crew. Marina and Brittany decided to nap instead.

We decided to walk down Broadway stopping along the way, then take the bus back later.

The block that got wiped out from the tornado back in 2011 is finally getting a new apartment building with some retail. Here's hoping that we get a new restaurant nearby.

MCAD was coordinating the painting of a new mural. Some volunteers asked if we wanted to paint, but we all weren't dressed for that.

I never wear Meadow in the front anymore. I thought I would this time. She looks so big.

It's an optical illusion. You're just small.

This colonial flag made of  wood pallets was quite crazy.

We ran into another mural that was recently completed. The artist, Patrick Ginter, showed us some of his work and details on the mural that you can't see driving by.

Driving by I didn't really like it, but once I got to see it up close and see all the details it was actually really beautiful.

Since I took some photos of him he shared a print with us. Nice guy.

Having my parasol really helped block out the sun. I've had this for probably 10 years and never really used it.

What Brooke was trying to get at is that it was wicked hot outside.

Someday she'll be able to take classes at JXTA.

I wanted one of these 10 year Flow/20 year JXTA anniversary shirts. Only for the volunteers unfortunately.

We then went upstairs into the JXTA Co-op Artist Studios.

I showed some of my work a few years back in this part of the JXTA campus.

We got to see one of the dance schools do so some rehearsing. My mom really liked this girls dress.

At the neighborhing screen printing space that JXTA has. I picked up a cool summer themed t-shirt. I'm sure you'll see it in a future post.

They were doing puppet shows at the Cookie Cart. I thought they would have been live, but it was just a video. The kids made the puppets themselves so it was cool to at least see them.

Meadow wasn't so sure what it was.

I was excited to see that the old public library was open today. This is one of the oldest libraries in the city. Sadly it's not used as a library anymore. It predates the 1890's and was recently renovated as a technology and job help center.

There was a classroom with props for a photo booth. Meadow was excited to try on every hat. 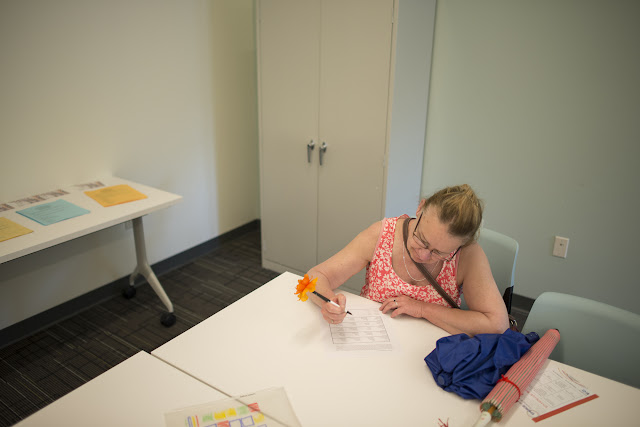 The top floor was originally used as the Children's Reading Room. I'm glad some of the old parts of the building are still visible.

I ran into northside photographer and good guy Bill Cottman when we left.

Had we not had icee's and cookies we would have gotten ice cream too.

It was getting late and Meadow needed to nap. Plus Brittany and Marina were by themselves at our house all day. Scott ventured out to FLOW again on his way to get groceries.

I was the only person who biked to Cub on this day. That always makes me depressed, but I guess grocery shopping isn't easily accomplished via bike.

On the way back I realized that the music stage was at the North High football field and not North Commons. I stopped by and chatted with some FLOW folks.

When I got back Meadow was only in her diaper.

We have been so spoiled with all our guests this summer.

Since I took GG to the liquor store she bought us some beer.

We had summer squash and zucchini blossom quesadillas for dinner.

I think we've already lost a bag of sand to the ground this year.

We then headed to our usual spot for the fireworks on Nicollet Island. We weren't thinking and didn't bring our bug spray. The mosquitos were eating us alive.

I also always forget that the fireworks don't start until 10. Eventually Tyler and Emma met up with us to watch too. Meadow didn't like the fireworks. I don't think it's the noise that bothers her, just all the flashing lights.

I had to hold for her away from the fireworks for most of the show. Just like on the fourth she peeked at them near the end.

Next morning Meadow was excited to see her aunt and cousin again.

Marina kept asking for cake all weekend and Meadow always suggests pancakes for breakfast. So I made Chocolate Rye Pancakes for everyone.

GG didn't realize they were chocolate. I guess cocoa might a better way to describe them.

I took Marina and Meadow on little ride to the Fialas while the ladies walked over.

Our kids love their backyard. I do wish ours was a little bigger.

Meadow has never used pedals before. She didn't quite understand how the tricycle works.

Actually she used them at my parents house a few months back when my brother was in town.

A neighbor kid kept on spraying water over the fence. We all backed a few feet away.

Olive is such a show off.

After awhile my mom was anxious to get up to Duluth. Although we have had a lot of guests this summer their stays are always too short. We debated on following them up to Duluth, but decided to stay home for once. 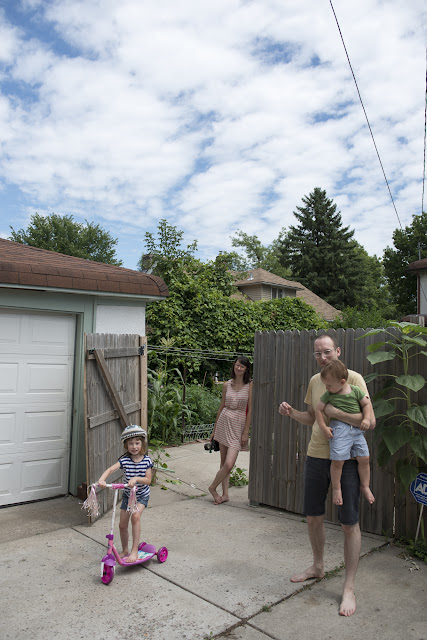