Up to Green Bay and down to Milwaukee 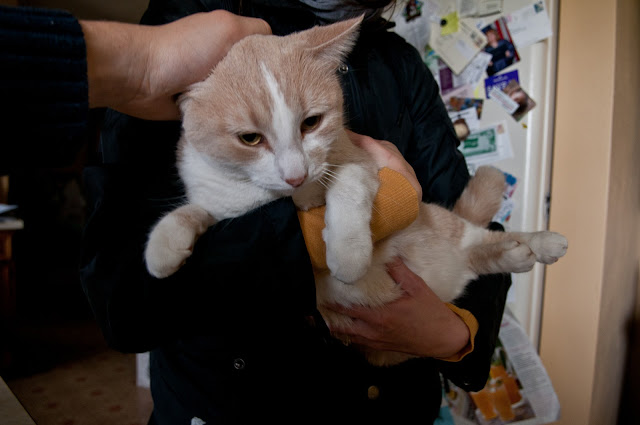 The next day Scott really wanted to go to Green Bay since he hadn't been there since he was 10. I warned him that there wasn't much to see, but he insisted.

Driving in, I could tell the place was kind of trashy. 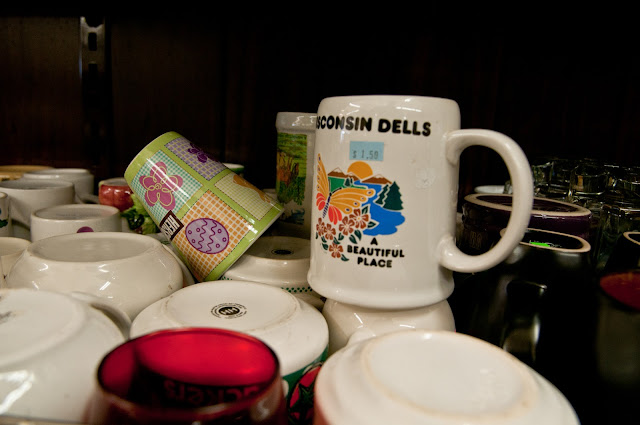 We saw a thrift store and decided to stop. Because it was Black Friday everything in the store was half off. 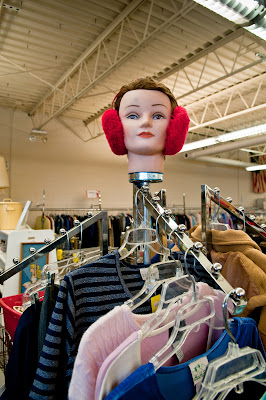 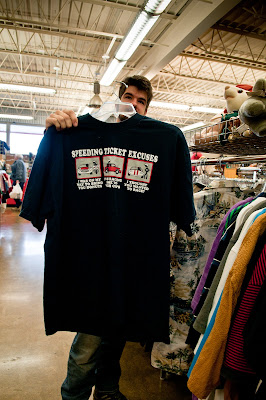 Blake found the perfect t-shirt for me, seeing as I had been pulled over the night before. 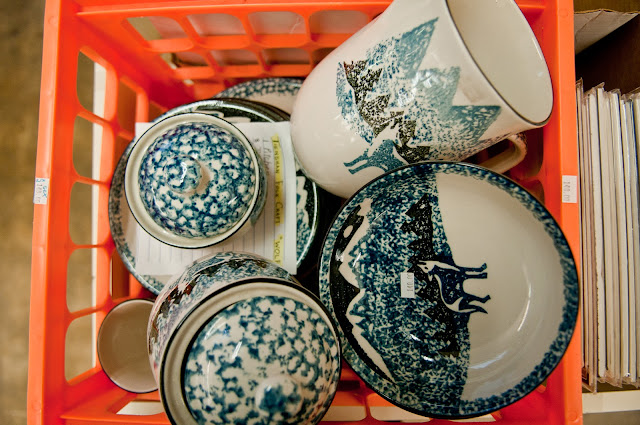 Although we didn't get these dishes we did find a vintage tree stand for only $1.50.

I so want these! 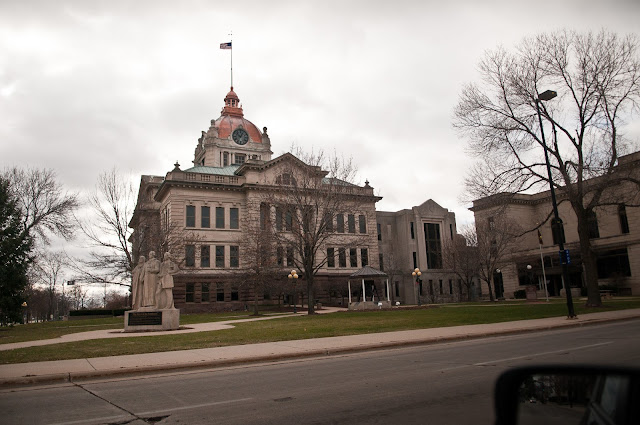 We drove all around Green Bay until there was nothing left to see. 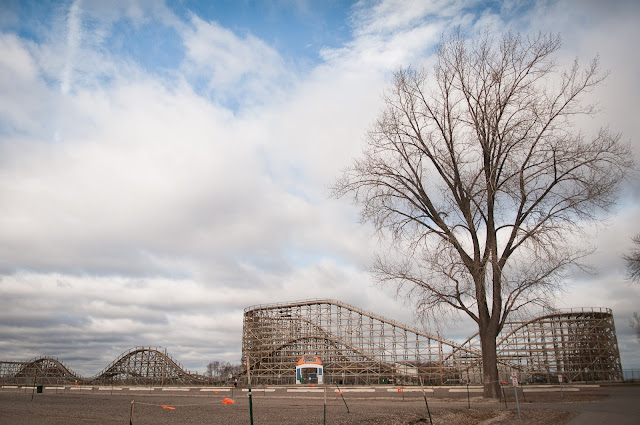 I haven't been to Bay Beach in years. It was weird to see what was once a picnic area now a giant parking lot and rollercoaster. Makes me want to come back next summer. 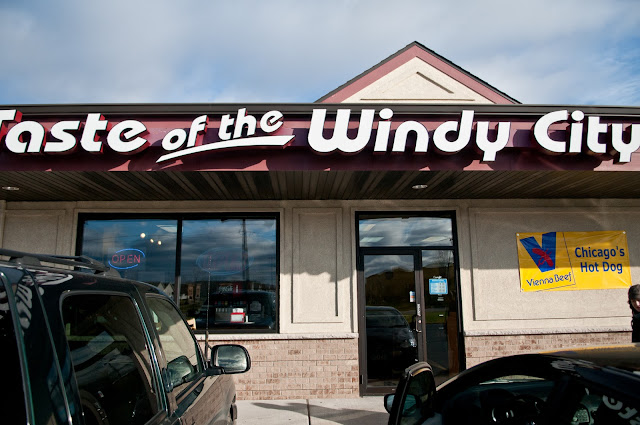 Scott had also been wanting to try Taste of the Windy City in Little Chute. 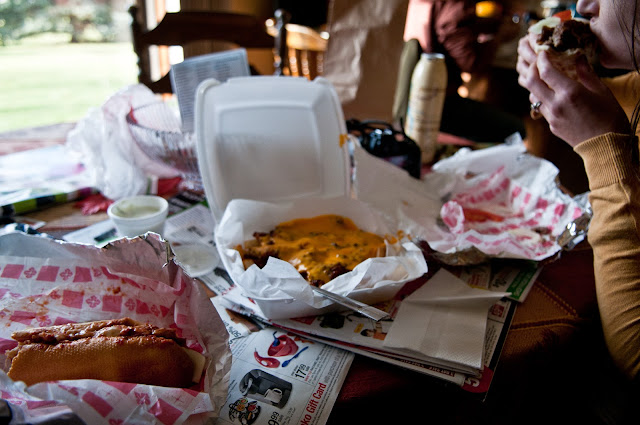 I think he now knows what we won't be doing when we come back again. 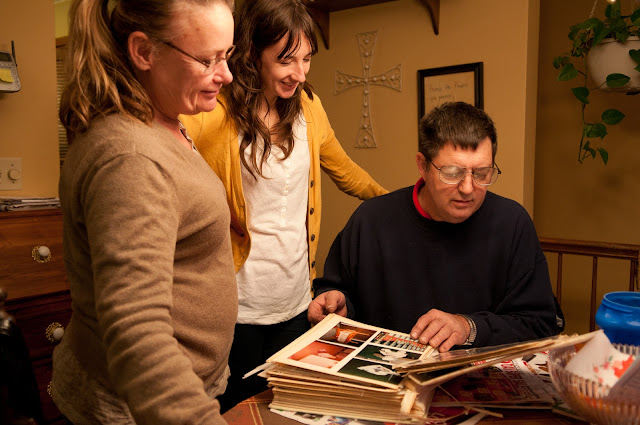 I found my baby album in the basement collecting dust. When my parents saw that I was taking it they were like, "No you can't take that there's too many memories." The book is in really bad shape so they agreed to let me have it, if I fixed it up.

Blake had left for Duluth in the afternoon and I think my parents didn't want to be alone again so they offered to take us out to eat.

What can I say? Sometimes I just want to eat.

After trying to make plans with Amanda and Jeff all day we decided we would have to wait until we were in town again. It was getting late and we had to drive down to Cudahy. Apparently Scott's parents weren't expecting us until Saturday so they didn't have our "room" set up.

The next day I wasn't feeling well and spent much of the day reading and sleeping on the couch. 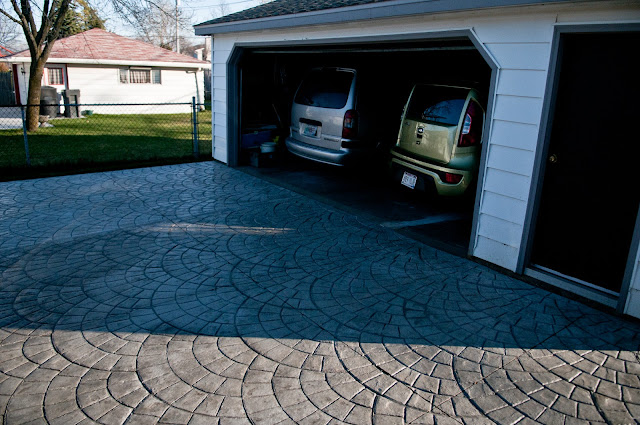 My parents got a new car (a Kia Soul) and a new drive way. Both are pretty absurd, but nice. 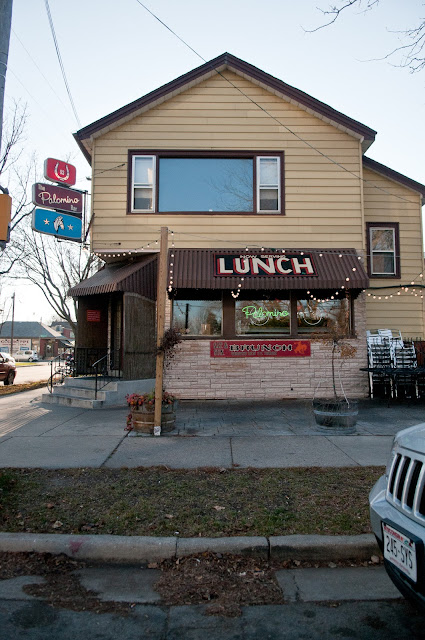 My pops and I decided to drive around Milwaukee and check out the oldest home in the city. First we meandered around Bay View to see if Mama DeMarini's had reopened. It had not. 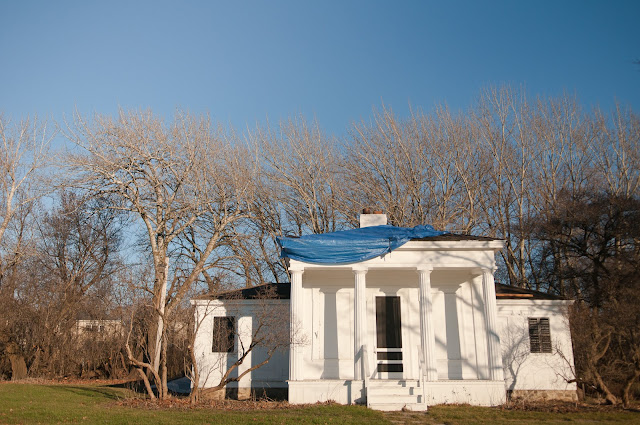 After driving along the lakeshore and through part of Shorewood, we ended up at Estabrook Park. The building was pretty small, but a well built structure. 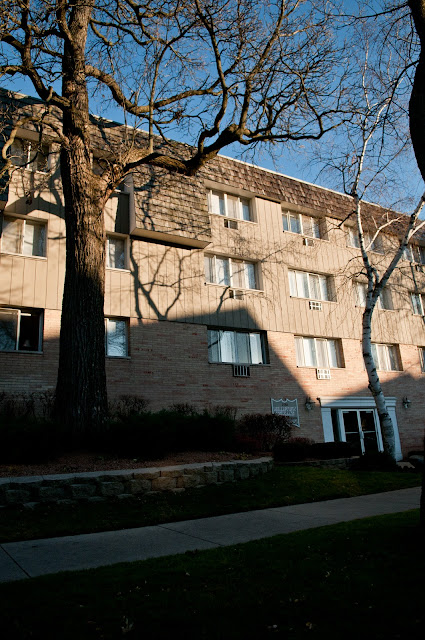 Heading back into the city we found my dad's twenty-something Eastside apartment. I wanted to see what progress has happened at the old Pabst Brewery site. After checking out the renovations we each got a beer at Best Place. 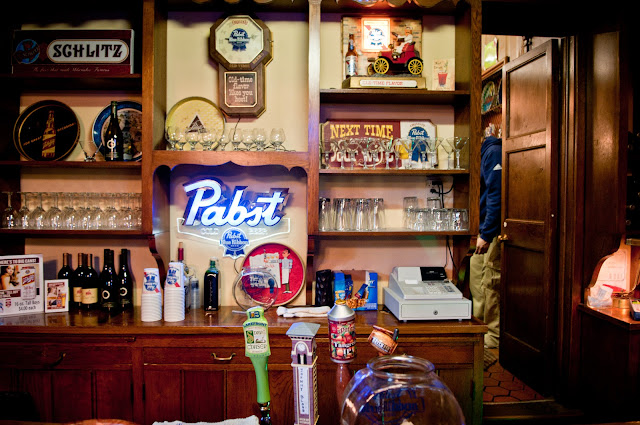 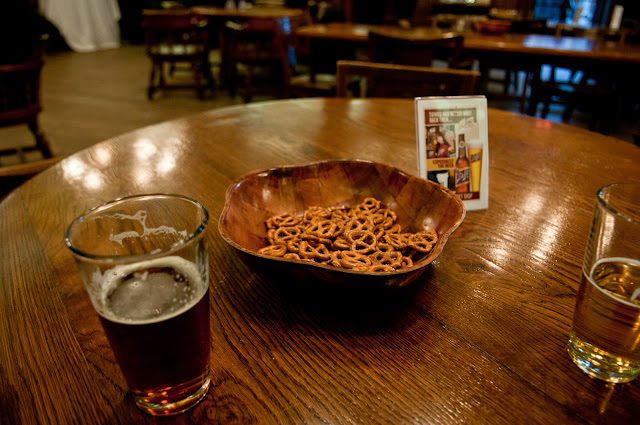 In the rathskeller we enjoyed our brewskies, watched Badgers football and snacked on pretzels. 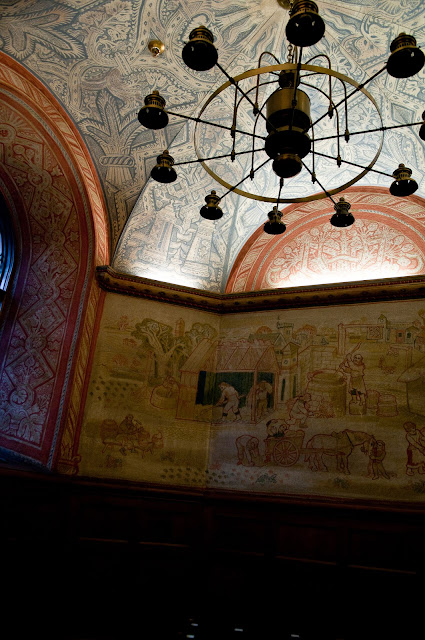 This would've been a great venue for a wedding.

We were supposed to do a Thanksgiving dinner with Scott's parents. While going over what we were going to make (his parents hadn't bought anything yet) we decided none of us really wanted to cook. So, out to eat it was. His mom chose Two Brothers.

It's Three Brothers, Brooke. Anyways we ate there and it was really good. Funny enough, my friends Krystal and Jeremy, whose wedding I photographed, showed up with their rents and sat right next us. It's always nice to see old friends. 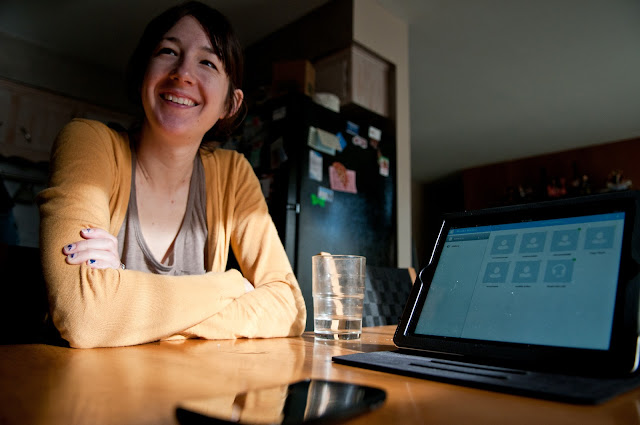 The next morning Katrina called to say she wanted to Skype with us. 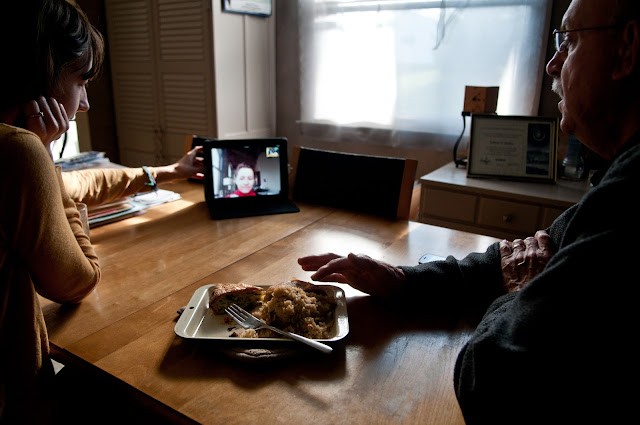 So, that's what we did. I ate leftovers from Three Brothers and we chatted away. 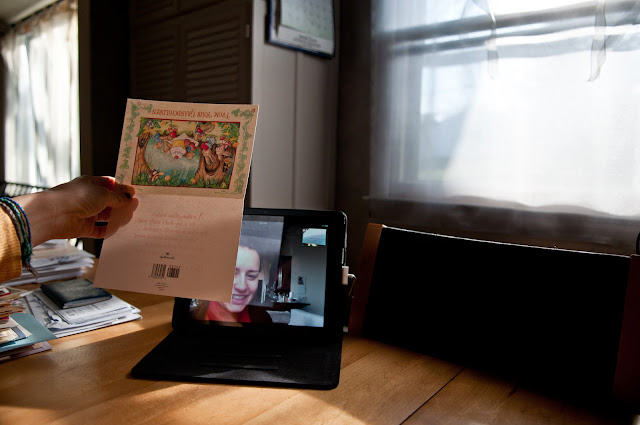 Scott's dad wanted to show her a bunch of old cards they found at their Grandma's house. 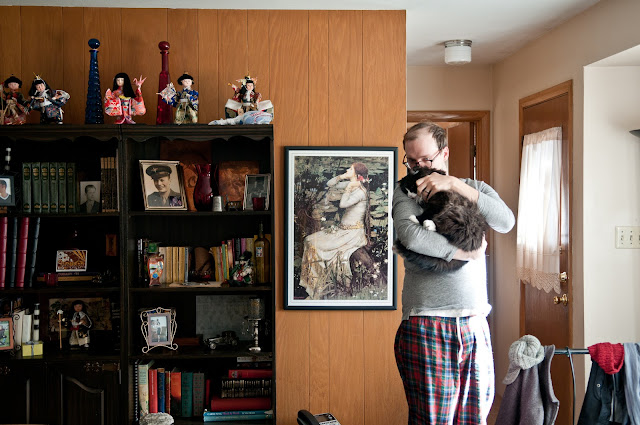 I abducted BooBoo Kitty to show Katie and then we said goodbye. 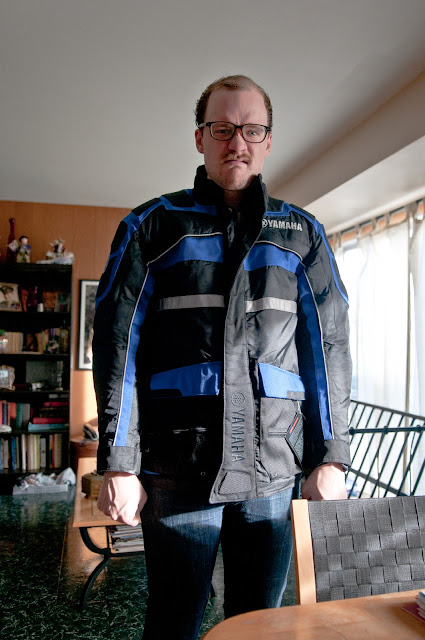 Scott's dad had a closet full of coats he kept trying to give away to Scott. I made him go with this one since it matches his snowboats.

I'm going to wear it when we go snowmobiling at the cottage. 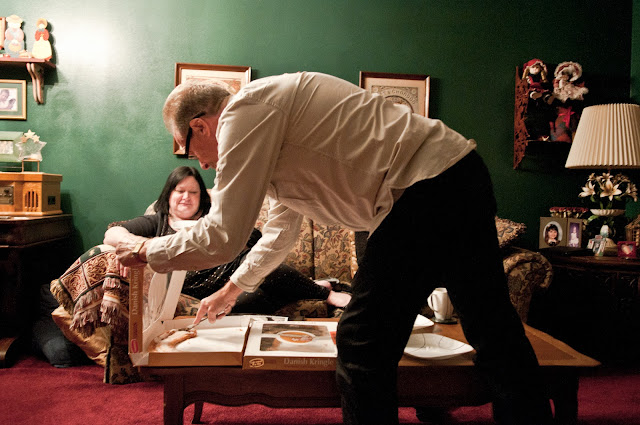 My aunt and uncle were in town and came over for some conversation and kringle. Uncle Don was really excited for authentic Racine kringle.

We had to get home, so we said our goodbyes and got back on the road. 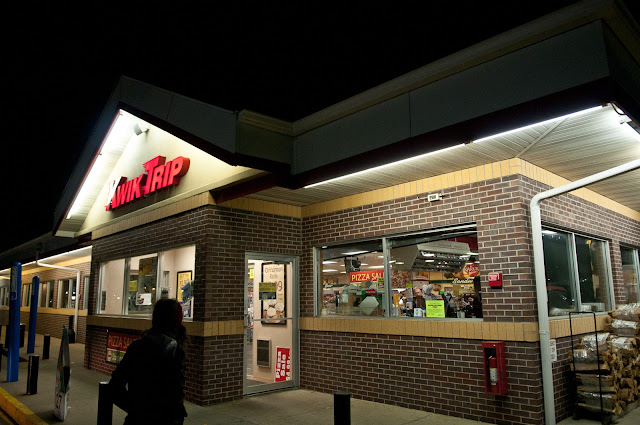 We didn't leave until 8:00. The drive back is around 6 hours. Even though we were both super tired all of the holiday traffic was home by then.