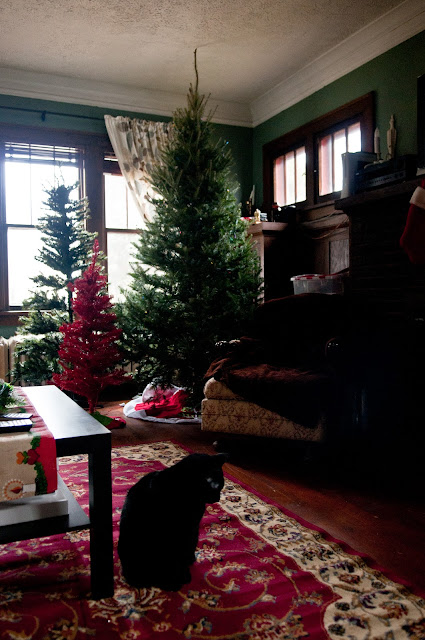 This year we got our first real tree. It took me awhile to convince Scott to go that route versus the fake tree. We still set up our other two trees so now we have a Christmas forest.

One for Brooke, one for me and one for Peanut.

Does Peanut look a little different and less cute to you? That's because when we were carrying in our tree the little punk escaped. When I was leaving for work I noticed him sitting on top of our neighbors garage. When we went over to get him we noticed he had chased another cat up a tree. Apparently Peanut is afraid of heights because he wouldn't go up the tree (thankfully). At somepoint during the chase he lost his handkerchief collar. 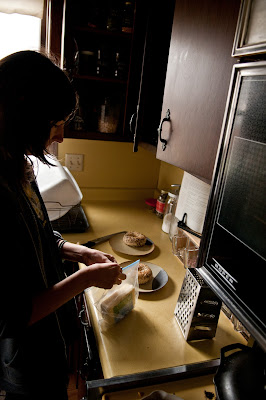 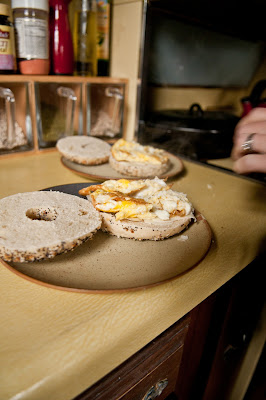 I actually made breakfast today. Egg and cheese sandwiches. 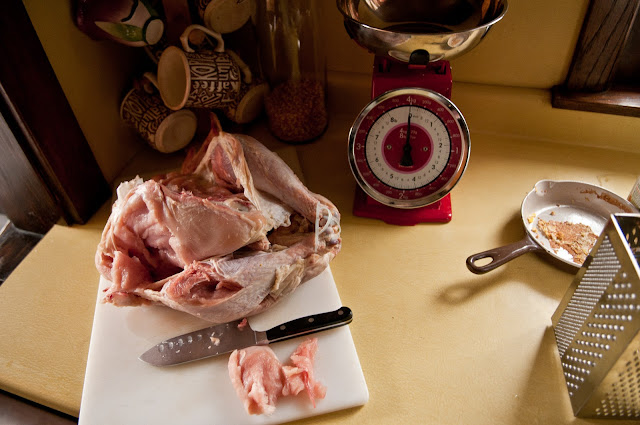 I spent way too much of this time butchering a turkey and turning it into...well, you'll see. 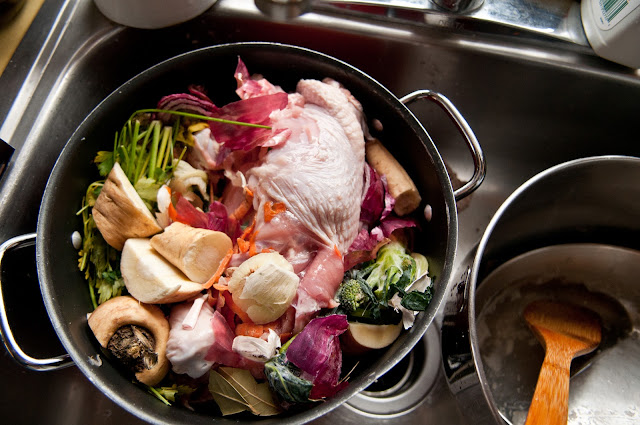 After separating all the easily accesible meat from the bird, I made a turkey stock. 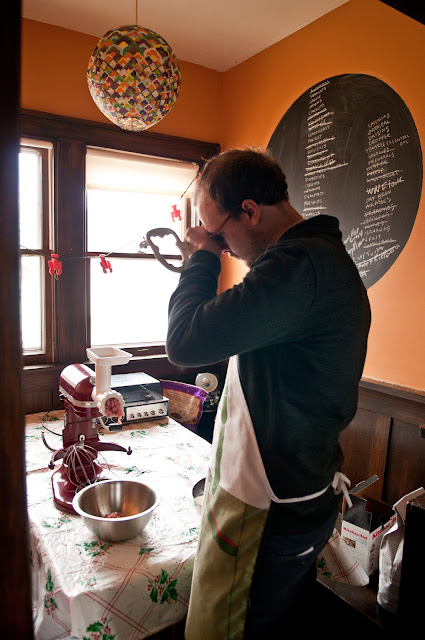 Scott was busy in the kitchen all day while I did laundry.

I made the meat into ground turkey. 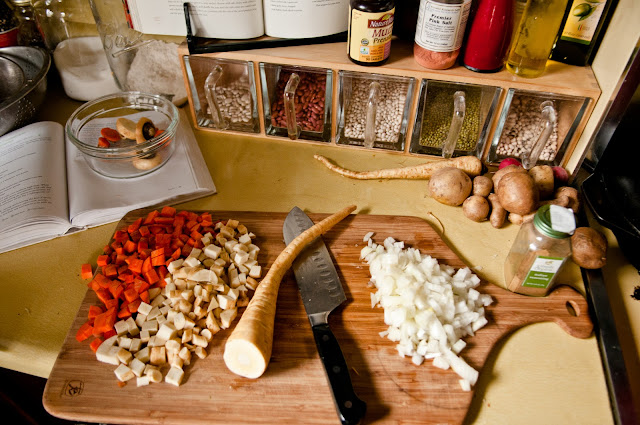 I then chopped veggies for a white chili. 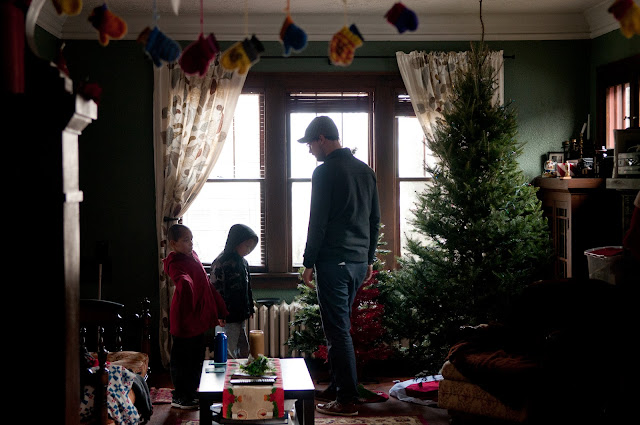 We had to run to the grocery store to pick up some things. Pulling into our driveway we spotted the neighbor kids. Scott insisted they come inside to see our Christmas decorations. 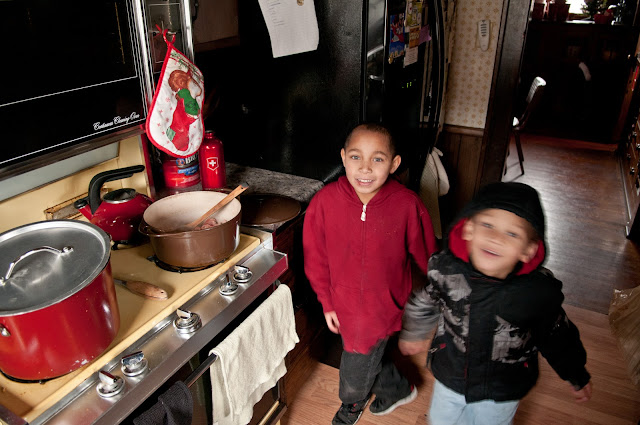 They weren't impressed, but were fun to hang with. 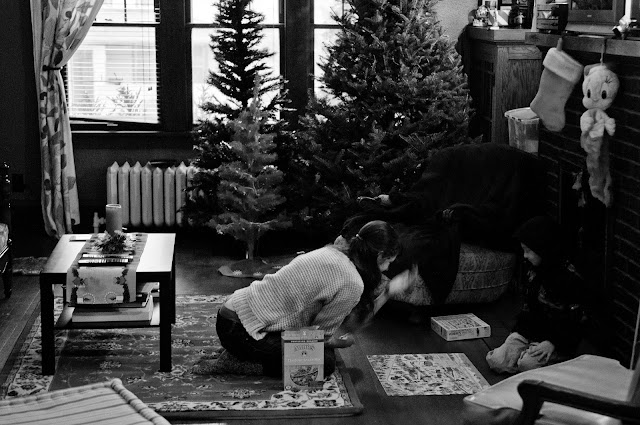 They tried playing with my super hard puzzle that I've been "working" on for almost a year. Then I suggested we try an easier puzzle. Scott's old Where's Waldo floor puzzle. We played "Can you find...?" until they got bored and left. 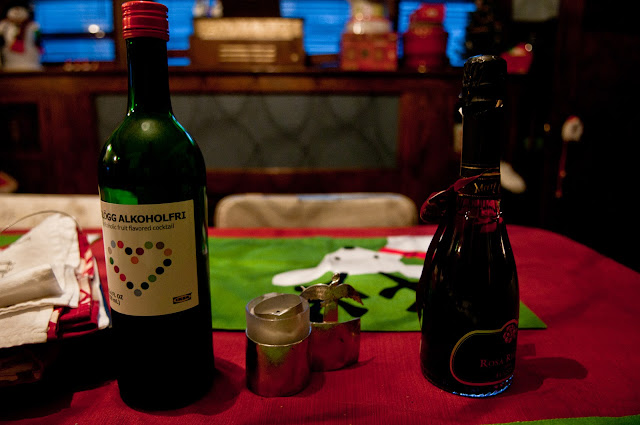 Soon after they left Tyler, Emma and Olive came over. We were originally going to continue with our Friendsgiving tradition and have it today. Scott and I weren't really in the mood for Thanksgiving food again and Emma had a few photo shoots throughout the day, so Scott offered to make dinner before heading out to the Holidazzle parade. 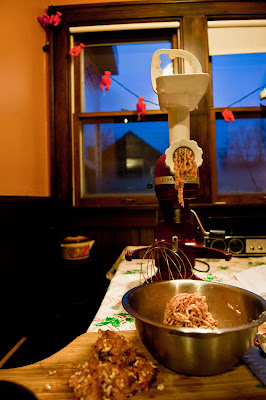 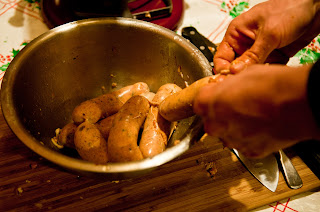 While the soup was cooking Scott made some turkey sausage.

I told you I was making the turkey into a lot of meals. I also saved the fall-of-the-bone turkey from the stock. 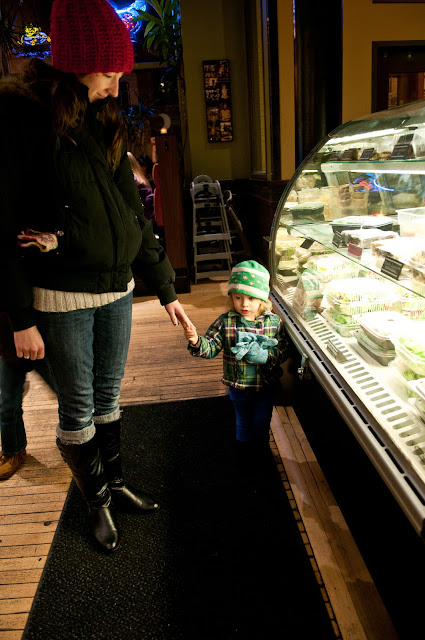 It was getting late and the soup wasn't ready yet. We decided to skip dinner at home and get a slice or two at Pizza Luce on the way to the parade. 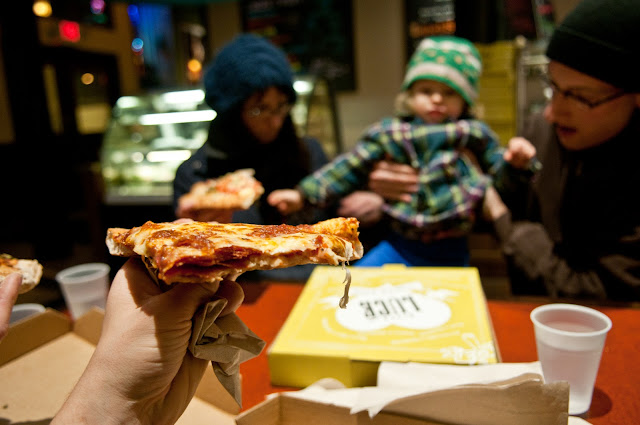 I wish we would've had time to order a whole pizza.

We hadn't been to Luce in ages, so this was kind of exciting. 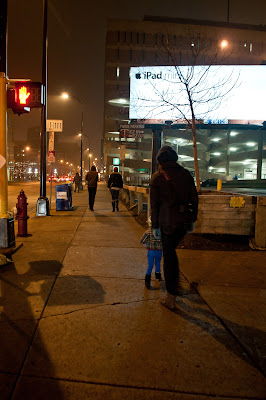 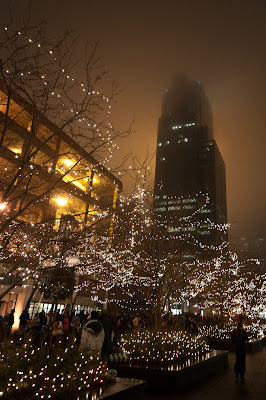 Then we walked over to Nicollet on this mild and foggy night. 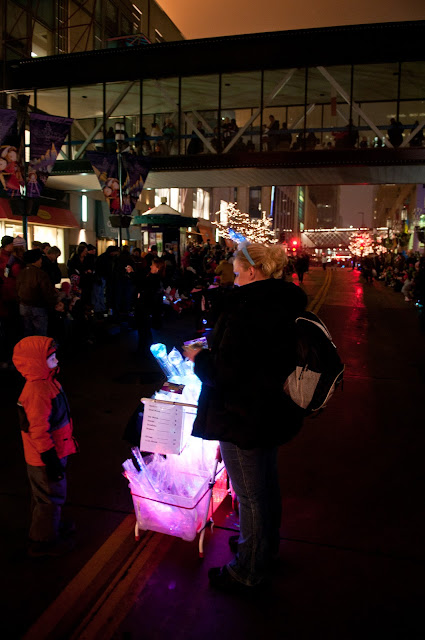 I had been to this parade twice before. Once with my sister and friend Morgan and another time with my parents. It was fun to go with an actual kid and see their perspective on it. 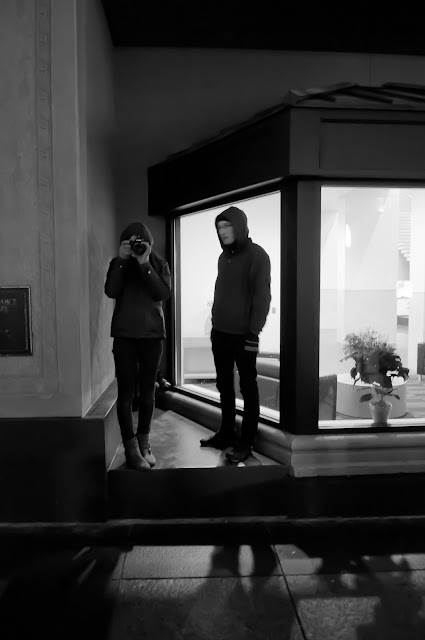 Emma and I took pictures of  one another. 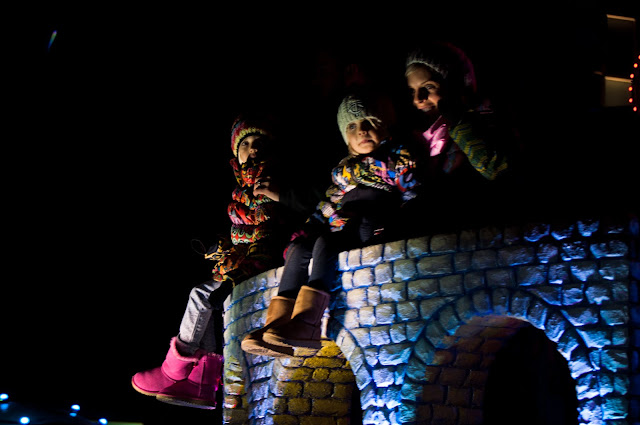 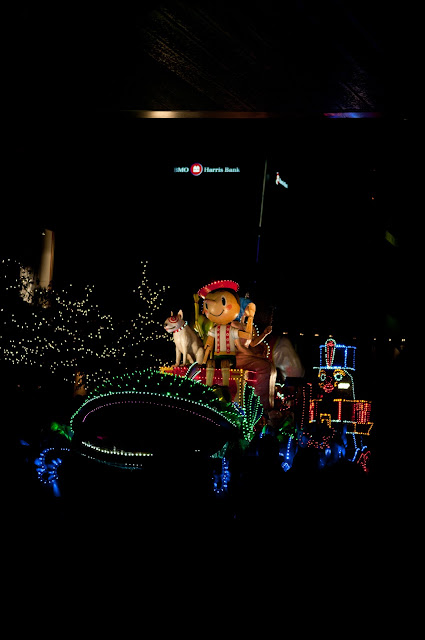 They turn the lights off on Nicollet and all the floats and people are lit up by Christmas lights. 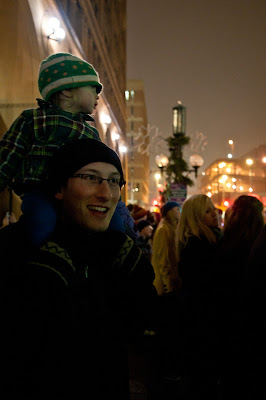 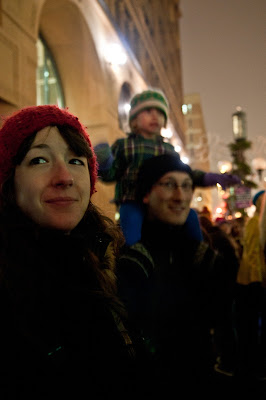 Everyone loved the parade, especially Olive.

I think Tyler liked it the most. 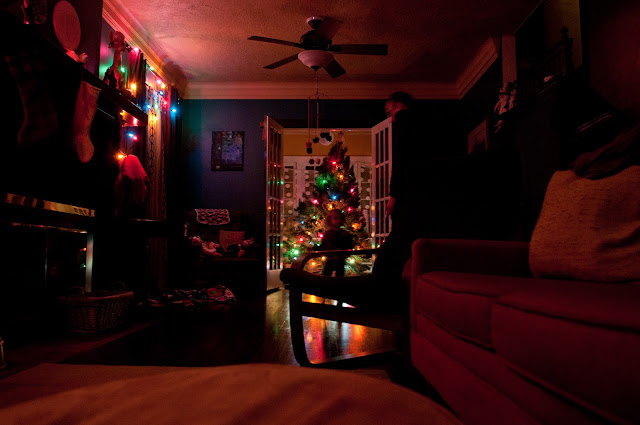 Back at Tyler and Emma's, Olive showed us their Christmas tree before heading off to bed. 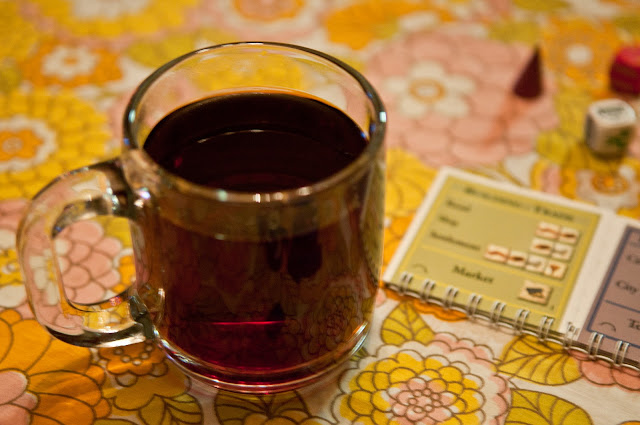 Then it was time for games and glogg. 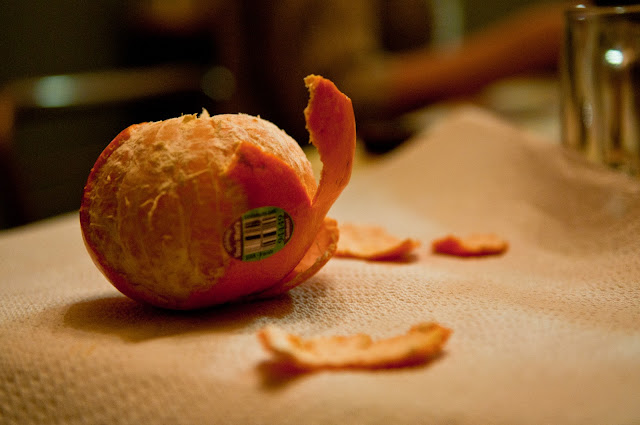 With a snack in between. 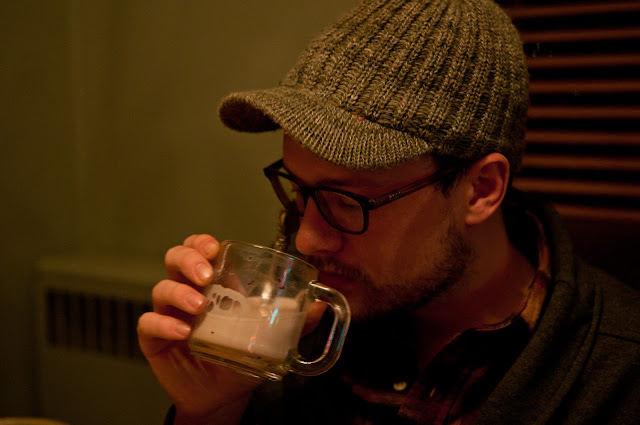 To see more photos and hear Emma's perspective on the day go HERE.