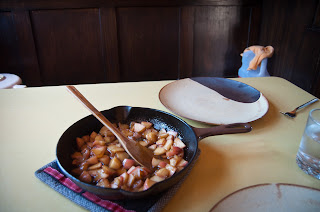 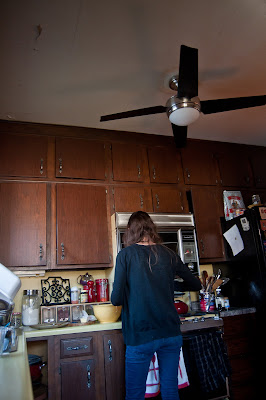 Even though Scott said he was sick of crepes like two weeks ago he again made crepes for breakfast. 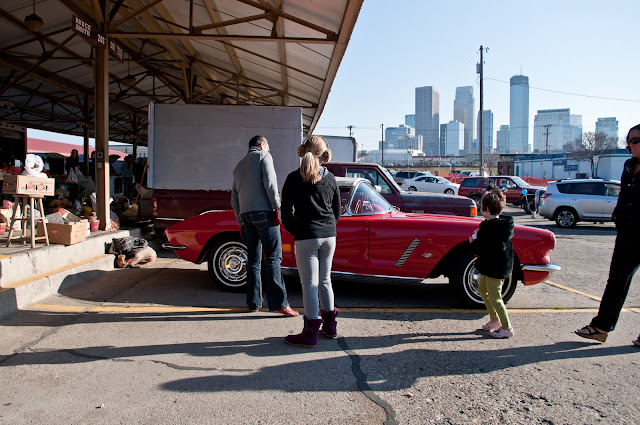 It was really nice out today and even though we really didn't need any more vegetables we decided that today would be the last day to go to the farmers market for real. 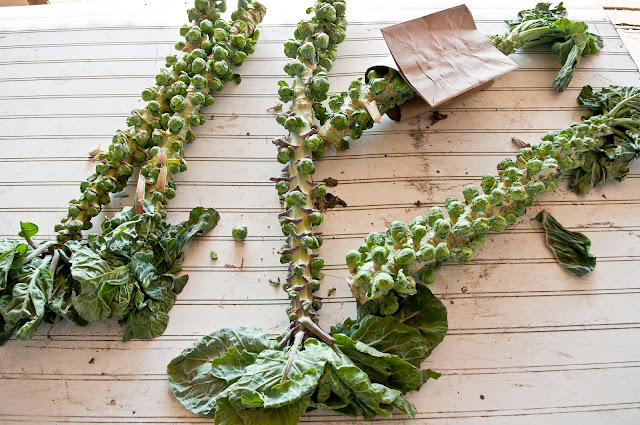 Who can say no to brussels sprouts on the stalk? 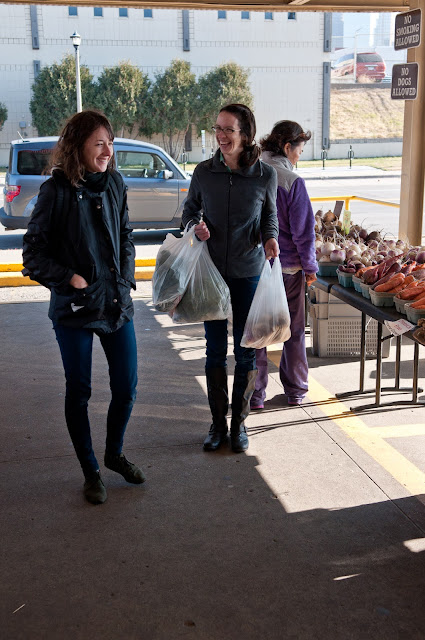 As we got out of car we saw Emma running towards us. Good timing on our parts.

She totally scared me. 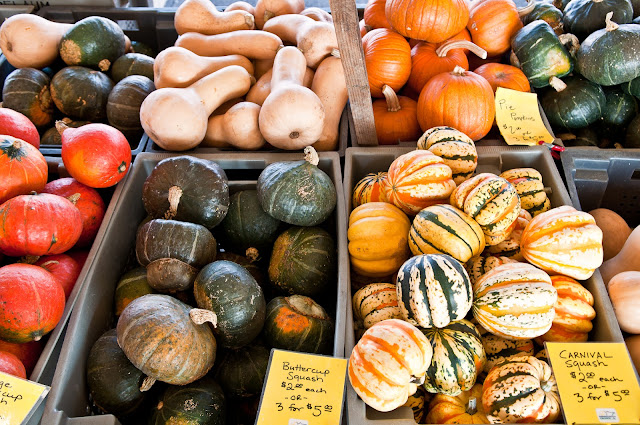 The farmers market had tons of squash, but I'm not a big fan of them. There are just too few recipes. It's got a place on our "we're sick of this list" that is topped by cucumbers. 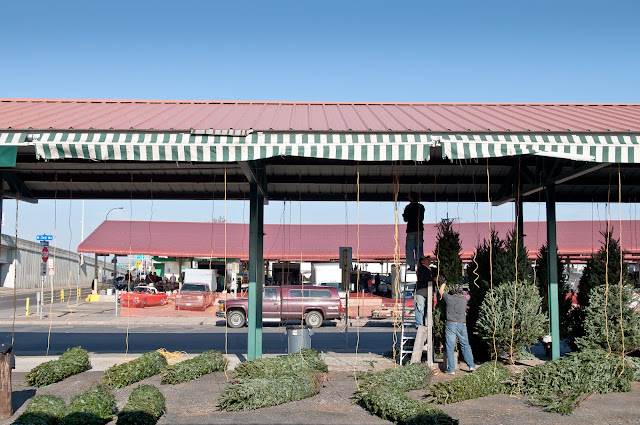 It's pretty crazy to be getting farm fresh produce at the same time Christmas trees arrive at the market. 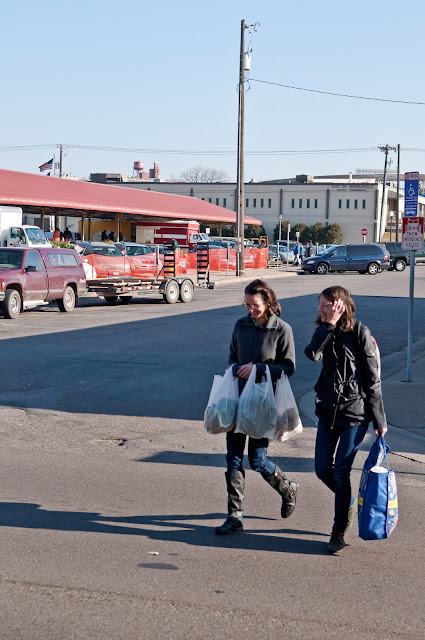 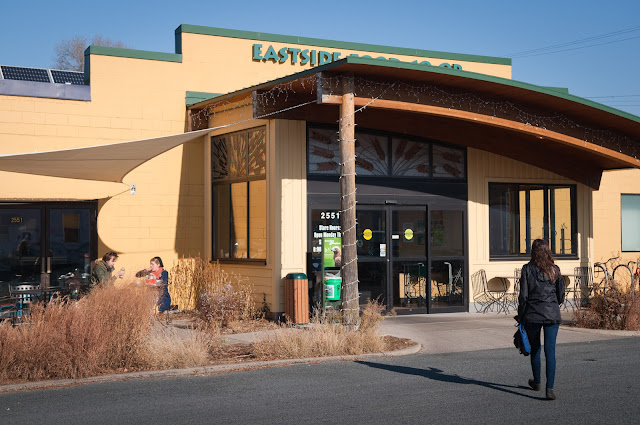 Afterwards we stopped by the Eastside Coop to pick up a few things. 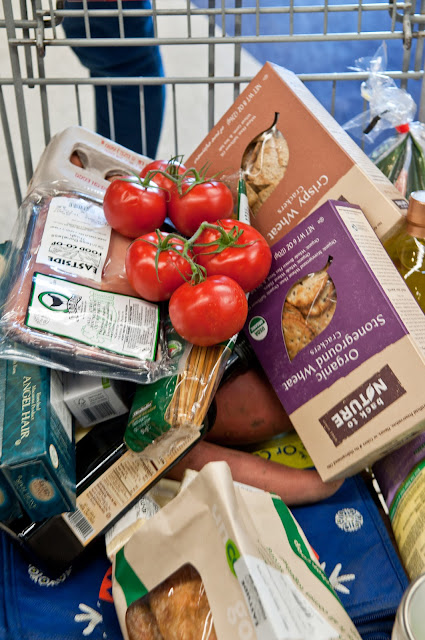 A few things turned into a lot of things. 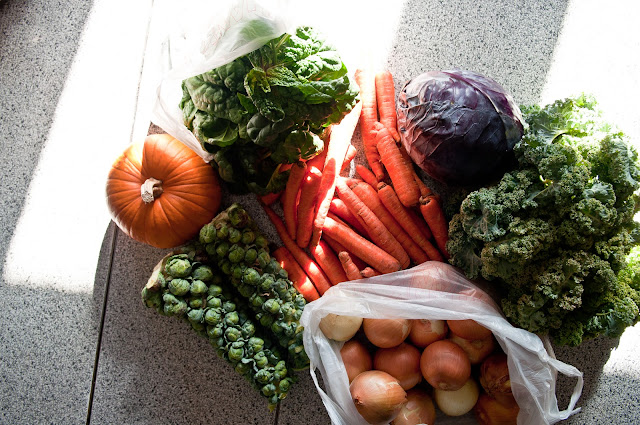 Our loot at the farmers market. Pie pumpkin, spinach, carrots, red cabbage, a bunch of kale, brussel sprouts and onions. All for only $19. 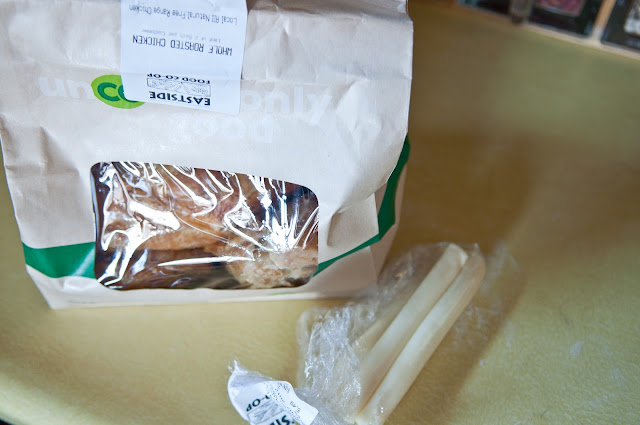 We've been eating vegan lately,  but not on purpose. We discussed getting chicken and saw that a rotisserie chicken was cheaper than buying a whole chicken. We also loaded up on cheese.

We ate the drumsticks for lunch with a side of the best string cheese we've ever had. Scott had a photo shoot today and prepped for that.

I'm shooting businesses for Google Business photos as part of my freelance routine. This time I shot Doc's Gym over on Penn and Lowry. I take typical editorial style photograhs and also create Street View tours of the businesses. I like doing the shoots, but getting clients takes a lot of leg work. 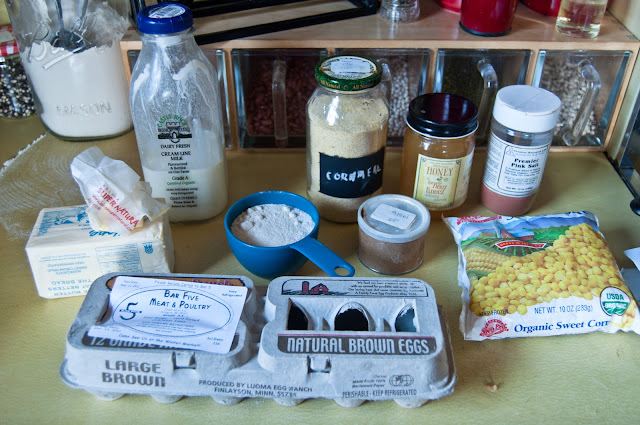 Tyler and Emma asked us if we wanted to come over for chili and games. I offered to make some gluten-free cornbread. 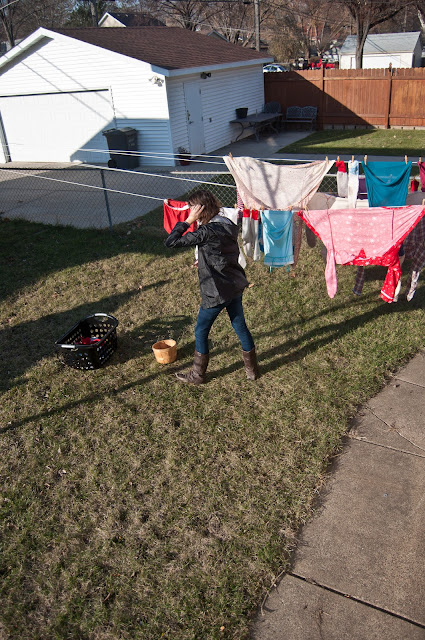 I did laundry on what may be the last day to hang stuff outside. 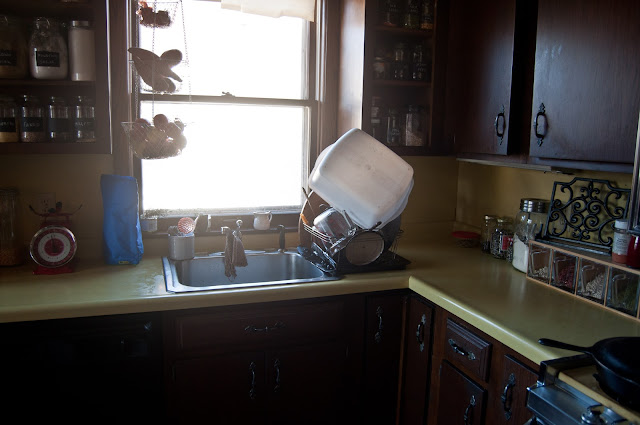 While Scott was gone I cleaned the kitchen. 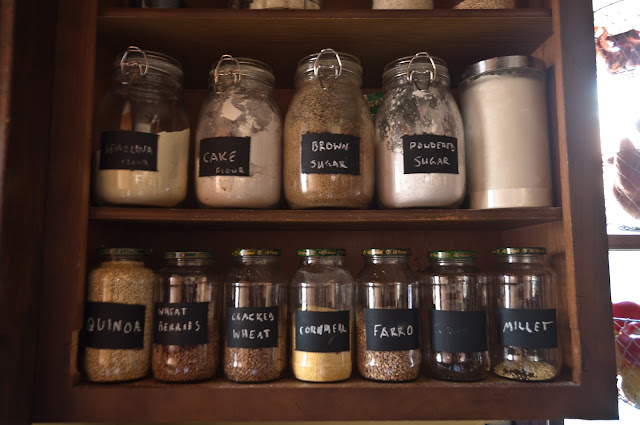 In case you were wondering how my chalkboard jars turned out. Much easier to distinguish what is what. 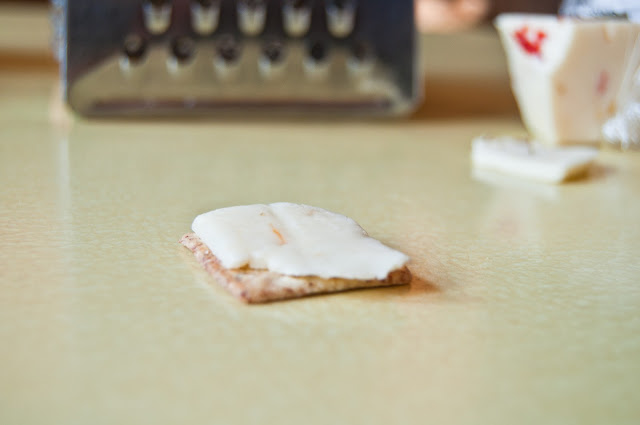 I then snack on crackers and cheese.

When Scott got back we went to Babies R Us to do some Christmas shopping. 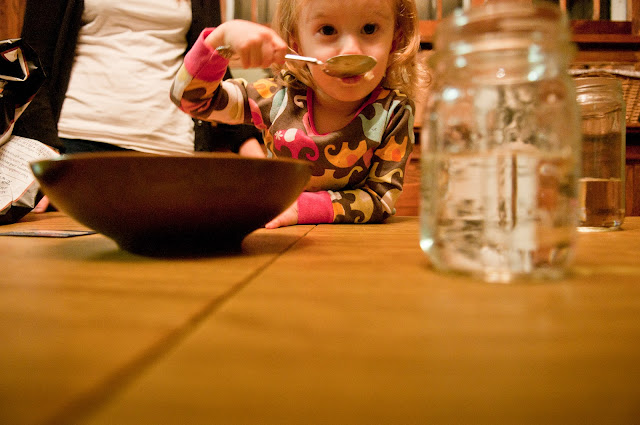 Then we headed over to Tyler and Emmas. 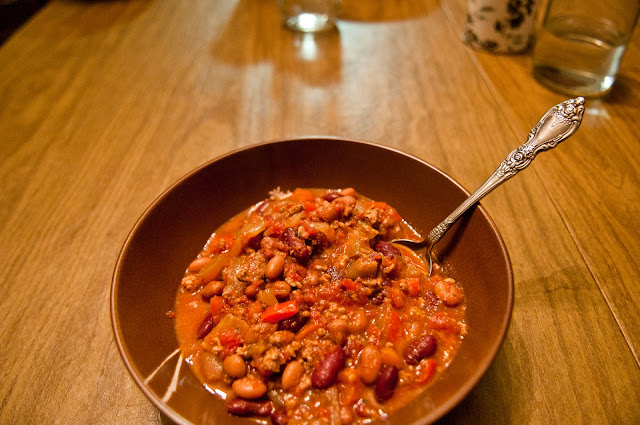 My chili started out traditional. 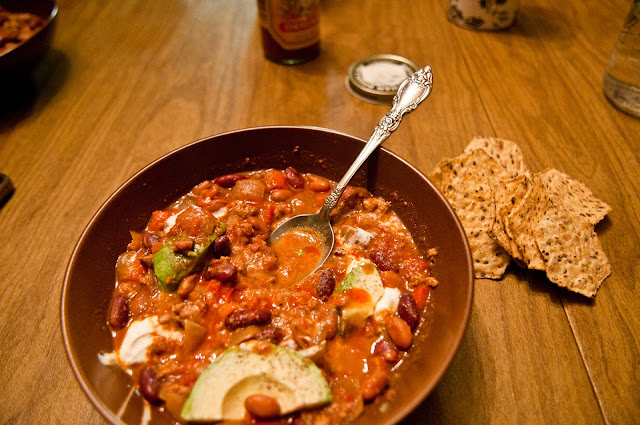 Before I knew it I had a fiesta of a bowl. Avocados, yum! 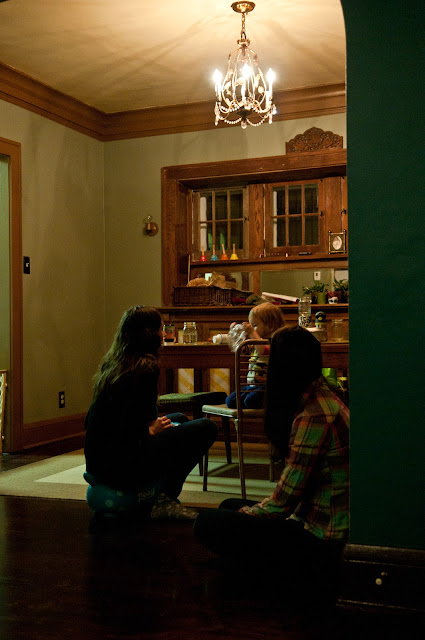 We played with Olive after dinner and before she went to bed. 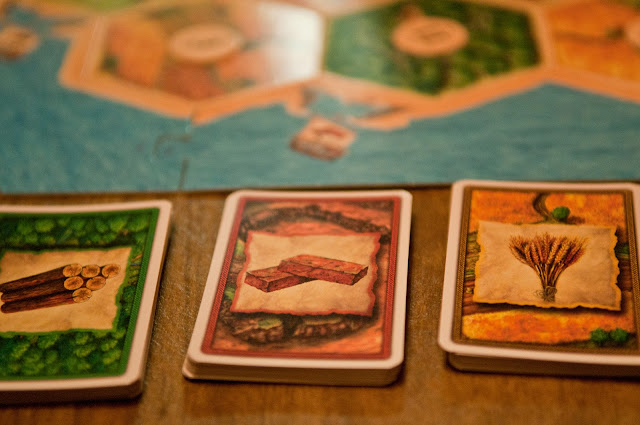 Then it was time to play Catan. Scott and I were completely lost after not playing in a long time. 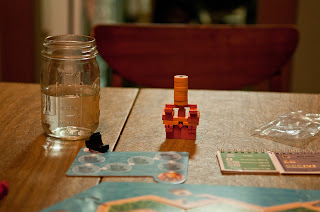 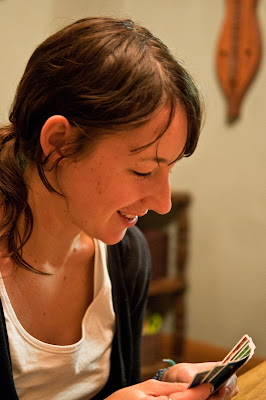 They have the expansion pack for it and it makes the game overly complex. 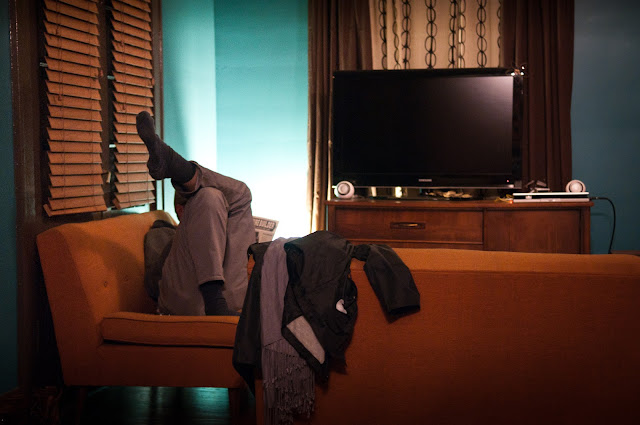 About 20 minutes in the game Scott gave up hope of winning and quit. He entertained himself by reading the manual during the two hours he waited for our game to finish. I ended up winning which was the first time I ever won that game.

I feel like I always get caught in the middle of the board. There wasn't much of a chance for me, so I thought I'd study the game. I now know you can block intersections with a settlement. We'd never played that way. Next time I won't be such a sore loser.

Maple Grove Ice Loop, a Brewery Worthy of a King and a Buffet

By Scottie and Brooke Tuska February 26, 2022
Pancakes for breakfast. Even Scott joined us. Brooke decided we should make a day of it. But first we had to go to the library. Theo just kept on handing me the first book he saw. Like everything else, Meadow always says she doesn't want to go to the library. Yet she finds like 20 books every time we go.  Maple Grove's ice loop is just about the only reason we head to this side of the Twin Cities.   Ice skate season is already almost over. They're one of the last ice rinks still open.     Once in a while we can convince Theo that he doesn't need the trainer.   A perfect day.  Meadow wanted to race around the track the entire time. Theo doesn't really need it, but he likes to goes as fast as he can (in spurts) with the ice skating walker grandpa made us. I liked seeing the other handmade trainers. This yellow looks like it has a built in seat in the front.    We kept on skating until the Zamboni had to touch up the ice. I suggested we go play on the playgroun
Post a Comment
Read more