The Last of the Fall Chores 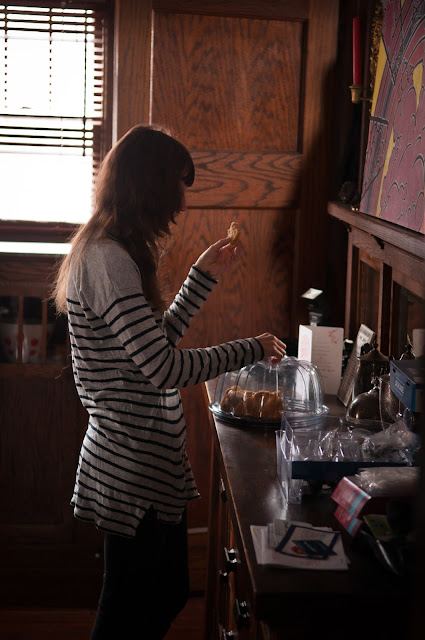 While Scott makes breakfast I get impatient and eat cake. 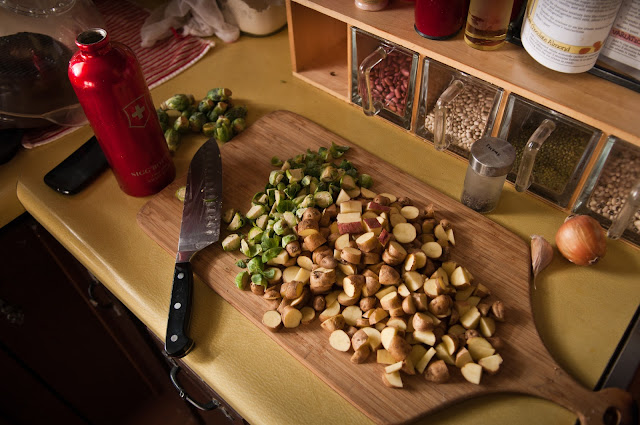 I decided a brussels sprout and potato hash would be a great use of the former. This would have been so good with some high quality corned beef. We both miss the corned beef hash at the shuttered Dinkytowner so much.

Eggs on the Side

Heat a cast iron skillet over medium heat and add two tablespoons olive oil. Once hot, add potatoes and brussels sprouts. Cook for 30 minutes, stirring occasionally. I like to scrape up the charred bits with a metal spatula.  Add oil as needed Once the sprouts and tatters are tender add the onion, garlic and thyme. Cook until onions are slightly browned, no more than 10 minutes. Don't forget to salt and pepper. 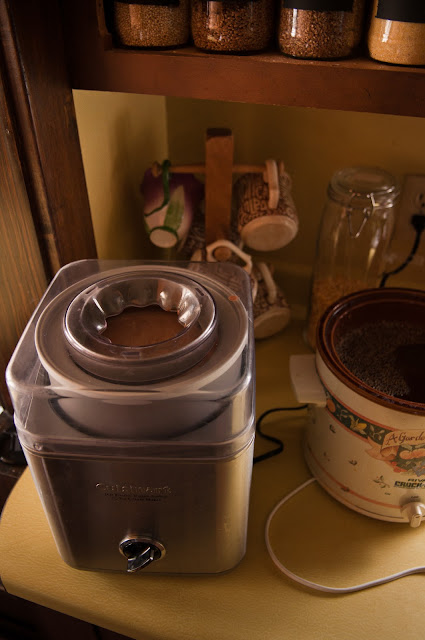 I had prepped a batch of choclate ice cream the night before and thought it would be best to get frozen early. That way it could sit in the freezer the rest of the day. We used up the candy that we didn't eat (which wasn't much) from Halloween. 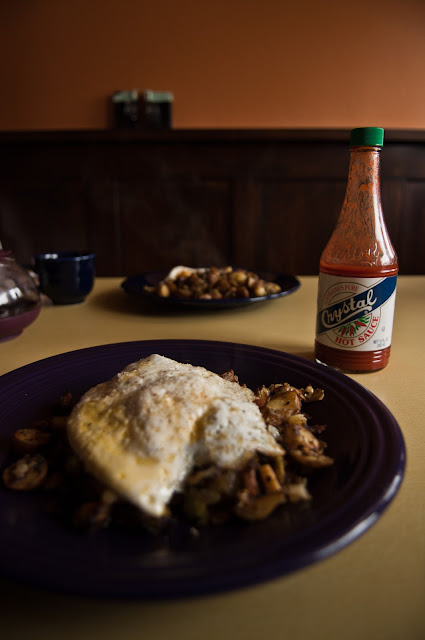 Because of Scott liking sweets and crepes for breakfast, I was surprised he made this. 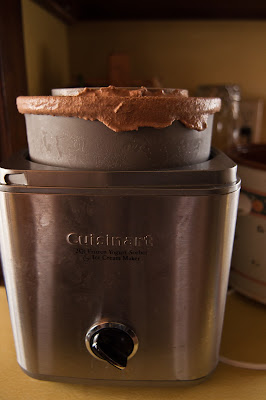 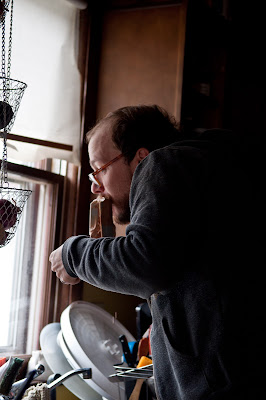 I made slightly to much ice cream for the size of our ice cream maker. It started going over near the end.

I guess he did need sweets because he licked the ice cream paddle. 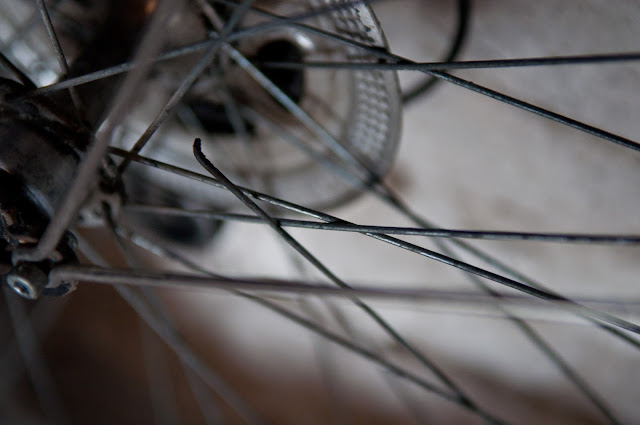 We were going to bike to the farmer's market. When I was pumping my tires up I noticed a broken spoke. No biking on this day. 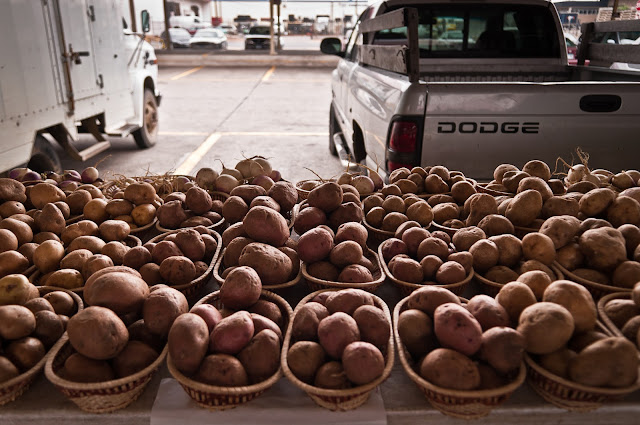 We were running low on veggies so off to the farmer's market we went. 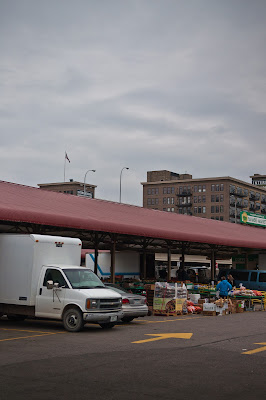 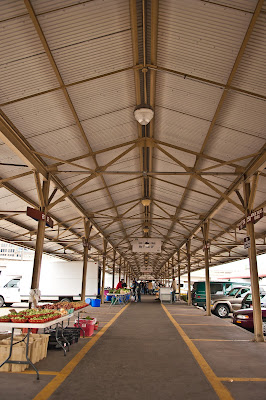 There weren't as many vendors this time, but we got some awesome deals, as its the end of the season and probably the last time we go. 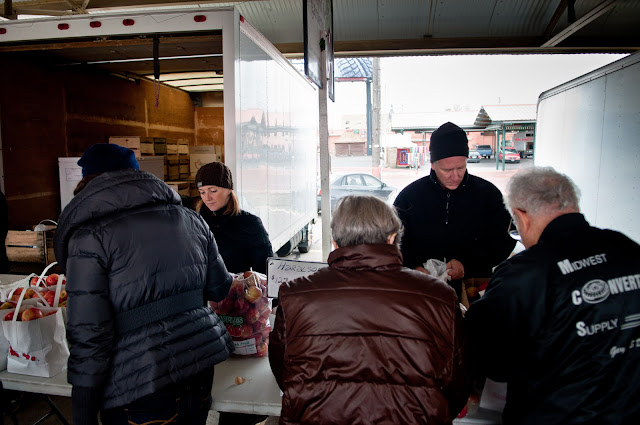 We picked up another gallon of apple cider. 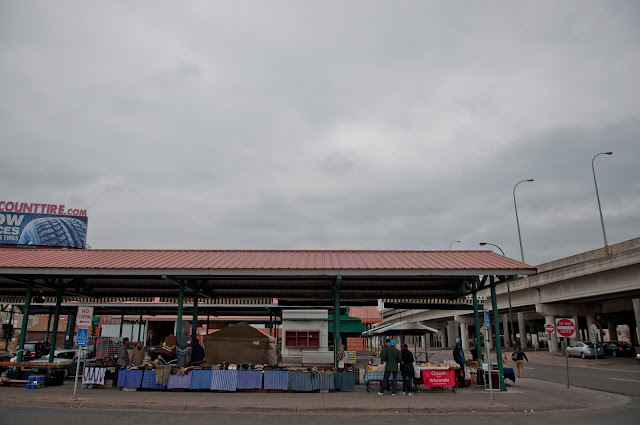 Even the annex side only had a few vendors. 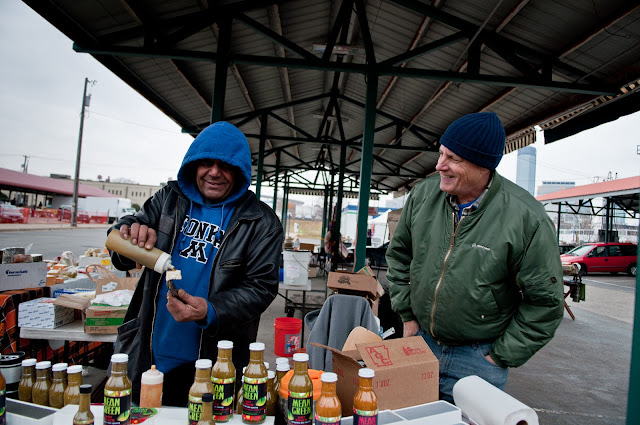 We always see this hot sauce maven and the cheesemonger, but never buy anything. I decided we'd change things up. The hot sauce was really good, almost like a super-spicy tomatillo salsa. 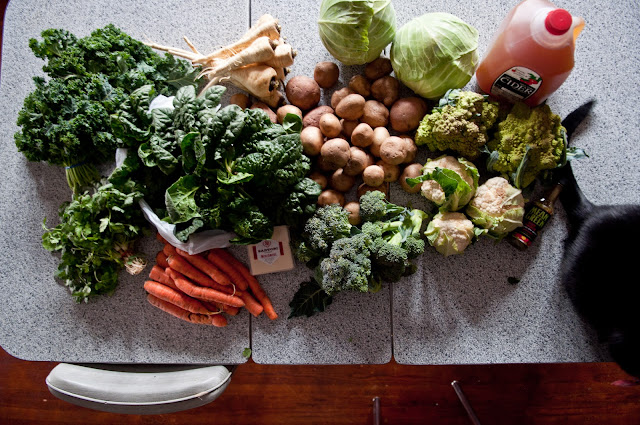 I thought we'd only come home with a few things so I was amazed when we filled our first bag right away. Today we got kale, parsnips, cabbage, apple cider, spinach, potatoes, romanesco, cilantro, carrots, cheese, broccoli, cauliflower and green hot sauce. As well as a kitty butting in on the photo. 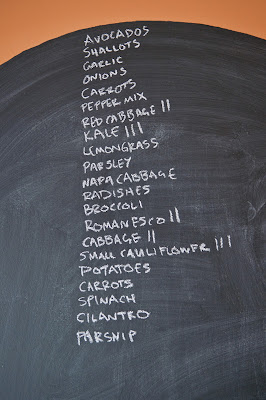 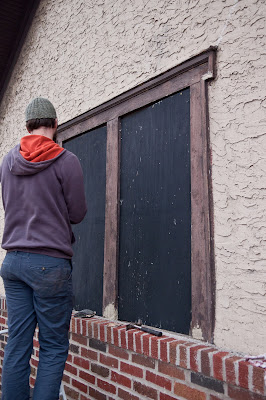 I went through and did an inventory on all the vegetables we have so we know what to make for meals.   While I was doing that, Scott went to work on the trim on the garage. 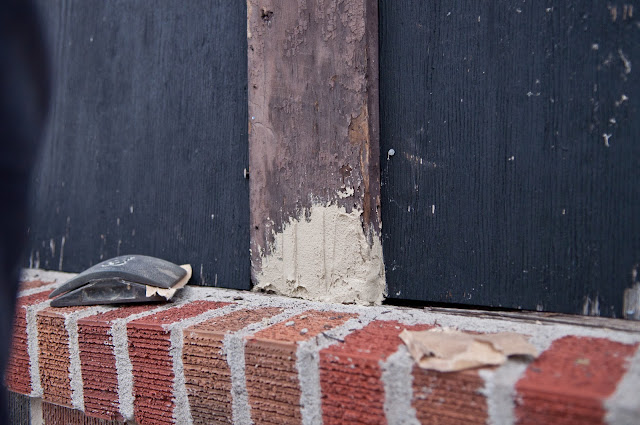 This rear window on the garage has been boarded up for years before we got the house. While most of the trim on the house is in good condition and painted well, this was not the case here. 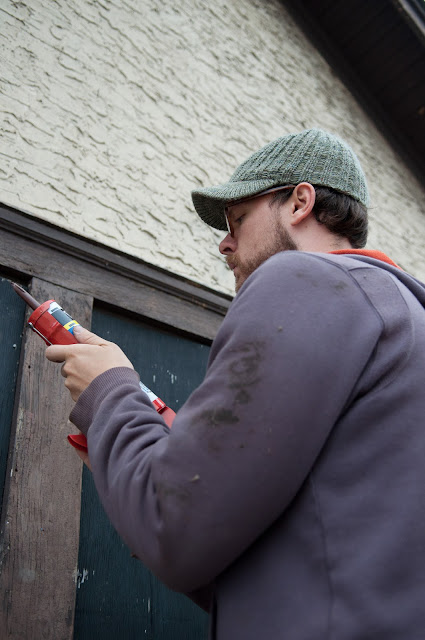 The caulking along the edge of the frame was nonexistent and the paint needed a fresh coat. Parts were slightly rotten so I had to chip them out and put some wood filler in. 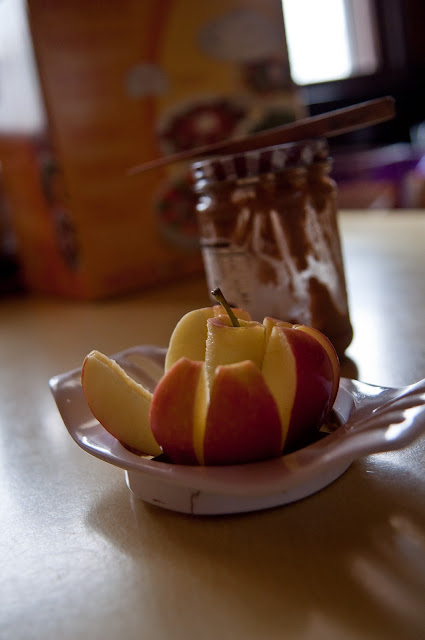 It was too cold out for my bones so I stayed inside and worked on things. I did dishes, then had an apple and almond butter snack. 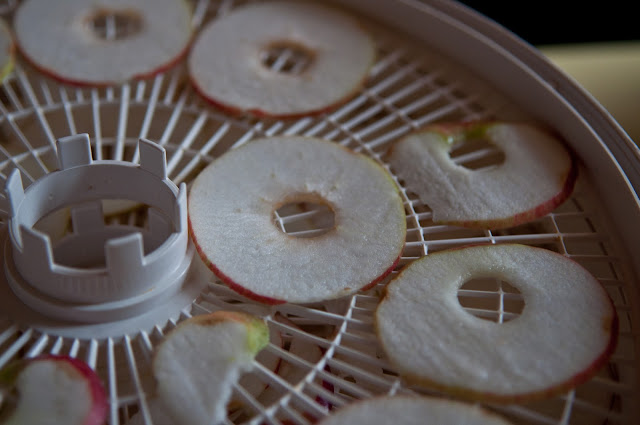 Then I cored and sliced up the last of the apples from my Grandma's tree to make apple chips. 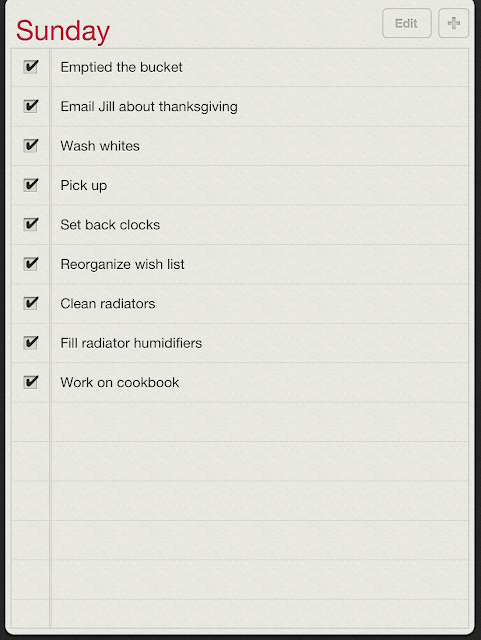 I also did all this. 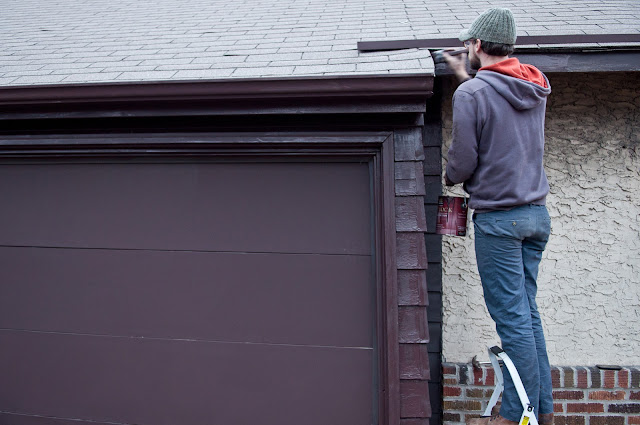 A few hours later he was still outside painting.

I pretty much finished painting most of the garage except for the facia boards up top and side facing the house. I'll have to finish this sometime this week before it gets to cold. This paint can go down to 35 degrees, so that won't be to long. 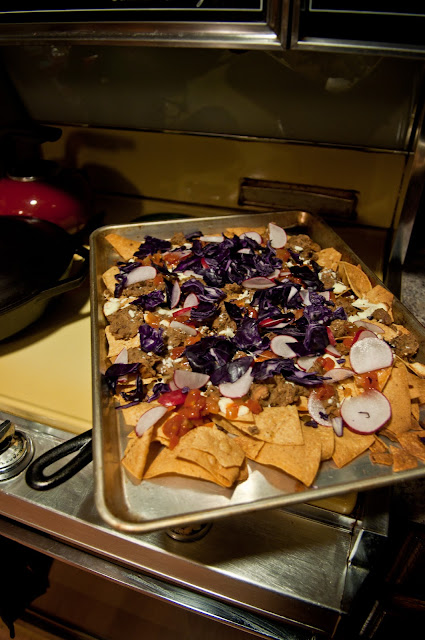 For dinner Scott made a quick meal of nachos with our leftover taco fillings. 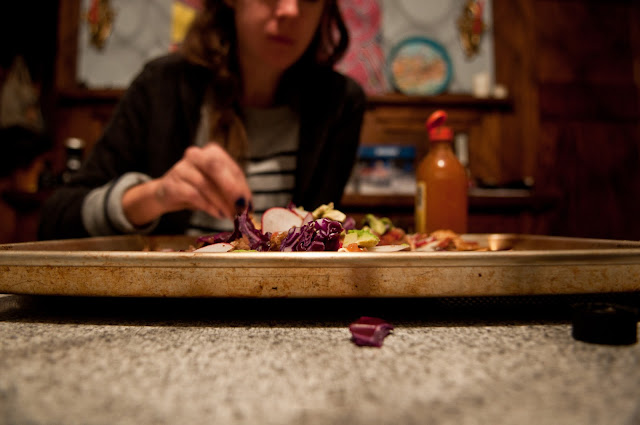 I had made some pulled pork and refried beans the night before. By the time I was done working on the house, cooking a from-scratch meal was the last thing I wanted to do. 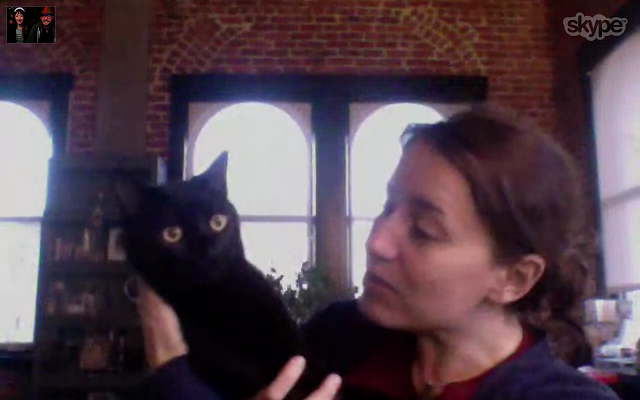 Then we Skyped with Scott's sister Katrina. Who doesn't have a black cat these days?

She used to live in Chicago, but she left for the left coast about the time we got our house with her now husband, Dennis. I guess that means she's been in San Jose for two and a half years.

Katie Kat hadn't moved into this apartment last time I was there. I hope we can visit them Dennis and Katie soon. It sounds like they're looking to move back to the midwest in the summer. 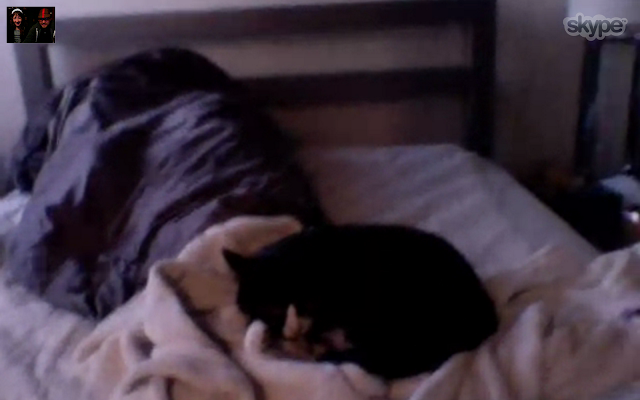 She gave us a tour of the place and her kitties, Scratchy and Olive. 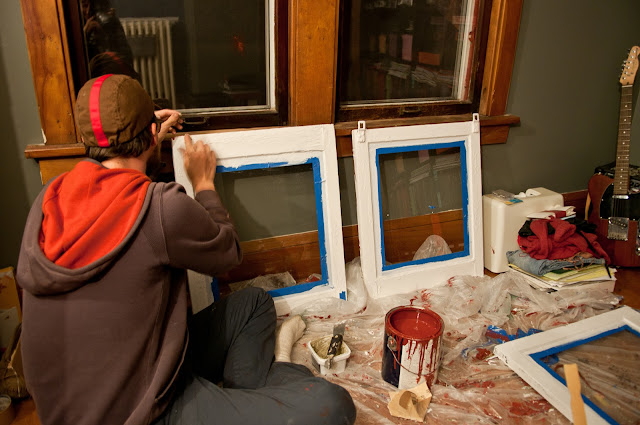 While Skyping Scott "had" to paint the storms.

I was on a tear and couldn't stop. 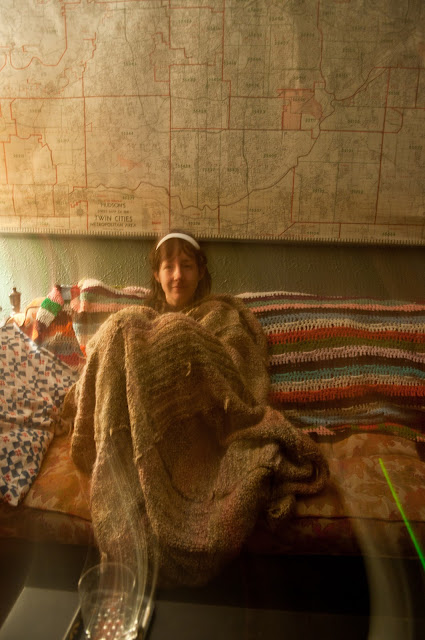 After we finished chatting with my big sis, we decided to watch a movie. By the time I had put the DVD in and turned around, Brooke was already snuggled under the blanket.

Our night ended with watching Bel Ami. We thought Robert Pattinson looked like he was on drugs throughout the whole movie.

He did not look healthy. OK movie. I'd give it 2 1/2 stars on the Scottie Scale.