Honeymoon: Back to the Cottage 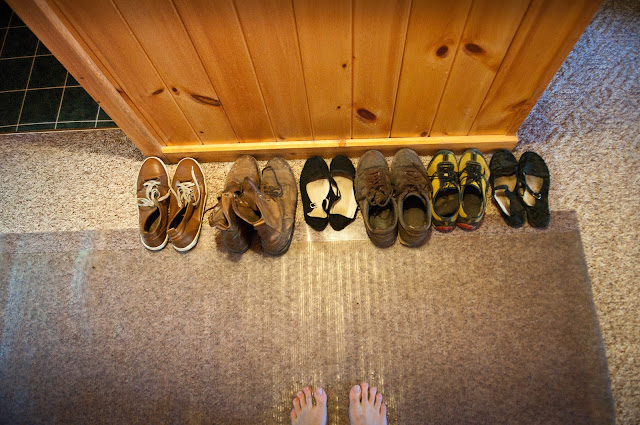 We decided to turn the second half of our honeymoon into a relaxing time at my parents cottage in northern Wisconsin. It was weird sleeping in the cottage after being in a small tent for a week. My dad called to see if we made it in okay and I mentioned it felt too open and civilized being back at the cottage. He said, "Why don't you pitch a tent out back then?"

I was OK with the bed. I slept like a baby. Who knew we had this many shoes with us? 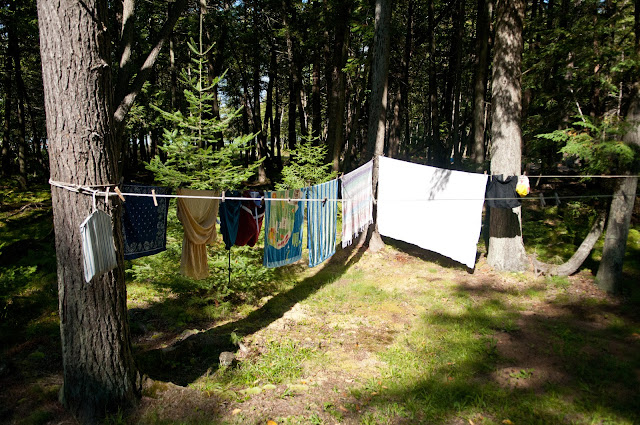 Immediately when I woke up I did laundry and cleaned out our car. After setting up camp so many times we started shoving things back in without putting them away. I wanted to get everything back in their right place. 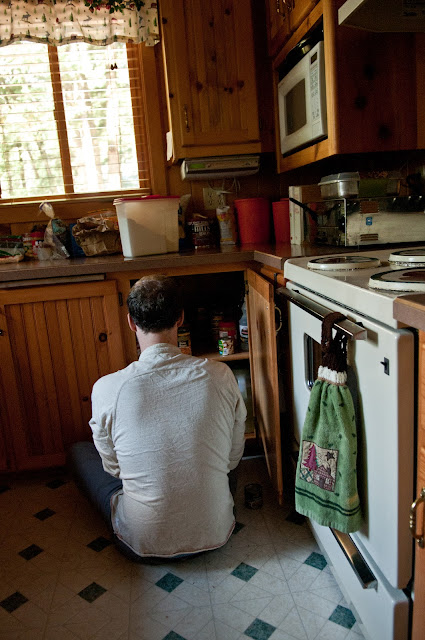 Scott picked on me for working instead of relaxing. Later I found him reorganizing a cupboard.

There was no order to there canned food. Why would you have soup in line with canned mushrooms? 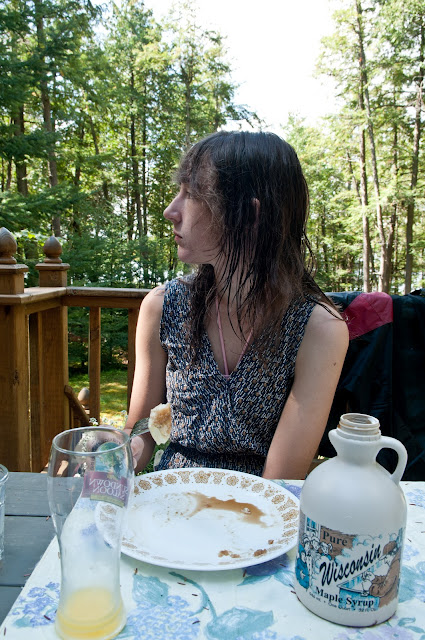 We enjoyed pancakes for breakfast. I know Scott was getting sick of oatmeal. 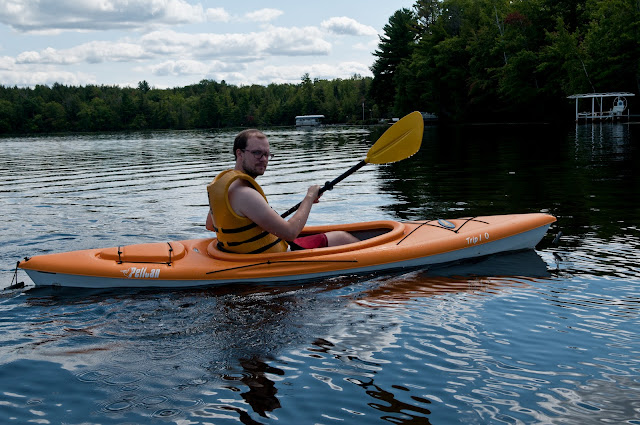 We needed to go grocery shopping, but I said we should spend time on the lake first. 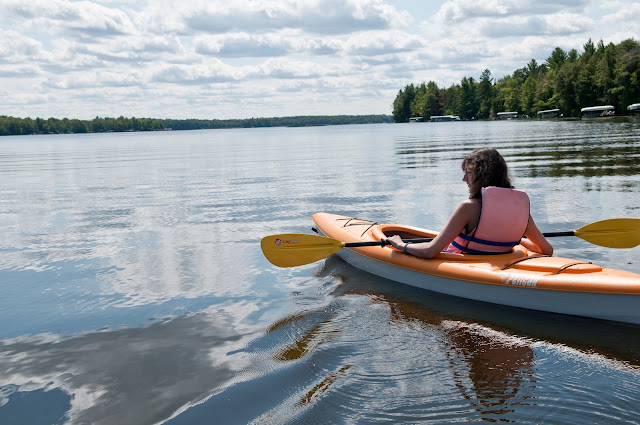 We took turns going back and forth since we had one kayak and a paddle boat. 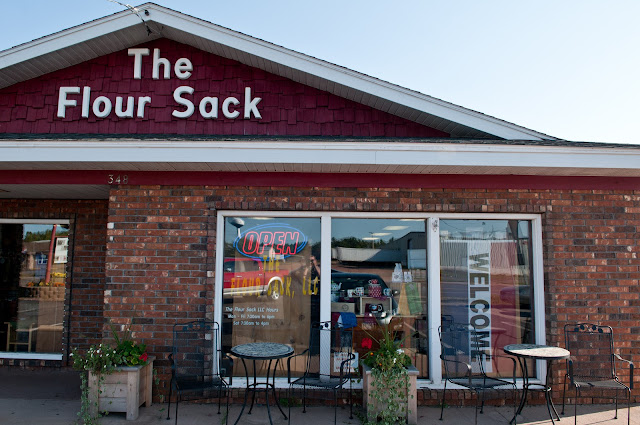 Then we did our annual ritual of grocery shopping. First stopping at Prime Choice for our meat, The Flour Sack for bulk goods, Trigs for groceries and the Corn stand for, well corn.

Prime Choice has great handmade sausage and I always make it a point to pick up something. 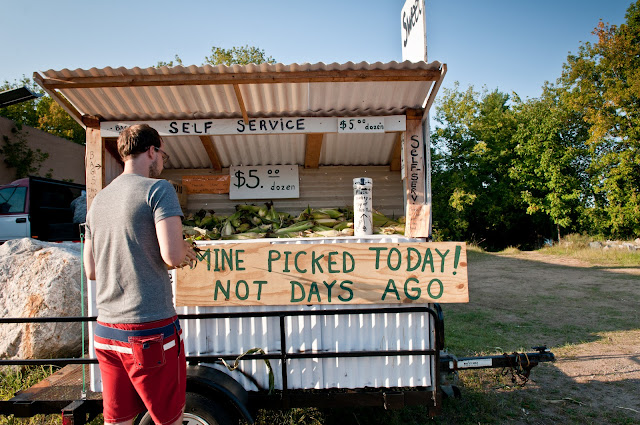 There was a "farmers stand" next to here that was selling peaches and corn. I like the sign that this corn farmer made to get people to go to his stand.

Another stand that's manned daily is less than 30 feet away. I couldn't look at him while picking up the fresher corn. 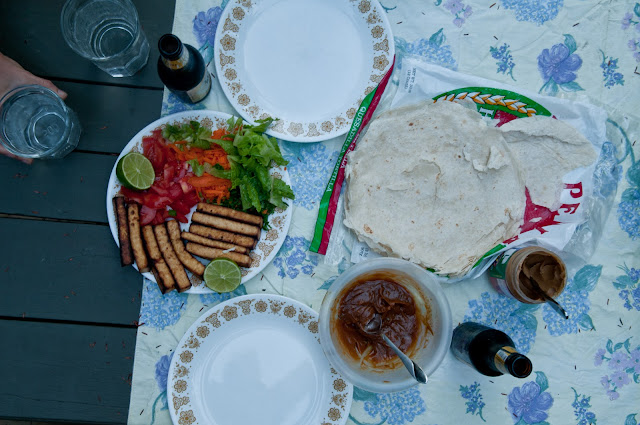 I was excited to be eating fresh foods again. 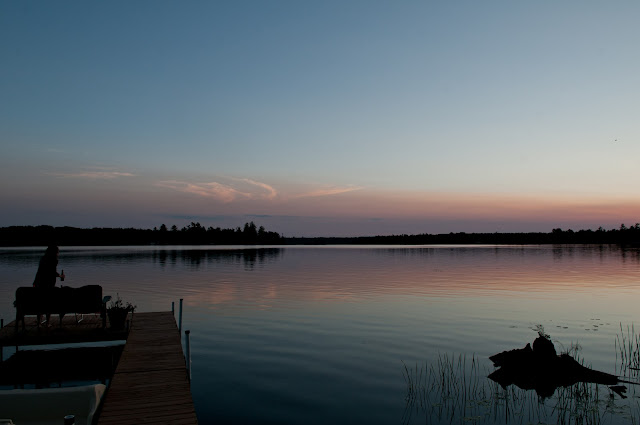 We then enjoyed our beers and the sunset down by the lake. There was hardly anyone up during the week. The lakes were so quiet. 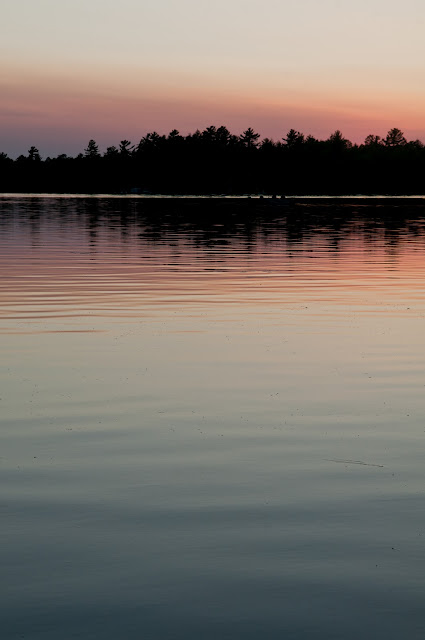 I pretty much got a great sunset every day we were at the cottage. 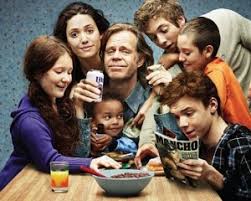 It was nice not having to rely on electronics for awhile, but we brought our Netflix dvd along with to have something to do when it would get dark at the cottage. We watched the first few episodes of Shameless, our new favorite show. Makes me want to live in Chicago.

Love the show. Love that city. 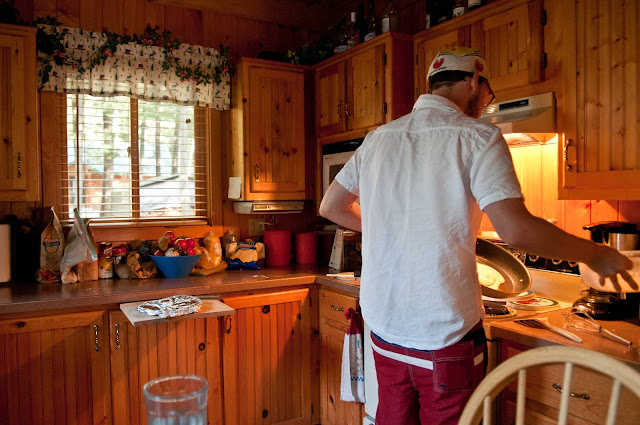 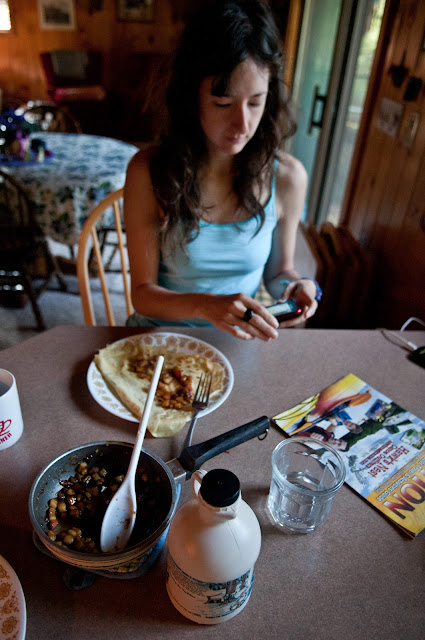 My family always ate crepes. The only time I got pancakes were when my dad picked up McDonald's hotcakes. We always ate our crepes just like pancakes with Log Cabin Syrup. Now I make fancy fillings like apple cinnamon maple syrup. 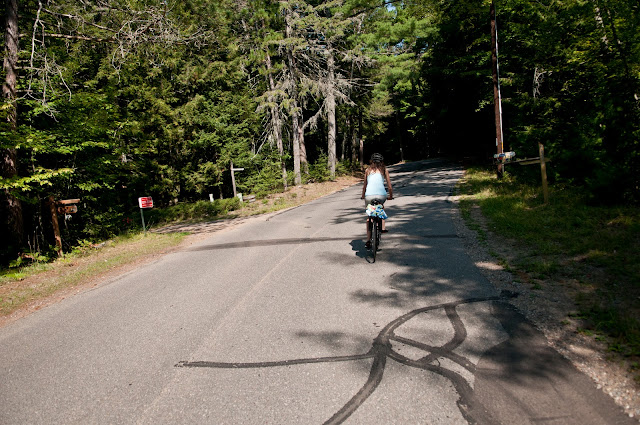 We thought we'd go for a bike ride after breakfast. 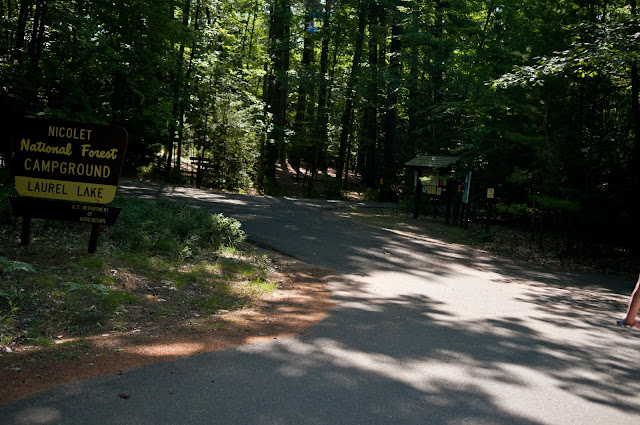 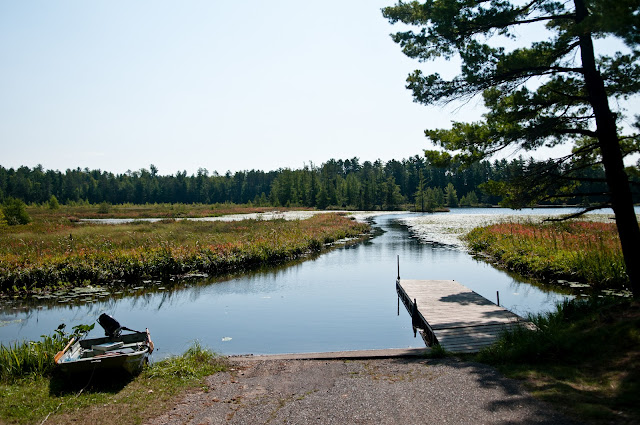 This location would be good for people who have boats or like to fish. 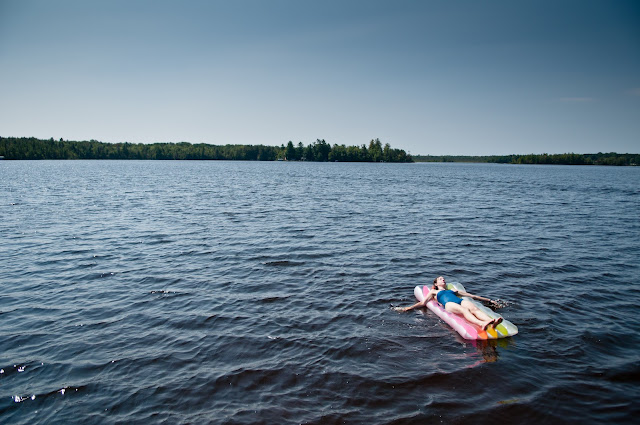 Then we relaxed by the lake all day. 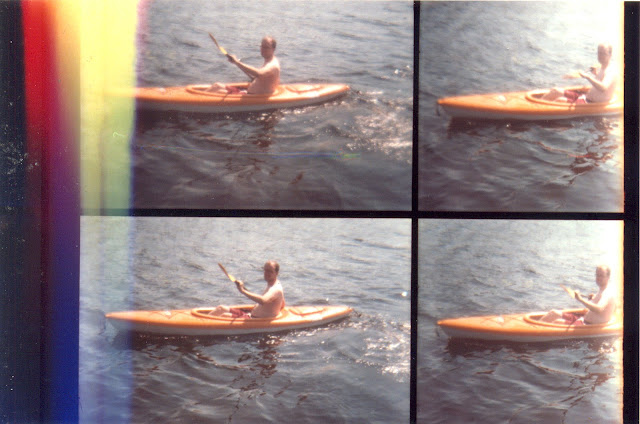 I took a quick lap around our half of the lake. 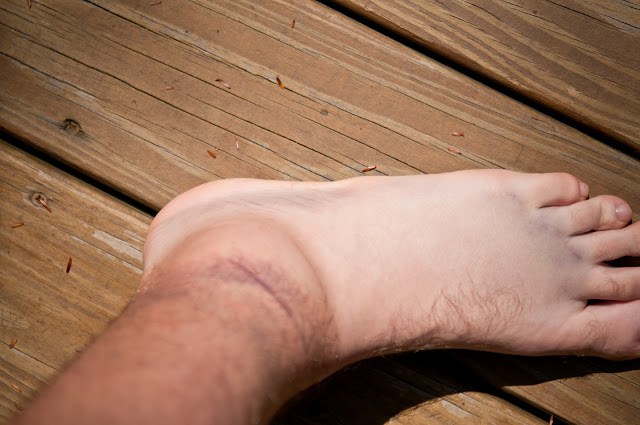 I suggested we go on a long paddle boat ride. We went down a long channel near our lake. A boater passing us took our photo. We must have looked cute. 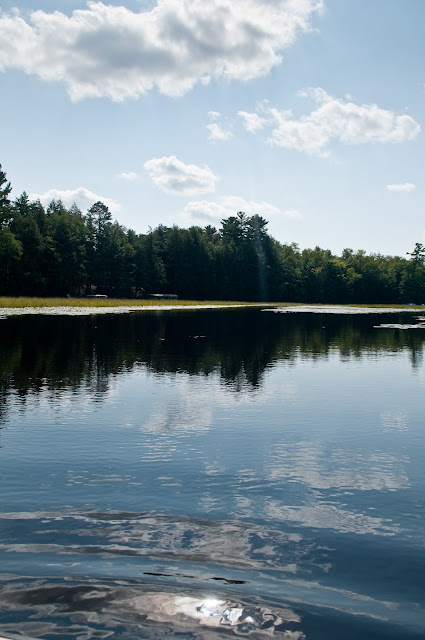 Despite my ankle we kept on moving. 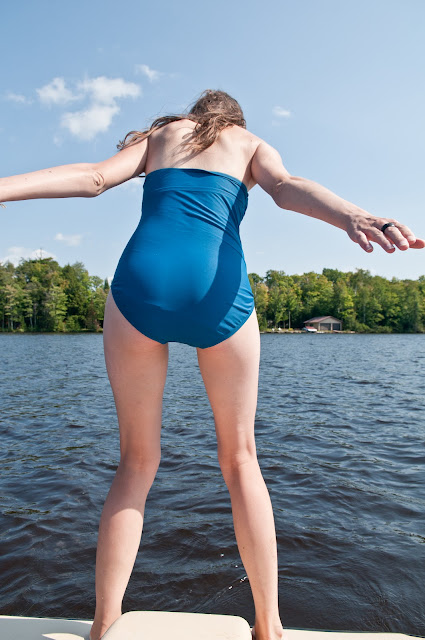 The long channel brought us to Crystal Lake. I was sweaty from paddling and decided to go for a dip. 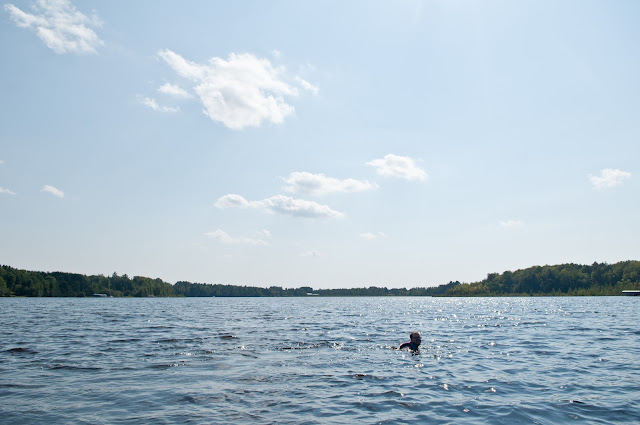 I have a minor fear diving into the middle of lakes. I couldn't swim until I was in middle school. I decided to jump in with a life jacket on. A few seconds later I felt safe and took it off. 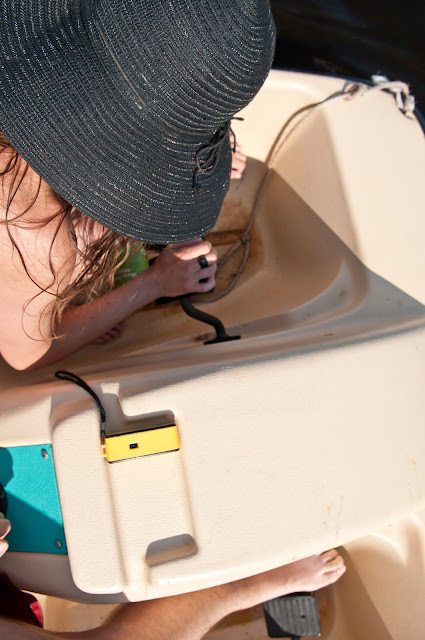 On the way back my legs got tired so I used my arms. Scott thought this was amusing.

This was just before we realized my back and chest were burnt like a mother; just as my ankle started feeling better. Hot damn. 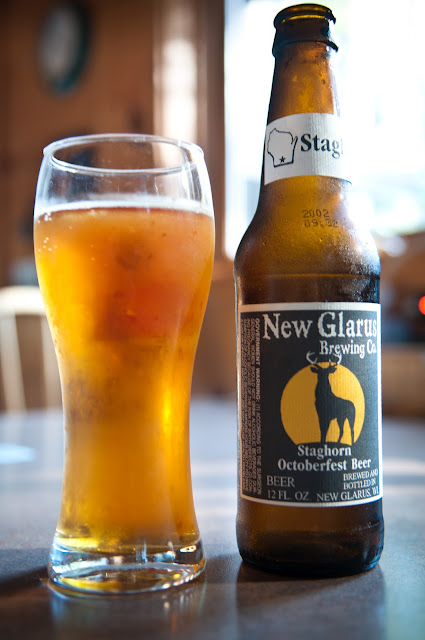 Since we were in Wisconsin I had to get some beer. A New Glarus is always one of our choices. 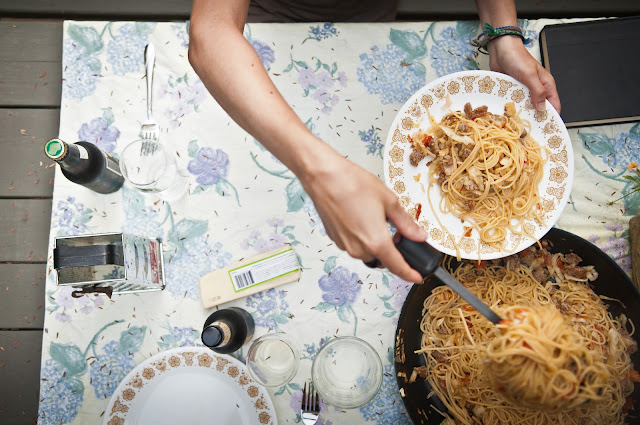 Last year at the cottage I made this sausage, cabbage and pasta dish. Now it's a tradition to eat when we're up north. I drank a Milwaukee Brewing Company Love Rock with dinner. It was so good. Makes a man look forward to the day they distribute in Minnesota. 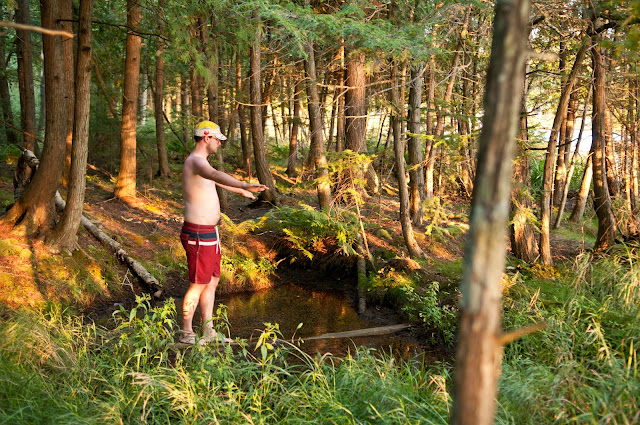 Scott asked why there was a board in the middle of the marsh. I said it was a bridge. When I was younger I had plans to dig out the marsh to the lake so a stream would form and then I could float through on a tube. I never finished.

Did Scott fall in?