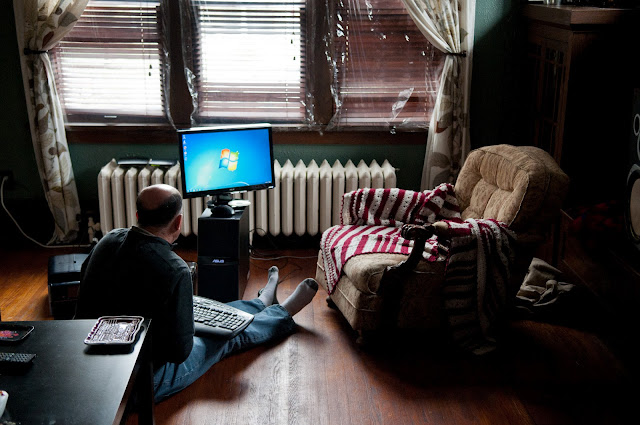 My pops came up for the weekend so I could fix his computer. Being a geek can have it's pluses, but I'd rather have my parents come up to the cities for fun, rather than fixing their PC. 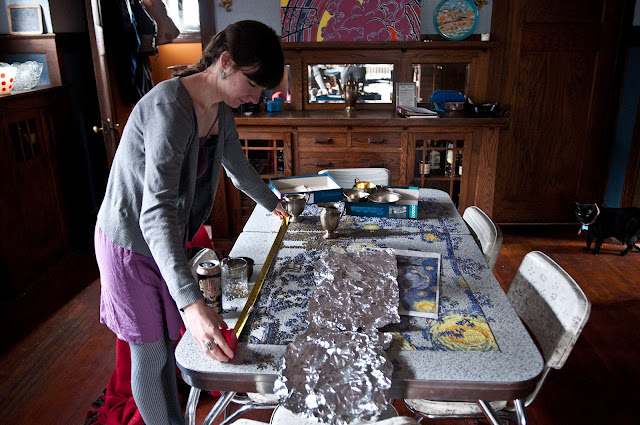 Brooke realized that our art table could fit the puzzle, so we went ahead and measured it.

I can't believe I didn't think of this months ago. 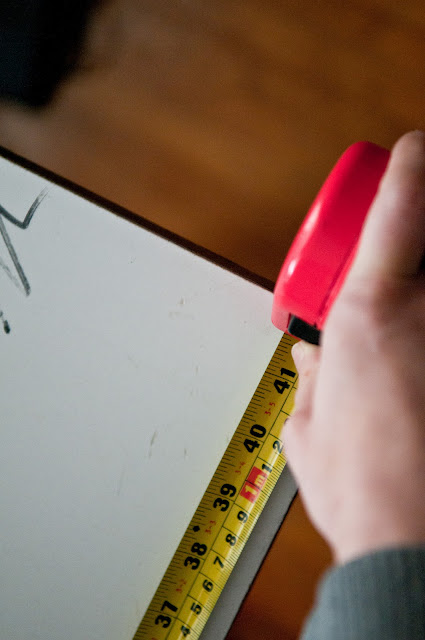 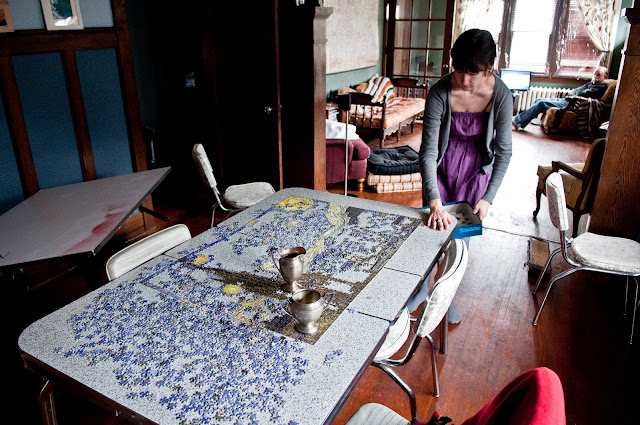 We brought it down as my dad watched us move the puzzle very, very carefully. 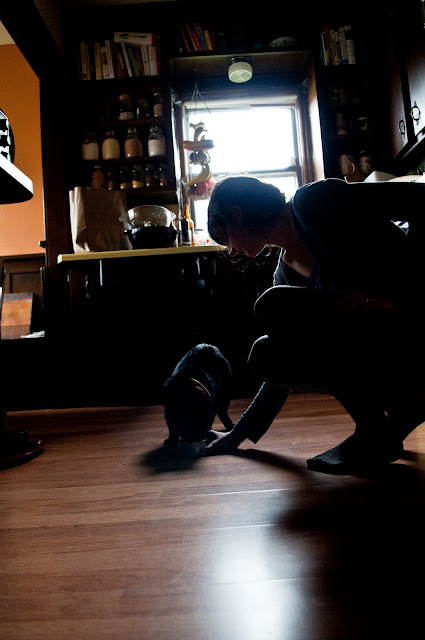 Peanut couldn't get the last bits of his food so Brooke helped him by holding the tin can. 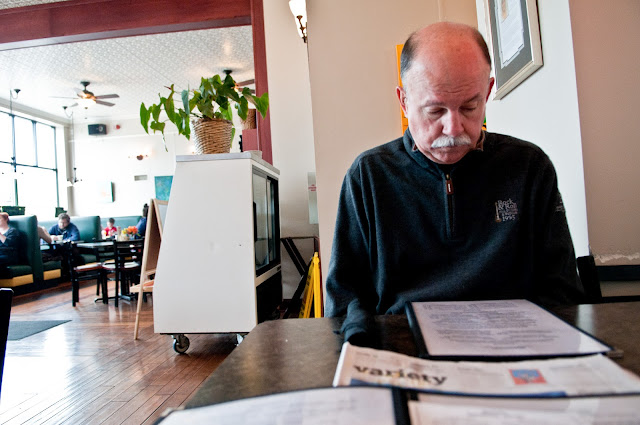 My dad took us out to the Lowry Cafe for breakfast. 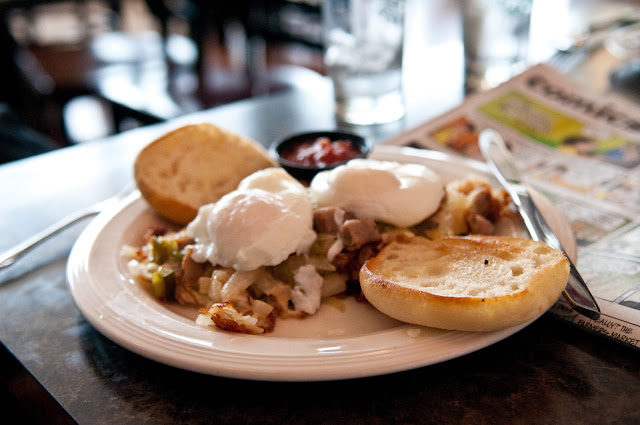 Scott had the ranchero skillet. 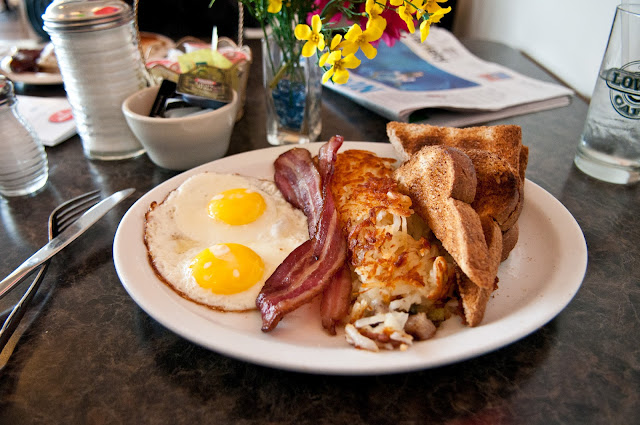 I got the Cleavland. A classic breakfast staple. 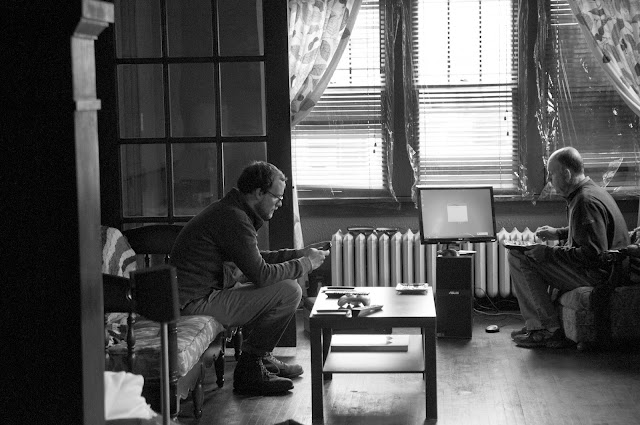 When we got up that morning I asked Scott if he could go the day without using his cell phone, computer, or TV. Coincidentaly it is Earth Day. He said he could do it. Minus the fact that his dad was here to fix their computer. After breakfast Scott got a text message after claiming that he "turned his phone off".

I though I had turned it off. I got a message from one of my coworkers. After that I put it down for the rest of the day. 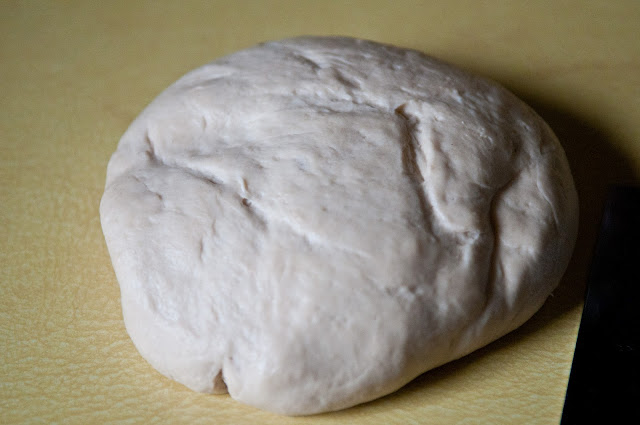 Today I was making baguettes. Scott made the pate ferment yesterday. I took it out of the fridge to warm up first.

Pate ferement is more or less a portion of the same dough made a day ahead to increase the flavor profile of a given bread. 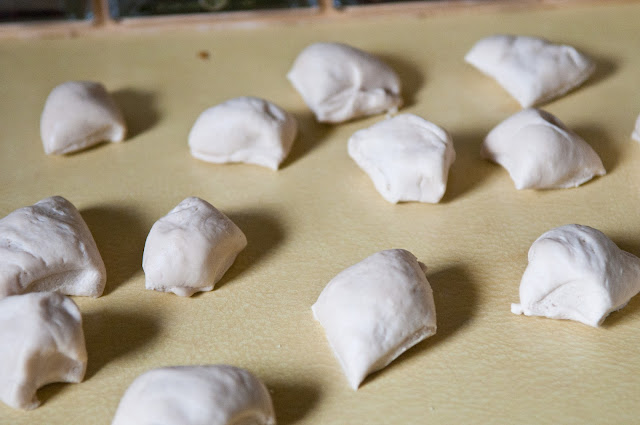 To speed up the warming I cut the dough into small pieces. 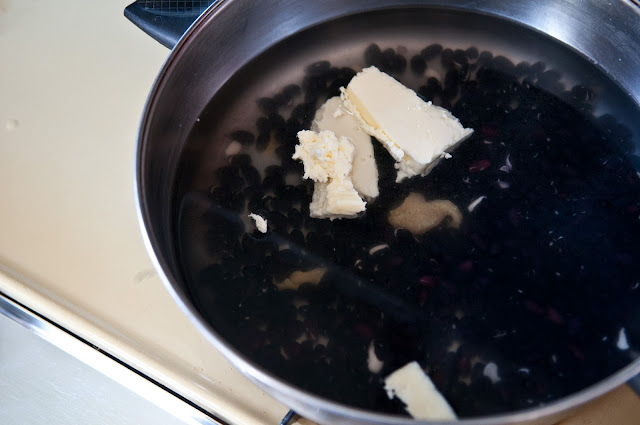 We also made some spicy black beans for dinner while we (and I mostly mean Brooke) were at it. 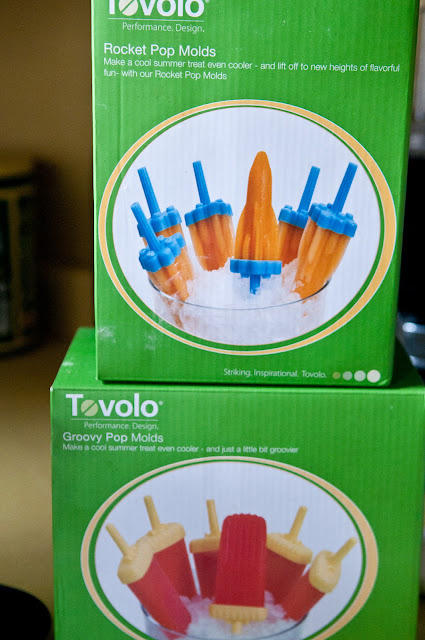 Scott has a sweet tooth like no other. Every day after dinner he asks, "What's for dessert?" On nights when I work late he'll make cookies. So part inspired by Emma's no sugar diet and part to eat less processed sugar I've been searching for good tasting sugar free options.

It was while I was going through cookbooks that I remembered I had a popsicle book. I noticed that most of the recipes don't use sugar, just fruit juice and honey instead. Today I decided to make the peanut butter and raspberry pops. It's supposed to resemble a pb and jelly sandwich. 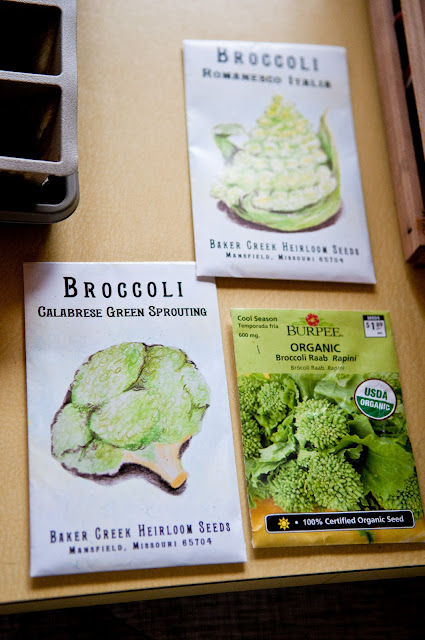 The last seeds I'm starting indoors are the broccoli seeds. Next week I can plant the cold weather seeds outside. 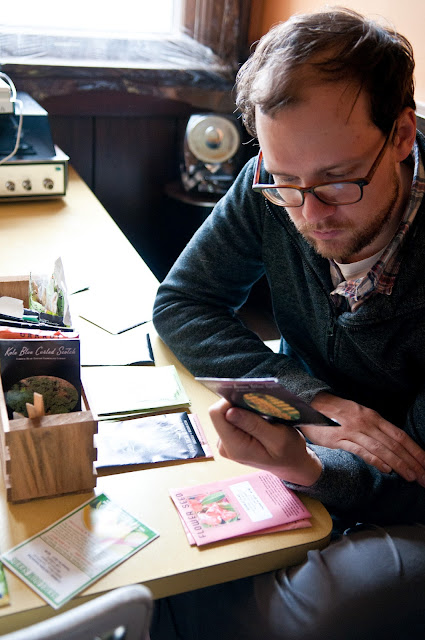 Scott sorted through our flower seeds.

I'm going to be planting them in the next couple weeks, just not sure where. I need to read up on all the flowers. It's a lot easier buying them from the nursery. My Grandma Wojcik had a epic yard full of gardens. I wish I would have learned her green thumb tricks. 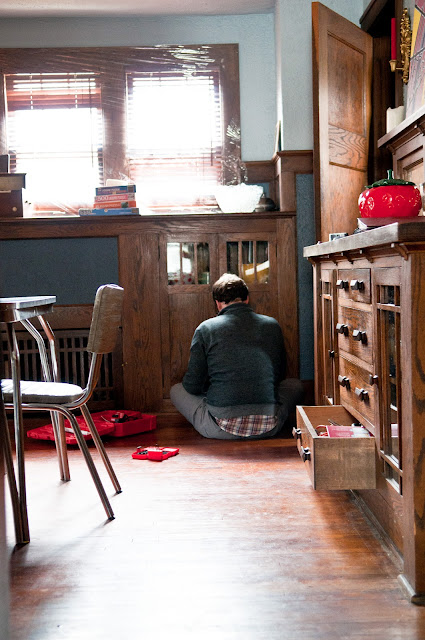 The no electronics for a day was a great idea. When there was down time Scott got antsy to do something. He finally put in door stops that we bought months ago. 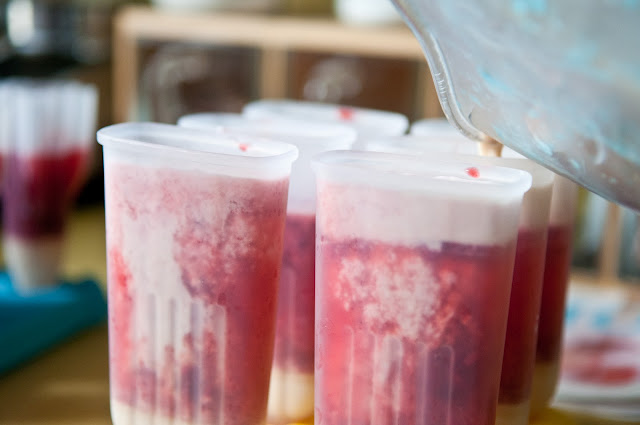 The Popsicle's had to be done in layers, taking all day to make.

We were a little impatient and unsure we wouldn't be able to stick the holders through so we got some mixing of layers. 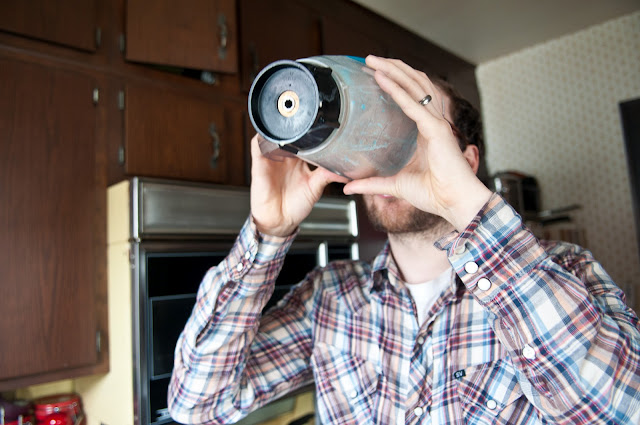 Scott drinks what doesn't fit into the molds. 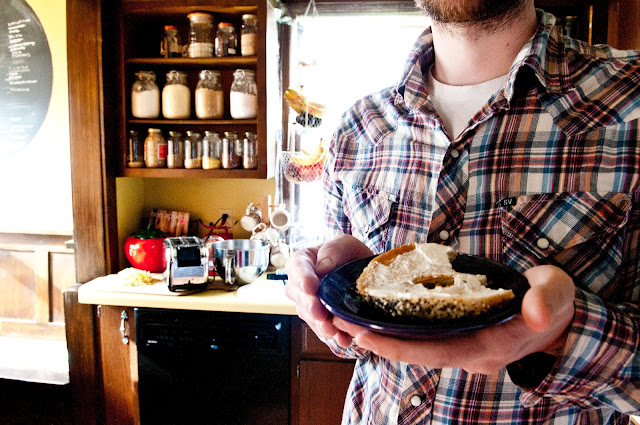 We were too full from breakfast to have lunch so we shared a bagel for a snack. 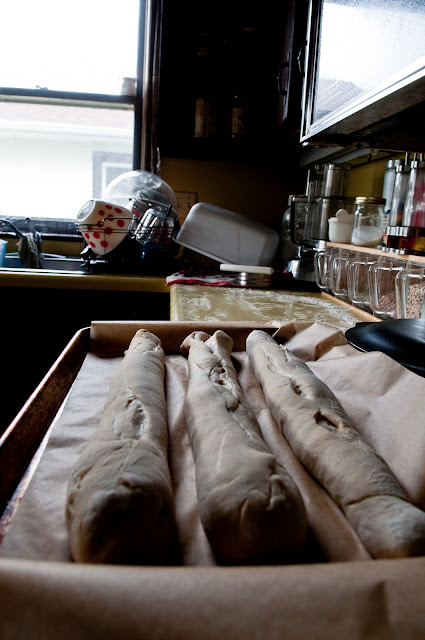 Brooke and I shaped the dough together just before putting the baguettes into the oven. 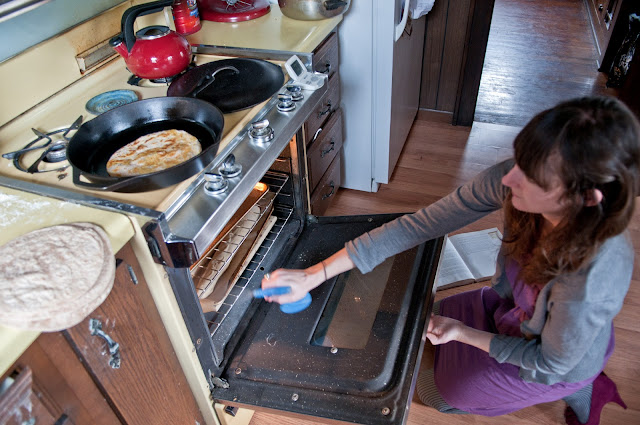 When making crusty breads you have to create steam in the oven. First you make a steam bath and then over the first minutes you spray the sides of the oven. 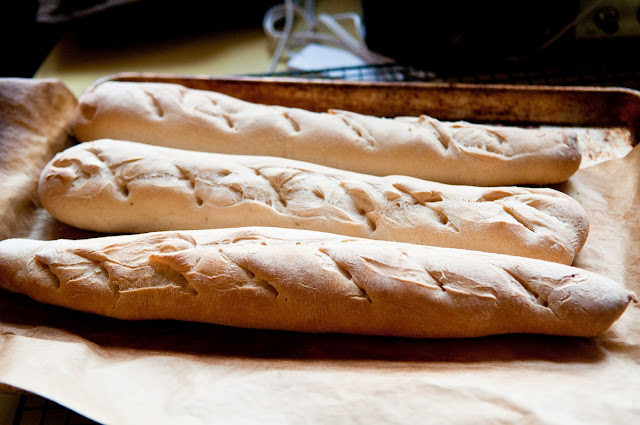 The baguettes cooked too fast on the bottom and didn't get as brown as I would have liked. 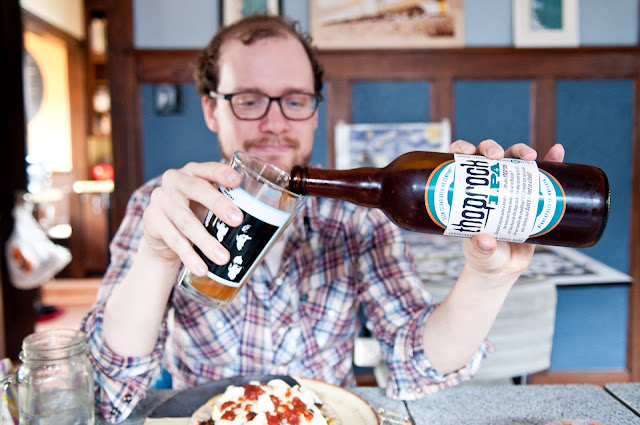 Meanwhile I was frying up potatoes, scrambling eggs and reheating the beans we'd made earlier.  Our huevos rancheros and Boom Island Brewery IPA reminded us of our favorite breakfast bar, the now defunct Dinkytowner. 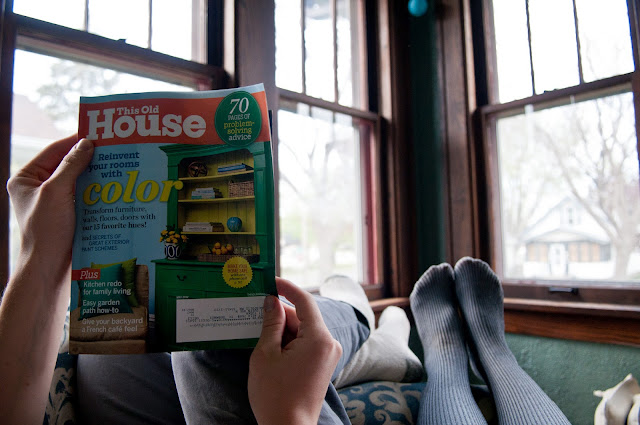 Then we looked at This Old House together. Normally Scott goes on his phone in another room while I puzzle, but today we spent more time together and talked more. I may have to enforce this rule every Sunday.

I think we spend more time together than the average couple either way. But it was nice for a relatively lazy day. 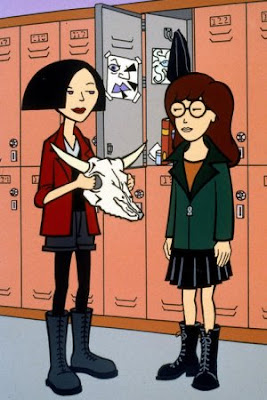 We did end the no electronics rule early to watch Daria. In the morning Scott said, "No TV, what about Daria?" I thought about it and realized we wouldn't be able to watch TV together until next Sunday so I said fine, but not until it gets dark out. 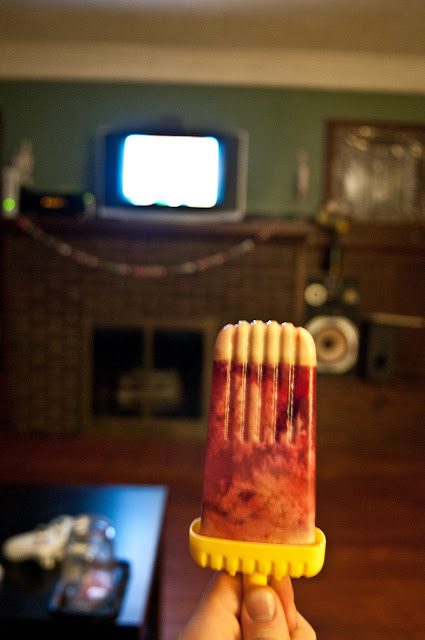 We ate our PB&J popsicles, watched Daria and I took this slightly blurry picture.

Amanda said…
That was a nice idea to not use the computer/phones for Earth day. I feel so lost when I don’t have my cell phone…unsafe too.
I like the groovy pop molds…very cool. What’s with you guys and Daria? I never liked that show. . .
9:49 PM, June 06, 2012