A Tire is Flat, Let's Shop

I got up pretty late today. I'd worked until well past ten and got home around eleven after we put air back in our right front tire of the Insight.

Our low tire pressure light comes on whenever it is cold outside. I ignored it since it always does that. On Saturday I noticed the front tire was looking a little lower than normal. I made sure we "aired it up" pronto.

The next morning it was once again quite flat.

Despite our need to get the tire patched or replaced, we still had plans for Sunday.

One year Scott's dad gave me a candy making set. It's basically a fondue pot that you plug in. It does come in handy for keeping chocolate warm for dipping.

We had to make some Oreo truffles to continue our month long Christmas cookie extravaganza.

(Scott just took this picture because of my Christmas pajamas.)

While Brooke melted the chocolate and mixed the truffle filing we had oatmeal raisin waffles. Brooke had wanted oatmeal, but I thought we could make a spin on that morning staple.

Then I called my pops and asked him a few questions about tires and checked out the flat.

Before heading out I went to the neighbors to borrow their pump so I could inflate the tire.

Brooke was busy with the truffles, so I headed out on my own.

The first place I had planned on going to was closed. I ended up dropping off the car at a tire shop downtown. Unfortunately they had to keep the car for two hours. In hindsight...

I meandered through the skyways eventually ending up at Macy's. I hardly ever go there, but it was a good place to kill some time. It was the perfect time to look for Brooke's Christmas present.

Scott called to say he had to wait for the car so I hopped on the next bus to downtown. On the way there I kept thinking, "Why do we have cars? Are they really more convenient?" Then I overheard someone on the bus talk about how much they wished they had a car.

Eventually I headed over to Barnes and Noble where Brooke met up with me after finishing the truffles.

I brought her back to Macy's to look at some nutcrackers and tree skirts. 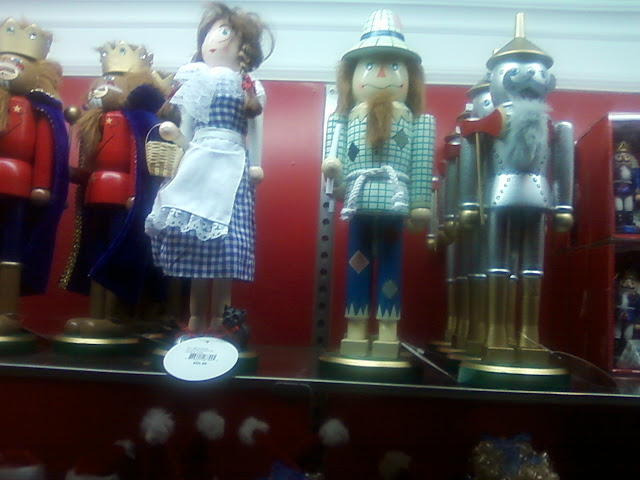 We picked up one of these nutcrackers.

It's become a tradition in our household to get a new nutcracker every Christmas. When we're 80 we're going to have quite a collection.

We were both hungry so we decided to go eat somewhere. Our first thought was Brit's Pub, but then I remembered Nick and Eddie over on Harmon Place.

With Brit's Pub on my mind I ordered the fish and chips.

I got a burger, which was good on a great ciabatta roll. It was good food at a reasonable price, though it wasn't as exciting as some people have made me believe. Perhaps going there late at night would be more entertaining.

During lunch the tire shop called back with the bad news. They couldn't patch the tire. I decided to take the car home on the donut and shop for new tires on Monday.

As I promised, we got a new nutcracker: the tin man from the Wizard of Oz.

We also came home to yummy-yummy Oreo truffles. So good!

Brooke is still working on her advent calendar.

Which means we also watched a movie. This weeks Sunday Funday movie was Pretty Woman. Not bad, but it hasn't aged well.

At 9:00 Scott was ready for dinner. I was still full from lunch.

He had leftover Soba Noodles with Spicy Cabbage.

While he was heating up that I heated up some Glögg. I really liked the taste. Scott said it was hard to drink even without any alcohol. I think when we run out of bottles I will try to make my own.

Amanda said…
love the Christmas pajamas!!
Teach me how to make oatmeal raisin waffles! Yum!
Those are the oreo balls that I make every year.
I think it’s funny that you have one of those cat clocks!! It looks just like peanut.
1:52 PM, December 18, 2011

I really like that design that "Accepts Affection" posted. Maybe if I had Tshirt of it I could finally make peace with all the folks in Duluth.
11:28 PM, December 20, 2011