Orange or is it Gates of Gold?

Once again I worked an early shift at the BBY. I was half-way done with work by the time Brooke had breakfast. 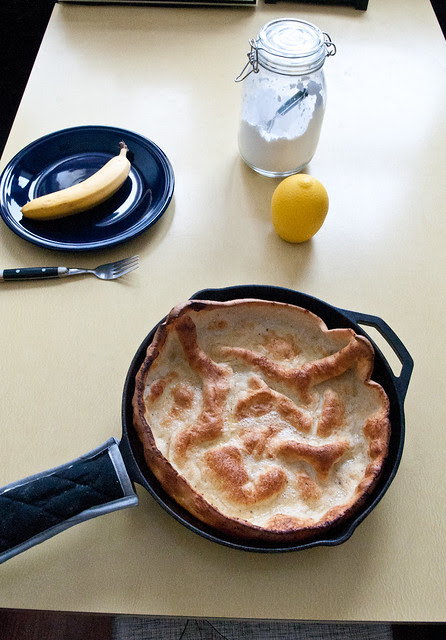 I was sick of eating boring old oatmeal alone. I want my Sunday Funday's back! So I made myself BIG pancake.

I can't believe she made this without me. 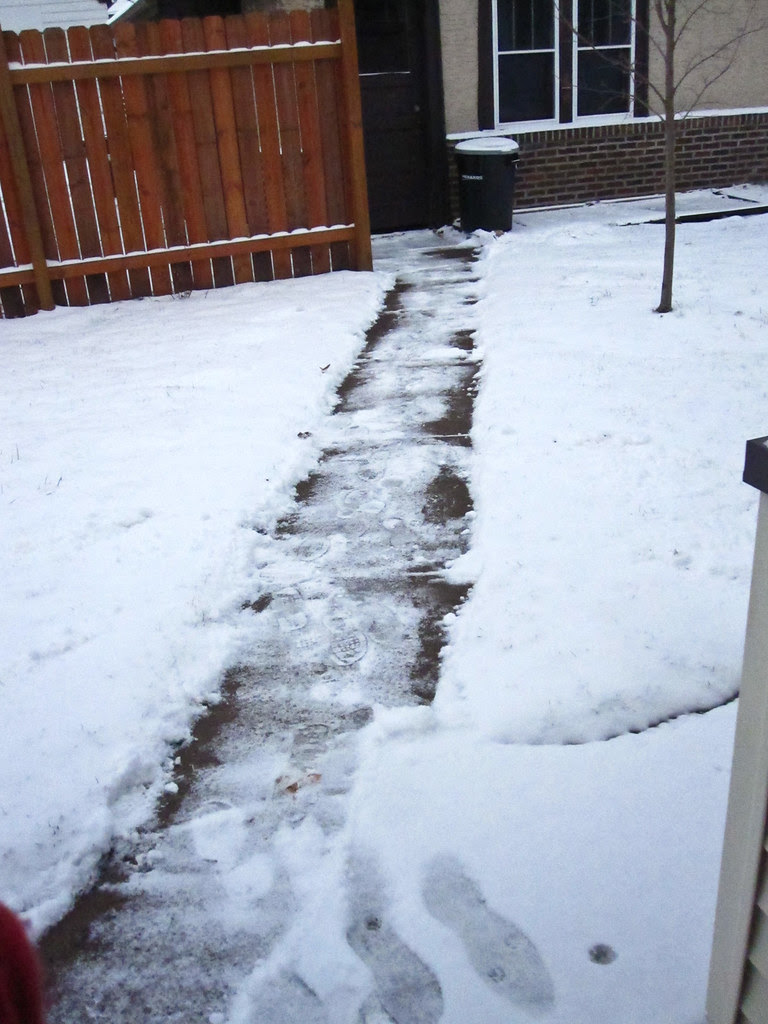 Yesterday we got our first snow of the season. 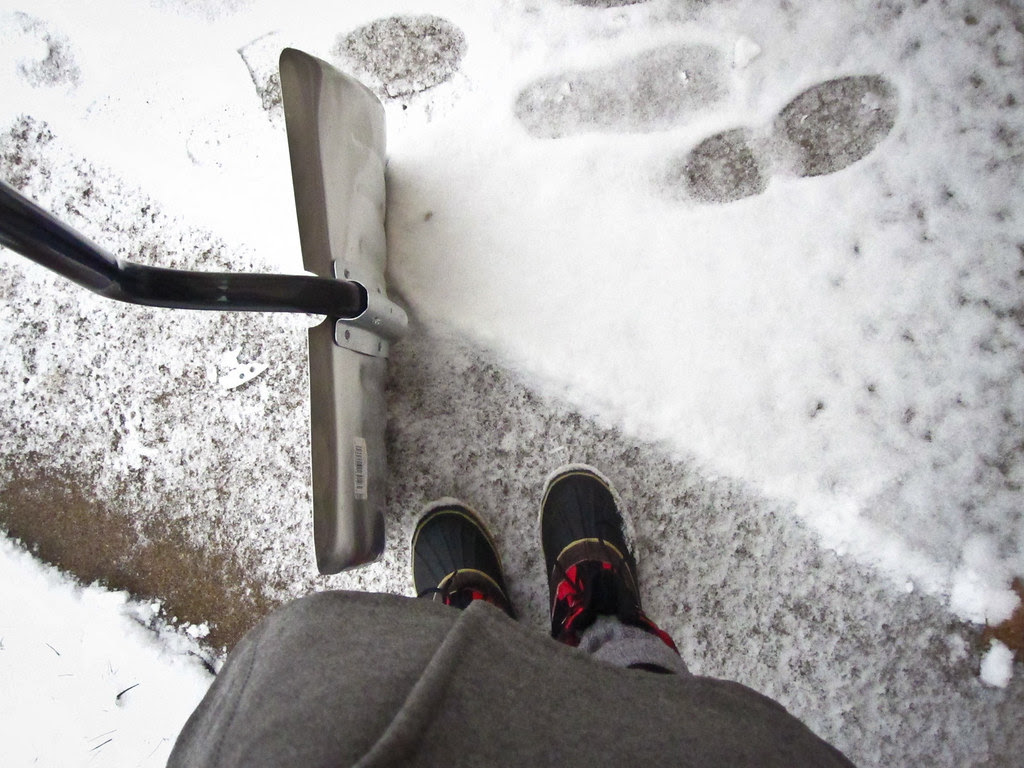 Luckily it only snowed a couple inches so shoveling was quick. 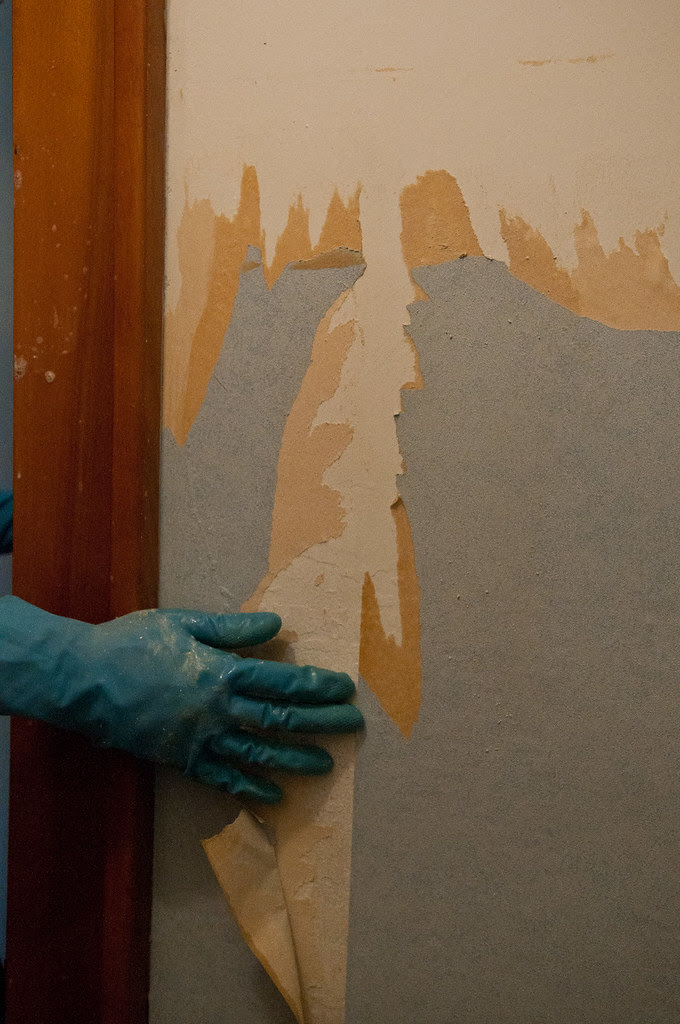 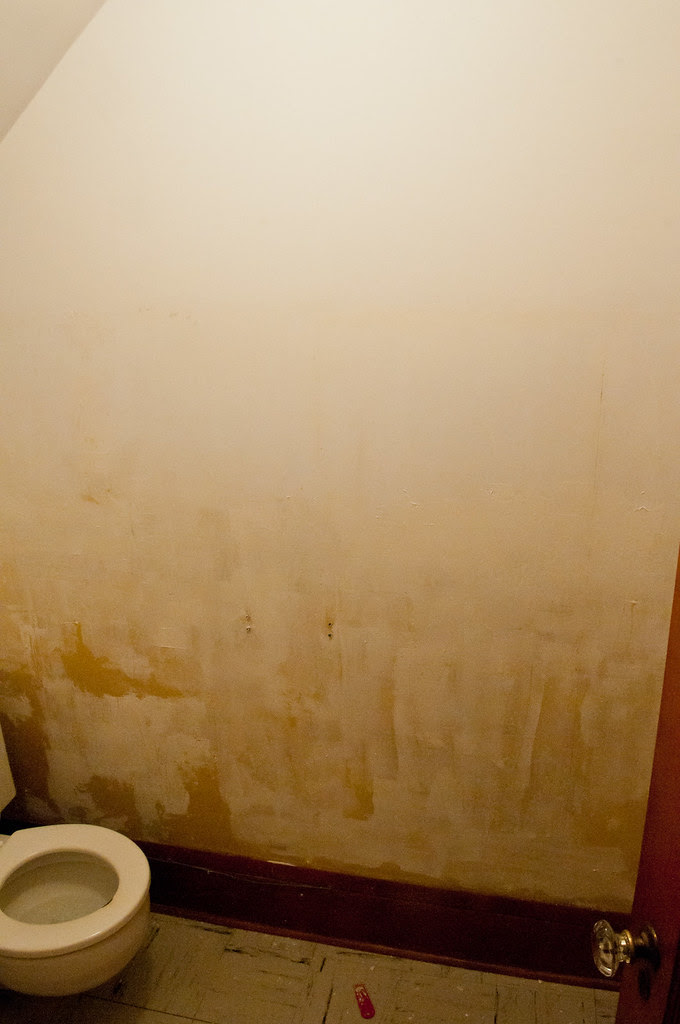 Earlier this week Scott tore off all the wallpaper in the upstairs bathroom. 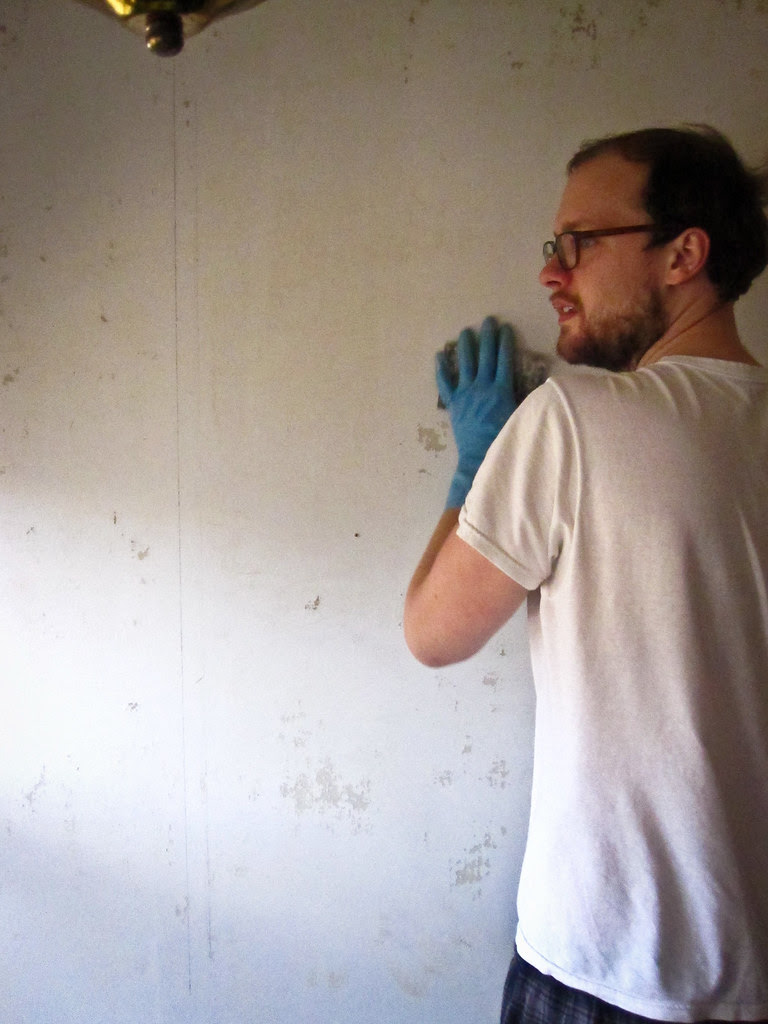 Then he got rid of the wallpaper residue in the breakfast nook. 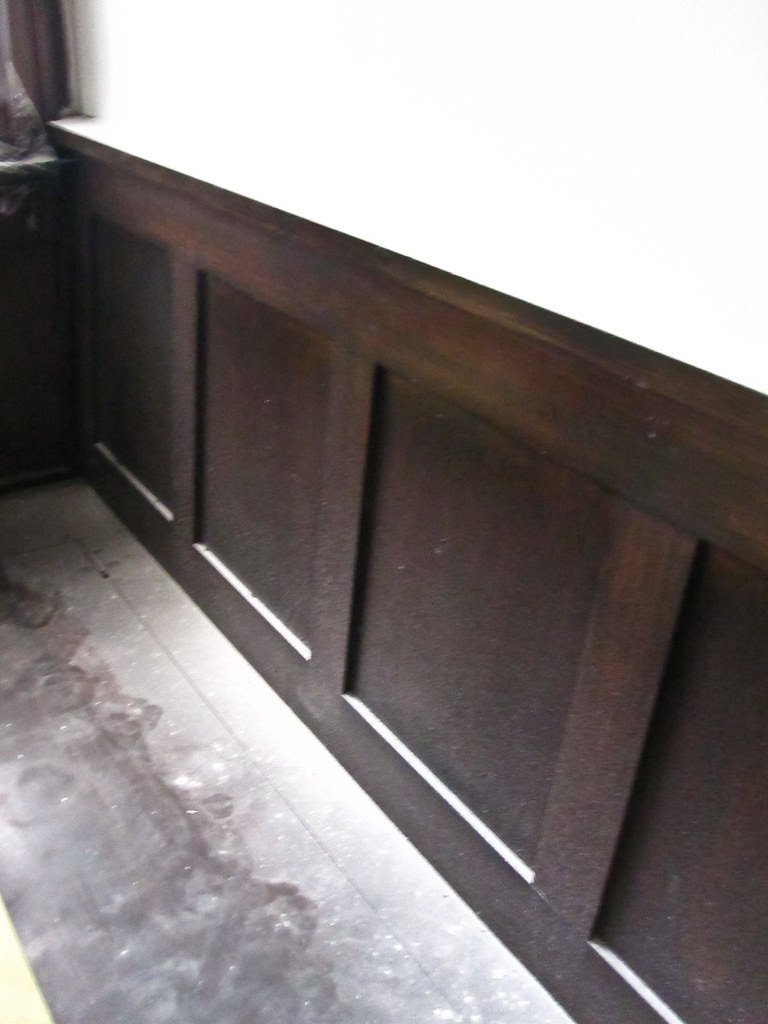 Then he spackled all the random gaps and sanded it all smooth.

This is the wallpaper that was there before we took it down long ago. 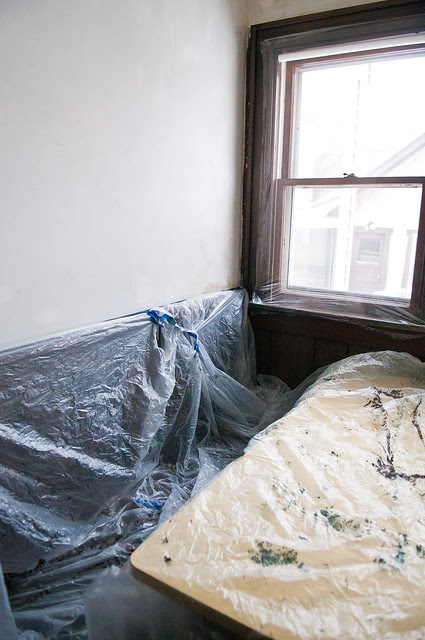 I taped down the plastic to get ready for painting. 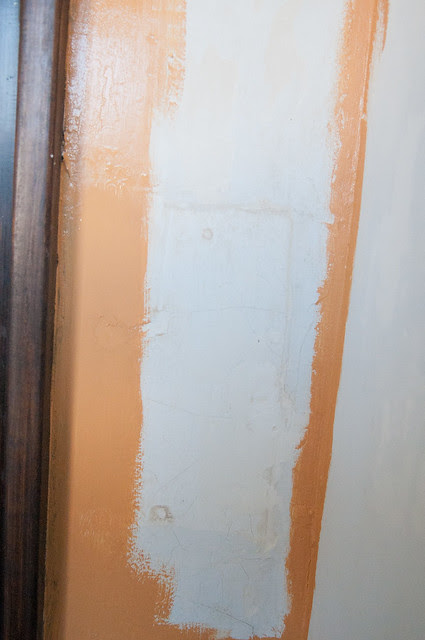 On one wall it appears there was something here before they wallpapered in the 70's. I'm guessing a phone? 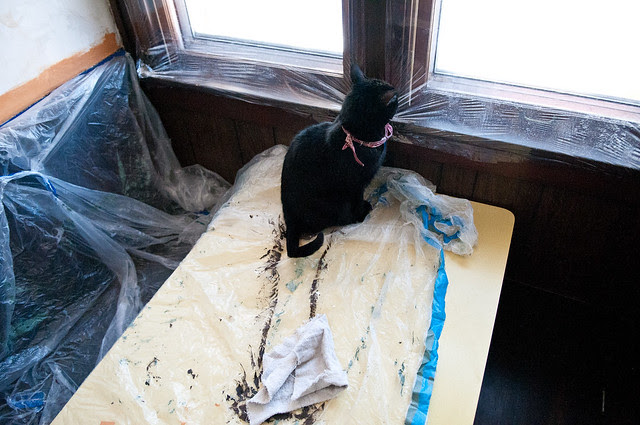 Peanut made sure I did a good job. 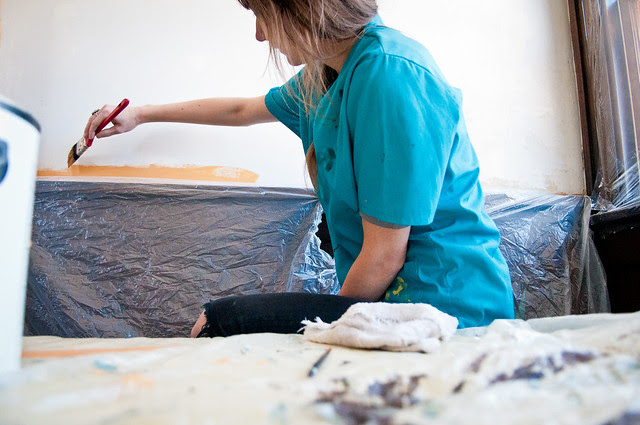 I came home to Brooke painting. 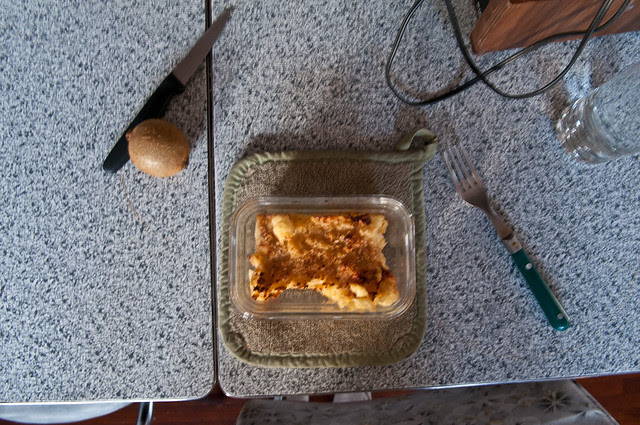 When Scott returned home I took a break for lunch. Creamy cauliflower mac and a kiwi. 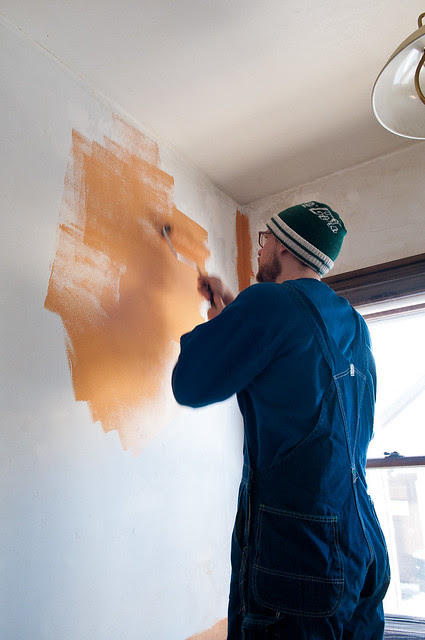 Since I was painting I put on the obligatory overalls. 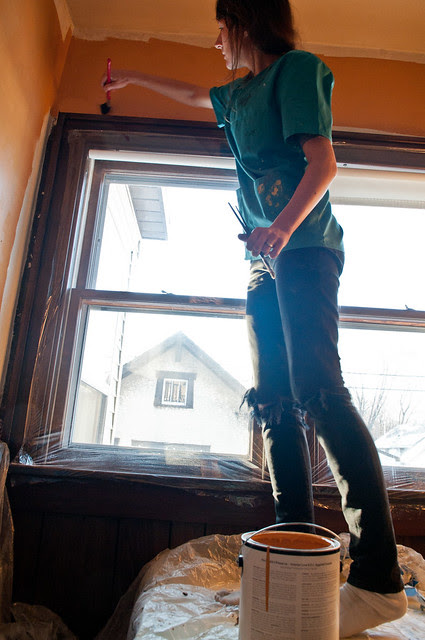 I wore my obligatory painting scrub. 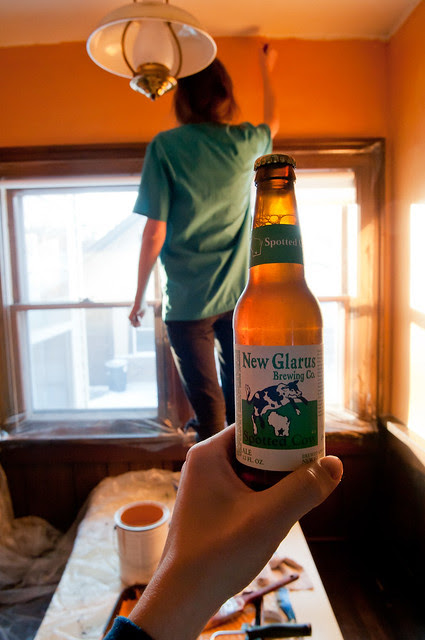 We still have a few Spotted Cows left over from the wedding. Since I had been working since 6 am and I had finished painting the first coat, I obliged myself to a breweski.

Actually I think his words were something about being a husband and deserving a beer. 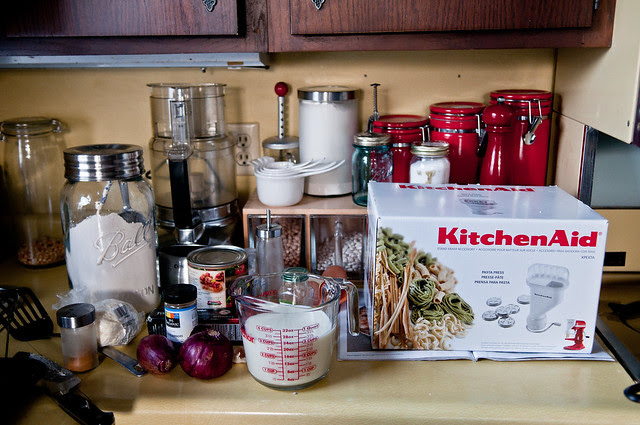 I started dinner early because I was going to make Bon Appetit's  Moroccan-spiced Pastitsio completely homemade. The recipe called for penne, but I replaced it with homemade rigatoni so I could use the pasta extruder that my sister-in-law's got us. 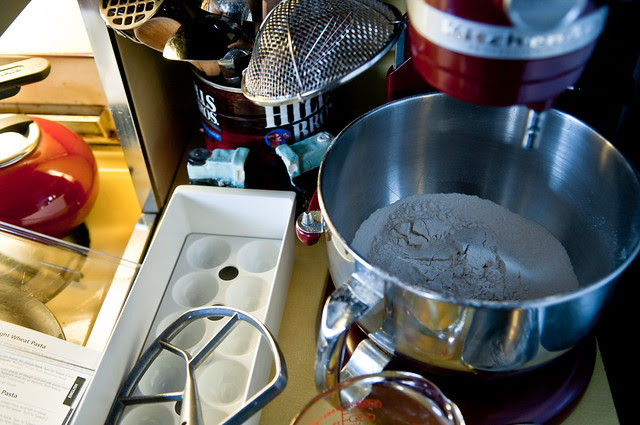 Instead of asking for a certain amount of eggs the noodle recipe asked for a measured amount. Because the four eggs came up a bit short I added water per the recipes directions. 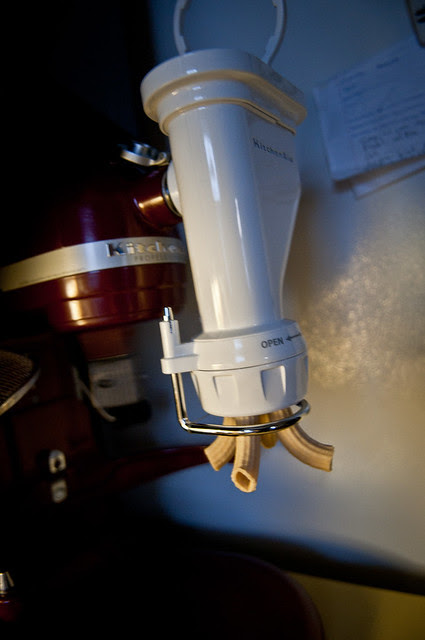 The dough turned out perfect. This is the third time we've used the attachment and the third kind of dough we've used. The whole-wheat dough I used for bucatini was a bit dry and the spinach dough Brooke used was too wet. 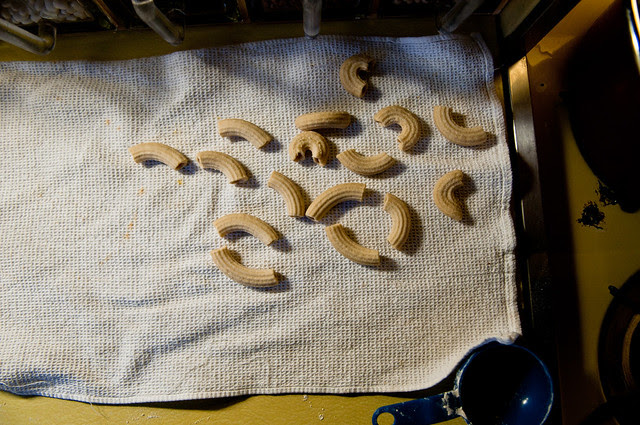 It appears that the simple egg dough works the best. Look at these perfect shapes! 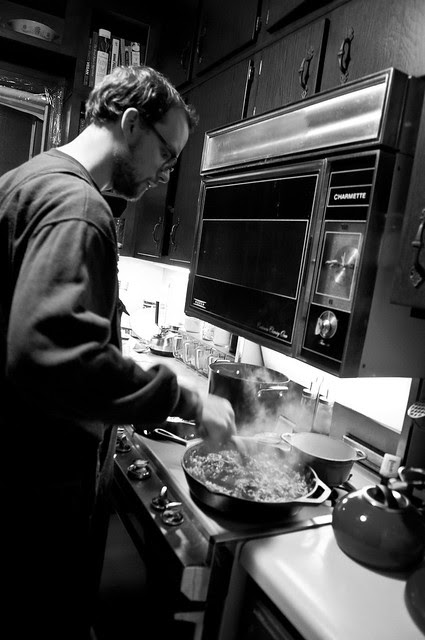 Brooke came down to see what I was doing an hour later. At this point I had four pots going: one for the ragu, one for a bechamel, another for hot milk and of course the noodles in the big pot in back.

While he was slaving away in the kitchen I was working on a Christmas project for my mom. 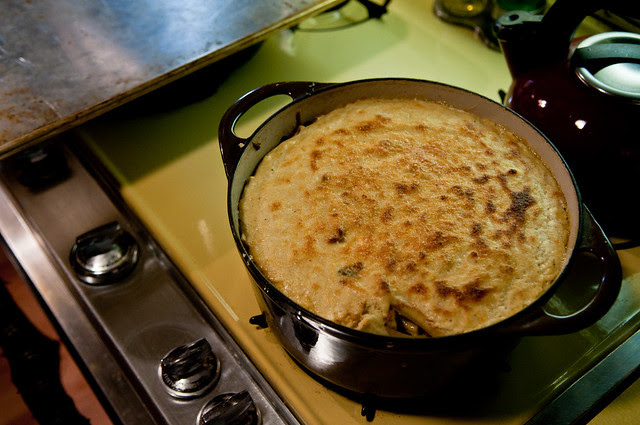 The recipe tells you put the pasta down first, then add the ragu, then more noodles and finally the egg-y feta cheese bechamel topping. 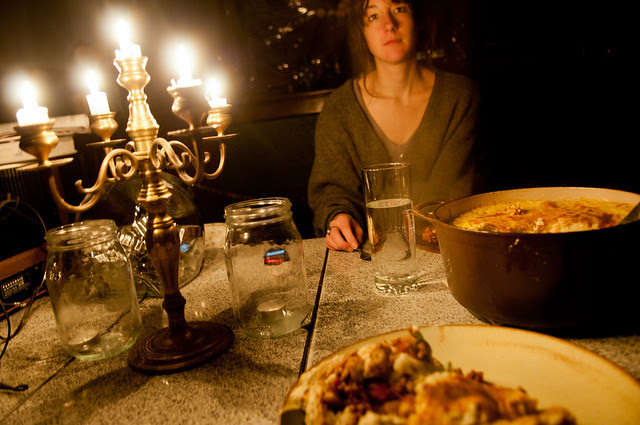 I made this back in March, but Brooke had no memory of it (thus the blank stare). I forgot to add tomato paste and we were out of dried mint, but it turned out wonderfully. The noodles and the bechamel were so good.

It was very delicious. So proud of my little chef. 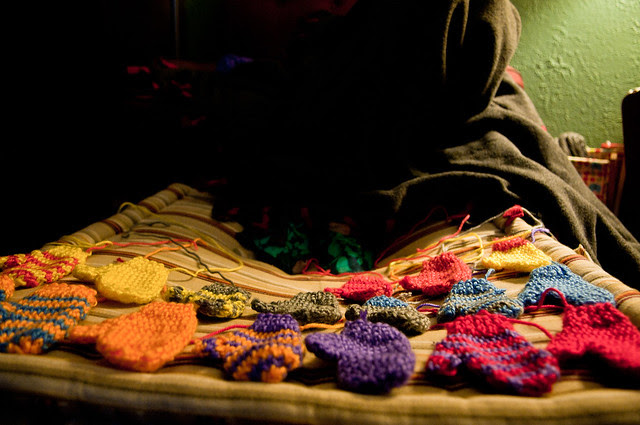 I have been working on an advent calendar for a year now. I had plans to have it finished last year. Here's hoping to getting it done on time this year.

After dinner we watched our recent Netflix dvd while I knitted. I'm a fan of Katherine Hepburn so I knew this was going to be good.

I'm not a big fan of classic rom-coms, but this movie was very good.

Amanda said…
The pancake looked great.  Wow you guys can make your own noodles now? You should make some homemade alfredo now and Jeff would be over in a jiffy. :)

I think you two should start your own show…or write a book. You know so much about the kitchen and doing things yourself.