By Scottie and Brooke Tuska November 28, 2011
For the first time in a long while Scott and I had the whole day off together. 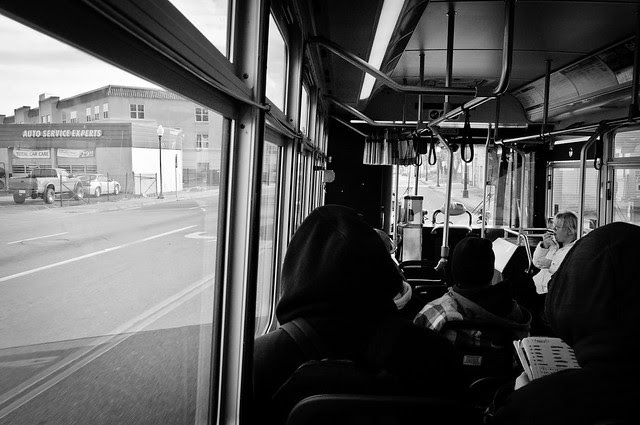 We were going to bike to downtown, but it's already pretty cold outside so we took the bus.

I've really been a wuss this year when it comes winter biking. In fact, it's not even winter yet and the bus has become my primary means of transportation. I figure that between the nine months of biking and three months of taking the bus I save a lot of money. 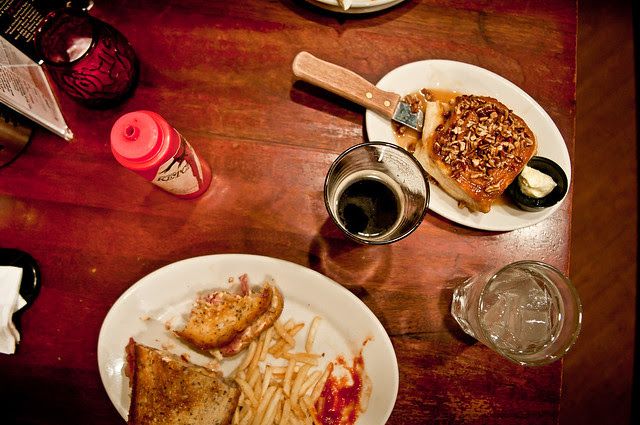 We decided to eat at Hell's Kitchen, one of our favorite breakfast joints in town. Since it was already well past noon I had lunch instead. Brooke of course always eats breakfast before lunch.

For what seems like the millionth time, we got one of the "worst seats in the house." We love sitting there because you get a free carmel roll. Everything is made from scratch at Hell's, so you know that they have "damn good food." 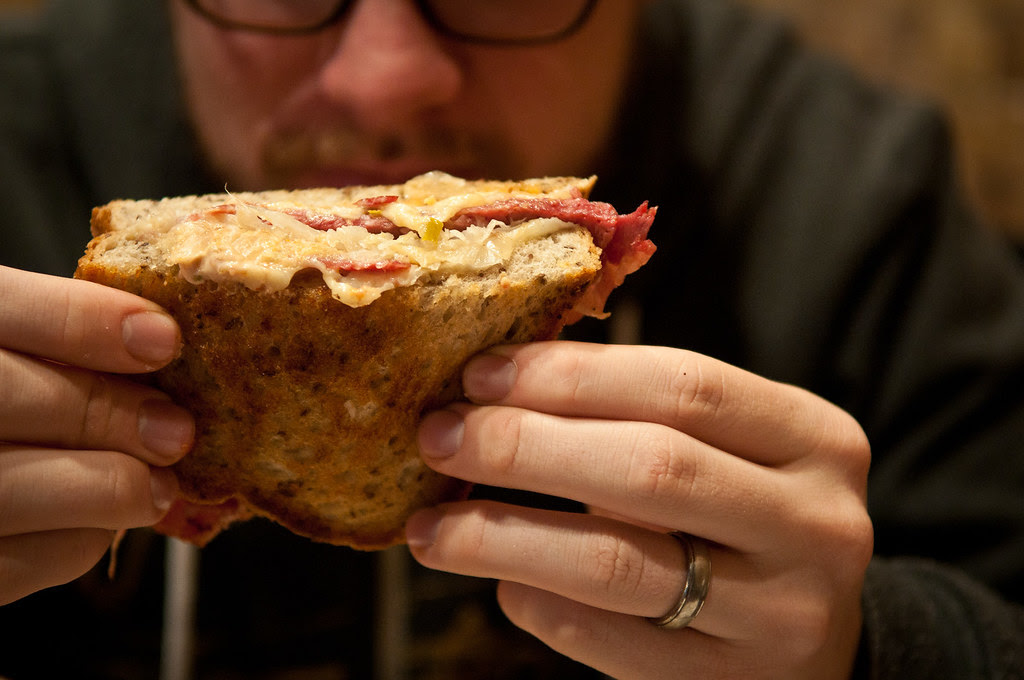 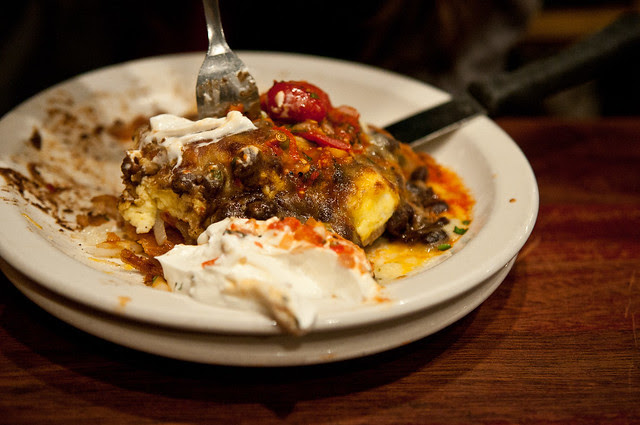 I got the huevos rancheros.

These are what I normally get, but I let Brooke have the huevos this time. 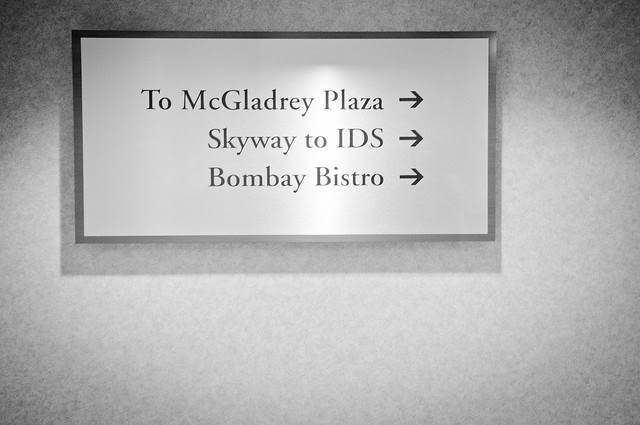 By my standards it was cold outside, so I suggested we take the skyways instead of walking outside. 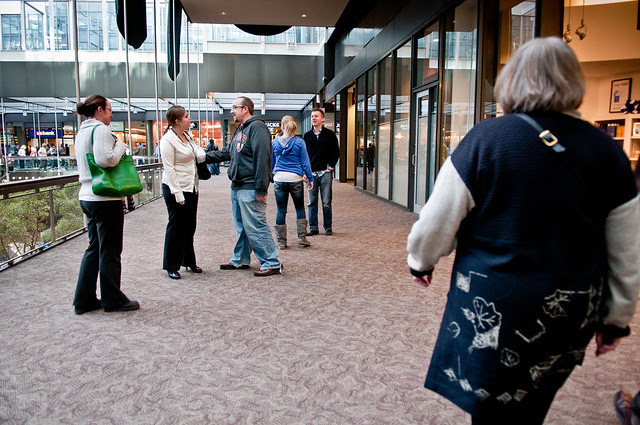 Some parts of the skyway are pretty claustrophobic, but the IDS tower crystal court is opulently spacious. Maybe I should start a photo project on the skyway. I need something to fill up my boring winter days off. 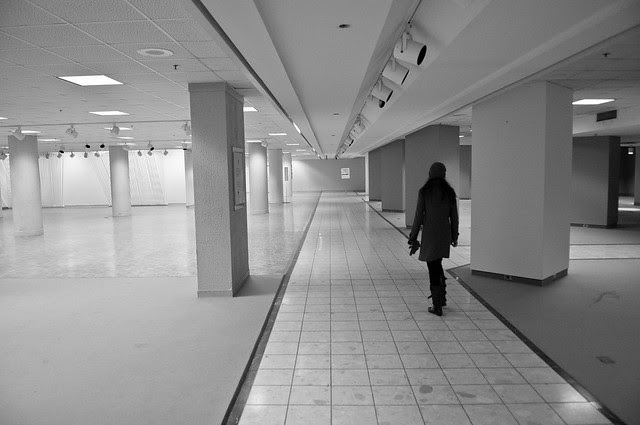 We then headed up to the 8th floor of Macy's to see the Christmas display. Most of the floors above the 4th are vacant or used as offices. I think the display is called "A Day in the Life of an Elf" or something like that. Apparently when Dayton's and then Marshall Field's occupied the department store the display changed every season. Now it looks like its going to stay the same for indefinite future, no thanks to Macy's. Nonetheless it was very charming and my first visit to the display. 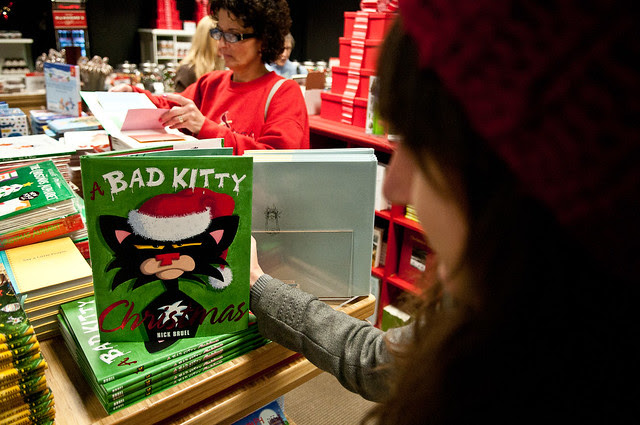 A quick homage to Peanut. 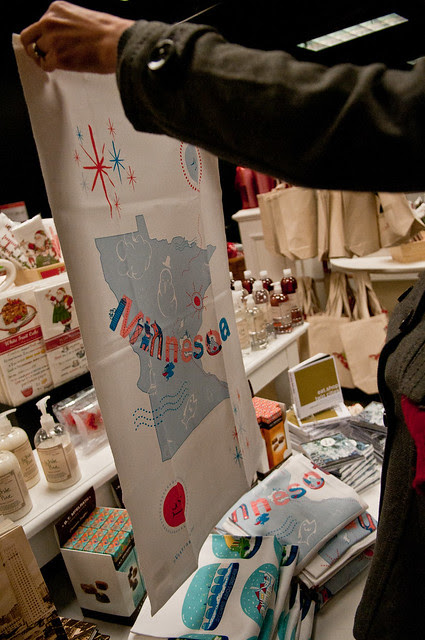 We always gravitate to things that are Minnesota or Wisconsin themed. Maybe we should make my office the Wisconsin room. 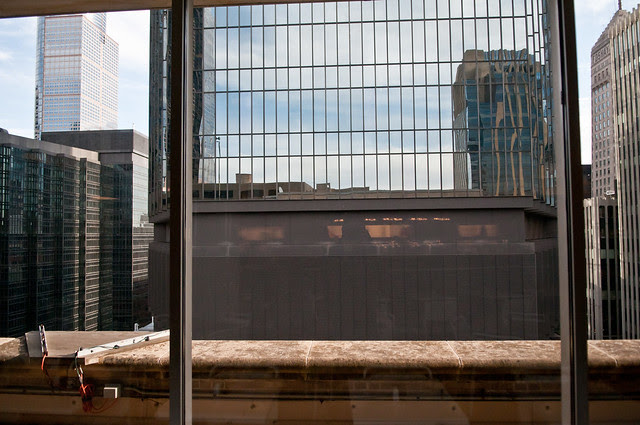 I took Scott up to the 12th floor where there is a restaurant and cafeteria. There's lots of windows to see out to the city.

Unfortunately it doesn't make for the most interesting pics. 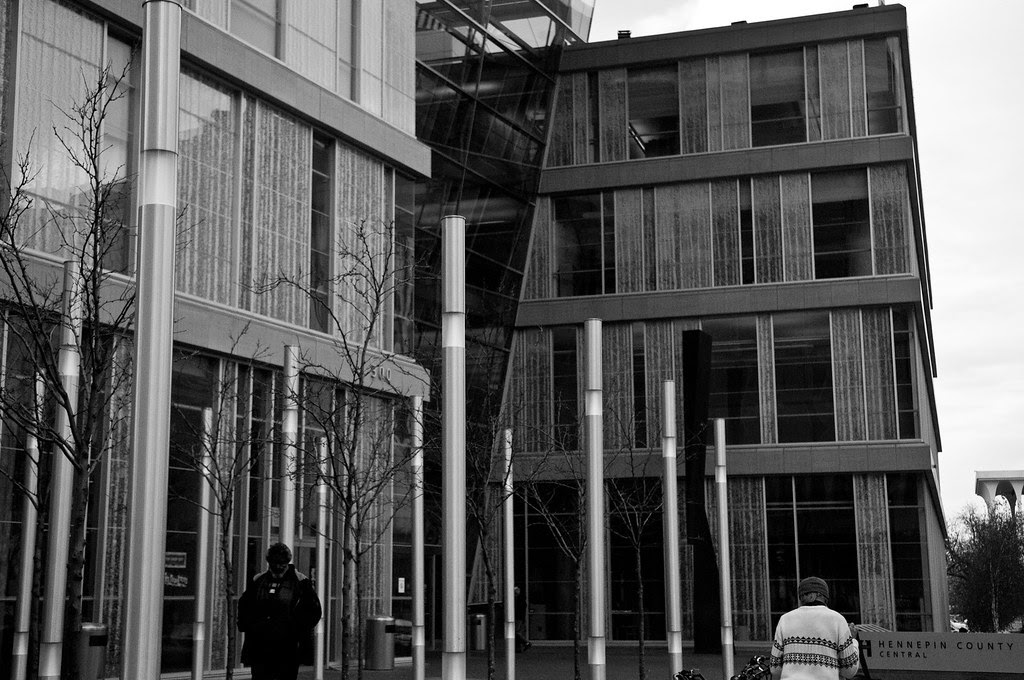 Scott wanted something new to read so we headed over to the library. 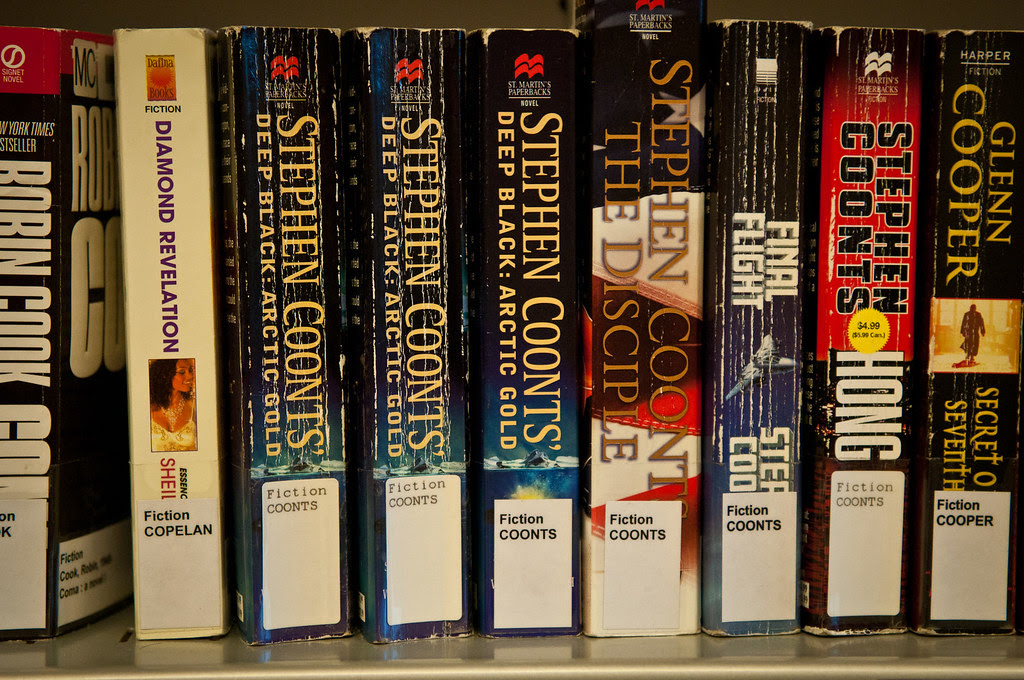 He couldn't find the book he really wanted.

I was looking for the companion piece to World War Z. It was out of stock. 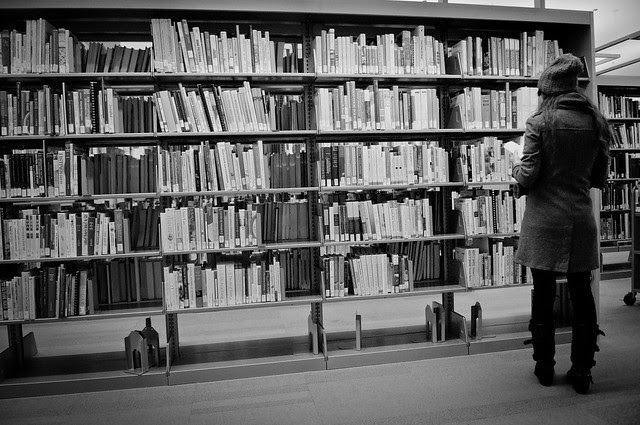 I decided to get the sequel to the book I am currently reading, What Einstein Told His Cook 2. 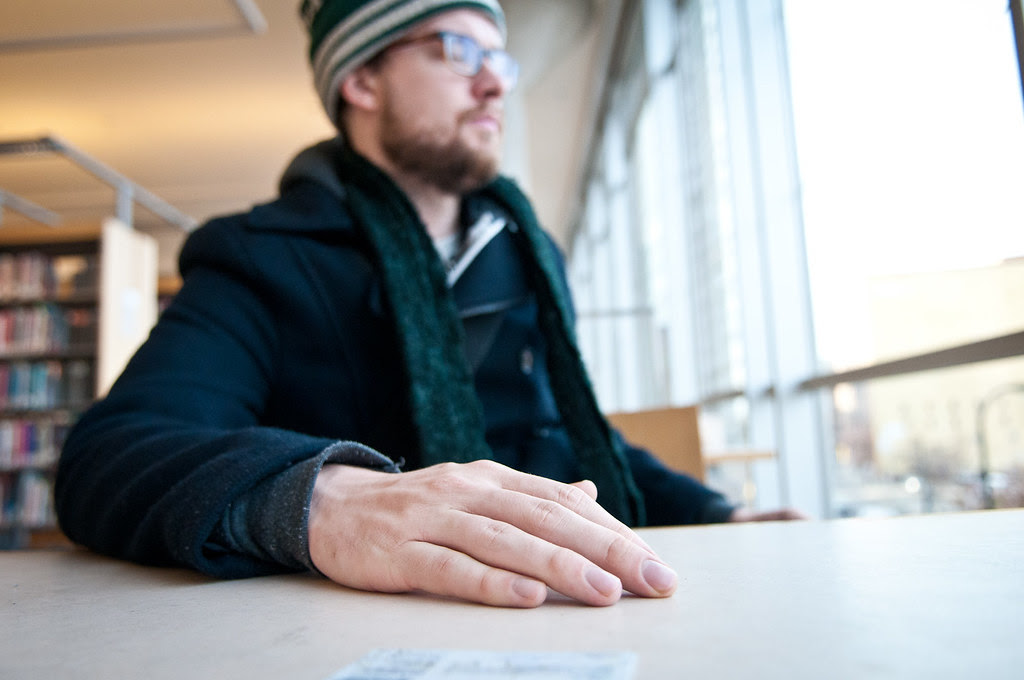 Somehow this made me tired. 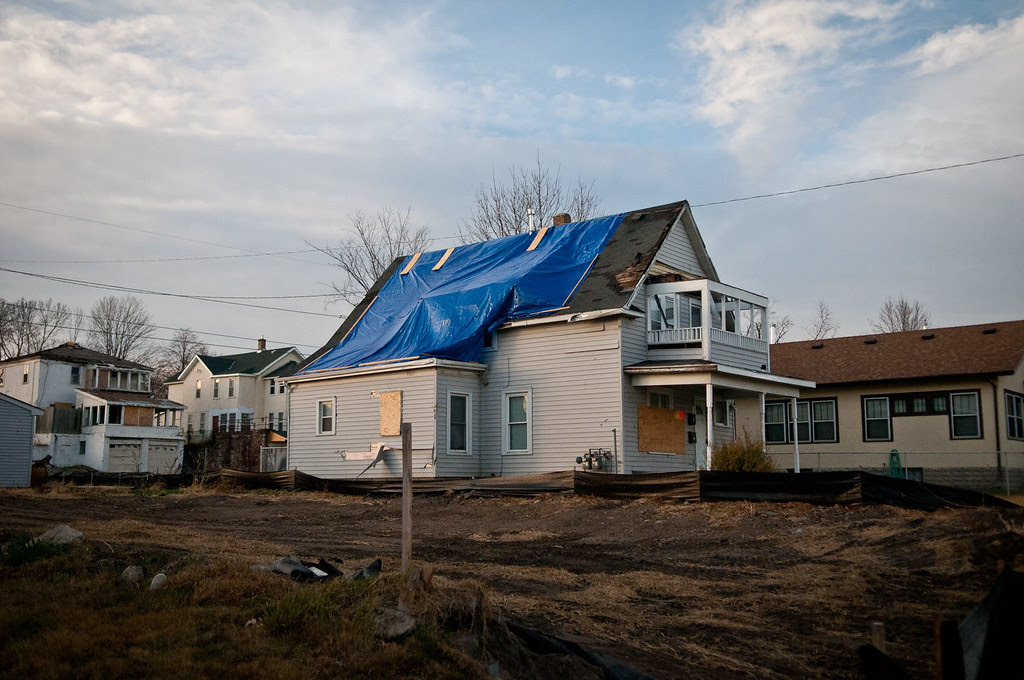 Our bus dropped us off a few blocks from home. We walked through the tornadoes path on the way.  It's really sad to see homes that still haven't been repaired or have been torn down six months later. 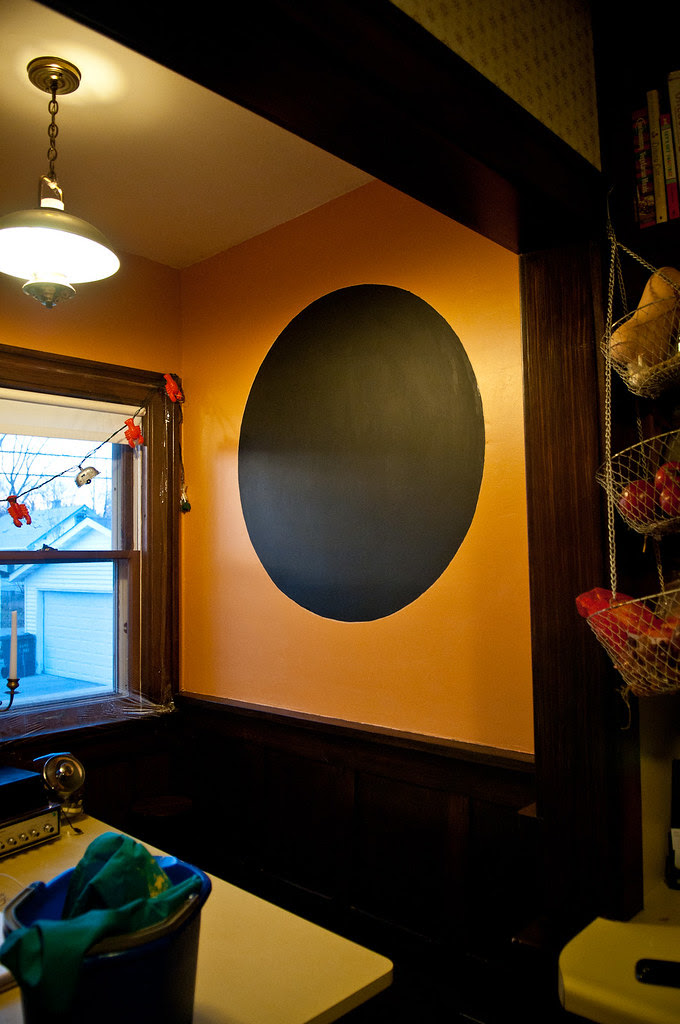 A few days earlier I painted a circle chalkboard in the nook. It's a lot harder than it looks to make a perfect circle. I'm pretty excited about this, we've been wanting to do this since we took the wallpaper down. 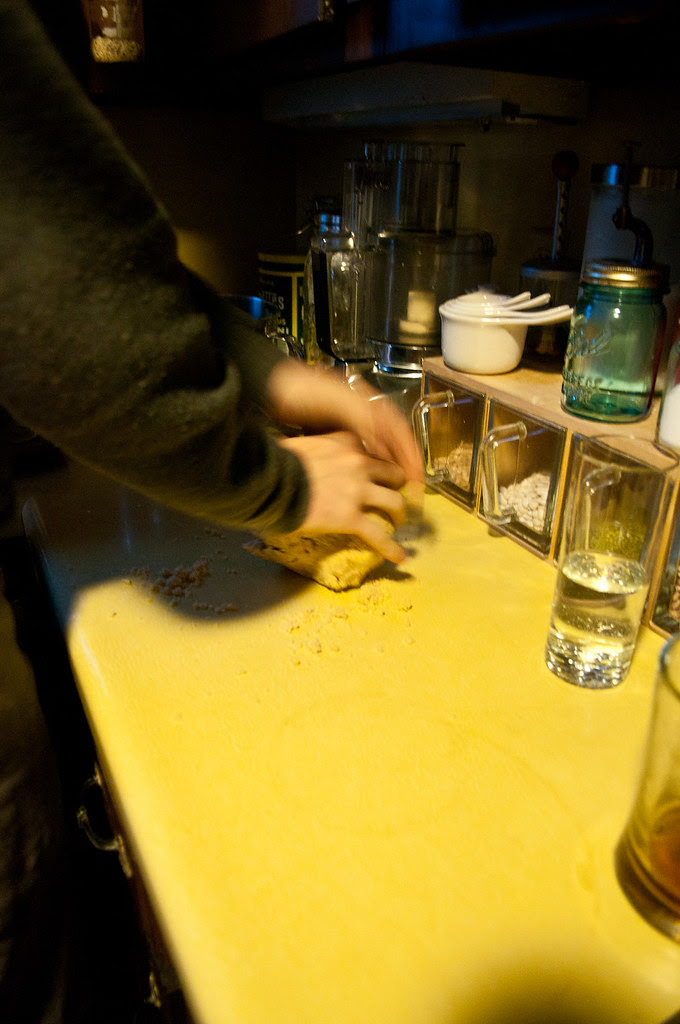 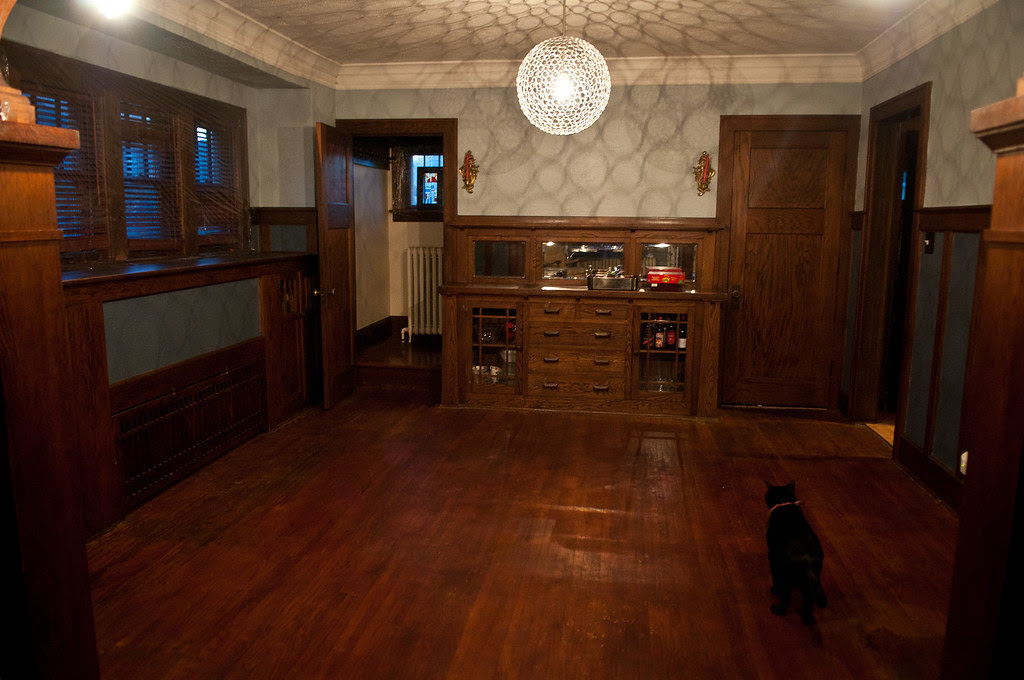 At the end of the summer (August 1st to be exact) during a heavy rainstorm it started raining in our dining room. Water had gotten in through a hole in some caulking (where the roof meets the dormer). We believe the cracks were caused from the tornado. Finally after waiting forever for the insurance to go through we are able to get the water damage repaired.

I took everything out of the dining room to make room for construction. (And so we can have a disco party later.) 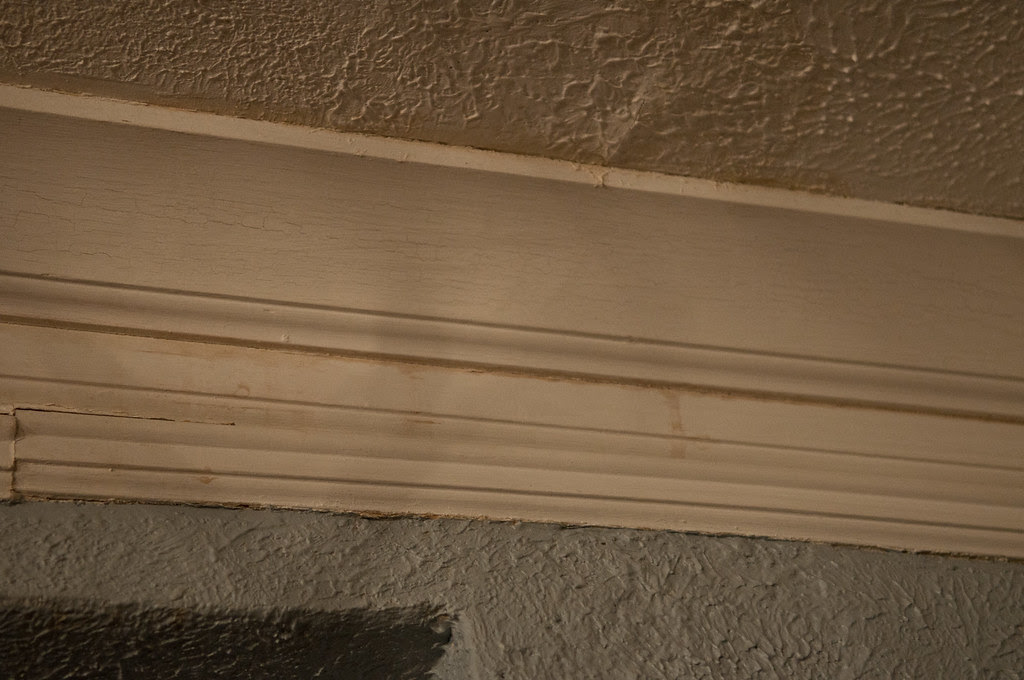 I remember being very freaked out when this happened. It had been months since the Tornado, but it was the first really bad horizontal rain storm. The street out front flooded. Steve, our stucco and plaster guy, re-caulked the problem spot and we haven't had an issue since. We just had to wait for the insurance company to get the money to us. Thankfully it was all a part of the tornado claim, so we only had to pay one deductible. 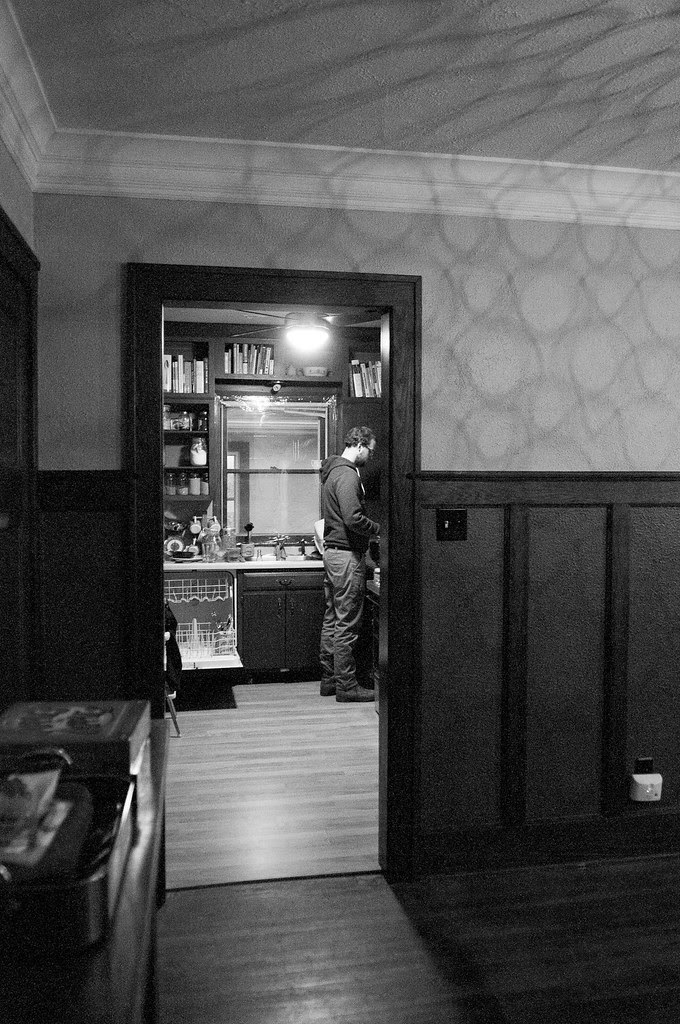 Construction was to begin tonight so we prepped dinner to bring over to eat at Tyler and Emma's so we were not here while our guy is working. 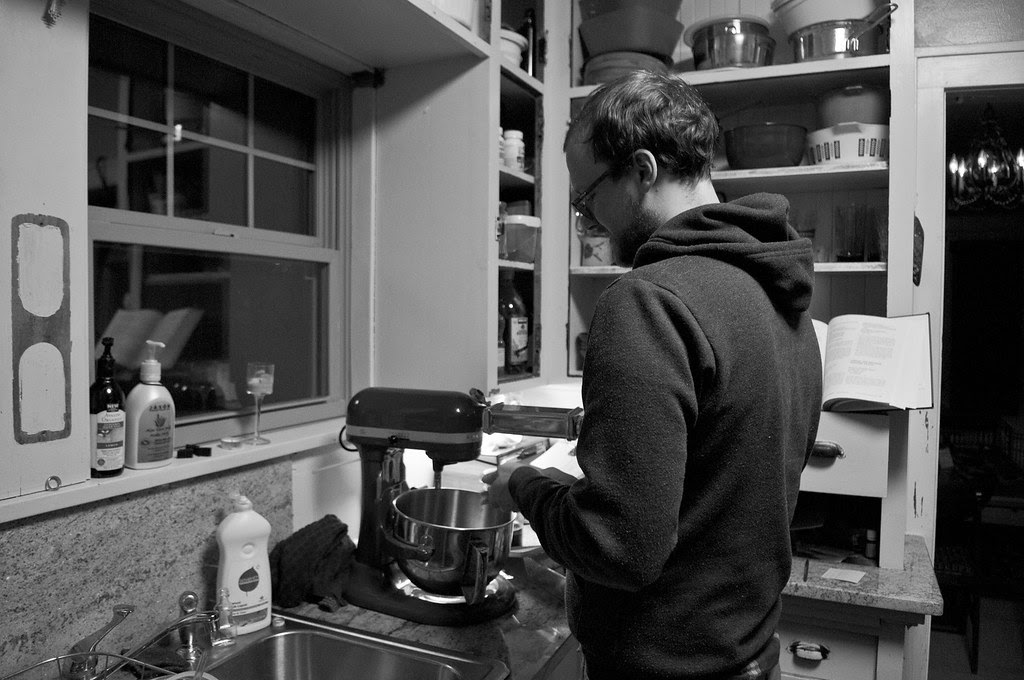 We went to their house to finish making Scott's famous spaghetti and meatballs.

All you need to know is that any good meatball is approximately 3 parts meat to two parts bread crumb (or crackers) and an egg. From there you can add any spices and herbs you desire. 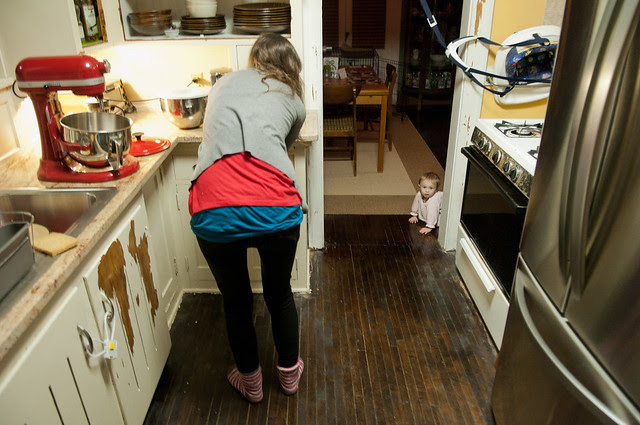 Olive decided to creep around the corner. 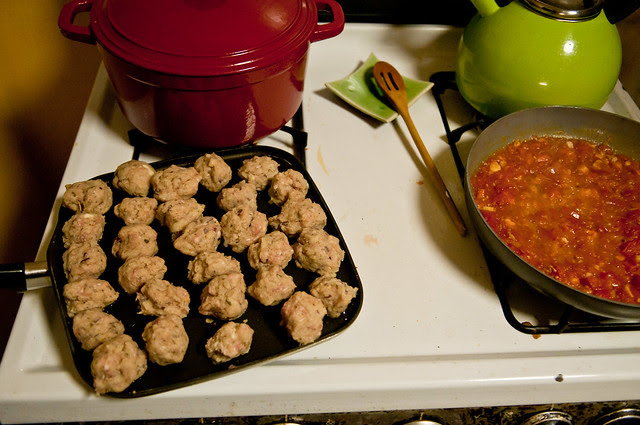 We didn't have a big enough pan to fry the meatballs. I used a griddle instead. 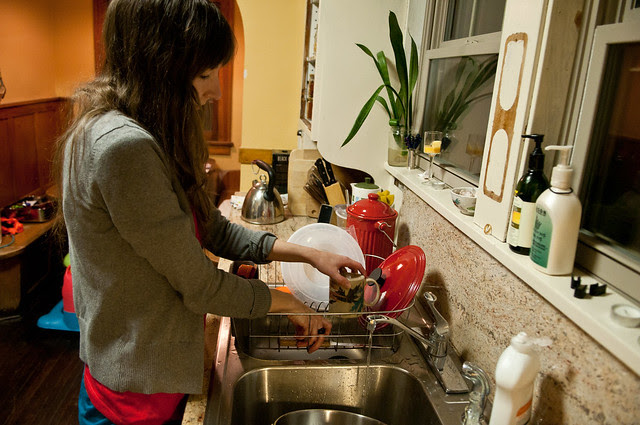 Brooke even loves doing dishes at our friends' house. 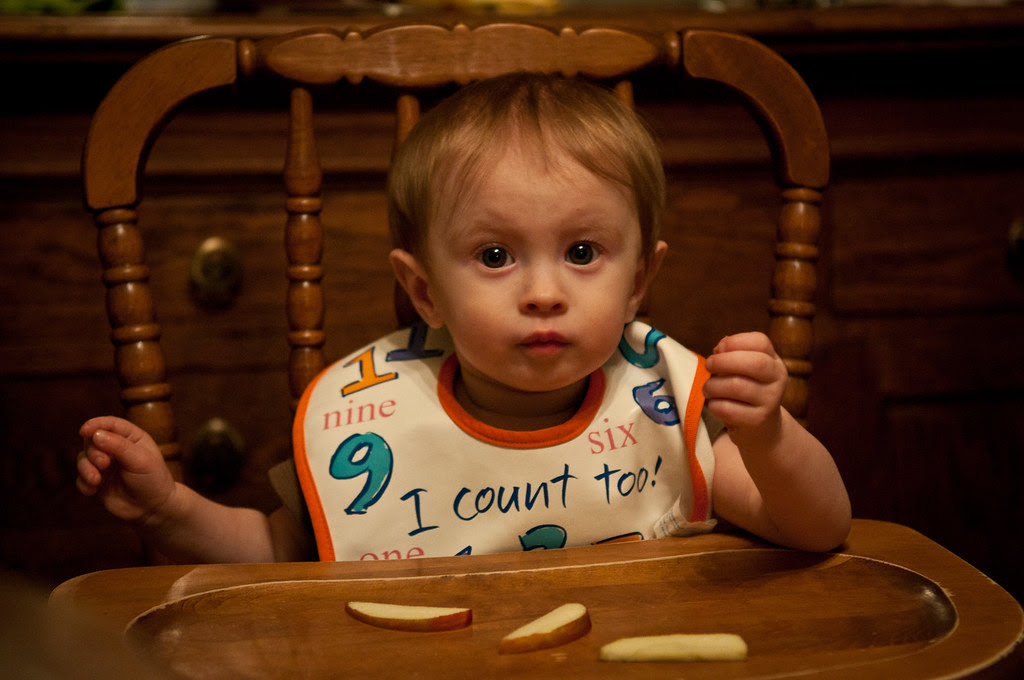 Olive joins us for dinner again. Dinner's much more entertaining when there's a baby to watch. 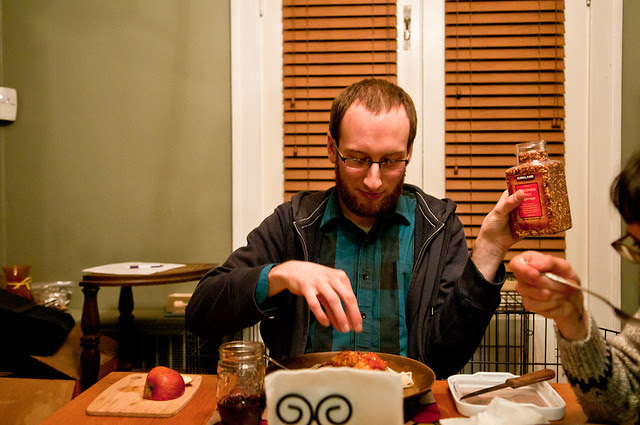 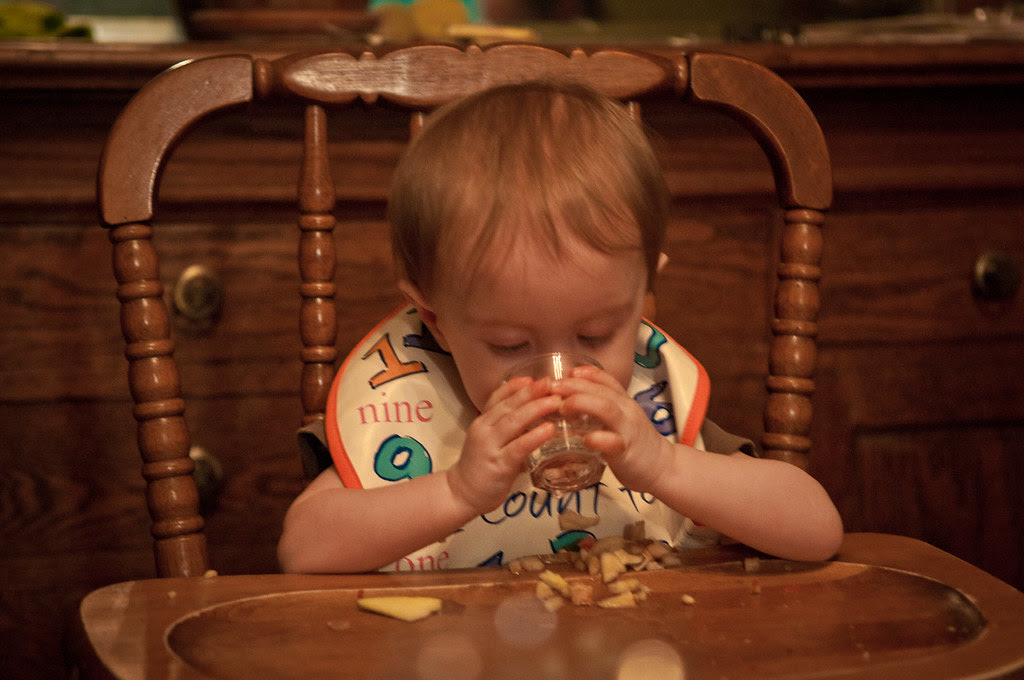 Olive skipped right over the whole sippy cup stage right into drinking straight from a glass.

Our stucco/paint/plaster guy had finished for the night, so we headed home. 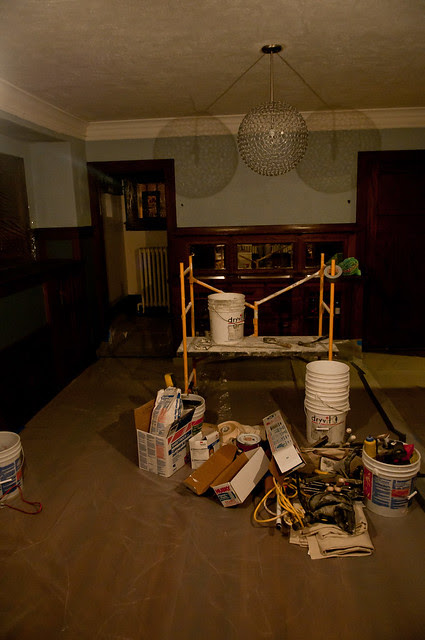 We came home to a meticulously taped house.

Normally I wouldn't care that there was work being done in our house. We have a breakfast nook to eat our meals at so having no dining room isn't a big deal. I'm excited for it to be done so we can put up our Christmas decorations.

Honeymoon: Madeline Island Without a Kayak? At Least We Brought Bikes.

By Scottie and Brooke Tuska August 22, 2012
We made it safely to Bayfield without getting attacked by any bears . I think that's because of my wily driving skills.
3 comments
Read more