By Scottie and Brooke Tuska October 16, 2011
Our original honeymoon plan was to go on a road trip up to Toronto and Montreal. Seeing as its starting to get chilly we decided to wait until it's warmer out.

After a lazy post-wedding hangover Saturday we had to get up early and head out on our mini honeymoon. We said goodbye to Brooke's rents (I guess they're mine now too) and Blake.

We decided to go out for breakfast to celebrate Tyler's birthday, say good-bye to Katie and Dennis and for us to eat before heading out on our mini-moon.

Since it was Tyler's birthday he got to pick the restaurant. He chose Victor's Cafe. 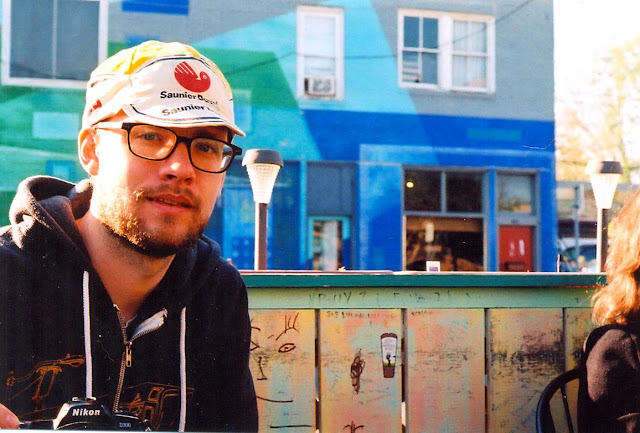 Victor's is a tiny Cuban dive of sort in South Minneapolis, so we had to wait for seats inside. Lucky for us, it wasn't too cold out.

We had eaten here a few weeks ago for dinner when we happened to be in the neighborhood, but the breakfast was even better.

Little bear Olive joined us for breakfast too.

Here's my sis doing twinkle fingers for the baby.

I could tell Katie wanted to hold the baby, so I asked Emma and my sis got to play with little bear Olive.

We all ate some really good food and took absolutely no photos of the aforementioned food.

I think Olive is a better eater than I am, she will eat anything you give her (including non-food items). Here she is enjoying steak. 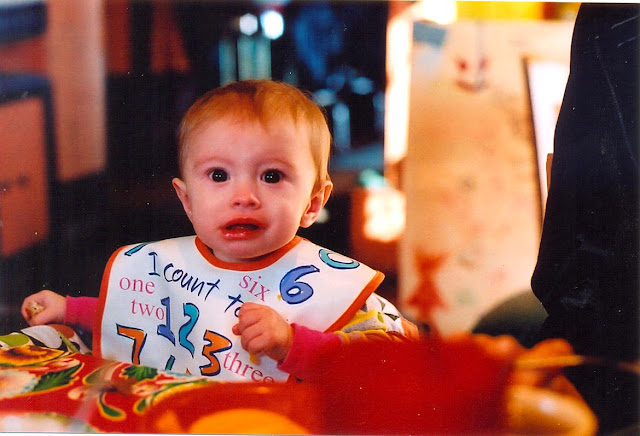 After wishing Tyler a happy bday we took Dennis and my sis back to downtown and headed northeast to our favorite state we don't live in.

We made a stop at Kwik Trip to get some air in our tires. They are the only gas station around that still offers free air.

Yup we headed back to our favorite state once again. We wouldn't be Wisconsin lovers if we didn't go there.

Most of our car rides are rather boring. To pass the time we play trivia. I picked up this deck for 50 cents at a thrift store in perfect condition. It's for ages 11-12, but a lot of the questions stump me. Not Scott, he's super smart and gets all the answers right.

We finally arrived at our destination. You know you're in a small town when there's a Pamida there.

Also notice the out of business Hardee's, an omen of things to come.

It was apparent that it was no longer tourist season.

My dad had made the suggestion that we go to Hayward. We hadn't really planned anywhere to go after the wedding. I figured we'd just start making our way north. My family used to come to Hayward every summer before my parents bought their land in Three Lakes. The past few summers my dad had been talking about how much he wanted to go back again.

Like every other tourist town in the Northwoods there has to be an ice cream and/or soda shop.

This little shop with the big cones was West's Dairy. I got myself two scoops. One of them was blueberry cheesecake, the other I cannot remember.

I got red velvet.

Scott read some local news...wait a second it's the Star Tribune.

Hayward is only two and half hours out of the cities. It seems that the city is more aligned with the Twin Cities as apposed to the Chicago-Milwaukee dominance of the eastern half of the woods.

Of course we had to stop by Brooke's favorite candy store.

I can now say I've been to every Tremblay's location. This one was probably the best. It was twice as big as the other locations for easier access to candy. Having just eaten ice cream I wasn't really in a sweets mood.

I made one caveat: no taffy. I love the sticky chewy goodness, but I've had way too much since I've dated/been engaged/married Brooke. I picked out some chocolate-covered pretzels.

It wasn't that bad, but it wasn't what we had been expecting. It was identical in many ways to Minocqua, Three Lakes, Eagle River, et al, except there was a sense that this city had seen better days.

Though most of the downtown was occupied, vacant fast food chains and gas stations dotted the town.  Not exactly the saddest site, but it didn't seem like a good omen.

We wanted to go to the Fresh Water Fishing Hall of Fame, but it was already closed for the day.

To my disappointment the lumberjack restaurant was closed for the season too.

During the summer months they have logging shows and competitions.  During mid-October they have empty bleachers and rickety signs.

Since there weren't any campgrounds around and it was pretty chilly we decided to look for a place to stay. While looking for a place we stopped at an Antique Store.

It really is the lamp of your dreams.

There were lots of nice antiques, but nothing that was just right.

I called my parents and asked them where to stay and they suggested the resort we stayed at when I was younger. No one was around so we tried another resort nearby that was open year round. All the doors were locked and the lights were turned off.

We stopped at another place that had a lot of cars. The lady came to the door with a surprised look on her face. We asked if we could stay for the night and she replied that she was closed for the season. She sent us down the road to another place.

Apparently this is where Famous Dave's was started. They also had cabins and hotel suites. The rooms cost around $200, so we left.

Also this car in the photo had a bumper sticker that said, I support Scott Walker.

So camping was out of the question. The cabin resorts were all closed for the season and we needed a place to spend the night that wasn't a Famous Dave's.

Scott said he saw a cool building that was a restaurant. We went to check it out and found out it too was not open.

Closed for the season was becoming the theme of our mini-moon.

We finally found a cute looking motel to stay at. We told the guy we had just got married. He gave us a key and as we were heading to our room he changed his mind and said, "Since you just got married I'll give you the room with the king size bed."

The room wasn't in horrible condition. It could be updated and the lampshade above the bed could be replaced.

We were a little scared by the gross lampshade, but we decided it was beside the point. I turned it around and that was that.

I looked out our window and noticed a sign for the motel that said it had an indoor pool. We went out to investigate.

Indeed there was a pool, whirlpool and sauna at our motel.

Since nobody else seemed to be staying there, we would have the whole place to ourselves. We just needed to get swim suits...in October.

We decided to go out for dinner quick so we could get back to the motel to do some swimming. We stopped at the Anglers Bar and Grill.

It seemed to be the only hoping place in town.

We each got burgers.

They were on homemade kaiser rolls and the burgers were actually pretty good. I, of course, ordered a Spotted Cow. Things were starting to look up.

We headed back to the motel and headed to the spa.

Since there was only one other guest at the motel who was in town to do some fishing, we had the place to ourselves.

We spent most of the time in the whirlpool. We were too cold to even dip our feet in the pool.

Then we enjoyed some time in the sauna. I quickly felt claustrophobic, but Brooke really enjoyed the toasty room.

We wanted to go out to the cinema to see a movie, but the last showings were at 8 and it was 8:30. Instead we flipped the channels and watched The Last House on the Left.

Amanda said…
I loved the games you played!  How funny. I”ve never been to any Tremblay’s. Maybe you guys can take me someday. The town looks a lot like Eagle River. BOO to Scott Walker. What an adventure trying to find a place to stay! The burgers at the restaurant looked great!!! And a Spotted Cow – you can’t go wrong. I was going to say “How did you get a Spotted Cow in Minnesota…then I remembered you were in WI.
You were in a small vacant hotel and you decided to walk a scary movie?? Brave, so brave…good thing you didn’t watch the movie “Vacancy”. You would have picked up in the middle of the night and left.
7:44 AM, November 24, 2011