By Scottie and Brooke Tuska November 24, 2011
Again this year Scott works Black Friday. I planned to go home, but couldn't find a ride. Like last year we decided to have Friendsgiving. 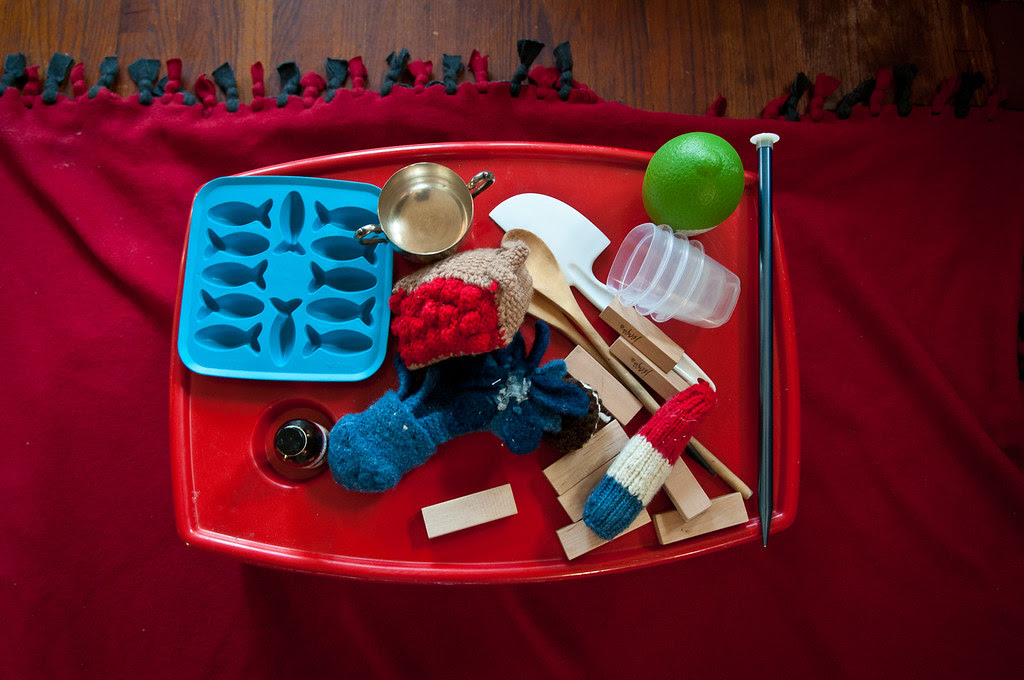 Scott didn't sleep well the night before so I started getting things ready while he slept. I gathered some items around our house for Olive to play with.

All I could think of was the impending doom that was Black Friday madness. I didn't fall asleep until 5 a.m. 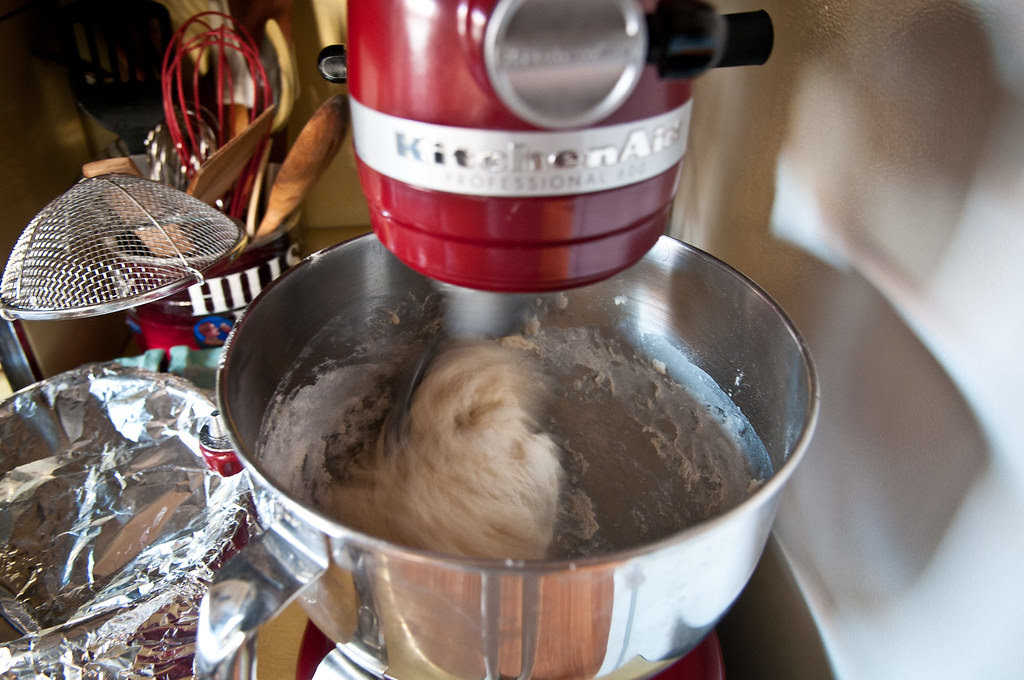 I started making dinner rolls while he slept. 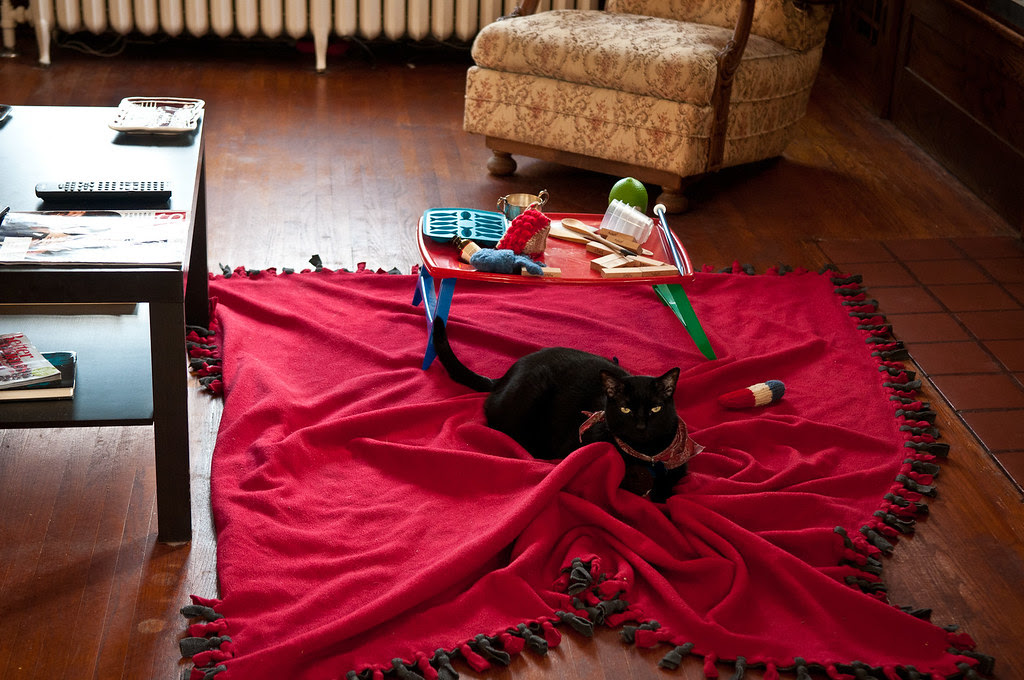 Peanut thought Olive's play area was for him. 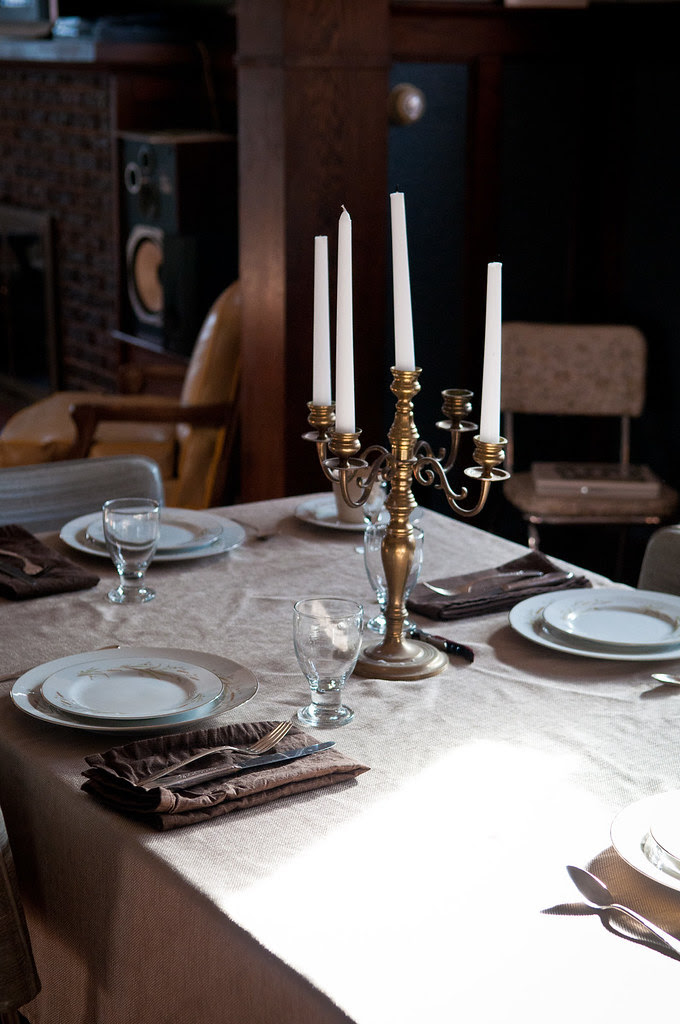 Then I set the table. I decided to keep one of our wedding tablecloths and use it for today. We have lots more if anyone wants one.  I didn't do any special decorating or place-cards.

It reminded me of our wedding. Man, was that day fun! 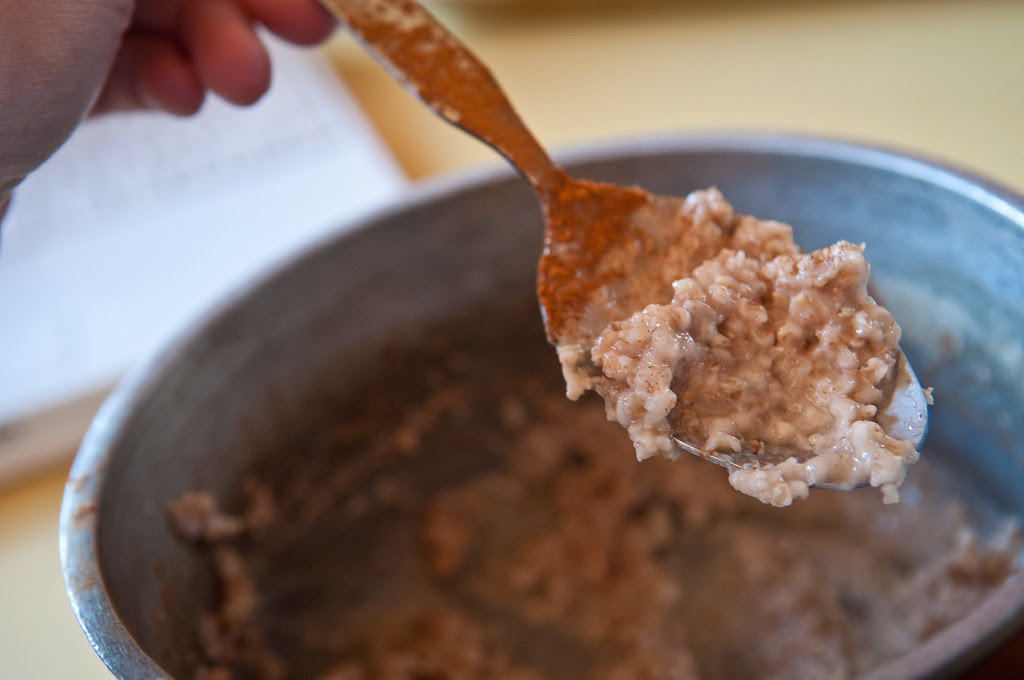 I almost forgot to eat breakfast. I had you guessed it, cinnamon oatmeal. 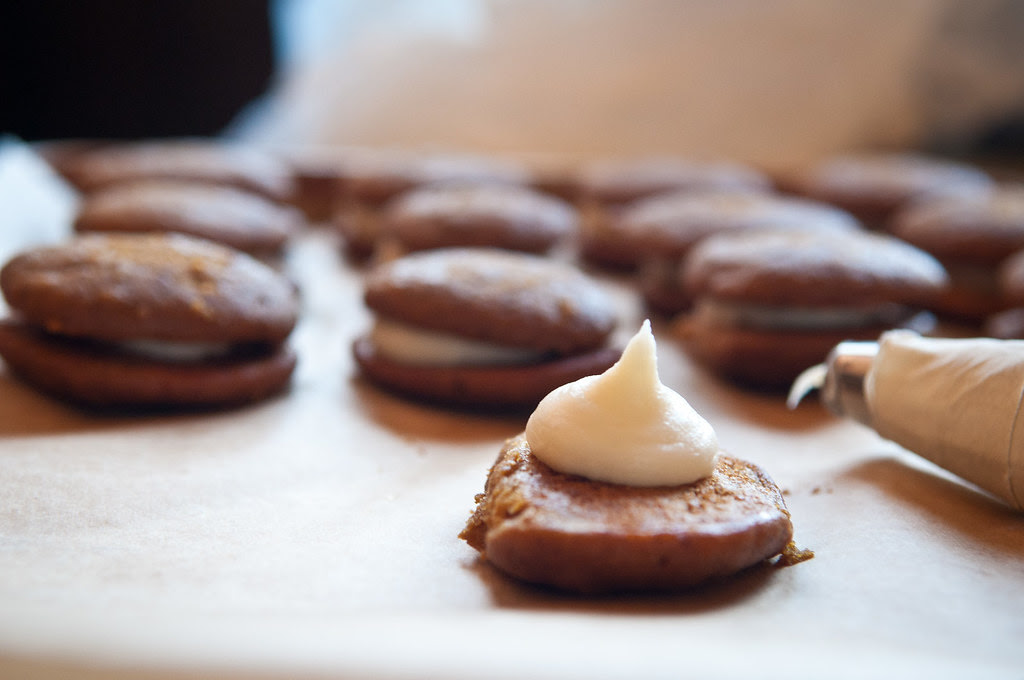 Wednesday Scott made pumpkin whoopie pies. Today I assembled them.

I was kind of miffed that she finished these and made my rolls. What I was I supposed to help out with? 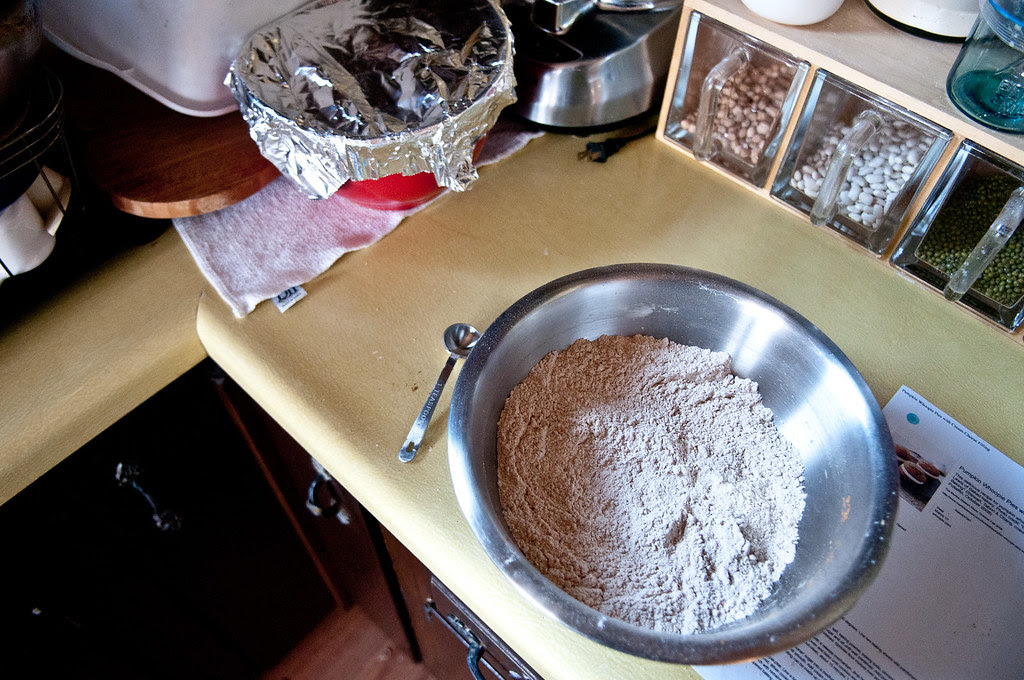 Here's me making the pies on the day before Thanksgiving. 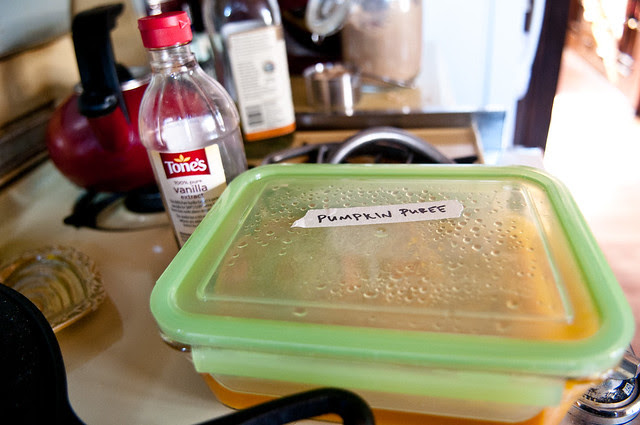 The pies themselves are mostly flour, a load of seasoning and pumpkin puree  from the ones we grew in our garden. 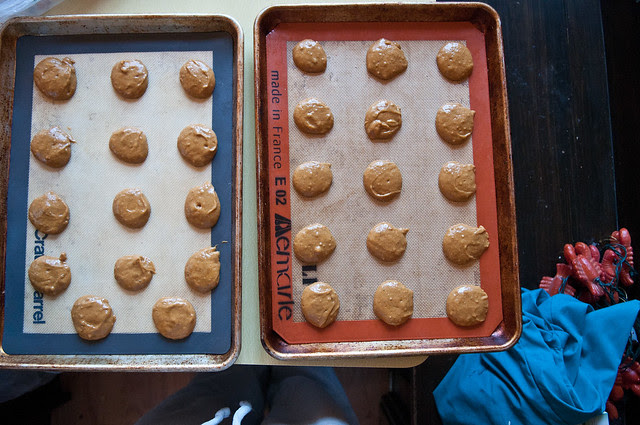 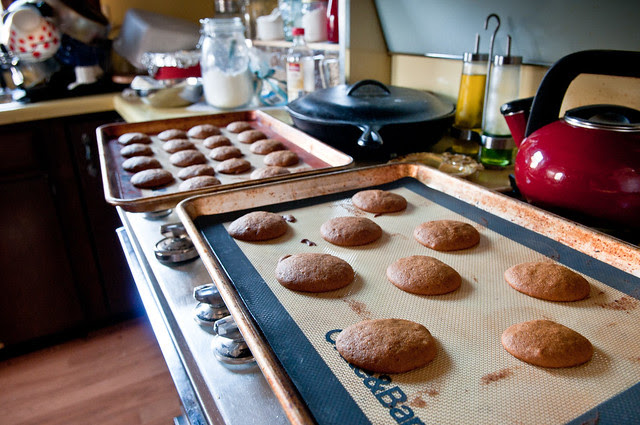 They're closer to mini cakes. 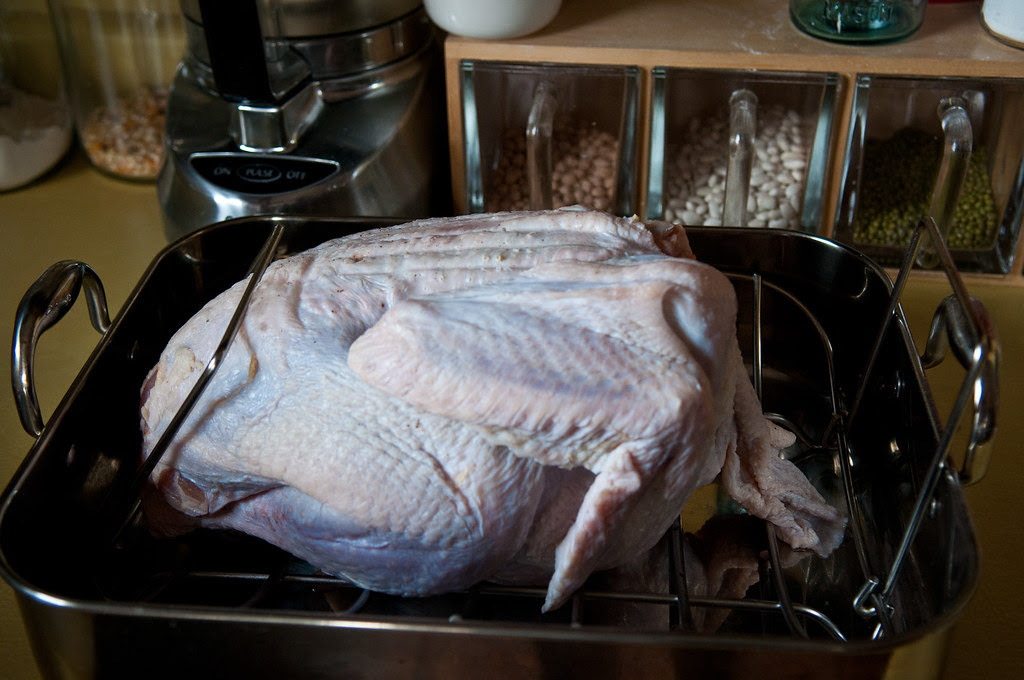 I got the turkey ready and Scott finally got up. This was our first time roasting a whole turkey. Neither of us had any clue what to do. Like I said before we hardly eat meat by itself. 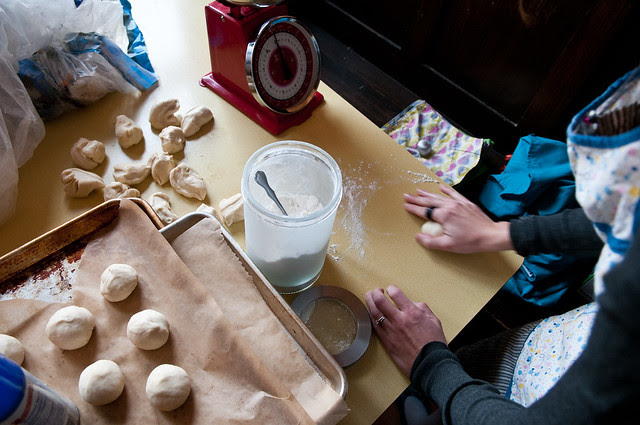 Brooke finished up the rolls. These are great the day of, but go stale very quickly. 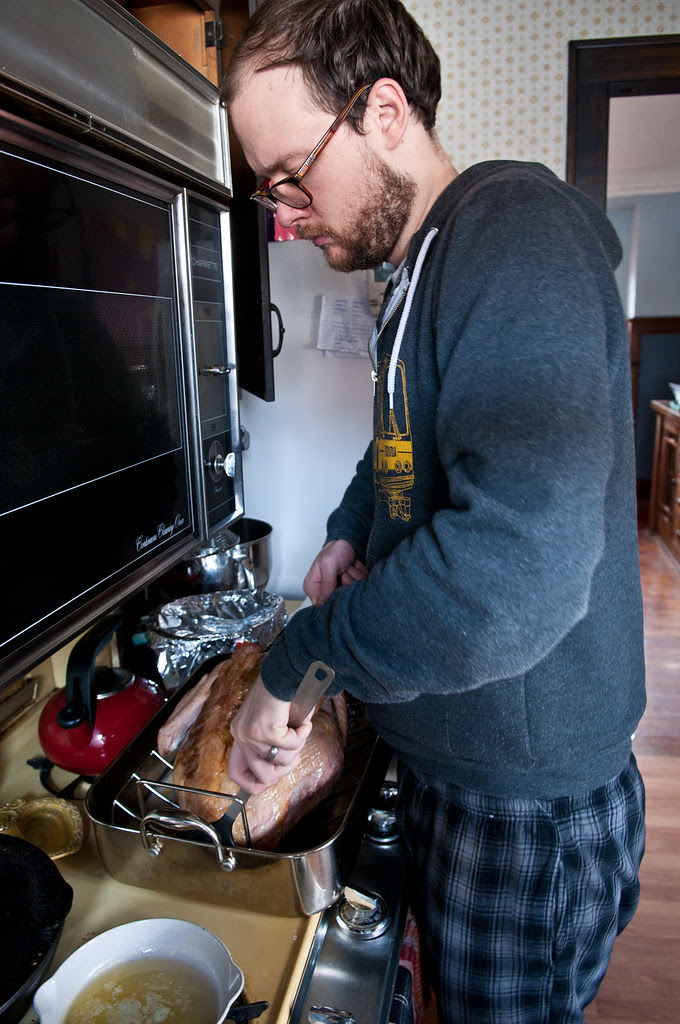 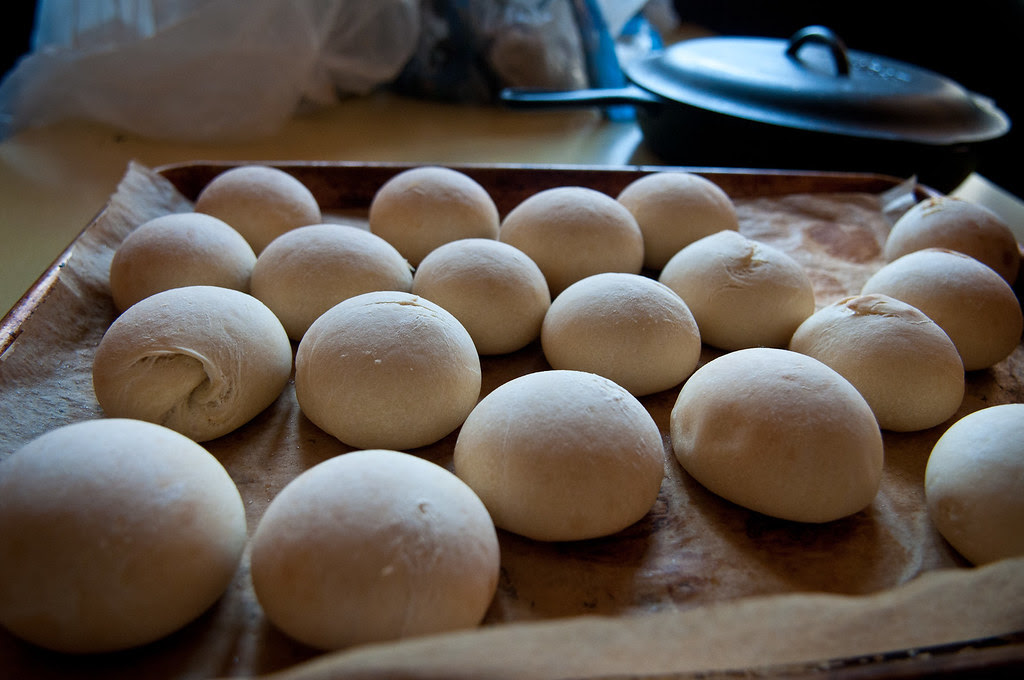 Then the rolls were ready. 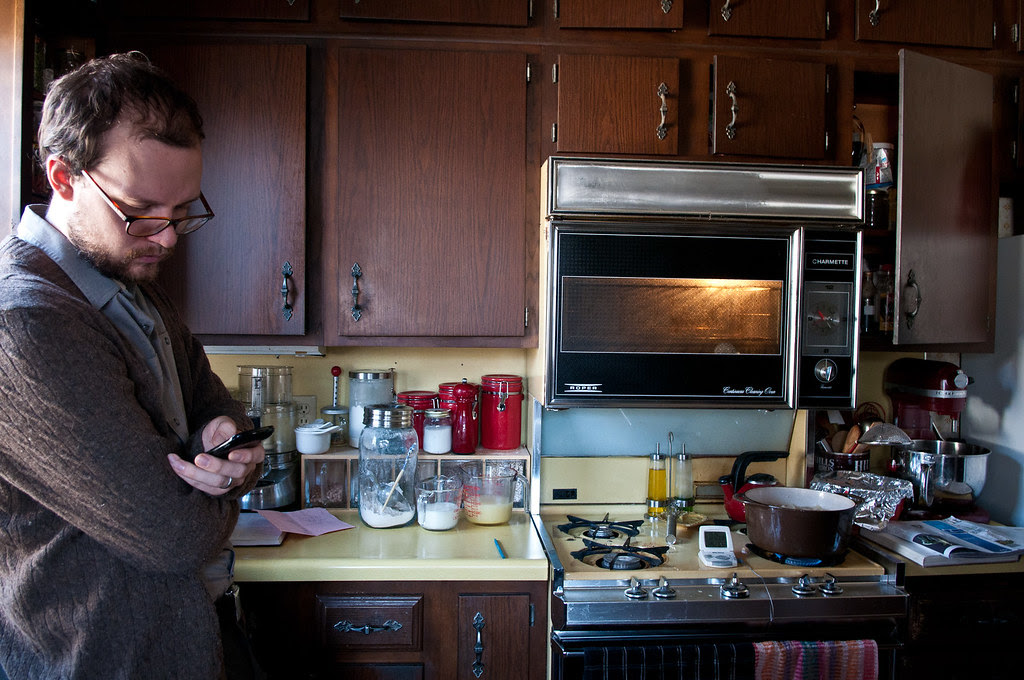 I started the mashed potatoes thinking that the turkey would be done in a half hour.  The turkey took a lot longer than we thought. So I killed some time on my Nexus S. 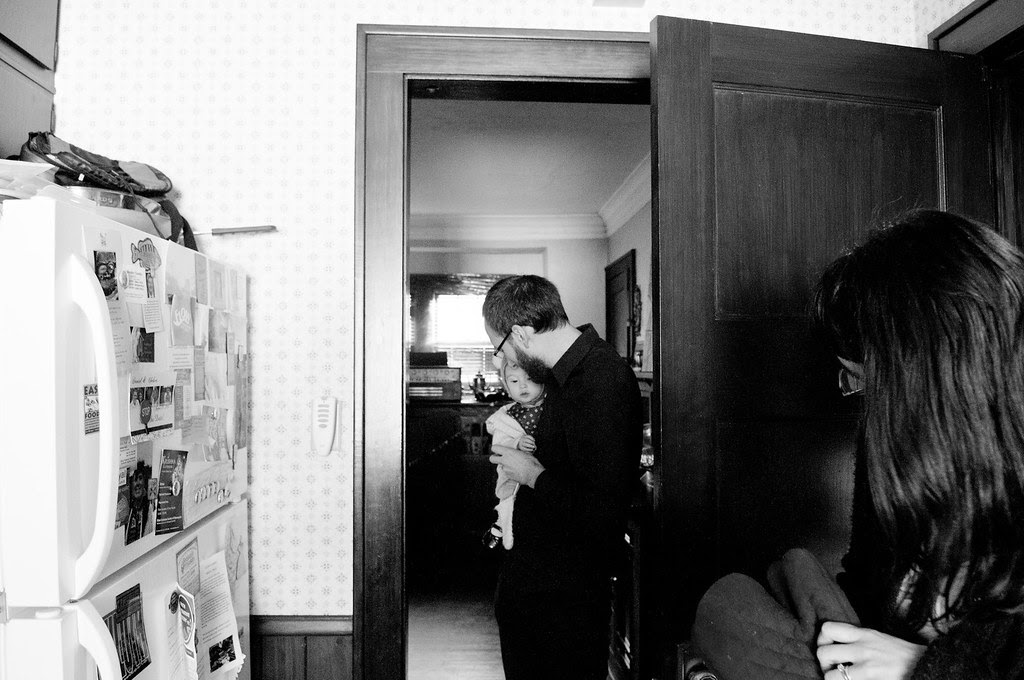 Then Tyler, Emma and Olive arrive! I feel pretty honored to have been a part of the Olive's first holidays this year. Easter and Thanksgiving. 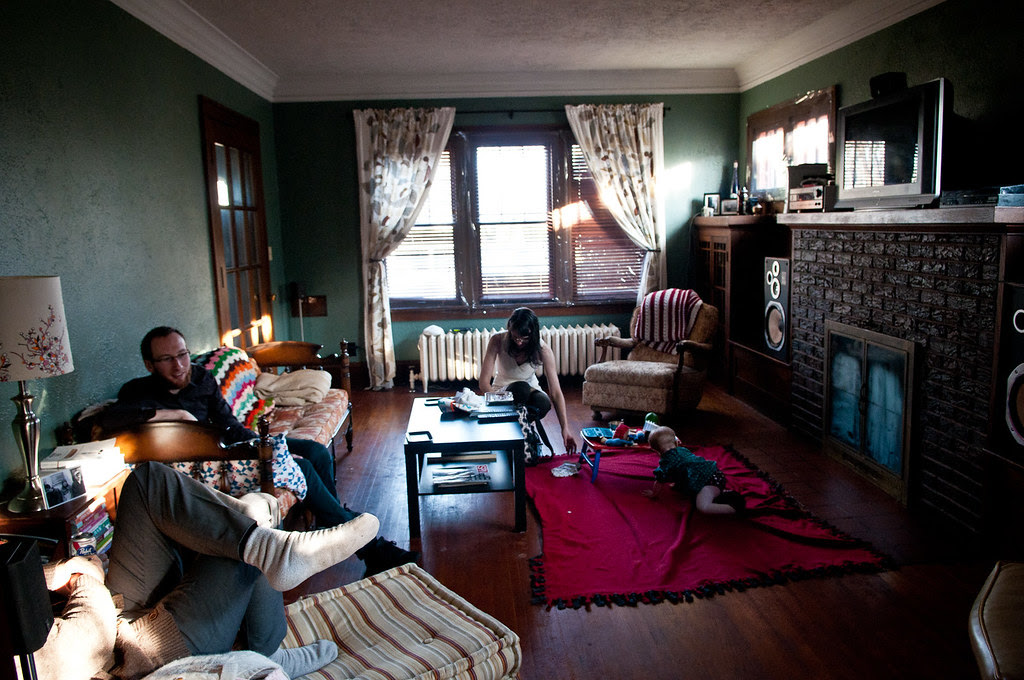 We hang out in the living room with some drinks while the turkey cooks. 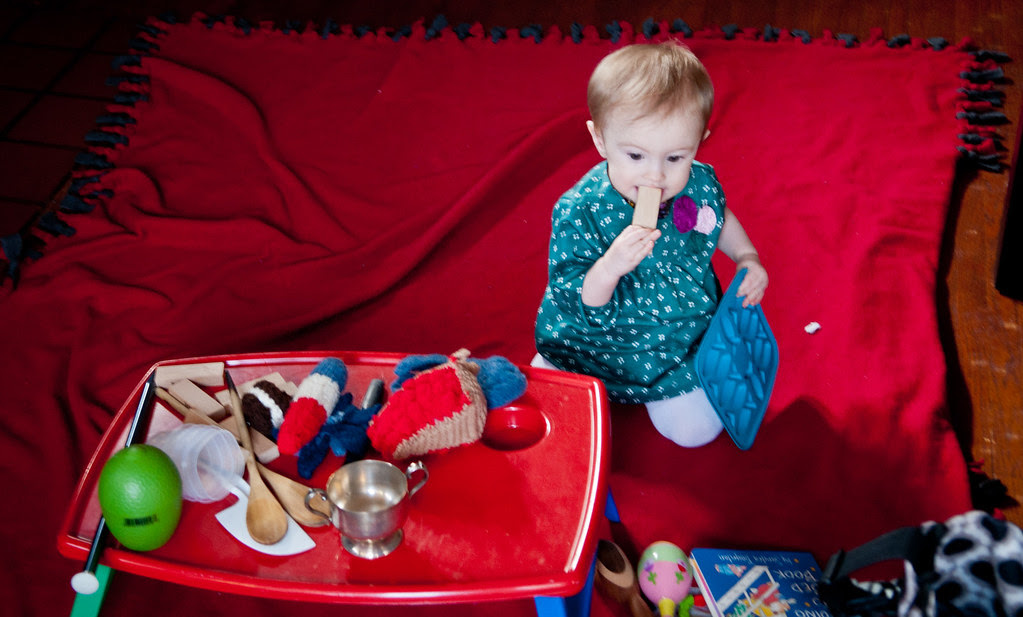 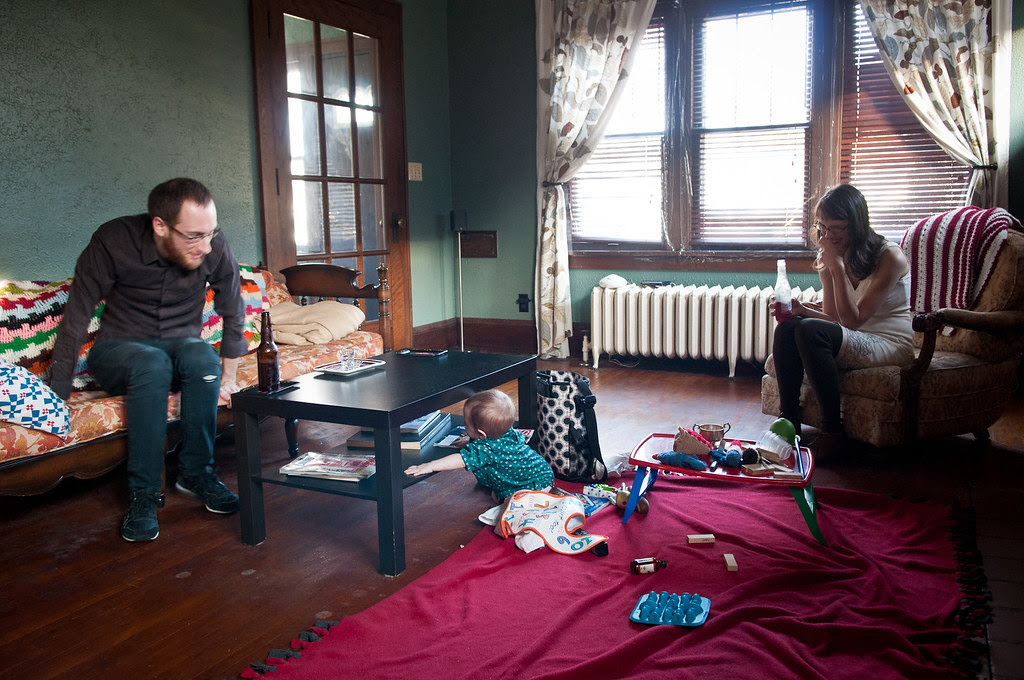 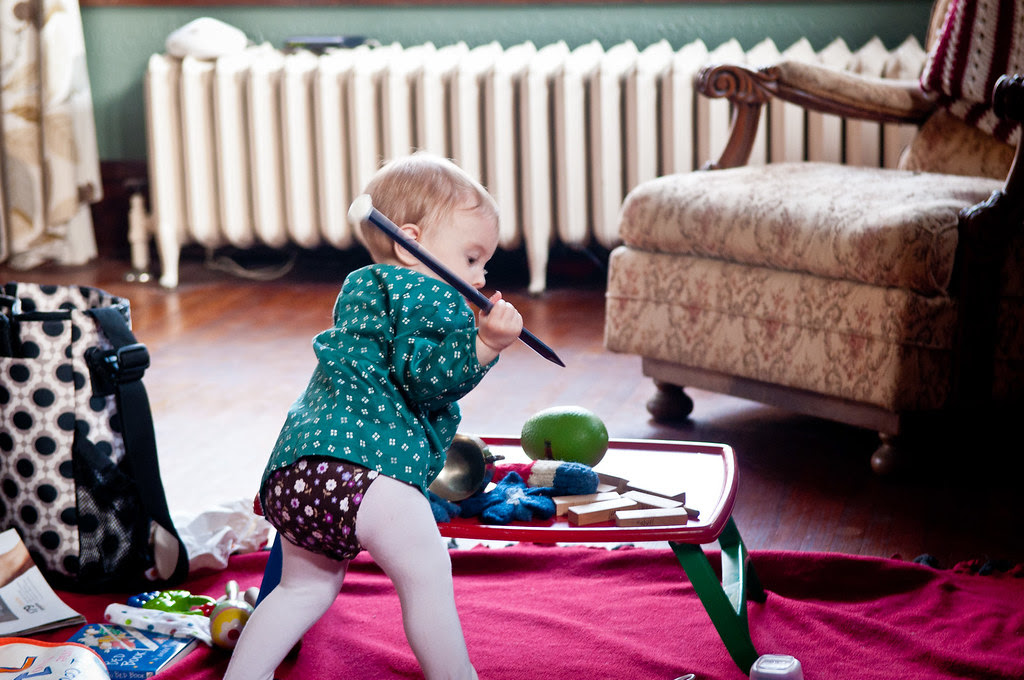 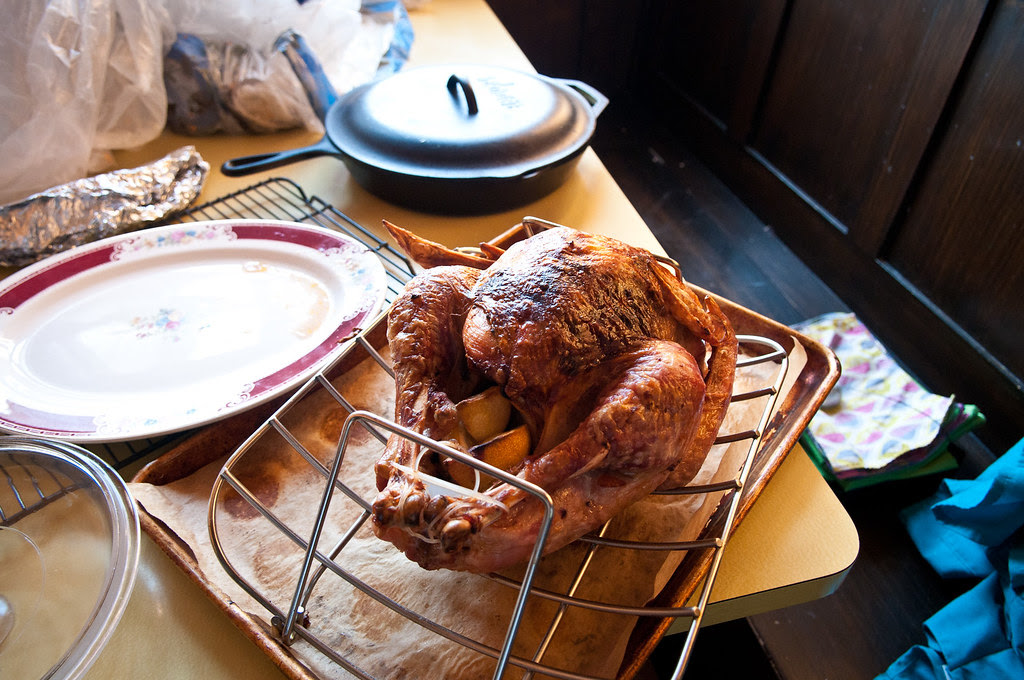 Finally the turkey is ready.

We had to put it back in when we thought it was up to temperature. It ended up turning out pretty great about an hour later. 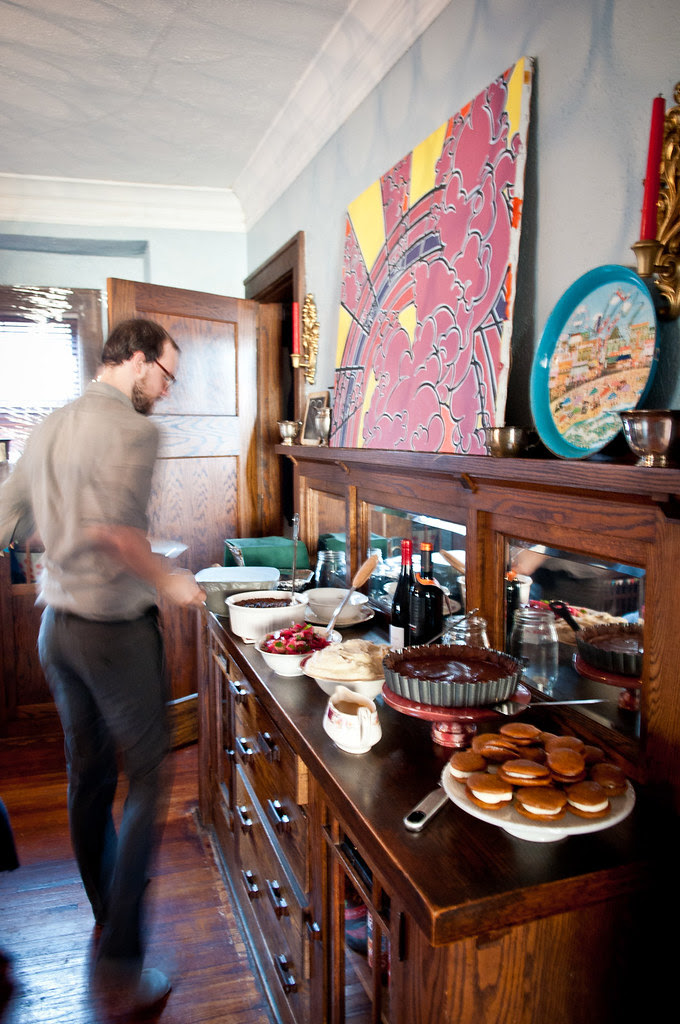 We made half the dinner and Emma made half. Splitting the load makes for a pretty easy dinner. Last year we each made our own Thanksgivings and ate together. This year made more sense in splitting so we didn't have tons of leftovers. 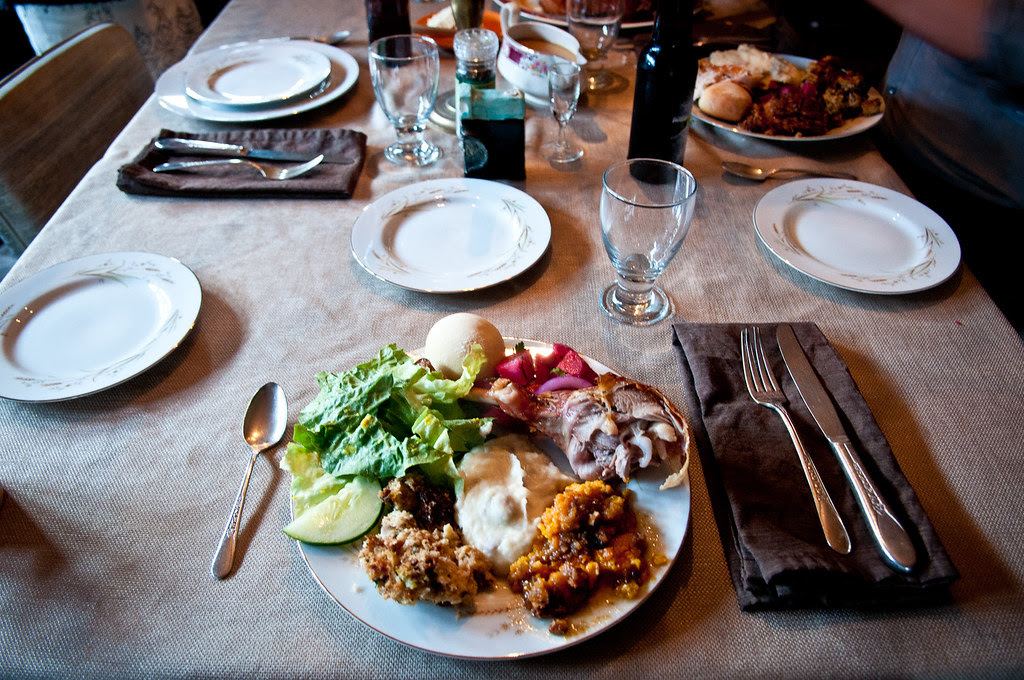 Tyler thought it was the perfect Thanksgiving meal. I'd have to agree. 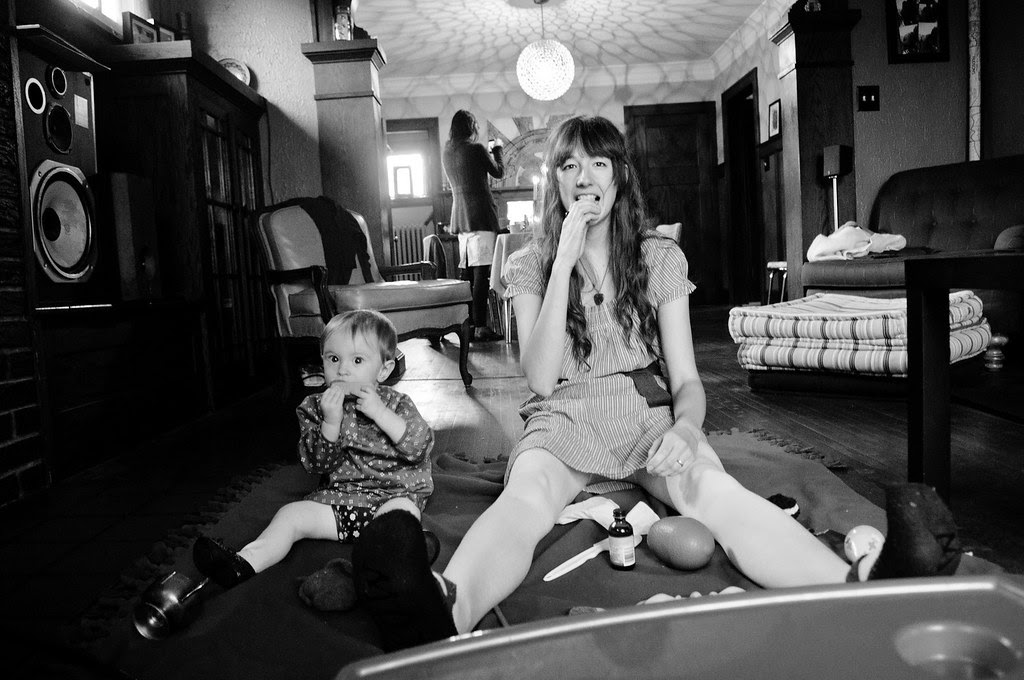 While Tyler continued to eat food, Brooke and Olive ate their toys. 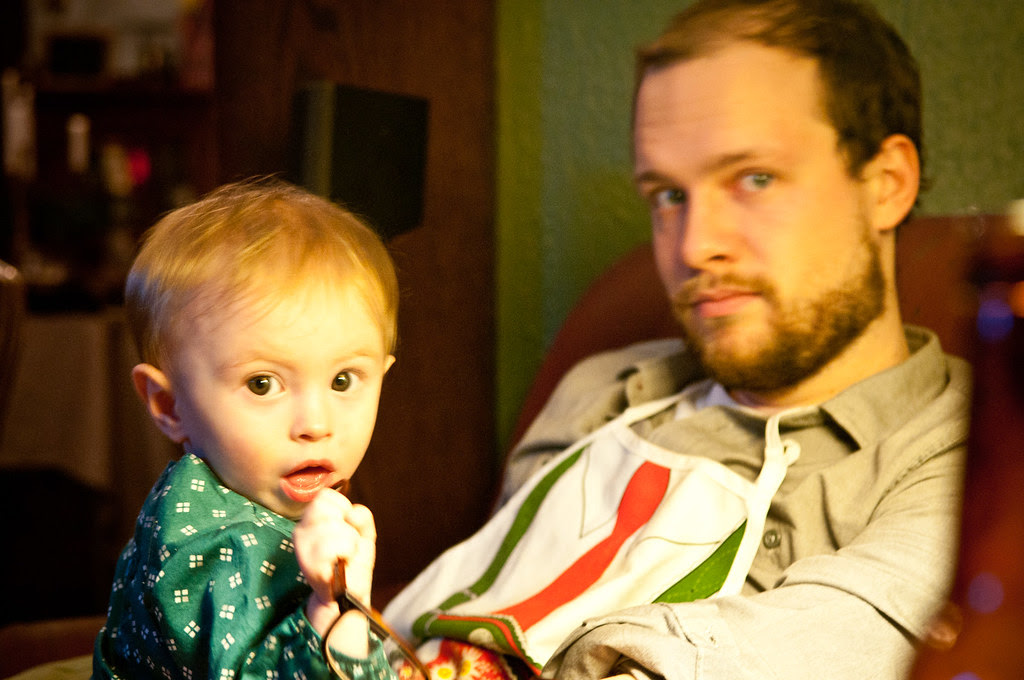 After dinner Olive stole Scott's glasses and tried to eat them. 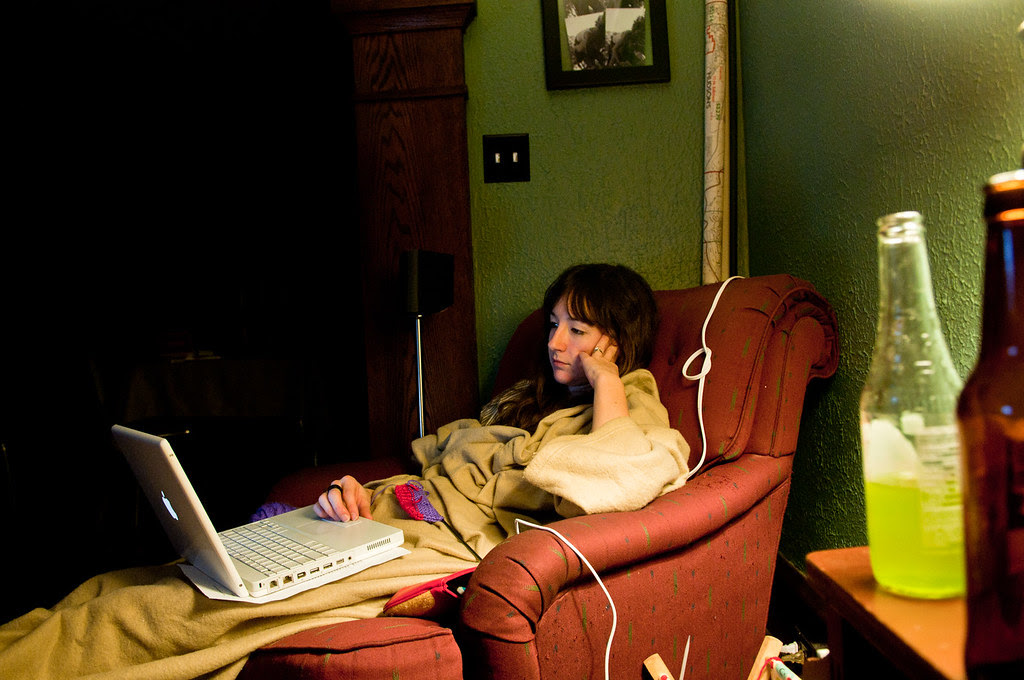 Our night ended with Scott having to leave for work. I think I was more upset than he was about him having to work overnight. It just makes me sad that people care more about what they don't have instead of being thankful for what they do have. Stores wouldn't open early if they knew people wouldn't go.

But remember when we ate at Ikea...on Easter. How's that any different?

Amanda said…
The meal looked great! The comment about Ikea on Easter is very true…you went to support the workers! But anyway, I do feel bad that you had to sit alone on Thanksgiving night. I agree that it’s sad how people are more excited about the shopping sometimes than getting together with family. I’m sad that there is a Packer game on Christmas. I think that’s the same type of thing too. We should be together talking and doing things, not sitting together watching a football game.
1:46 PM, December 18, 2011

Another Marine on St. Crox-Stillwater Adventure

By Scottie and Brooke Tuska July 17, 2016
It's our favorite time of year: berry picking season. I think that's more of Brooke and Meadow thing, but I'll go along with it. Meadow has been asking to go for weeks. I'm not sure how she knew about it since she hasn't gone since she was a wee little one.  I made a giant breakfast before our adventure, plaintain and avocado toast, hash, eggs, cherries and strawberries. Lots and lots of blueberries as far as the eye can see. We went back to our go to berry picking farm, The Berry Patch. "Look a tiny one for me!" Meadow did an awesome job picking. She helped the whole time when she wasn't eating any. I complained and ate the whole time. We quit when the bucket was this high. Apparently we forgot that you pay by the bucket and not pint. We could have easily gotten another pint in there. As I was taking Meadow to the bathroom I noticed the raspberries looked really good. We decided at $5 a pint we would onl
Post a Comment
Read more

Not My Normal Thanksgiving

By Brooke November 26, 2006
Due to work and school I wasn't able to go home for Thanksgiving, but I survived because my sister"s" came up to be with me. We made chicken instead of turkey. I made pie but the dog ate it. Morgan was wonderful and made everything. We were able to eat for 3 days. We did a lot of other things and I still managed to budget my money. It really stinks to be completly broke, I've never been this poor in my entire life. All my money is going towards rent which leaves me with absolutly nothing. I dream of the day my loan check comes. My battery in my camera died so I missed a lot of great photo opportunities. I got a new job doing stock at American Eagle. Menards found out before I told them. I've never seen my manager so sad. I did a lot of knitting during my "Thanksgiving break". I made a scarf for a girl at work and a washcloth for Brittany. I decided I'd model the scarf. I'm still working hard on Scott's sweater. I'm probab
4 comments
Read more