A Weekend in the Valley

By Scottie and Brooke Tuska July 16, 2011
We headed back to the Fox Valley again. This time for my sister's bridal shower.

.So, we had this A&W coupon for two years. We decided to finally use it and get it over with

I was asked to make cupcakes for Chelsea's shower. Instead of staying up all night the night before I made the cakes at home and decorated them when we got there. Well first we made a stop for ice cream at Dick's in Kaukauna. Somehow we both forgot to bring a camera along for this.

Suffice it to say that we almost always stop at Dick's when we're in the Fox Valley. It's great, but I've been dying to go to Oshkosh's Leon's. I've always wondered if it could live up to the Milwaukee mainstay.

I tried glazing the cakes at first, but wasn't pleased with the outcome.

Brooke was getting in her typical cake decorating mood, which means she was freaking out.

Then, after switching to a smaller tip, decided to decorate them with royal icing.

When Brooke slows down everything seems to turn out OK. In this case the cakes were oh-so-precious.

The next day (Saturday) was the shower.
Scott spent the day with my dad. 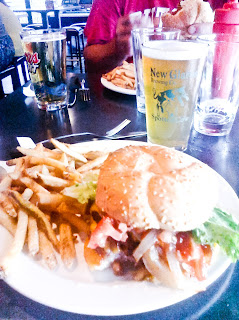 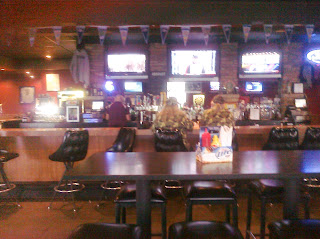 We had to bring something to the party that Chelsea forgot. After that, we went to a sports bar where I got a burger and a brat on the same bun. It was awesome.

What was more awesome was a couple wearing matching naked lady-camouflage outfits.

If your curious about the mini tiered cake pan. You can get it here.

After all, she works there.

Chelsea's shower made me excited for my own.

That means you Katrina, Chelsea and Brittany.

Blake finally arrived after being in Canada all week.

He got this sweet Mac Book Pro 'cause the art school at UMD requires it. As a computer nerd and a photographer I question that requirement. I love Macs, but what Adobe application can you not run on a PC? 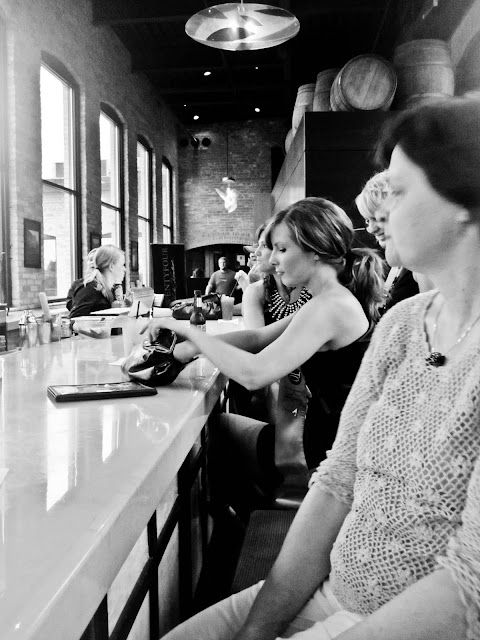 Later on, some of the ladies from the shower met up at Fratello's for dinner and drinks. They had their Fox River beers on tap. I went with the Buzzin Honey Ale. 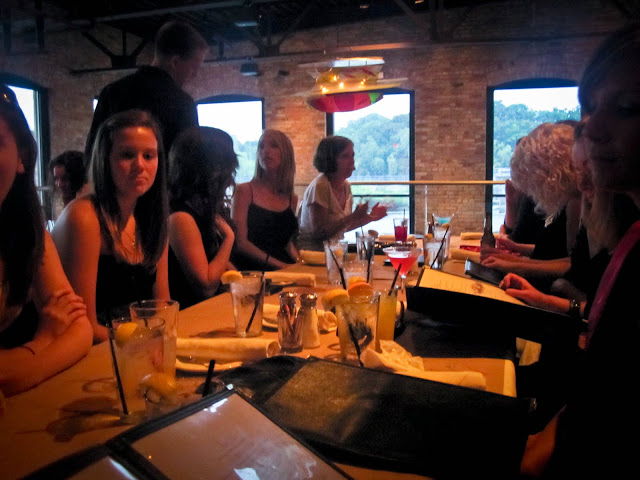 I have to admit I'm pretty impressed with Appleton. They've been fixing up the buildings and warehouses on the river and making it a pretty hip area. Almost like the 3rd Ward ﻿in Milwaukee.

Blake and I were hungry and bored. We asked Mr. Mike if he wanted to bike with us to Butch's Pizza. He decided to eat a frozen one at home.

Apparently all of the employees at Butch's were criminals of sorts. At least that's what Brooke tells me.

When I asked for root beer in a pitcher they thought I wanted crappy Barq's. I wanted the Sprecher that was on tap. Since Blake's still a youngin' it was the closet we could get to the real deal.

Since Blake's a vegetarian, we ate a big cheese pizza. It was your typical paper-thin midwest pizza; as good as any other. 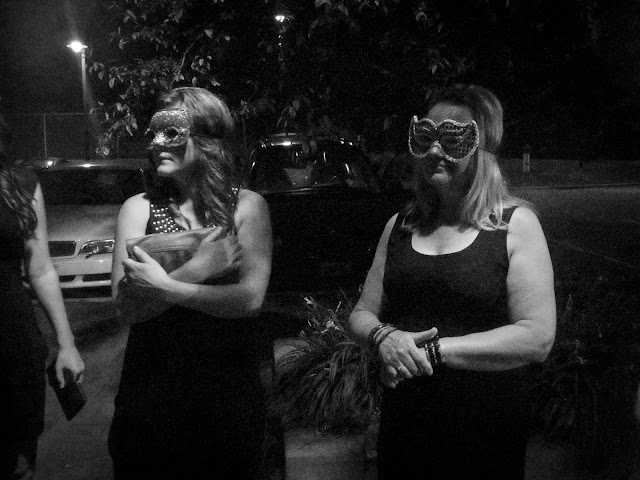 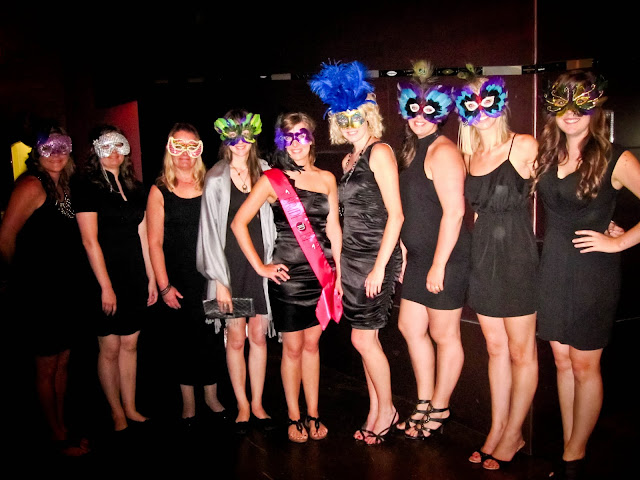 Chelsea's bachelorette party was a masquerade theme. After dinner we put on our masks and headed to "The Ave." 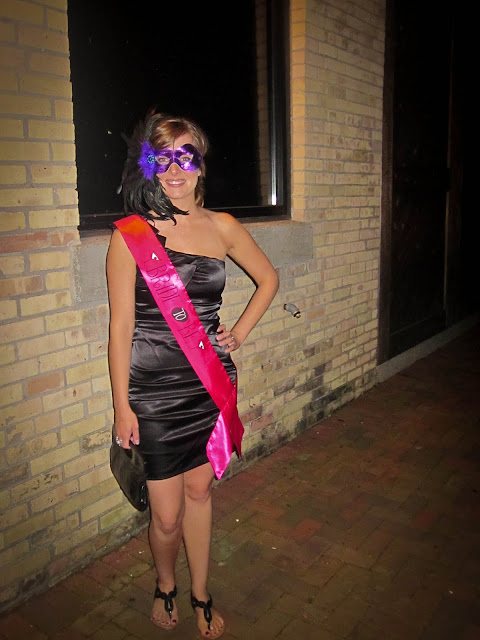 Since we were already in Kimberly, Blake and I headed to Paper Fest. It was as exciting as it sounds.

After the uneventful small-town festival (it just couldn't live up to Cheese Fest's high standards) we biked back. I passed time by playing some Wii until I had to pick up the gals from the bachelorette party. 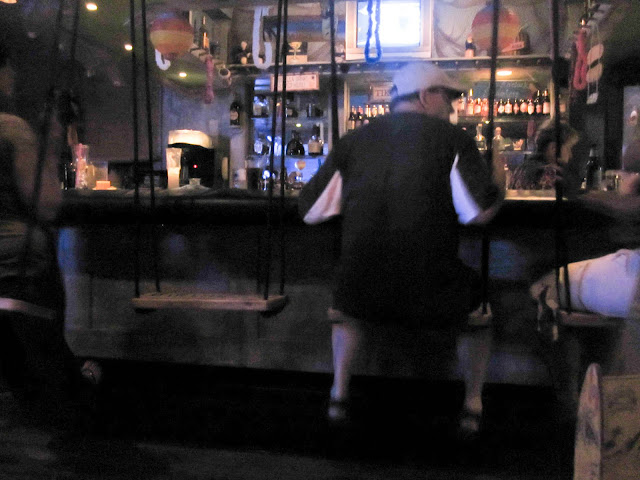 Swings for chairs. How strange. 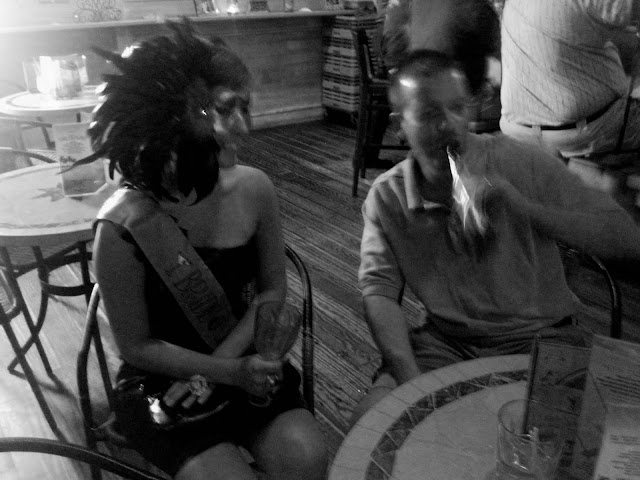 This drunk guy made sure he talked to everyone in the room. He told Chelsea he liked her mask and then pointed at me and said "I don't like hers, it's too big". 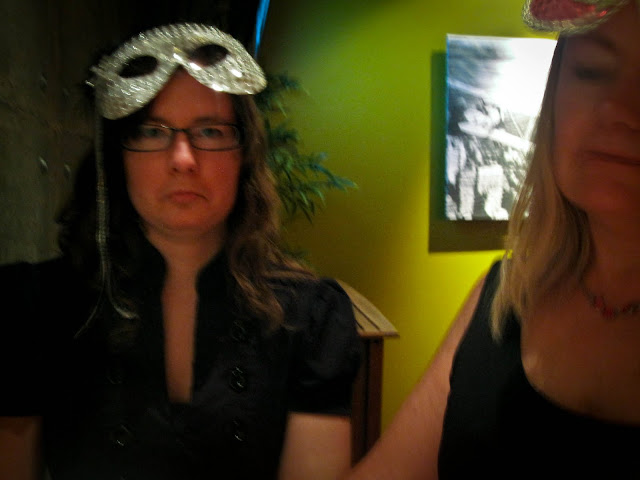 Brittany wasn't enjoying the bar scene and eventually convinced Mom to take her home. I think mom would have stayed out all night with us. 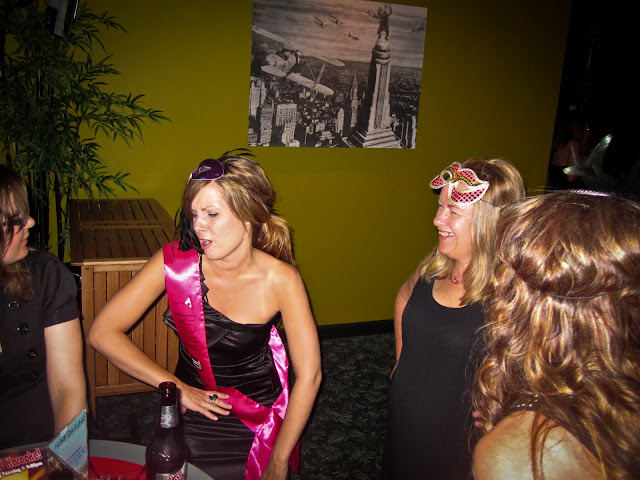 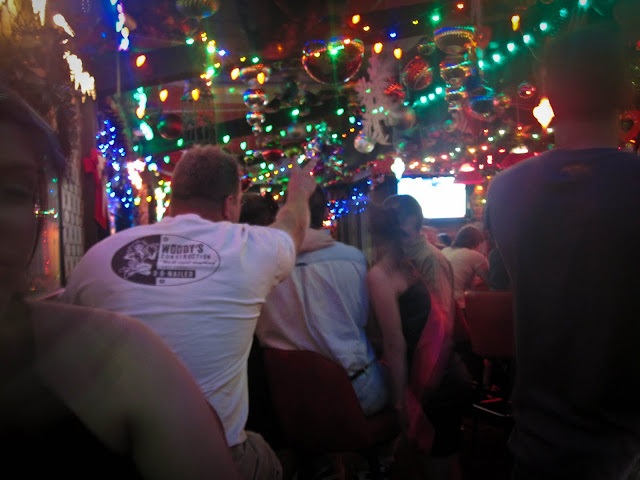 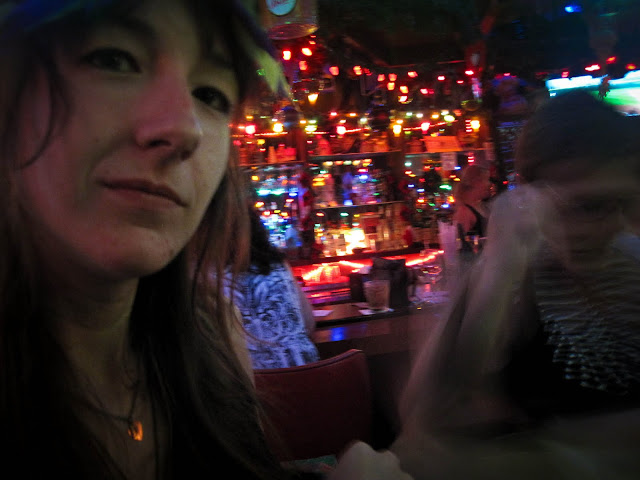 The last place we went to was Cleo's. My dad knows the owner who, for fellow Appletonites, also owns Mr. Cinders. He installed the flooring behind the bar. Chelsea and I made sure everyone knew that. 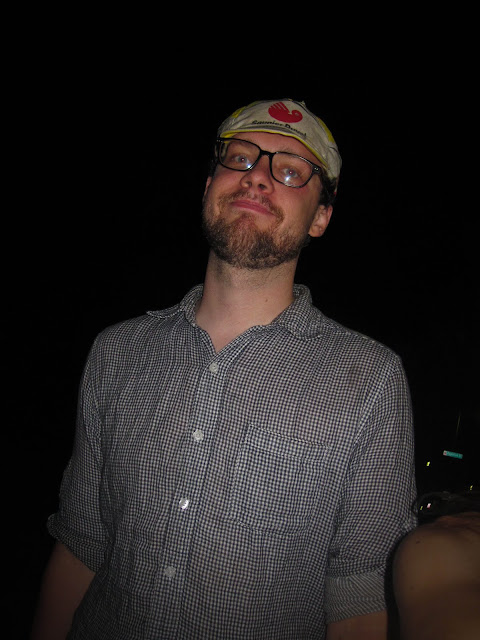 Then my DF came to bring our drunk butts home.

So apparently df mean Darling Fiance. Anyways, they were all quite drunk. It was funny. 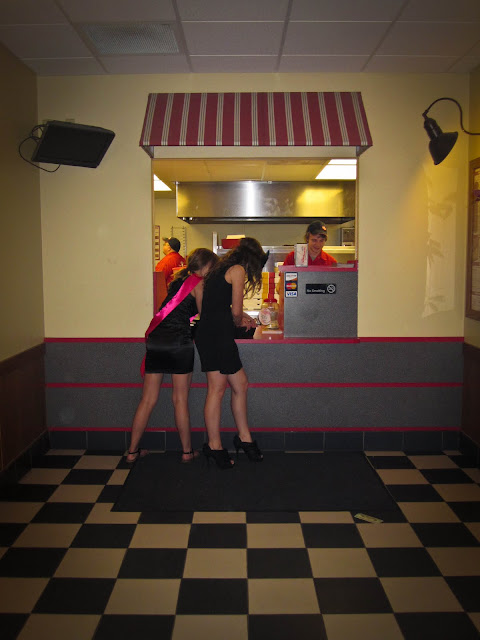 But first Chelsea had to order Toppers pizza sticks. ﻿ 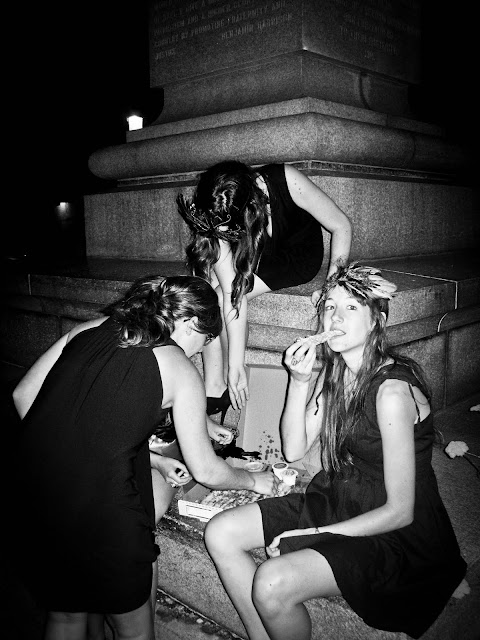 I told one of the gals that she reminded me of Sarah Palin. She talked like her, walked like her and, well, looked like her. She was not having it. 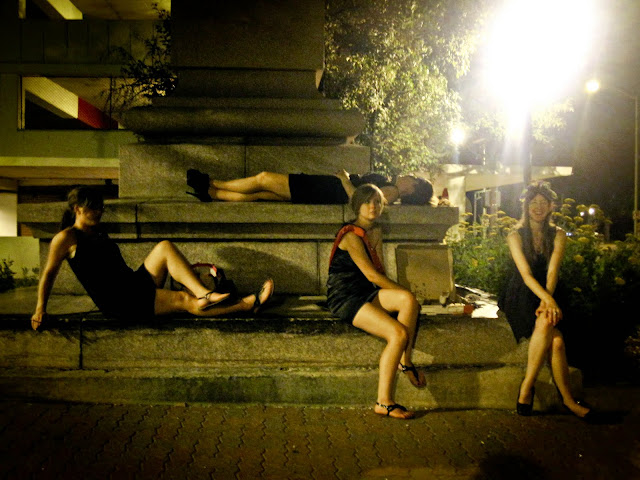 Amanda said…
I loved this blog!
THe thing I don't like about Dicks is that they do not accept cards...a lot of ice cream places don't and it makes me mad - get with the times people!
Your cupcakes turned out really cute! You could do those for weddings Brooke, you should market yourself..I can give you the business card I made for you for my wedding! ;) I laughed hard when Scott wrote about the people at Butches were criminals...I've heard that too, not sure where it comes from.
You girls looked cute for the bachelorrette. Jeff and I LOVE Topper sticks...the past two weeks they were on sale for only $6 so we bought them probably 4 times. :) Weren't they good?
Nice blog guys.
3:43 PM, August 12, 2011