The Road back from the Valley

On Sunday morning we had to head back, so Brooke made the bed.

We packed up early to make a few stops before heading home.

After these photos were taken my mom complained we take too many "dumb" pictures.

I think she was saying this to me. I like to document every minute detail of our days (or weddings). She complained about the same thing earlier this year. Gail didn't want me to shoot her other daughters wedding. Ouch!

I had oatmeal for breakfast (bet you didn't see that coming).

I drank a Moutain Dew as we left Little Chute. Not exactly the most nutritious breakfast, but I feel like I have to drink soda when we're back home. It's not allowed in the Romenesko-Tuska household.

We dropped off Brittany on the way and headed to Redgranite. I made sure we stopped at Mosier's first. Whenever I would visit my grandparents my Grandma would buy me a toy from here. I usually picked out giant coloring books.

This time we found a cute wedding themed photo album. And they had Seventh Generation dish soap and dishwasher detergent for $2.00!

We stocked up on a years supply.

Next time we need to stock up on fishing supplies.

We had hoped to change into our swimsuits at my Grandparents house. No one was there and it was getting very hot outside.

Brooke and I decided we'd just get dressed in the backyard. Since they live in the boonies, no one was going to see us.

My grandpa has owned a car dealership since 1948. He bought land across the street from where he grew up and him and his brother started a car repair shop. After a few years my Grandpa took over and turned it into a dealership. When he married my Grandma they built a house next door. I wish I lived next door to where I work. My siblings can correct me on any errors I made in the history. To this day he still works there. Although its probably more of a hobby for him then to make income.

I've been coming to the quarry to go swimming since I was 16. My mom used to go as a teenager. There was a pickle factory next to it and during their breaks the employees would jump in. It seems the word keeps spreading as more and more people come every time I go.

No one really owns the place so there are no lifegaurds and people do whatever they want there. A lot of people have died here. I mentioned to Scott that the first few times I came someone died when I was there. He was a little hesitant about going in. 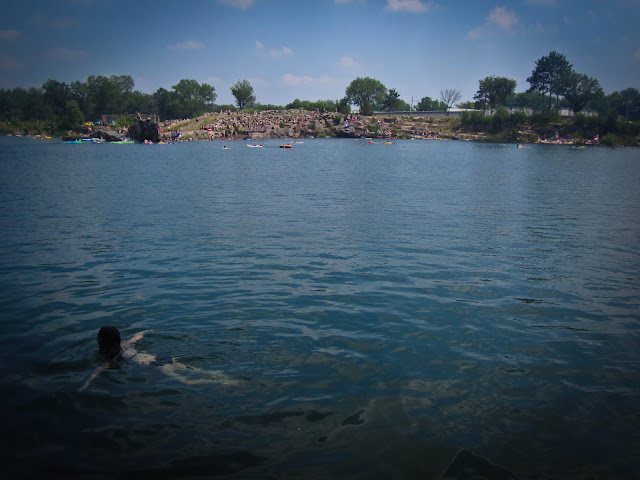 Once Scott into the water he was fine.

There was a quarry not too far from my grandparent's home that we'd always drive by on the way to Racine.  My mom always scolded the people swimming there from the car. I also couldn't swim until the sixth grade, so deep water has never been something I've been completely comfortable with. It was a big step for me to jump in. 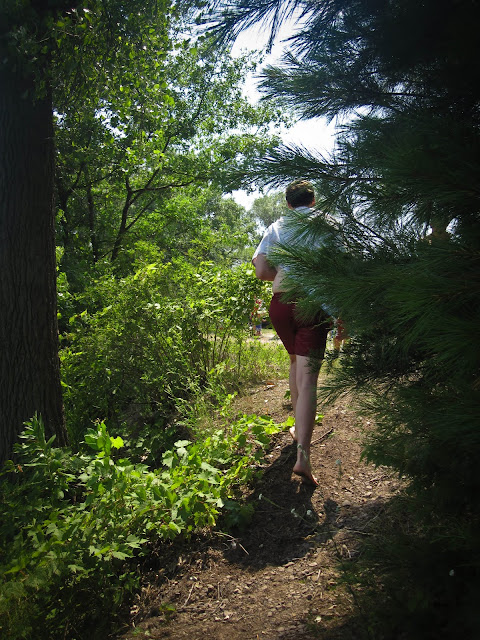 It was fun. I just wish there were less podunks around.

We were getting hungry and decided to start heading home. 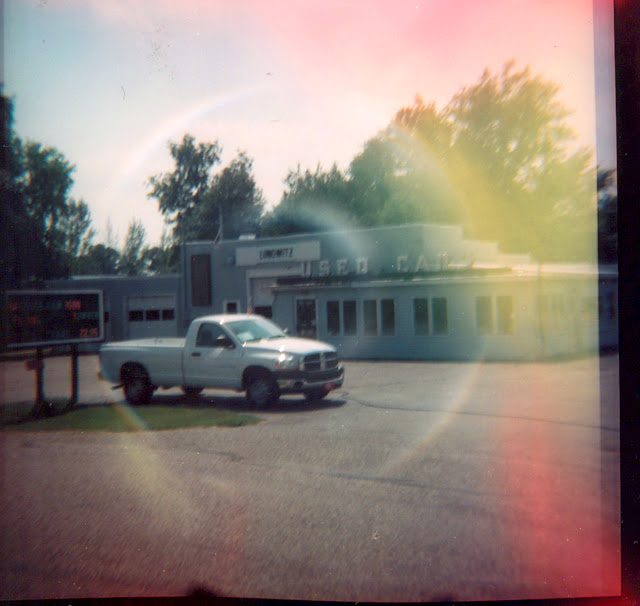 We stopped back at my grandparents place and I took some photos with my Diana.

We decided to pretend Brooke was hitchhiking. So I picked her up and took her to Milty Wilty in neighboring Wautoma.

Brooke had always wanted to stop there. Since we were hungry and Redgranite proper didn't have much in the way of food, it was the ideal lunch location.

We ordered a strawberry malt, a couple burgers and curly fries.

The malt powder was glued to the bottom of the cup. Once and a while you'd get a big hunk of powder up the straw. That wasn't great, but the burgers were tasty and curly fries are a sure bet. 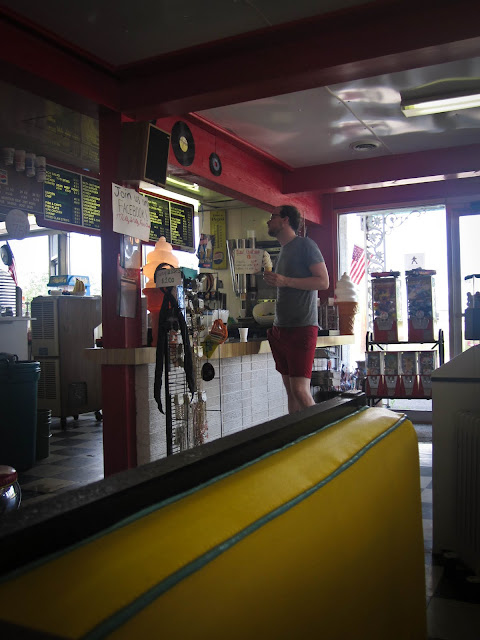 We had to get ice cream frozen custard before leaving. I bought a bracelet here and should've put it on right away because I left it there. Granted it was only $1, but I liked it.

I wonder when diners started putting records and cheesy paraphernalia on the walls. Or were records always on the walls of 50s diners? 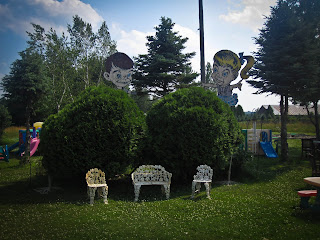 I love the creepy children and the empty swings.

Note the hawk in the upper right-hand corner. Milty's backyard was more than a bit creepy.

Scott had fallen asleep while I was driving and I was starting to get a little sleepy myself. We stopped at the nearest gas station for some caffeine.

I really shouldn't drink coffee or coffee-like substances, but it did the job.

We took the scenic route instead of heading up 94. The areas south and west of the interstate roll and up down, farms carved into the landscape; the antithesis to the typical midwest corn farm. This larger farm doesn't exactly fit the description, but I liked the signage.

My frapaccino made my stomach hurt.

When we got home I remembered that we were having toilet problems. Every few months we have issues flushing the main floor toilet. It's connected to a rather large cistern, which you need to empty from time to time.

You're supposed to loosen a nut on the top and then turn a few knobs. That's stuck.Instead you have to blow air into the cistern. That forces air into the tank and water out.

Scott whipped us up a delicious dinner while I unpacked.

Rock Paper Stitch said…
Yes I will be correcting you. Grandpa's dad owned the land his garage and house is on. Often times land was handed down from one generation to the next. His dad owned land from their 2 houses all the way down to the cabin.
10:28 AM, August 15, 2011

Brooke said…
Emma: When were you at that quarry? I didn't realize you went up to Wisconsin so much.

Brittany: I was wondering about that when we were there. Does our family still own land across the street from their house?
12:50 PM, August 15, 2011

emma. said…
A couple of years ago with Ben & Mandy & Jordan & some folk. Growing up I went to Wisconsin multiple times a year with my dad. It's probably the second most familiar state to me.
9:32 PM, August 15, 2011