The End of the Cheese Weekend 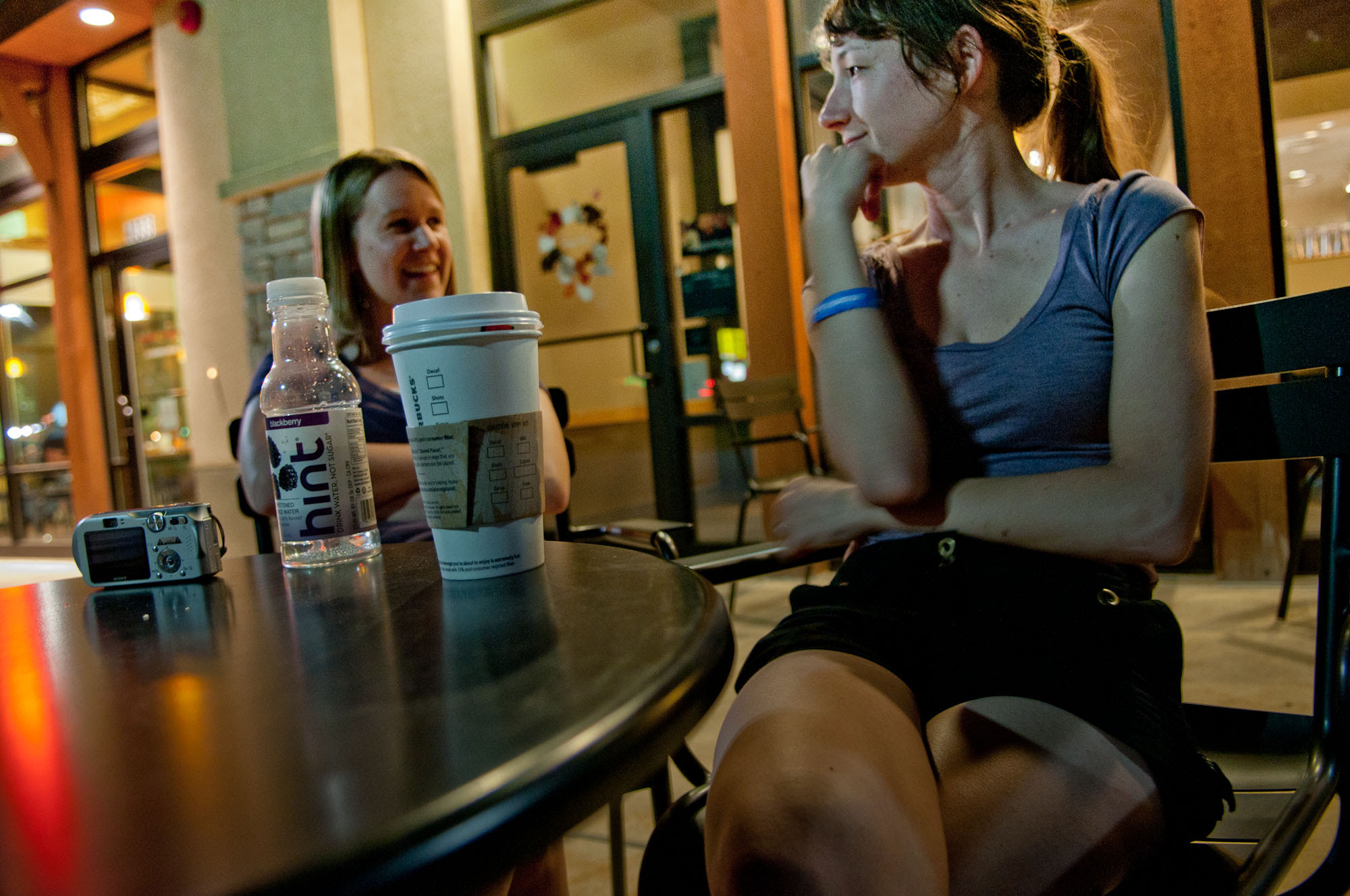 We met up with Amanda and Cevonne at Starbucks on Saturday night. I miss those girls.

It was fun hanging out with them. They're Brooke's two best friends and we do not see them nearly enough. They even made Starbucks palatable for this hipster. 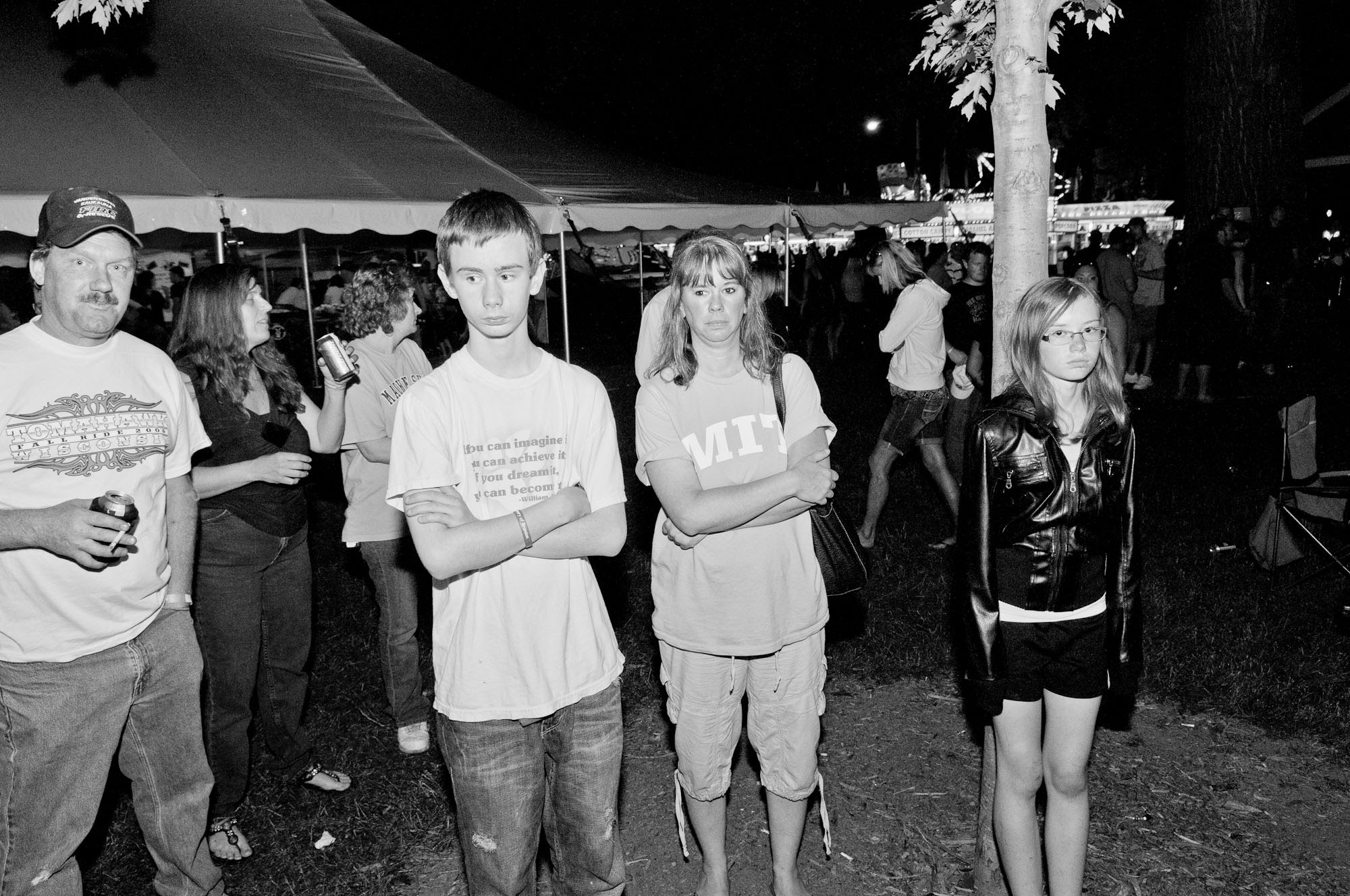 Blake and Scott went back to Cheesefest later that night to finish off our last beer ticket. I stayed home because I was tired, but apparently the second night was more fun. 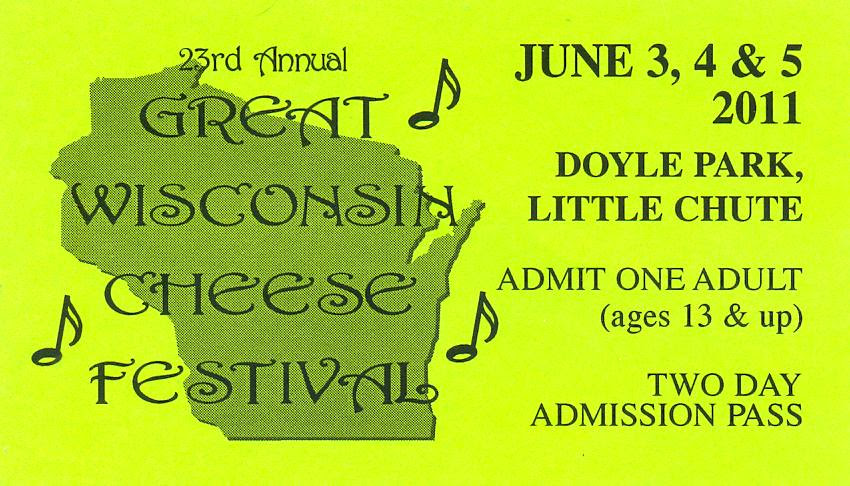 We were lucky enough to have two day passes, so there was no reason not to go a second day. 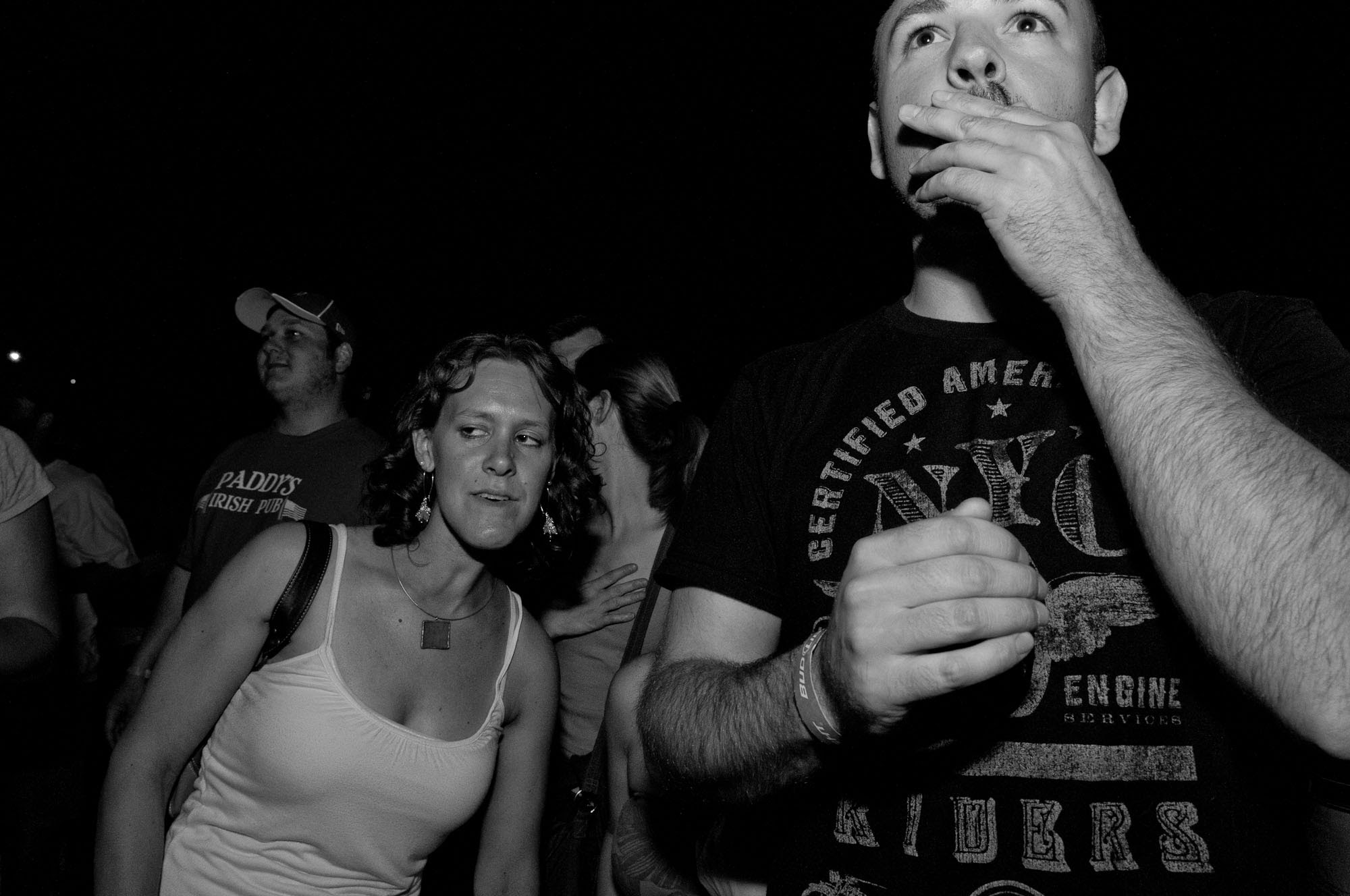 I'm shooting a wedding in a few weeks, so I wanted to test my flash photography skills. I'd prefer to shoot everything using natrual lighting, but at times that's impossible. I think these photos turned out pretty well. 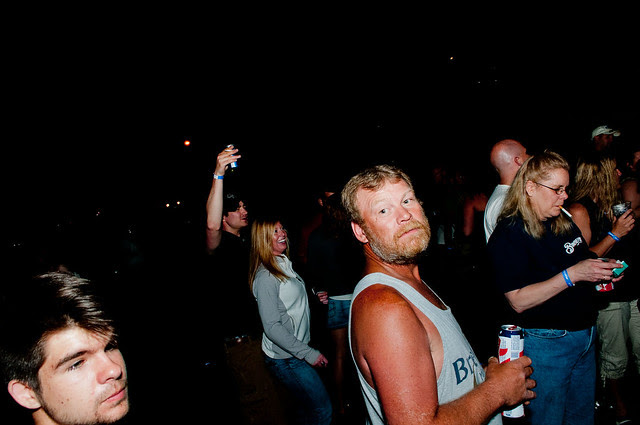 This night wasn't as fun as the first night, though I did enjoy the multitude of cock rock classics.

Nothing like photographing unsuspecting people while they're rocking out to Guns n' Roses "Welcome to the Jungle." 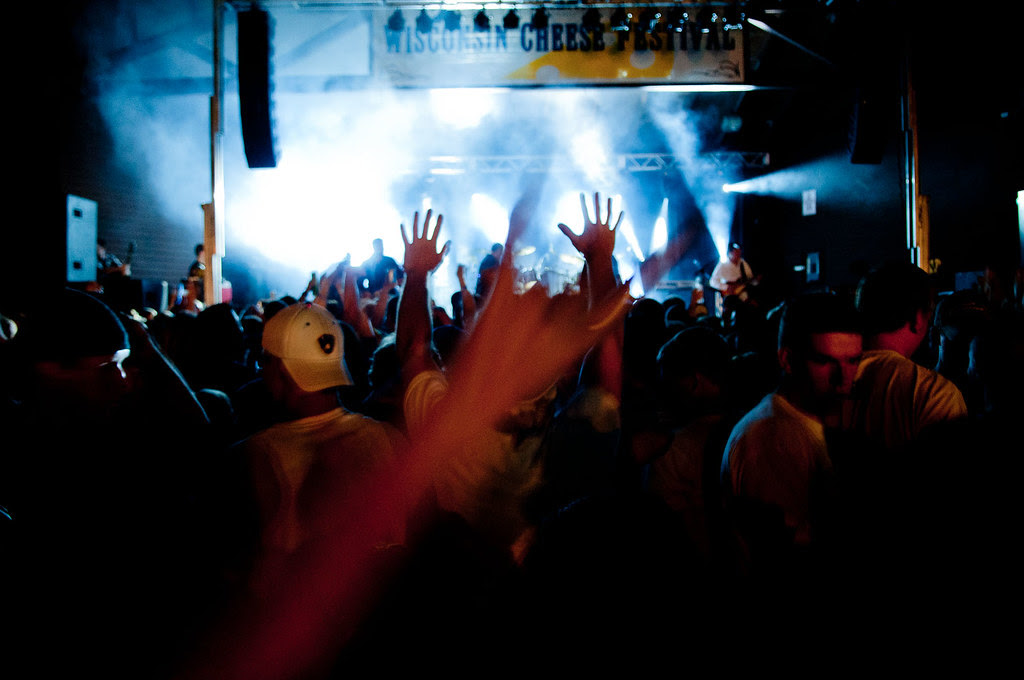 I don't have a good photo of this, but every few minutes, girls from the crowd would jump on stage and shake their thang. It was quite...hilarious. 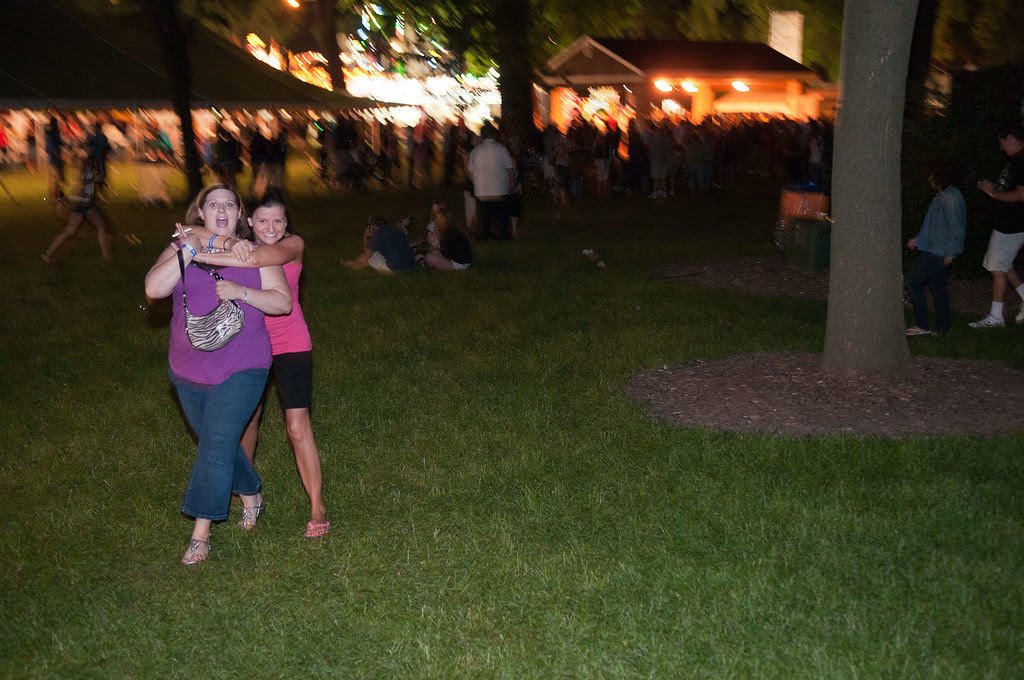 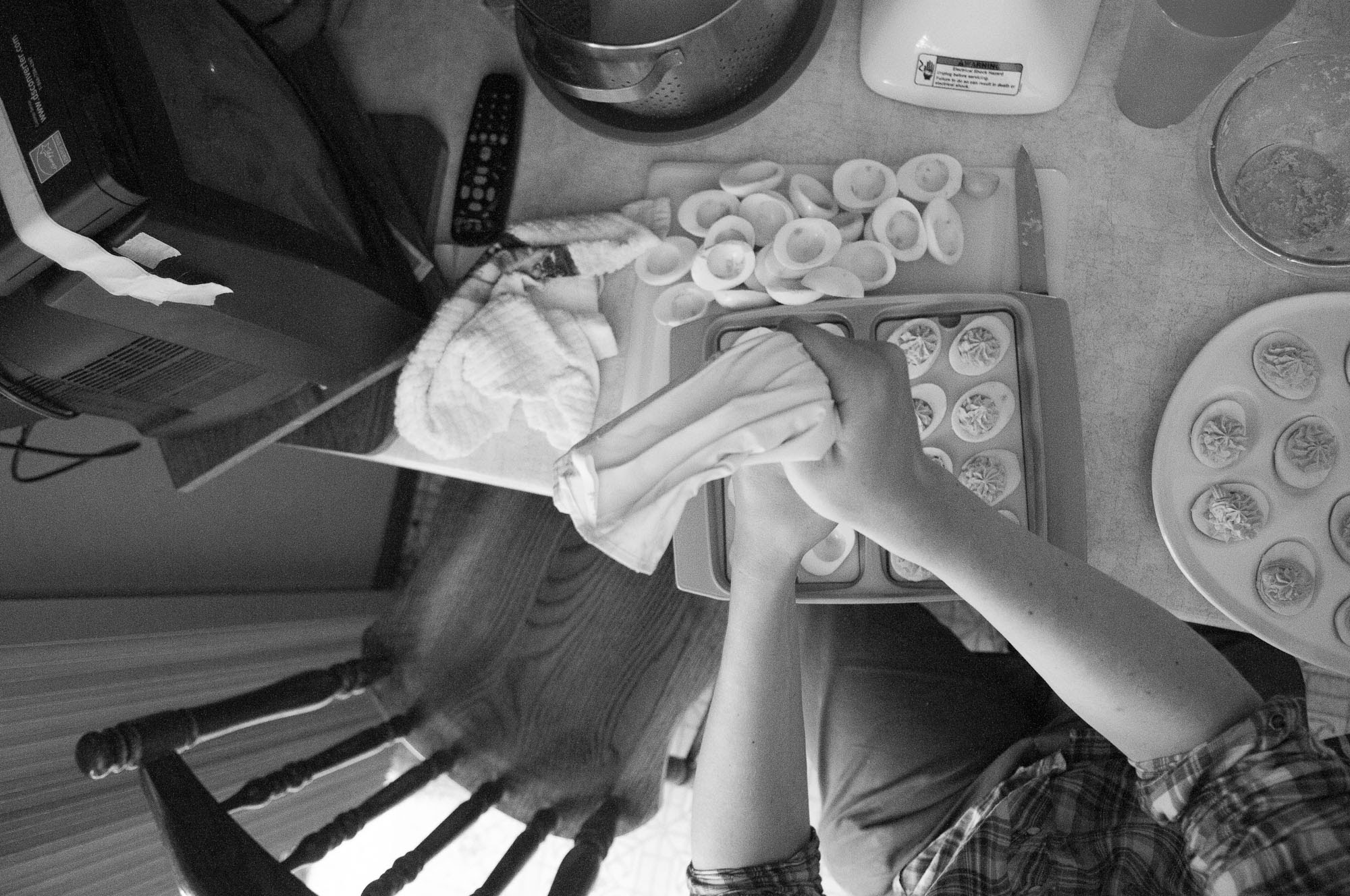 On our last day in Little Chute we helped out with some of the food for Blake's graduation party. Scott made deviled eggs.

I thought I overdid the salt, but they turned out OK. 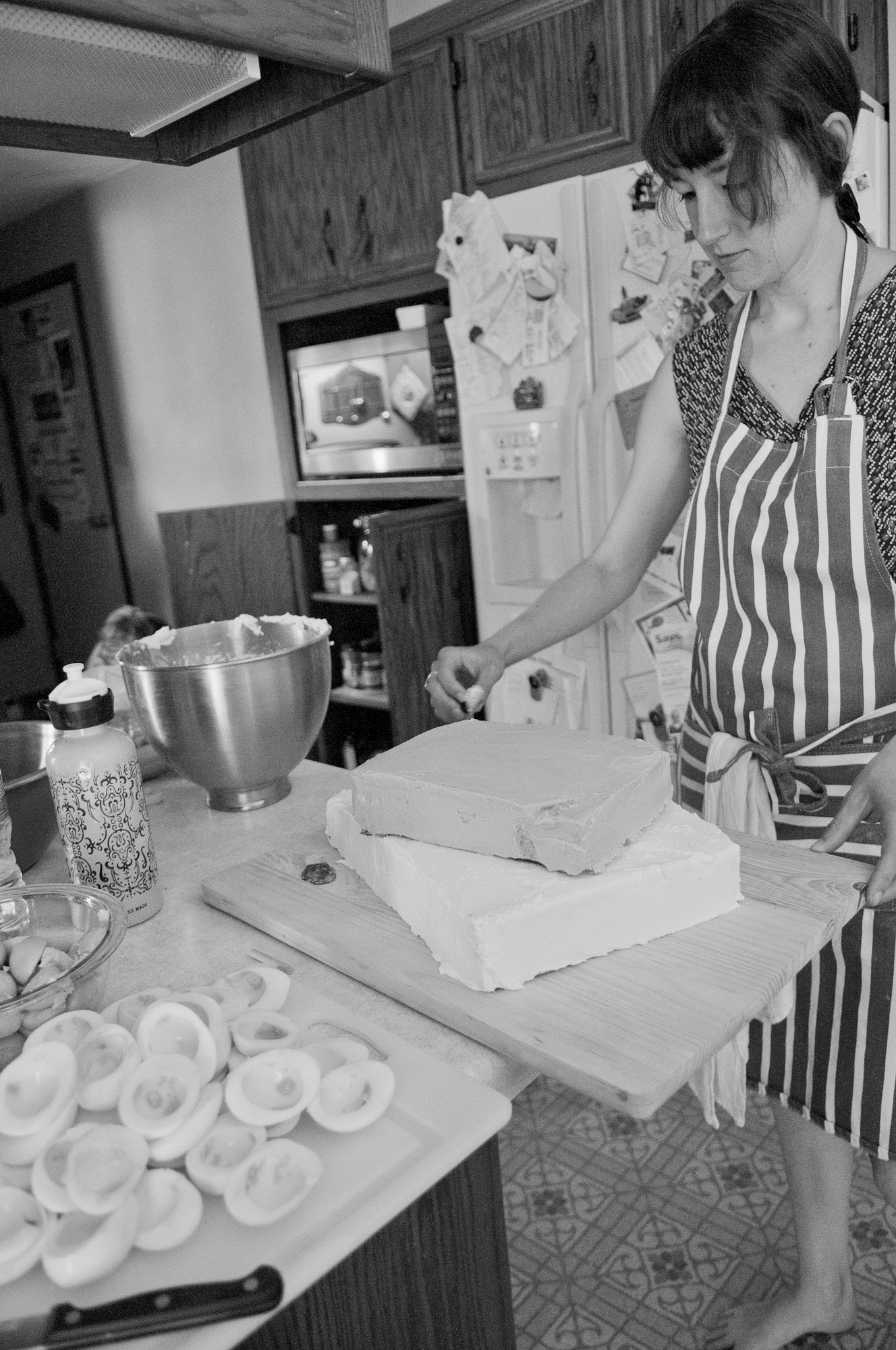 I made Blake's cake. I get real excited when I have a cake to make and have a picture in mind of how it gets going to look. When I can tell it's not going to look the way I originally thought it would I stress myself out and swear that I will never decorate a cake again.

I tried really hard not interfere in the cake decorating, but near the end I had to help. Brooke had gotten to the breaking point and the cake needed a little TLC. I don't think I actually fixed anything; might have actually made it worse. 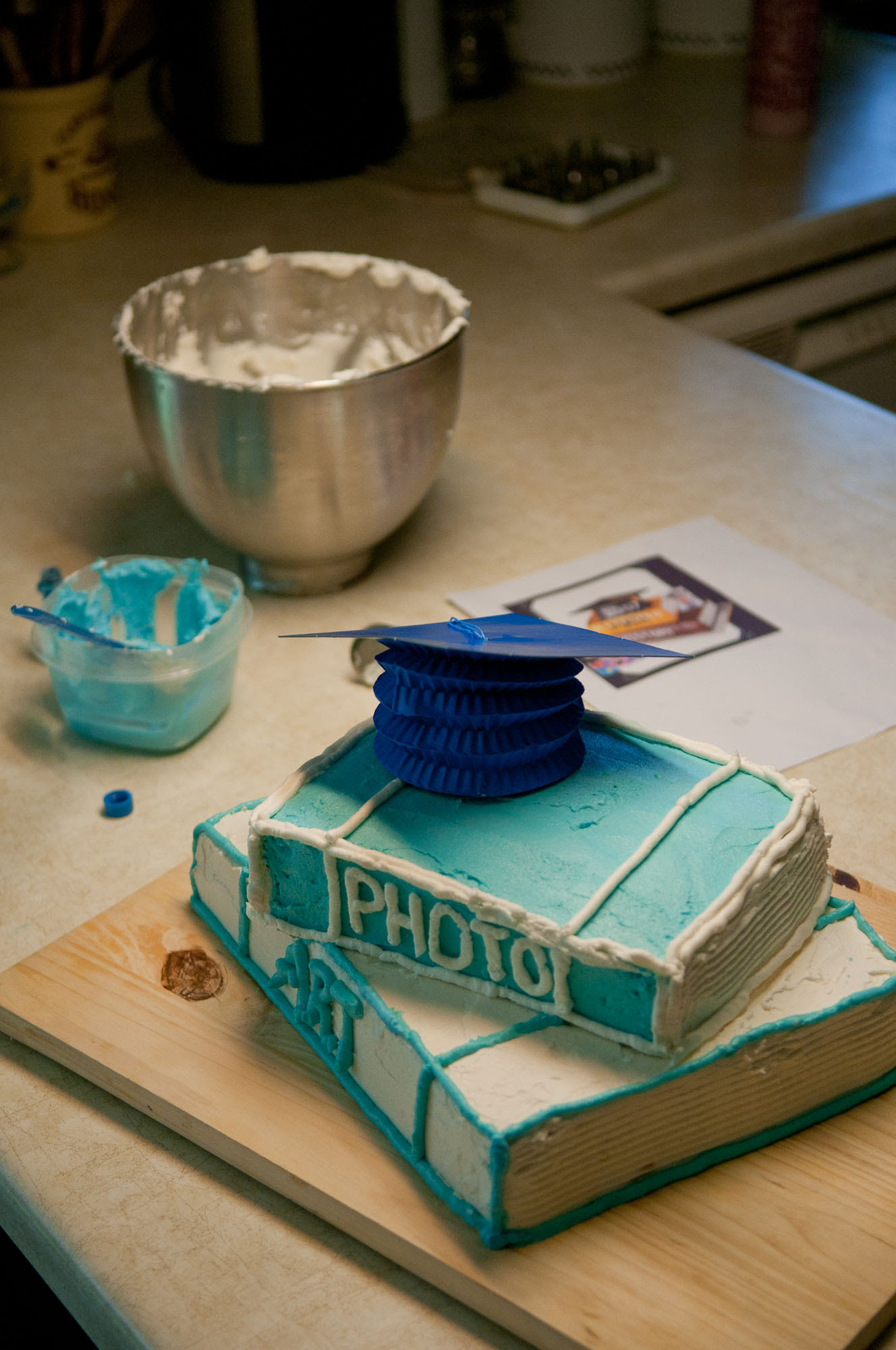 The picture makes it look better than it does in real life.

The silly double-white lines are my doing. Sorry cake. 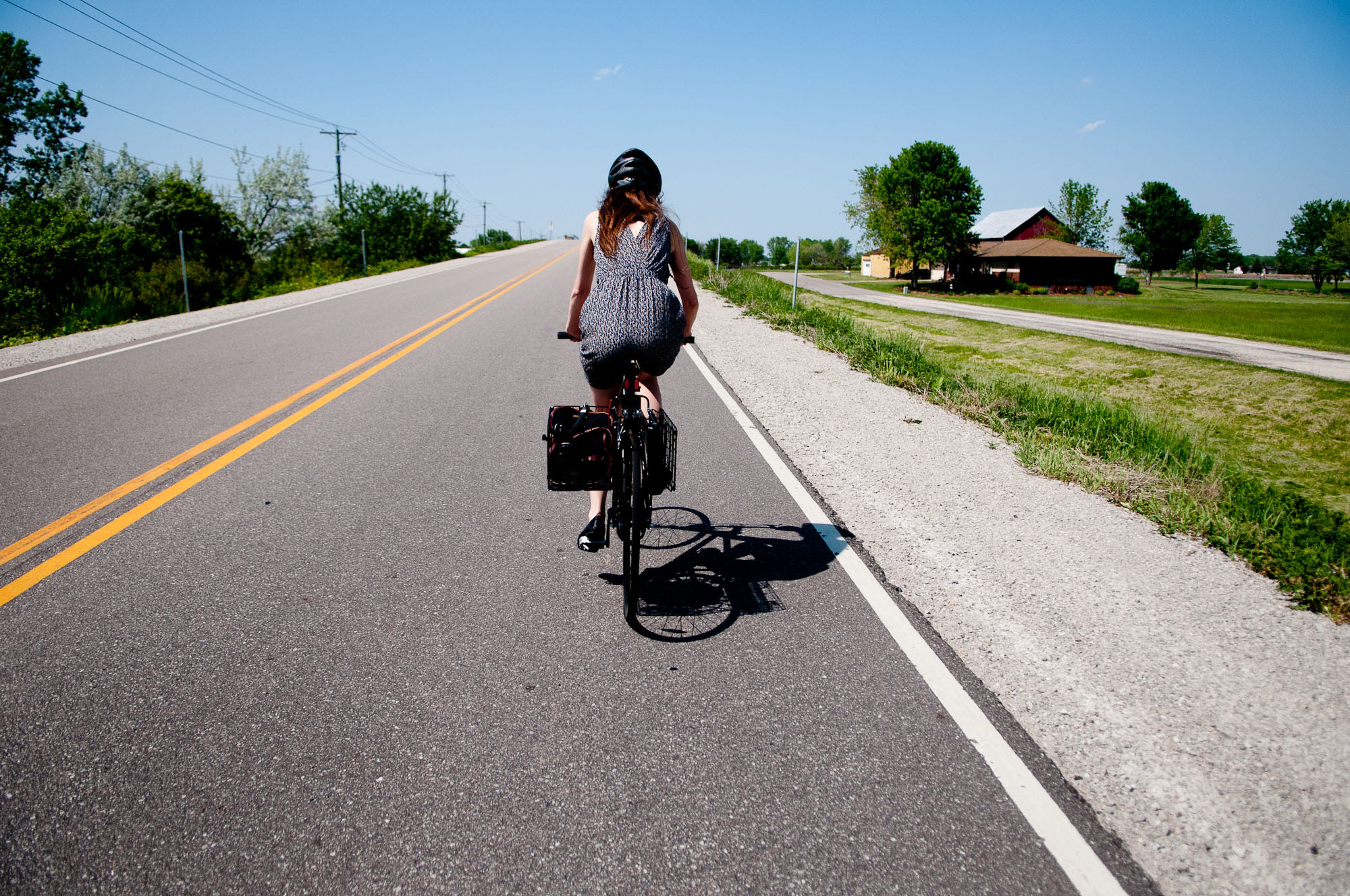 We headed to his party a short distance away. I love that everything in this town is a 5 minute bike ride away.

By everything, she means nothing. 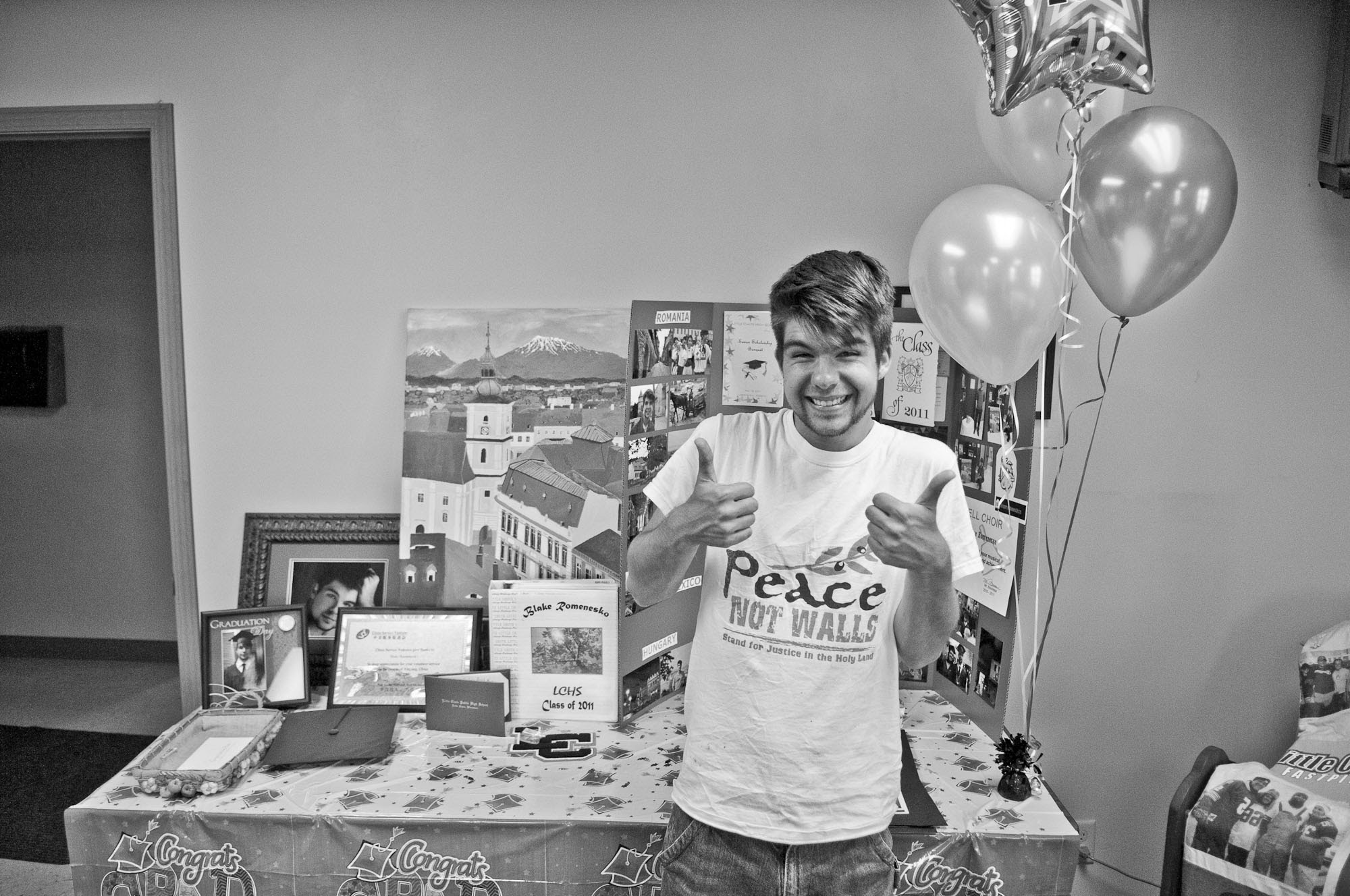 Yes, he is still pretty excited. 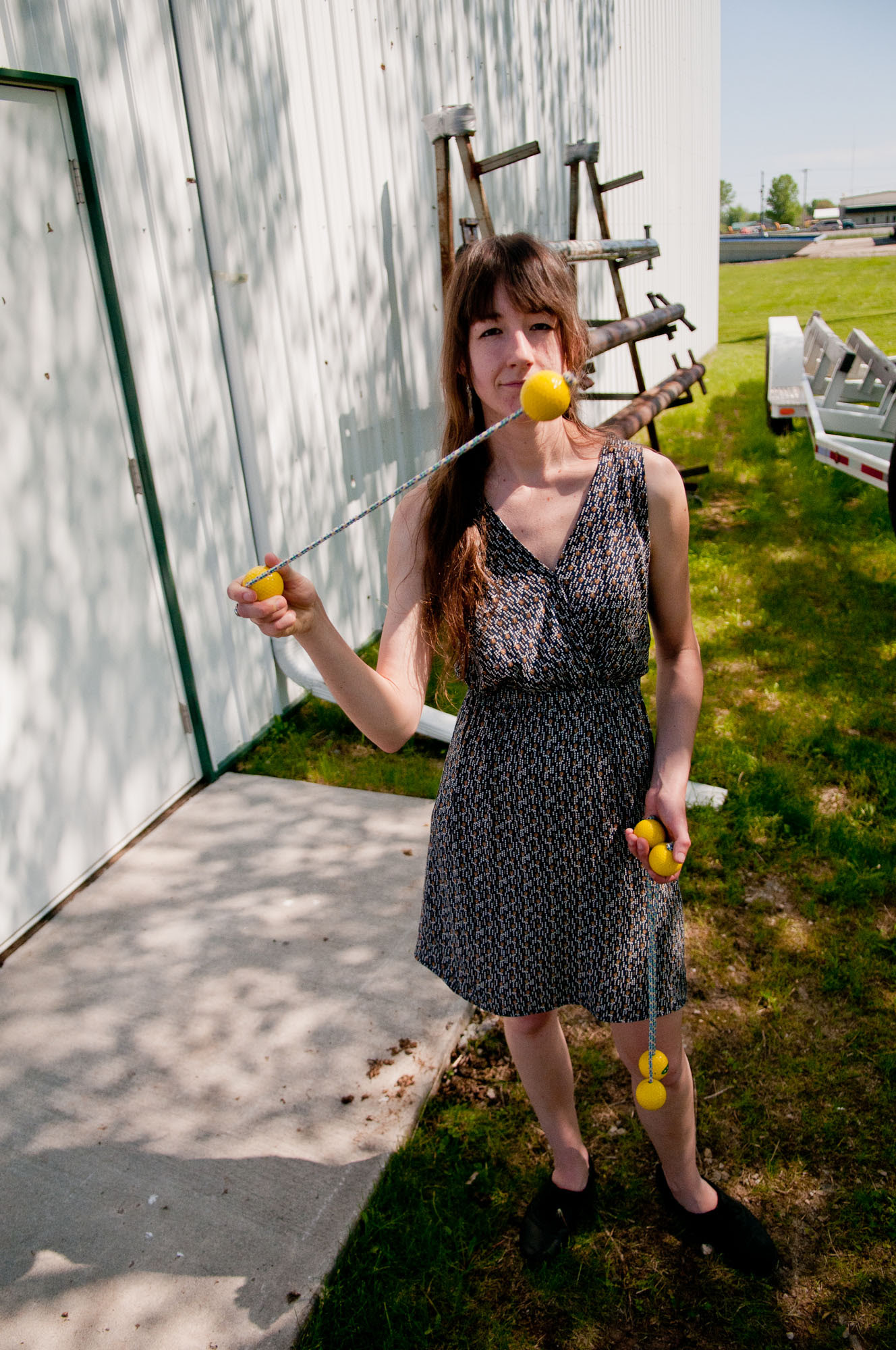 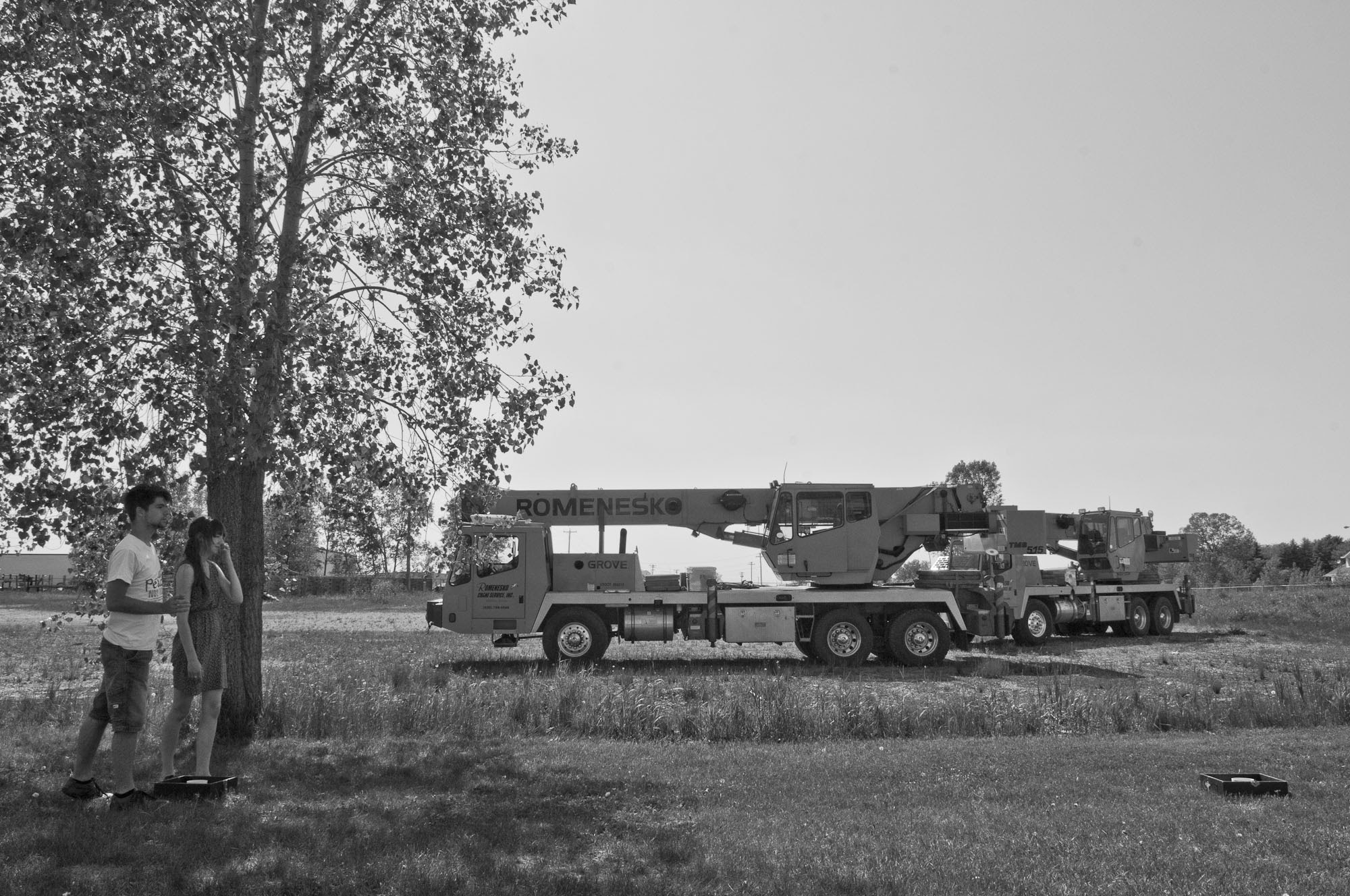 Blake and I played yard games. 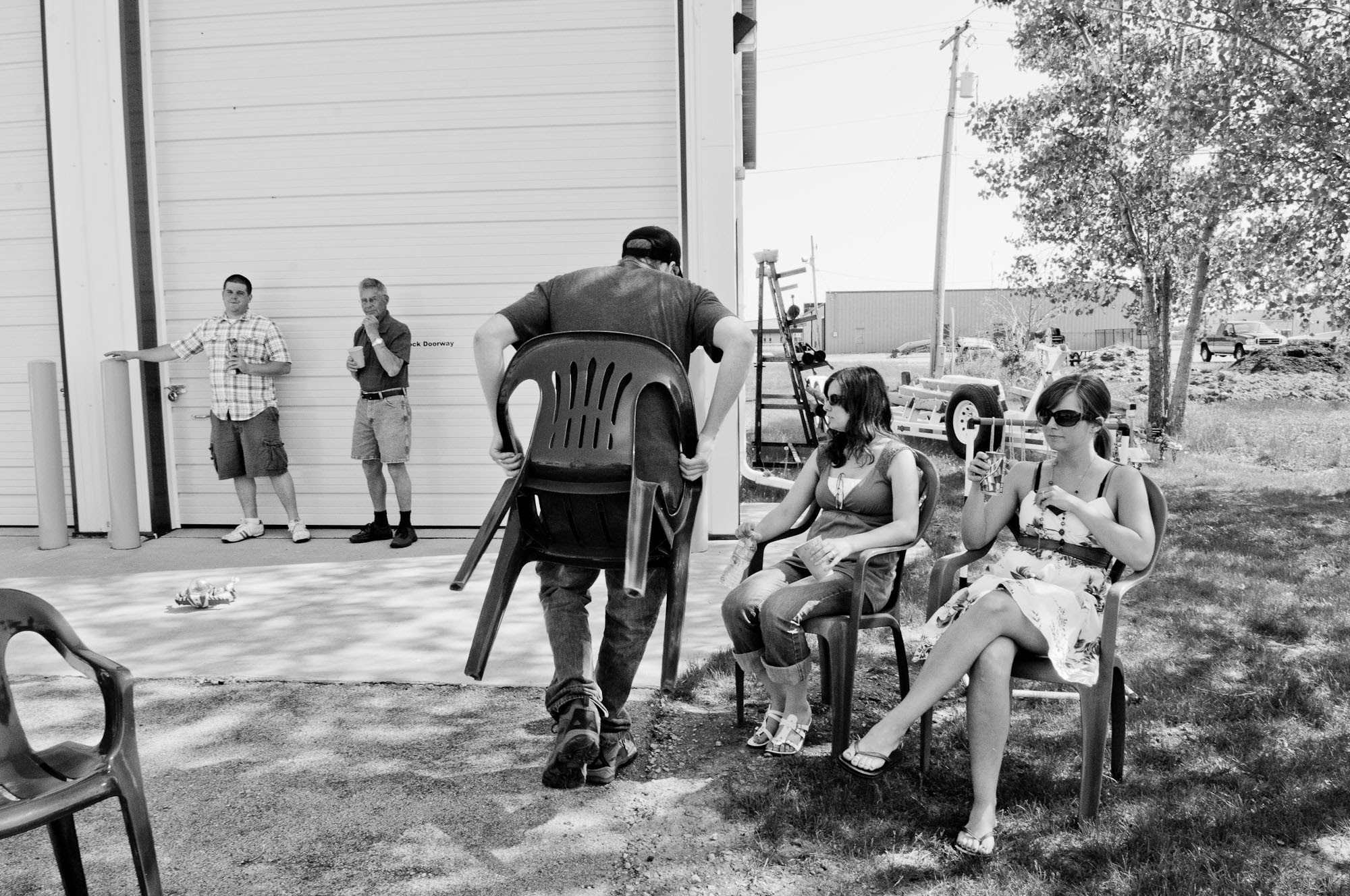 While I took photos of the goings on. 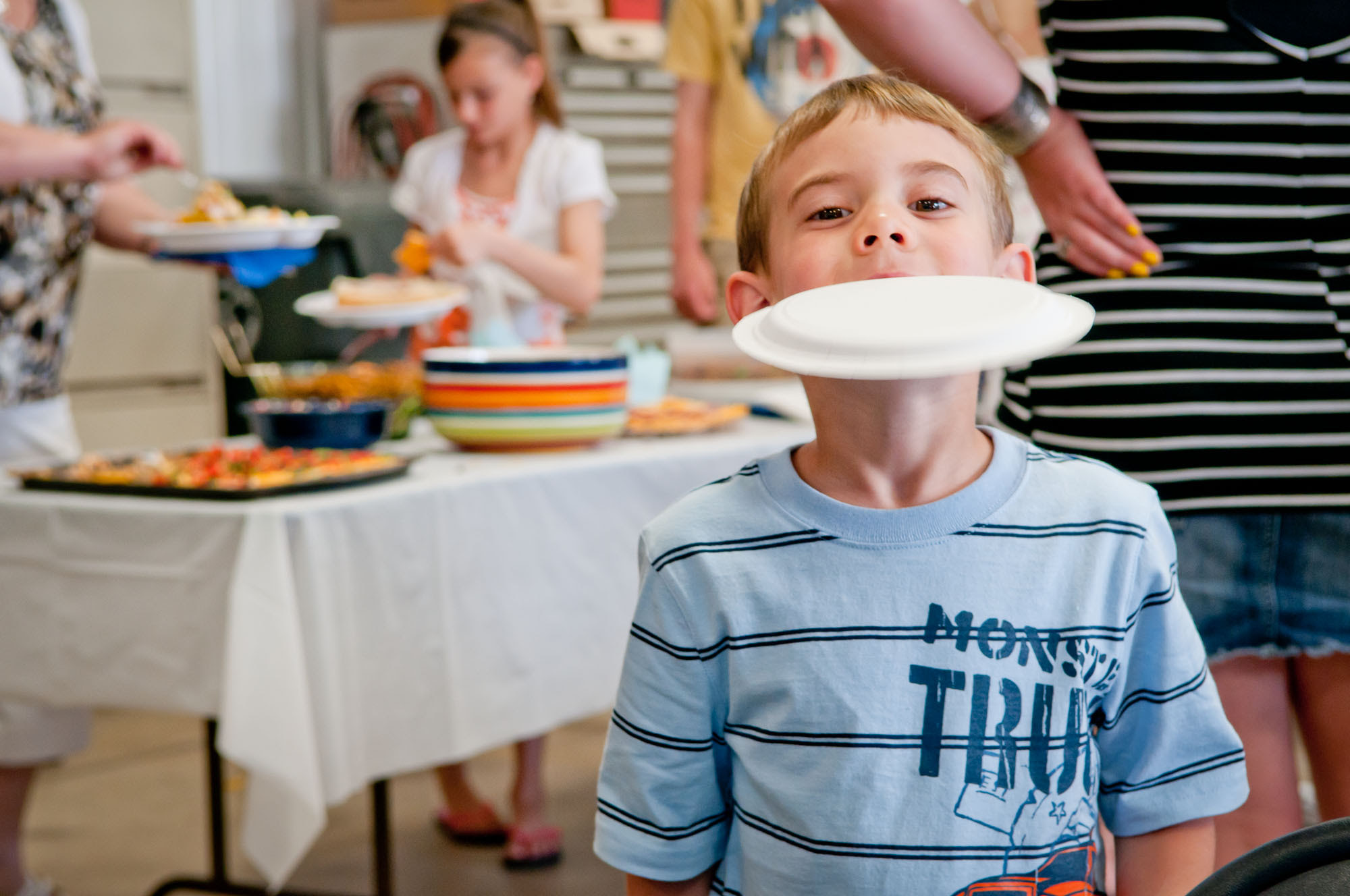 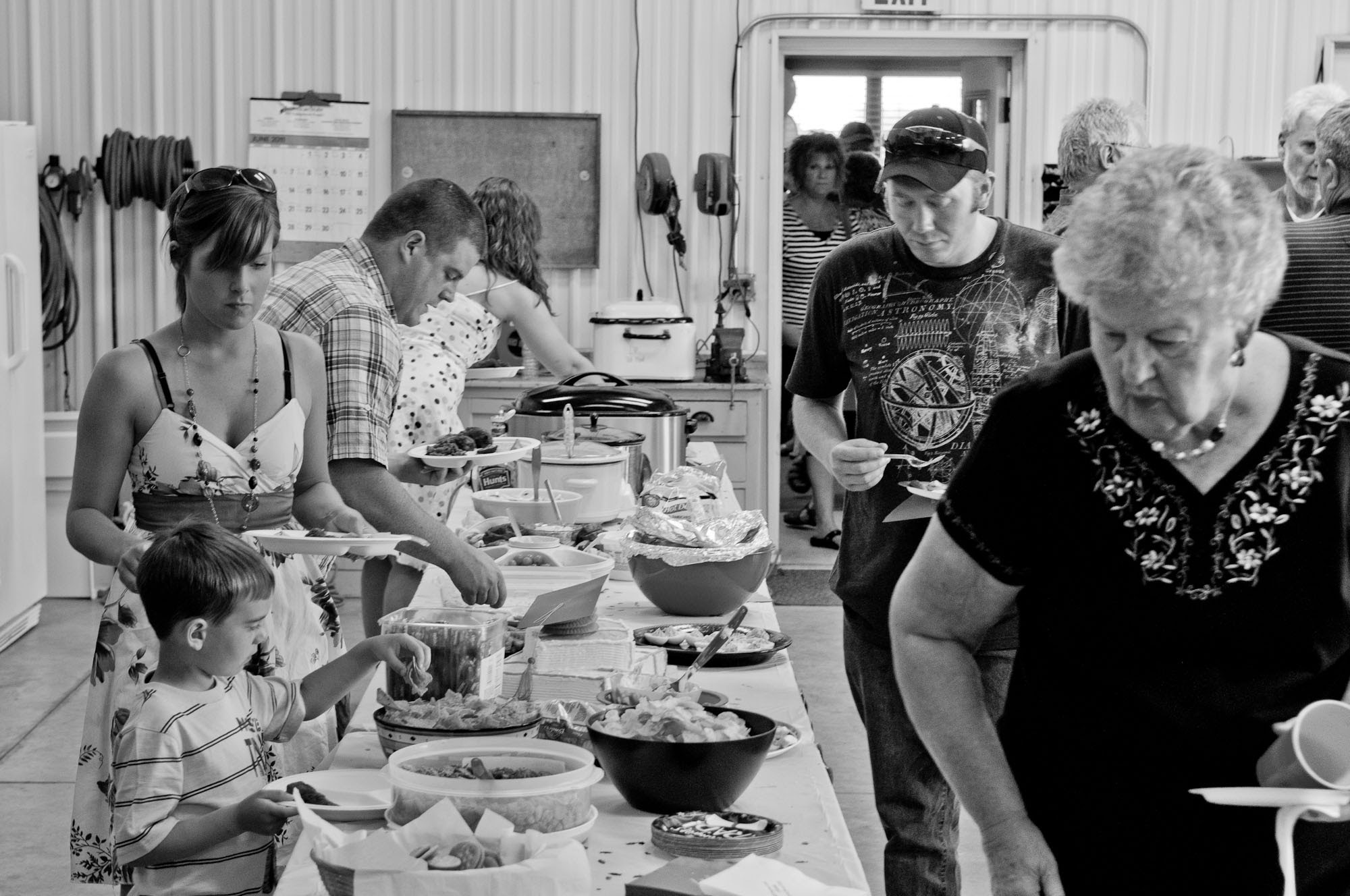 I also love that at every family get together we have a pot luck. If only everyone lived closer to us, we wouldn't have to find a caterer for our wedding.

We don't need to find a caterer, but that's a different story. 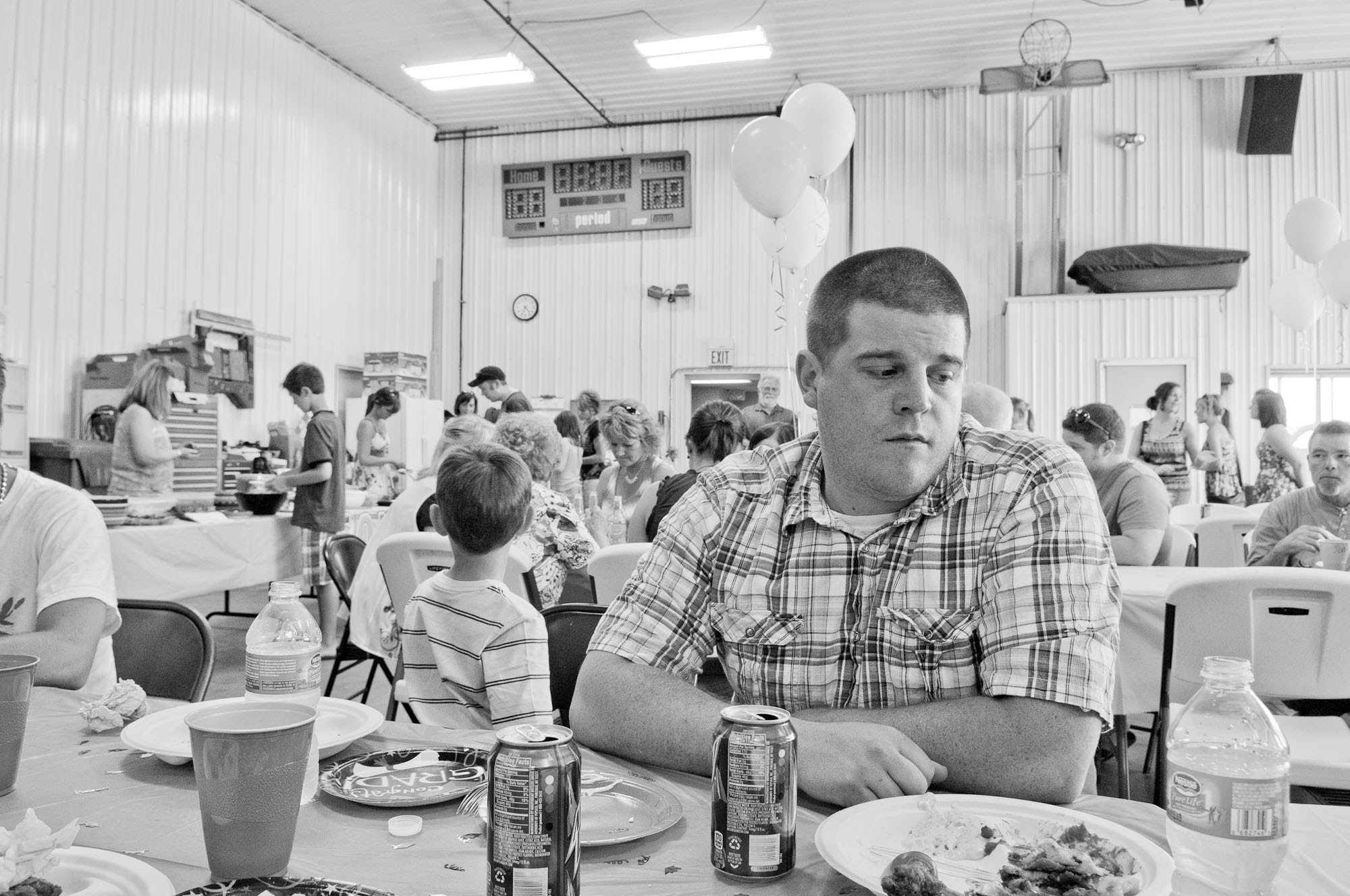 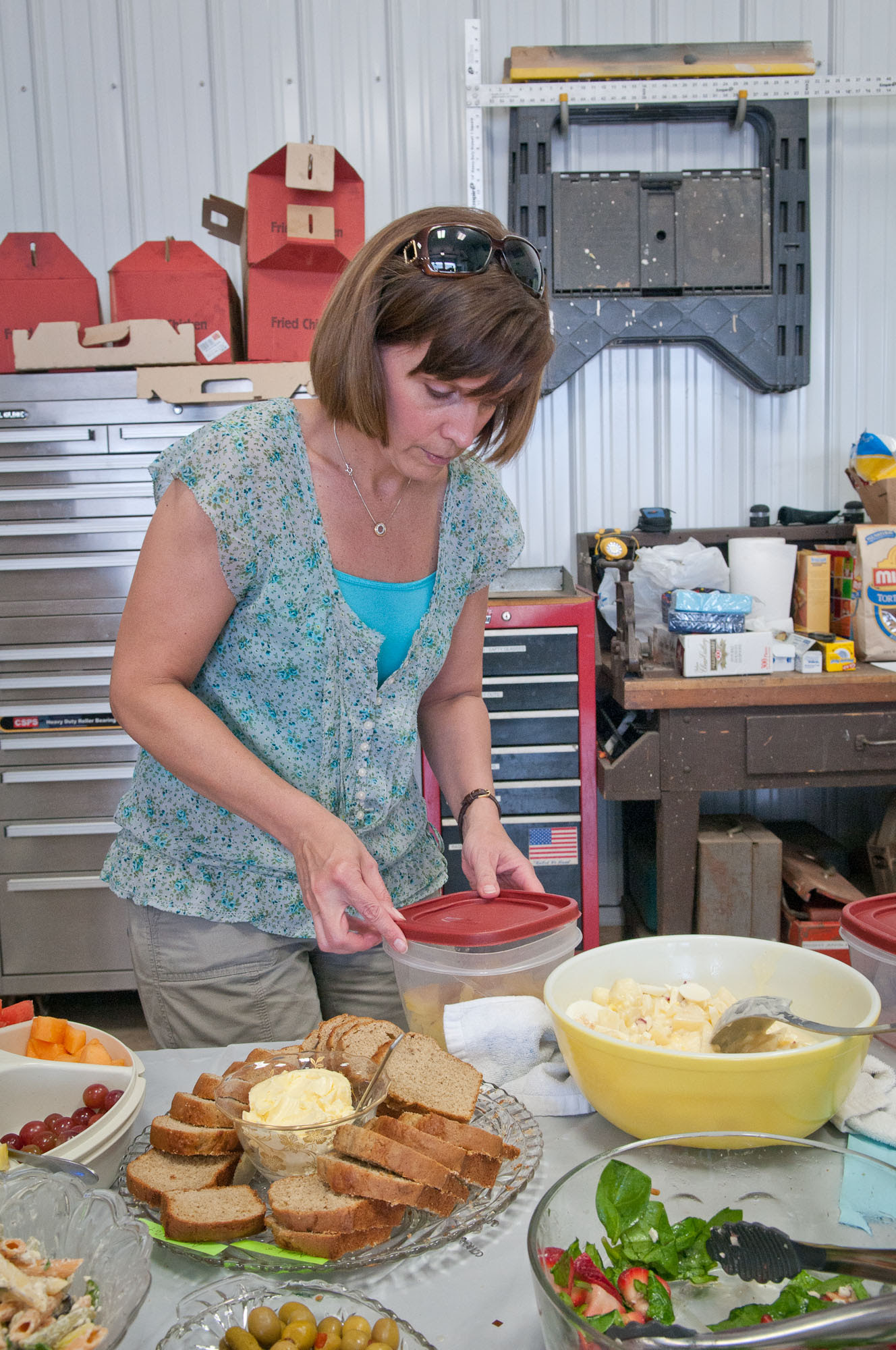 We grabbed a bunch of food to go before heading home. 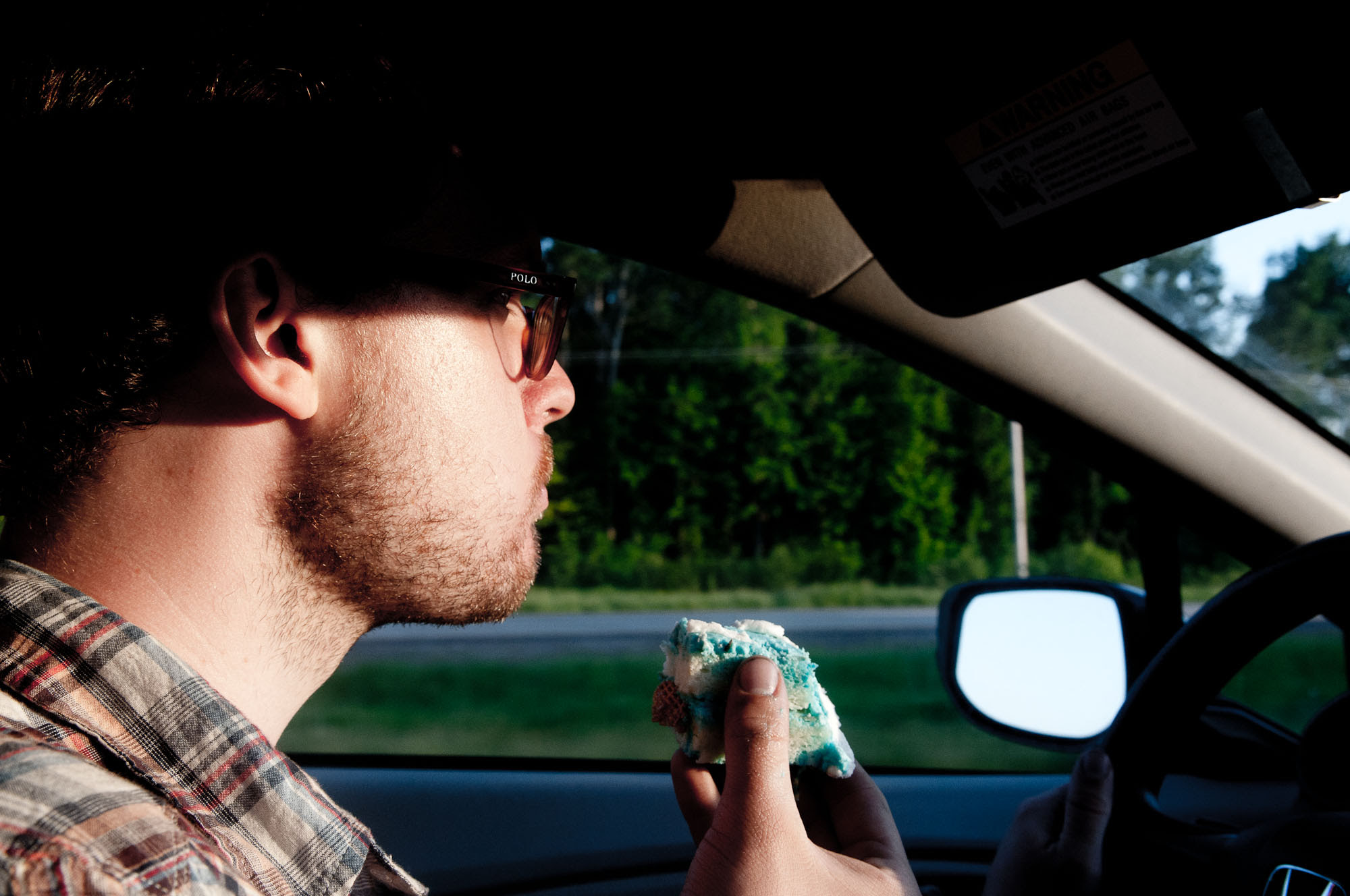 Scott enjoyed my cake in the car.

That had to be the sweetest cake I've ever tasted. It was good, but holy sugar overload, that frosting was tooth decay waiting to happen. 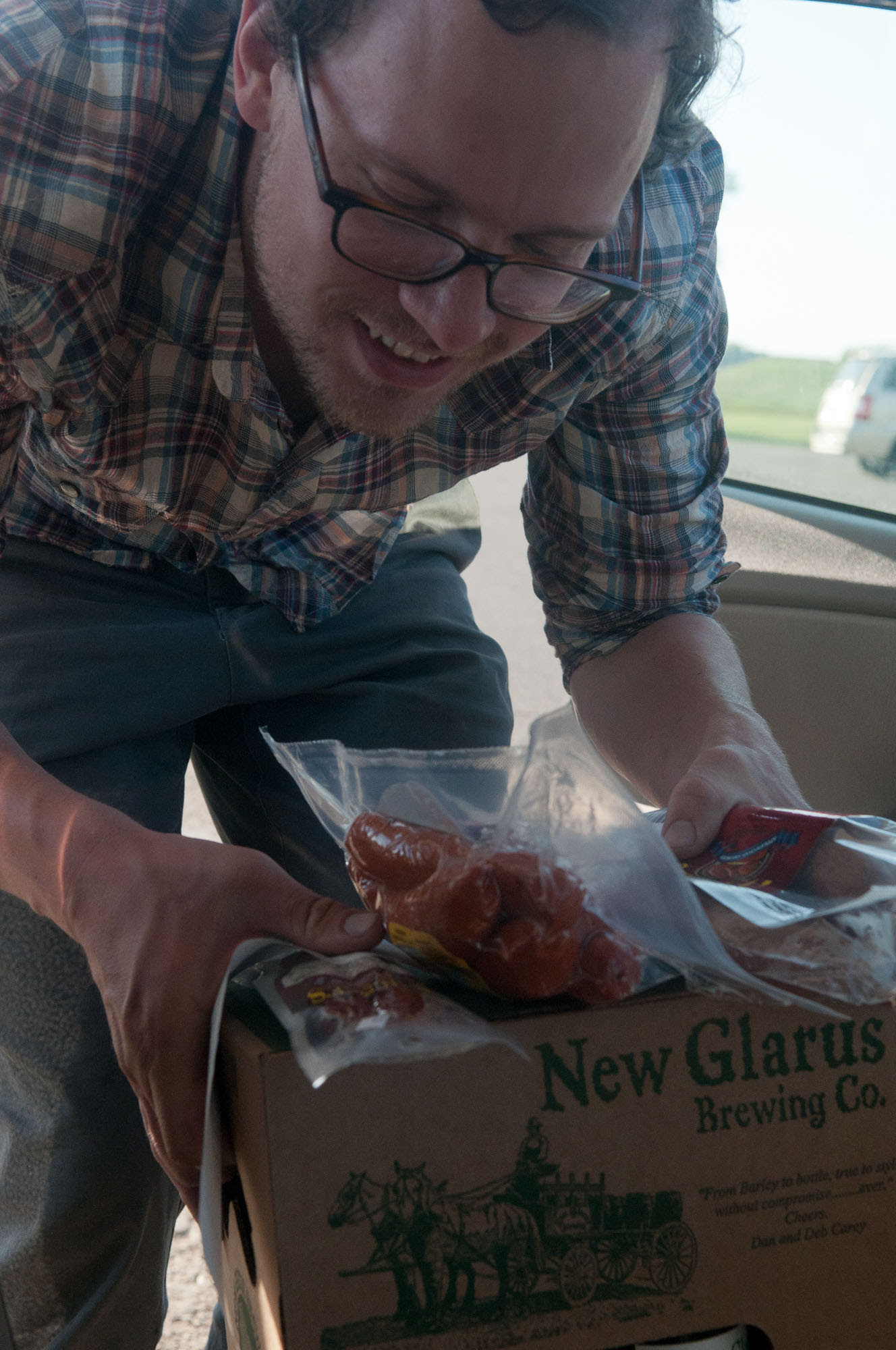 We were still in Wisconsin when we stopped for gas. I told Scott to run in and get some New Glarus beer. He comes back with a 12 pack of Spotted Cow and 3 packages of meat.

That wasn't any meat. Those were Nueske's sausages. The New York Times call's their bacon the caviar of pork products. I didn't get the bacon this time, but the smoked wieners, kielbasa and landjaeger were Usinger's-good. 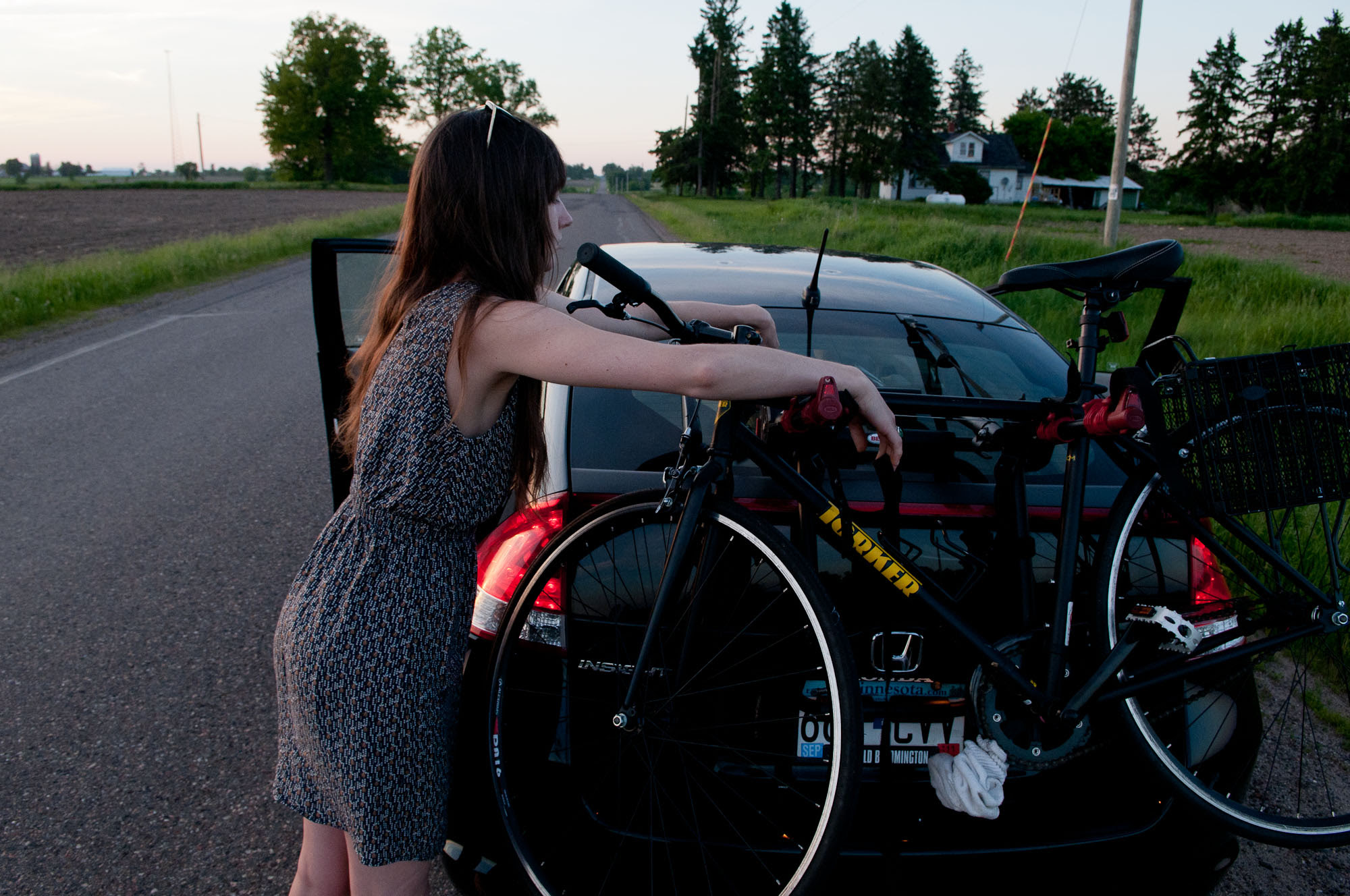 We had to make a few stops to fix our bikes before getting home.

You've got to love a girl who can fix things (or at least attempts to). The bike's added another ding to the car. With the endless small nicks on the car, we're probably going to buyout the lease on the Insight. 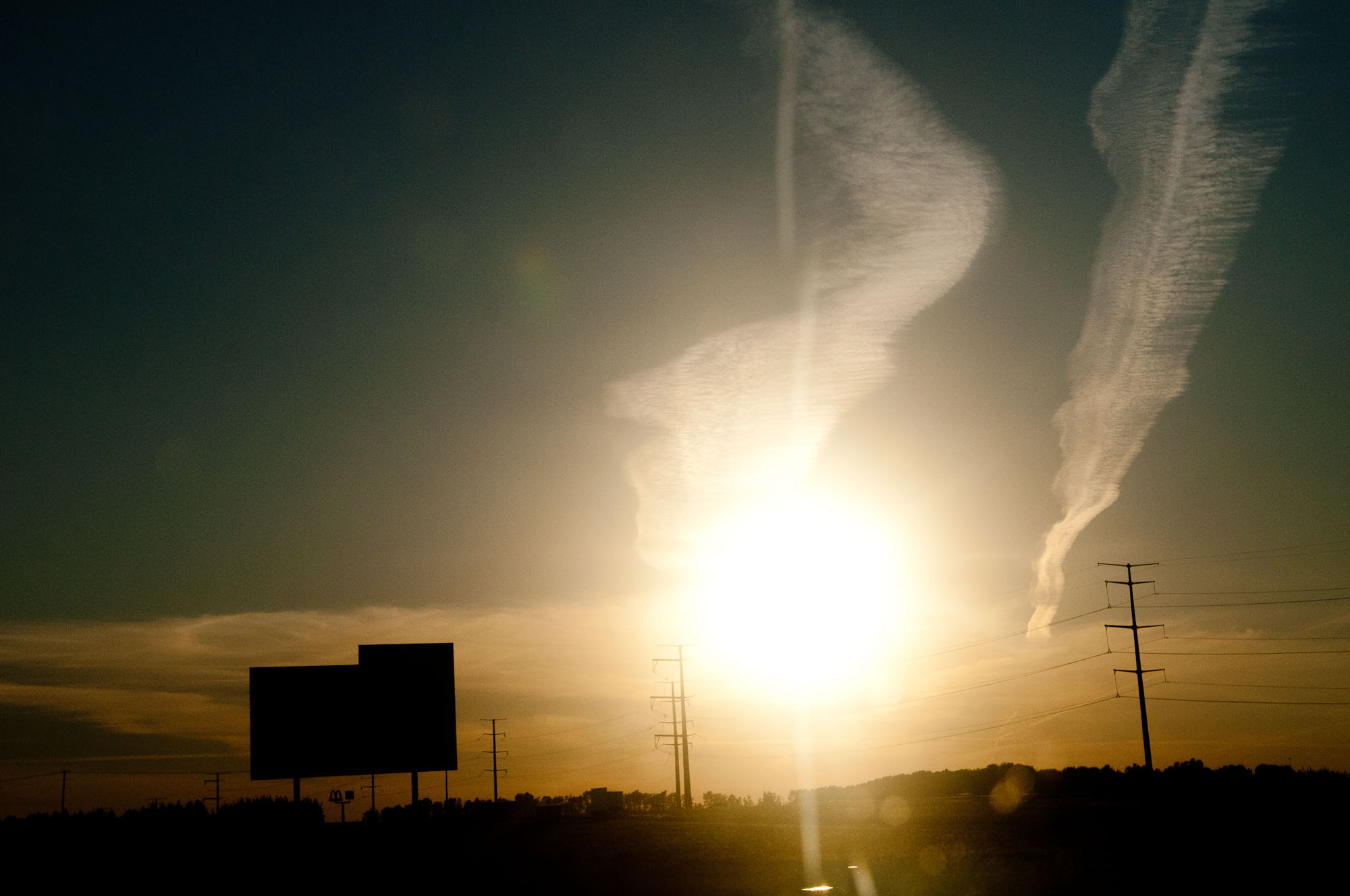 Before long, we had made it to the Wisconsin border. We were nearly home after having a great Wisconsin cheese weekend.

Blake said…
Nice pics of the party. Way to make it look 10 times cooler than it did in real life. My friends said the cake was delicious. Little Chuters dont get homemade cake often and kids love sugar.
7:13 PM, July 05, 2011

Amanda said…
I'm so excited as always to have made the blog again. :) I only wish we had had more time together so I could have been featured more! Ha...and spent more time with you two of course. I miss you too.
Where was Blake's party? Looks like a nice area. Hopefully I'll see you guys again this summer.
7:43 PM, July 10, 2011

By Scottie and Brooke Tuska December 01, 2018
While driving through the Linden Hills neighborhood with the trees all lit, Meadow said, "It's beginning to look a lot like Christmas. Oh that's what the song means!" Since it was the weekend after Thanksgiving we had to make that a reality. We decorated our little place with the Christmas decorations that made the cut in our downsize. You didn't think we'd get rid of our collection of nutcrackers? Did you? My good friend and realtor Nate invited us to his companies Christmas party. Meadow was super excited. Upon walking in they had her favorite cutouts for photo ops. Meadow was also super pumped to pick her own cookies. First we ate said cookies. While waiting for our turn to see Santa Meadow wrote him a letter. Both kids did great. Though none of them smiled. Nate later asked me, "Is Santa smiling?" Indeed he was not. We were number 87. I'm sure he was done with smiling by number 50.
Post a Comment
Read more

By Scottie and Brooke Tuska February 14, 2021
Along with Meadow going back to school and needing masks, I also made her some headbands and attached buttons to hold the straps.  Perfect so her little ears don't get hurt. The kids requested Chocolate Rye Pancakes for this Valentine's breakfast. So sweet. In two ways. I guess Brooke got Meadow a Valentine's shirt. Nope, I got her the fleece lined leggings with hearts on the knees. She already had the shirt. Mmmm...the kids' favorite. You know it's cold outside when you can't see out the window.  Meadow was up to her crafty self and made Theo a batman mask. She made a wrong cut and patched it up otherwise it looks awesome. I made Brooke some peanut butter-peanut butter cup-chocolate ice cream for Valentine's day. It was delicious. When you live in a small place your bedroom becomes your sewing room. I also prefer sewing standing up.  I'm not sure if she's complaining, but I love our small footprint condo lifestyle. Do not miss our big old house. N
Post a Comment
Read more

Sisters, a Brother and Walking Chicago

By Brooke June 08, 2012
Summer always seems to mean one thing: weddings. Whether I'm shooting or attending, we're bound to end up at a few every year.  This time around we were heading down to Chicago from my big sister Katrina's nuptials. I feel like all our vacations are centered around a wedding or something wedding related. I wish we could go on a vacation without having to worry about being somewhere.   It also means a few repetitive trips down I-94. There aren't nearly enough unique stops off the interstate. One outlier is Foster Cheese Haus , the only organic Wisconsin cheese shop I know of. Run by the folks behind Castle Rock Organic Farms , we always try to stop by. Unfortunately for us they were closed on Wednesdays, but at least we got to spy on their darling garden out front.    Brooke and I arrived in Necedah. We decided to stop at Brooke's sister Brittany's home along the way to cut the ride in half and get her dressed hemmed.   In
4 comments
Read more