Skip to main content
Labels
Posted by Brooke May 22, 2011 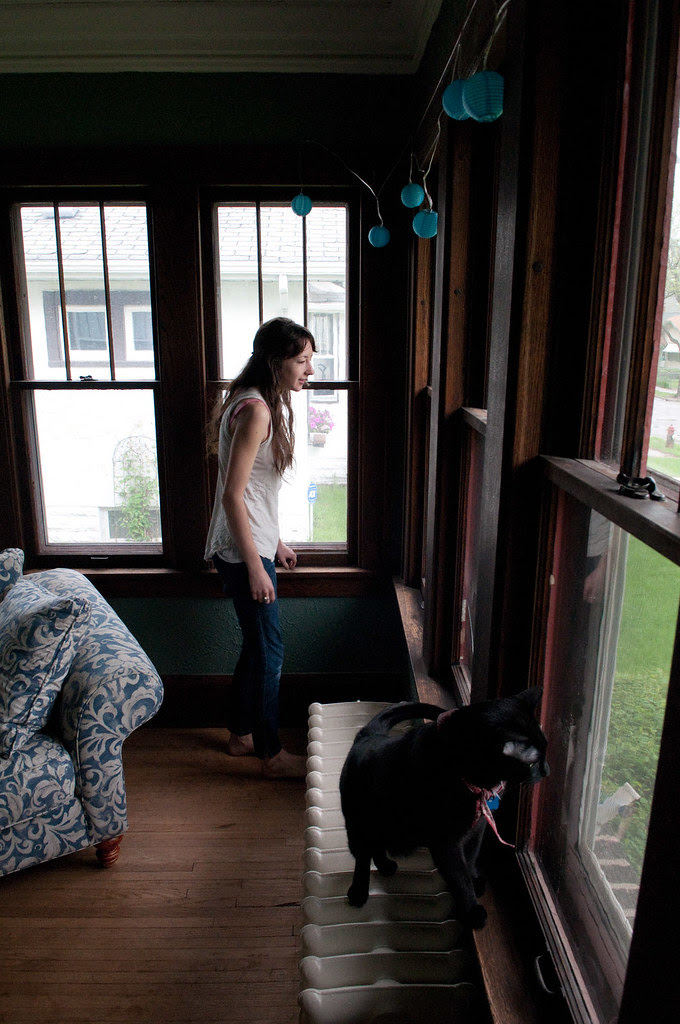 Brooke and the cat woke up only to look out the window, searching for the alley cat. An afternoon shift at the Best Buy. A normal morning. It started so peaceful. I'm not even supposed to work on Sundays. Something was off, Brooke was making good oatmeal. She had to take the car out to Long Lake. It wasn't going to be a normal day. 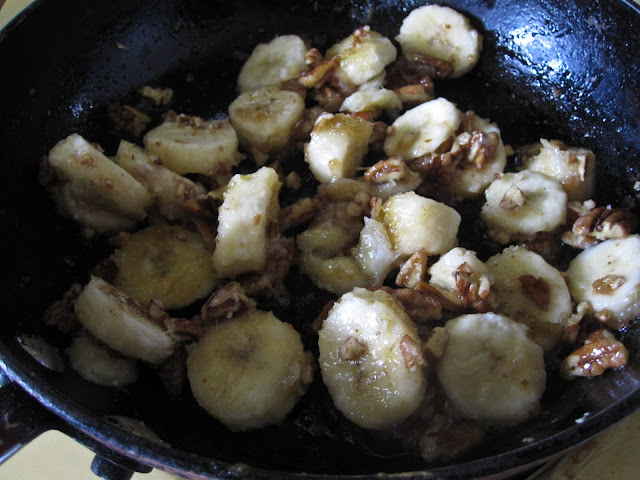 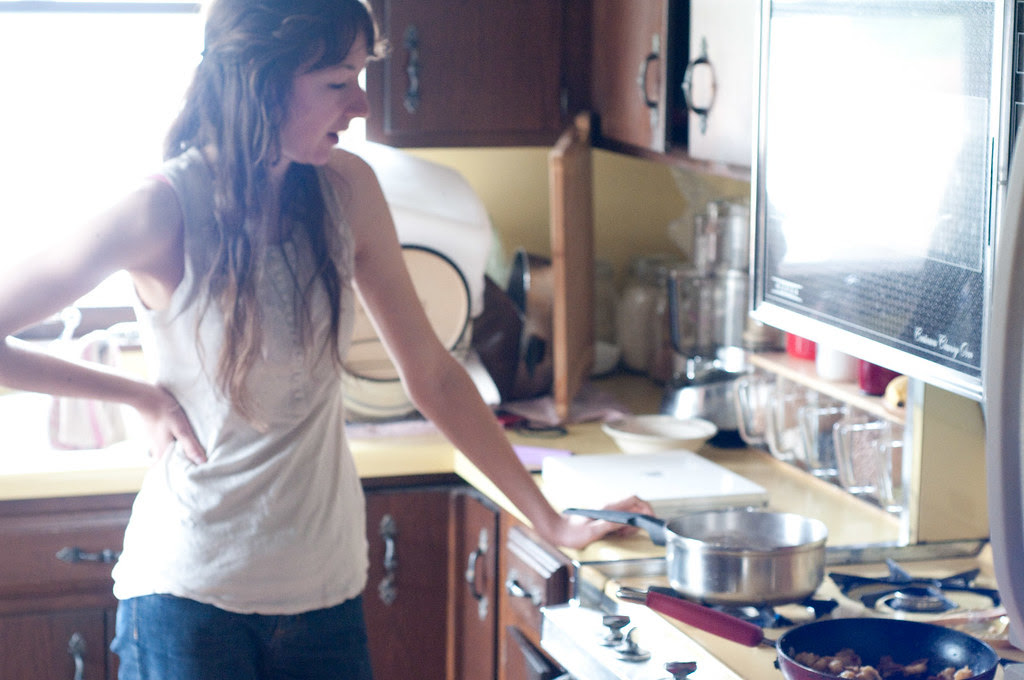 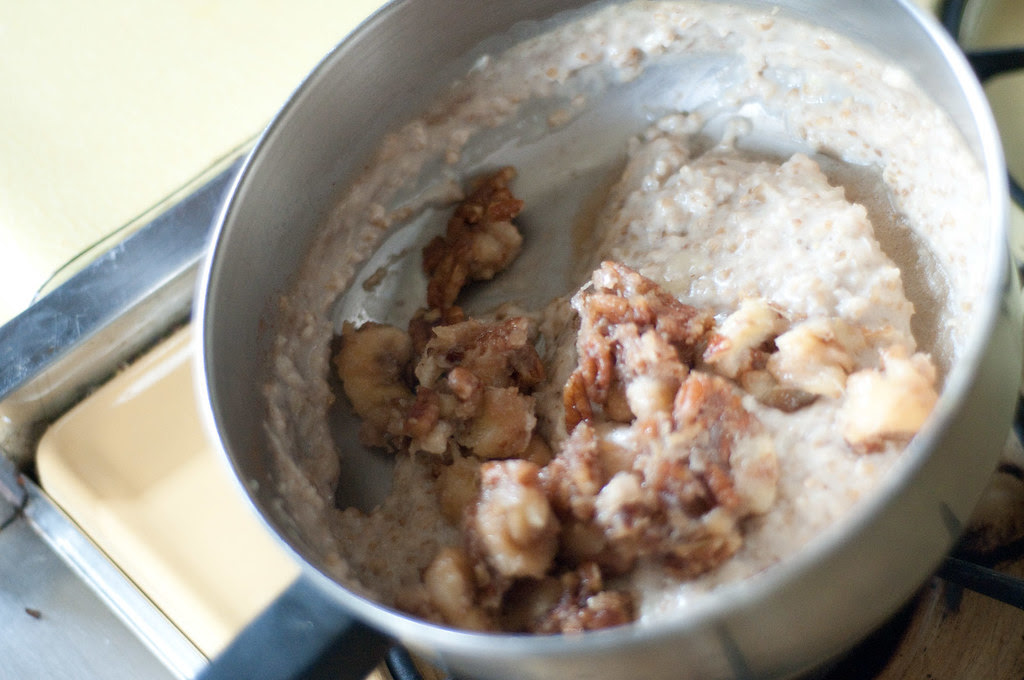 Yes, I actually made good oatmeal. Scott wouldn't stop talking about it. Banana's foster oatmeal. Scott said it would be too sweet for me, but it wasn't. 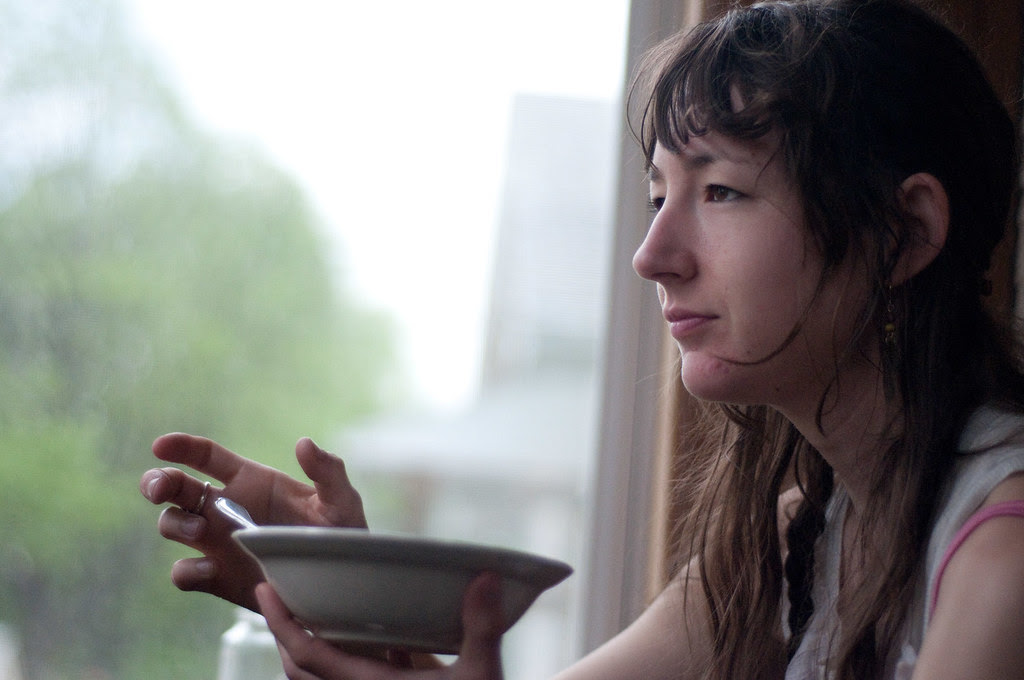 It was actually pretty damn good. The perfect start to a long day at the Brooklyn Center BBY. The bananas were carmalized goodness, a hint of sweetness on top of a milky oatmeal base. It was almost as good as my oatmeal. 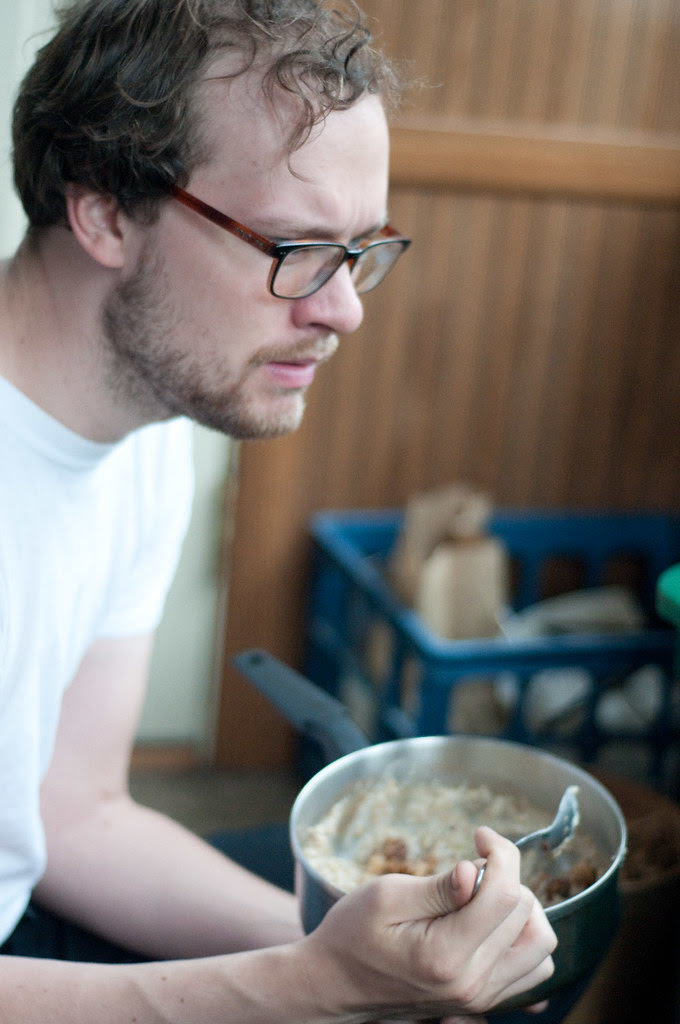 Then 5 minutes before I had to leave for our car appointment Scott says they might give me a loaner car. I had to quickly take everything out. 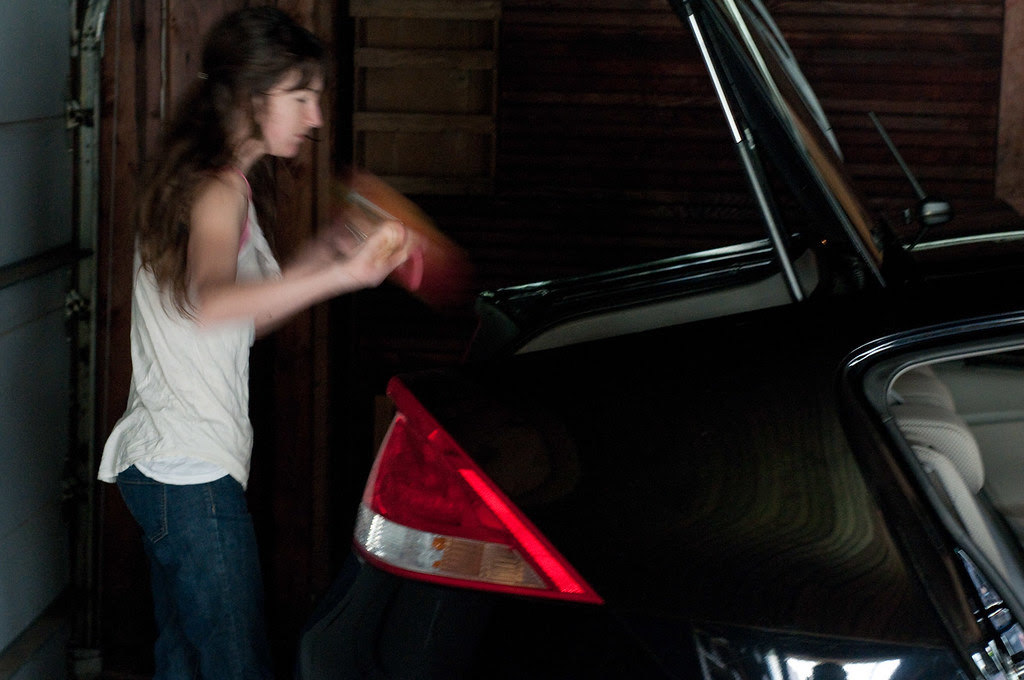 She was p*****. It wasn't like I had planned on this. I just remembered that they might take the Insight. Either way it was a good excuse to clean out the car. 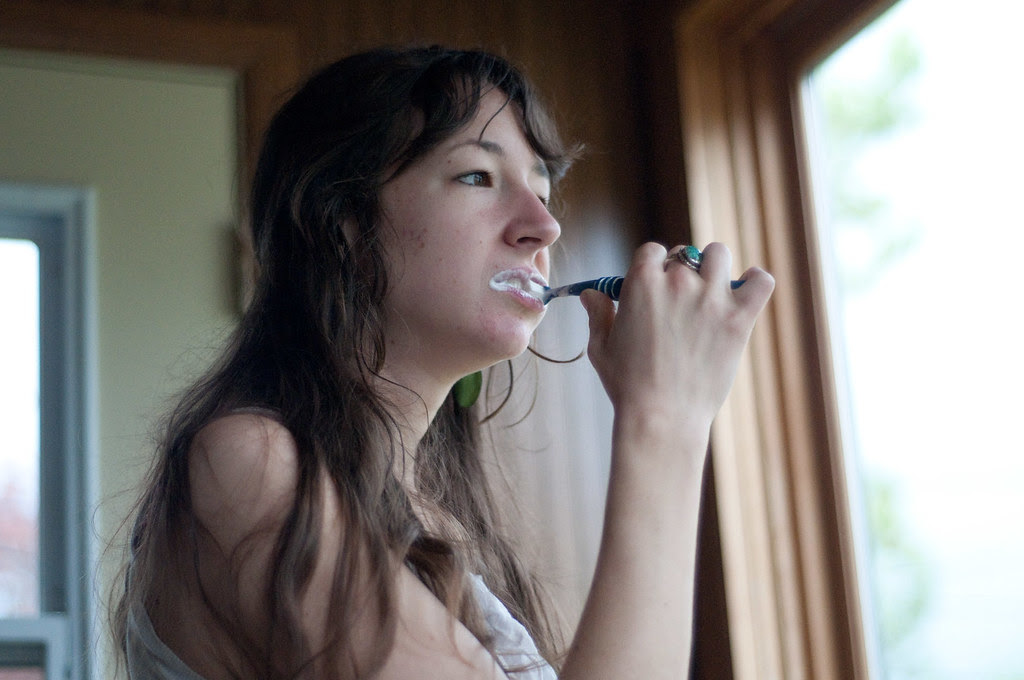 And she couldn't have been that much of a rush. She still had time brush her teeth. 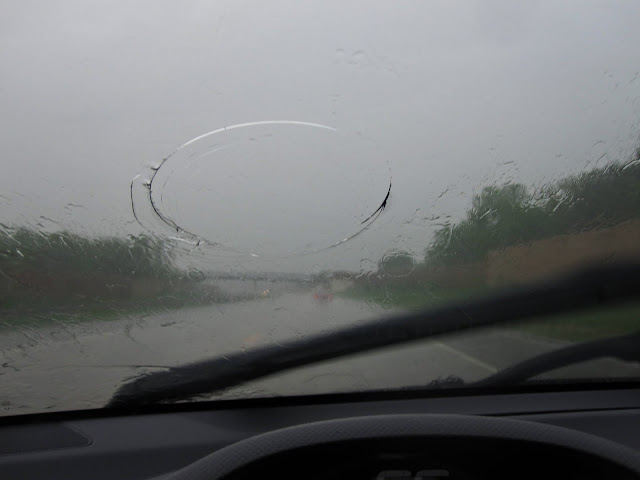 Two weeks ago I was in St. Louis Park when a storm came through with golf ball size hail. It was night time when I was able to check on my car. I didn't see any dents (found some the next day). I thought I was lucky until I got in the car and saw the perfect circle above the steering wheel. 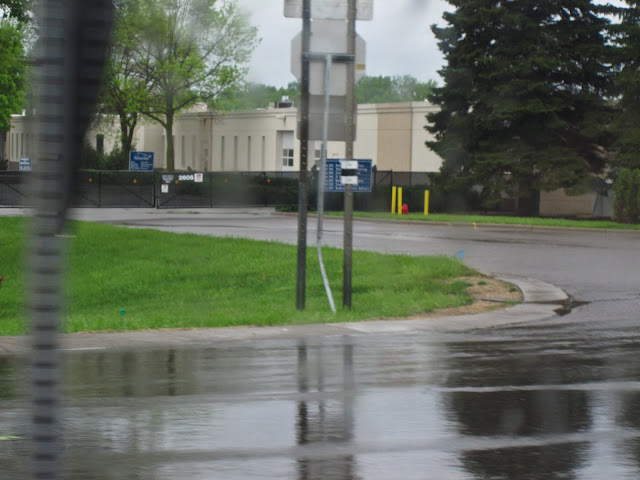 Our insurance company set us up for a car inspection. I drove 30 miles in pouring rain, got lost twice only to find out the place isn't even open on Sundays. Yeah, I was not happy. The photo above is of the closed gate.

Meanwhile I was in a tizzy changing my clothes from my black-tie uni to something that could get wet. It was only a drizzle, but I decided to put work clothes in plastic bag, stuffing my SLR under it all. 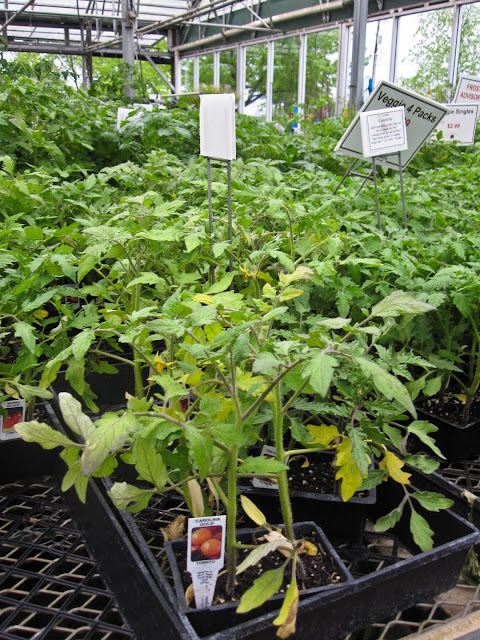 I took the scenic route home and stopped at a garden store. I was hoping to get a blueberry or kale plant. They had tons of strawberries and raspberries, but were out of blueberries. And they had no kale, but plenty of chard. My day was not going well. I made another stop at Target and bought some cute new summer pajamas. That was one good thing that happened.

At the same time Brooke was having a bad/good time in big box land, I was still on my way to Best Buy. By the time I made it to Victory and Osseo Road the steady clouds erupted. Still two miles from the store I was dripping wet with buckets of rain falling from above. When I got to the store I changed into my work clothes. That's when one of my coworkers stepped in with a smart-ass comment, "Wish you had a car today, don't you." Heck, I'd rather be wet than paying four bucks a gallon. 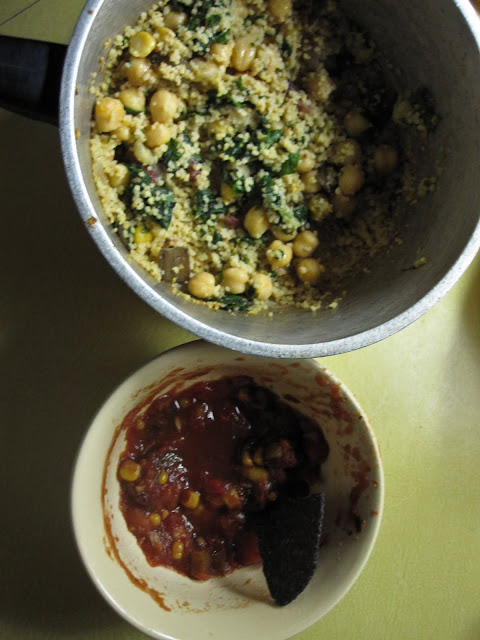 I came home and heated up my lunch. Leftover chickpeas and chard with couscous with chips and salsa. I had just sat down to eat when I heard tornado sirens going off. I quickly grabbed my computer and lunch. I tried to get Peanut in the basement with me. Usually he runs towards the basement once we open the door, but he wouldn't go down. Once we got downstairs I turned on the lights and was about to check on my computer if there was actually a tornado and where it was spotted when I heard a huge crash. It sounded like something had hit our house. Immediately after that the power went out.

Back in Geek Squad-land we had been dealing with a leaking roof all day. Round 1:30 we heard about a touchdown on 394 and 100. Deputy Hood went straight for precinct desk and told us to get to the PDR, a window-less room normally reserved for management. A few minutes later I was discussing the scientific merits of the supposed Rapture, while North was being torn apart across its heart. 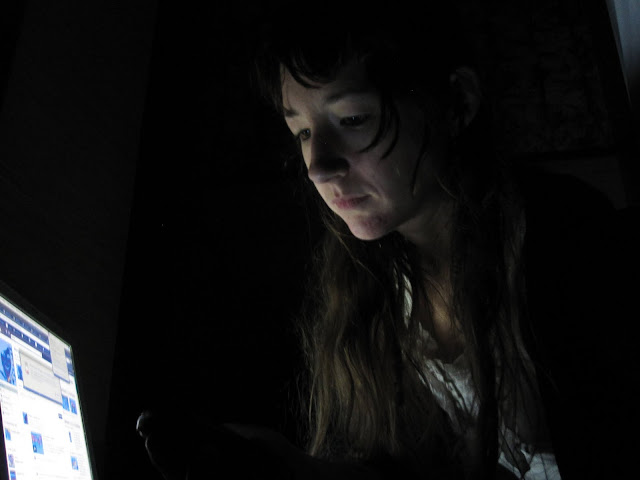 I knew this was real and hid in the basement bathroom. It became really quiet and I wasn't sure if I should go upstairs yet. I listened to the radio and heard that a tornado had cut through north Minneapolis.

Then Brooke texted me, "Oh  my god tornado i love you." My response was rather curt, "f*****get in the basement." It was one of those moments you don't know what to say. I didn't want to believe that this could happen. Our house is strong, but an old Best Buy like Brooklyn Center's could've been opened like a soup can. 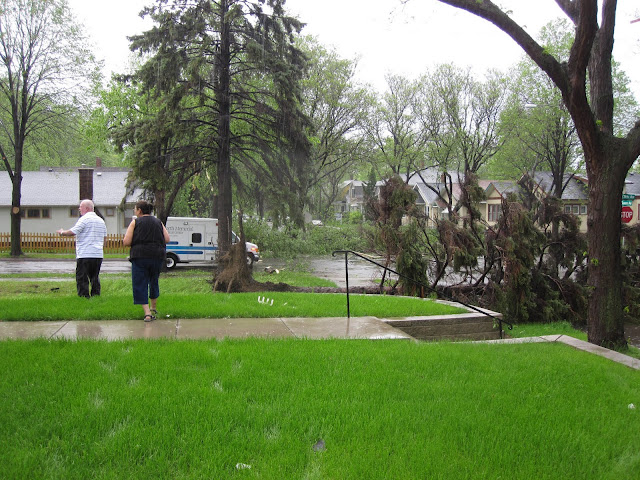 I came upstairs and looked out back and saw a few branches on the ground. When I went out front there were trees and powerlines down everywhere. Luckily there was no damage on our house. Both our gates were wide open and some of our gutters were bent out. The crash I heard was the tree two doors down. 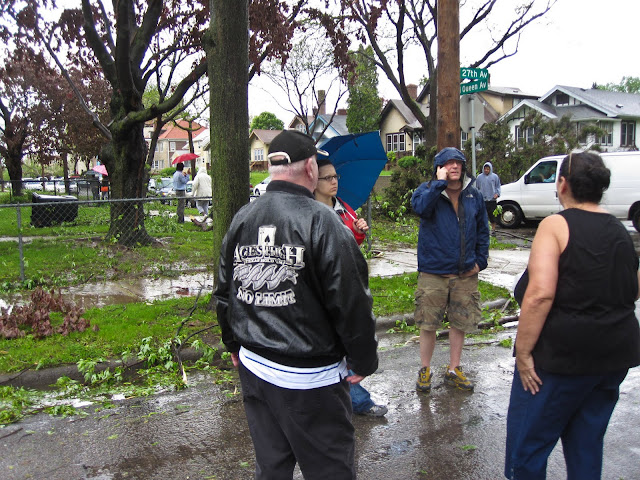 I walked around and talked to more neighbors then I had all year. 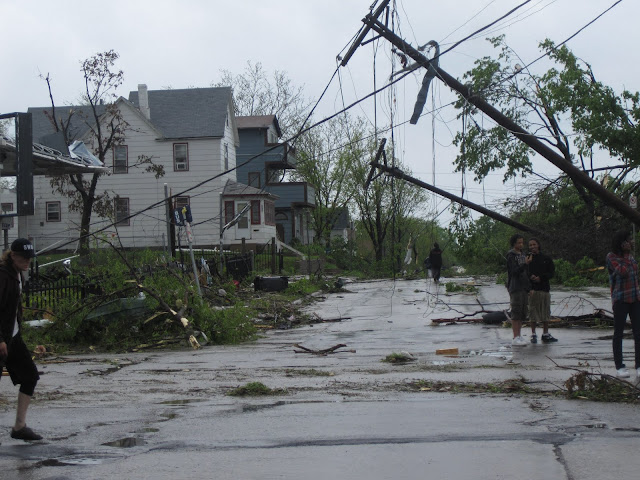 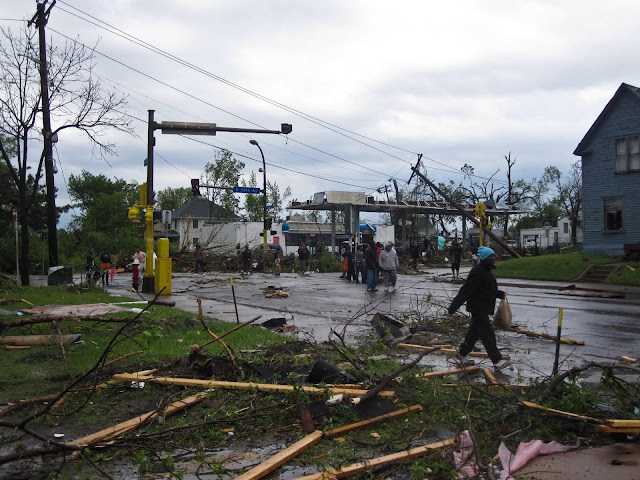 The damage was much worse a few blocks down. 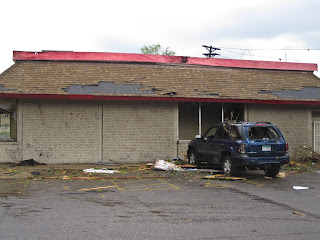 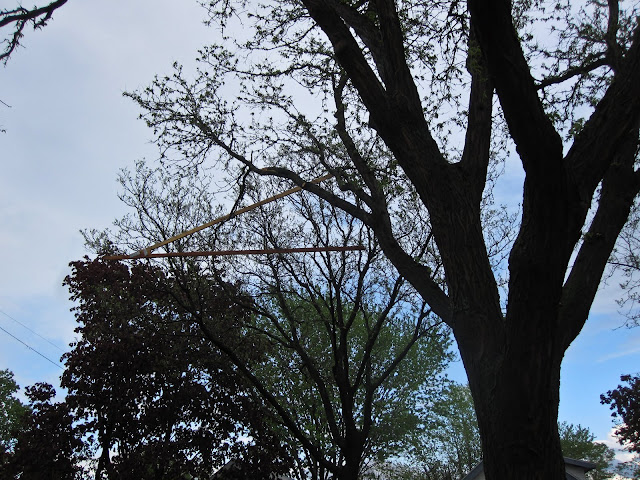 That's part of someones roof in the tree.


I didn't get off work until 4; all I'd heard were reports that the 'nado had touched down at 29th and Logan. All I could do was relax and enjoy the rest of the shift. Because of the power outage Brooke couldn't pick me up so I was forced to ride my bike home.


At Centerbrook Golf Course I stopped to take my first photo of the damage. For some reason, god only knows, a Geek Squad client asked me for directions to 19th and Humboldt. Normally, I would've cut through the Shingle Creek 'hood and road over Osseo to my home base in Jordan. Being a good Samaritan I guided the former-customer to Humboldt, Dupont and finally Lyndale and Webber Parkway.  The entire Shingle Creek rail corridor was blocked by a massive Canadian-Pacific train that had been fallen by a downed power line.


While I had started guiding Marcus (or at least that's the name I remember) another biker started following me. I felt like I was leading an expedition to the other side of North. While the bumbly bum found his way, Marcus and I decided to jump the train at Dupont. To our dismay a cop started shouting at as over the PA, "Real Smart, Real Smart guys." While he had a point, he wouldn't let it go. I responded in kind. "Well officer if this was any other part of North we'd have more than one bridge over this rail corridor." That took him for surprise. Nonetheless, I want to say thanks for caring. 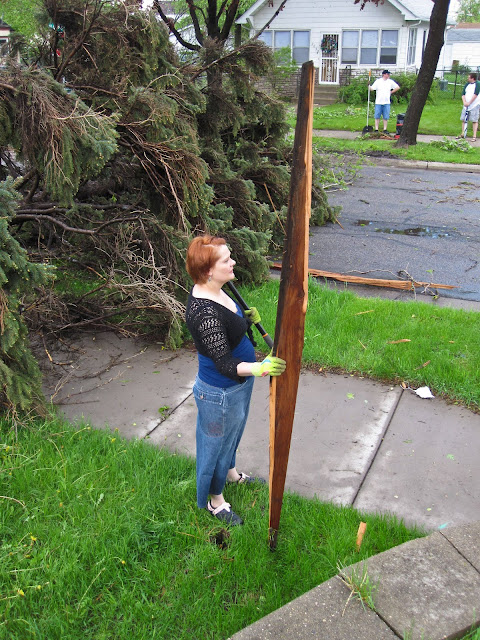 I'm not really the god fearing type or even a Thank God-kind of guy. Nonetheless, I found myself on some kind divine path. I literally had to head back to my house on 27th and Queen through the scar that had split North in half on a 45 degree angle. The destruction was heart-wrenching, yet the neighborhood had come alive from a deep sleep. The real North Minneapolis: Black, White, Asian, Hispanic--everyone was out on the streets assessing the damage, talking to neighbors they'd never met and starring off in awe. It was strangely beautiful and devastating.


It took me nearly two hours get to Lowry and Logan from the old Brookdale Mall; took me another half-hour to make it the final mile to my home. I ran into a preaching man, shouting over the Metro Transit workers that were directing traffic. I talked to him about why he was there (recovering drug dealer), if this was the best way to get the word out and then let him be, knowing that every person deserves to speak their mind. Ironically, a ways back someone asked if I was Mormon. With the bike, black pants and short sleave shirt I must've looked strange. But no, I had to tell him, I just work for Geek Squad. 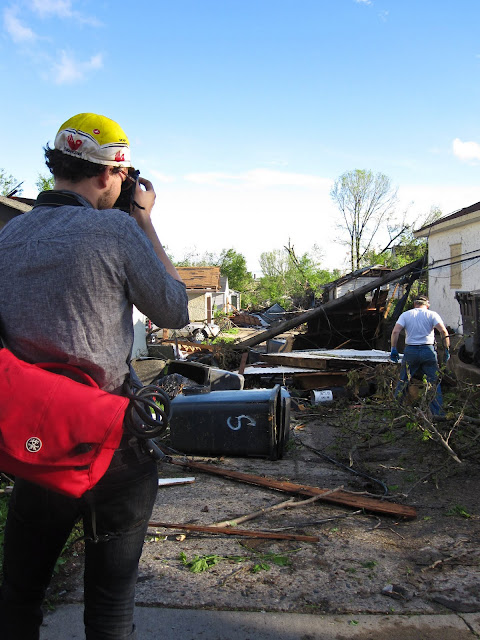 When Scott got home from work we walked around some more and saw homes that weren't as lucky as us. A house we looked at buying and Scott really wanted, but I didn't, ended up getting their roof torn off.


After arriving home to Brooke and the cat we headed back out (without the cat) and I got my first glimpse of the destruction around Broadway and Penn. The windows were already being boarded at the Broadway Liquor Outlet and workers were getting the food out of the shattered Fire and Ice. For the first time we saw inside of the Scotch Wash, who's boarded windows had always blocked the view.


Despite the looting of BLO, the atmosphere was amazing: people were/are helping one another and we're finally getting the attention we truly need. It was too bad that some of the media didn't see this. While I'm still on my soap box, I want to get this off my back. When I went to journalism school, like many of you at the Strib and Fox 9, I was taught to report in the grayscale. We shouldn't be looking for black and white answers. We should look to the grays for the truth. Facts should always guide us as journalists. I'm grateful that you're reporting reflected the single incident the next day, but these looting rumors should have never been reported. 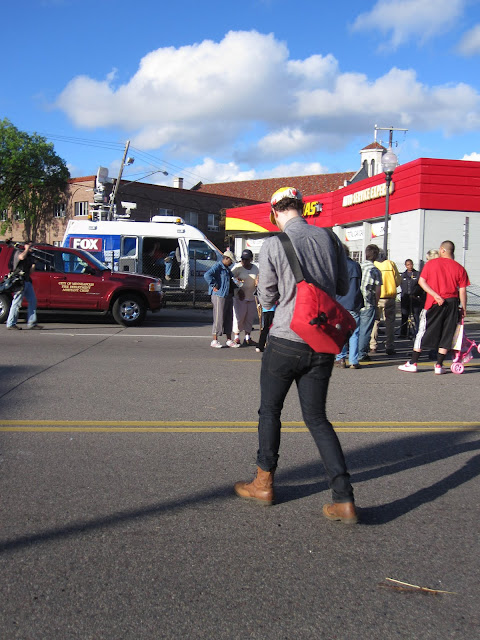 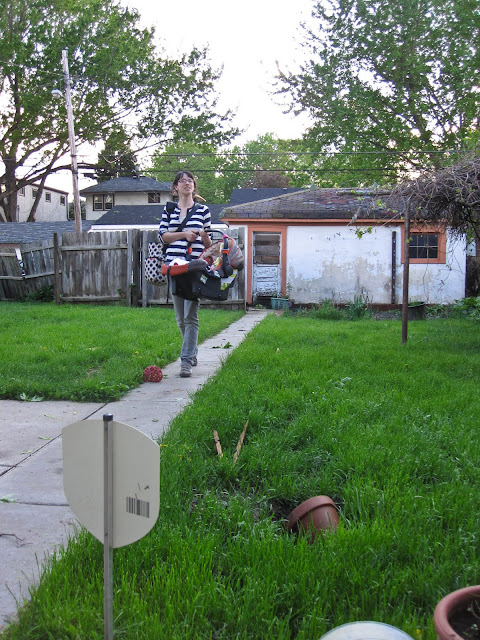 Tyler, Emma, and Olive were in Iowa for the weekend and missed the whole thing. They were lucky too and had no damage. 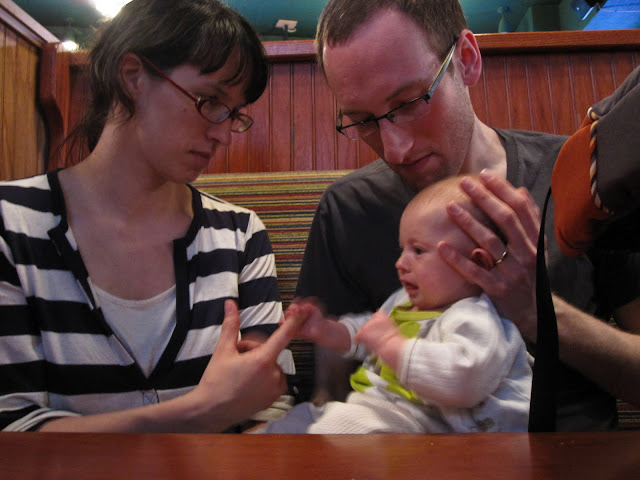 With the power out and some homes without natural gas, because of the leaks, we had dinner at Broadway Pizza in Robbinsdal.

It was good to get away from the city for a bit. Strangely when we were sitting down to dinner a funnel cloud looked to be forming over the city. Luckily this was a false start. We finished our delicious Minnnesota-square cut pizzas and called it a night--almost.


Tyler needed to return their rental to Edina so I followed him down 100. While the ride down was simple, when we got back we had to go through our first police barricade. They asked for an address and ID and they wished us luck. Instead of the normal five minute ride up Penn it took 20 minutes because many of the streets were blocked off. After dropping Tyler off I finally made it to bed and tried to sleep with the sound of helicopters overhead. 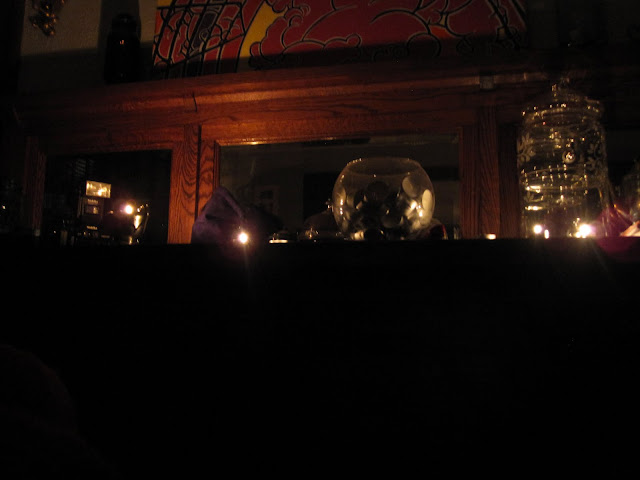 We are still without power. We hear it might be back tonight, while others say it could be a week.

At this point I'm just happy to be here. The power can wait.
Labels: North Minneapolis Tornado Twister Minnesota Sunday

Blake said…
That's intense. That was the best post yet. When you were talking about the "Nomi Nado," I thought it was some kind of festival or something, but now it makes sense. Its very strange to see those familiar buildings in such despair.
10:14 PM, May 24, 2011

Katrina said…
I'm glad you guys are ok. I almost felt like I was there through the images. It's interesting how the things that bring people together are so destructive.
3:08 PM, May 28, 2011