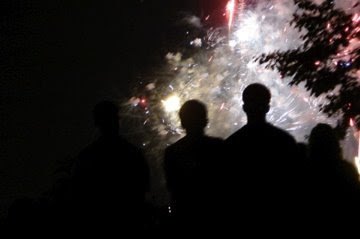 Last night was the last day of the Aquatennial, here in Minneapolis. It ends every year with big firework show, better than the one they have during the 4th of July.
Cevonne had not seen fireworks in a long time so Scott and I forced her along. She had also never been downtown at night.

The Aquatennial was at its prime in the 40's and 50's with over 200 events. Now there's only 70. They used to have swimming shows with diver acts. The pool doesn't exist anymore, which is too bad. 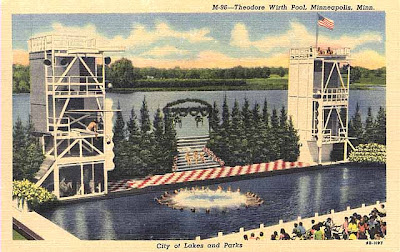 Rock Paper Stitch said…
they need to bring that back. synchronized swimming would be awesome to watch.
5:00 PM, August 06, 2008

By Scottie and Brooke Tuska July 10, 2021
We began our 4th of July weekend a little early with a trip to Marshfield, WI. I had to shoot a cable company store and I didn't feel like going back and forth from Wisconsin to Minnesota and then back again. Meadow found something shiny at the bottom of the hotel pool and I went diving for it.  We got to the cottage for the long 4th weekend and I enjoyed some ramen. Because, you know. Chelsea and the kids were already up when we arrived. Theo would play in his turtle all weekend long. Hey Harvey. The cousins were reunited after almost a year. Theo didn't remember who they were. Theo may have not remembered who they were, but he still wanted to hang with the dudes. You can expect something yummy every night when the whole gang shows up. Chelsea served us her famous chicken and wild rice soup on our first night. Then we went on our fist pontoon ride of the week. Gail must bring wine on the boat ride. Oh and animal crackers of course. Not for Gail, but will end up all over the po
Post a Comment
Read more