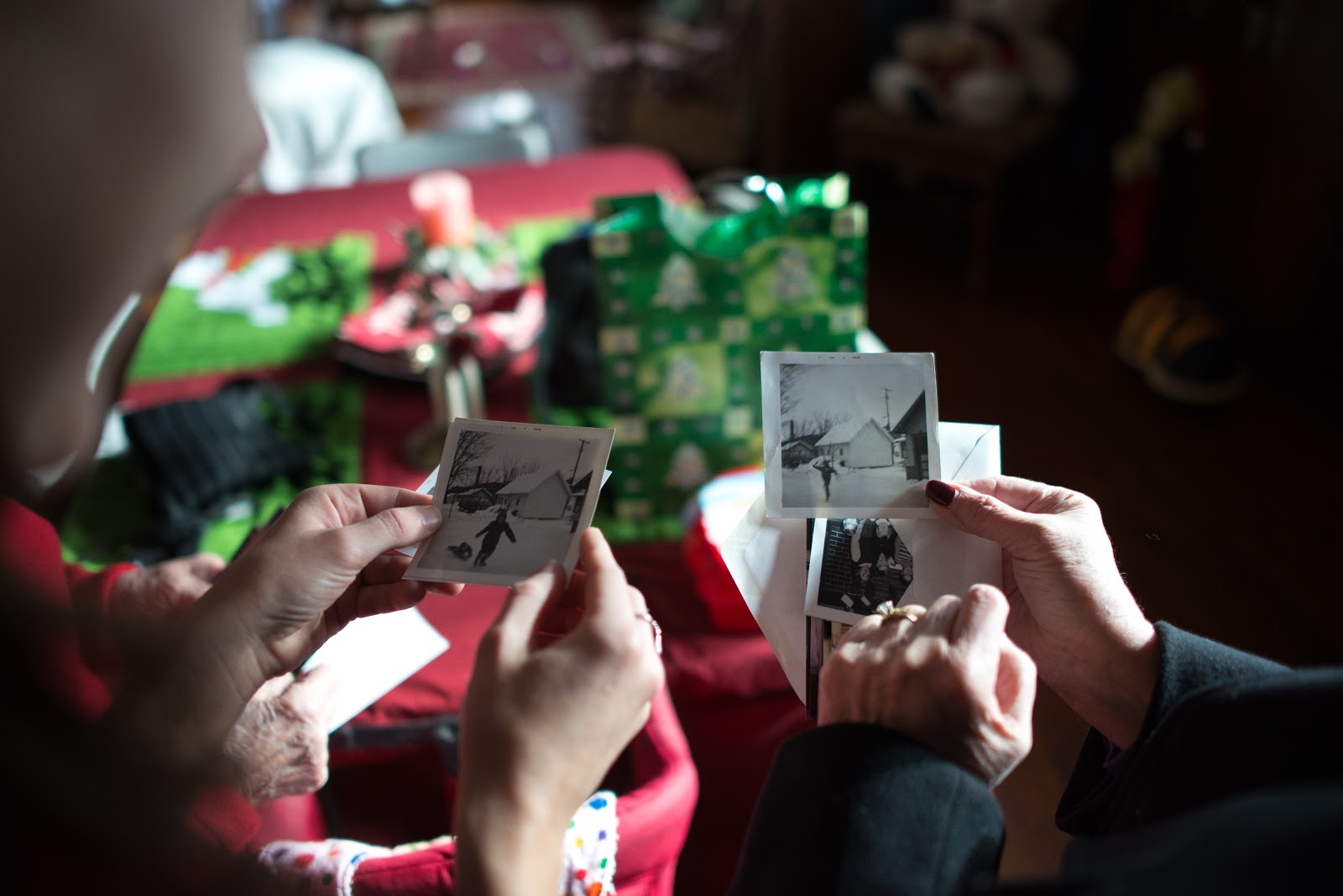 Ever since we moved in we talked about having the previous owners over. We wanted to wait until we had refinished the floors before having them. Since we never did that I finally decided to suck it up and call them.

It wasn't going to happen this winter.

The husband passed away this spring, but his wife was excited I called. I told her she could bring her kids if she wanted. That way we could hear stories about being a kid and a parent in the house. After calling back and forth figuring out a time we finally decided on a week before Christmas. Two daughters out of eight children came along.

I always wondered how they had so many kids in the house. I guess they fit as many kids as they could into each room. They also had a dining table that fit 10 people. One of the kids said they would go down the stairs backwards because it was so deep. 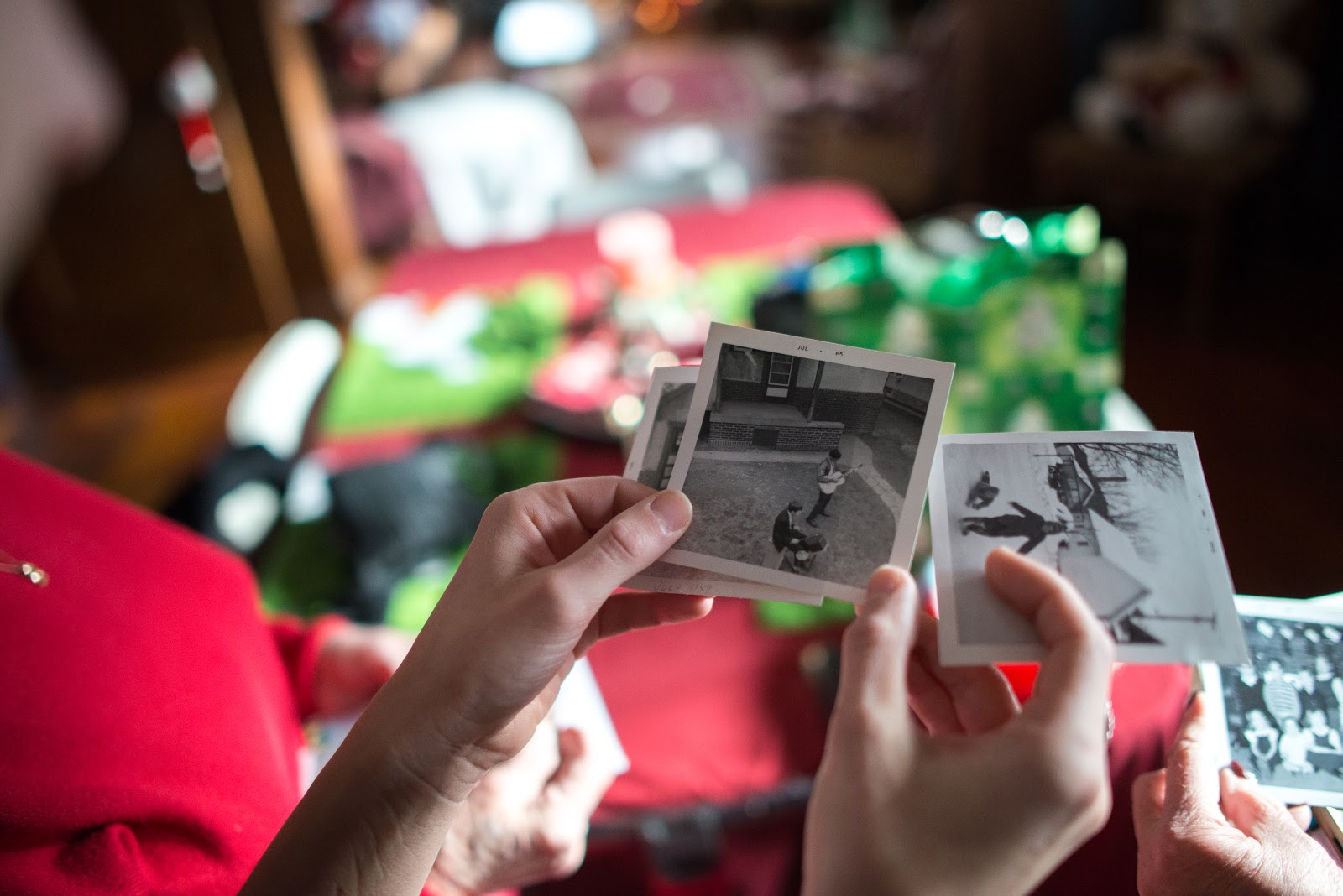 We had asked them to bring photos from when they lived in the house. I should note that they had owned the home from 1952-2006. It was so neat seeing old photos. Our home looked exactly the same with different decorations.

The only big change was the back porch. I always wondered what it looked like. I like our enclosed porch, but it would've been nice to have a small, open back porch.

They used to flood the backyard to make an ice rink in the winter. They also had swings and a giant chalkboard in the basement.

We also learned how the kitchen looked when they bought it. The sink was where our oven is, the oven was where our fridge is and the fridge was where we hang our coats.

They also said to look out for lost baseball cards and a paint set. 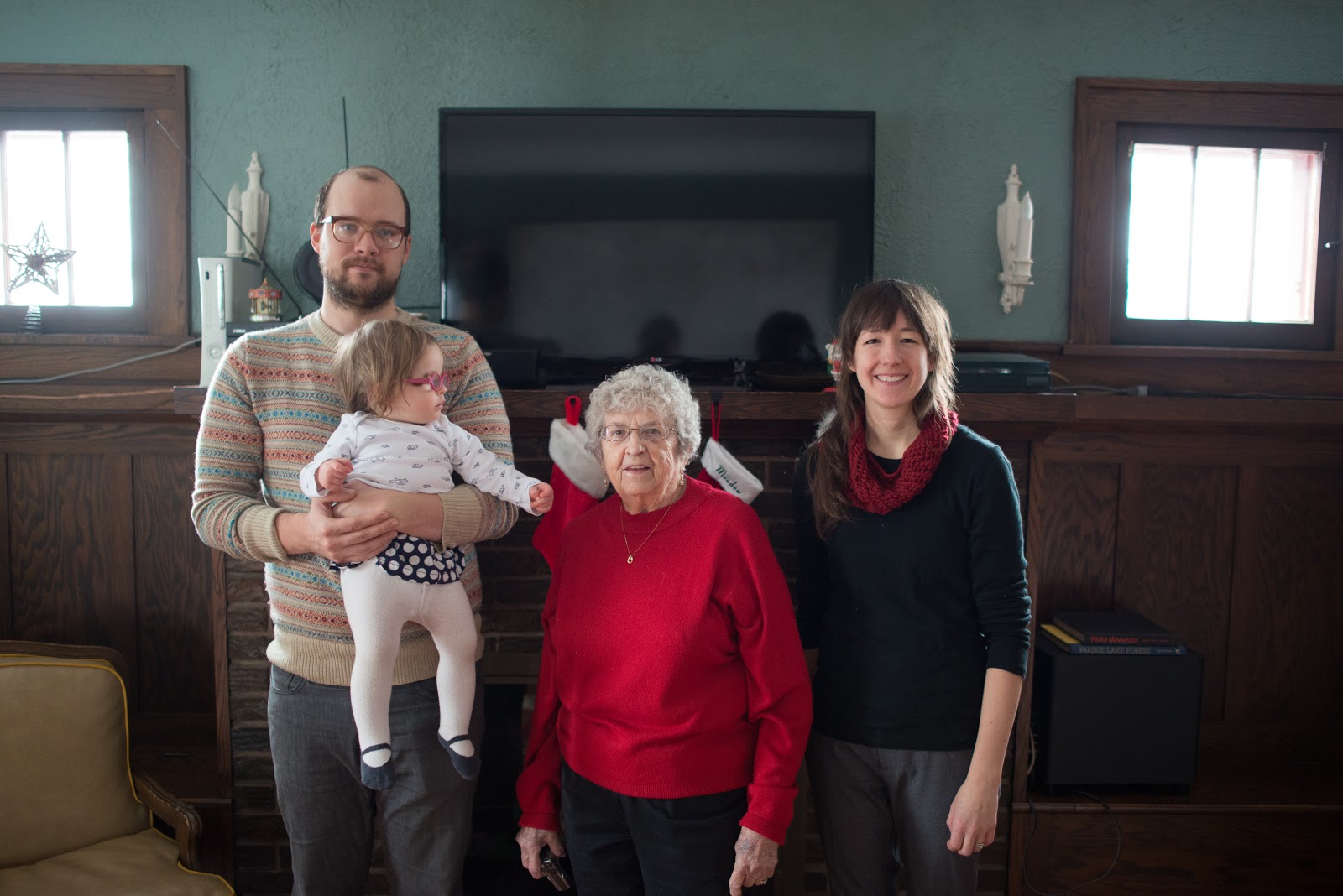 We got our picture taken with her. 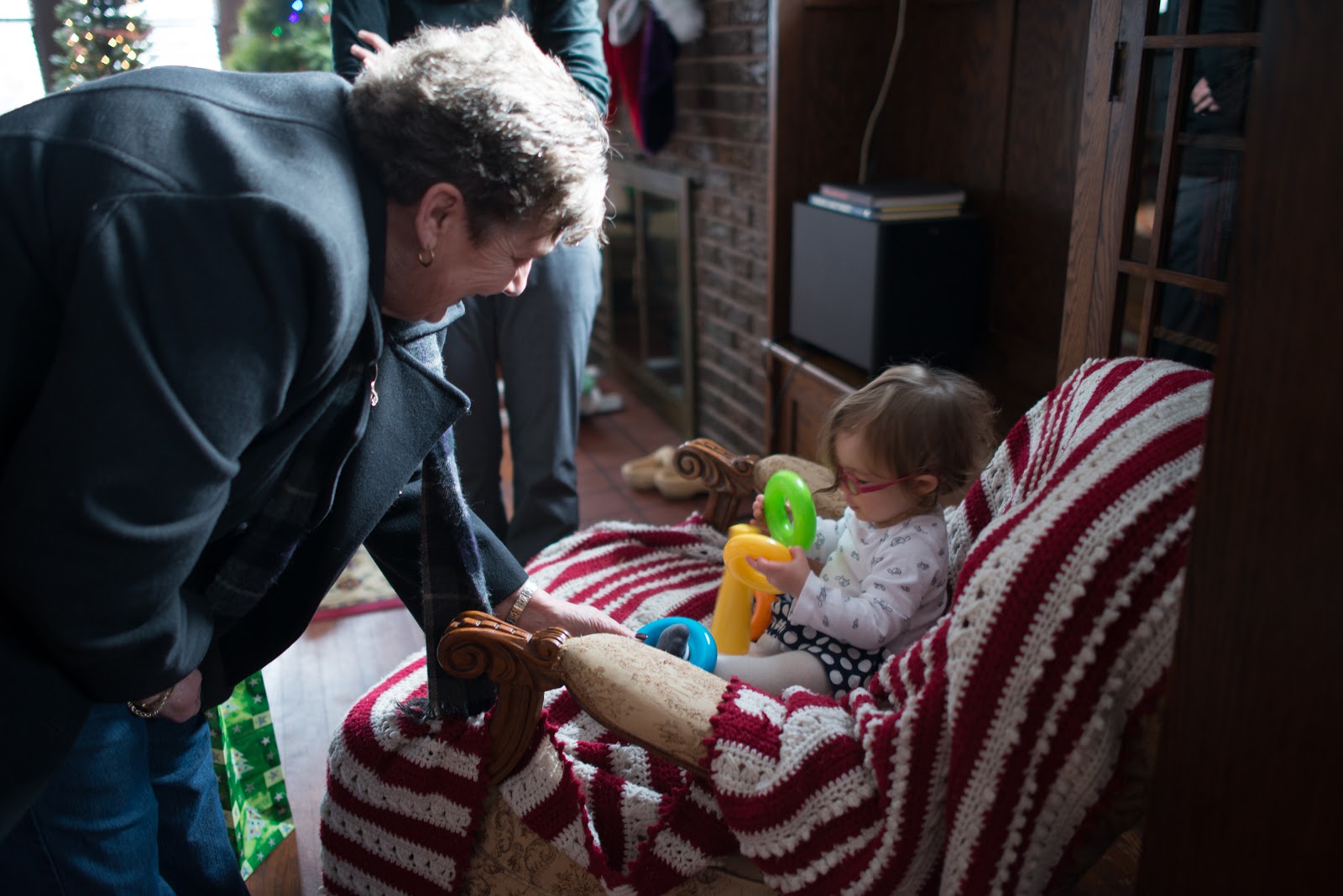 They were so sweet and brought us a poinsettia, homemade cookies and a gift for Meadow. We told them that the other family members were welcome to stop by as well. 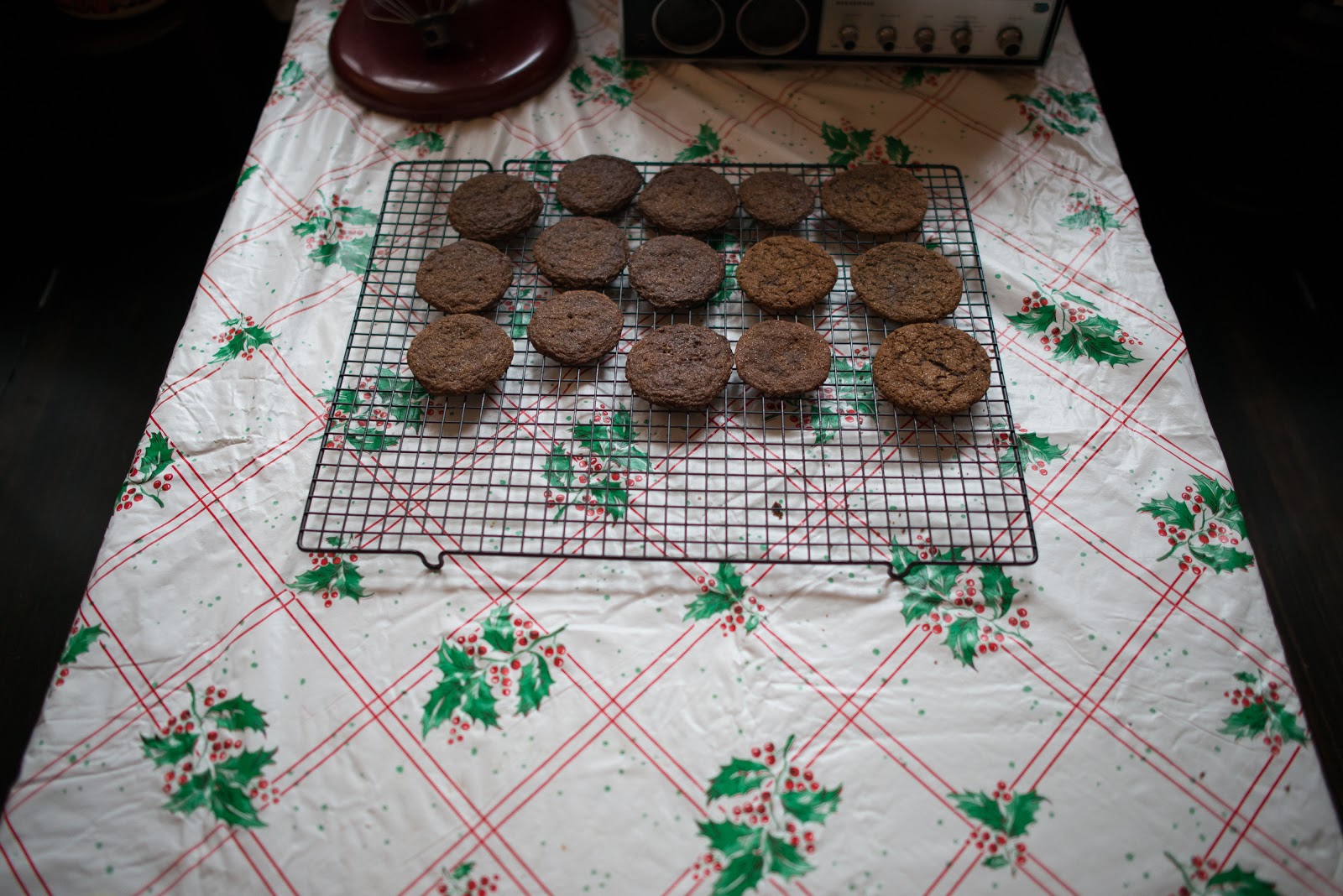 After they left I baked some molasses cookies I'd prepped the night before. 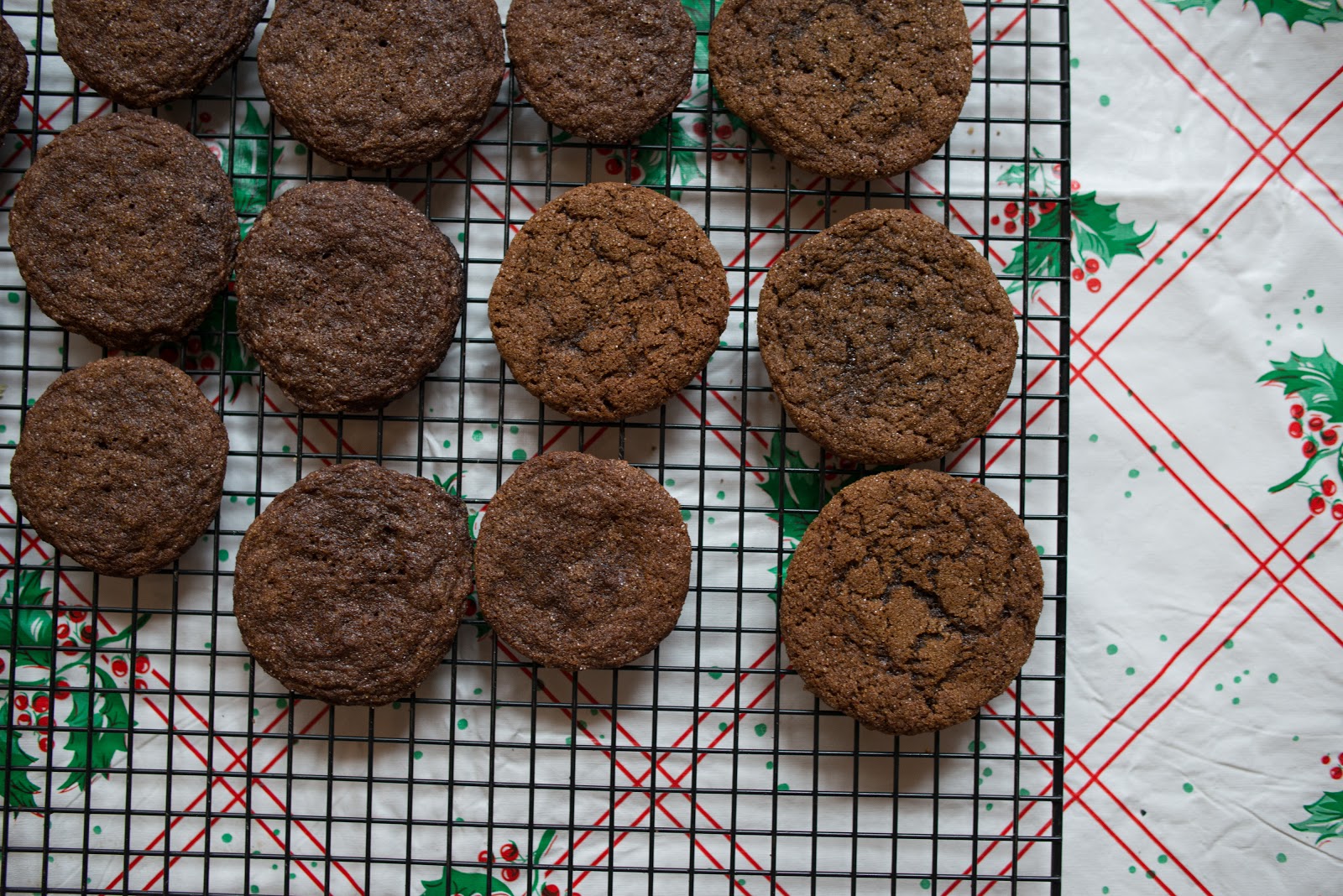 Gingerbread cookies may be fun, but these are way better. 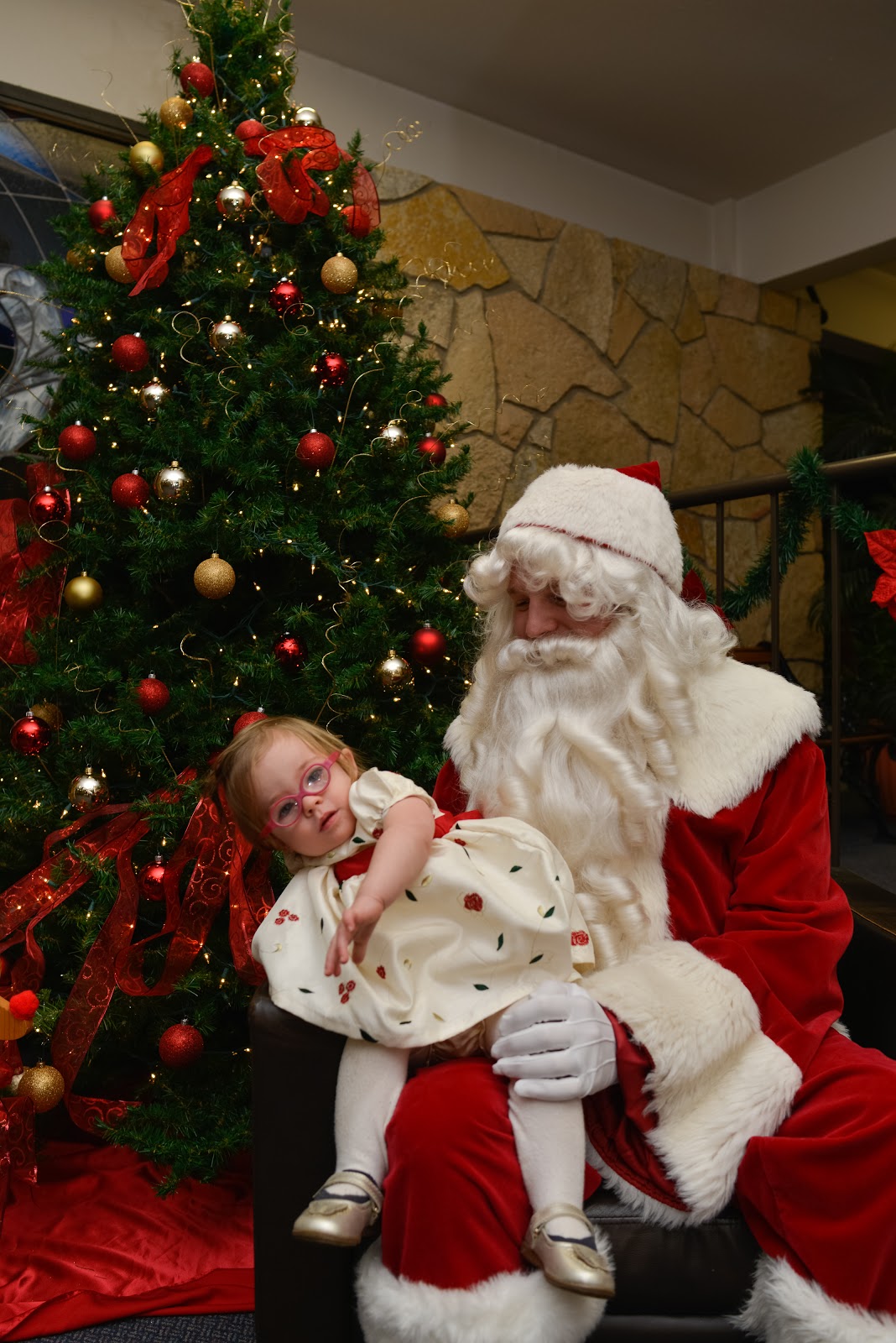 Later we attended the annual neighborhood Christmas party. At the last second I was given Santa picture duty.

Meadow loves sitting on Santa's lap. At least she wasn't crying, just tried to get away. 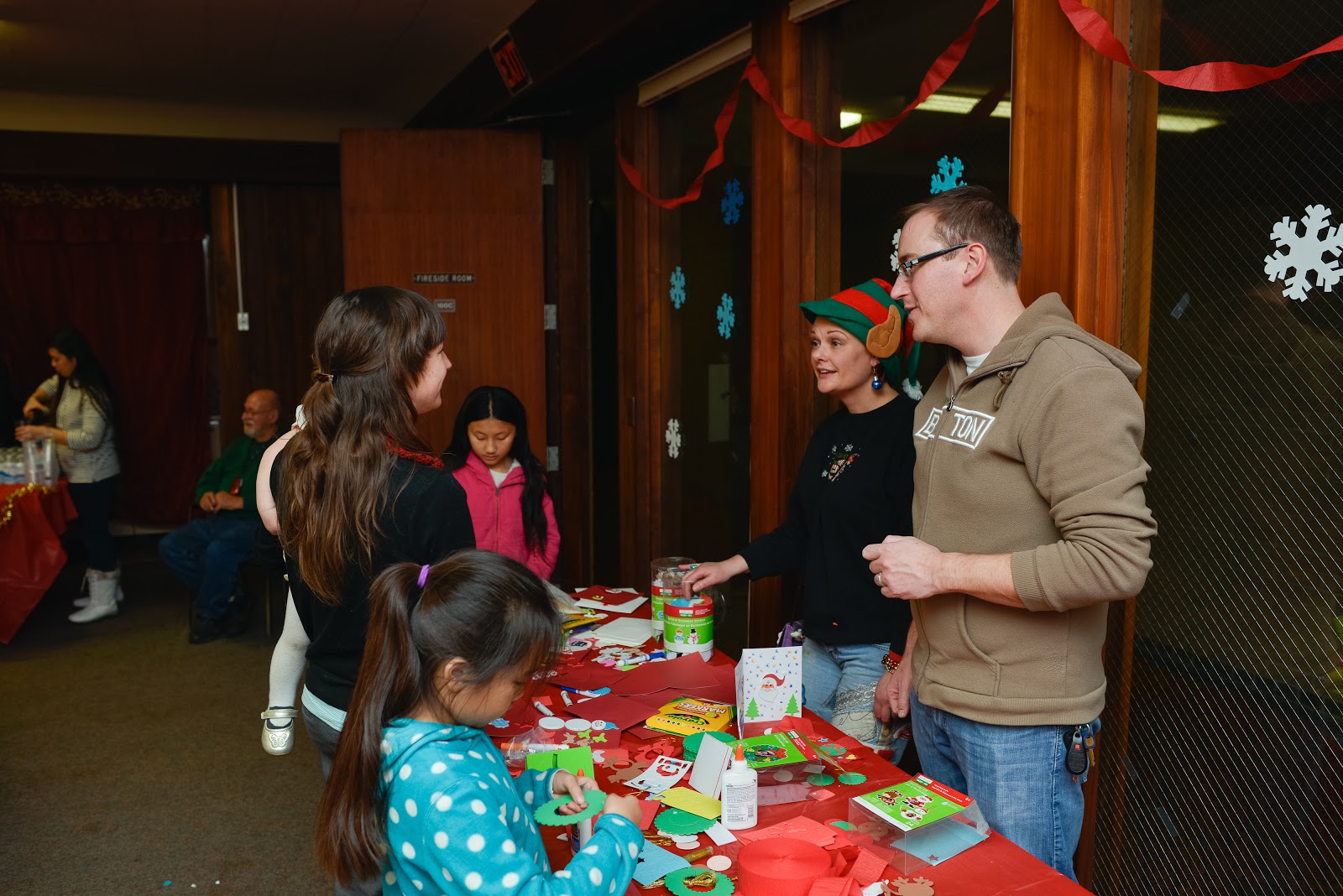 I talked with our neighbors while Meadow worked on a craft. 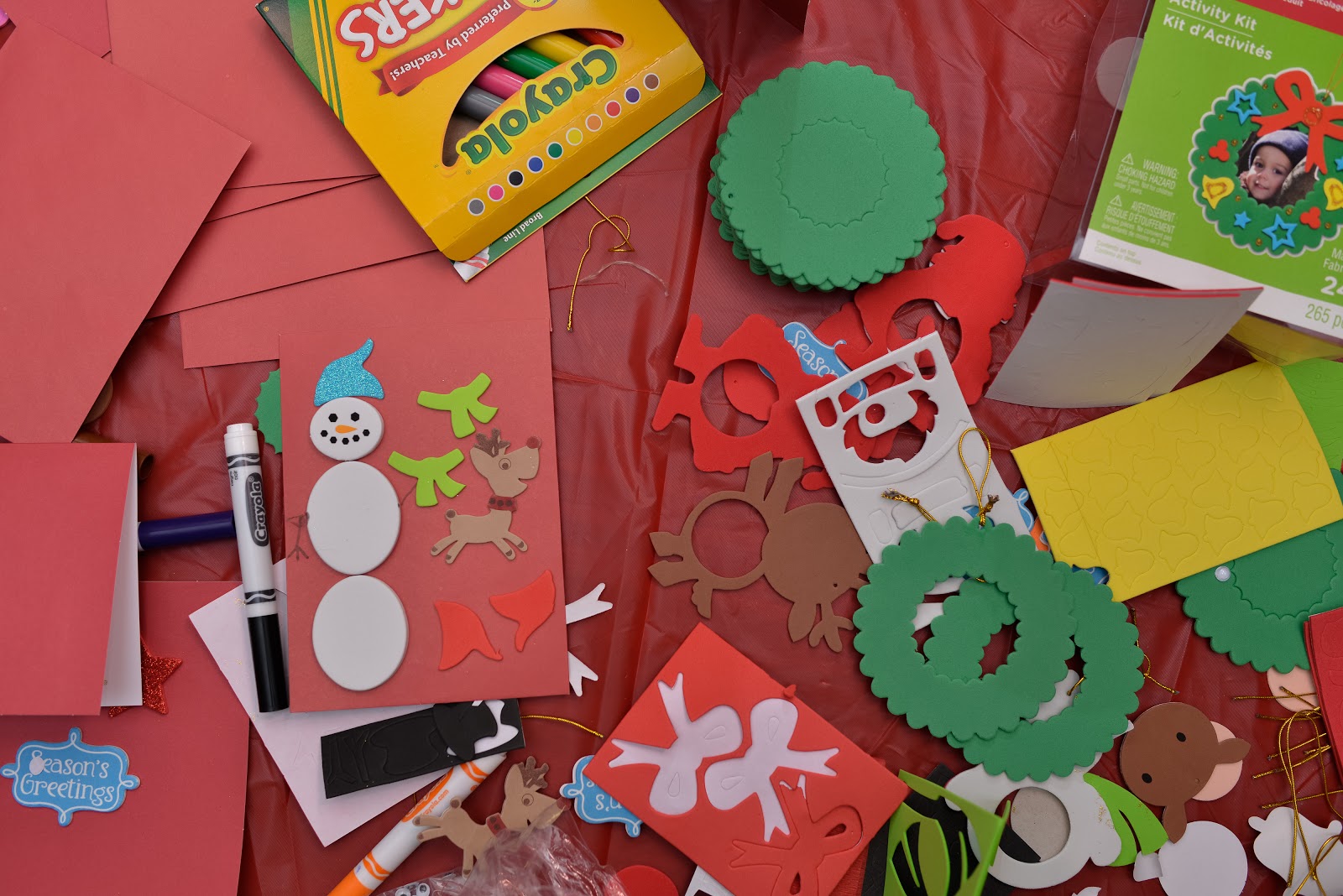 Meadow made a really nice card. 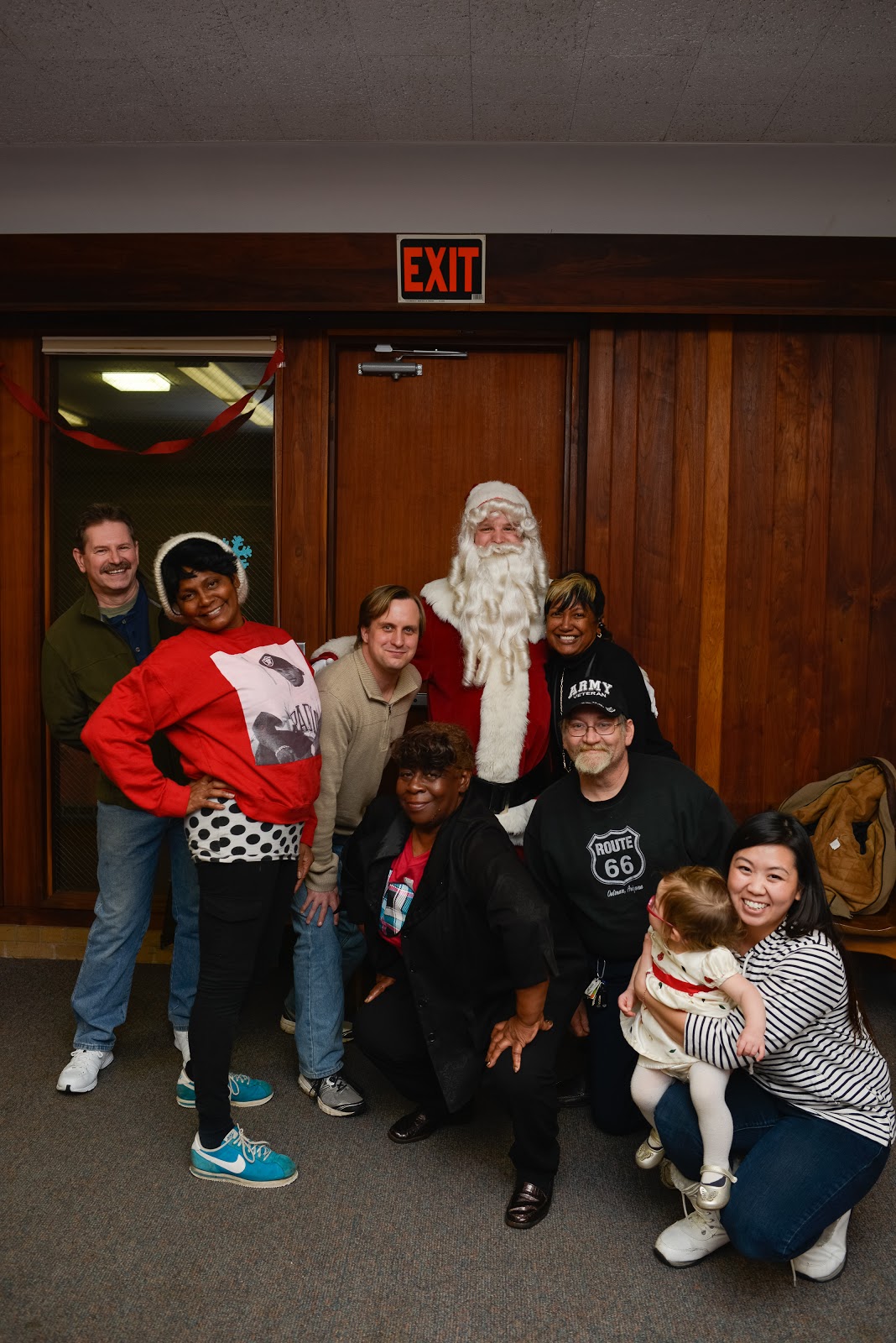 Everyone wanted a picture with Santa. 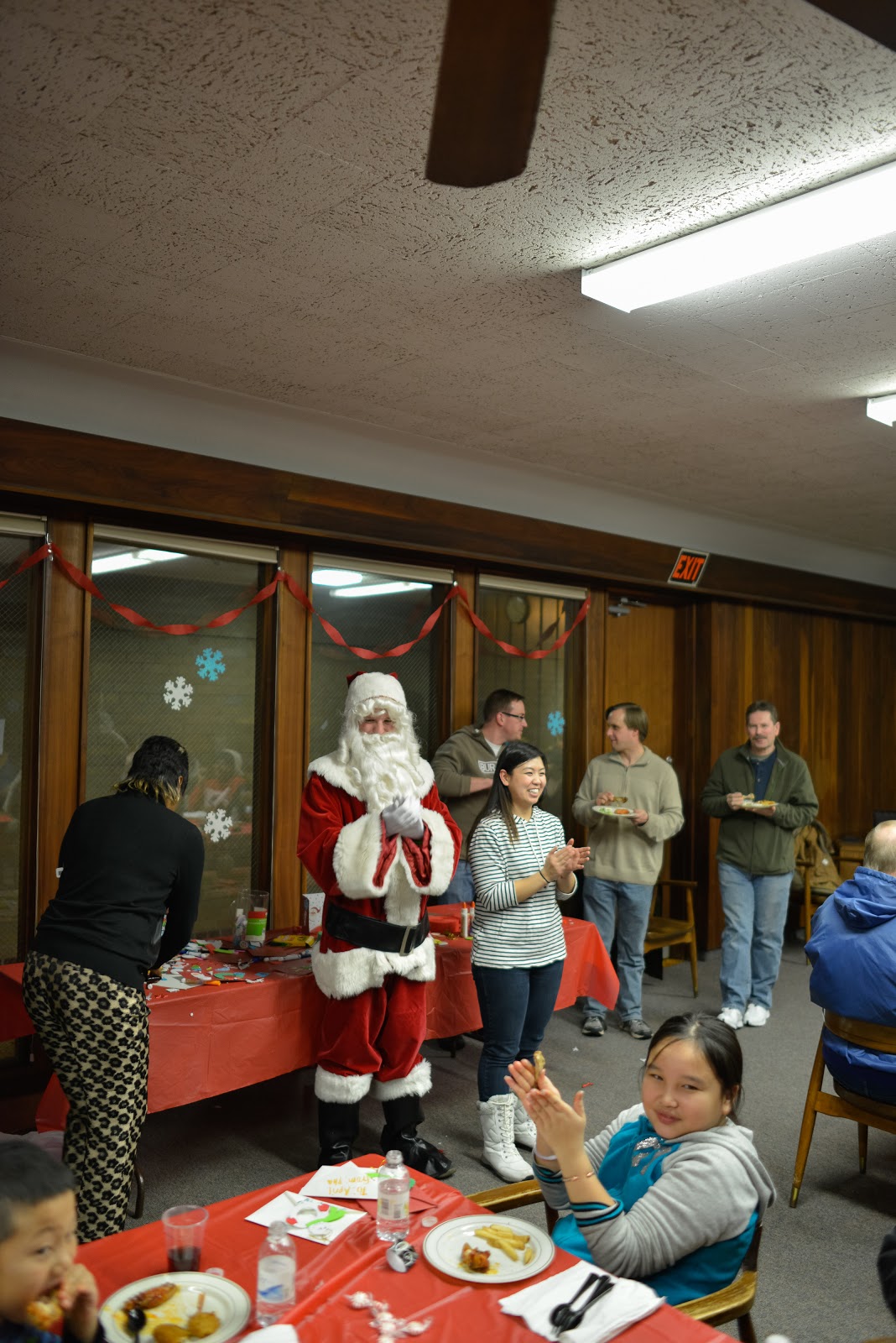 Not a bad a way to spend a December evening. 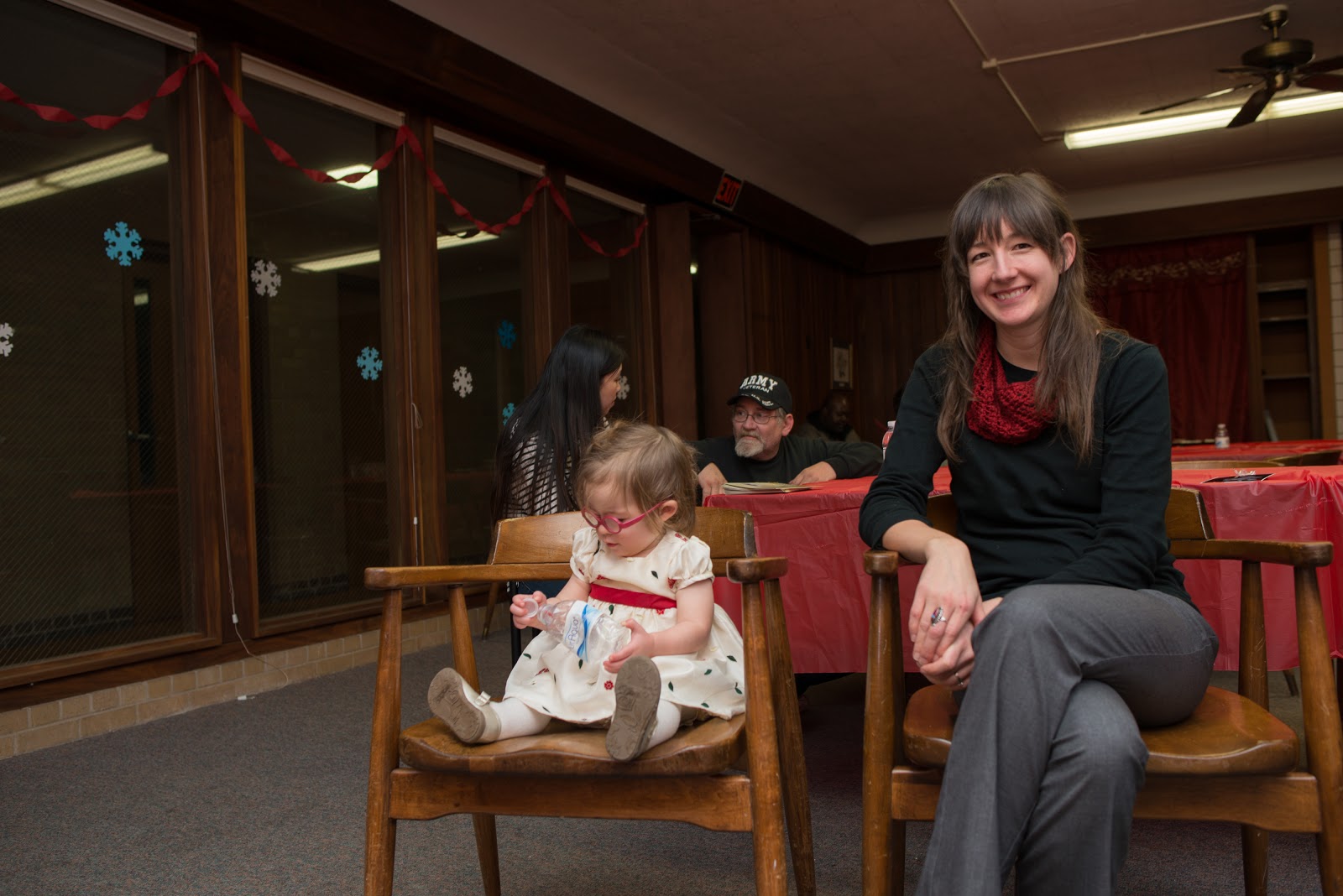 I think we all had fun.

Amanda said…
I think it is so sweet that you guys invited the previous owners. What a neat experience! I'll bet they loved it.
8:06 PM, January 01, 2015