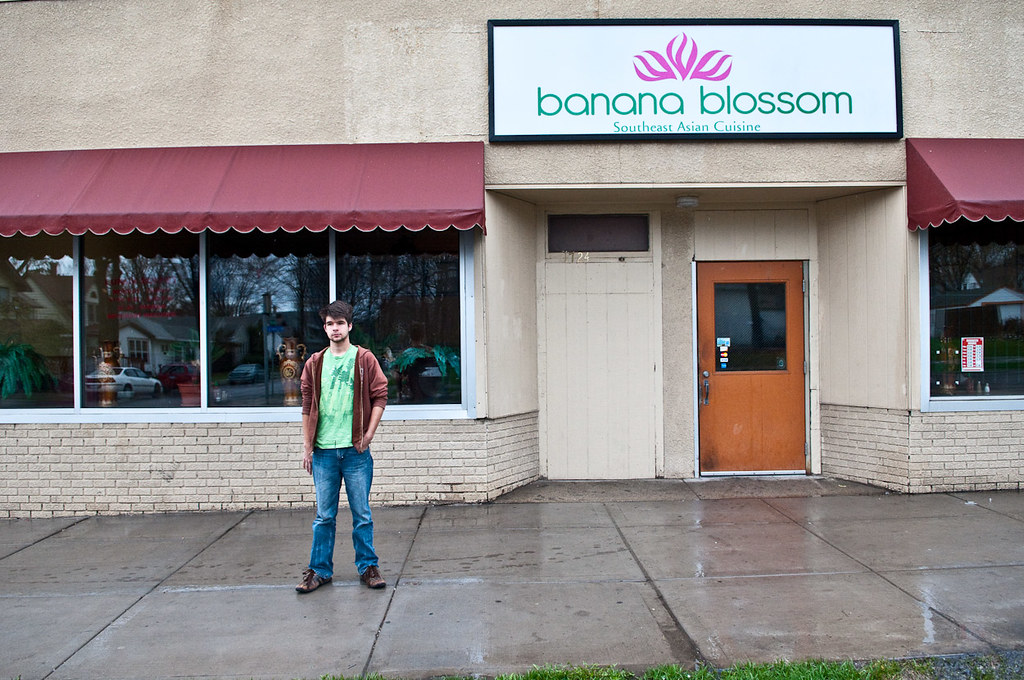 Blake came to visit again. I love having a house, we get more visitors. 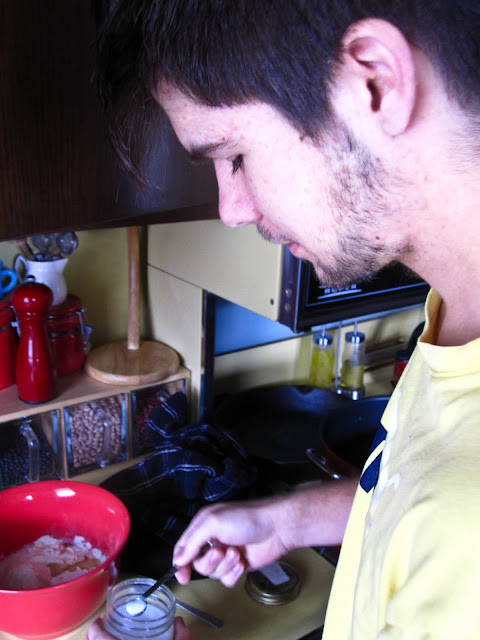 Scott left to go to church and my favorite brother made me breakfast. 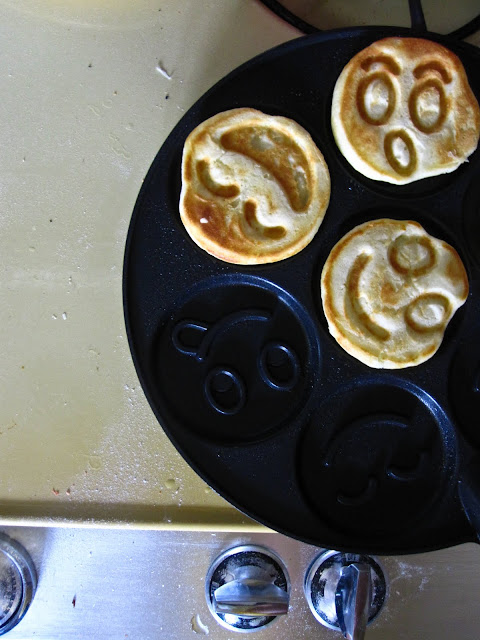 Mini pancakes. You can get this pan from Nordic Ware. Made right here in Minnesota.

She fails to mention that she's worked there for, like ever, and it's the greatest place to spend a lazy Saturday.

As Brooke mentioned I went to church. Actually I went to church for the second week in a row. I'm working on a documentary project exploring faith through photography and audio. Watch for more about "52 Weeks in Purgatory," down the road. One of my photos was the photo of the day on Northside 365. 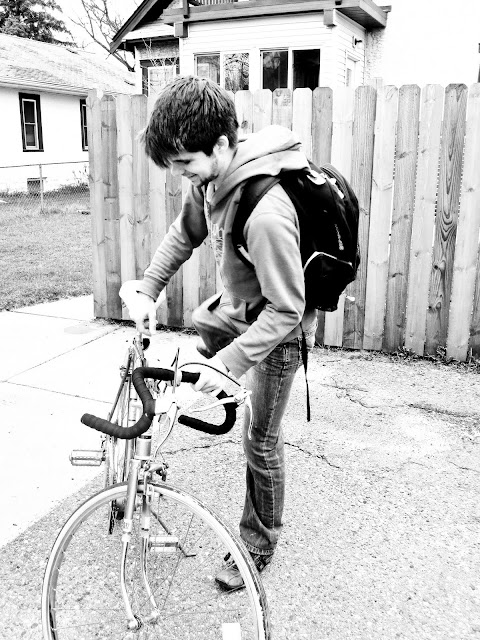 It was cold, like I saw a few flurries cold, but we still biked to south Minneapolis anyway. 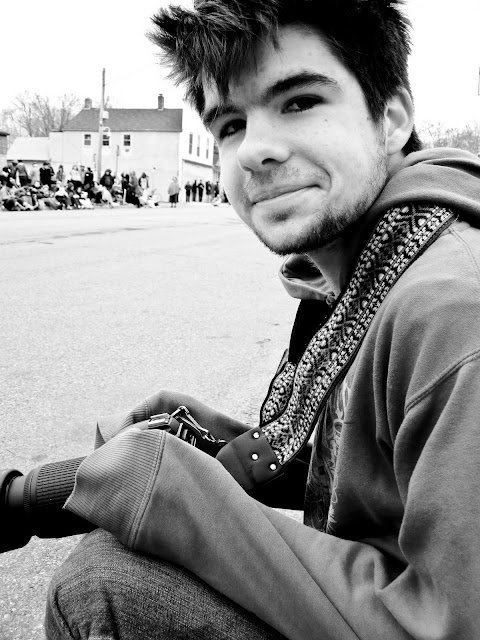 Blake has been wanting to come up for Mayday for years. Last year he couldn't come because of our sister's wedding in Albuquerque. 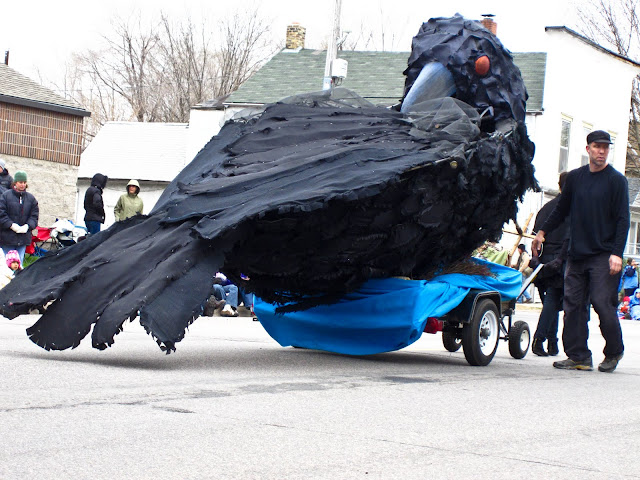 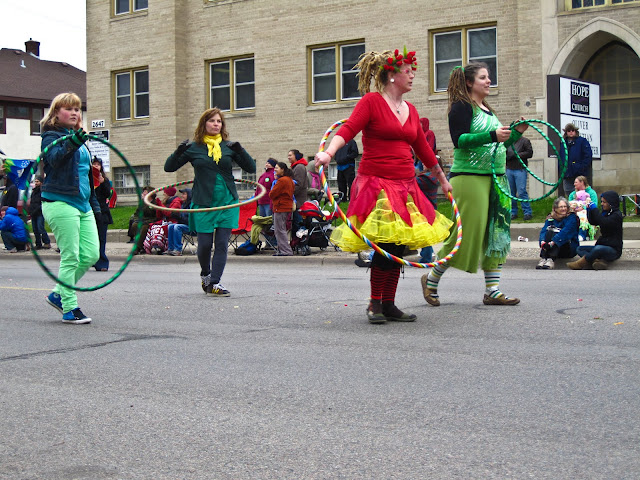 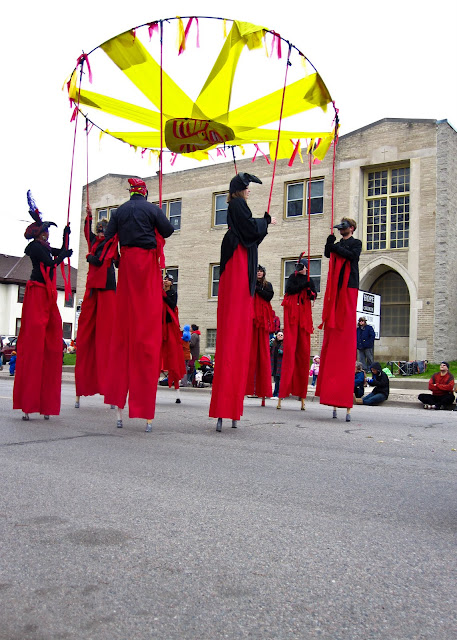 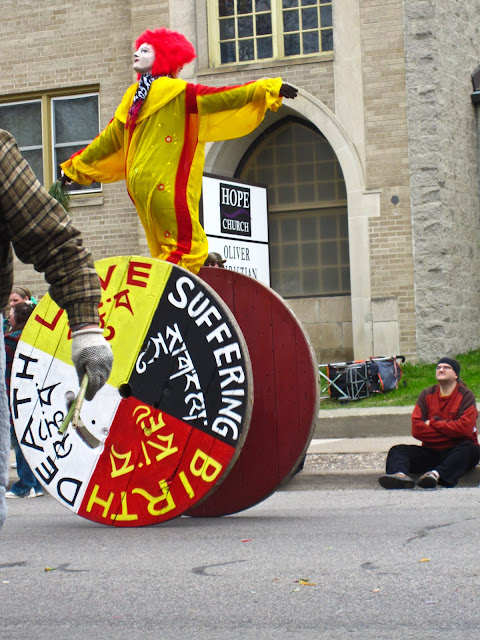 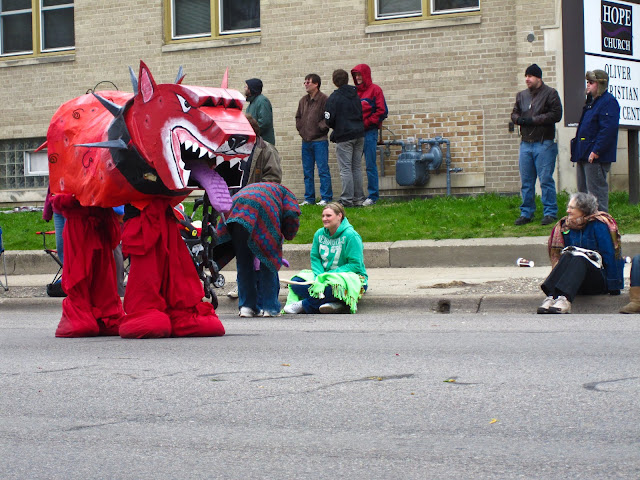 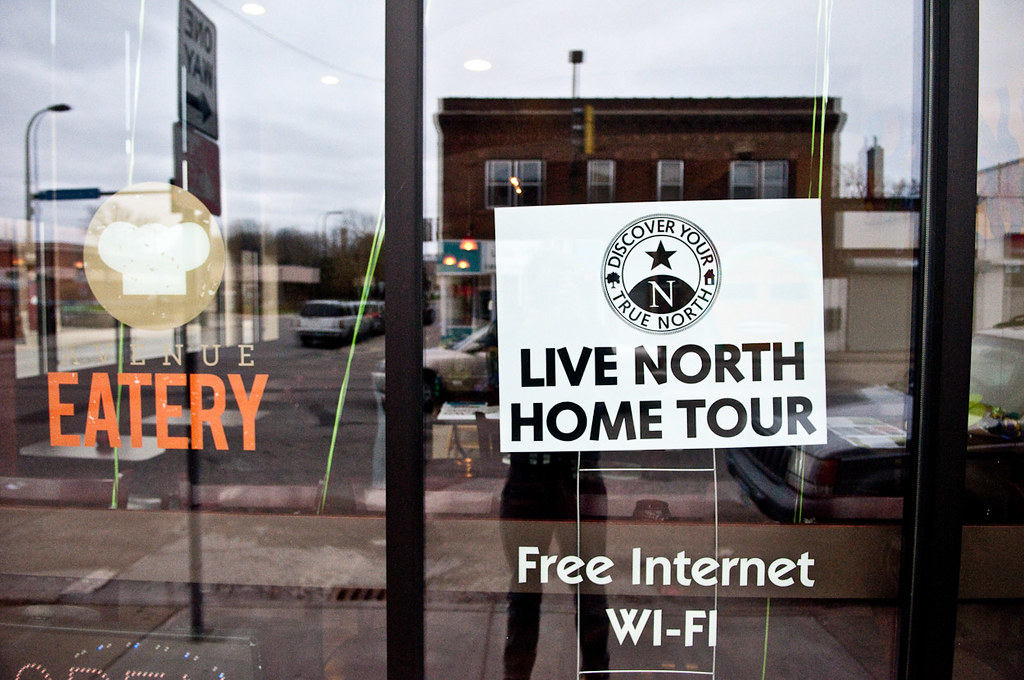 After church I headed to the Live North Tour. I had a great time photographing the Nomi Home Tour. So, I couldn't miss another chance to get into beautiful Northside homes. 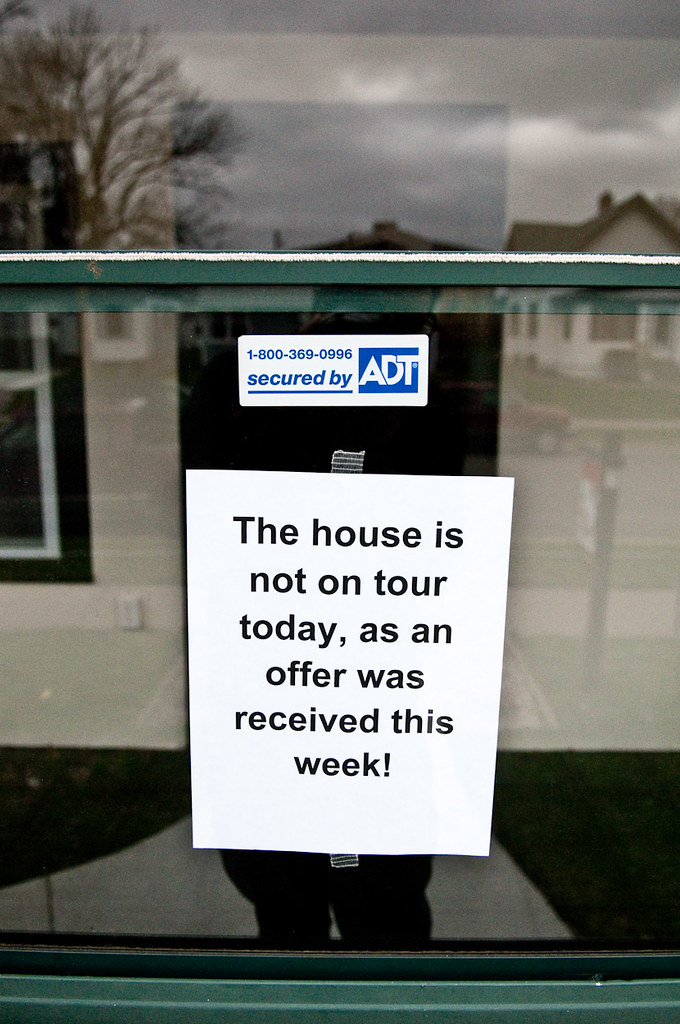 The first two I went to weren't showing. One had already been sold! 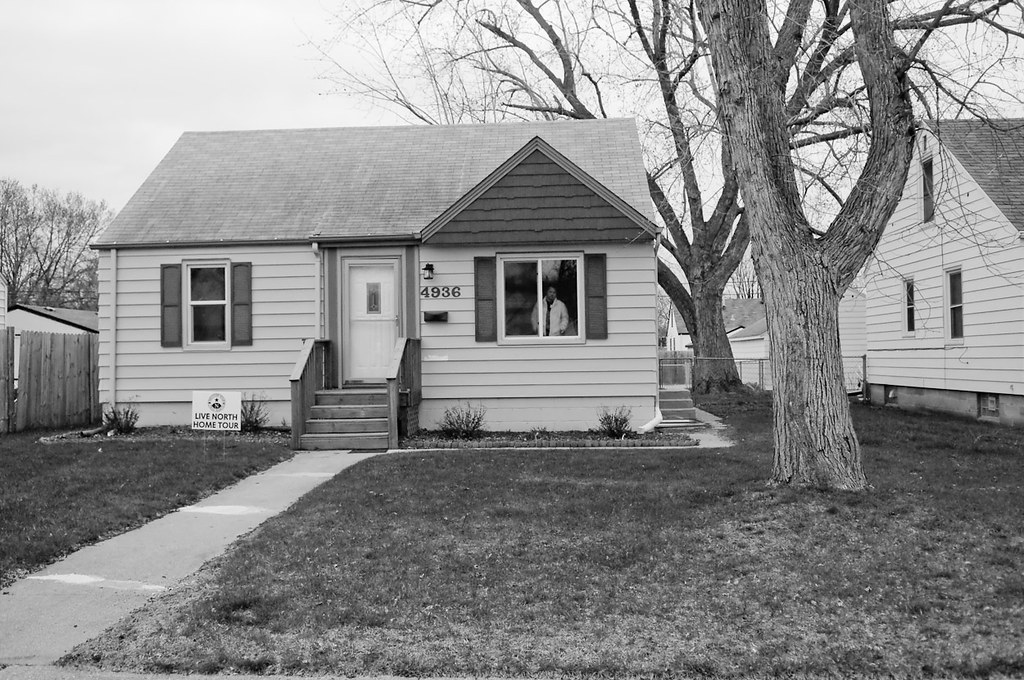 The first I got into was nondescript from the exterior. I just remember the realtors staring from the window. I think they were excited to see me. 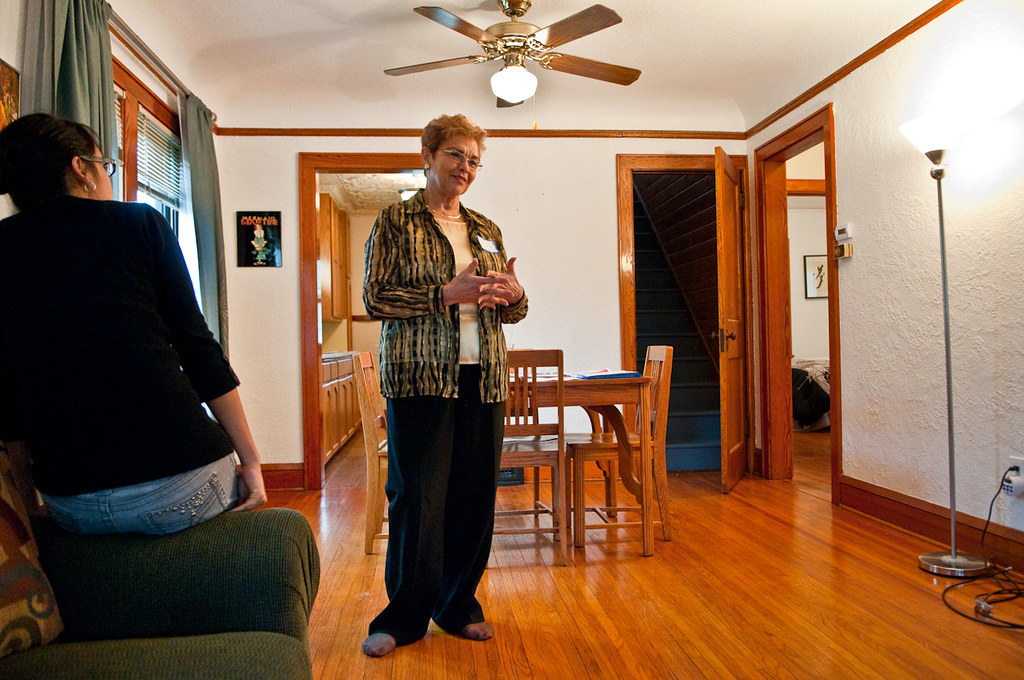 At the second home I had a nice conversation about the potential that North Minneapolis has with the realtor, Betty Cole. The house is quite the deal at $79,900. It even has a tin ceiling in the kitchen. 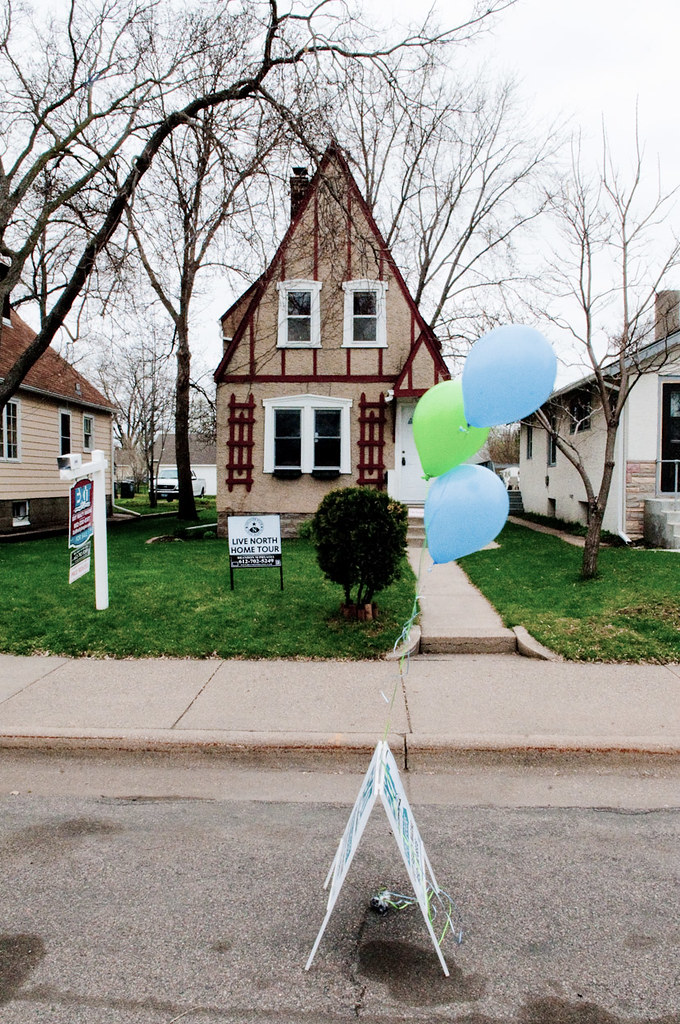 The last home on the tour was definetely the best. No more than 100 feet wide, this Tudor home was remarkable inside and out. 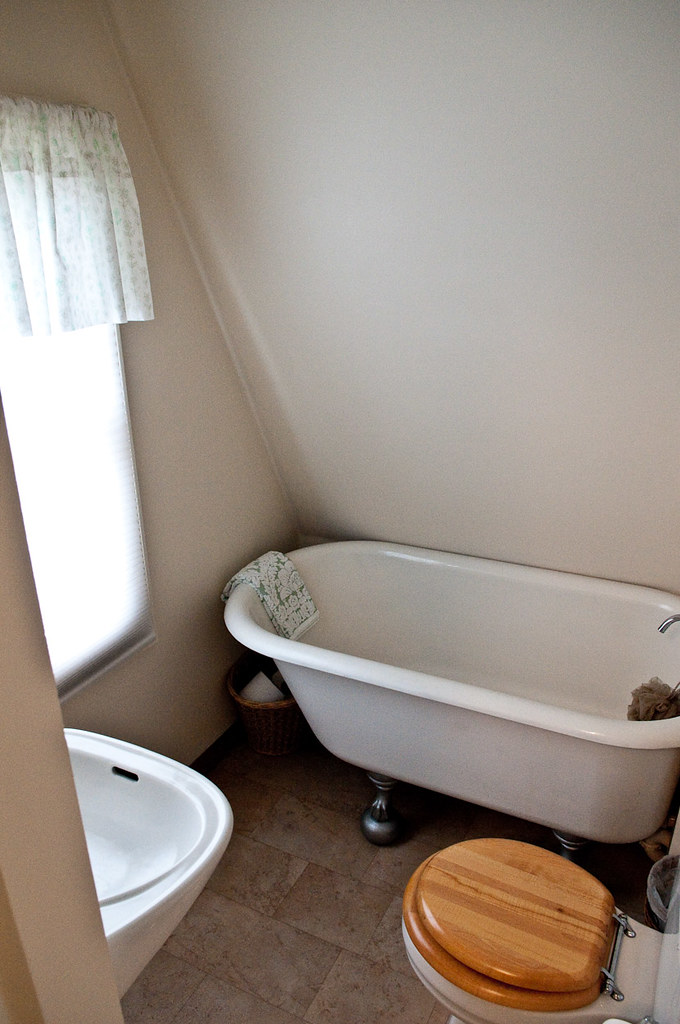 The clawfoot tub speaks for itself. 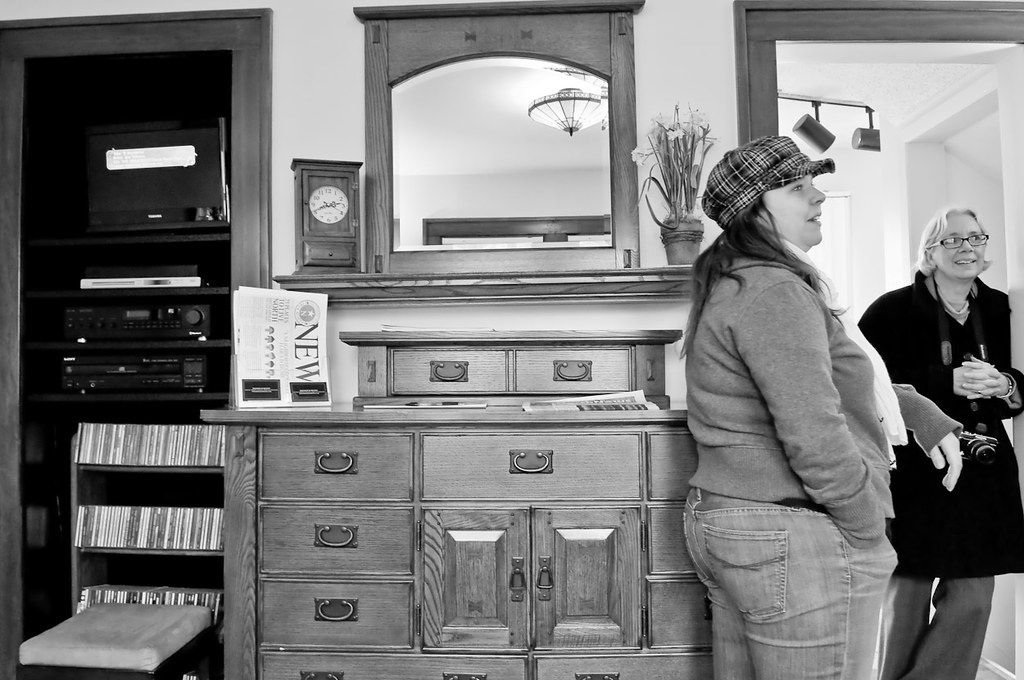 While I was chatting up the owner and her realtor, Brandon Pryatel, Margo Ashmore from North News fame showed up. It's funny how despite working as a journalist it's still exciting to meet the people who make your news.

I had to make it down to the Mayday festivities in Powderhorn so I headed home, picked up some warmer clothes for Brooke and biked my way down to South. 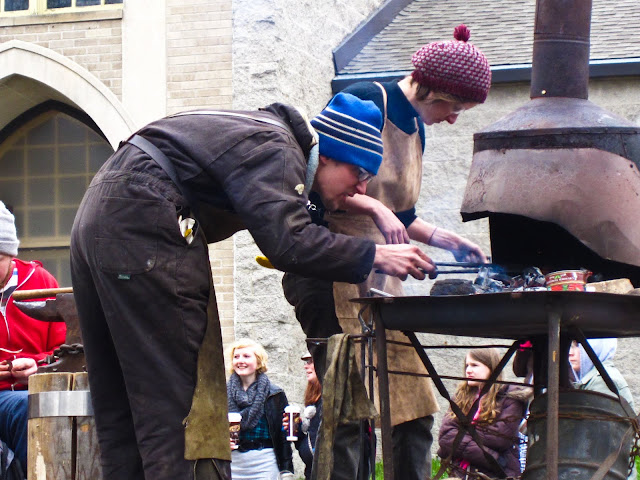 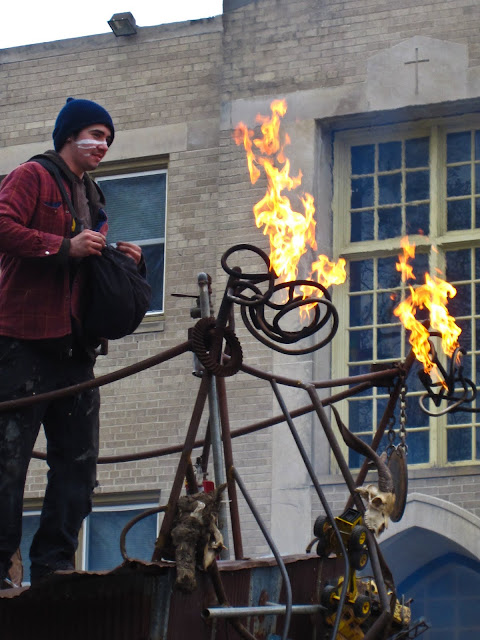 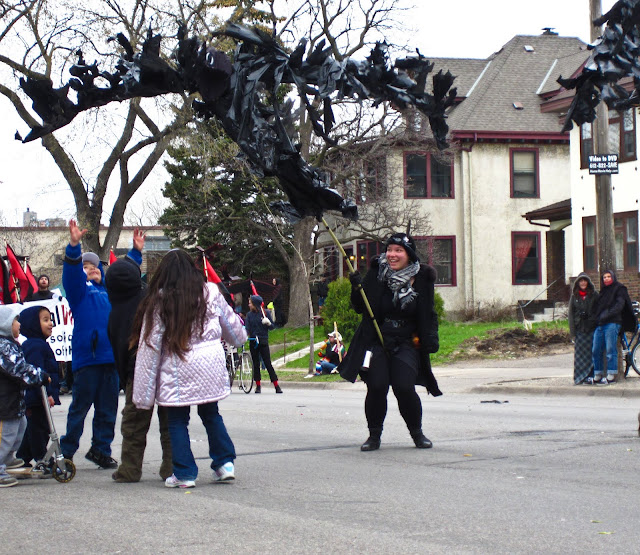 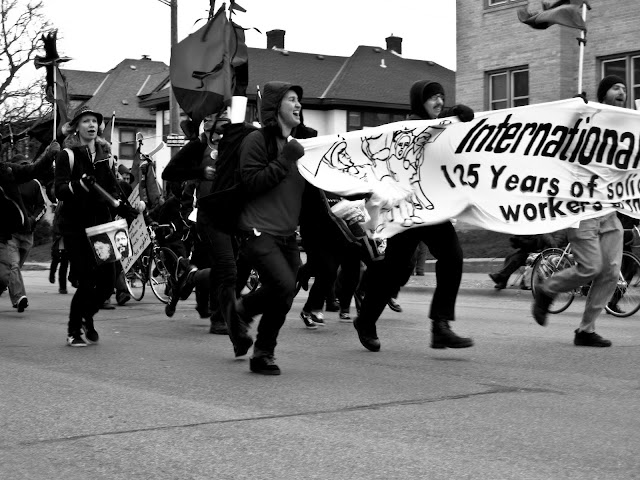 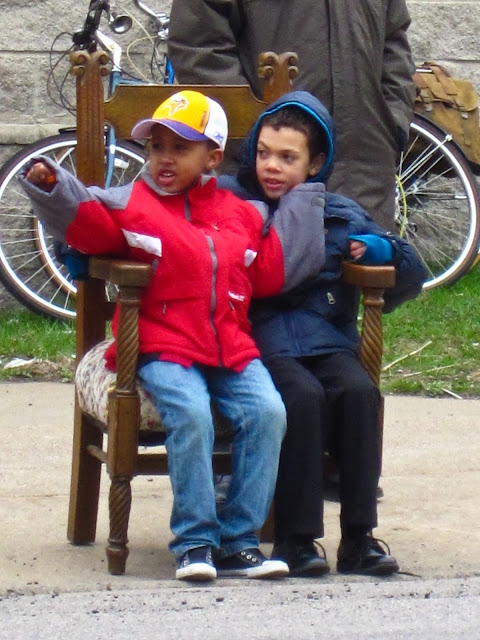 After the parade we walked over to Powderhorn Park for the Tree of Life Ceremony. Scott joined us at this point. For lunch we had tamales and tacos while watching the ceremony.
While Brooke and Blake watched the puppet show from atop the hill, I watched the crowd watching the show. I think my end of the theatrics was more interesting. 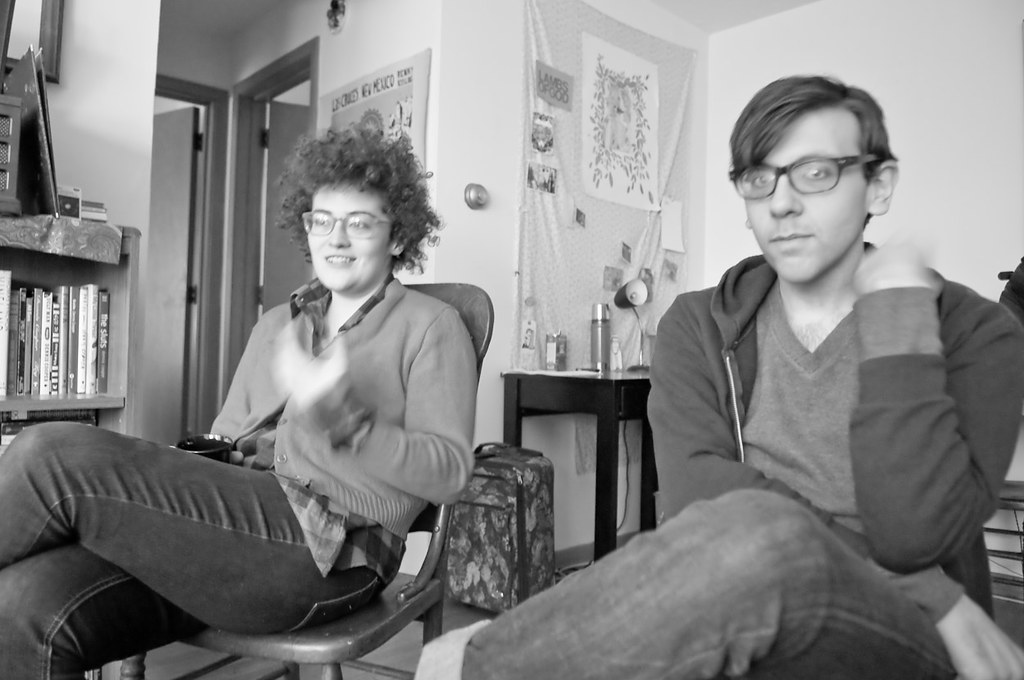 We then stopped by Monica and Ali's  for some coffee.

Ali and I had one of our classic music and politics debate. Some people would assume we want to kill one another, but heck we're just two curmudgeons having a good time. 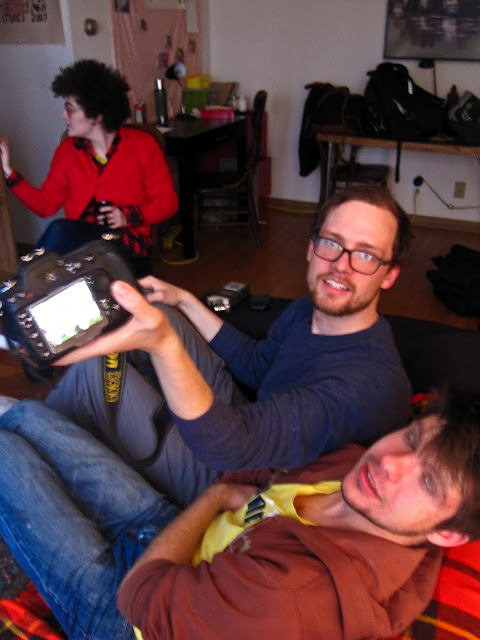 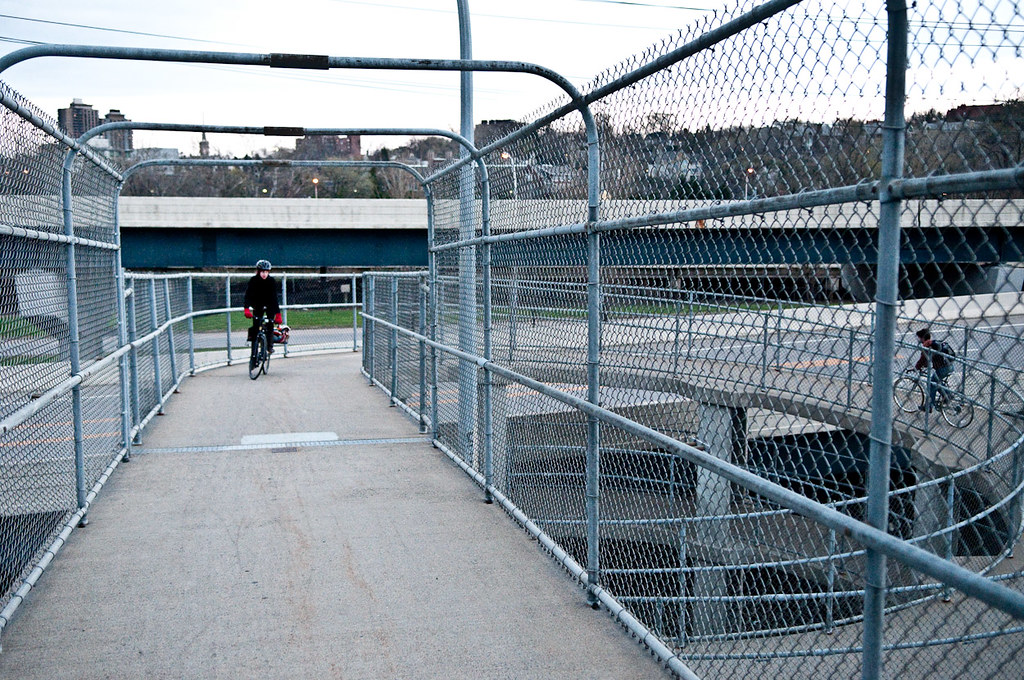 Once we left Ali's we had to bike back to North in the frigid cold. Brooke hasn't been biking much, so her body wasn't having it. Strangely in the pic above she's actually biking ahead of Blake.

Only because he had to stop and fix his bike. And because he's a nice brother and waits for me. 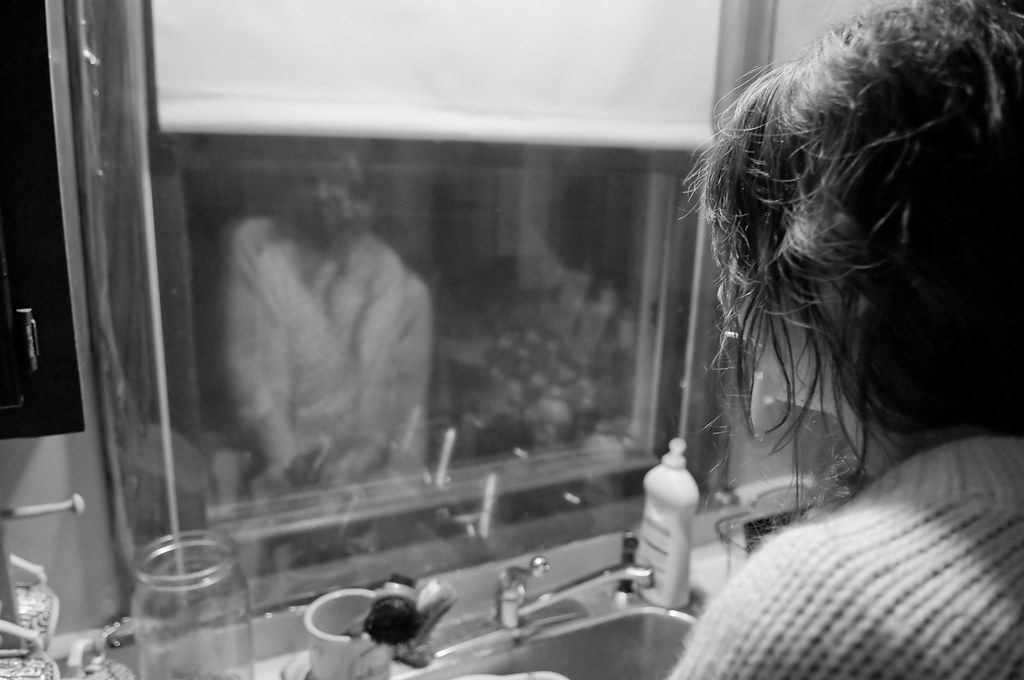 Once we got home Brooke started doing dishes. She's really good at washing pots and pans. 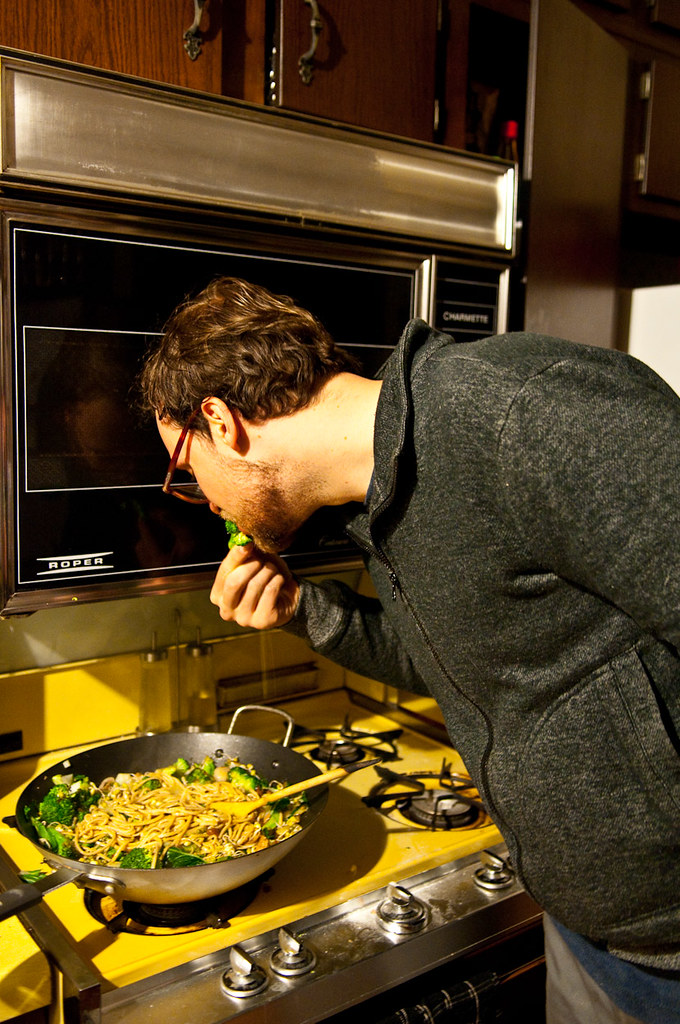 I'm really good at eating. My mom always told me that I'd be a gourmand, but hell, I'm a gourmet.

We had a broccoli and bok choy stir-fry with fried edamame on the side. 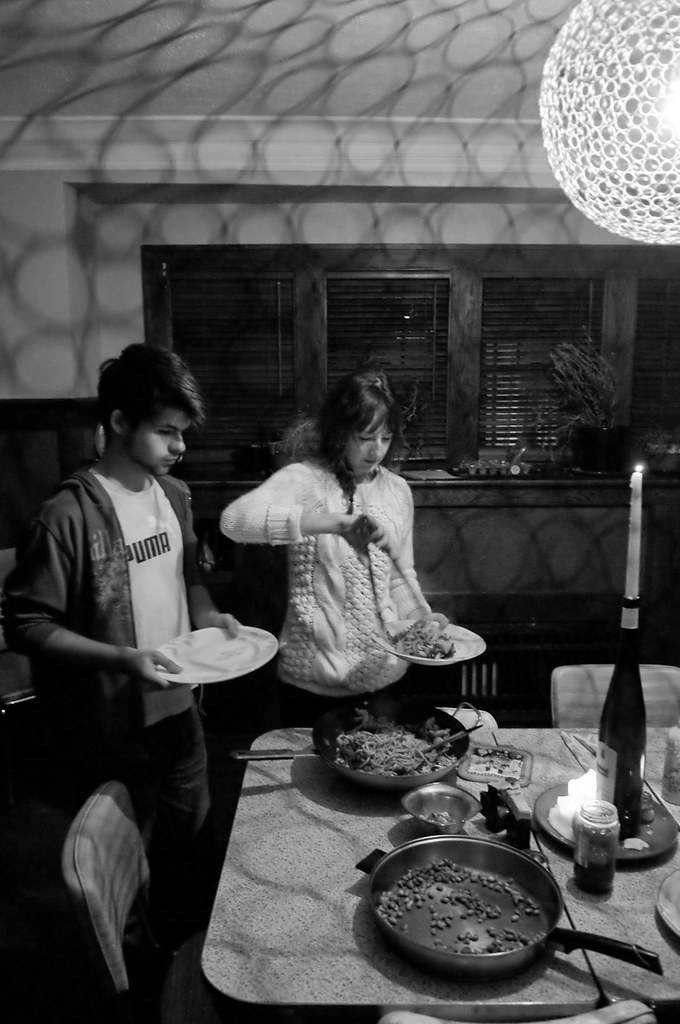 It all ended here. A late night meal. A good night's sleep.